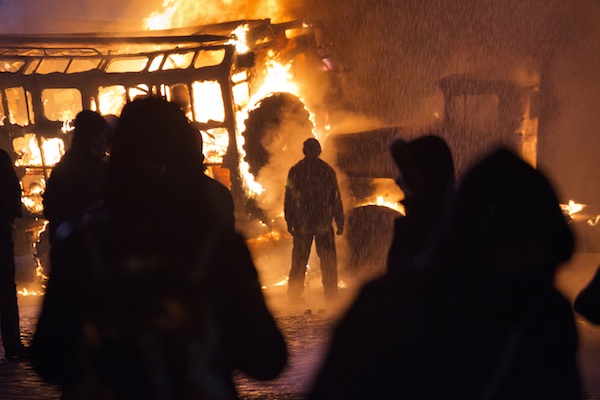 Tonight is the 35th Annual W Eugene Smith Grant in Humanistic Photography and Howard Chapnick Grant for the Advancement of Photojournalism ceremony was held at The School of Visual Arts Theatre. Founded in 1979, this prestigious event is held to support and honor those who make an impact in the photography world by capturing the human spirit.

© Joseph Sywenkyj, University students Sergey, 19, and Victoria, 20, a young couple from the eastern Ukrainian city of Dnipropetrovsk, embrace on Independence Square before Sergey heads off to Hrushevsky Street a short distance away where a street battle raged for a 4th day between demonstrators and police forces in central Kyiv. January 22, 2014.

Each year a $30,000 grant is awarded to a recipient that allows them to further complete their photojournalistic project. A panel of experts judges participants based on W Eugene Smith’s own 45-year career in photojournalism in which he was known for his compassionate dedication to his work. Furthermore, there is a $5,000 Fellowship recipient and a Howard Chapnick Grant.

© Moises Saman, Aleppo, Syria. March, 2013. A makeshift swing hangs inside a mosque that was occupied by Syrian Army soldiers near the civil war’s frontline in Salahaddin, Aleppo.

This year, there were 170 entries from 42 countries, making it a highly competitive award. Chosen as the best among these entries, Joseph Sywenkyj was awarded the $30,000 Grant from W. Eugene Smith Memorial Fund in Humanistic Photography for his work, Verses from a Nation in Transition. Sywenkyj project documented the lives of families that were tragically affected by the war in Ukraine.

Additionally, Moises Saman was awarded the $5,000 Fellowship from the W. Eugene Smith Memorial Fund for Discordia: The Arab Spring. This project depicted a four-year journey through Tunisia, Egypt, Libya, Iraq, Lebanon and Syria showing the tumultuous state of the Arab region.

© Moises Saman, Birqash. April 22, 2011. Animals for sale at a camel market held in a school in the village of Birqash on the outskirts of Cairo.

Lastly, Muriel Hasbun Received the Howard Chapnick Grant for laberinto projects, a collaborative arts and lens-based media that captured the history of artists working in Central America during the Salvadoran civil war.

© Muriel Hasbun, Janine Janowski photographed by Antonio Hasbun Z., with a portrait of her by Jane Ter Kuile behind her, circa 1970s.