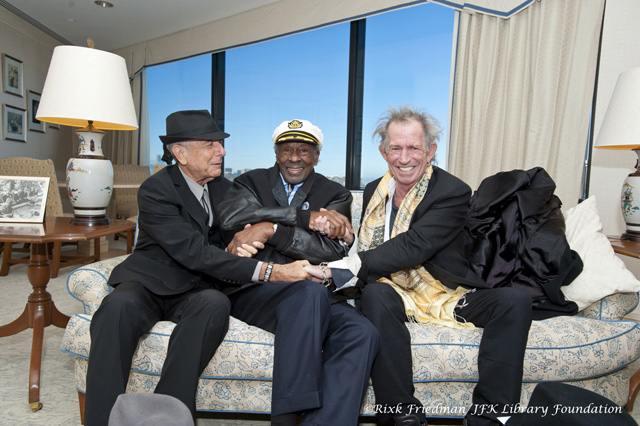 How To Get Great Light With On Camera Flash

I’m often asked the question of how to properly handle on camera flash?  After thousands of successful assignments I think it’s safe to say that I have a few tricks for getting great light with on camera flash. Here’s a few.

I like using my speedlights off camera whenever I can, but there are a lot of times as a photojournalist when I don’t have time, or space to set up off camera strobes.  Like when covering news events, catching spontaneous moments with politicians and celebrities, and making quick portraits.

I often bounce the strobe off a white wall or ceiling to direct my light.  I change my shutter speed to achieve good lighting balance and to add or freeze motion.  The speedlight is a small harsh light source, by bouncing the light off a wall, the ceiling, or using a light modifier you can take a small harsh light source and make it a much larger and softer light source.  By using one of a few small light modifiers like a Rogue Flashbender or a SunBounce Bounce-Wall with your on camera flash, you can greatly improve your speedlight on camera.  I use the Flashbender at events and the Bounce-Wall for quick beautiful portraits.

My rule for speedlight photography (on and off camera) is: set the camera on manual, and the strobe on TTL.   I use a Hoodman Loupe, to study my LCD screen.  It’s worth the money investment, especially under bright sunlight!

I photographed Keith Richards, Chuck Berry and Leonard Cohen at the PEN Literary Awards at the John F Kennedy Library.  In a situation like this always start your exposure with the element you can not control.  In this case it is the blue sky outside the window.   My camera was set on manual and my on camera flash was on TTL.   I used my camera’s light meter to read the sky outside the window, then I used my strobe to fill in my subjects.  My shutterspeed was 1/250 at f7.1.
I used a small Rogue Flashbender with my on camera flash to soften the light. The Flashbender is a small soft box you put on top of your strobe, that fits in your camera bag for on camera strobe!

When photographing in a room with windows you have be mindful of your strobe hitting the window (reflective surface). Either make sure the reflection of the strobe is behind your subject or move to the left or right, so you do not see the reflection.  At this event the only gear I had with me due to the size of the room was a Nikon D-800 with a super wide angle AF-S Zoom Nikkor 17-35mm f/2.8D, a Nikon SB-910 and the Flashbender.  The rest of the gear was outside in the hall. I shot this during Presidential campaign in NH.  I was behind the bar with President Obama and the Secret Service was standing right behind me.  There was no time for planning, it happened quickly and as a photojournalist you need to capture the moment.   You never know when you are going to be told by the Secret Service to leave the room, so work fast!  My shutter speed needed to be fast enough so that I could capture the President sharp, but slow enough that I would have ambient light in background.  My shutter speed was 1/40 at ISO200 & F 4.5.  I used a dome for this. 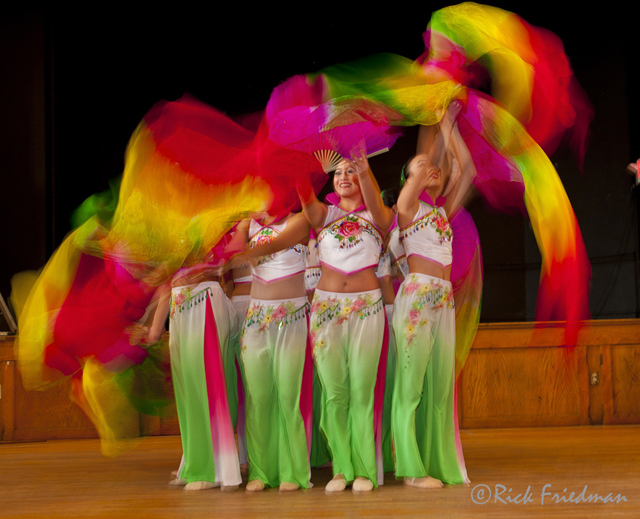 I shot this during Chinese New Year at a neighborhood community center.  I used on camera flash with a small Rogue Flashbender.  My shutter speed was slow enough so there is a feeling of motion in the scarf, but fast enough to freeze the dancers, who were standing still as they moved the scarf.  My shutter speed was 1/5 at ISO 200 & F 6.3 hand held. 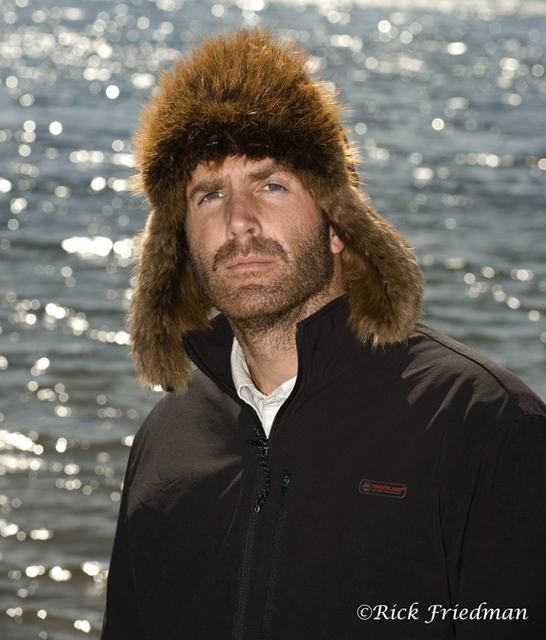 Adventurer and author Guy Grieve, was photographed at Walden Pond, in Concord, MA for The Guardian. This photograph is completely back lit, giving me the highlights on the water on  his hat and jacket as well as preventing a harsh light on his face.  I used an  on camera flash to fill in the light in his face.   My camera was set on manual and my strobe on TTL.   I used the light meter in my camera to read the water to give me my ambient exposure.  My shutter speed was 1/250 at ISO 100 & F10. 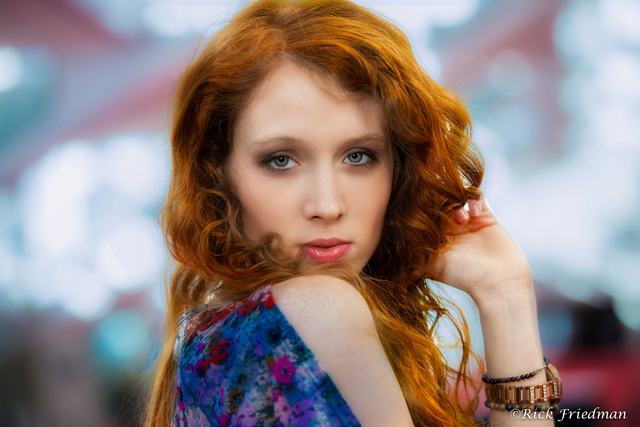 The light on the model in this photograph is from an on camera flash bounced off one of my favorites light modifiers, The Sunbounce Bounce-Wall.  The background light is available light.   I started my exposure with the element I could not control which was the background and I used the on camera flash to fill in the light on the model.   My shutter speed was 1/320 at ISO 200 & F4.  I wanted shallow depth of field, so my background was out of focus.

I shot this photograph in the lobby of a convention center before my presentation for Professional Photographers Association in Atlanta.  There was no pre-planning for the photograph.  We saw the backlight and created the image within a few minutes.   You can see my shoot with Bounce-Wall at Hasselblad Blog! 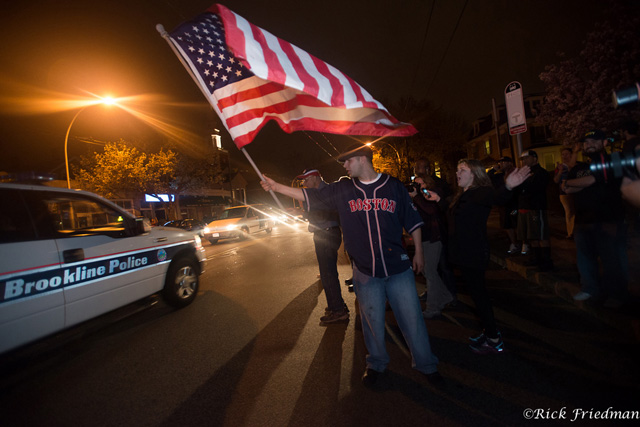 I shot this photograph in Watertown, MA after the Boston Bombings suspect was captured.  There were large crowds, many photographers and  many police officers.  I shot this photo with on camera flash, bouncing it off of a white satellite TV truck parked behind me.  This gave me a large reflector to bounce my on camera flash off of.  You want to bounce your light off of a white surface.  You will have a color change if you bounce your light off anything other than a neutral color.  My exposure for this was shutterspeed 1/50, ISO2500 & F2.8. 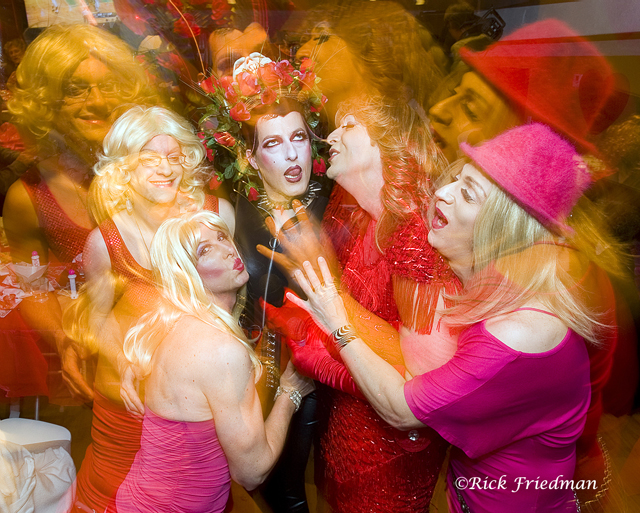 When you walk into a bar and they are hosting a drag bingo, and you only have an on camera flash, what do you do?
This is a 2.5 second exposure (@ F8, ISO 640),  hand held, while zooming the lens. The on camera flash only fired for about a 10,000th of a second, so some of this photograph is strobe and some of it is ambient light. The camera is on rear curtain synch (this is a topic for another blog).

I have many workshops and lectures coming up.  I’ll be at the Hasselblad, Rosco, ExpoImaging and Unique Photo booths at PhotoPlus Expo in New York,  October 29-November 1
Come stop by and say hi!

To see a complete list of my upcoming workshop, please visit my workshop page!