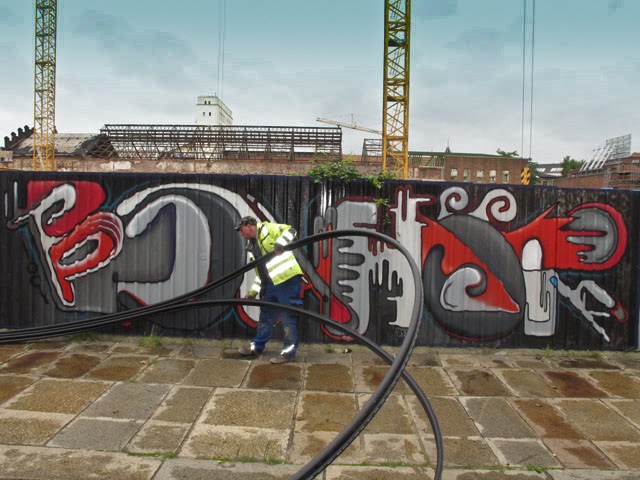 The Mural Project: A Rich Heritage Of Dresden Street Art

Most people come to Dresden, Germany, to revel in the massive structures, museums and monuments along the banks of the Elbe River, perhaps one of the more impressive riverside vistas in Germany. This was the home and playground of the royals, and a walk-around of the Zwinger, castles and palaces is impressive indeed. But should you get your fill of what some Dresdners call “Disneyland” and its rococo cherubs, self-aggrandizing and massive statues of the ruling class and their Teutonic mythologies, take a walk across to tracks to Friedrichstadt to immerse yourself in the city’s rich heritage of “street art.”

My guide for this sojourn was Danilo Hummel, himself an artist who is fully engaged in the art and the area and whose knowledge of the artists and their work is both personal and impressive indeed. Danilo organizes walking tours of the area and the art that covers everything from what I call “super-script” (classic graffiti composed of highly stylized letters and tagger logos) to “quick tags” (spray painted “I was here” logos) to five-story high murals. While much of Europe has its share of tagger art, the artists working in Friedrichstadt have taken it to a new form with purposeful collectives and collaborations creating impressive and artful “performances,” as they are called. 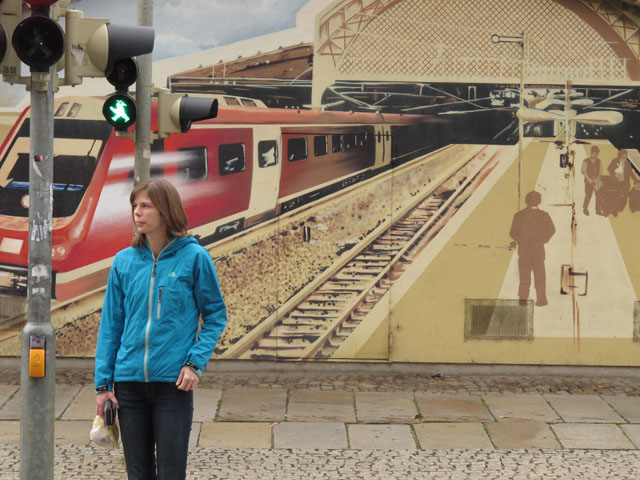 While in the Mitte, adjacent to and along the way to the heart of the tour, Danilo Hummel pointed out these “commercial” murals, all with forced perspective and that were like painted studio sets for commuters.   •Photo © George Schaub•

Dresden was among the many cities in Germany subject to massive bombing in the Second World War, with the firestorm here being particularly destructive to both structures and human life (see Kurt Vonnegut’s “Slaughterhouse-Five”). While the royal areas have been reconstructed, a portion of the Friedrichstadt area still has open fields and rubble walls, although reconstruction in the form of GDR apartments (what we in the States might call projects) and some art centers has taken place. The attraction to artists here is not new, with the area once home to “die Brucke,” the turn of the century German Expressionist group that included one of my favorite modern artists, Ernst Ludwig Kirchner. (On our walk we passed his home and studio, which for me was a thrill, although there did not seem to be more than a plaque on an old building to mark it.) 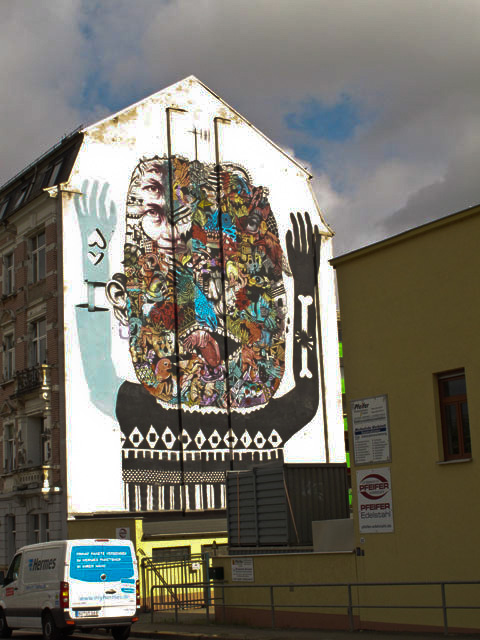 Untitled, by Saddo (from Bucharest) & Other (Montreal).   •Photo © George Schaub•

Those partial walls and fences surrounding rubble-strewn lots and building sites of course have become rich canvases for street art performances. These range from tags to very original works, all partially defined by the rough and inconsistent “canvases” and methods of application, which range from spray cans with adapted nozzles, brushes, rollers, stencils and, in one cases I later saw repeated in other German cities, fire extinguishers. There was some over-writing, or bombing of works, but not as much as you might think, as all the artists seem to know each other and while art is art, turf is turf.

A workman at a construction site with a strong graphic as context.   •Photo © George Schaub•

According to Danilo, the artists were at one time “illegal” and subject to arrest, but a counter-culture group, allied with various building owners and the Greens, argued successfully that bringing art to the streets, and especially to an area with such a rich artistic heritage, would both brighten the area and bring visitors—artists and tourists alike- to it.

To do this took a cooperative effort between artists and the local authorities, and funding from various artistic institutions. One of the main organizers of the project was Dresden artist Jens Besser, whose numerous works can be seen on building sides, fences and within alcoves throughout the area. Beginning in 2009, Besser invited muralists from across Europe to paint the walls of an old factory, and the collaborations that began there took shape in 2011/2012 under the title “RAUM CityBuilder.” 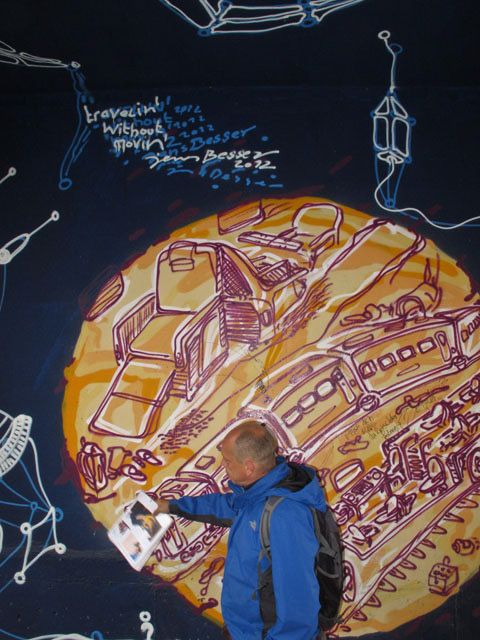 Dresden Street Art guide Danilo Hummel points out the details and tells the story of a mural in an alcove by Jens Besser.   •Photo © George Schaub•

As Besser wrote in his description of the project in a now out-of-print catalog entitled “RAUM CityBuilder, Collaborative Murals in Dresden-Friedrichstadt”:

“Murals are large size works. The time limit for the realization puts the artist under enormous pressure. That’s why it’s sensible to share this ground with another artist…to avoid reaching physical limits. Contemporary murals are developed further at the wall because a large size wall doesn’t correspond to a white (8 &1/2 x 11) sheet of paper.” In other words, the work in progress becomes a process that becomes integral to the work.

True, street art may be ephemeral and will certainly not last as long as the enshrined masters in the local museums here. Witness the recent destruction of what many regarded as a world-class display of street art on the building at 5Pointz, Queens by a gentrifying developer. But that temporary quality may add to its impact and create an awareness that, like life, it will come and go. And while it’s there, it’s there for all to enjoy. 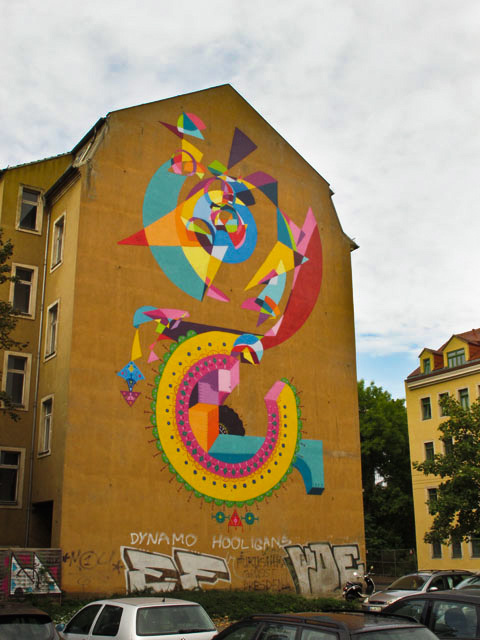 Untitled, by Kenor and H101 from Barcelona, some of the collaboration muralists invited to the city. According to a catalog description, both “traveled throughout Europe several times, thereby approved and unapproved murals arose.”   •Photo © George Schaub•

Contact Dresden Street Art walking tours here:  (And not to worry, the tour is conducted during daylight hours!)

POSTSCRIPT: After my visit to Dresden the street art community was rocked by the death of OZ, a prolific 64-year old tagger, who was killed in Hamburg on subway tracks while doing his work. I read this in the Guardian while having coffee at a street café in Hamburg, and when I looked up from the paper I saw a number of his tags, which I had first seen in Dresden, on concrete abutments along the busy Esplanade. The web of life is intricate indeed. 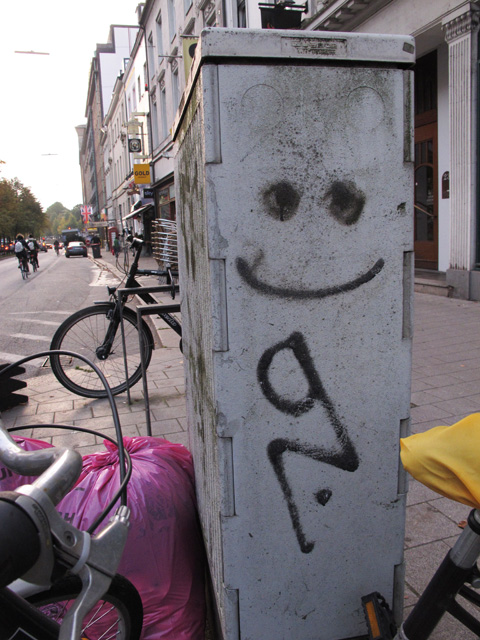 Homage to Oz: OZ, 64-year old Walter Josef Fischer, was one of the most prolific taggers in Germany, with some saying he created over 100,000 tags throughout the country. He was hit by a subway train in Hamburg, according to an article in the Guardian, with a “freshly sprayed tag and paint can found nearby.” I looked up from my paper at a street café in Hamburg and saw this tag, another, and another down the street. I messaged Danilo with my condolences and he sent me back a picture of a freshly painted mural honoring OZ, done that night in Dresden.