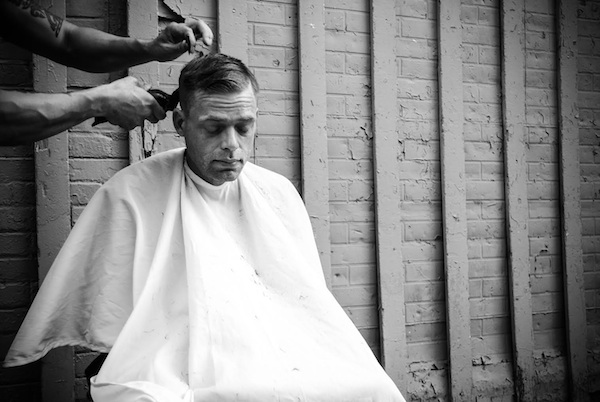 Devin Masga: The Photographer Behind Free Haircuts for the Homeless

Six years ago, San Francisco native Devin Masga picked up his first camera, not necessarily with the intent to become a professional photographer. He was simply influenced by the graffiti that surrounded his streets and wanted to create his own form of art. Since moving to Brooklyn two years ago, Masga turned a hobby into a serious desire to become a photographer. He still remains deeply influenced by what he sees and finds on the streets. “It’s real life. It’s every day people. It’s stuff you might not see everyday or it’s stuff you do see everyday, and it all happens right in the moment. It’s grimy and, yet, it’s artistic,” Masga said.

Through a string of mutual acquaintances, Masga met Mark Bustos a, perhaps, unusual person to help him gain recognition for his street photography. After all, Bustos isn’t an artist; he’s a hair stylist. But last May, Bustos traveled to his native Philippines and decided to give free haircuts to the needy. He bought that unique form of charity back to NYC, giving haircuts to the homeless every Sunday. You’ve probably heard of his campaign before: #BeAwesomeToSomebody. Bustos has gained a tremendous amount of social and news media coverage for his beautiful acts of kindness.

“A lot of homeless people tell us that they don’t get noticed, that they’re invisible. They tell us it makes them go crazy, and when we first approach them, they’re very closed off. But we talk to them on their level–which is something they need–and by the end they open up so much,” Masga said of how something as simple as a haircut can help change a person.

As you might have guessed, this project isn’t a one man team. Bustos gives the haircuts and his girlfriend hands out care packages, filled with food and drinks, among other basic care needs. And of course, there’s Masga, the photographer behind all this, capturing each moment on his Nikon D3000. Arguably, you could say he’s one of the most important contributing factors to this project. After all, without his photographs, how would the world be witness to Bustos’ haircuts that challenge others to be awesome to somebody?  Masga’s photographs, as photographs often operate, reach different corners of the world and spread the message.

When Masga’s employer, Blick Art Materials, decided to set up an exhibition to display his photographs–the first time they have ever been on display–as a means of support, he was grateful. “A lot of pople don’t care at all about homeless people; they walk right past them. I just want to get the word out and inspire people to give back to them. The event will help bring awarness to the fact that these people are human, just like us,” Masga said.

Furthermore, the pair hopes to one day raise funds to travel to different parts of the world to give out even more free haircuts to the homeless. “Mark and I have a goal to spread goodness and to give back to communities. We want to raise enough money to travel the world and spread that goodness everywhere,” Masga said.

"Nobody can do everything, but everyone can do something." ?????@markbustos #BeBlessed #BeInspired #BeAwesomeToSomebody #NYC

Where they plan on going first is still up in the air, however. “Mark wants to go the Phillipines. But I want to go to Africa, and in general, to places that are completely different than NYC. Either way, when we’re able to travel around, it’ll keep us motivated to help other homeless people and communities. It’s a transformation for them physically and emotionally. I hope we can gain more supporters and inspire others to do good deeds.”

The exhibition will be held at the Blick Art Materials’ store at 650 6th Avenue (at 20th Street) on Monday, November 24th at 6:00pm. The event will run through December. Below are some of Masga’s photographs that will be on display. All photos were used with permission. 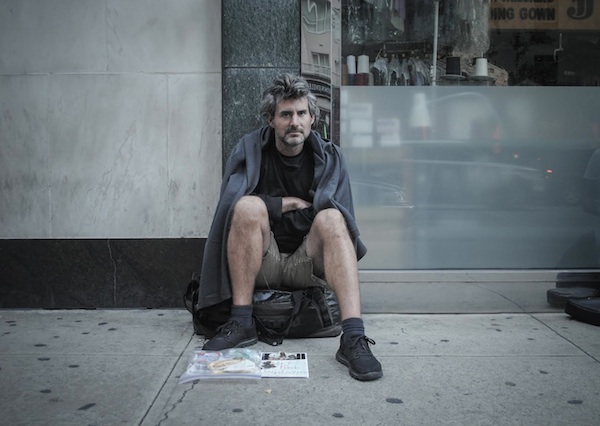 “When Mark and I first approached Joe, he was banging his head against the wall; it was clear to see the guy had hit rock bottom. He has a sign that said he “felt like a dead corpse,”.” 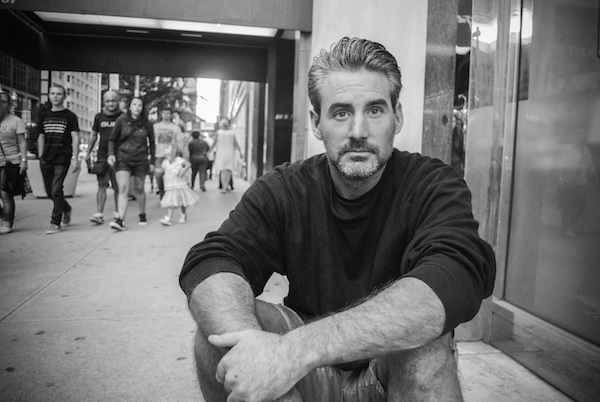 “Mark offered him a haircut and we bought him food. He was shocked by all the free offerings, but he knew exactly what he wanted–a pizza supreme and a coke. Makes you think about how long he’s been dreaming about that mea. By the end, he told us he no longer felt like a dead corpse.”

“Mark and I went out yesterday and found our friend David in the Lower East Side.” 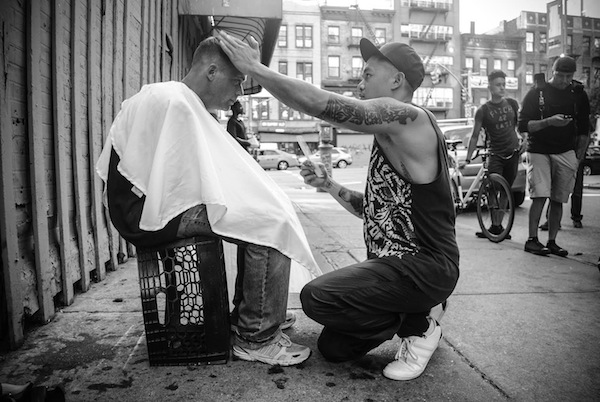 “Mark had to lace David up with the classy haircut again.” 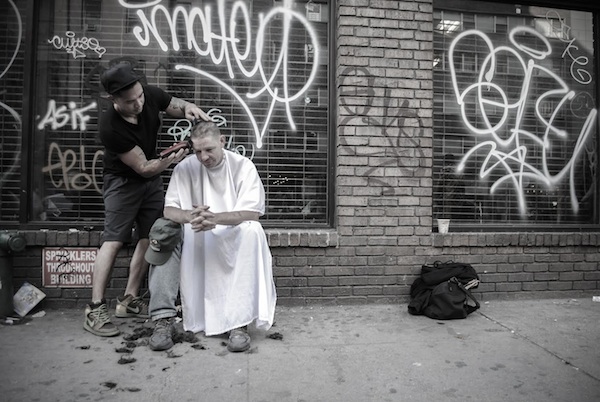 “We met Bill in front of a 711. He was telling us that he got a divorce about a year ago, and he turned to drinking which landed him on the streets from all the distress. You can tell Bill had a great heart; it was just a rough time for him in his life. I shake his hand and say hello every time I see him on Broadway now.” 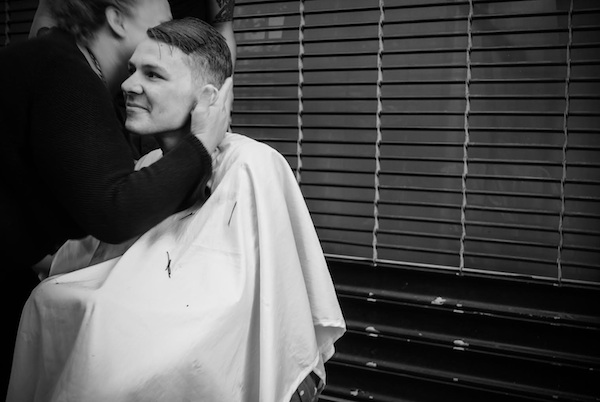 “I met Zach on 14th Street. He was the most humble kid I ever met for being homeless. After his haircut and hearing about his life, he told us that he felt great, not just physically but emotionally.” 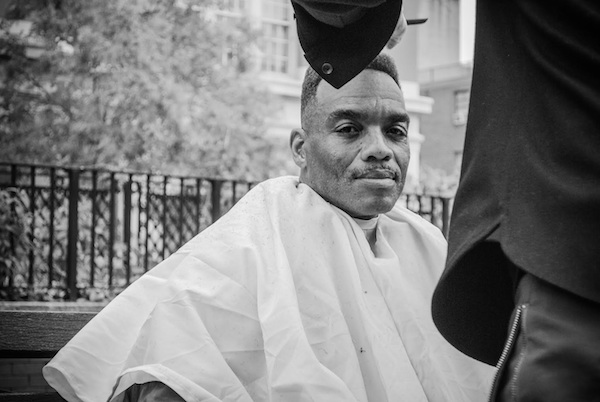 “When we met David this past Sunday, he had the most positive vibe and uplifting attitude about everything he was telling us.” 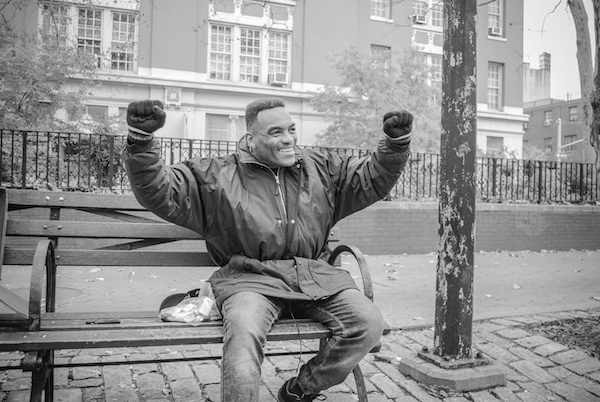 “He reminded me of somebody straight out of the 80’s from his clothes to his after haircut.”