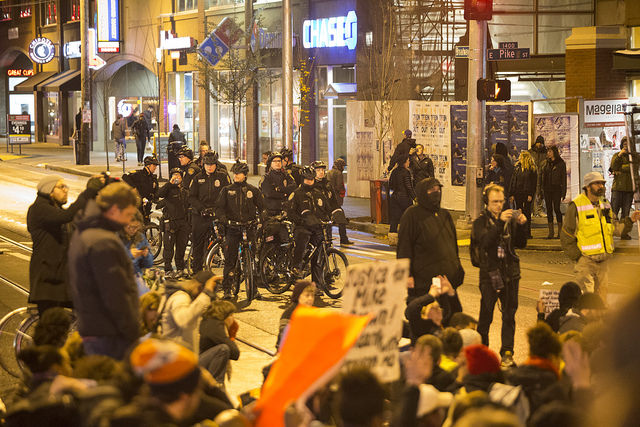 Earlier tonight, Nov. 24, a Ferguson, MO grand jury ruled against the indictment of Ferguson police officer Darren Wilson for the shooting and death of Michael Brown. By now, mostly everyone has realized the city has erupted with protests, gunshots and looting, which, of course, has been combated with tear gas and flash bang canisters, according to a series of Twitter updates and graphic Vine videos. Even here in New York, protestors splattered NYPD Commissioner Bill Bratton with fake blood, while Oakland, CA protestors allegedly gathered into a crowd spanning several city blocks. View the nation’s riots and protests through photos, Tweets and Vines.

The Beauty Town building, the same building as the #HealSTL office, is on fire. pic.twitter.com/WGdfSUi8YJ — Antonio French (@AntonioFrench) November 25, 2014

Check back for updates and see more of the live stream via Reddit.