CHRONICLE is an online series where we’re uncovering long-forgotten print stories from our dusty hard drives and archives. This story first appeared in the Fall 2009 Issue of Resource Magazine. Visit the Resource Shop to pick up the latest copy.

How can a bottle be a muse? How can a bottle become so iconic? As the illustrious ads suggest, in an Absolut world, the answers are simple and witty. But to the collaborative minds behind the ad campaign, providing those answers takes a lot of work. 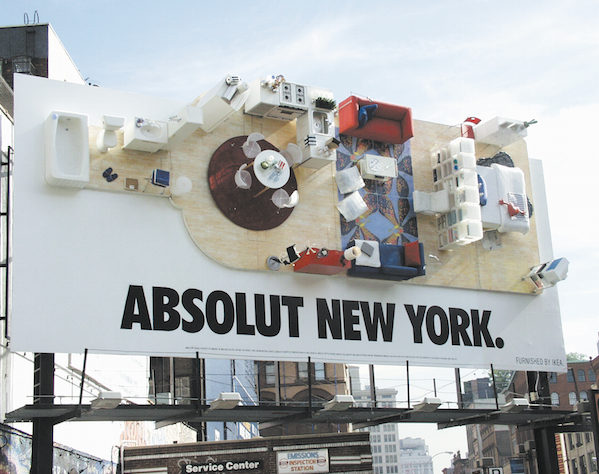 It’s just a bottle, but it’s so much more. When the first print ad appeared in 1980, the idea was simple—an image of the product with a glowing halo hovering above, and below, the words: ABSOLUT PERFECTION. Nothing else. No group of friends sharing a laugh. No distinguished gentleman sipping his cocktail at a lavish bar with a beautiful woman. Just a bottle, one allusion, and two words. The message seemed to be: ”This is it—this is all you need.” Who knew this seemingly simple ad would cause a revolution within the advertising world? And yet it did. 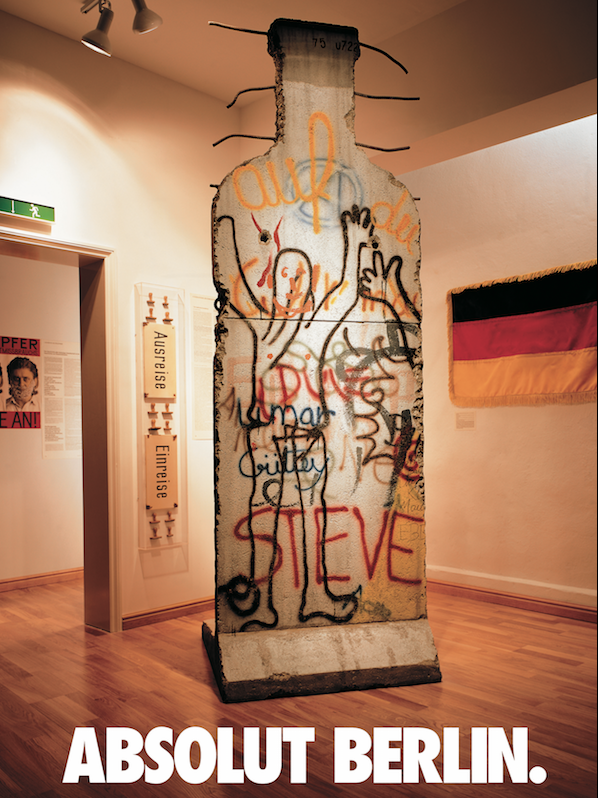 Behind the scenes, before all the success, art director Adman Geoff Hays of TBWA was asked to come up with a campaign for a new Swedish vodka that had just landed in the States. Considering the strict guidelines from the Absolut execs in Stockholm, Hays had only to work with the bottle. The ads had to reflect the modern day while being classic and couldn’t be associated with any specific lifestyle. It’s hard to believe that such creativity could be born from such mundane direction, but the result, as we know, was perfection.

The brilliant idea was Hays’s alone, but he could not have done it without the distinctive bottle, which has its own unique story. In the late 1970s in Sweden, as the vodka brand was about to break stateside, Absolut needed to package its product in a way that reflected both the tradition of the hundred year old recipe and the modern world. The task was arduous and ended in many failed attempts. Then, one day, a marketing team member happened to see an old Swedish medicine bottle sitting in an antique shop window. The bottle was simple, uncomplicated, and very Swedish. For more than a century, the design of an apothecary bottle remained unchanged. Staying true to its roots (in the 16th and 17th centuries, vodka was sold in pharmacies as medicine to cure numerous ailments), Absolut selected the bottle as its model. The final bottle design blended traditional Swedish glass-making with the best of contemporary design. 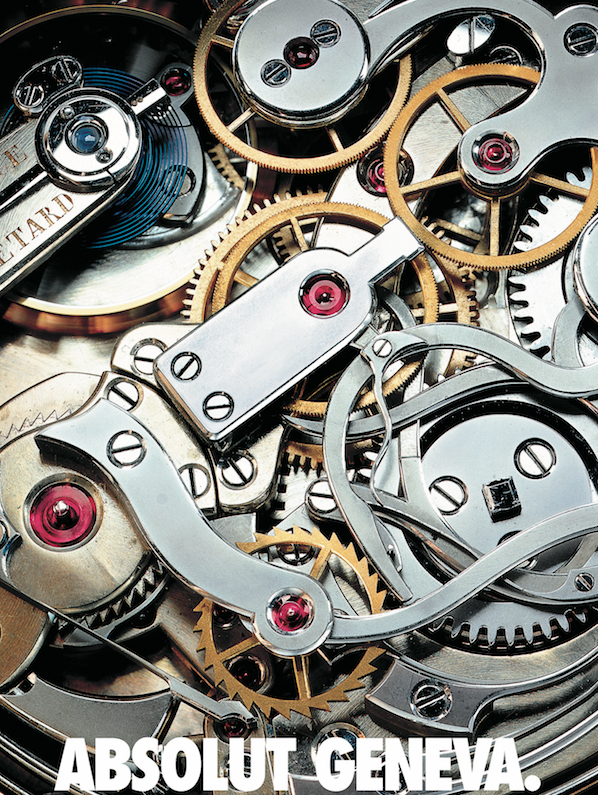 The Absolut bottle had a unique shape that attracted people, and it became a modern icon in itself. It was only natural that ads focusing on the bottle followed suit. And follow they did. After the success of “Absolut Perfection,” the subsequent ads replicated the same formula. Richard W. Lewis, author of Absolut Book and Absolut Sequel writes, “While the Absolut advertising campaign has 2,000 faces, it’s still a singular idea. A big Absolut bottle. A two-word headline starring ABSOLUT and finishing with a word that denotes a state of excellence, a mood, a place, a person real or imagined, a powerful linkage to the arts…or anything else I might have forgotten.” In other words, there was no end to the possibilities—just more opportunities for the spirit and the ads to serve as a muse and inspire. 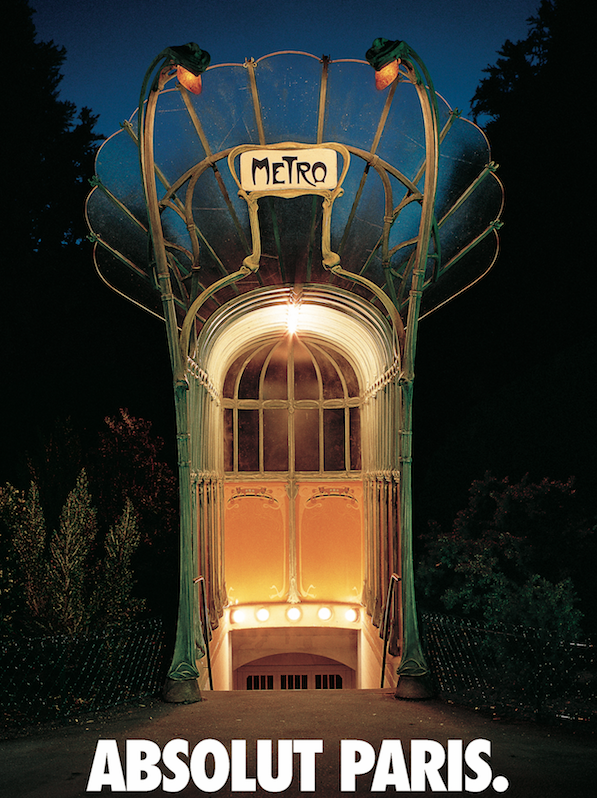 From art directors to painters and fashion designers to authors, Absolut has inspired people to create ads that have become legendary. The brilliance of the campaign has never faltered since its earliest form when the craze began. In 1985, Andy Warhol was commissioned to do a painting of the Absolut bottle. When the ad was printed, it was an instant sensation, catapulting Absolut into the spotlight. Sales skyrocketed and interest in the brand grew. It was the first time that the line between advertising and art blurred—or that the two merged. Artists wanted to be part of the campaign because Absolut offered something new and fresh—another outlet for their creativity and a way to reach a massive audience. The list of artists who have contributed to the campaign reads like the VIP guest list to the world’s most desirable party: Damien Hirst, Keith Haring, Jean-Paul Gaultier, Gianni Versace, Helmut Lang, Manolo Blahnik, Herb Ritts and Annie Liebowitz. 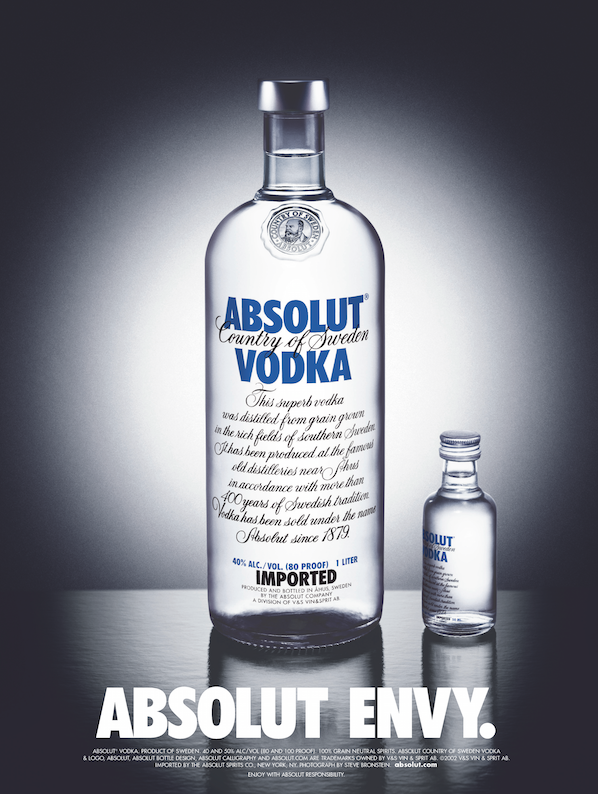 While Absolut earned its place in pop culture, behind the scenes were people who worked tirelessly on the ads. One such person is Steve Bronstein, the photographer of the Absolut campaign since its inception. TBWA would create the concept and it was up to Steve to realize it. “Sometimes [the execution] would deviate significantly from the original preconception, sometimes not. There was often considerable flexibility in the interpretation of the original idea, though it did vary depending on the particular creative team working on the project. Sometimes the illustrated concept was done in a feasible matter, sometimes not. I always looked for a way, if I could, to make it better.” As time passed with one successful ad coming after the next, the TBWA creatives grew to look to Steve as a collaborator more than as a vendor. 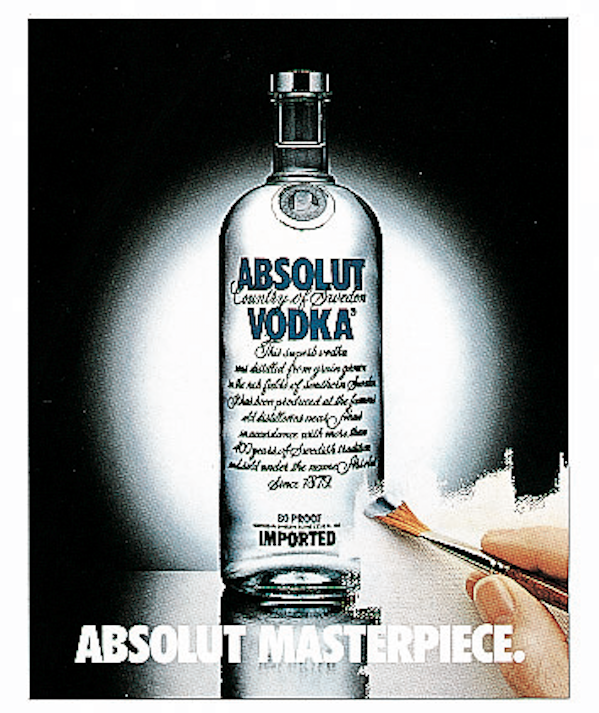 As magical as the ads appeared on print, a lot of work went into each one, especially when sets were needed to execute the idea. Enter Mark Borow of McConnell & Borow, inc./PropArt, master set designer and model-maker. “Steve and I would usually have a meeting with the creatives at the agency and then I would develop the layout to ‘work’ for the camera,” recalls Mark. The creative process included sketches, plan drawings, and mock-ups, which were reviewed and revised until approved by the agency. “I’ve done hundreds of jobs with Prop Art,” says Steve. “I understand their process and I know what they do best. We brainstorm and plan throughout the project. It is always a question of highlighting the strengths of a prop, and disguising or de-emphasizing its weaknesses.” Together, Steve and Mark created some of the most memorable and realistic ads of the campaign—mainly those in the Absolut Cities series, including Absolut Miami, Absolut LA, and Absolut Hamptons, which is one of Steve’s favorite visuals. The boardwalk for Absolut Hamptons was a miniature set shot with a forced perspective. The set wasn’t so “miniature,” though—it occupied a space of about 20’ x 30’.

The production didn’t come without challenges. For Mark, almost all of the ads he worked on were demanding in one way or another. “I was asked to do things I had never done before, so it was always new and different. Some of the incredibly detailed miniature sets really grabbed me. Absolut Louisville and Atlanta were two of the more intricately detailed sets we did.” These ads are regarded as two of the most realistic looking of the Cities series. Getting the details just right was a big challenge since they would consequently determine whether or not the image looked realistic. “We brought in the architect Gary Rosard to help design some of the buildings for Absolut Miami. We used new materials and techniques for many of the projects—resin for casting lemon peels, metal etching for the Absolut Intelligence computer circuits; we hand-carved 40 little snowflakes for the Absolut Warmth. But the biggest challenge was always timing. Schedules were short.” 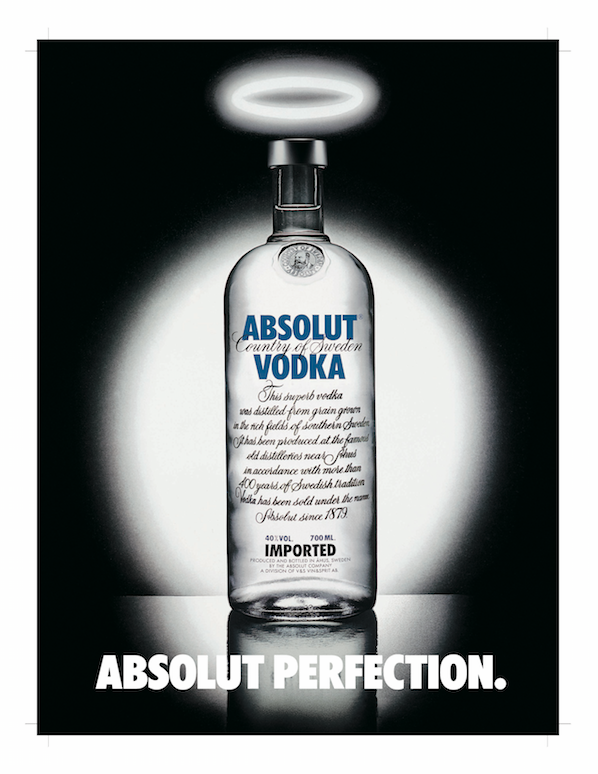 The challenges, and definitely the work, didn’t stop at the sets and props. Prior to the shoot, Steve would mockup the set to work out the lens perspective and scale. He would also oversee the design and construction of the set or prop which would take anywhere from one to five weeks. Once the set was complete, it was brought into his studio for a pre-light day. Depending on the complexity of the set, one or two shoot day would then be needed. Steve was also involved in postproduction, doing a rough execution, and then supervising the final digital work.

Ever wonder what happened to those amazing sets and props? They all went back to Mark. According to the law, all props and miniature sets belong to the artist unless paid for by a separate fee, but since most of them were made only for the camera, with the edges and back left unfinished, the client didn’t want them. “I always got the props and sets back. Some I saved and put on display or put into storage. Others I dismantled and reused what I could and got rid of anything that I couldn’t use.” Some of these iconic pieces of advertising history have also been sold at Christie’s Pop Culture Auction in June 2009.

The Absolut ad campaign is the longest running print campaign in history. Together, the agency creatives, Steve and Mark, and the hundreds of other artists, musicians, fashion designers and more have created nothing short of magic. We’ve grown up seeing the profile of the bottle used to re-imagine the Boston Tea Party, Benjamin Franklin’s spectacles, a zebra’s stripes, and a Jersey diner, among thousands of other visuals. People became fascinated with the campaign. The ads were seen as a separate entity from the product—items to collect, to covet, and with which to plaster one’s dorm room walls. But consumers weren’t the only ones to take notice of the campaign. Absolut Vodka became newsworthy with each new ad, garnering media coverage, and it has been the subject of two highly successful books. Praise for the campaign also came flooding in from the advertising community. The campaign has won more than 400 awards, including the most coveted prizes in US advertising business—the Effie and the Kelly awards. Absolut is also one of only three brands inducted into the American Marketing Association’s Hall of Fame alongside brand giants Coca-Cola and Nike. And in 2002 Forbes magazine called it the world’s biggest luxury brand, ahead of BMW, Tiffany, and Gucci. 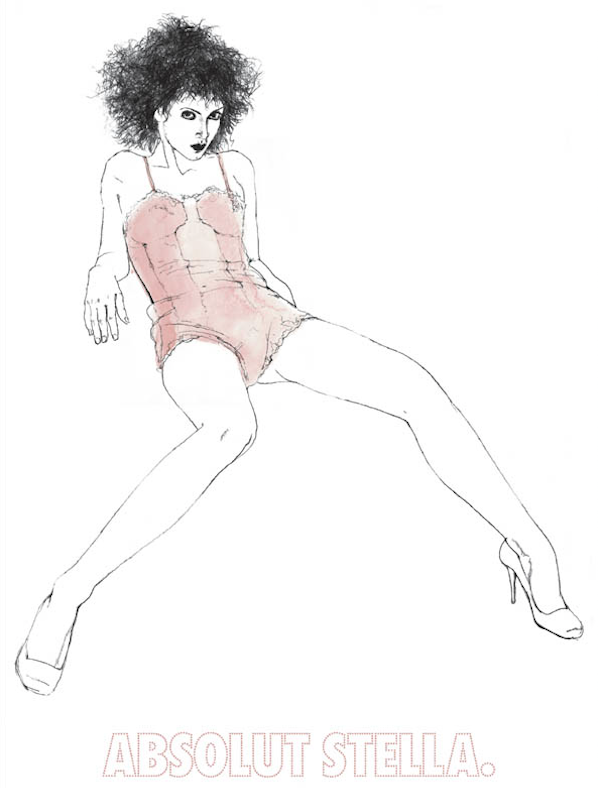 Since the first Absolut ad debuted nearly thirty years ago, the brand has become synonymous with ingenuity and creativity. Absolut continues to produce innovative advertisements that make us chuckle, look twice, and think a little harder. Just launched, the new campaign is “Anthem”, a visionary TV commercial that captures the essence of the brand’s claim as a pioneering and culture-shaping brand.

Still, it is the iconic ad of the Absolut bottle in a familiar setting that will forever burn brightly in our memories. “I’ll always be grateful for having had the chance and experience of working on one of the most iconic advertising campaigns of the last thirty years. It taught me a lot and opened many doors professionally and socially.” Mark Borow’s words resonate with the ethos of the Absolut brand in which everything is possible and new, where a glass bottle can be a muse and inspire us to create. And to that, we toast.