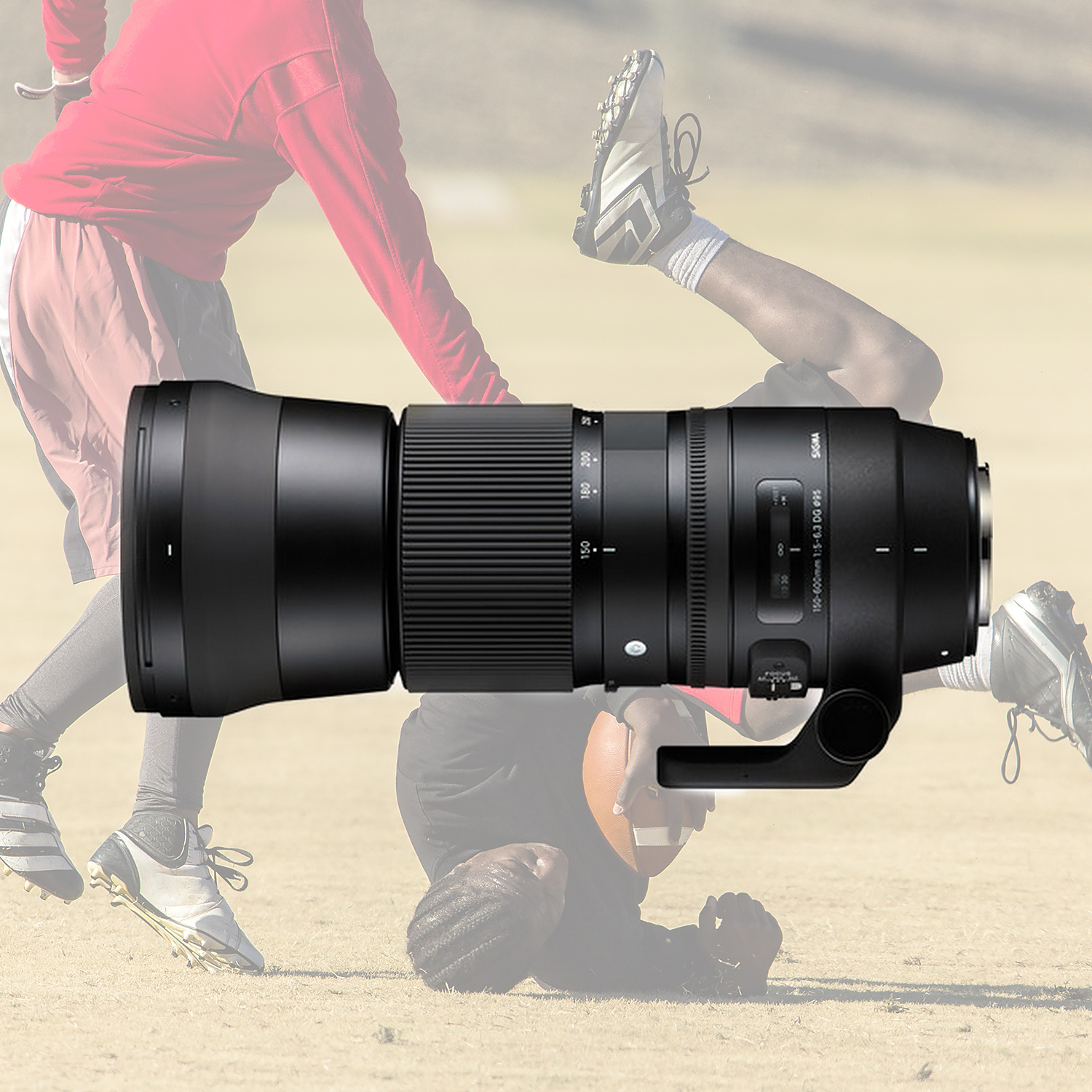 Sigma rolled out a beast of a lens earlier this year and I was finally able to take it for a spin at home to see how it would perform outside a conference room floor. The new Sigma 150-600mm f/5-6.3 DG OS HSM Sports lens did not let me down. The build, focus speed, sharpness, versatility and even the price were all determining factors that this lens would be a perfect addition to any photographer looking for the advantage in sports or wildlife photography.

Let me preface this review by saying while I enjoy reading lens reviews full of test information and cool graphs showing me the sharpness at different f/stops, this will not be one of those. Instead of shooting with the lens in a controlled environment I thought I would test it out how it would be used in the field. I was especially looking forward to taking it down to the sideline of an NFL game but unfortunately my hometown Arizona Cardinals were out of town both weekends that I had the lens in my possession. I decided to hit up the next best thing; two-hand touch Turkey Bowl pickup football game of the town locals on Thanksgiving morning. 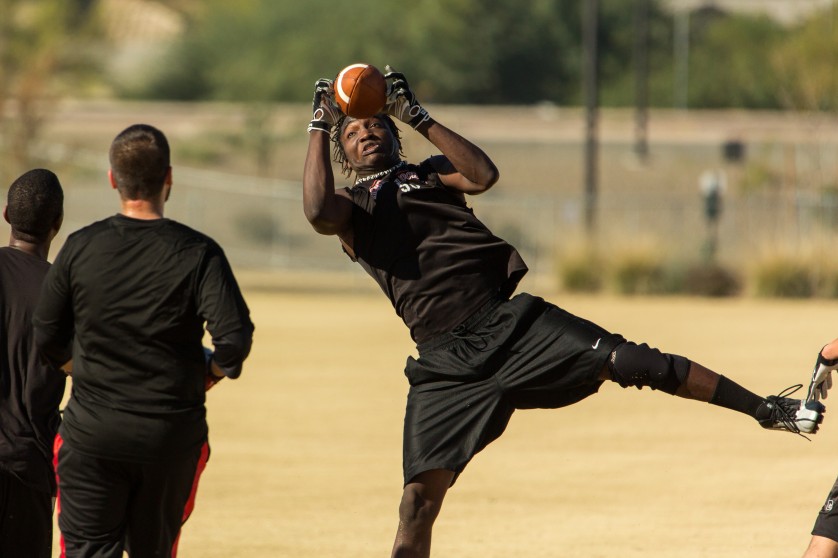 As I mentioned in the introduction, this lens is built like a beast. It is full metal outside construction including the lens hood and tripod collar. It is dust proof and weather tough to protect the 24 lens elements in 16 groups inside the casing. (Here’s a great video I found on the lens that illustrates the dust and splash proof feature that I thought was entertaining. Due to privacy settings on the video we couldn’t embed it here.) Sigma also coated the front and rear glass with a protective coating to help repel water and fingerprints. It weighs in at a little over 6 lbs and while manageable without a monopod or tripod after an hour of shooting with it outdoors, I was wishing I had brought mine.

Two things that are of utmost importance to me while shooting sports is the speed of focus and the optical performance. At a price of just $1,999 I wondered if the Sigma had compromised on either of those.

In fact, this lens produced incredibly sharp images through the entire zoom range from center to corner and did so while locking focus using their autofocus technology. Not only was the focus quick and razor sharp but it was also quiet. The lens includes two optical stabilization modes, one for general photography and the second for panning either vertically or horizontally. I can see that second mode would be especially ideal for motorsports though I didn’t get a chance to experiment with it. Optically the only complaint I might have is a slight vignetting in the corners. Fortunately Lightroom has already updated their lens profiles to include the Sigma 150-600mm and so by checking a box that is fixed instantly. Ultimately I would rather take a little bit of vignetting rather than have them sacrifice sharpness in the corners of my photos. 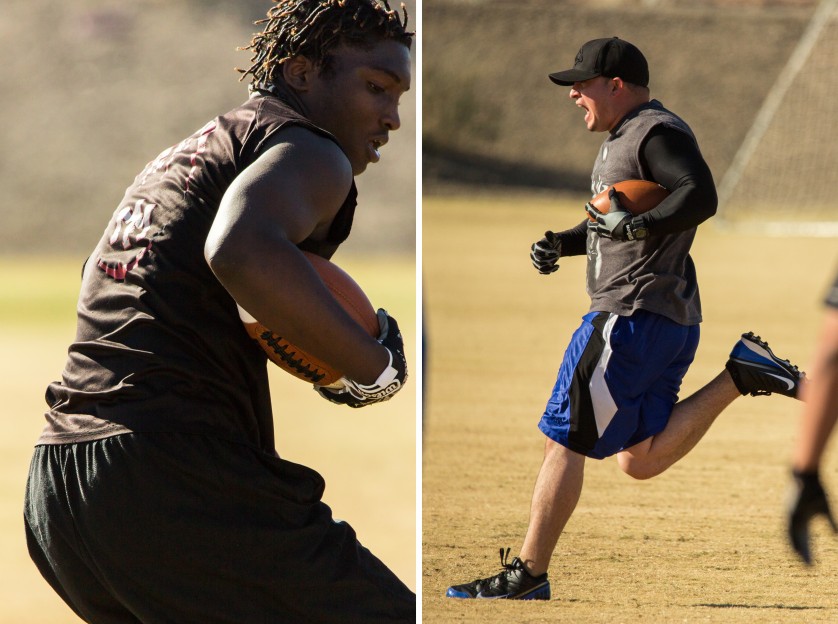 The lens is about 12 inches long and when the barrel is extended to reach the full 600mm, it adds an additional 4 inches of length. (Did I already mention it’s a beast?) Fortunately it does include a built-in tripod collar, so you won’t leave home without it (and wouldn’t want to). One nice feature of the collar is that it can be rotated easily 90 degrees so you can change from shooting horizontal to vertical in just a few seconds. The zoom on the lens can be either adjusted by turning the zoom ring or using the push/pull function. When pointing the lens up or down there is zoom creep as one would expect but Sigma added a cool feature to combat it. They included a lock switch on the zoom so that you can lock the focal distance at any of distances listed in white on the lens. I kept mine at 600mm most of the time while using it. When locked I experienced no creeping with the lens pointed up or down.

The lens is highly customizable using the Sigma USB Dock and Sigma Optimization Pro Software. In addition to updating lens firmware and adjust focus parameters you can also customize AF speed, focus limiter and OS function. This is a neat function that Sigma has been including in all their newer lenses and I appreciate knowing that throughout the entire range of the lens I can calibrate the focus to be razor sharp.

It is worth seeing the photo of my sister-in-law reading the book shot at 600mm to see how sharp the lens is so I have uploaded it in full resolution here. You can read the every word she is reading.

I believe it’s worth noting that there were two different Sigma 150-600 lenses released on the same date. The one I got my hands on was the Sport lens which is known to perform optically better, be a heavier more sturdy build and weather sealed. The Sport lens runs just $1,999. The other model labeled their Contemporary is their even less expensive sibling. I have not had a chance to handle or shoot with the Contemporary version of this lens so I can’t tell you much about it but I wanted to mention it so you don’t run out there and pick up a Sigma 150-600 at a deep discount from the $1,999 price and find out later you didn’t get the Sports model I have been talking about. The lens is available in Canon, Nikon and Sigma mounts.

For those who love the MTF charts… I included them below. 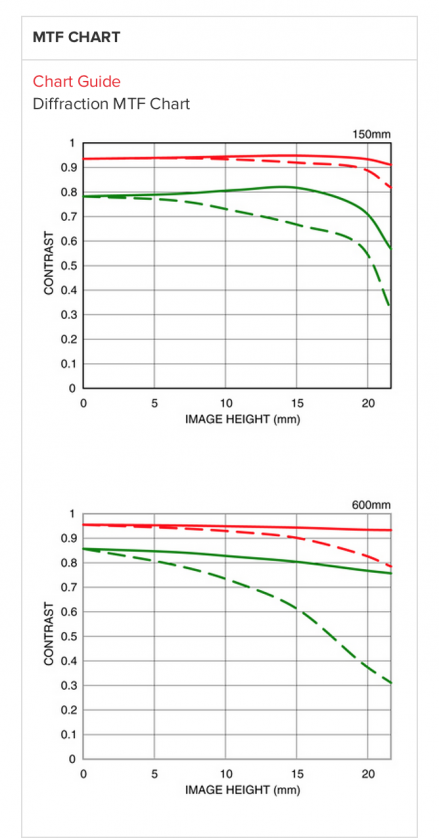 The Sigma 150-600mm f/5-6.3 DG OS HSM Sports lens exceeded my expectations. The build was solid and heavy but still manageable even hand-held. The imaging performance and focus was impressive. The lens was brimming with all of Sigma’s latest technologies and customizations including the useful zoom lock and advanced image stabilization. If I could ask for perfection, the only two things I would change about the lens would be the slight image vignetting that was noticeable in the images and an internal zooming lens. That said, I can understand that an internal zoom lens would have made this lens substantially larger so there would be a drawback to that of course. As a photographer that has shot on the sidelines of NFL games, I can see this super telephoto lens as being a game-changer and something that would give me significant advantage to get images at 600mm or even close at 150mm if the action comes to me along the sideline. In four words, this lens really delivers.

We give the Sigma 150-600mm f/5.6-6.3 Sport Lens a very high 4 out of 5 stars thanks to it’s solid beefy build and high performance focus motor. The glass is of superb quality and it reflects in the sharpness of your photos. Lastly the price for what you are getting is competitive. The only negative was the weight and the size of it. Well that and the fact that all the parents were staring me down at the park when I was shooting photos of my kids. Pretty certain I was labeled in the minds of a few as the new neighborhood creeper.