For the past two weeks I’ve discussed how to add color to your background using Rosco gels and Cinefoil from my Location Lighting Kit. For this week’s Tuesday Tips, I want to show you another way to accent your photographs, by adding shadows! The key to creating shadows where you want them is to have your strobe off camera. Remember, the smaller your light source the harder the edge. The angle of your light and the distance your subject from the background will effect how the shadow is projected.

1 speedlight :
In the photo below, shot at a Manhattan costume party, I placed a single speedlight to the left of the camera, lower than the subjects, and shot it through a small Rogue Flashbender fired with a PocketWizard TT-5. This sent the shadow up and behind the subjects while lighting the subjects with soft light. I can control where the shadow goes by moving my strobe. 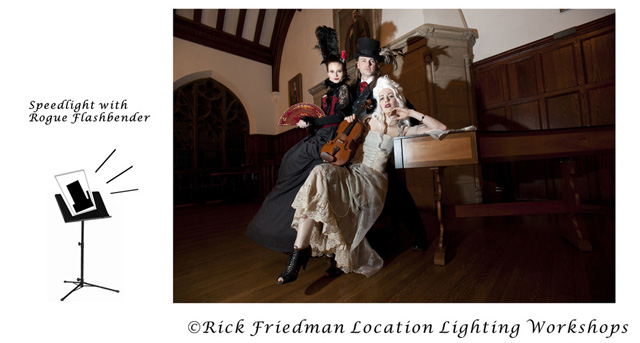 2 speedlights:
In this photograph for Harvard University of Professor Robert Lue, I wanted to show the Professor’s research on his computer.  The challenge was making an interesting photograph when the only background available was his computer monitor.  The starting point is to read the ambient off the computer, this gives you your base exposure.  When lighting a photograph like this, it is essential that no light from your strobes hits the computer monitor.  This photograph was lit with two Speedlights both with Rogue Grids to control the light on the professors face, while not allowing any strobe light to hit the monitor.   The Speedlight on the right is the main light to light his face:  one stop brighter, (step2).   The Speedlight on the left cast the shadow on the monitor and open up the shadow of his face.   To make sure no light from the strobe hits the monitor, or the shadow I have just created, the strobe on the right has a snoot created out of Rosco Cinefoil. 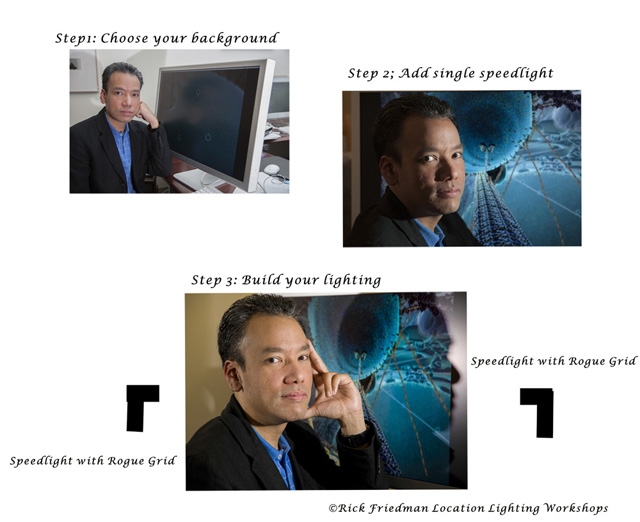 3 strobes:  Two Dynalites and a Speedlight
The challenge for this shoot was to recreate a photograph that was previously shot in early March, when the sunlight was low on the horizon and casting the shadow on the wall.  The problem was this photograph was shot in July, when the light was totally different.

The solution: recreate the original light by placing a Dynalite outside of the door.  To control the direction of the light from the Dynalite strobe, I put a grid over the strobe and added a Rosco 1/2 CTO to warm it.  The strobes were fired through the walls using a PocketWizard Plus lll.   Inside I had a second Dyanlite to light her face, also with a grid and a Speedlight aimed at the dark side of her face. 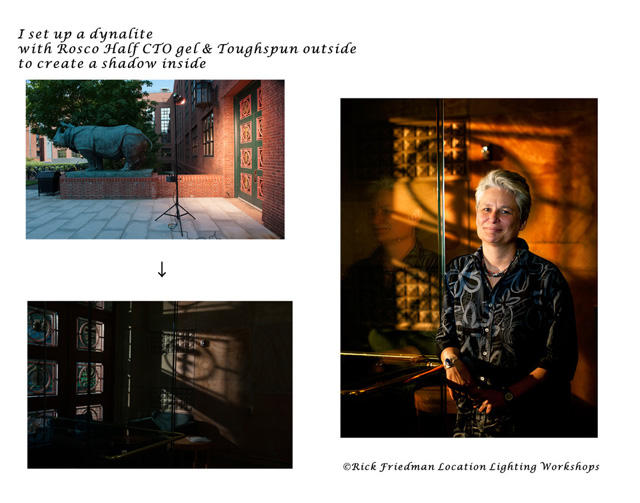 Thank you Rick Sammon and Juan Pons for having me on this edition of Digital Photo Experience! Hope everyone can tune in and listen!

Our friends at Hunts Photo and Video are giving out 20 % discount on Rogue flash benders SM and LG, to our readers.

I will be traveling next week, so Tuesday’s Tips may take the week off.  I hope everyone will have a great Thanksgiving!