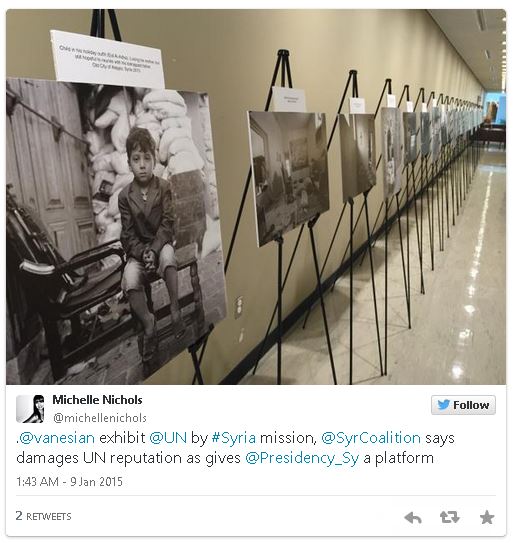 Photography exhibits falls under the form of freedom of speech and expression. It has been the platform used by many photographers to spread awareness about the plight of the oppressed, poverty stricken and abandoned people from all over the world. However, in certain instances it courts with controversy if this medium is viewed upon as showcasing images favorable to a despotic regime. Such is the case of a UN photography exhibit being held at the UN headquarters in New York City right now, where critics and Syrian opposition groups have branded it as taking sides with the Syrian Government of President Assad.

Organized by the UN mission of Syria, the photography series called “My Homeland” by Armenian-Syrian photographer Hagop Vanesian is drawing an outcry from Syrian opponents.  Syrian National Coalition Representative to the UN, Dr. Najib Ghadbian’s claims in his letter to  U.N. Under Secretary General for Management Yukio Takasu, that the photo exhibit was commissioned to “whitewash the regime’s war crimes and perpetuate its narrative: that it is a victim rather than the primary perpetrator of death and destruction in Syria.”

“By doing so, the UN condones the atrocities committed by Syrian forces, and serves as a mouthpiece for (Bashar) Assad’s heinous war crimes.” the group further stated as they increase their calls for the UN to remove the exhibit.

UN spokesperson Stephane Dujarric defended the exhibit by telling reporters that the responsibility falls to the UN missions for the contents of any photography exhibit they sponsor.

He explained that the slots for photo exhibits at the UN headquarters’ non-public areas are reserved to member nations and states a “first-come first-served” basis and that the UN, in following the path to freedom of expression, does not practice any editorial control over the content. “Representatives of permanent missions are asked to use the utmost discretion to ensure that exhibits are in non-commercial nature and consistent with the principles and aims of the UN,” Dujarric said.

Journalist Samuel Oakford who have seen the photography exhibit wrote about the images on his  Vice News article “Vanesian’s pictures show bombed-out churches, pillaged homes, parents mourning dead children, and improvised defenses made of sheets to prevent snipers’ lines of sight. In photographs where a looming enemy is suggested, it is invariably rebel forces. In one photograph, four children, among them a toddler, are shown standing around an unexploded jerry-rigged gas canister missile, a weapon known to be used by rebels in and around the city.”

In defense of his exhibit, photographer Hagop Vanesian told the Associated Press that he’s a “humanitarian” and not a politician. “I just photograph the suffering of the people,” he said, adding “that Western countries have listed some of the groups fighting inside Syria as terrorists.” and according to his twitter bio “The war in Syria changed my life but not my principals,”

In light of this issue, do you agree that photography exhibits should be look upon without any political leanings and let us just view the photographs as it is without fear that it can become a propaganda tool of a certain political faction? Or you think, that photography should always side with the oppressed and steer out of documenting the other side of the story? well, right now it does not look like anything like a clear black and white territory and it is something us photographers can openly discuss among each other.