The name here almost says it all. The Feather Camera Crane weighs less than 4lbs while extending the camera out 7 feet from the base. What the name doesn’t tell you though, is that it packs down into a kit that is only 28 inches long. In this video and written review, I’ll share with you why this thing rocks for outdoor adventure filmmakers.

I was spending two weeks working on the Michigan Ice Film with Clear & Cold Cinema, so I had the crane shipped to the cold north of Michigan’s Upper Peninsula.

When I pulled it out of the box, it was shocked that there was supposed to be a 7-foot long crane in there, it was just so small. I set it up the night before our shoot, just to check everything out and make sure I knew how and didn’t fumble around in the snow. I would be using it in single-digit temperatures and on icy ledges, so I wanted to troubleshoot issues sooner rather than later. An easy to read manual helped me the one time I couldn’t figure out a setup detail, but in general the setup was intuitive. 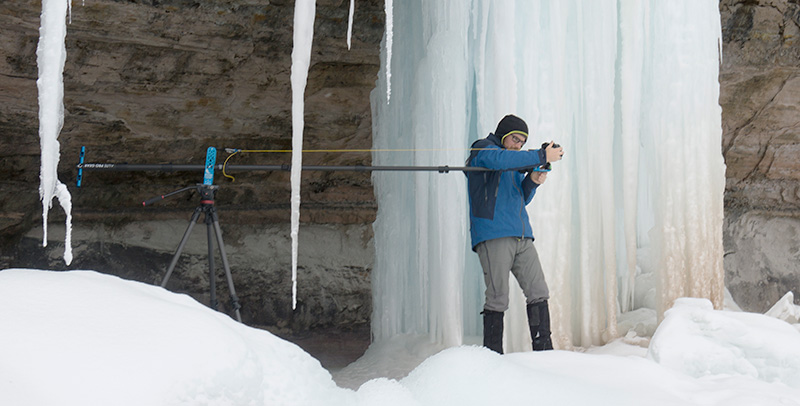 The kit included a black, neoprene-like bag for the boom arm and camera plate, and a smaller, rollup style bag that holds the counterweight bar, tripod attachment, and spare parts. This bag can also be used to fill with objects for a counterweight. Personally, I preferred to use other gear bags for this but that was a personal choice, as I wanted to keep the rollup bag clean. I was able to load the FCC kit into a Manfrotto bag that also held the tripod I would be using to mount it– amazingly it all fit inside the bag, right next to the large tripod! 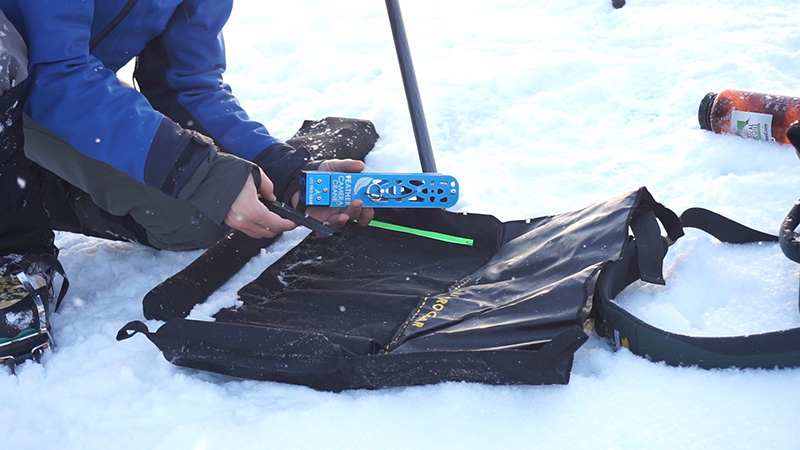 In the field, the Feather Camera Crane set up fast, and it gave me exactly the shots I was looking for. I mounted a GH4 onto it, but this rig can handle larger cameras like an FS700, or even a Red (The weight limit is 10lbs.)

The FCC uses lever-lock boom arm sections that can free-spin, so at first I was worried about accidentally pulling them out or making the head section difficult to level. Neither was the case as the arm sections don’t pull out (you can see a blue section when you’ve made it near the end of an arm for easy reference.) With a single boom-arm style, leveling was extremely easy. The first shoot I did with it was of ice bouldering. I found that the crane’s rollout kit bag made a great place for sitting the camera head side of the crane down onto. This kept the snow off the camera, and allowed me to tweak the counterweights.

Speaking of counterweights, this took a few shoots for me to dial in. With only my gear bags and what I had on hand, I used a carabiner to clip a camera bag onto the handle. As I boomed the crane around, the bag would shift, causing a shake in my shot. The more I worked with it though, the more I figured out the best ways to affix a bag for counterweighting, and keep it from either hanging too low (preventing a high boom) or shifting during boom moves.

On another shoot I found myself in a precarious position, on a (relatively flat) surface of ice, directly above an immediate 60 foot drop off where an ice climb had formed. I made sure to secure myself as well as the tripod that would be holding the crane. Setup of the crane again was easy, but adjusting the camera and counterweight ends was very tricky because of the limited amount of area I could move about. I placed the camera on a small ballhead and pointed it straight down for the angle I wanted, and wrapped the shoulder strap around the crane arm for another level of safety.

This worked great and was one of the best shots I was able to capture.

I used it a few more times for this project, and with each use I got quicker and more efficient in my setup. I discovered that I could easily keep my ballhead screwed onto the camera plate, and it would still fit into the boom arm bag. Also, since I was using a Manfrotto tripod bag to carry everything around in, I left the quick release plate attached to the bracket that holds the crane. Doing all of these things just made setup time that much faster, and tool-less. 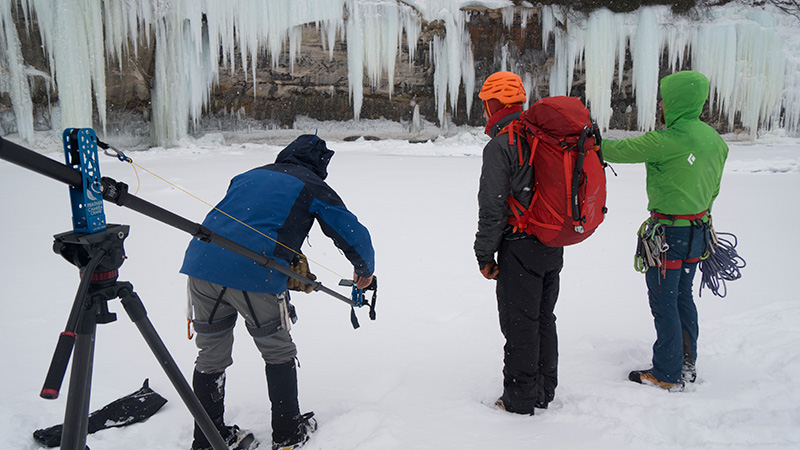 One thing I had to watch out for is the amount I tilted the tripod up or down– it will tilt the camera on the plate, but if I went too far, the cord loosened and the camera fell forward/backward. It doesn’t hurt anything, but it will ruin your shot. The first time it happened to me I was scared for the camera, but upon closer inspection it was easy to see that the camera was still completely secure. My takeaway from this is that I can only tilt up/down so far– a ballhead is needed for extreme up/down angles, rather than tilting the tripod head. After just a few uses, I could easily feel how far I could push the tilt without having this happen.

Overall, I’ve been very impressed with the quality of footage, the low weight and small footprint of the unit, and how easy it is to assemble. Within a few shoots I feel that I’ve come close to mastering the use of it, and minimized my setup time as much as possible. The FCC cannot tilt all the way up or down (you need to use a ballhead for those angles) but that’s the price you pay for having a lightweight cord instead of a second boom arm… which is not bad considering the weight and space you save.

We give the Lite Pro Gear Feather Camera Crane 5 stars out of 5. If you’re serious about getting great shots on your outdoor adventures, the cost is well justified.

Thanks to Aaron Peterson and Dan Englund for providing footage from last year’s shoot, and clips of me running the crane for the work done this season! Check out the Michigan Ice Film here.