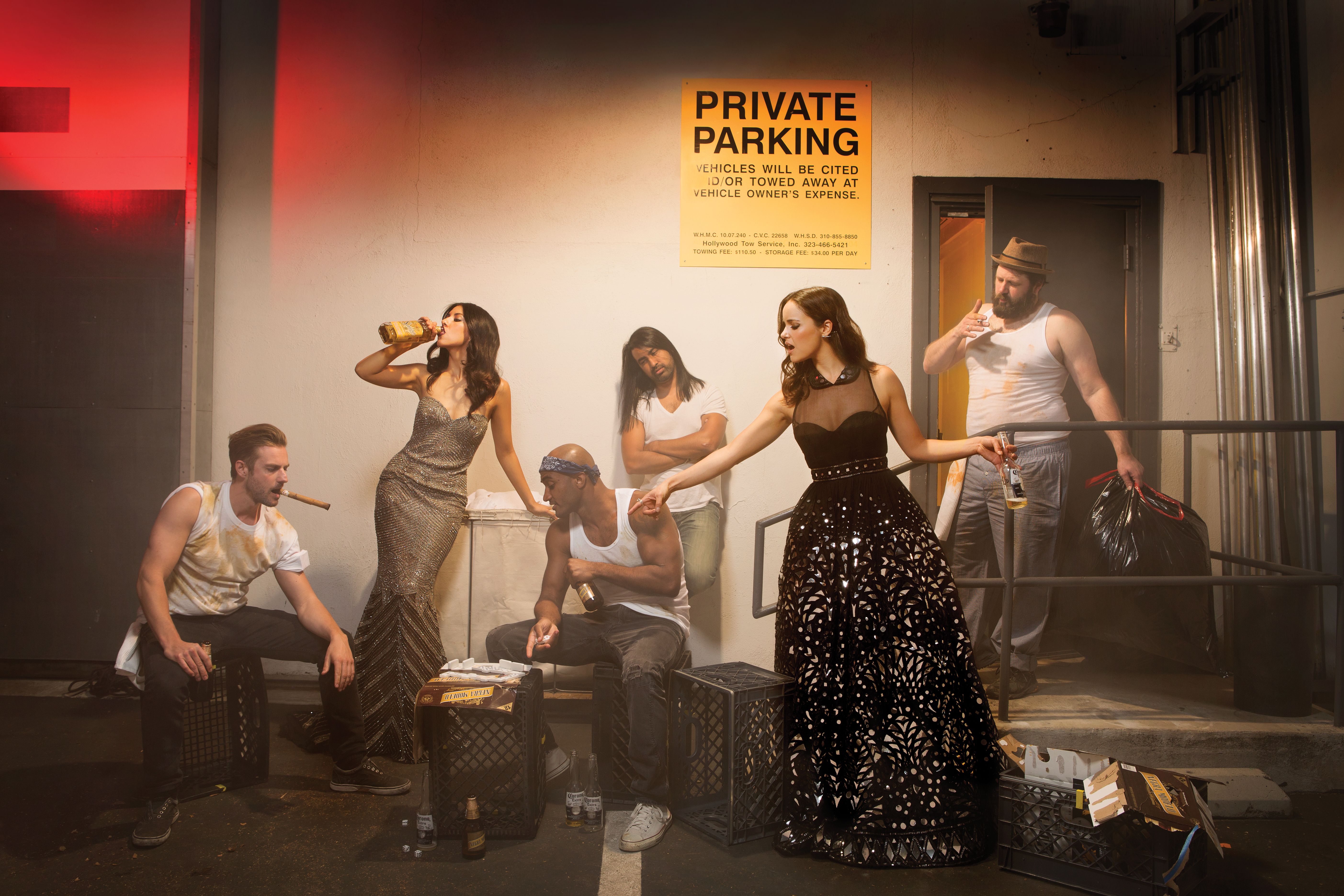 The cover story of this issue explores what it takes to be a successful comedy actress, from preparing for a role, to the physicality that brings everything together on set. Watch our behind the scenes video of our cover shoot for more on this issue’s production, to see what Fumero and Beatriz are like outside of the Fox Studios set and in the hands of Resource Magazine, and get treated to an in-depth look at how lighting, posing and planning came together to make these images happen.

The nine images from the shoot were taken over the course of 12 hours in three different locations within Quixote studios. The first few were shot in a bar setting that we filled with a hazer’s fog to give it a late night atmosphere, the second batch were done in the main studio, and the last three in the parking lot.

The first photo, which features Melissa and Stephanie stuffing their faces with food, evolved over the course of the shoot. Originally, Melissa had full rights to the burger and Stephanie had a large martini glass full of Maraschino cherries. But as the two actresses got into the groove of the shoot, ideas began to evolve and the final image was heavily influenced by them. 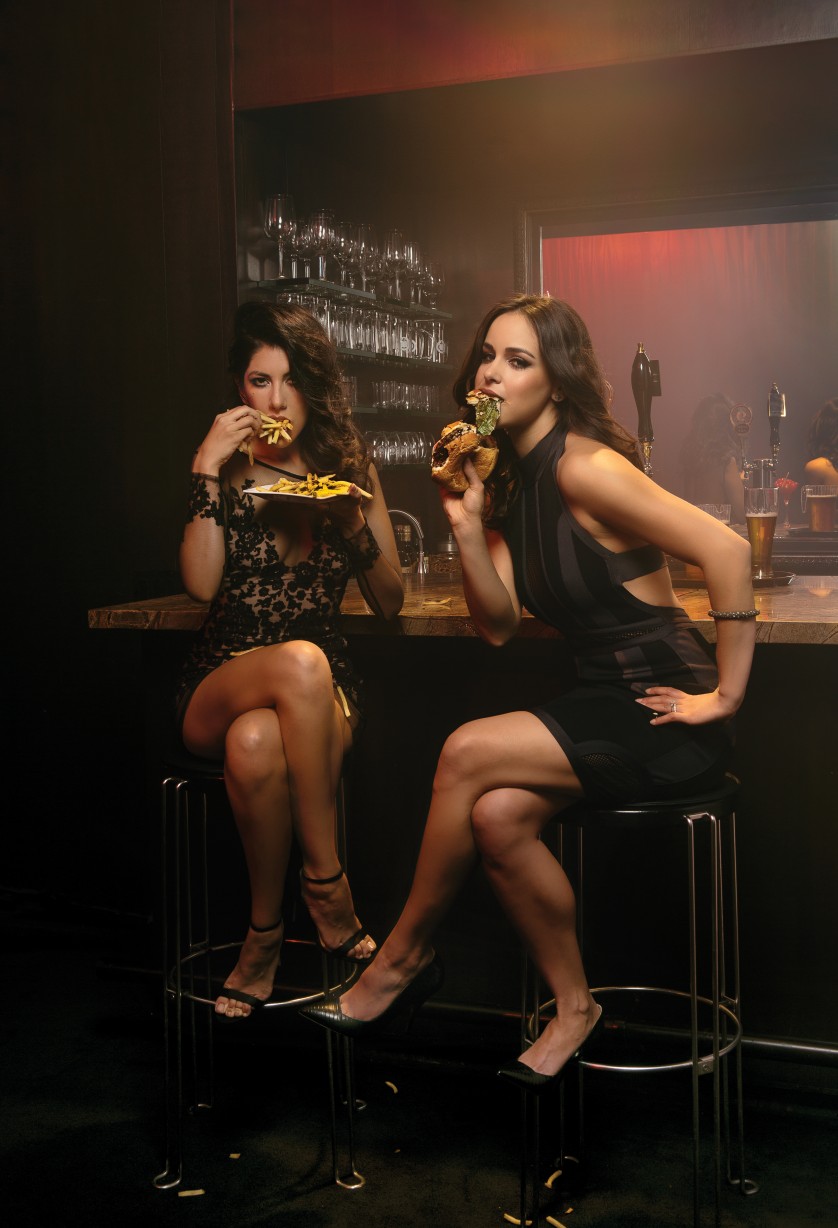 The lighting on this image is a bit more complicated than it might seem at first glance, with four lights each doing a very specific job. First, the key source was an Elinchrom Rotolux pitched at an angle from high up. Next, was a Profoto head acting as a hair light on a super boom with both a zoom reflector and a grid topped off with a one stop CTO. To the far right of the image (looking at the final result) there was another Profoto head aimed far into the corner bouncing off the wood paneling. The fourth and final light, which gave off that red glow, was another Profoto head up high on a C-stand with just a simple globe on it pointed into the ceiling. It added that little touch of color that could be from a neon bar sign, an exit sign, or something like that. It basically helped the room feel more alive.

The next two images and the cover image (shown at the bottom of this article) were also taken in the bar, but off to the right of the last photo on a leather couch. These were a bit simpler to light, but still required three sources. The first was a large Profoto Fresnel with barn doors aimed directly at the faces of Melissa and Stephanie. It’s sort of a classic cinema light, and that’s the kind of light Natalie was going for. Above them was a hair light, which is just the super boom from the last shot with the CTO removed, swung over and placed directly above the two girls. Finally, to make sure there was enough fill, directly behind Natalie was another light aimed into a v-flat to just fill the space lightly and bring up the values of the blacks, and offer a light fill to the images. 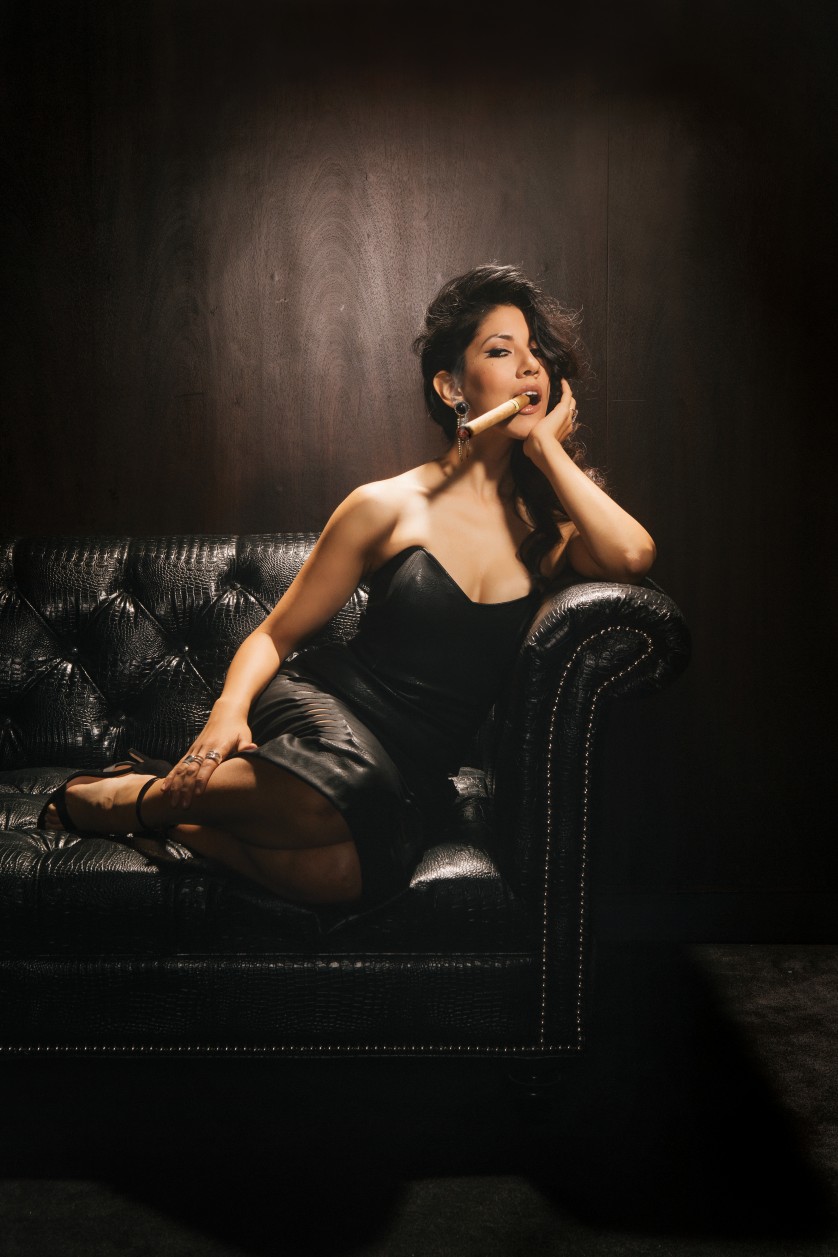 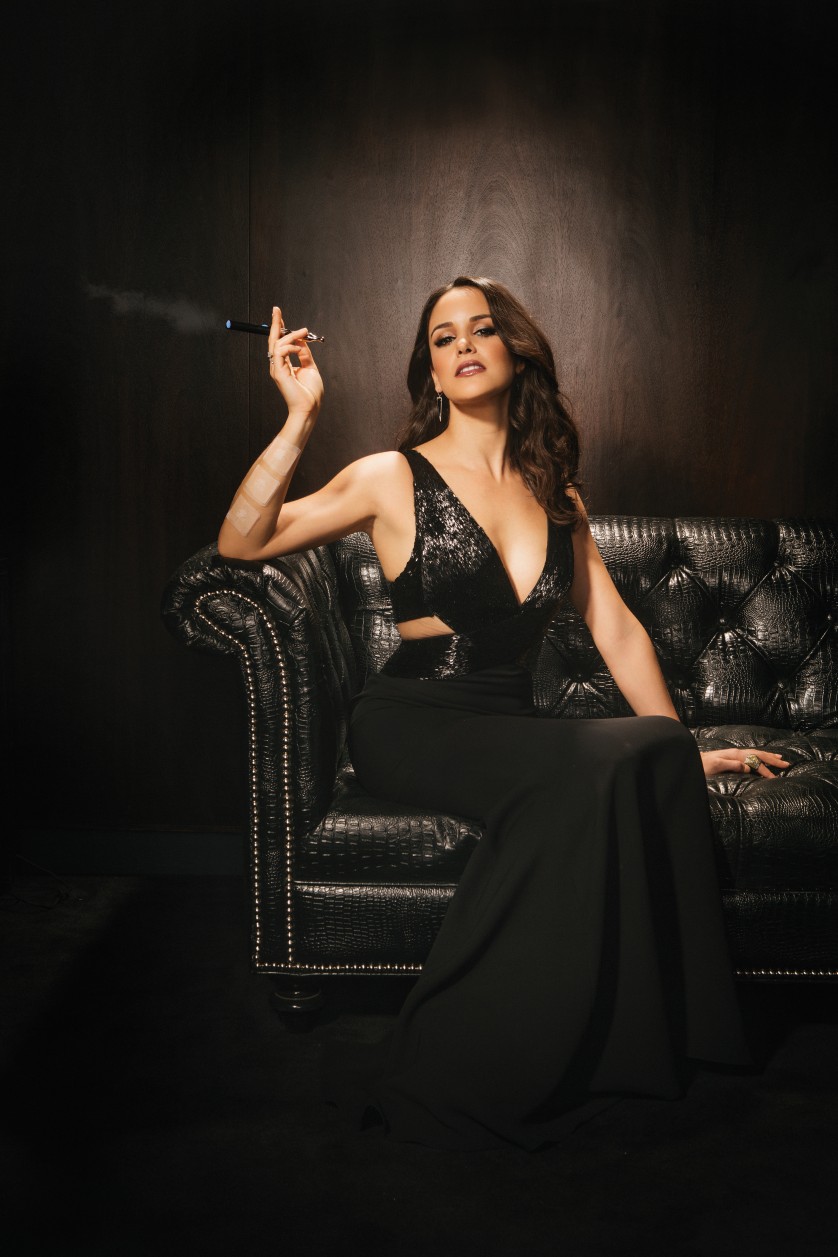 The two shots taken in the mirror are rather cleverly lit, as the main source here is the mirror itself, but overall this was the simplest indoor lighting arrangement of the day. For these we left the bar and went out into the main studio which featured a massive psych wall. For the key light, Natalie pointed a head at the mirror, which of course bounced light back. She also pointed a Rotolux into that psych wall behind the models and the mirror to generate just enough light to bring up the color of the wall from medium gray to white. 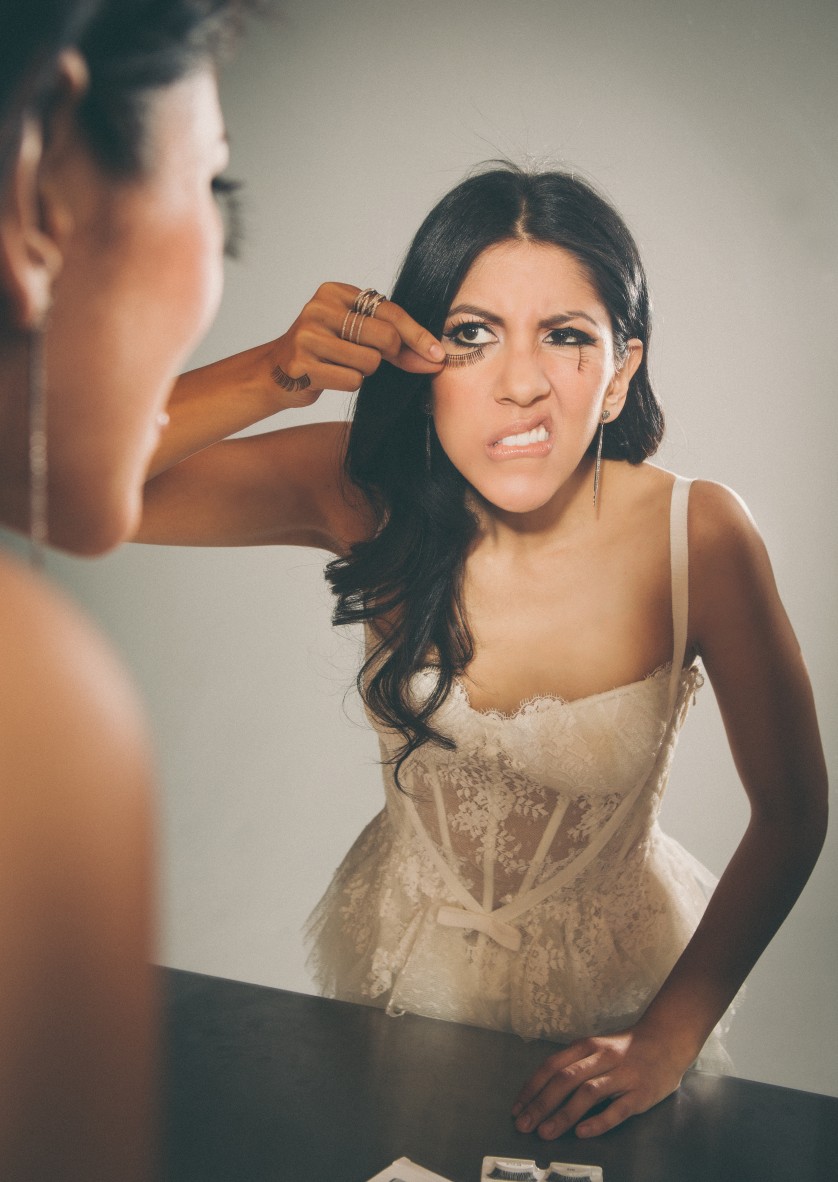 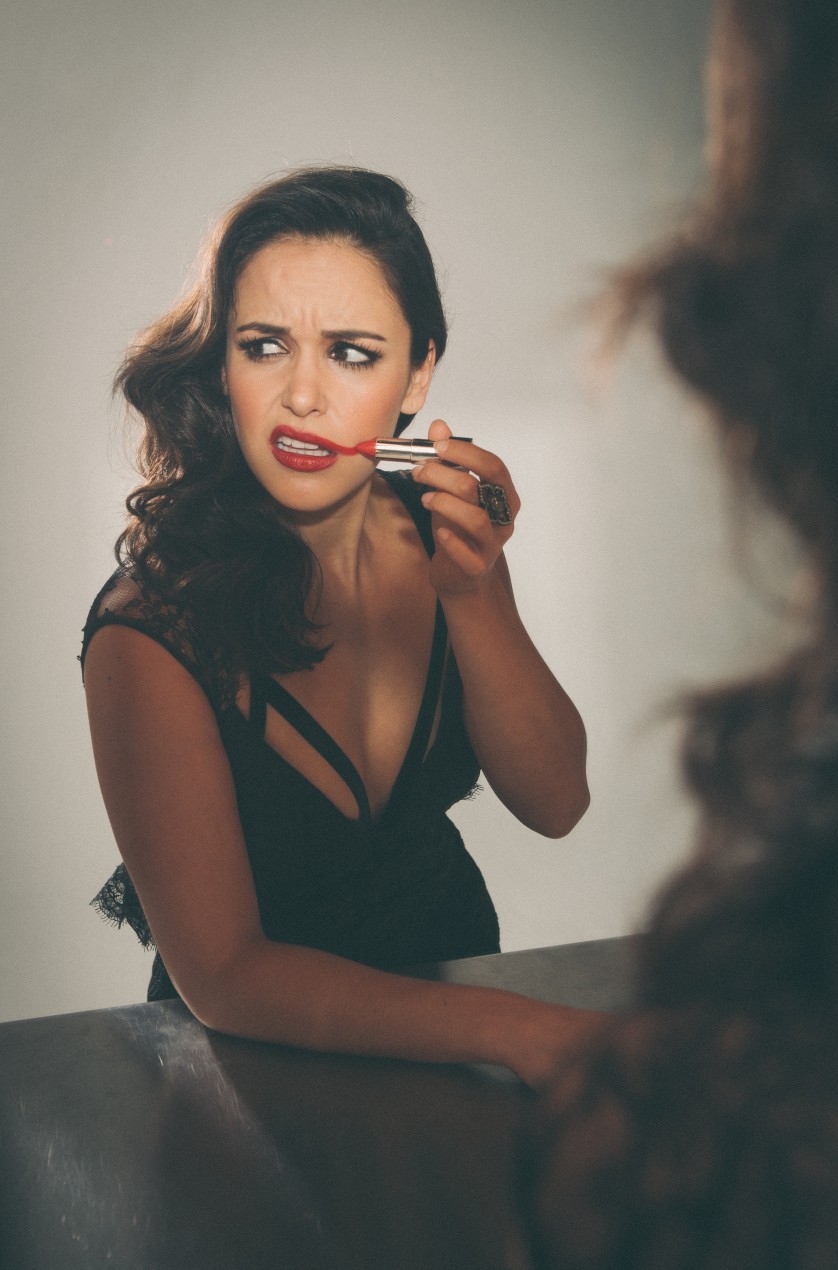 The next set of shots were done in the parking lot in front of the studio, just as the afternoon was turning into evening. The lighting was really soft and filled in from the position of the sun, give that we were in the shade. That alone did most of the lighting for this shot, while Natalie filled it in with that Rotolux high overhead. 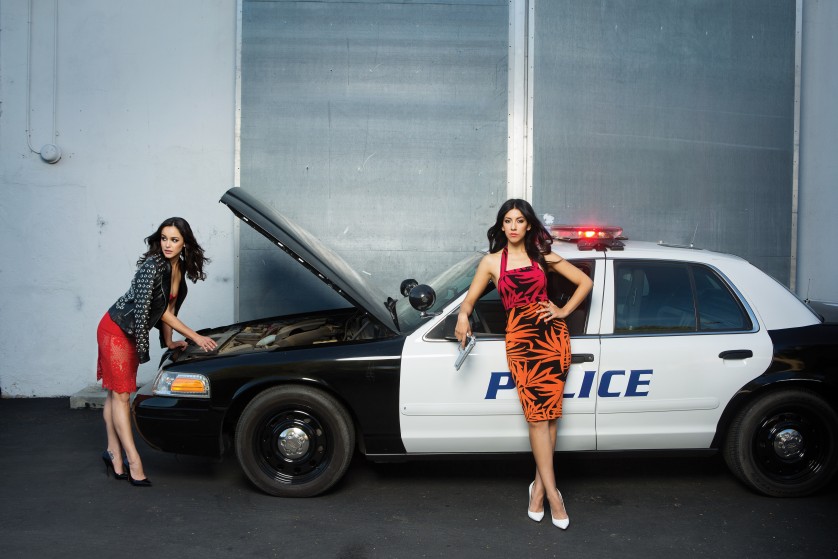 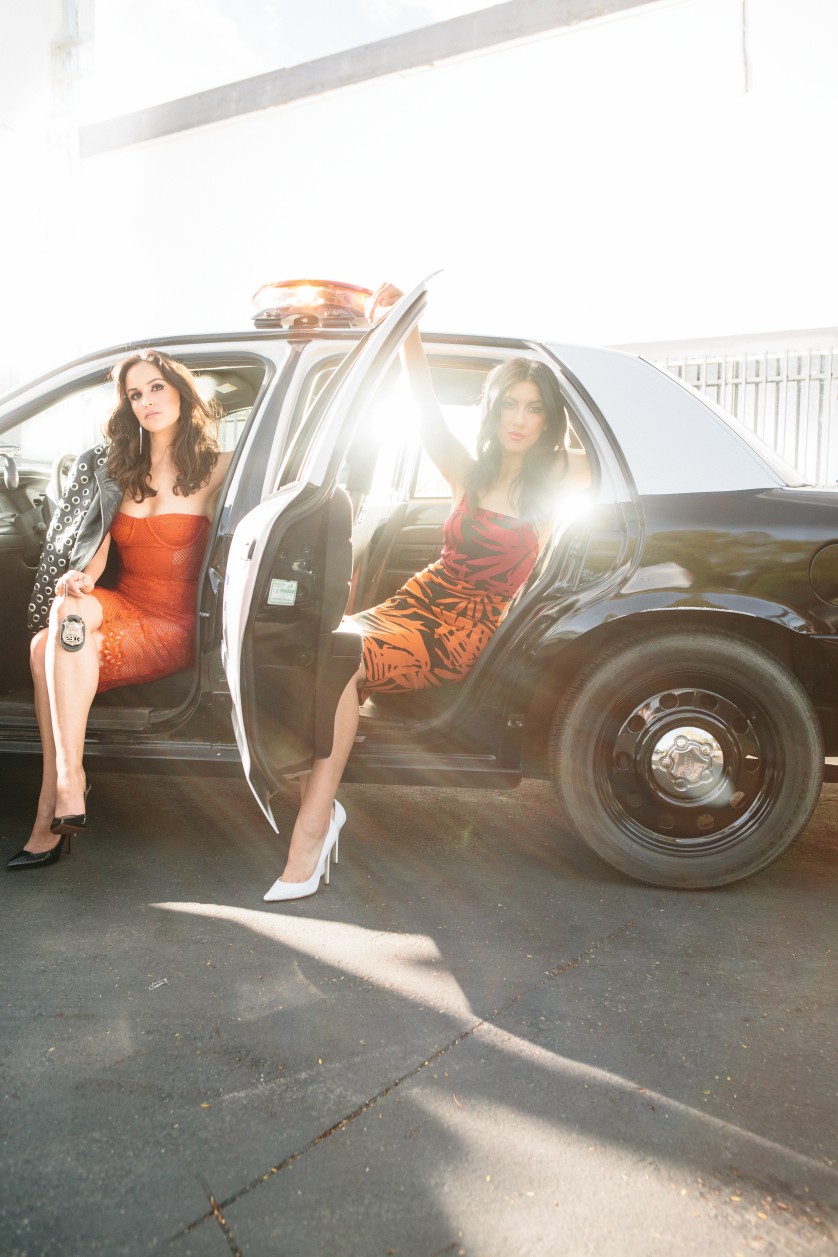 The final image was Natalie’s favorite, and was one of the more complicated to set up. It features both ladies and four extras acting like dishwashers/line chefs from a restaurant. All six of them were “boxed in” by a wall of v-flats and shrouded in a bit of haze from a fog machine. Coming in from the door behind the extra on the far right you can see a soft orange glow, and that’s from a Profoto head with a stop of CTO aimed out into the parking lot. Overhead to the right was another bare head with a zoom reflector and another piece of CTO that’s creating kind of a practical source, similar to a street lamp. On the left side of the frame was another head with a piece of red gel, which added some dimension to the image. Finally, to clean up the image a bit more and to place focus on the ladies was beauty dish with a sock over it. 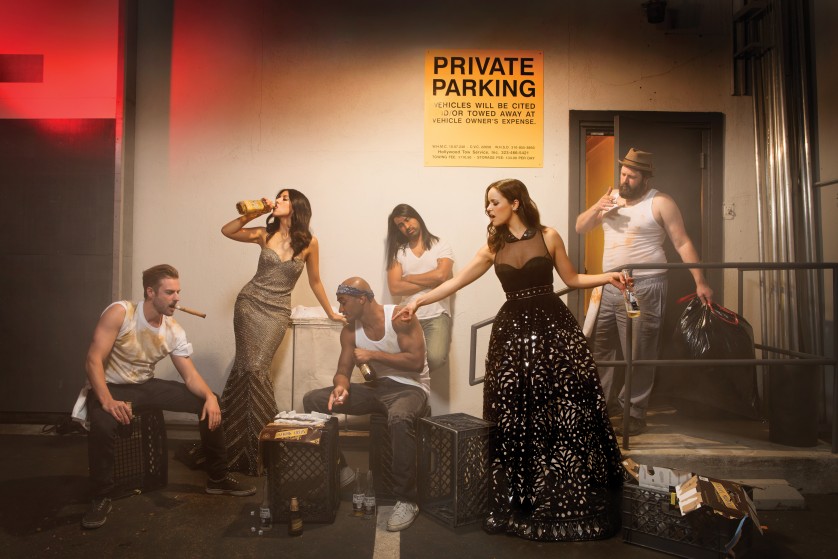 And that does it! Hopefully you guys enjoy the images as much as we do. The spring 2015 issue is available in the Resource Mag Shop. Grab your copy today! 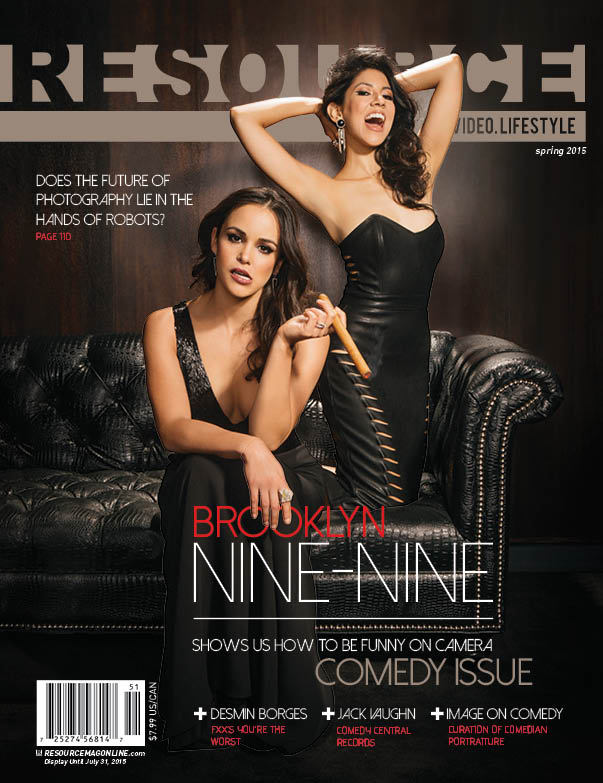