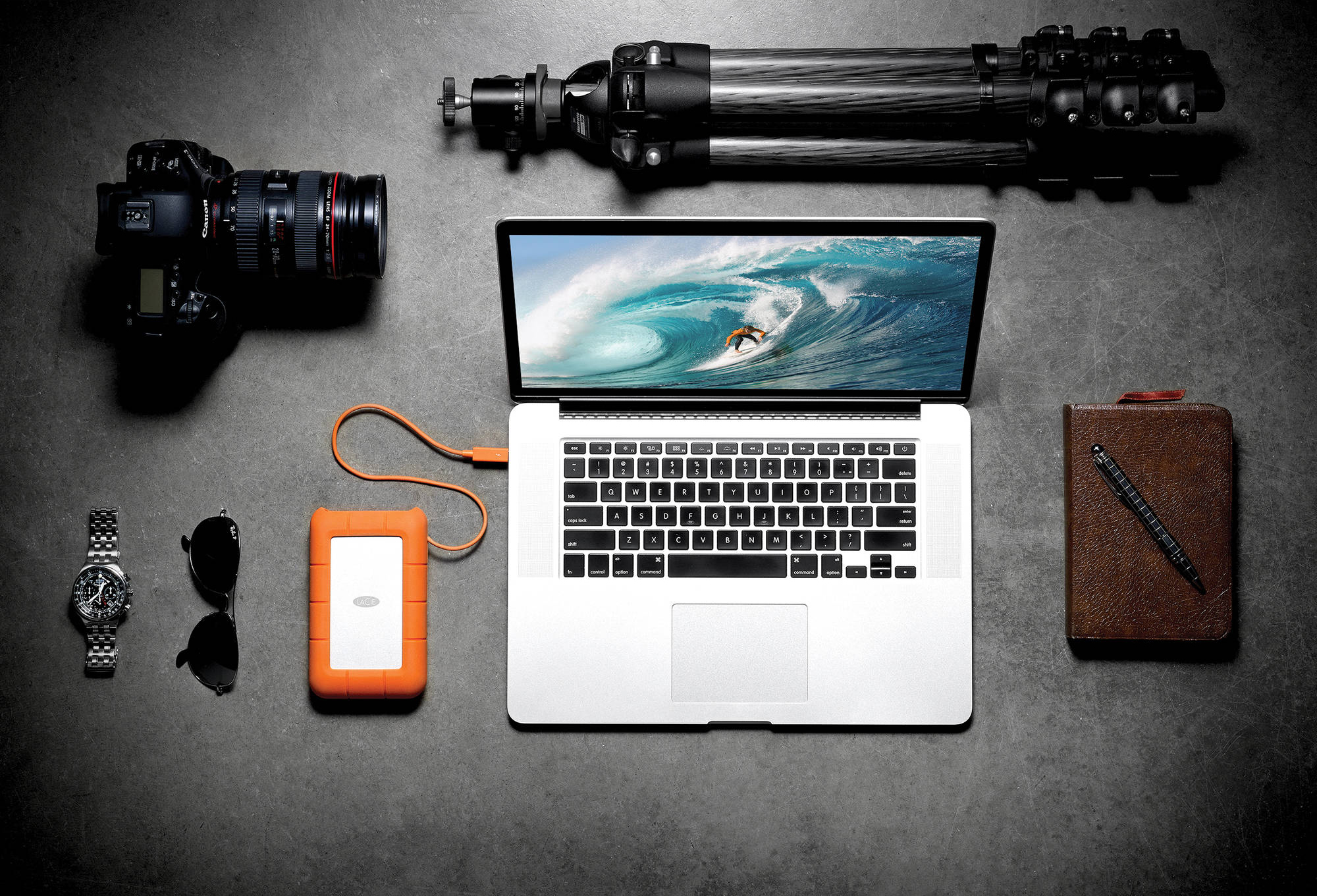 I’m a rather big fan of the latest iteration of LaCie’s Rugged portable drive, especially the SSD version. It’s a lightweight, compact, extremely fast option that I take with me almost everywhere and use for transferring data between workstations I own as well as among the people with whom I work. This being the case, I was of course curious to see the latest member of the Rugged family: the Rugged RAID.

The Rugged Raid is a 4 TB (two 2 TB discs) dual magnetic disk system housed within the familiar Rugged orange rubber and aluminum exterior. The advantage of the Rugged RAID is of course storage capacity, as my Rugged SSD is still limited in size to 512 GB thanks mostly to the cost of producing SSDs. So if straight storage is of primary concern, would the Rugged RAID be the right choice? 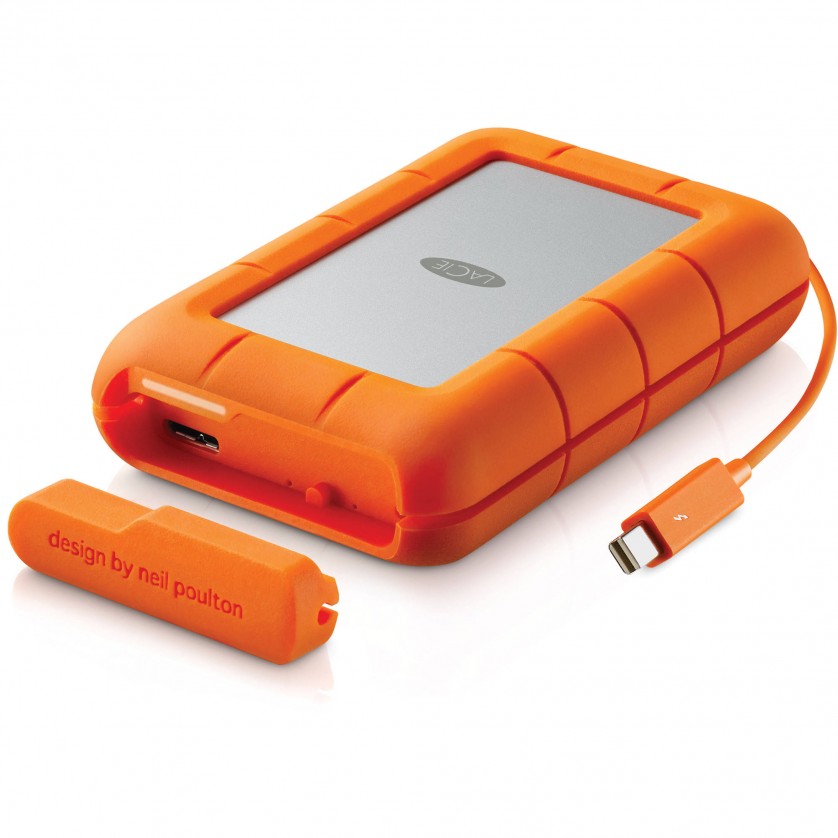 Before we get into performance, let’s first talk about how the Rugged RAID looks and feels. The RAID is just a hair thicker than the new Rugged SSD, and perhaps a half an inch taller if you put both drives on their side. It’s certainly not larger by any wide margin. It has basically the exact same general design and construction as well, featuring a built-in Thunderbolt cable that wraps around the outside of the drive and tucks into a pocket. Though the Thunderbolt cable isn’t removable, the USB 3.0 option is and furthermore can’t be tucked into the device like the Thunderbolt. This is actually a good thing. The device is clearly aimed more towards Mac users than PC, but both can use it. In addition, if for some reason the Thunderbolt cable breaks during use (which can absolutely happen), your data isn’t lost. You can use the USB 3.0 cable to pull the data off. 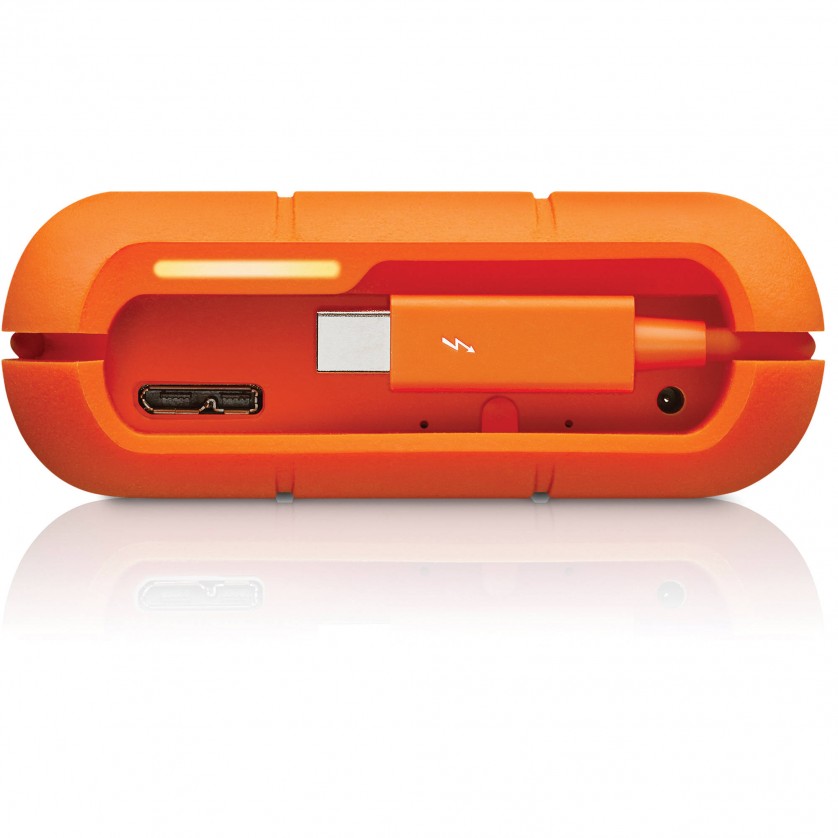 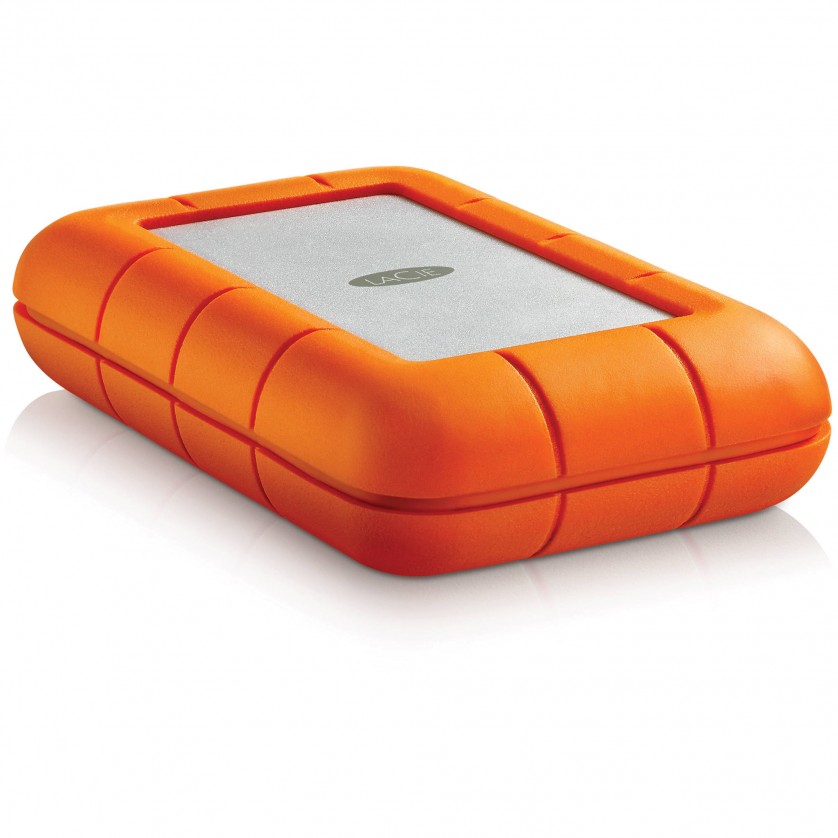 Where the RAID differs slightly from the SSD version is in controlling the RAID functionality. As a premise, I must explain that the LaCie is Hardware RAID, not Software RAID. Though there are extensive explanations over why you would or would not want Hardware/Software RAID and which one is best, I would prefer to focus on how to take care of this particular Hardware RAID. What that basically amounts to is that in order to switch the Rugged RAID between RAID 0 (striped, fastest) or RAID 1 (most secure). Via the LaCie website:

RAID 0: RAID 0 is the fastest RAID mode. In a RAID 0 array, the available capacities of each hard drive are added together so that one logical volume mounts on the computer. It offers the best performance but no data protection should a hard drive fail.

RAID 1: RAID 1 provides data protection since all data is written to each hard drive at the same time. In the event of a single hard drive failure, data remains available on the other hard drive. Due to the time it takes to write the data twice, performance is reduced when compared to RAID 0. RAID 1 is a good choice when safety is more important than speed. However, RAID 1 also reduces the available drive space by 50% due to the need to write every bit of data to each hard drive.

So this is how it’s done: On the inside of the drive there are two little holes that require a pin or the end of a paperclip in order to push. This is how you change between RAID 0 and RAID 1. In the drives I’ve had before, which were Software RAID, I was able to change this using my Disk Utility on my Mac, and no manual actions directly on the drive were necessary. It’s just something to keep in mind if you plan to frequently change the drive between RAID o and RAID 1 (not sure why you would need to, but to each his own). For a full description of how to alter the type of RAID on the Rugged, please read LaCie’s instructions.

LaCie also states that the Rugged RAID can reisist shock, dust and water, with an IP-53 resistance to dust and water and shock resistance from a drop of 1.5 meters. The “Ip-53” rating means that as far as dust, “ingress of dust is not entirely prevented, but it must not enter in sufficient quantity to interfere with the satisfactory operation of the equipment; complete protection against contact.” As far as water, “water falling as a spray at any angle up to 60° from the vertical shall have no harmful effect.” So it is by no means water proof, but ocean spray or being near a waterfall should not pose a problem. The drive can also survive being run over by a 1-ton vehicle, which addresses real-world scenarios such as the product being accidentally driven over by a car, crushed under stacks of suitcases in the airplane cargo hold, or knocked off a desk and stepped on by a colleague. In short, it’s pretty darn tough.

Final note, it’s kind of heavy. You certainly notice the weight, which is in stark contrast to the other LaCie Rugged drives available. It’s at least double the weight of any Rugged I’ve ever held, dating back to the older magnetic disk options.

Ok, with all that out of the way, let’s talk speed (which I think is the most important thing). LaCie says the drive can get up to 220 MB/s when striped (RAID 0). Here is the results of my testing: 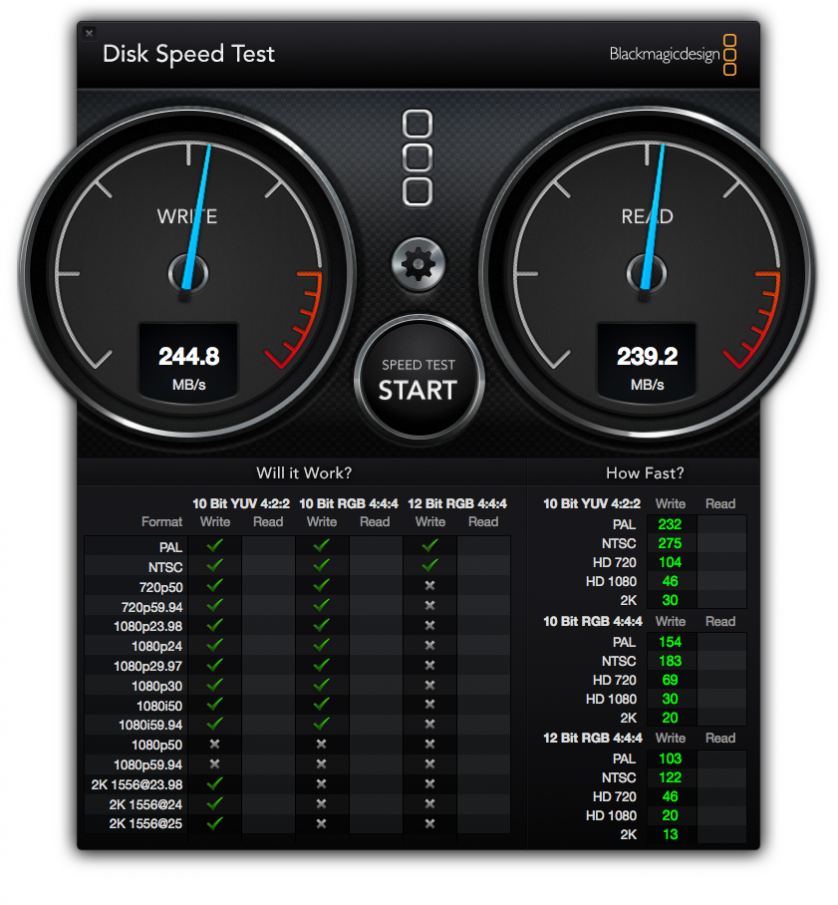 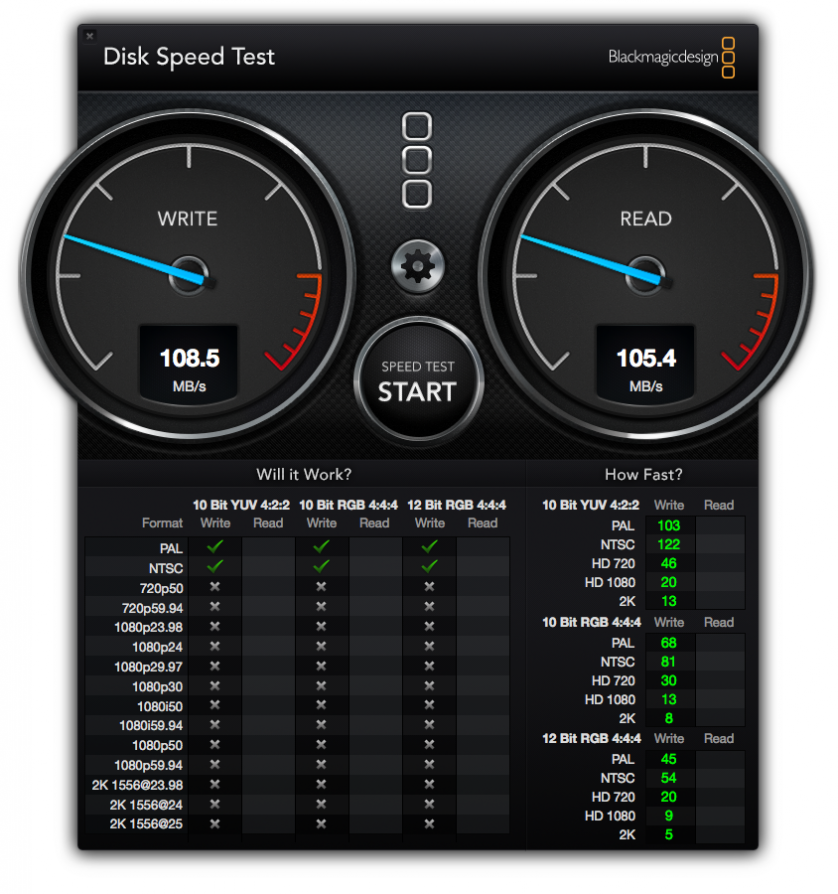 Not only did the LaCie meet expectations, it exceeded them. This is actually quite rare in my experience. Most of the time hard drive companies will state what a drive will do in the best of situations, and it’s rare to get those situations to repeat. However in this case, LaCie seems to have played it safe as the drive hits a top speed of 245 MB/second write speed, which even exceeds the read speed of 239 MB/second and the quoted 220 MB/second.

Another great feature of the LaCie is how quiet it is. My other portable RAID drive is the WD My Passport Pro, which can get rather loud with its fan, especially when handling large loads of data. The LaCie on the other hand is whisper quiet all the time. The drive will get warm, but it seems to sink heat extremely efficiently. Also, compared to the aforementioned Passport Pro, the speed of the Rugged RAID is better. I was seeing about 190 MB/second on the larger Passport Pro, and 208 MB/second on the smaller one (terabyte space is the size I am referring to). Compared to both, the disks on the LaCie are faster, and that’s a good thing.

The only real “downside” with the Rugged RAID is the price, with a list of $420 at LaCie.com, but can be found on B&H for $400. That’s a lot more than the WD competitors at any size, and the LaCie only comes in the 4 terabyte option (2 TB RAID 1). Though given it’s faster, tougher, quieter and more versatile than the WD option, that price might be worth it.

The LaCie Rugged RAID is the toughest, fastest and most versatile portable RAID drive I’ve tested. Right now, it’s the best option in this category thanks to the additional USB 3.0 option and the fact it’s faster than the competition. It’s compact, though heavy but not to a terrible degree. It’s also silent and sinks heat incredibly efficiently, especially considering it has no fan to keep those two magnetic disks cool.

We give the LaCie Rugged RAID a high 4 out of 5 stars for excellent performance and toughness along with versatility that is only hampered by a slightly higher than comfortable price point.