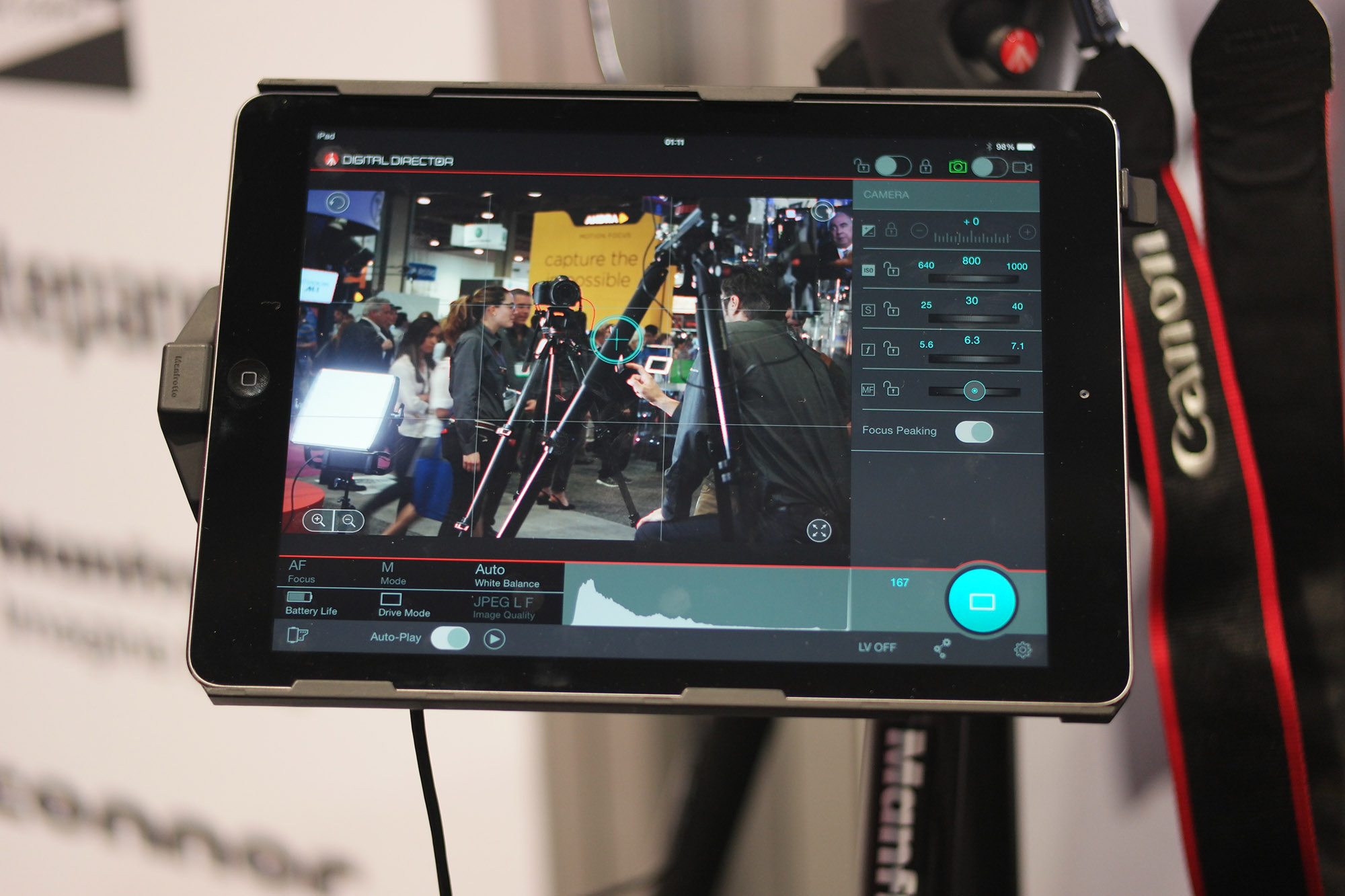 When I first saw the press release regarding the Manfrotto Digital Director, I almost didn’t believe it. A company I associate with tripods, walking sticks, the Magic Arm and backpacks was making an app? It didn’t compute. After testing the Digital Director myself for quite some time, I’m prepared to say I’m not just pleasantly surprised. No… I’m wildly impressed.

The Digital Director is clearly Manfrotto’s attempt to wrangle some of the business CamRanger has been dominating over the past couple years. The CamRanger is popular because it’s small, has a great interface, and it just plain works. However, the CamRanger has some shortfalls: WiFi can be unreliable in some places and it has very limited live view capabilities. Those don’t seem like big shortcomings, but Manfrotto’s Digital Director fixes both those issues while only giving way in one area- mobility (more on that later). 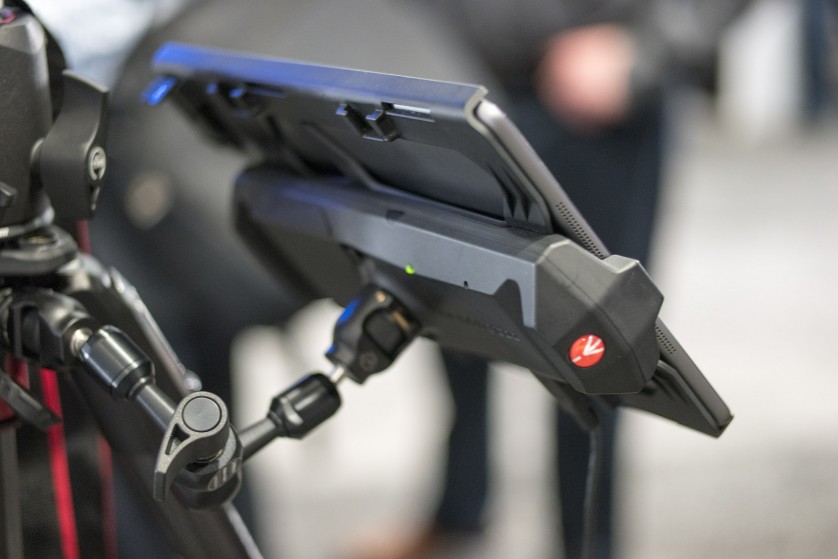 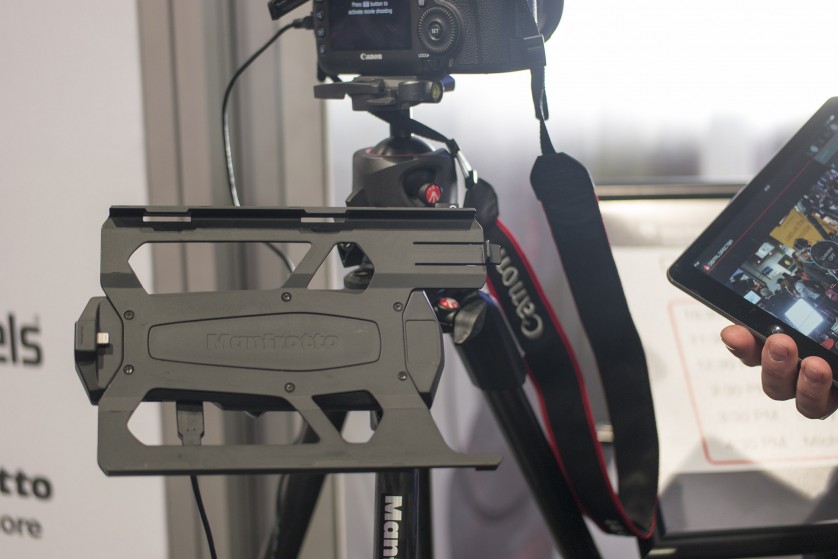 So to start with, the Digital Director (hereafter I shall refer to it as the DD quite often) is a much larger rig than anyone who uses CamRanger would expect. Rather than just an oversized dongle, the DD is a whole carriage for the iPad that Manfrotto seems to be recommending that you attach to your tripod, and this makes sense. It’s not particularly heavy, but what the DD excels at is best suited to tripoded work.

The actual carriage is powered by four AA batteries and should run for several hours without issue on those alone. The carriage can also be plugged in to AC power and if you do that, it will charge both the carriage (if you have rechargeable batteries in it) and the iPad together. If it’s not plugged in, the AA batteries keep the rig going and the iPad is running on its own internal battery. The cool thing about the DD is that you can monitor all these battery levels easily from the DD app.

Just like with the CamRanger, the DD allows you to have compete control of your camera, either a Nikon or Canon DSLR. That means full digital control of aperture, ISO, shutter speed, white balance, shutter drive, etc. Basically, if you need access to it while shooting, odds are the DD can control it.

This includes focusing the camera. 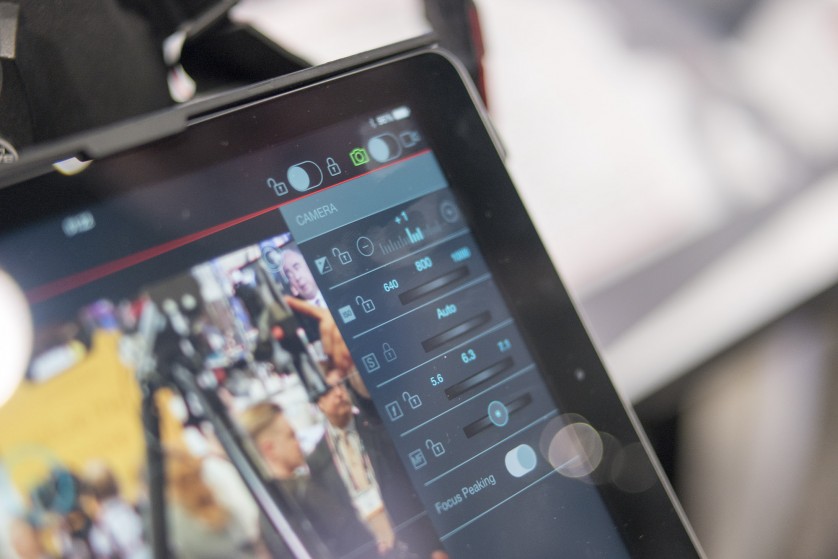 If you’re in auto focus mode, you can tap anywhere on the screen to tell your camera to focus on that point. Want to make even finer adjustments to the focus? You can digitally zoom in and be even more precise with it. 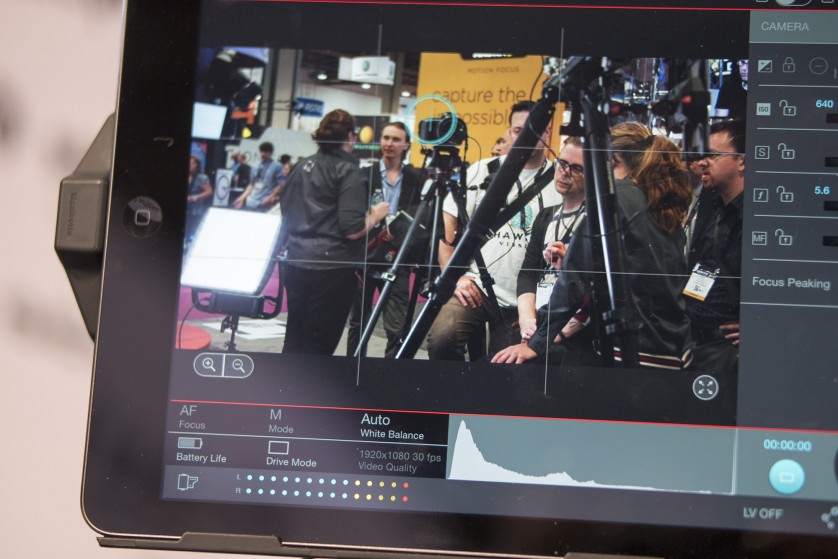 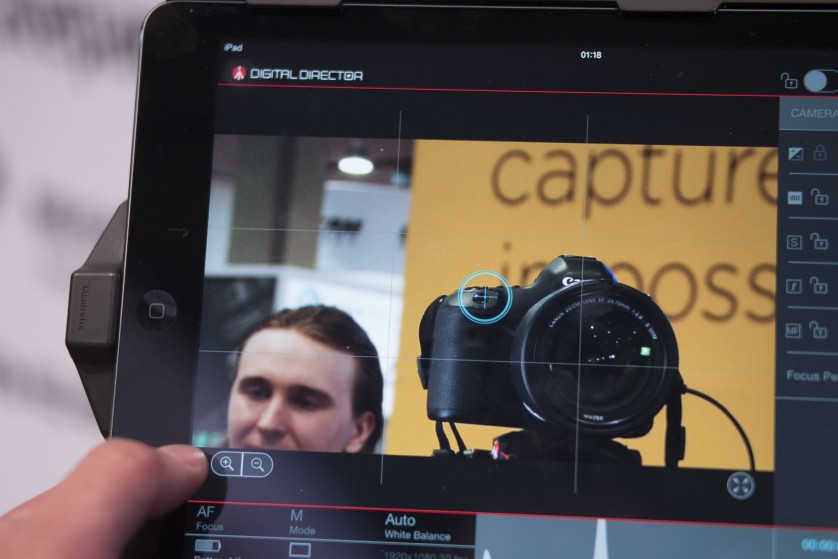 The digital zoom is nothing like what you see on the back of a Canon DSLR. It’s crisp and beautiful, and much easier to see what you’re doing. There is also a slider on the right hand panel that lets you toggle the focus manually.

Because the DD itself has a processing chip built in, it can actually pull real-time high resolution video feeds off your DSLR and display them on the iPad. This is one feature that blows away anything the CamRanger can do, as WiFi is simply not powerful enough to transmit live video feeds wirelessly. Because the DD only works when you’re tethered, it can use the direct USB feed from the camera and process it with its internal chip, giving you a real working field monitor in your iPad. 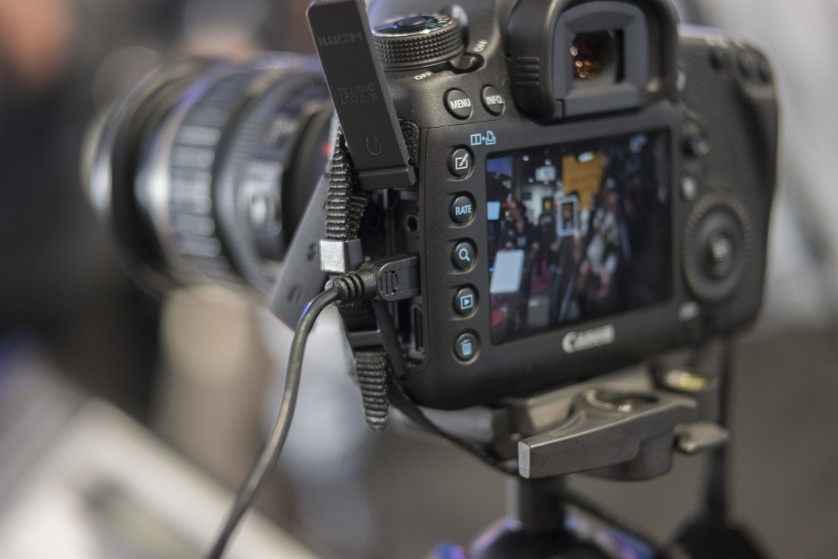 This feature was given to DD users in exchange for the near total freedom found in the CamRanger. With the DD, you must be within 10 feet (10 foot USB cable) in order to operate the camera. That means that architectural photographers who are already used to a CamRanger setup will likely see no reason to jump ship. The freedom of movement is too important to give up. Also, there really is no place for “client mode” like you can find with the CamRanger, meaning you’re really the only one benefiting from the DD when you’re on set. The whole “client over the shoulder” problem isn’t really addressed with the DD.

For video shooters, this really doesn’t play in at all and the DD is a far superior option. Real-time video feeds? Yes please. 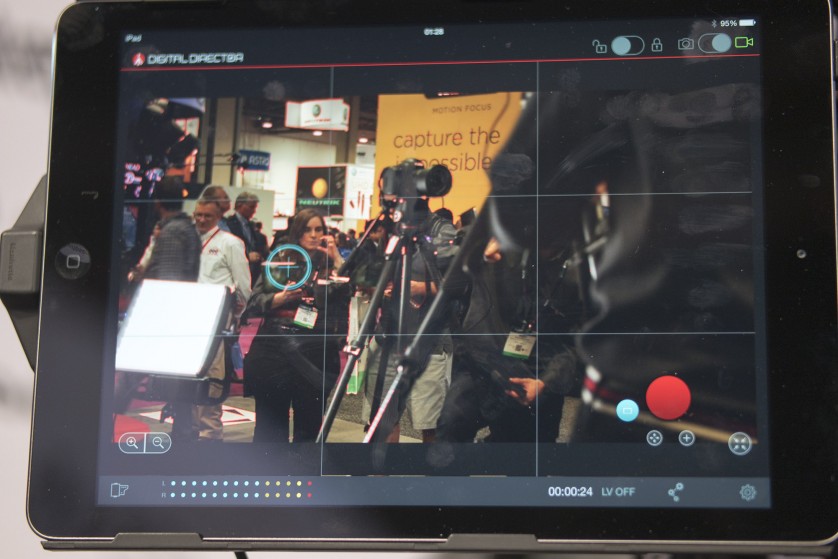 When you take photos with the Digital Director, depending on how you have your camera’s file writing set up alters how the DD manages the results. For example, if you’re only shooting high resolution JPEG, when you go to view your images, the DD downloads the full JPEGS. If you’re shooting raw and JPEG, it will only download the JPEG for viewing. If you’re only shooting raw, the DD can tell that you’re shooting in raw and will generate a high resolution JPEG for viewing on the iPad. This generating process takes about six seconds per photo (I clocked it during testing). That’s not too bad.

When you’re shooting with the DD, bear in mind you don’t get a filmstrip like you do when shooting with the CamRanger. If you want to see images, you have to tell it you’re interested based on small or medium sized thumbnails in the filmstrip page. The thumbnails are fine, but they aren’t quite large enough to determine if you like the photo or not. In order to do that, you will want a higher resolution file to work with. The DD will then pull down the files onto your iPad as you request them, giving you that higher resolution look-in. However, this is a full download and those files are then stored on your iPad until you choose to delete them.

This has pros and cons.

The advantage? Digital Director is set up for immediate sharing via FTP, email or social networks. With one tap, you can send a photo you just took on your DSLR to basically anyone, anywhere. This is a great feature. Also, you get the full resolution file on your iPad which means full resolution zoom showing all the crisp, glorious detail. 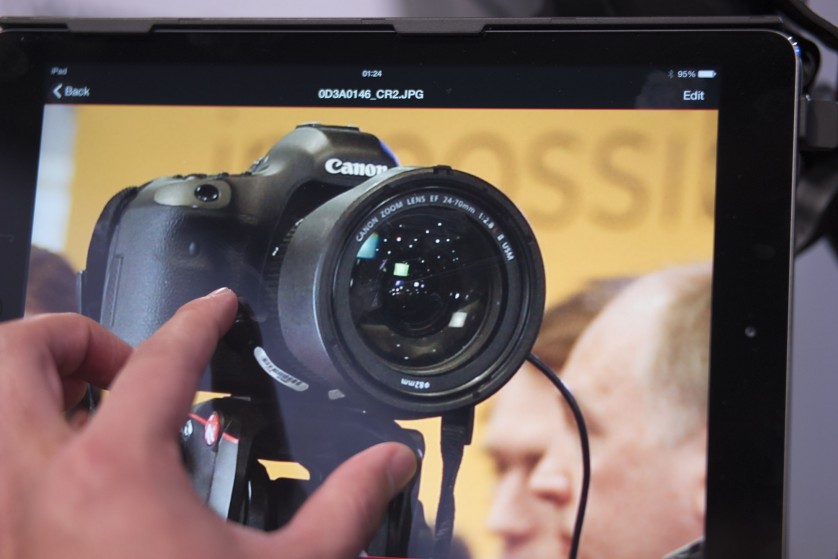 Manfrotto also built in a Adobe Bridge-esque filmstrip area where you can see all the files your DD has shot while connected to the camera as well as the ones it has downloaded. You can then rate and sort them by those ratings. Unfortunately this rating system doesn’t translate over to any other program, which makes the rating system somewhat useless for those who plan to edit the files on their computers later. It’s a nice thought, but ultimately doesn’t do much for me. 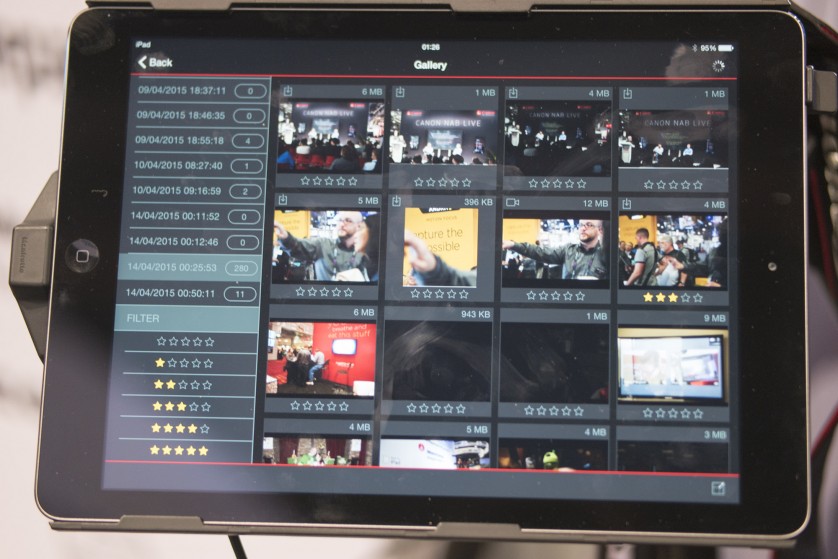 In addition to sorting and rating, there are some tools also included for minor editing. Crop, adjust, etc., but they are all JPEG only and all destructive. In Manfrotto’s eyes, you could shoot, sort, edit and share all from your iPad. And within some restrictions, you can. It’s just that anyone using a Digital Director is likely a stickler for detail and will want to do this kind of work in Lightroom. Any work you do in Digital Director is going to have to be repeated in your “real” post processing workflow. Again, it’s a nice thought and a good concept from Manfrotto, but it’s not quite there.

The downside of photos living on your iPad? Well, your iPad is now clogging up with high resolution photos. It’s a shame there is no way to just display images from a “session” instead of permanently pulling everything all the time. That, and not having a whole session automatically and instead having to manually tell the DD to pull them from the camera is a let down. 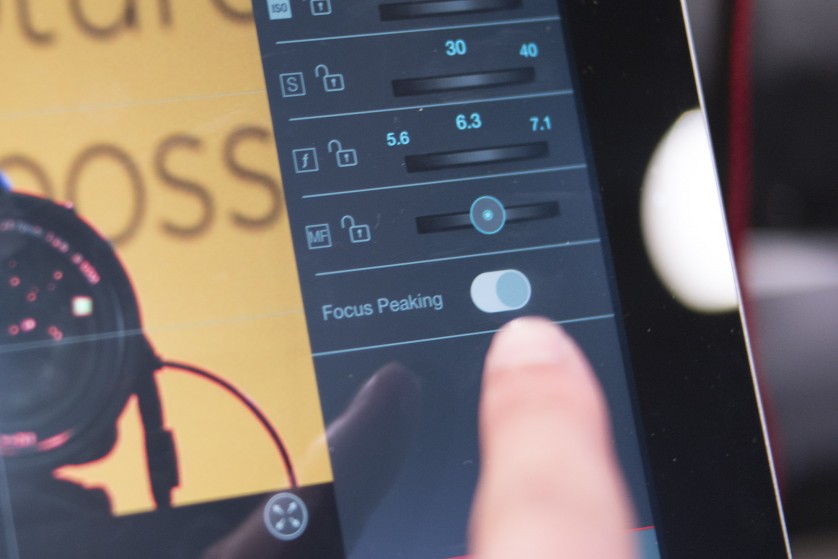 I cannot tell you how exciting this is for a video guy. After having focus peaking on my GH4 and then losing it when going to a DSLR, life is truly painful. Having it again is wonderful, and DD users have it in either Still or Video mode. 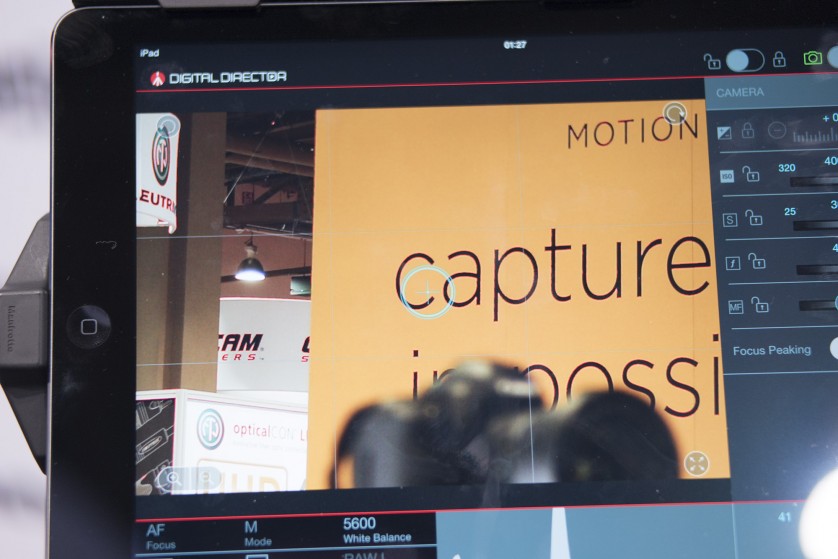 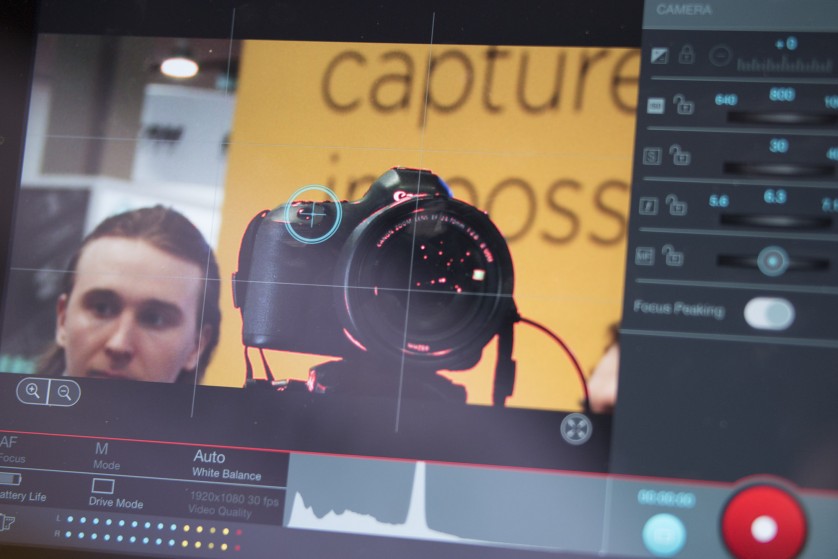 Manfrotto currently has only included one type of Focus Peaking color, but they have said they plan to add more. It’s just a matter of an app update, so this should not dissuade you from picking up the product in its current form.

Speaking of modes, the Digital Director lets you know when your camera mode and what mode you’ve selected on the app are not in sync. If the logo isn’t green, you’re doing something wrong. I like it. 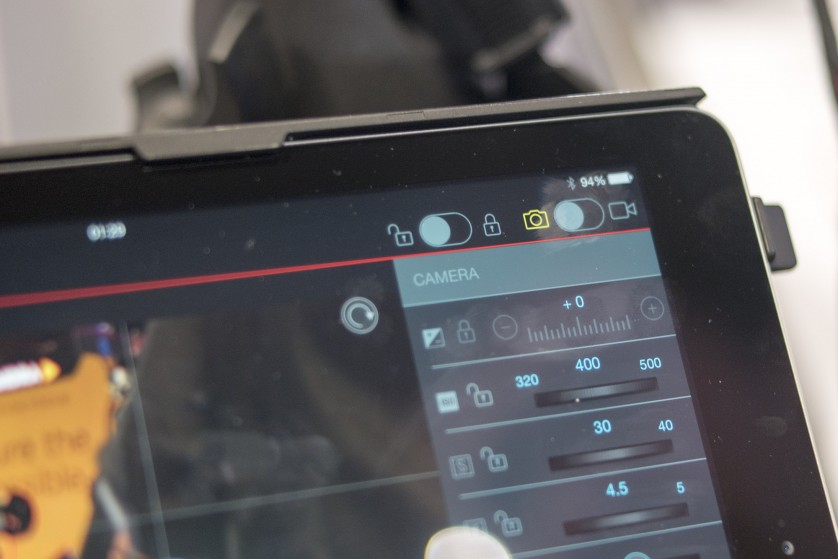 Some minor quips on the overall use: I like the idea of slider wheels to control settings in theory, but find them somewhat inaccurate in practice. I prefer the CamRanger method which is a tap, list, tap again to select. The White Balance selector on the Digital Director does this, but you have to deal with a scroll slider wheel for most every other major setting.

If you take video with the Digital Director, unfortunately you can’t see those videos on the iPad. Because of the way that the cameras transfer data feeds, they can’t be pushed to the DD or the iPad via USB. So when you’re using this in the field for video, it can feel like a less than full featured field monitor. Manfrotto has said they’re working on an HDMI solution, but that would require adding a new port to the DD, which means a new DD entirely. This is a shame, as watching videos I’ve taken in glorious Retina Display would be absolutely killer.

The Digital Director is a very, very cool product. It does a heck of a lot right, missing on only a few areas of note. Right now, the Digital Director will only work with Canon and Nikon DSLRs, but Manfrotto has said they are rapidly planning on expanding to more compatible cameras. For me, the biggest benefit of the Digital Director, and simultaneously the biggest problem I have with it, comes in video. Having my iPad perform as a field monitor is brilliant. I love the idea of multitasking products, and the screen on my iPad Air 2 is glorious (Manfrotto also makes a compatible iPad Air version). However, the inability to play back anything I’ve shot for viewing on the iPad is really unfortunate. Hopefully they come up with a solution, because that would make this an absolute must-have for video guys. That, and support for other camera brands like Panasonic, Blackmagic or Sony, will make this a much more flexible product.

On the flip side, for Canon and Nikon DSLR video shooters, the focus peaking is really, really excellent. Forget not being able to view what you’ve shot, you’ve finally got focus peaking without camera hacking! That’s a major, major win.

In the end, though Manfrotto has pointed the sights of the Digital Director at CamRanger, I don’t really believe the two products are built for the same kinds of photographers. Certain folks will gravitate to the features of the CamRanger, while others will find the Digital Director more to their liking. For now, I think they can both play nicely in the same space.

We give the Manfrotto Digital Director a solid four out of five stars for a beautiful app design and excellent and reliable functionality with a few quips that keep it from perfection.

EDIT: After publication, we felt the need to clarify the camera roll and the filmstrip features of the Digital Director. Though you do still have to download the images to actually view them in anything close to even quarter resolution, any photo you do take while connected to your camera will show in a thumbnail view in the filmstrip page, but the thumbnails are quite small, and pretty unusable for viewing purposes. There are two sizes, medium and small, but neither of them are nearly large enough to accurately gauge the success or failure of a photo. Also, the fact that the thumbnail page is not on the same page as the shooting page breaks up the process in a way that could be smoother. We have updated the article accordingly, yet still feel our original assessment of the way the images are handled is sound.