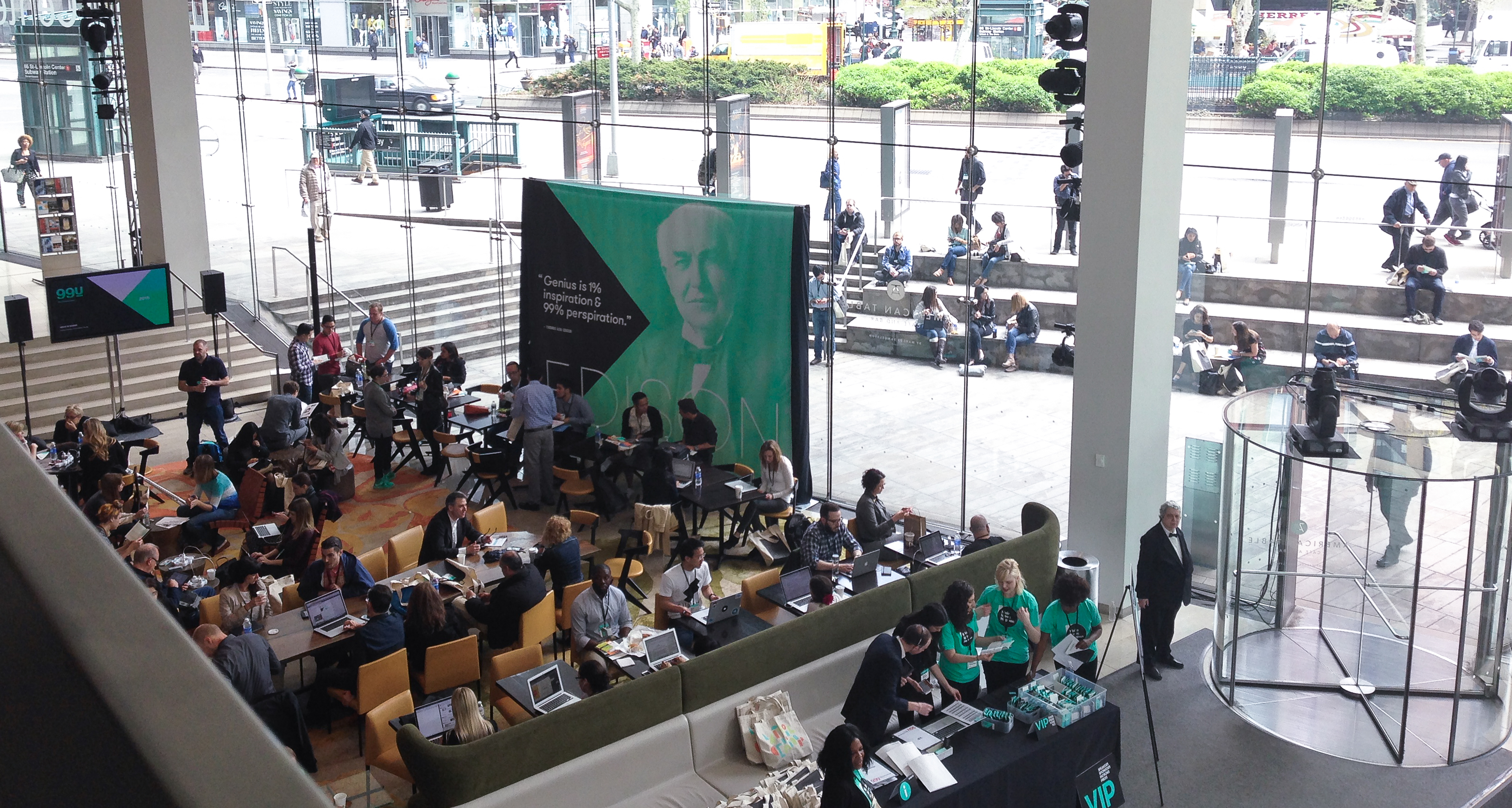 Last week, Behance held its annual 99u Conference at Alice Tully Hall in New York, giving way to two days of speakers, workshops, networking and parties. Intended to shift creators’ focus from idea generation to idea execution, I’ve assembled 99 takeaways from the conference; ones that, if consciously applied, will optimize your workflow, creativity and help turn your work from good to great. And this goes for anyone, from app developer to photographer. So let’s begin. 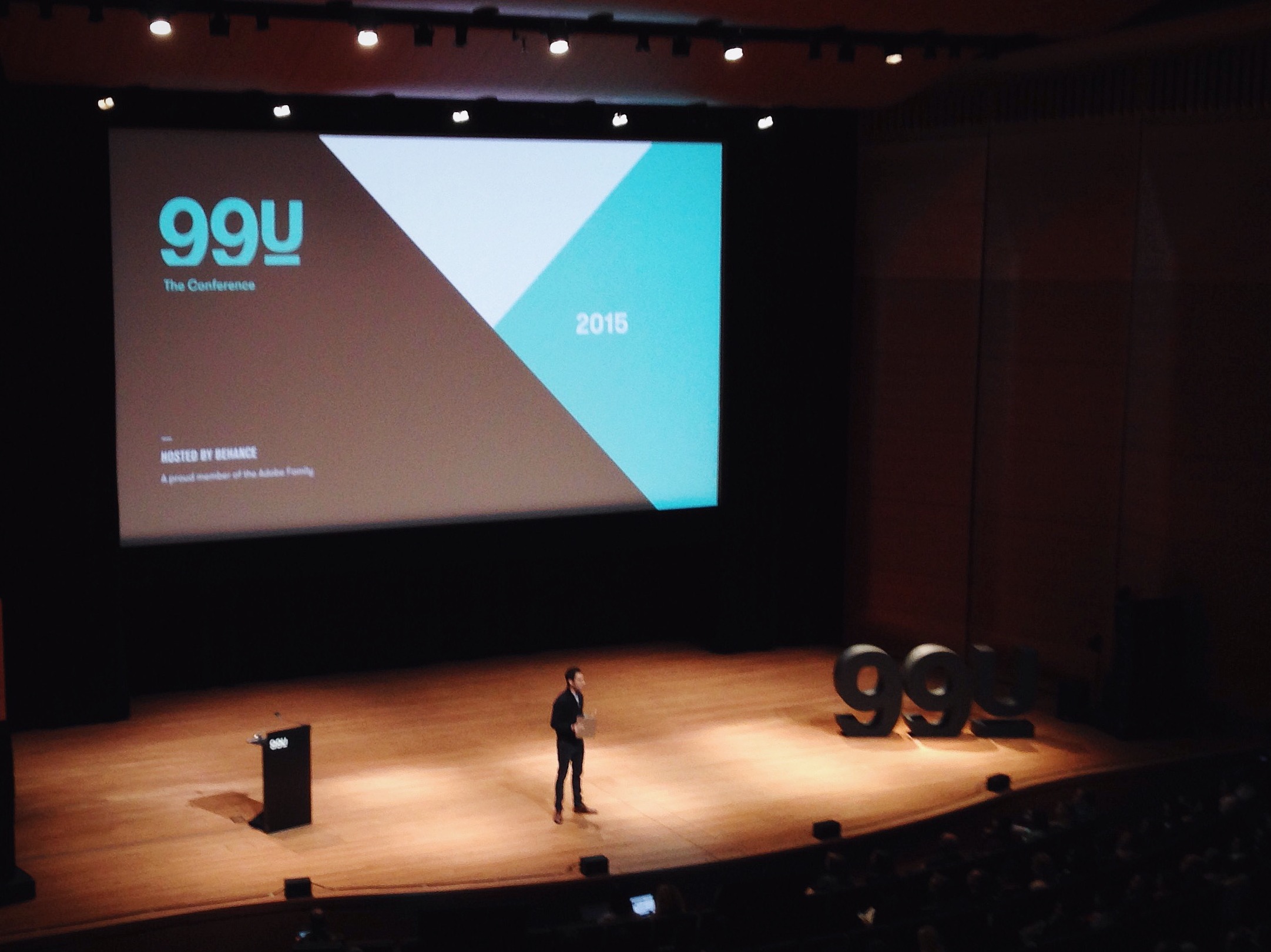 99. Generate ideas based on what problem your idea is solving.

98. At least half of this audience has dropped out of college.

97. Not everyone is a founder. We each have our own “superpowers” that should be utilized.

96. Most of this crowd is here for the first time, including myself. My guess is it’s due to this year’s new application process for tickets.

95. There’s nothing better than a free Action Book notepad in your swag bag.

94. Using an Android and Surface Pro combo is a joke that never gets old with this crowd.

93. Focus on and celebrate your outcome, not your output.

92. Be open to the thought that someone could do your job better than you.

90. Nearly any psychological theory can be illustrated with the Simpsons. 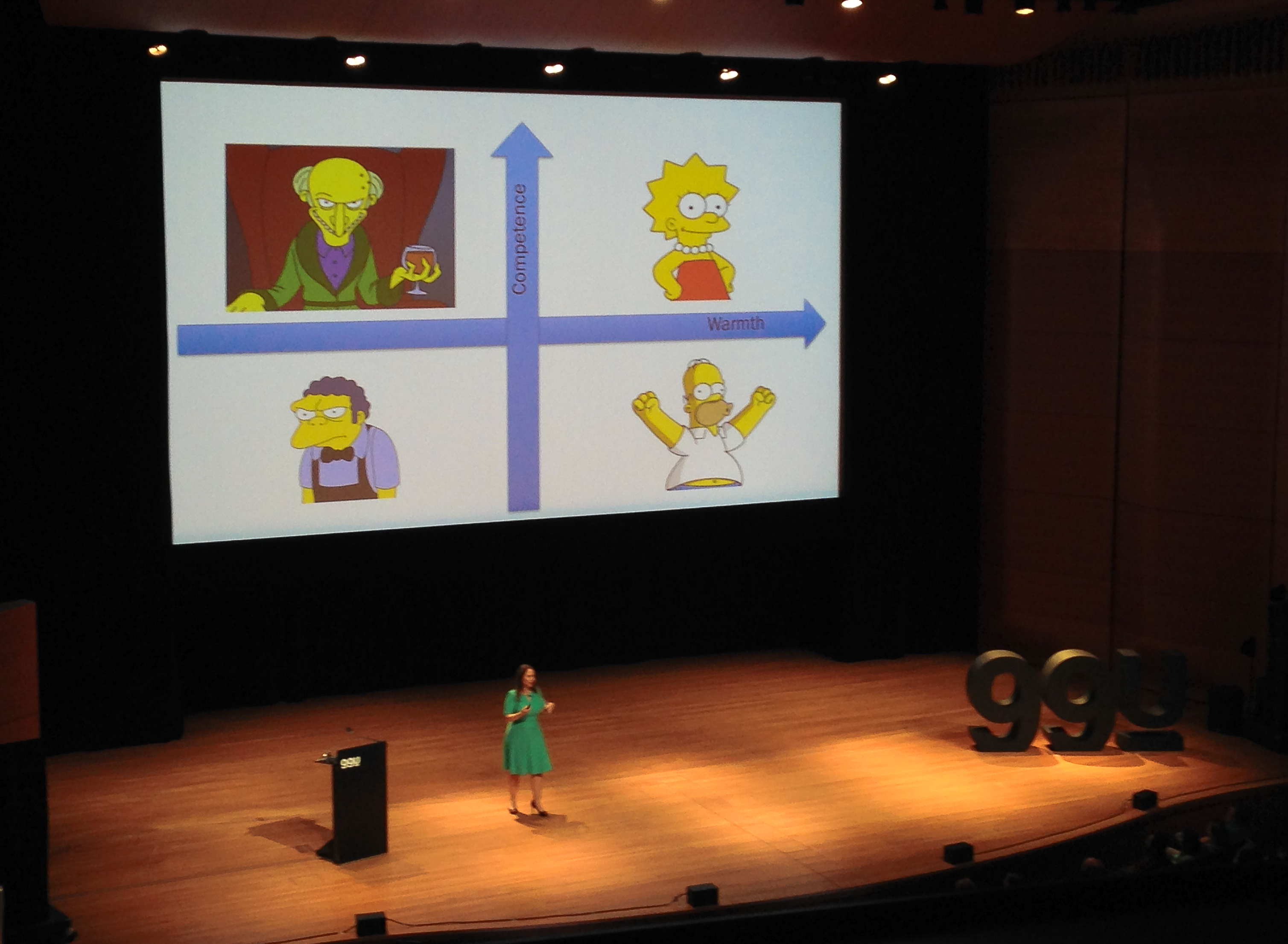 Heidi Grant Halvorson, author of No One Understands You, and What To Do About It

89. Doing a great job will not get the attention of a powerful person. Instead, find their goals, decide where they align with yours, and present how you can be instrumental in them achieving those goals.

88. Despite what data shows, the idea that mentoring from those who’ve “been there” is not always required.

87. Chase Jarvis, CEO and founder of CreativeLive, is the man, in fact.

86. It’s essential to establish trust with your colleagues collaborators and clients. To do that, project warmth and confidence.

85. Projecting warmth can be done by maintaining eye contact, smiling, nodding and listening.

84. We continually use old tools to solve new problems.

81. Mobile is the future. Enough said.

80. The highest concentration of creatives between 18 and 22 years old is in Egypt and Indonesia.

78. No more than five percent of the 99u audience is from New York.

77. Stress is a barometer for how engaged we are.

76. People who have a meaningful life experience more stress than those who do not. But it’s how to you think about stress that defines its role in your life.

75. Embracing the beneficial aspects of stress, such as what you learned from a painful experience, can prevent the negative symptoms of it.

73. Branding is just as important for b2b (business to business) companies as is for others.

72. ….If a dog was bred from a wolf to be a companion for humans, then imagine what we can do with robots.

71. Technology is a mirror for ourselves—machines have the ability to pull the best and the worst from people.

70. FOMO (Fear of Missing Out) is the reason why makers make, investors invest and consumers consume.

66. Brand is an idea expressed through a system that builds culture.

65. Apple isn’t selling computers, they’re selling creativity and expression—which is bigger than the functional elements of their products.

64. Branding is investment in the growth of your business—it’s the competitive advantage, a recruiting tool, press strategy and fundraising strategy.

63. The idea doesn’t matter at the end of the day, it’s about the execution and the follow through.

61. Investors are people too.

60. The highest concentration of creatives between 29 and 34 years old is in Germany.

59. Branding is not about logos.

58. Geoff Dowd is a stellar dancer.

57. Thinking, “We’ll rebrand after our next round” is highly inefficient.

55. Plan on branding your business from the very moment of your launch.

54. Katz’s Deli pastrami sandwiches are iconic—and always will be.

53. Countless repetition will lead you to consistency.

52. Push beyond your comfort zone. The thing that feels uncomfortable, is likely the thing you can grow into, differentiate and own.

51. Wine over beer is the best choice at an open without liquor.

50. The highest concentration of creatives between 23 and 28 years old is in France. Look out, Brooklyn.

49. Your creative process can be broken down systematically into steps:

46. Step 3: Formulate your ideas before creating them.

44. Conflict is fundamentally about mindset. Explicitly embracing it will allow you to take control of it.

43. Emoticons are a quintessential part of a presentation if you’re trying to pull a laugh.

41. Fear is one of the biggest hurdles in your creative process.

40. This fear can be broken down in three categories:

38. 2:  The idea that your work is irrelevant and soon you’ll be broke.

36. Perhaps the most simple, yet overlooked, solution to your creativity it to practice and get better.

35. Your creative life insurance is to step away from your work and set aside time to do something you’re passionate about.

34. You’ll be much more content if you accept that something great either happens or it doesn’t. It can’t be forced.

33. Before you can be successful you must define what success means to yourself.

31. Adobe can throw one hell of a party.

30. When you’re dealing with powerful people, don’t kiss up to them. Instead, present a solution that brings them closer to the goal they’re for.

28. There are five steps to becoming a professional discomfort provider, also known as a creator.

22. If you’re an artist, you will likely be misunderstood, deliberately, by people who fear you. 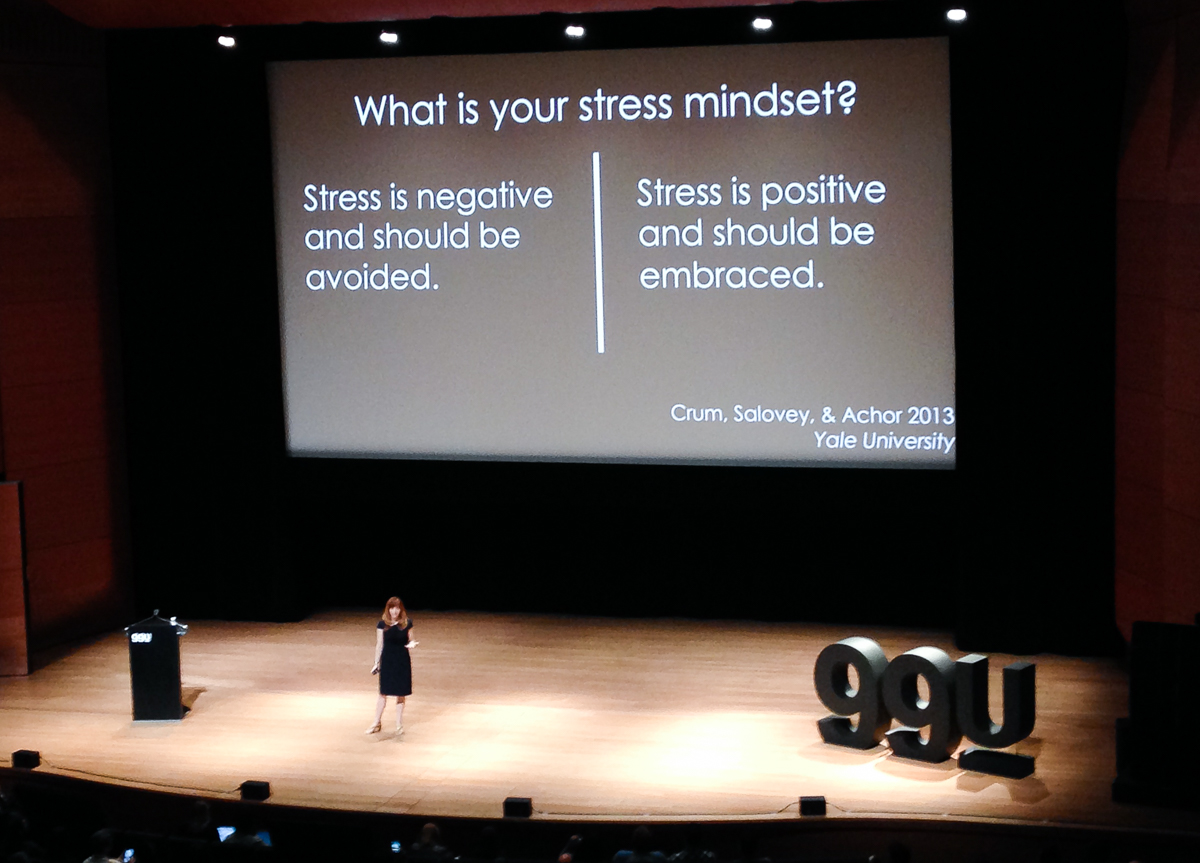 Kelly McGonigal, author of The Upside of Stress

20. There will always be that one guy who will take a photo of the “Billy Murray” on my name tag.

19. This conference is crawling with poachers.

18. The point of art and fiction is to connect to ourselves and other people. Art, story and myth are the lifelines that connect us to one another.

17. Owning the pain of the grind incites genius.

16. It’s easier to build a huge business than a small one.

15. Hip-hop night at Pianos is a strange place to party with your boss.

14. Doing the right thing is not a passive act. You don’t get to be the good guy just because you’re not being the bad guy.

13. There are three classes for innovation and success: Shorten. Leverage. Soar.

11. In creating, hierarchy is dead.

10. We’re all entrepreneurs now. Everyone last one of us.

9. Purpose is the bottom line in creation.

8. The fact that a class called “Reimagining Capitalism” is taught at Harvard Business School is proof that we’re part of a very revolutionary time.

7. View a decision as a start, not a finish.

6. “Follow the money” will never do you wrong. Thanks, Deep Throat.

5. Much of our friction and hesitation is self-generated.

4. Ambition requires a war against hesitation.

3. Success is suspending your hesitations against yourself.

2. Your last creation is your greatest competition.

1. Thomas Edison was right when he said “Genius is 1% inspiration, and 99% perspiration”—these 99 takeaways are making me sweat.

Click here to read 99 more takeaways from our 2016 coverage.