When G-Tech first showed me the G-DRIVE ev ATC earlier this year at CES, I wasn’t sure I believed them when they told me it was shock, dust and water resistant, to the point of being able to be submerged. I also couldn’t think of a particular case where this might happen. However, after giving it more thought and considering the crazy stuff photographers do, I did come up with a situation I believed was worth testing.

You see, I could have just taken the G-DRIVE and tested it in my kitchen or bathroom by holding it under water… but that seemed to be completely out of what to expect from a real life situation. Honestly, when would I ever do that? Instead, what seemed more likely, is that I would drop the G-DRIVE into the ocean on accident when shooting on location. For example…

Ok, generally I would have to be somewhat irresponsible to really just huck this thing into the ocean, but it could happen. So I gave it my best shot (also see the video at the top of the page). 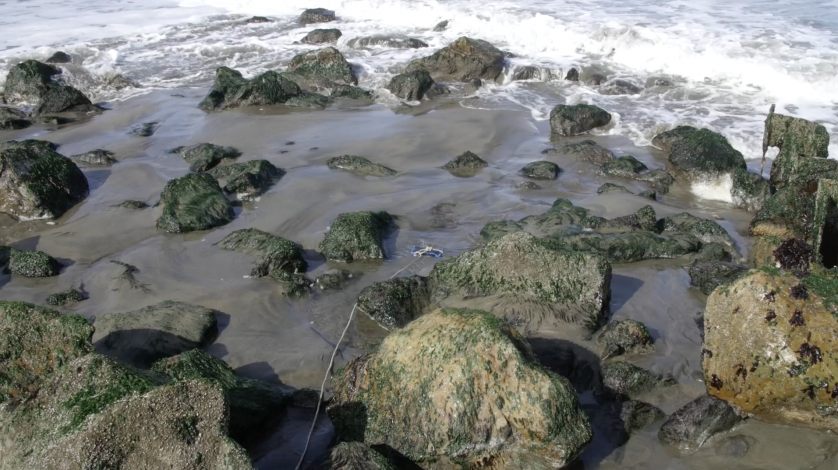 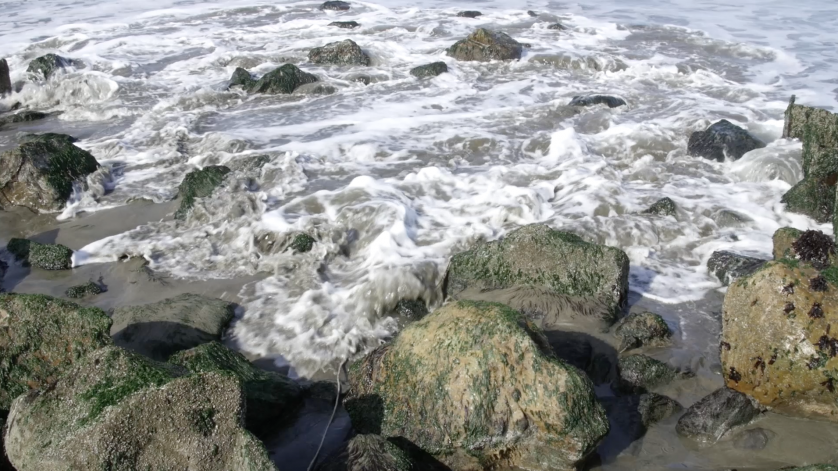 In all honesty, I did this twice and at two different beaches. The first time I tried it, I had some data problems and lost the footage (how ironic, since I’m testing a device that is supposed to help alleviate that kind of thing. And to be clear, the data loss had nothing to do with G-Tech. It was all my bad and improper formatting of cards). But the second time you can see above, and not only does the device float as promised, it also gets fully submerged. G-Technologies says the following on what the drive is supposed to survive:

I threw this thing in the water, banged it against rocks to clear sand out, and watched it get sloshed around by seawater against rocks and more sand. What resulted was this: 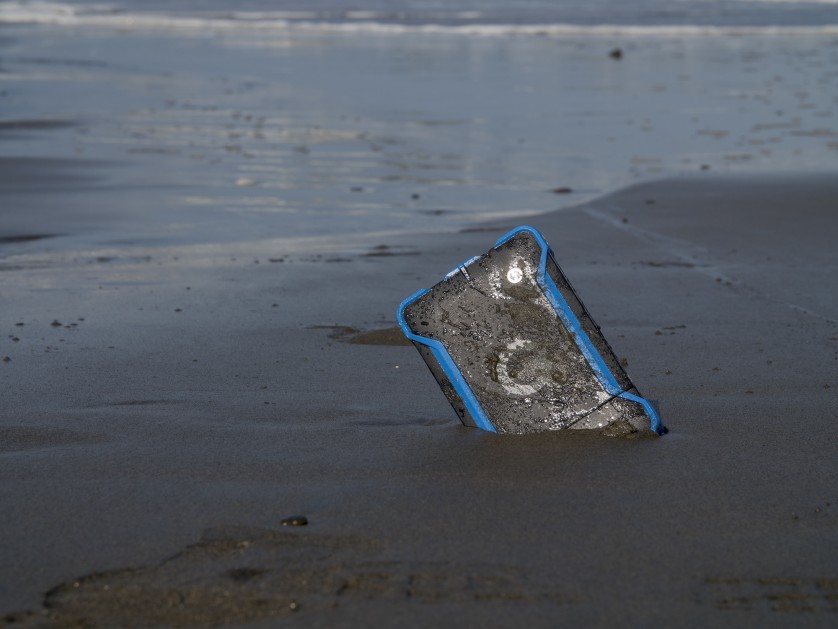 I don’t own a single hard drive other than the G-DRIVE here that I would remotely trust in that situation. While doing this, I didn’t have any hope that the drive was going to survive. Maybe a dunk in fresh water in a controlled environment, but the ocean is a totally different animal. The temperature, the salt and the sand really add another layer of complexity. It shouldn’t survive.

It and the multiple gigs of files I had thrown on there (mostly timelapses) survived without much worse for wear. Sure, there was sand in the crevices and the whatnot, but the data was safe. This, to me, was hugely impressive.

Aside from the G-DRIVE’s seemingly inability to die, there are other benefits to this hard drive worth mentioning. 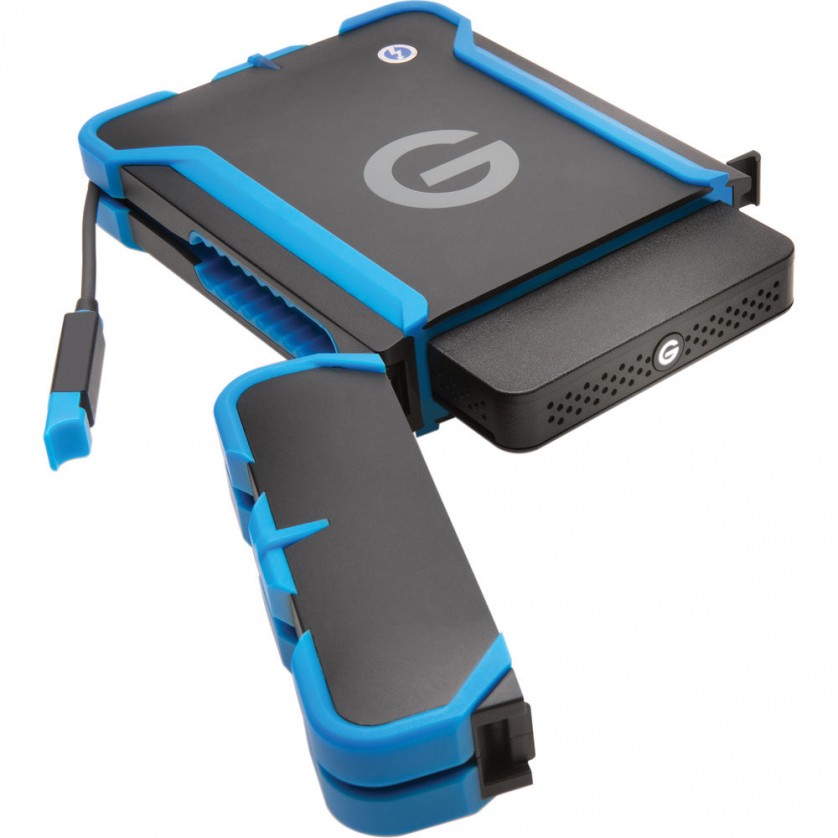 The part that is water resistant and has the thunderbolt cable is actually just the case. The interior of the device is the same drive that fits into the G-Technology G-Dock, meaning if you’re already invested in that system, this is just one more piece you can add to it, giving you more flexibility with your data storage. The interior being removable also means that if for some reason you break the Thunderbolt cable or damage the case beyond repair, your data can still be removed on the interior drive and replaced in a new G-DRIVE Thunderbolt case. Or, if you need the data immediately, the interior drive has a USB plug for access outside of the case. 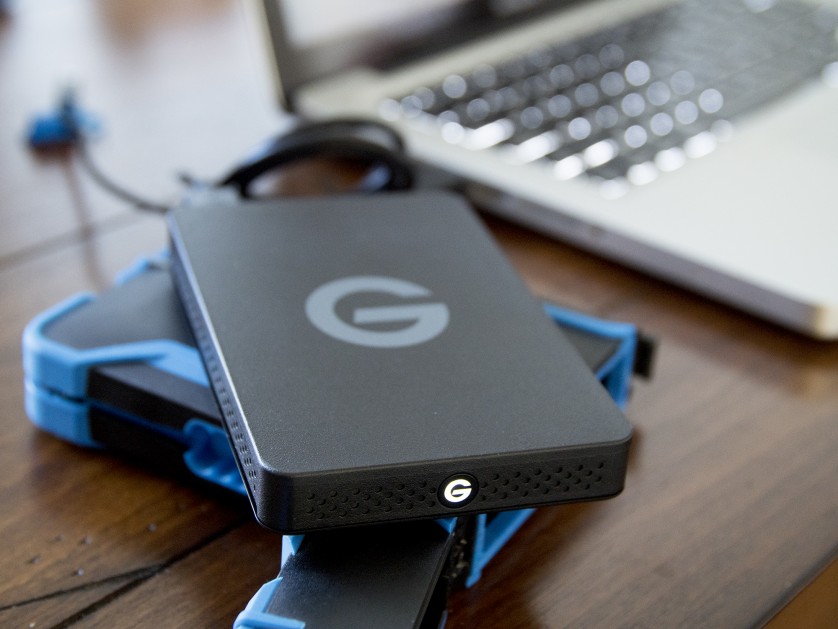 There are only two real “downsides” I found with the G-DRIVE, and they might not affect you as a user at all:

1) The drive together with the case is rather large, from a sheer bulk standpoint. Most drives I use when traveling are small and lightweight, and though the G-DRIVE doesn’t weigh much, it does take up a lot of real estate in my camera bag. It’s 6.46 x 4.25 x 1.20″ which is considerably bigger than my other drives.

2) It’s not particularly fast. Though rated for 136 Mb/second, and I did get around that in my testing, it’s not fast enough to be a working drive if you handle video. It’s also not particularly fast when it comes to simply transferring photos or video. The whole “but it’s Thunderbolt” thing can kind of confuse people (as I found out while talking to other photographers who also had the drive). Just because it has Thunderbolt, they assume it’s fast. Though Thunderbolt is faster than USB, you’re still limited on the max speed of the drive, which is the case here. It’s fine for storing photos and dropping them in, but it’s not fast enough to be a working drive when editing. Just bear that in mind. If you’re going to use this strictly for photos, you should be fine to store and edit. My complaints here are restricted to solely video.

The G-DRIVE ev ATC Thunderbolt is true to its word, being resistant to real-life rugged situations (like dropping the drive in the ocean). It’s also modular and works well with those who are already fans of the G-Dock system. I was honestly surprised how well it handled the elements, and the multiple options I have to get data off the drive made me feel even better about putting the drive through some punishment.

We give the G-DRIVE ev ATC Thunderbolt four out of five stars for excellent resistance to the elements at the cost of being a bit bulky.