Update – It appears Taylor Swift may be closer to the wording on this contract then we originally thought. Read our update here.

Taylor Swift continued her crusade against online music streaming services by penning an “Open Letter To Apple” in which she states that it is unfair, and even exploitation, to not pay musical artists for the 3 month free trial that Apple is offering to new subscribers. While I don’t know Taylor Swift’s music from a hole in the wall (Get off my lawn!) I do agree that I think the music streaming business model is flawed. The real winners in this battle are us, the end user, who get access to almost every song every recorded for $10 a month. Remember when you used to pay $15 for a CD, only to drop it on the pavement and scratch the hell out of it that same day?

Well, this post isn’t a debate on whether Swift is right, it’s a report coming from the blog concert photographer Jason Sheldon of Junction 10 Photography, who calls out Swift for being a hypocrite when she claims that it’s unfair to not pay an artist for their work. Sheldon produced a contract that he had to sign when photographing a recent Swift concert. 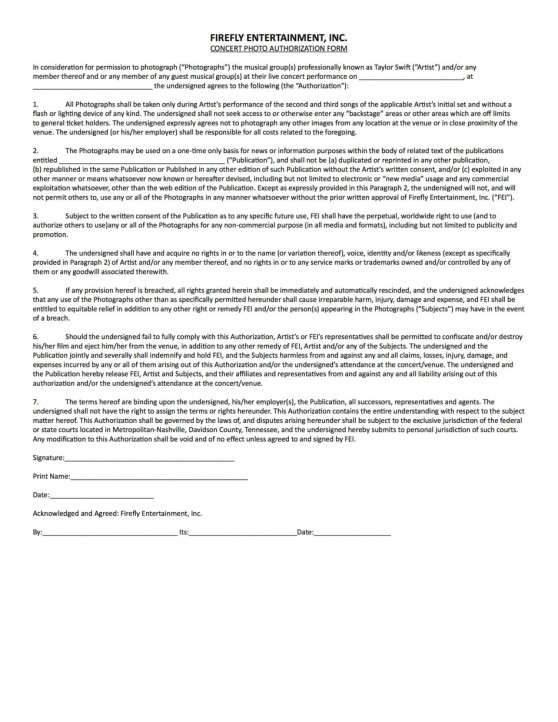 Sheldon’s issue with Swift arises from points 2 and 3 of the contract, which essentially states Swift and her promotion company can use the photos exclusively for whatever use they see fit, without compensation, while Sheldon is not allowed to re-license or even use the photographs in any self-promotion, most importantly, his portfolio.
Sheldon states on his post:

Now..  forgive me if I’m wrong, but if you take points 2 and 3 in that contract (which is provided to Photographers who need to agree to those terms before they are allowed to do their job in photographing you for editorial outlets), it appears to be a complete rights grab, and demands that you are granted free and unlimited use of our work, worldwide, in perpetuity.  You say in your letter to Apple that “Three months is a long time to go unpaid”.  But you seem happy to restrict us to being paid once, and never being able to earn from our work ever again, while granting you the rights to exploit our work for your benefit for all eternity….

Sheldon later expands on what he means by being paid once.

As a freelance photographer, I am asked to photograph concerts by publications.  I get paid IF and when the photos are used, not for turning up to a show and shooting it.  Therefore, if the newspaper has a bigger story to run and doesn’t have enough room to use my photo, I don’t get paid.

When I’m not allowed to do anything else with the photos, that means I’ve incurred expenses to work, which I can’t recover.  Therefore preventing me from licensing my photos to more than one publication, or even (as later versions of this contract stipulate) preventing me from using the images for my own self-promotion in a portfolio etc while they can use them without licensing the usage is highly unfair and unjustified.

And tearing a page from the Swift playbook, Sheldon finishes his open letter in striking fashion.

Photographers don’t ask for your music for free.  Please don’t ask us to provide you with your marketing material for free.

While contracts aren’t my specialty, Sheldon does bring up some strong points in regards to Swift’s contract that is given to photographers before her concerts.

Chances are, Swift has no idea what this contract states, as this isn’t part of her job description of “Shaking It Out” (Ok, I lied about not knowing her music). But as Sheldon’s title states, shouldn’t those living in glass houses not throw stones?

What are your thoughts? Is Sheldon right to call Swift out?

Oh, and for the record, the Swift rant was successful, as Apple backtracked on their stance to not pay artists for the 3-month trial.