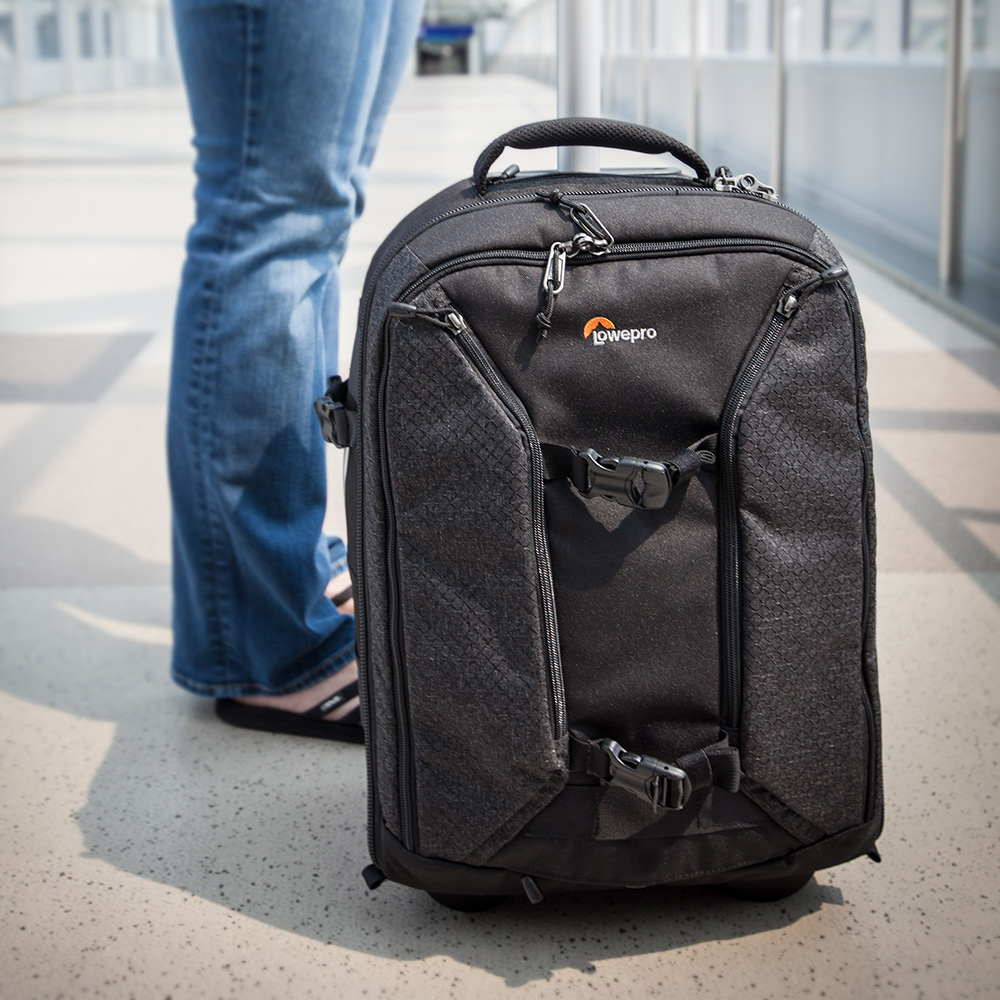 I’ve never been one to use a roller bag for my photography or video equipment, besides Pelican hard cases. My whole life I’ve used backpacks of one brand or another so that I can be as mobile as possible, as honestly I spend more time on uneven dirt trails than I do on city streets. That said, with the Lowepro Pro Runner RL x450 AW II, you have the option to do either. To explore how well it could perform, I took with me on a few local shoots, and then on a trip to Minnesota for some hiking and canoeing photography. I’ll use my examples to point out some of the bag’s features and hopefully demonstrate what worked well and what didn’t. 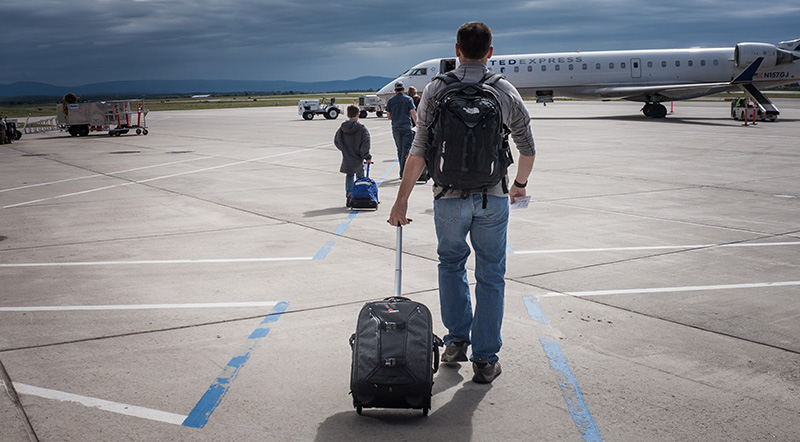 For brevity’s sake, I’ll just refer to this bag as the Pro Runner x450 from here on out.

Taking it around town for simple pickup shots


I’m a documentary filmmaker/photographer, who focuses mostly on projects involving the outdoors and locally-focused businesses. For the last few months I’ve been working on a series of web videos for a local tourism office in Southwest Colorado. The interviews have already been shot, so for b-roll I find myself driving around town, and capturing various clips of historic landmarks, popular restaurants, notable community events, and art galleries. Oh, and horses riding into the sunset, right through downtown. 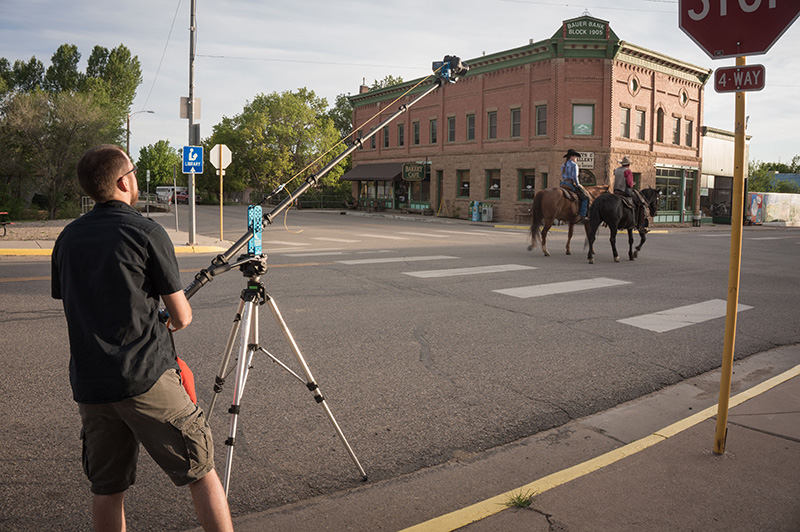 I was able to park within a short walk of all of those locations, so I left my bag in the truck for most of the day– it was easy to work with and did exactly what I needed. The Pro Runner x450 carried my GH4, along with a few lenses for video clips, and a Canon 5D for stills and to serve as a backup video camera. There was plenty of room, and the exterior padding is quite firm– a few bumps from rolling the bag around the streets wasn’t going to have much impact on my gear. I rolled it around to dinner that night for a few shots in a local farm-to-table restaurant, and it was great since the bag has a nicer appearance than my usual backpack-style camera bag, which is usually covered in dirt.

The Pro Runner x450 has a decent look to it– it’s not like some expensive designer leather bag, but it certainly doesn’t look cheap or poorly made. 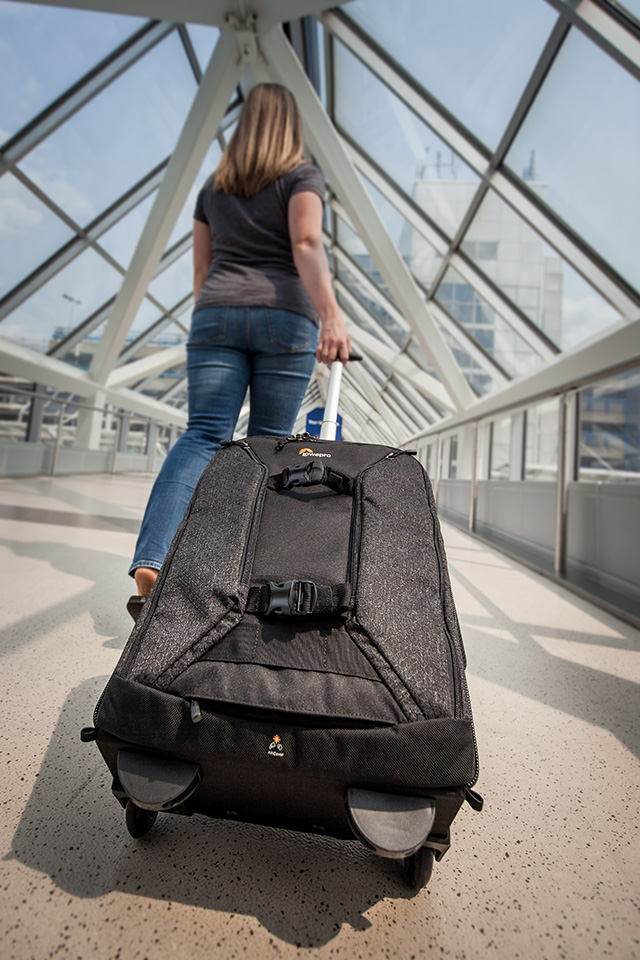 I had no problem with taking this to a client meeting, and then directly to a nearby café for getting some work done on my laptop. It has an outer zip with several sleeve-style pockets, and it was able to fit my 17” MacBook Pro (even though they advertise only fitting a 15″ laptop) along with a notepad and earbuds. (In the image below, it’s my 15″ laptop, I needed my 17″ to write the article!) 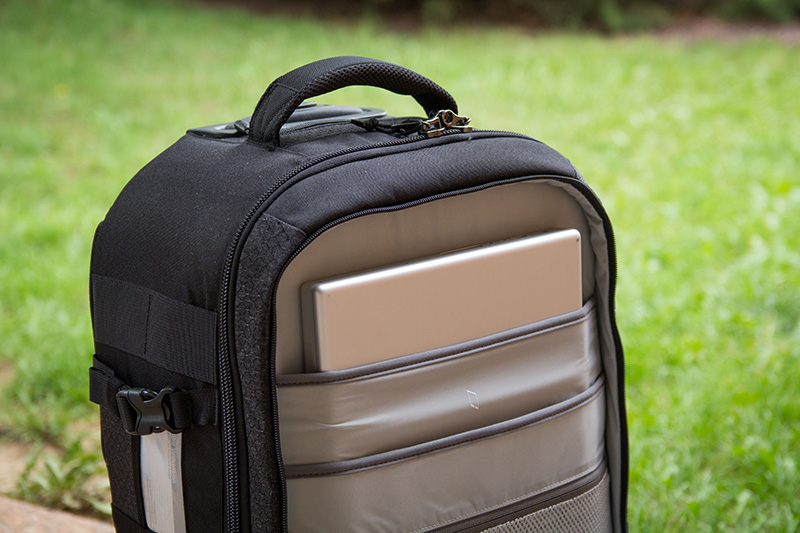 One thing I did notice while rolling the bag around that day was that the handle that pops out has a slight seam on the plastic mold. It was quite annoying between my fingers– I don’t understand why the rubber on the top of the handle doesn’t simply continue down to provide a softer, and better grip. 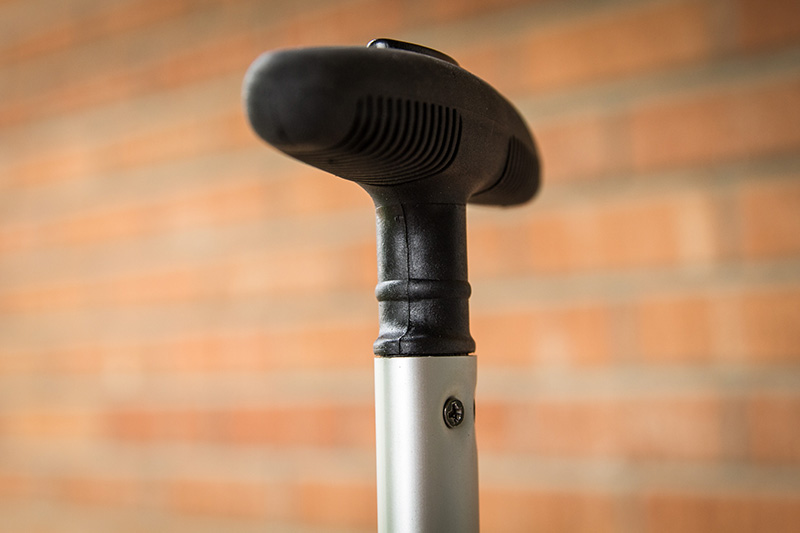 Taking it on flights


In early June, I flew to Duluth, Minnesota for the weekend to capture some images at Boundary Waters Canoe Area Wilderness (BWCAW). I packed it with my stills kit, including a Canon 5D, Canon 16-35, 24-70, 70-200, Tamron 15-30, and Sigma 15mm, among filters and other accessories. 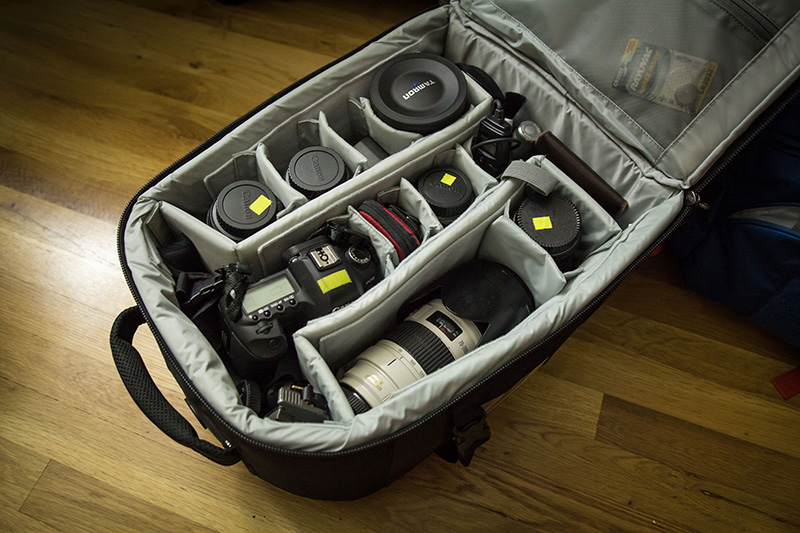 It was raining when we arrived at the airport in Durango, and thankfully the Pro Runner x450 has a built in weather cover, and my bag stayed nice and dry.

Since I fly out of a smaller airport, I often get connected to Denver via a small aircraft. On that day, it was a CRJ-700. These have smaller overhead bins than a typical domestic commercial aircraft, so I knew they would want me to gate check my bag.

On this flight the bag fit snugly into the overhead bin, and thankfully neither the gate agent nor flight attendant fussed with me about a gate check. 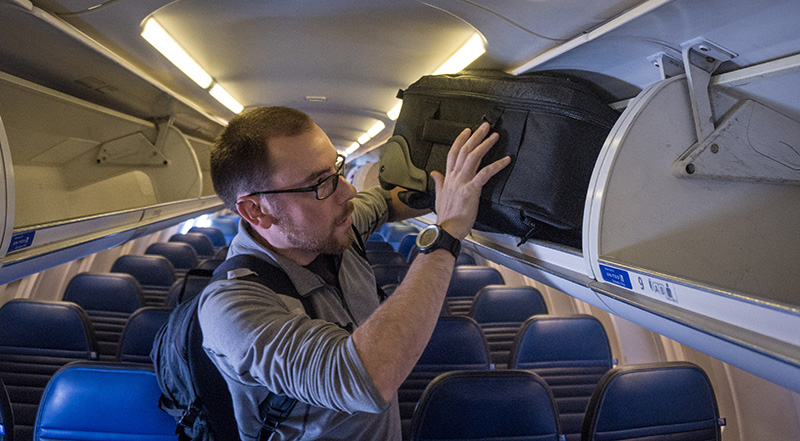 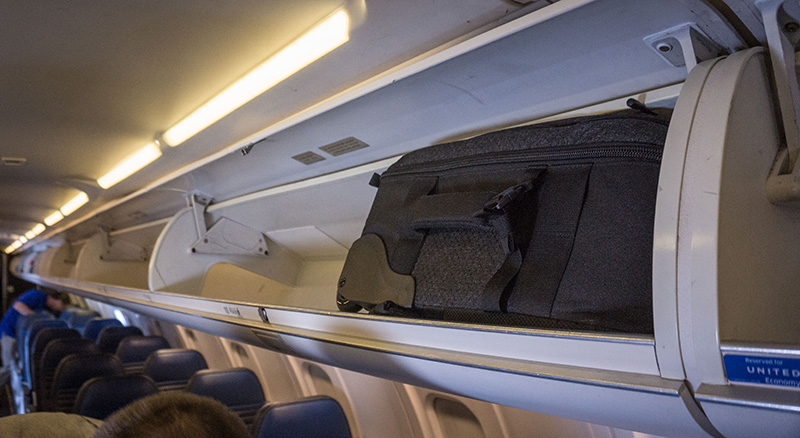 On a larger craft, there is plenty of room, as seen in the photo below where my connecting flight was on an A-320 Airbus from Denver to Minnesota. 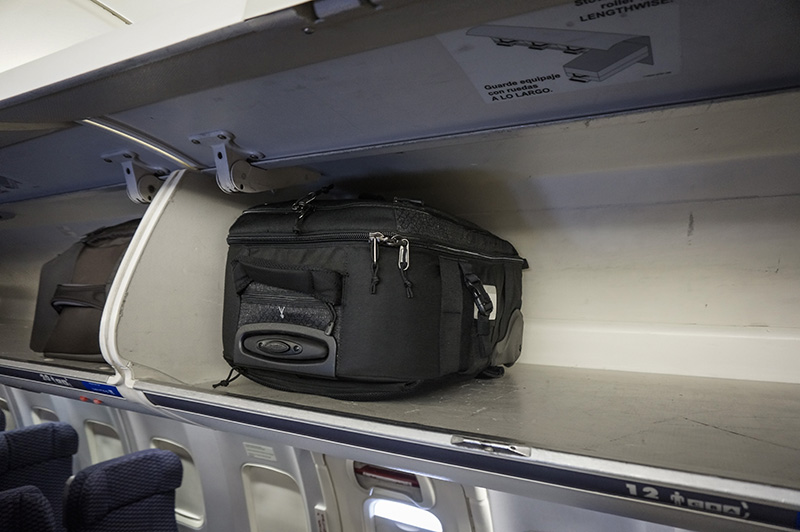 On my return flight from Denver to Durango a few days later however, the plane was a Turbo-prop style Bombardier Q400, and from my past experience with these, I knew it would not fit up top. The overhead storage area is about half the normal size, so the gate agents usually make everyone gate check their roller bags.

When I tried to take the Pro Runner x450 on board, the flight attendant immediately stopped me at the door and told me to take it back to be gate checked. I politely explained that I had expensive equipment and was uncomfortable with doing so, and this flight attendant, visibly disgusted by my remark, rolled her eyes so far into the back of her head that she could have probably pulled them out of her mouth. This is pretty much how it looked.

I’m not sure why she had to give me a hard time, but in any case, she let me bring it on board and it was able to fit underneath the seat in front of me, even though it did stick out just a touch.

I have to say that as a backpack, this was pretty uncomfortable. I was wearing it while full of gear and with a tripod, so it was about 33lbs according to my hand scale. After about a mile of walking a relatively easy dirt trail I was fidgeting with it and not enjoying how it rested on my lower back and pulled on my shoulders. 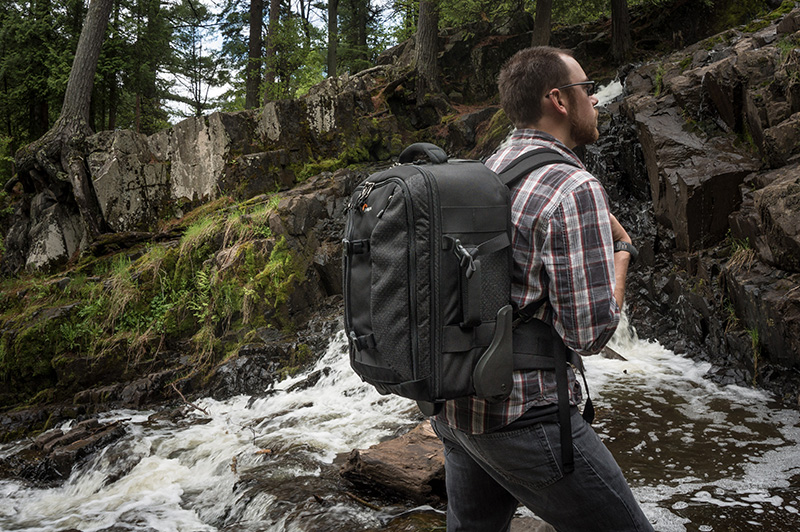 The hip belt is hidden away, tucked inside of corner openings. It’s a pretty tight fit so I had to fuss with it to stow them away when converting back to a roller (You can also pull it out completely.) As for the shoulder straps, you unzip a compartment from the top and pull them out, clipping them to small loops behind the hip belts. There are no top adjustments for these shoulder straps (which is strange since the other two backpacks in the Pro Runner series have them) and with a heavy bag it made balancing the weight comfortably pretty difficult to achieve for me. The hip belt also fit an inch or two too high for my liking.

Saying all of that though, it was SO convenient to have the option to convert this to a backpack! I went on a nature trail that was near town and I expected it to be paved given its location and accessibility. Turns out that it was not! It would have been a pain to carry that heavy roller bag by the handle for a mile, so it actually was great to strap it on to my back so that I could complete this trail– even if it wasn’t’ the most comfortable to wear, I appreciated the feature very much in this event.

During a day trip through the Boundary Waters, we had to portage our canoe, so strapping the bag onto my back made it so we only had to make one trip instead of two. The rain cover was awesome as water from the paddle was constantly splashing into the canoe while out on the lakes. 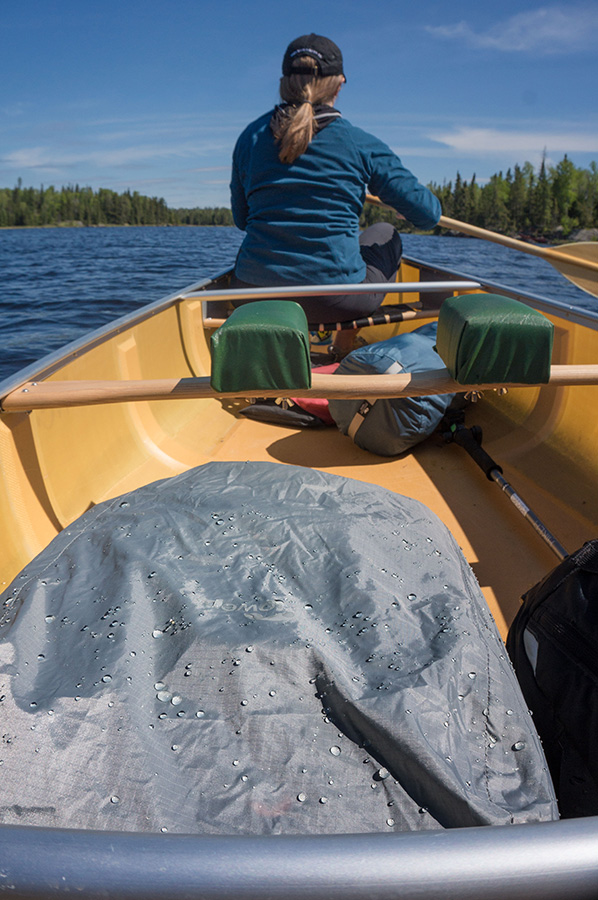 The backpack wearing ability isn’t something I recommend you do for very long, but for a short distance it’s totally manageable and beats lugging it by hand.

I’ll be honest– at first, I was very unsure I’d like this bag at all. Even without any gear inside it, I felt that the bag looked a bit bloated, and I was skeptical about it fitting into an overhead bin. The more I worked with it and used it though, I discovered that bag almost needed to be broken in a little bit, but also that the bloating was due to all of the features it had! Hidden shoulder straps, a hip belt, rolling handle, rain cover, and well-padded pockets. The fact that the Pro Runner x450 has ALL of these features, but can actually hide them out of sight and still fit into an overhead bin… is impressive. I’ve never used a rolling bag like this for my main kit before but after experiencing the Pro Runner x450, I can easily see myself using it in the future for certain projects. 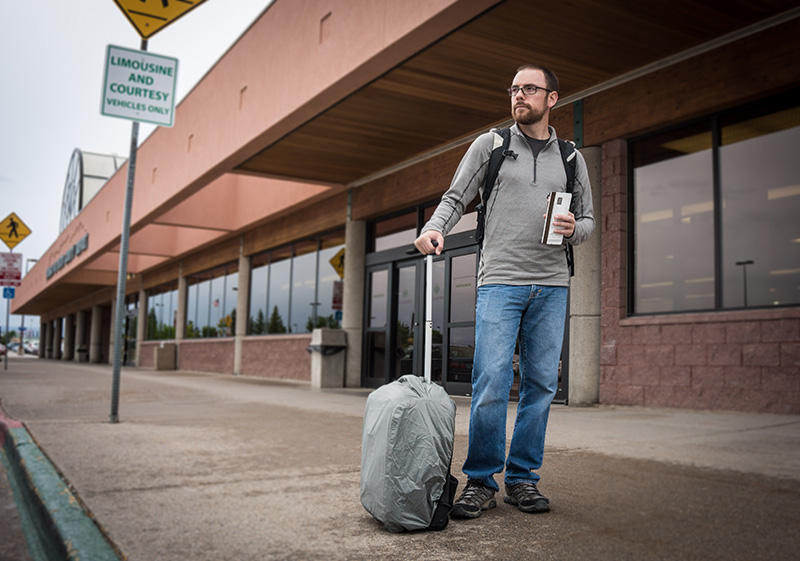 What Could be Improved

A few things jump out to me that could make this a better bag. I’d love to see adjustable shoulder straps, like the other Pro Runner bags have. Easier to stow hip belt pockets/straps, maybe with a small zip or flexible fabric? Or maybe some novel convention where the frame of the roller handle can be extended downward and becomes part of a height adjustable hip belt frame? Am I crazy? The easiest fix would definitely be a grip without that noticeable seam and a smoother feel. 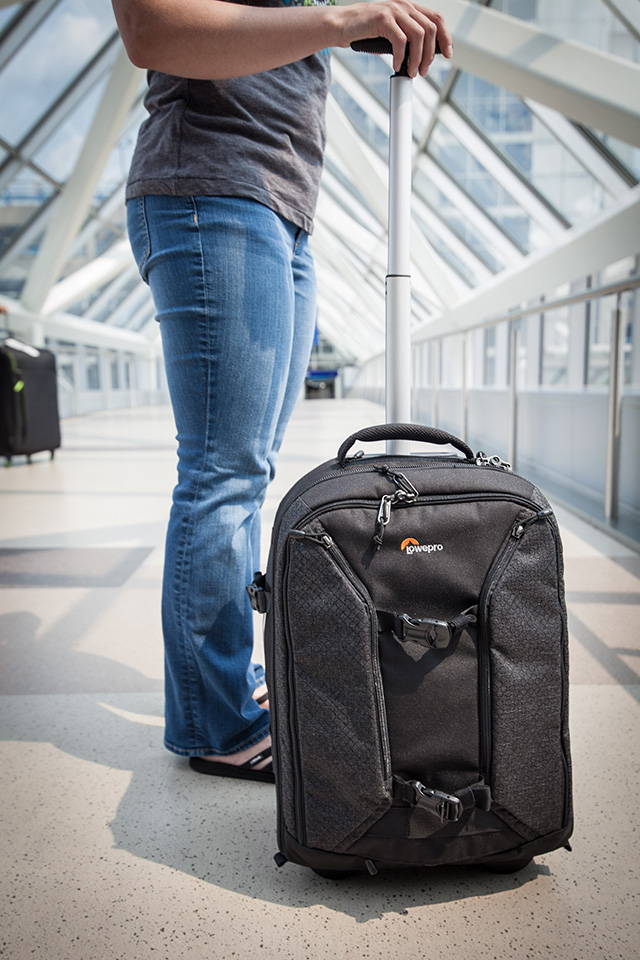 The Pro Runner x450 attempts to be a jack-of-all-trades but in reality it’s just a fantastic, well-featured roller bag that converts to an uncomfortable backpack when it’s too much of a pain to roll or carry in a certain place. I honestly don’t think we will ever see a bag/pack that does both very well, as they are simply two different styles, but this is about as close as it comes.

This bag shouldn’t replace anyone’s normal go-to camera backpacks when you need to hike to locations. This bag is more for someone who spends time taking a small kit around the city, or on short flights to a photo/video job. If you dig roller bags, you’ll like this bag a lot.

We give the Lowepro Pro Runner RL x450 AW II four out of five stars for being a well-built, good-looking, carry-on compatible roller camera bag, with the option to throw it on your back when the road gets a bit rocky.