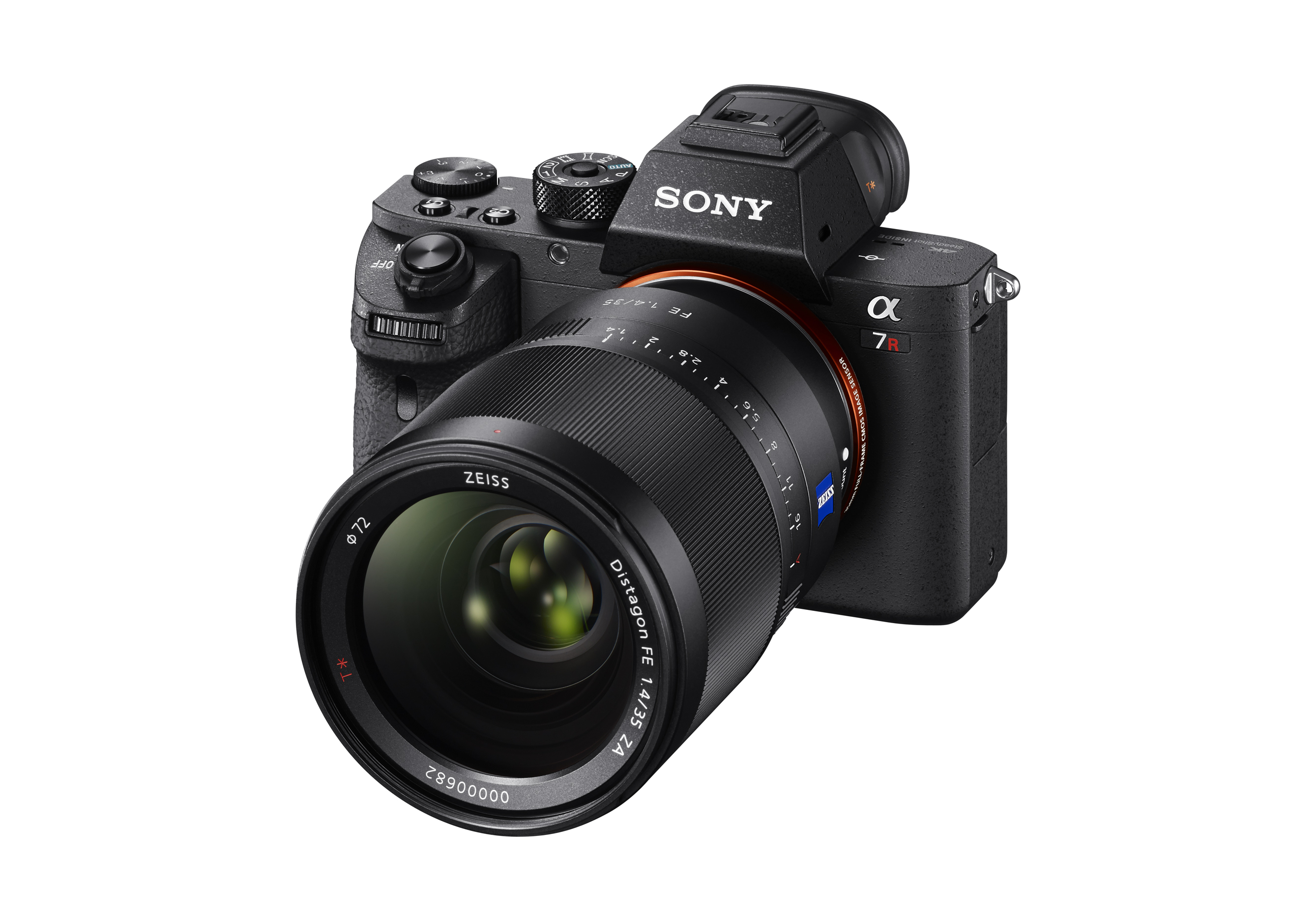 In a move that rather explains the pricing fiasco of the a7R on their website a couple weeks ago (you know, when it was marked incorrectly as $200), Sony has introduced their new flagship full-frame mirrorless camera, the a7R II (model ILCE-7RM2). The new a7R II interchangeable lens camera features the world’s first back-illuminated full-frame Exmor R CMOS sensor, which realizes high resolution (42.4 MP approx. effective megapixels), high sensitivity (expandable up to ISO 102400) and high speed AF response up to 40% faster than the original a7R thanks to 399 focal plane phase detection AF points.

The camera also includes a 5-axis image stabilization system borrowed from the acclaimed a7 II model and can shoot and record 4K video in multiple formats including Super 35mm (without pixel binning) and full-frame format, a world’s first for digital cameras.  Additionally, it has a newly refined XGA OLED Tru-Finder with the world’s highest (0.78x) viewfinder magnification. 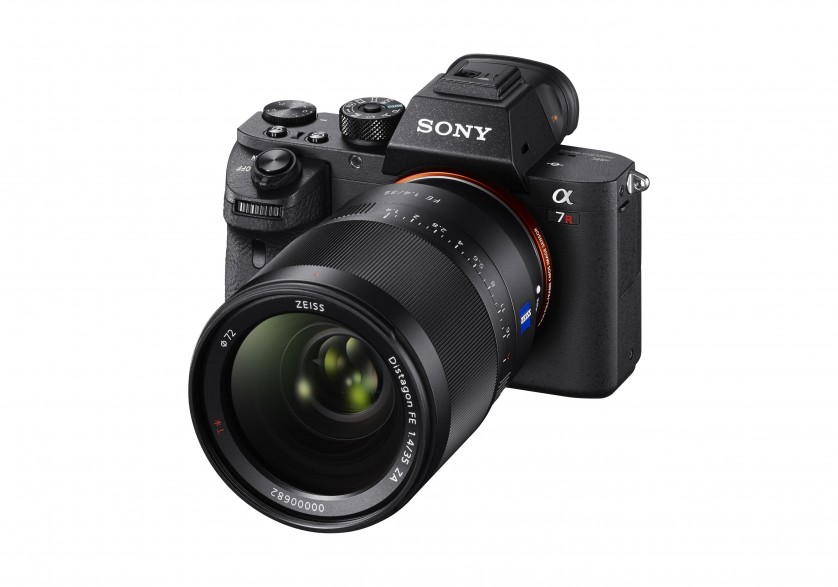 The newly developed 42.4 MP back-illuminated CMOS sensor is the most advanced, versatile and highest resolution full-frame image sensor that Sony has ever created, allowing the a7R II to reach new levels of quality, sensitivity and response speed.  In the past, many photographers have been forced to choose between high-resolution and high-speed or high resolution and high sensitivity when selecting a camera. The new a7R II eliminates that sacrifice thanks to its innovative image sensor.

The 42.4 MP sensor combines gapless on-chip lens design and AR (anti-reflective) coating on the surface of the sensor’s glass seal to dramatically improve light collection efficiency, resulting in high sensitivity with low-noise performance and wide dynamic range.  This allows the camera to shoot at an impressive ISO range of 100 to 25600 that is expandable to ISO 50 to 102400.

Additionally, the sensor’s back-illuminated structure, with an expanded circuit scale and copper wiring design, enables faster transmission speed and ensures content can be captured in high resolution without sacrificing sensitivity.  Data can also be output from the sensor at an approximately 3.5x faster rate compared to the original a7R.

An ideal match for Sony’s extensive collection of FE lenses (35mm full-frame compatible E-mount lenses), the new a7R II features a high-speed BIONZ X image processing engine that allows images and video from the camera to be captured with supreme details and low noise.  There is also no optical low pass filter on the camera, ensuring that scenery and landscapes are captured in the highest possible resolution and clarity. 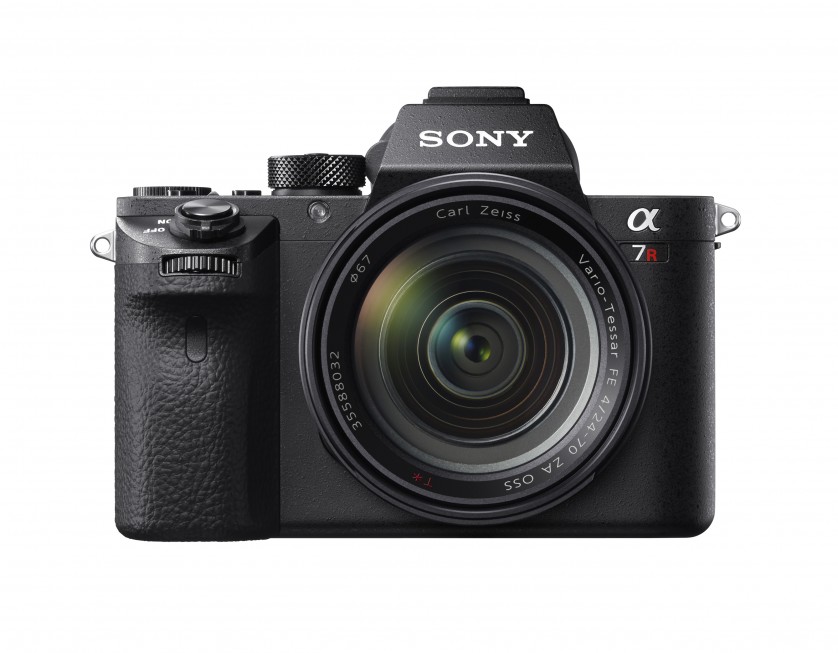 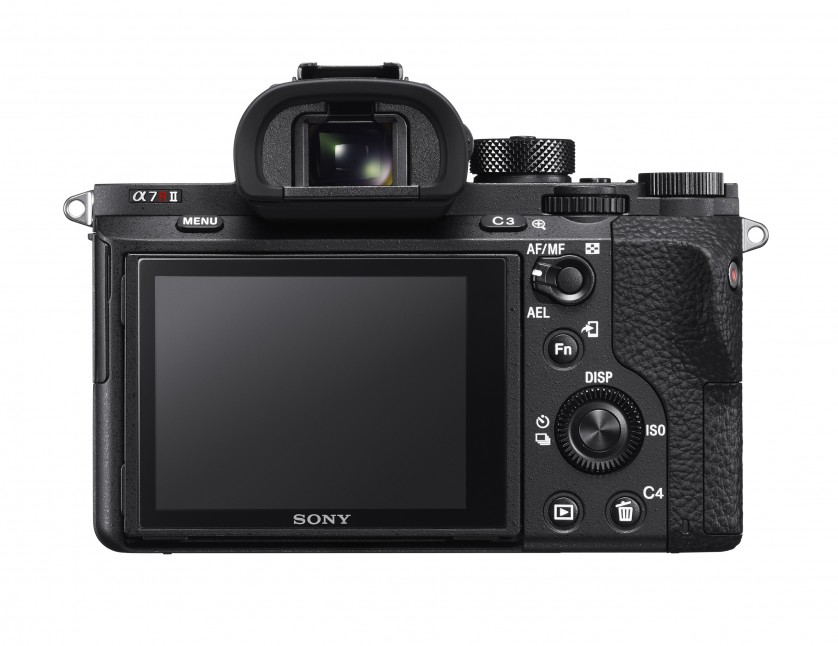 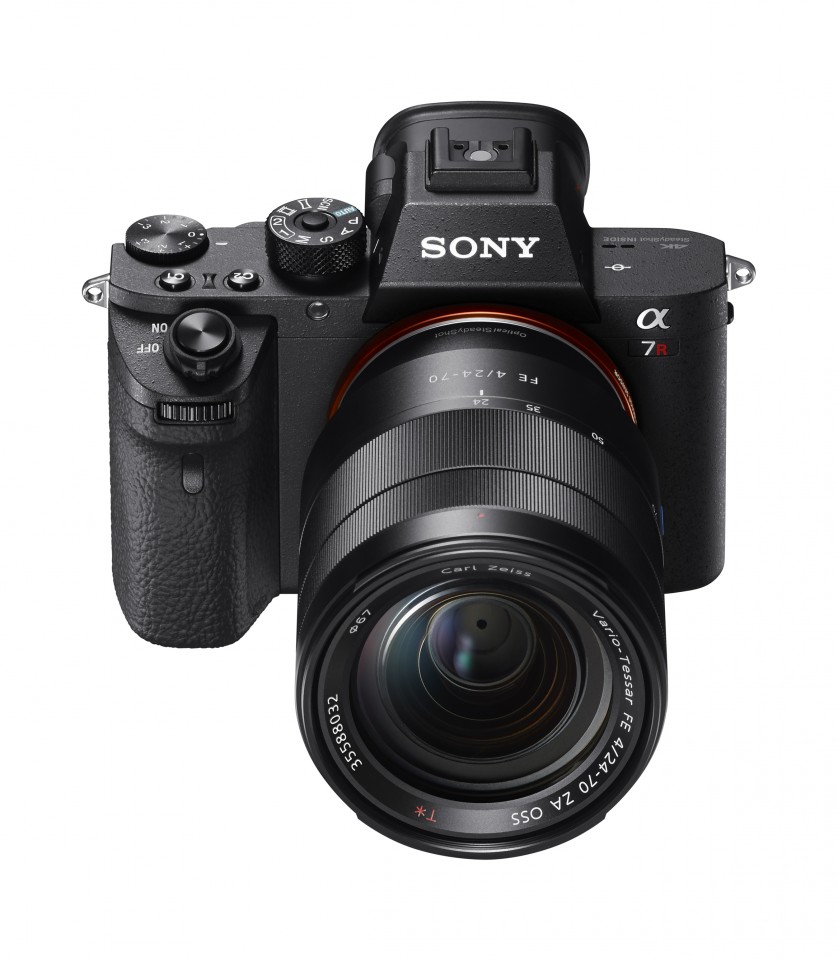 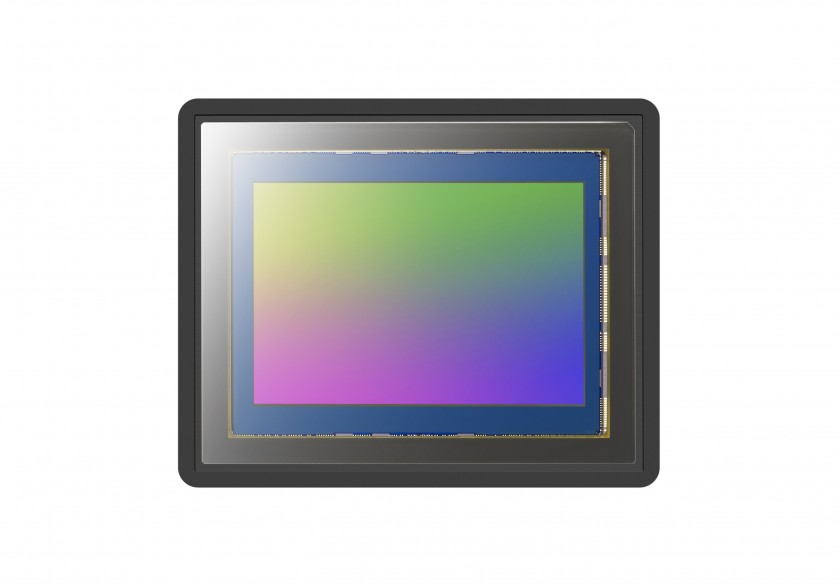 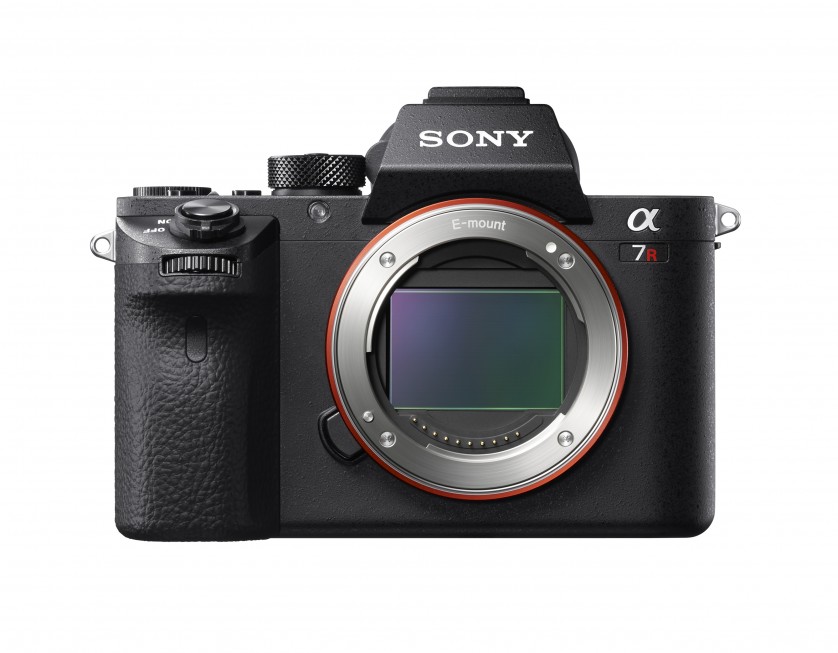 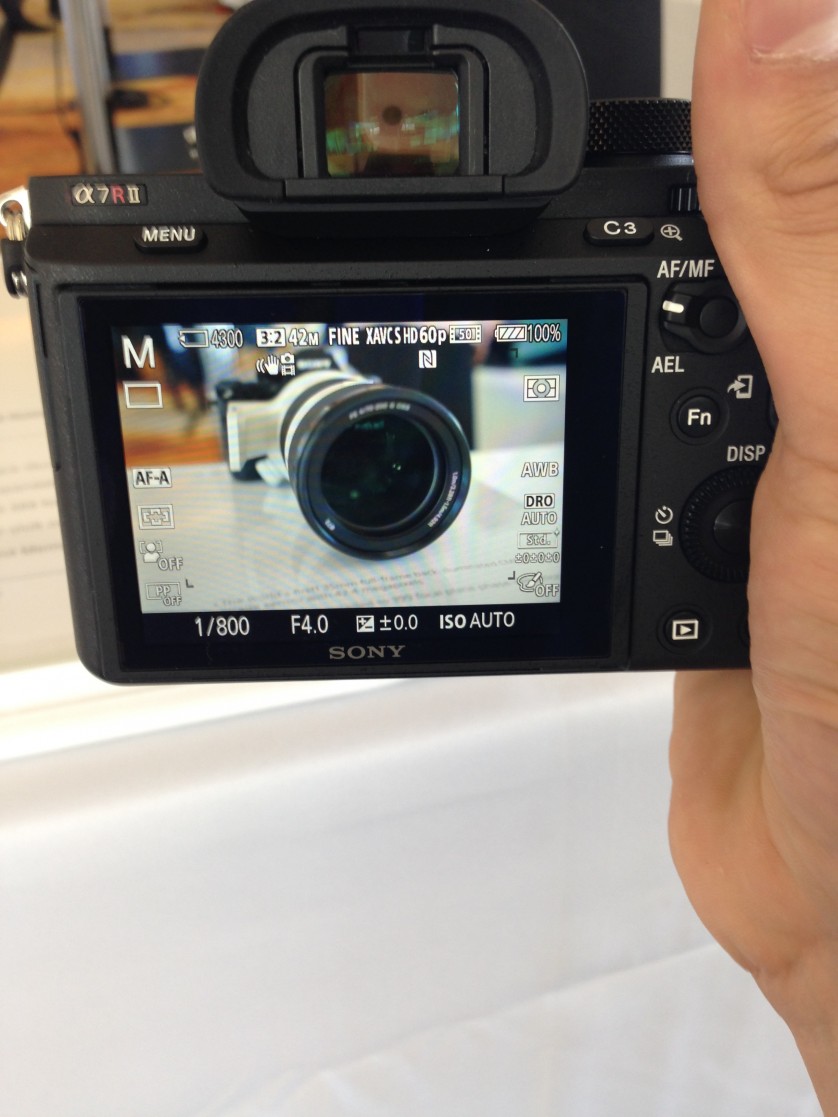 The a7R II has a new highly durable reduced-vibration shutter that realizes 50% less vibration from shutter movements compared to its predecessor, and has a cycle durability of approximately 500,000 shots.  The camera can also be set to Silent Shooting mode in order to shoot images quietly without any sensor vibration or movement.

The new image sensor features 399 focal-plane phase-detection AF points – the world’s widest AF coverage on a full-frame sensor – that work together with 25 contrast AF points to achieve focus response that is about 40% faster than the original model.  The a7R II utilizes an advanced motion-detection algorithm combined with this Fast Hybrid AF system to achieve up to 5fps continuous shooting with AF tracking.

Additionally, the focal plane phase-detection AF system on the a7R II works well with Sony A-mount lenses when they are mounted on the camera using an LA-EA3 or LA-EA1 mount adapter.  This allows users to enjoy the wide AF coverage of 399 focal plane phase-detection AF points, high-speed response and high tracking performance with a wider range of lenses.  This marks the first time that the AF system of a mirrorless camera can achieve high performance with lenses originally designed for DSLRs. 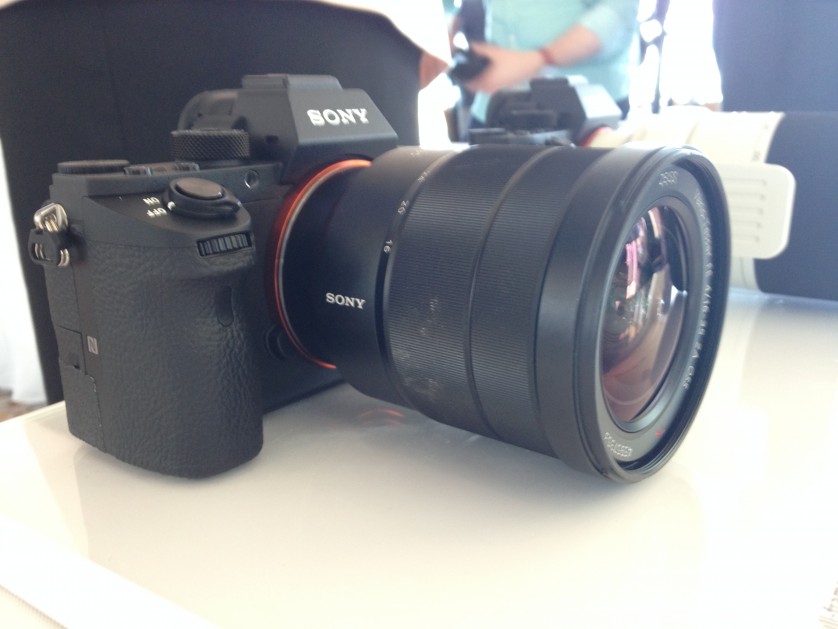 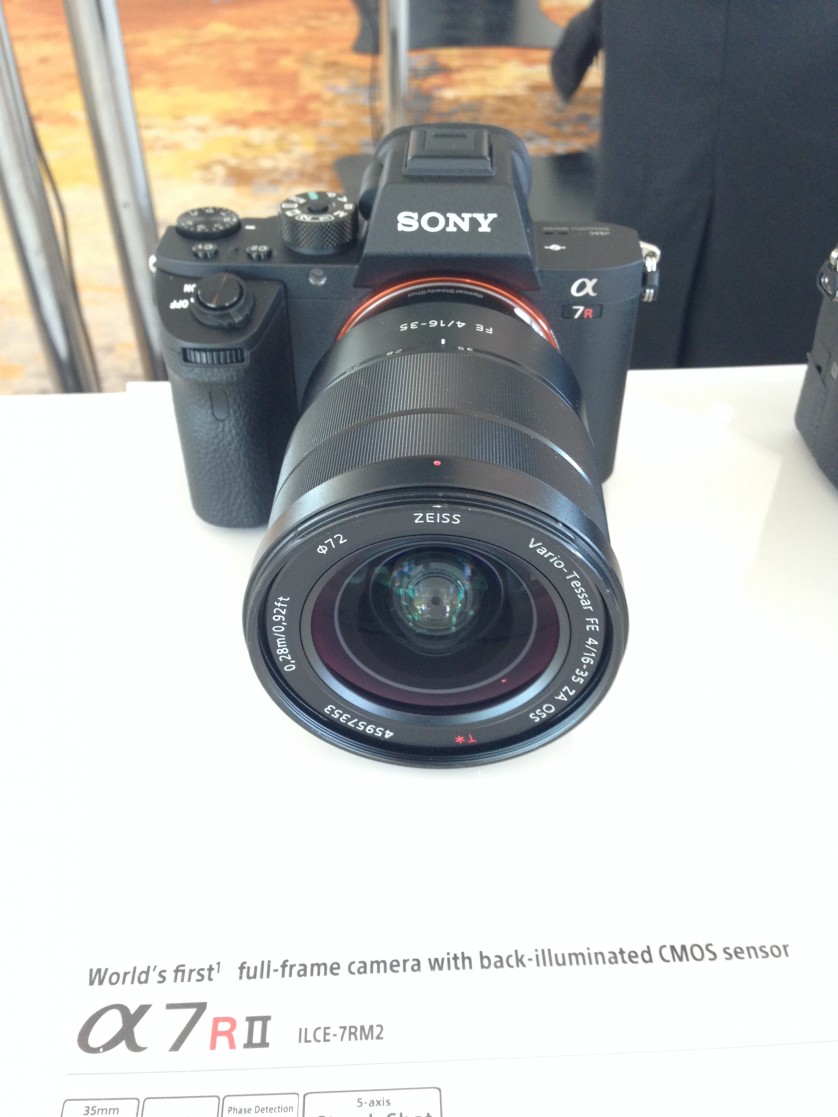 The new flagship a7R II model is equipped with an innovative 5-axis image stabilization system that has been fine-tuned to support its high-resolution shooting capacity.  Similar to the system launched on the acclaimed a7 II model, this advanced form of image stabilization corrects camera shake along five axes during shooting, including angular shake (pitch and yaw) that tends to occur with a telephoto lens, shift shake (X and Y axes) which becomes noticeable as magnification increases, and rotational shake (roll) that often affects video recording.  This camera shake compensation system is equivalent to shooting at a shutter speed approximately 4.5 steps faster. 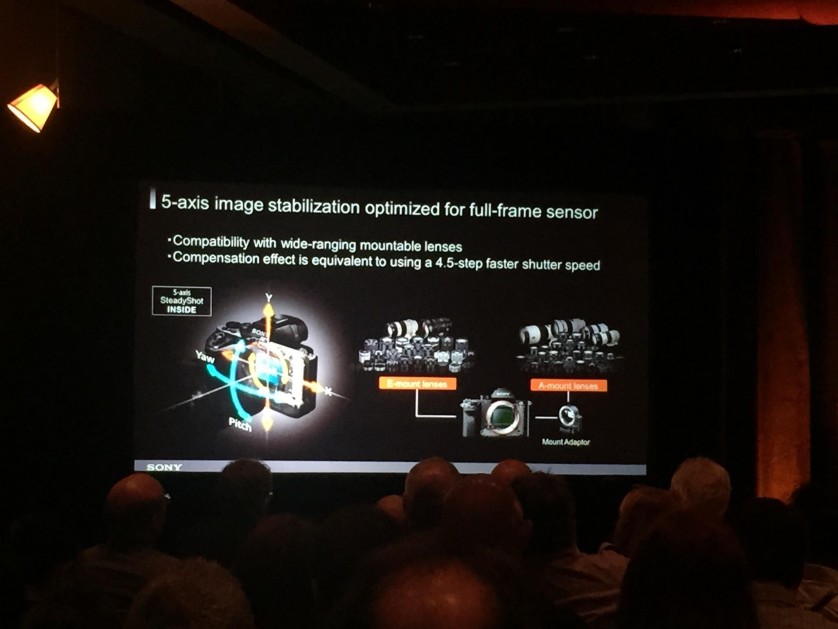 Additionally, the 5-axis stabilization works cooperatively with Sony a lenses with optical SteadyShot™ (OSS) to provide maximum stabilization and clarity, while also performing admirably via a compatible mount adapter with Sony a A-mount lenses6 without on-board stabilization .  Effects of the stabilization can be previewed via live-view on the LCD or OLED viewfinder of the camera. 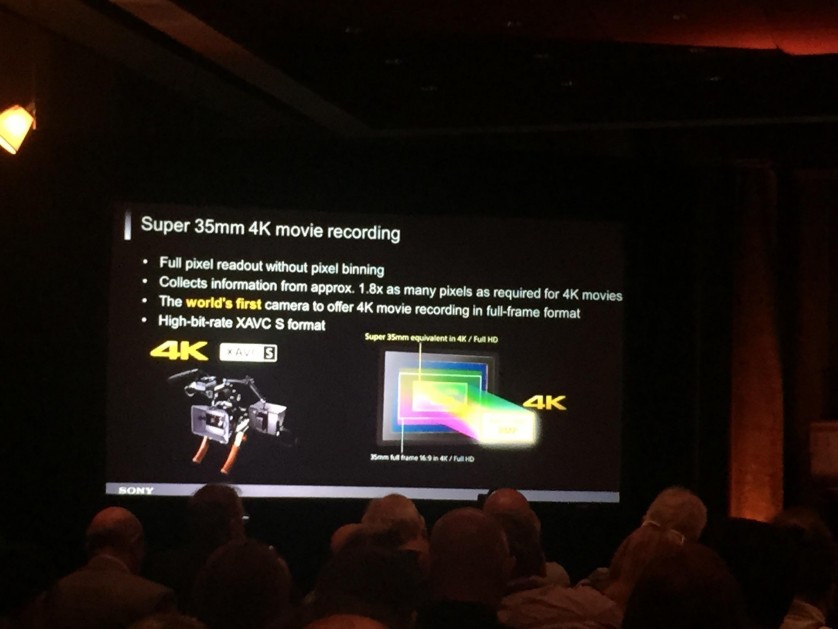 The impressive video credentials of Sony’s new a7R II camera include the ability to record movies in 4K quality (QFHD 3840×2160) in either Super 35mm crop mode or full-frame mode.

In Super 35mm mode, the camera collects a wealth of information from approximately 1.8x as many pixels as 4K by using full pixel readout without pixel binning and oversamples the information to produce 4K movies with minimal moire and ‘jaggies’.

In full-frame mode, the a7R II utilizes the full width of the 35mm sensor for 4K recording, allowing users to utilize the expanded expressive power of the sensor.  It is the world’s first digital camera to offer this in-camera full-frame format 4K recording capacity1.

The camera utilizes the advanced XAVC S codec during video shooting, which records at a high bit rate of 100 Mbps during 4K recording and 50 Mbps during full HD shooting. 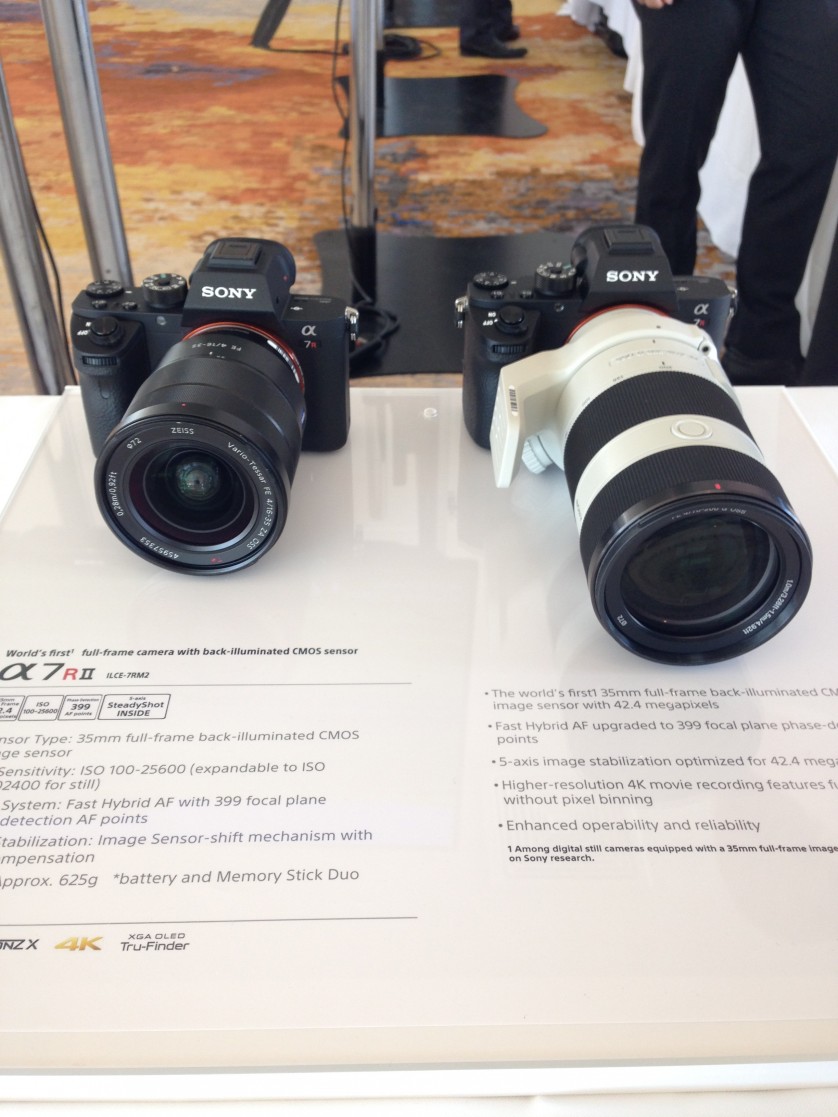 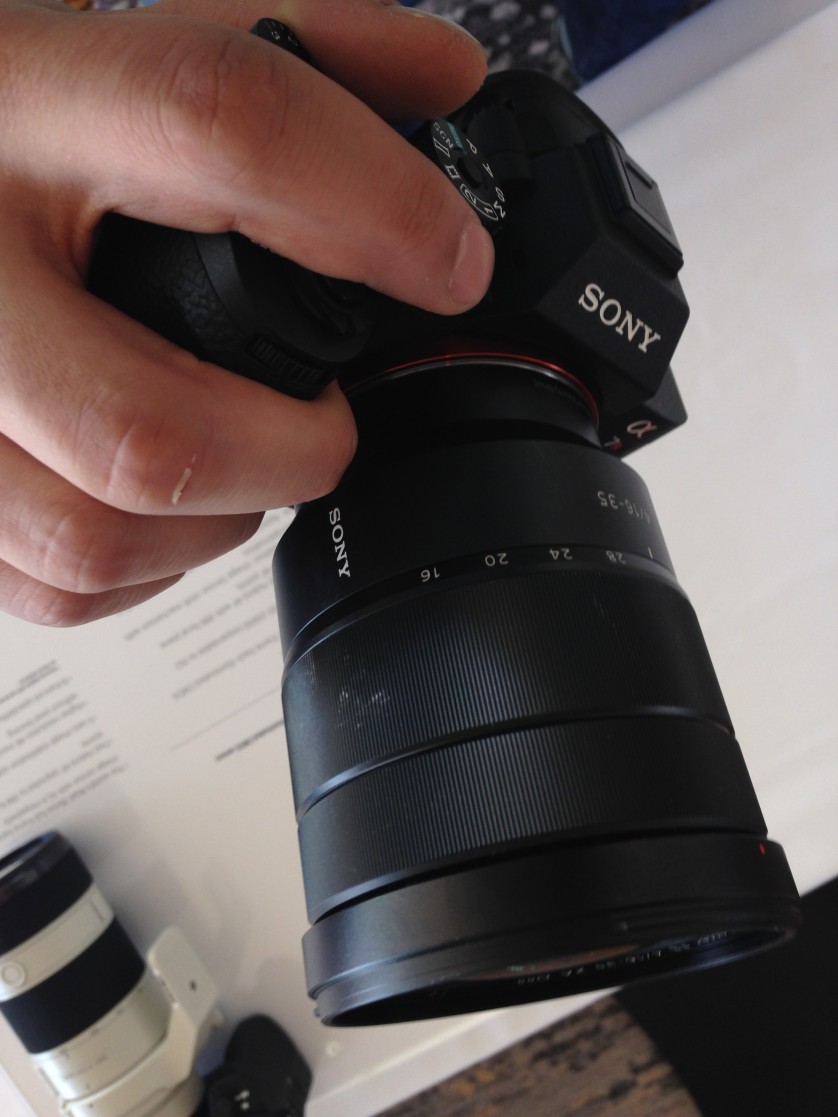 The new full-frame a7R II has an upgraded XGA OLED Tru-Finder with a double-sided aspherical lens that delivers the world’s highest viewfinder magnification of 0.78x for crystal clear image preview and playback across the entire display area.  ZEISS  T* Coating is also utilized to reduce unwanted reflections that interfere with the shooting experience.

The camera has an extremely solid, professional feel in-hand thanks to its light, rigid magnesium alloy design, and has a re-designed grip and shutter button compared to its predecessor.  There is also a new mechanism to conveniently lock the mode dial, and an expanded range of customizable functions and buttons to suit the most demanding photographers.

The new a7R II camera is Wi-Fi and NFC compatible and fully functional with Sony’s PlayMemories Mobile application available for Android and iOS platforms, as well as Sony’s growing range of PlayMemories Camera Apps, which add a range of creative capabilities to the camera.  For example, there is more creativity available now for time-lapse photography thanks to a new “Angle Shift add-on” app allows users to easily add pan, tilt and zoom to time-lapse images without any additional shooting equipment or PC software required.  Learn more at www.sony.net/pmca.

The Sony a7R II full-frame interchangeable lens camera will be available in August for about $3200. The a7R II is compatible with Sony’s growing lineup of a -mount lenses, which now totals 63 different models including 12 native ‘FE’ full frame lenses.  By early 2016, Sony will add an additional 8 new lenses to its FE full frame lineup, bringing the FE total to 20 lenses and the overall a -mount assortment to 70 different models. 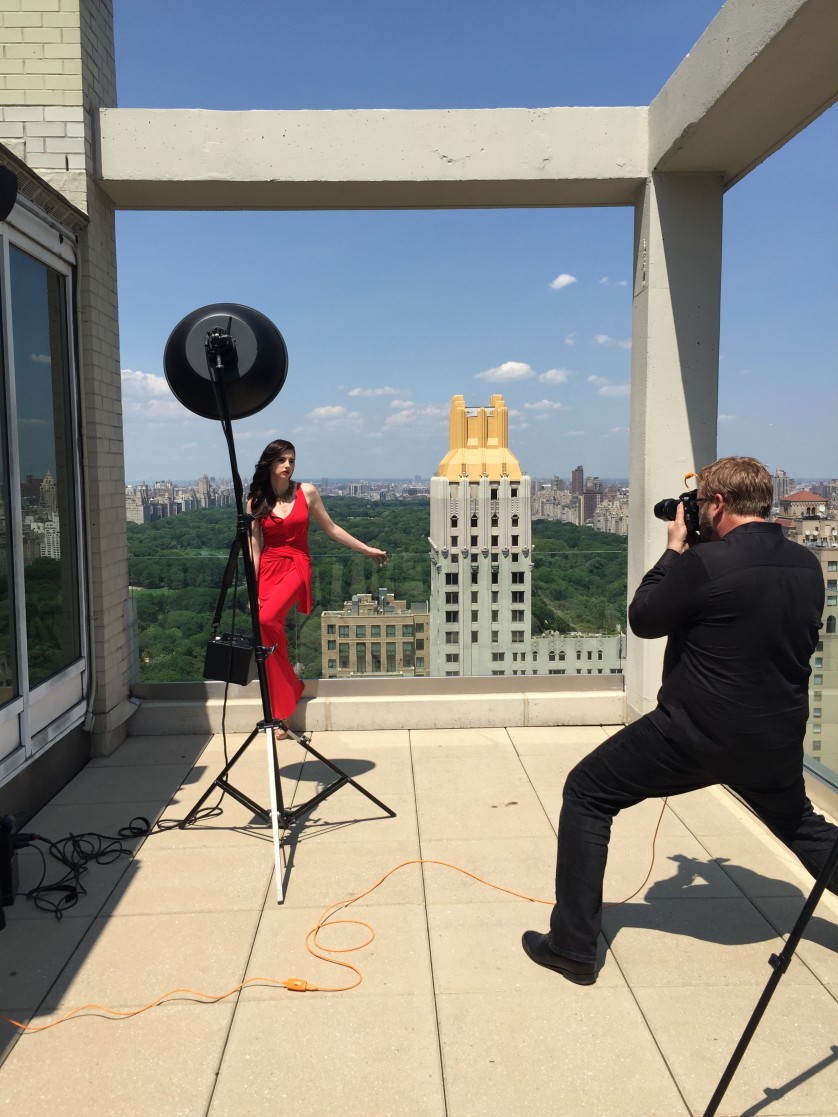 Brian Smith showing off the Sony A7r II in a fashion shoot.