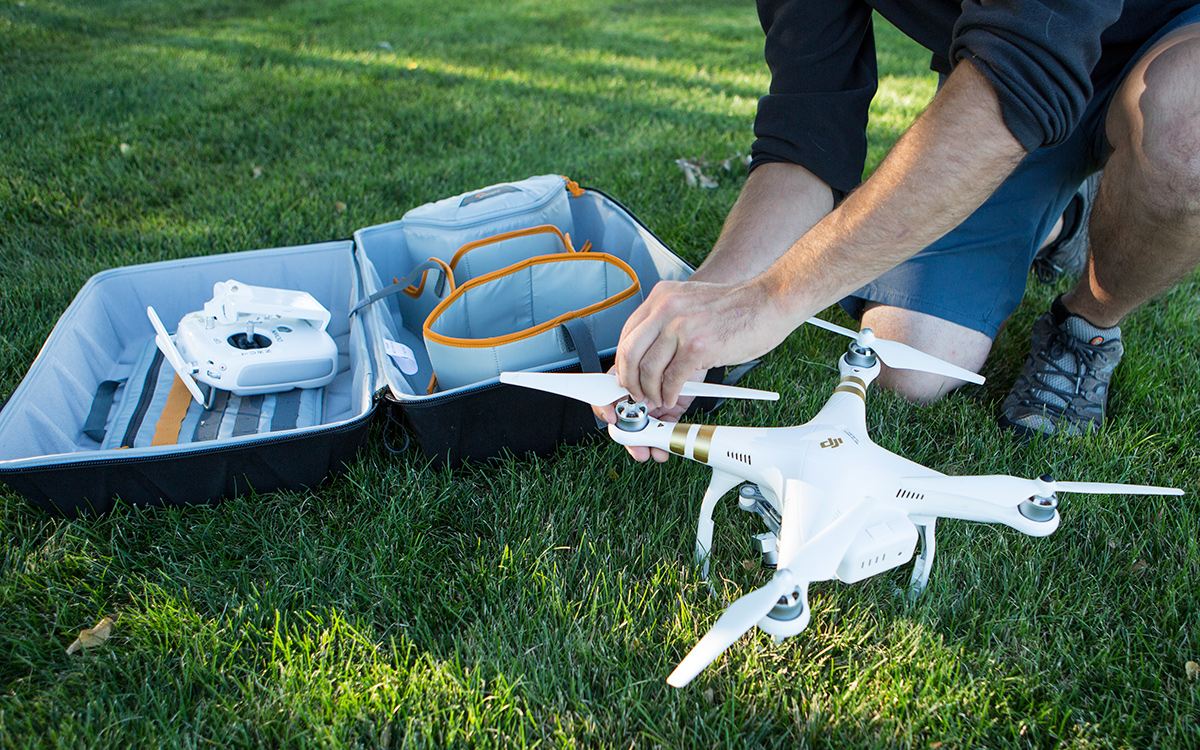 Review: Lowepro’s New DroneGuard Series Is Convenient, But Leaves A Few Things to Be Desired

Lowepro has made some of my favorite backpacks and roller bags, and without question they seem to deliver consistently above average products to pack, protect, carry, and travel with, photography equipment. Their new line of bags for drone systems has been released, and I got to put the DroneGuard CS400 through the wringer to see if it would hold up to the rigors of production.

My company Wilkinson Visual has spent the last week filming aerial videos with drones/UAVs/quadcopters in Southwest Colorado. Our shoots have been as simple as a flyover across a city park, and as complex as hiking 5 miles up to the ridge of a remote 13,000 foot mountain to capture an orbit move around a hiker at sunset. In tow we had the DJI Inspire 1 as our primary unit, but we also took a Phantom 3 Professional with us as a backup. Our shoots were the perfect opportunity to try out the DroneGaurd CS400. 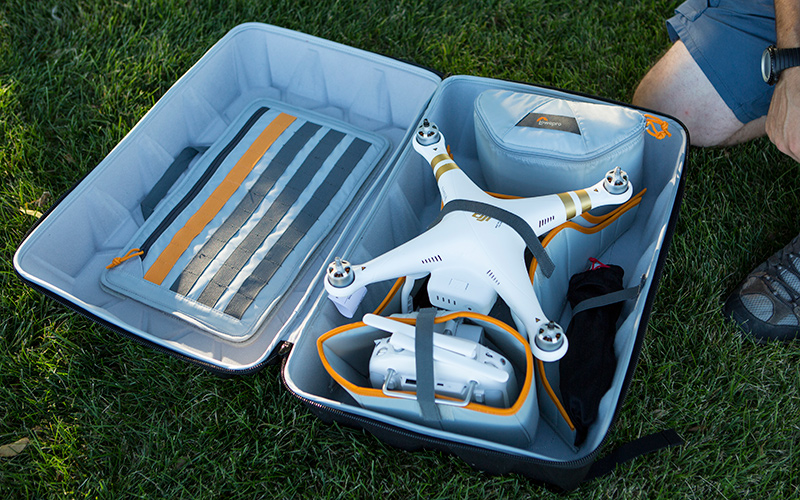 Using the DroneGuard during Air Travel

Our trip started in Michigan, where my camera operator Jakob Skogheim and I needed to catch a flight to Denver. The DroneGaurd CS400 arrived just in time so I could use it to pack my Phantom (which is the largest drone it can pack; the Inspire will definitely not fit). The size of the CS400 is about 2 inches larger than the carry-on size limit for American Airlines, so I decided that I would need to check it.

Checking the DroneGuard meant it would be thrown around a bit, so I needed to pack carefully with this in mind. The Phantom 3 Pro fits, but not with the blades on. Not a big deal to me. What did bother me was the lack of straps; this pack only included a single strap to run over the drone to secure it in place. 3-4 would have been preferred to make sure it didn’t shift around during transport. 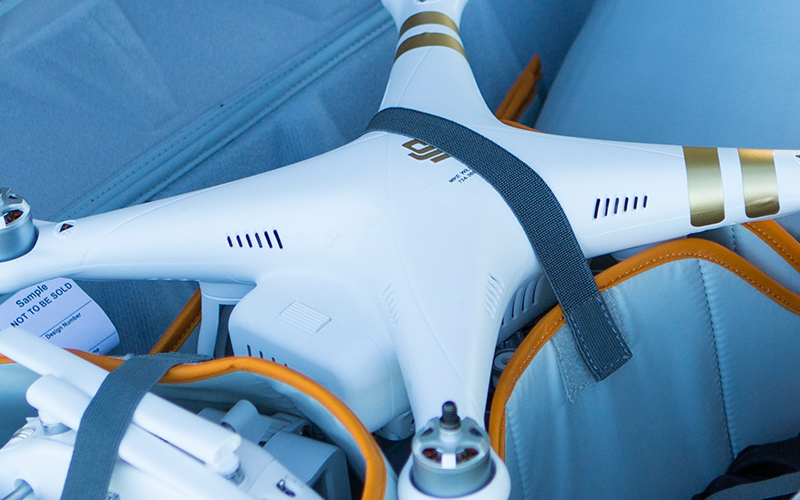 The interior consists of three thinly padded dividers, which you can move and adjust with the velcro they have on the bottom. The entire inside of the case is made of a soft-velcro material, so you could likely use existing dividers if you wanted to. This was simple enough to position the Phantom, and make other space open for additional accessories. I ended up putting my propellers in one of these spaces, instead of sliding them into the straps on the underside of the pack, as shown in the DroneGuard’s marketing images. 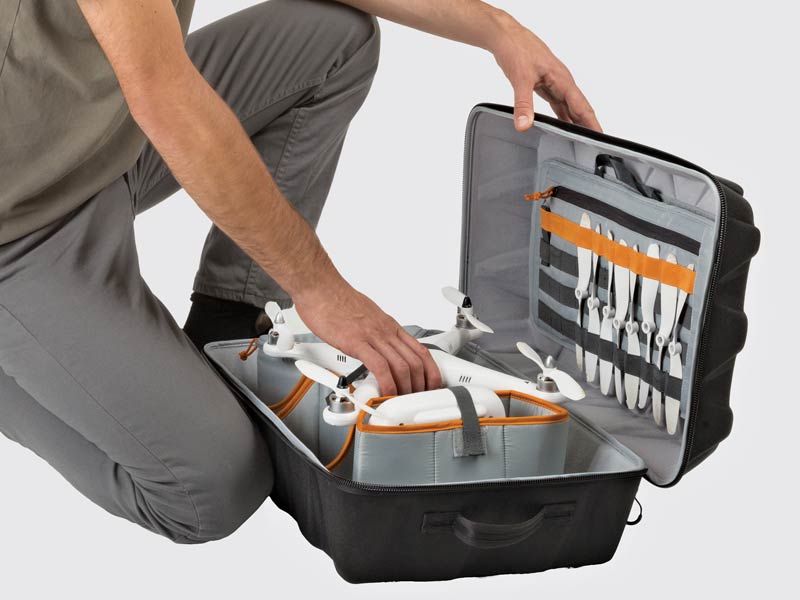 When I attempted to pack my props like in the image above, they would hit and rub on the top of the Phantom 3 Pro, scratching and scuffing it in the process. That was no bueno for me, so I’m guessing you can only do this if you have a smaller drone.

I placed my props in a bag but had to use another velcro strap to secure them, otherwise they would just be moving about. Turns out this wasn’t enough, as they has come loose during my flight.

There are two pouches that come with the DroneGuard CS400: one is open (for your controller) and the other has a zippered top (for spare batteries, accessories, and shooters of whiskey.) The controller pouch was simple and effective enough to protect the controller and hold it in place, and the accessory bag had a small amount of padding to keep items safe. What the accessory bag was missing though was a bit of velcro on the bottom to hold it in place– without this it just slides about in the pack! This is a simple fix, and I’m surprised it was omitted from the final design. 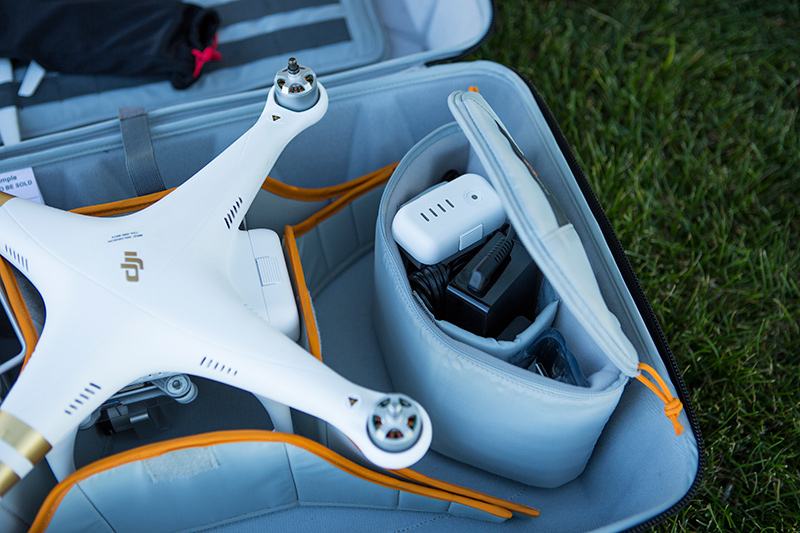 A thin, padded pouch on the inside of the top shell was a perfect place to put an iPad, which is what we used to control our Inspire and Phantom.

I made sure to add some other items into the pack to simply take up empty space so that contents would shift too much. The pack arrived in Denver just fine, but I did place it inside of a large duffel bag just to give it another layer of protection. Speaking of protection… 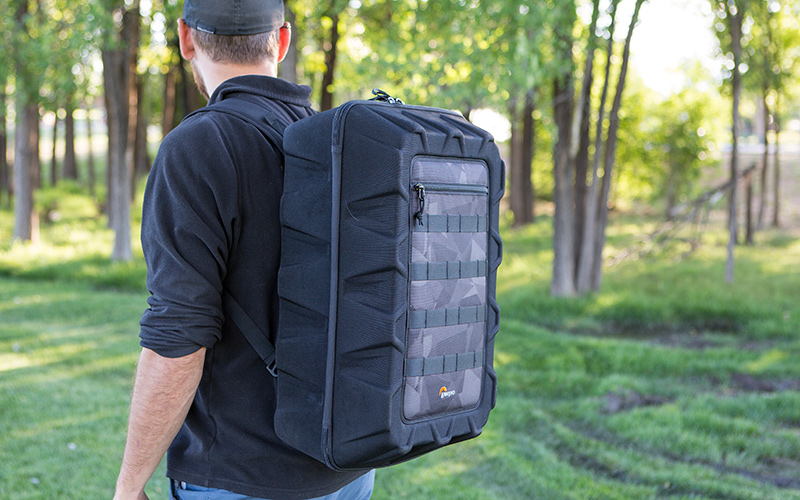 The case is made of a lightweight shell that holds its form, but I wouldn’t sit anything terribly heavy on it. It is NOT a hard case, so shouldn’t be treated as one. It does provide ample protection for general transport from studio to car to shoot in the field, but it wouldn’t stand up to well again a swift kick or fall from up high.

The strap loops it has on the back are a nice feature- we used them to clip walkie talkies and water bottles. The shoulder straps are removable, and you can convert it from carrying as a backpack to carrying it as a shoulder bag. For a quick walk around a park, the bag was perfectly comfortable. When I returned from hiking about 10 miles with it however, my shoulders were painfully sore. It’s simply not built for that kind of a distance, which is fine, but something you should be aware when considering it for your own needs.

On a side note, I did have my friend Dawn, a female who is about 5’8″ try this pack on, and she thought the fit was rather annoying. The hard edge of the shell was hitting her right on the spine on her lower back when she walked with it on. 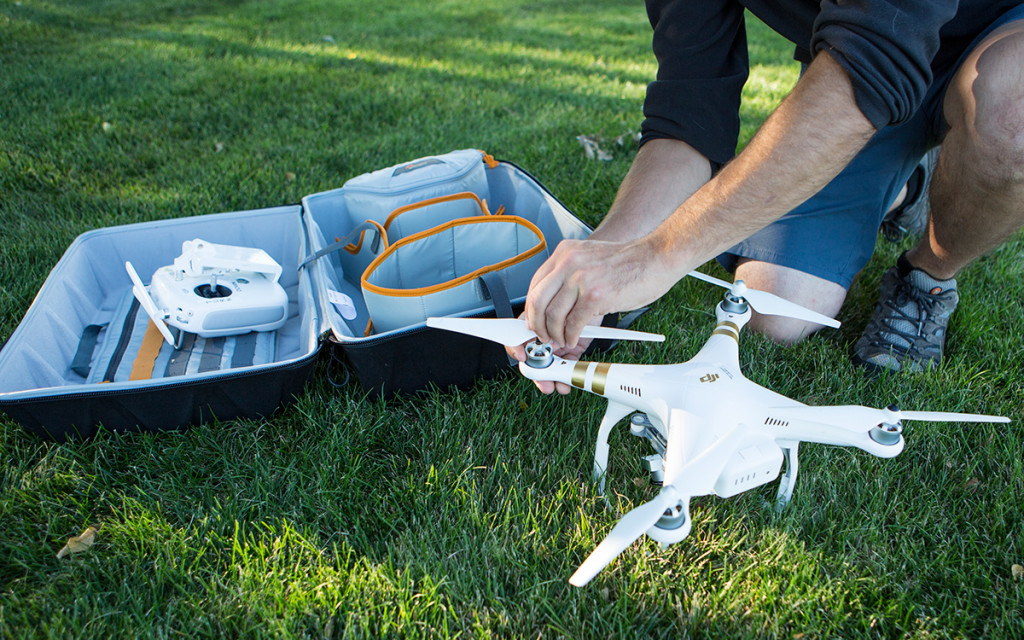 • Lightweight
• Entire interior can accept velcro dividers and straps in many configurations
• Removable shoulder straps
• Has a place to put your iPad, batteries, and a few other accessories
• Relatively inexpensive

• Not enough straps to secure your drone in place
• The zippered bag slides around
• The Phantom 3 is so big that you can’t pack it with the props on, or pack the props on the underside of the interior
• Is not built to be worn on long hikes
• Too much open space inside means items will shift about

For over 20 different shots in different locations, this bag went from our base, to the back of a car, and onto my shoulders. We weren’t gentle with it, but we certainly didn’t throw it about. It’s been extremely convenient to have everything the Phantom needs in a single pack. Saying that, I think it’s missing a few features that are keeping it from being more useful, protective, and versatile.

We give the Lowepro DroneGuard CS400 three out of five stars for being a simple, lightweight solution to transporting a small drone, but missing a few small features that keep it from being a must have addition to your drone kit.