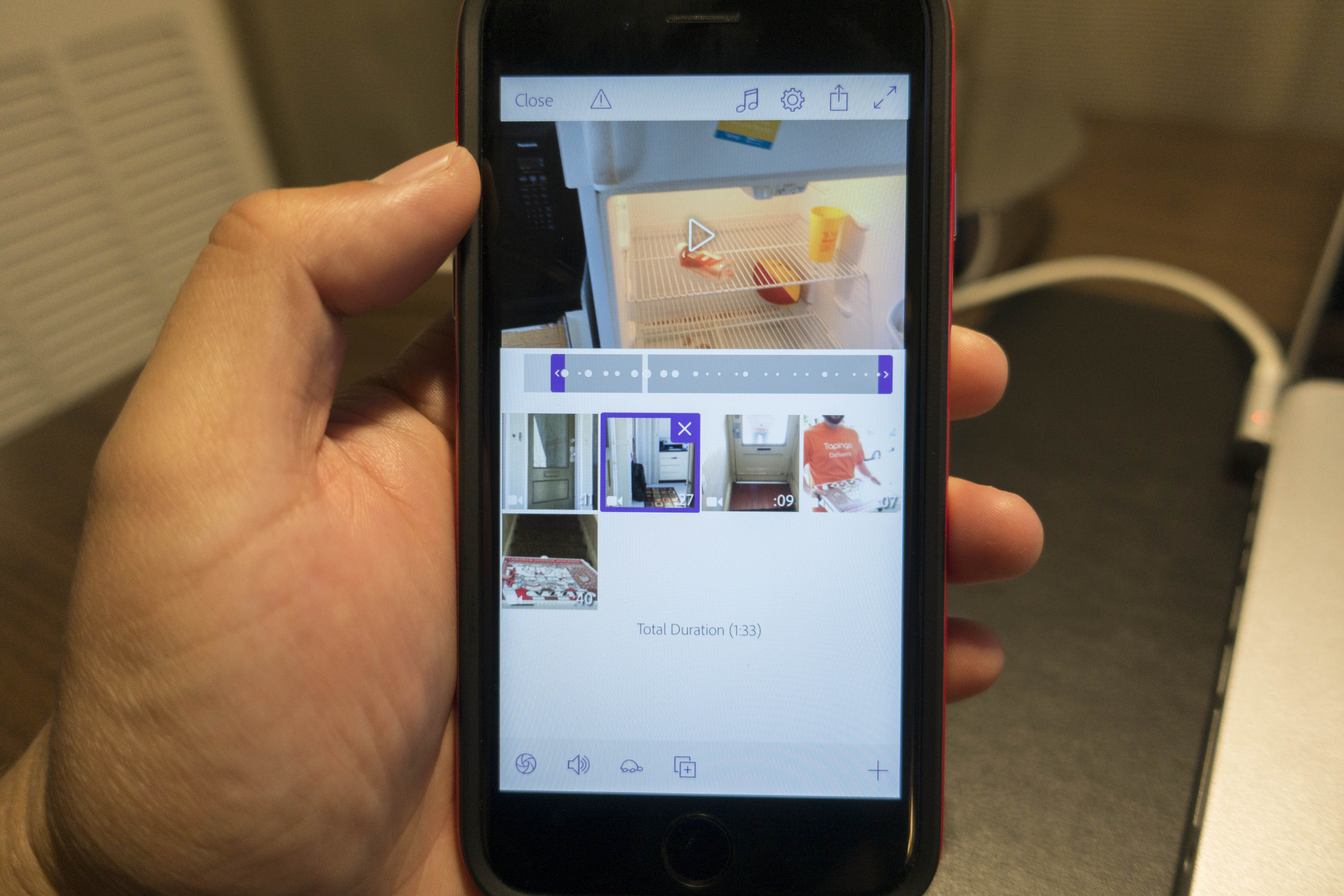 Adobe has the chops, the experience and the talented developers to make some truly amazing software, which is why I’m regularly baffled at how little I can do on the mobile apps they tout. Lightroom is marginally useful (good for culling), I loved Color (which is now part of Capture) and Sketch and Mix have their place, but I’m especially left shaking my head at Adobe’s attempt at bringing video editing to the mobile platform. When I first tested Premiere Clip last year, I dropped it immediately due to a baffling lack of features and a completely outdated linear timeline. I took a look at a pre-release version of Clip 2.0, officially released today, and am still at a loss and find myself asking: who is this app for?

First, let me go over the things Adobe has added to Clip in version 2.0:

Simply choose a soundtrack and select the pace — Clip artfully sets your images to the beat of the music. Your automatic masterpiece is immediately shareable, or you can move into the Freeform editor to finesse it further.

A new sync to music feature lets you cut to music like a pro. Trim your clips to soundtrack markers that are placed precisely on the beats.

Add visual interest to static images. Turning the option ON will apply a slow, subtle zoom.

Send photo collections from Lightroom on Mobile to Premiere Clip with just a tap of your finger.

Your image library now displays as a thumbnail grid, making it easier to browse, re-arrange, and select the shots you want.

Adobe also added the ability to select where in a particular music track you want to start, rather than only letting you go from the beginning (how this wasn’t in V1 is shocking to me). You can also do a two-finger drag to do slide editing.

The updates are good, don’t get me wrong. They are all excellent additions. The sync to music is actually the coolest feature they’ve added, making it easier to cut your clips to where there are significant beats in a particular piece of music. You can see those points noted by larger dots among smaller dots along the timeline. Those marks are even transferred over to Premiere if you choose to continue editing in the full application. That, is cool. 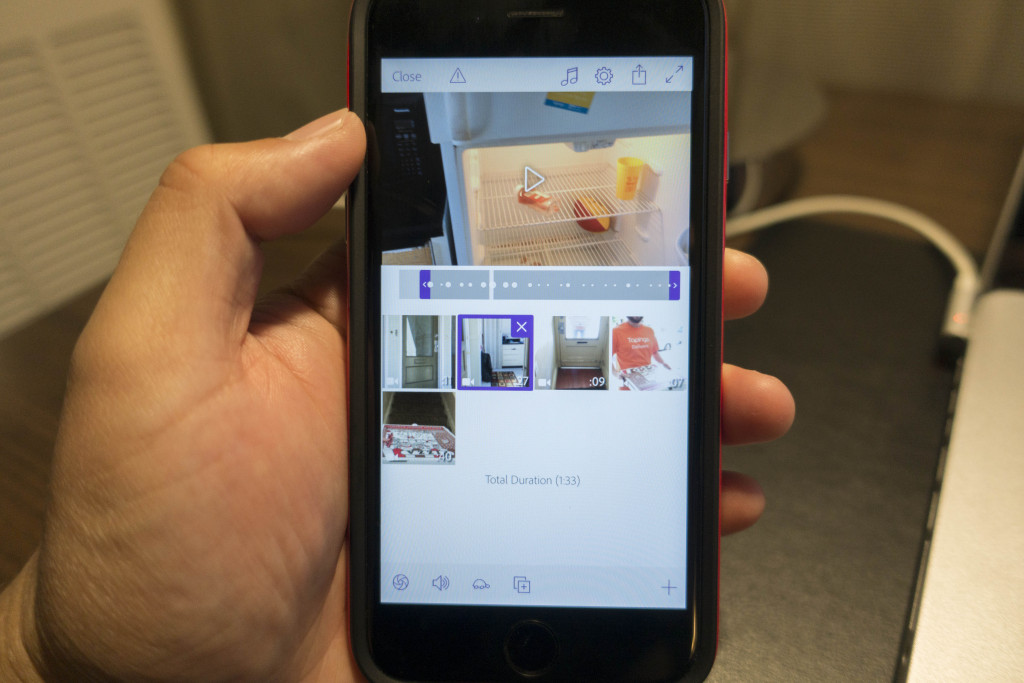 The video creation from Lightroom libraries competes directly with what Animoto offers, so that’s kind of a warning shot off the bow of their entire business model. Pretty nice, and should be of interest to wedding photographers.

The “automatic video creation” update is interesting, and I put it to the test to see how it would treat scenes I shot last week. The idea is that you dump in your footage and the application cuts you a short finished film to music that it either provides (it pre-selects a random one it has access to), or you can select your own after the fact.

It didn’t really do a great job, but that should not be particularly surprising.

I would have been very, very impressed if it managed to edit me a video that actually captured the parts of each clip that I, the filmmaker, thought were important. It didn’t. It got a couple, but the vast majority of the clips came out a hackneyed, jump cut riddled mess.

This is where my confusion with the app starts, and my question of “who is this app for” starts to rear its head. Honestly, no self-respecting editor would ever select “automatic” in any situation. We like options and nuance, and we often need very distinct options to get the final story across just right. Editing is everything. It can make a bad set of video footage into a good film if done well, and great cinematography into a garbled mess if done poorly.

Premiere Clip still works on a single, linear timeline layout. If you have ever edited video on Premiere Pro, Final Cut or Avid, you know that non-linear editing is an absolute must these days. Linear editing like what we see in Clip harkens back to the days of film, where editors were physically cutting lengths of film and splicing them together to make a final movie. Going from non-linear back to linear feels unbelievably crippling, and on a small touch screen (even the iPad), incredibly challenging to manage. 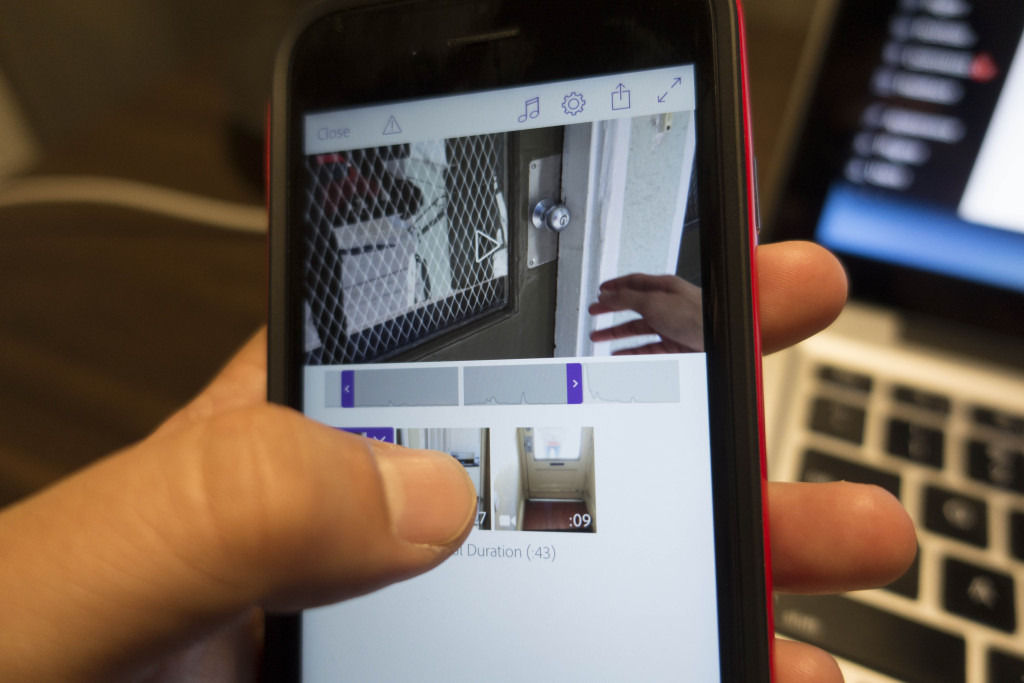 To move clips, tap and hold a particular clip and you can move it around the surrounding snippets of footage. 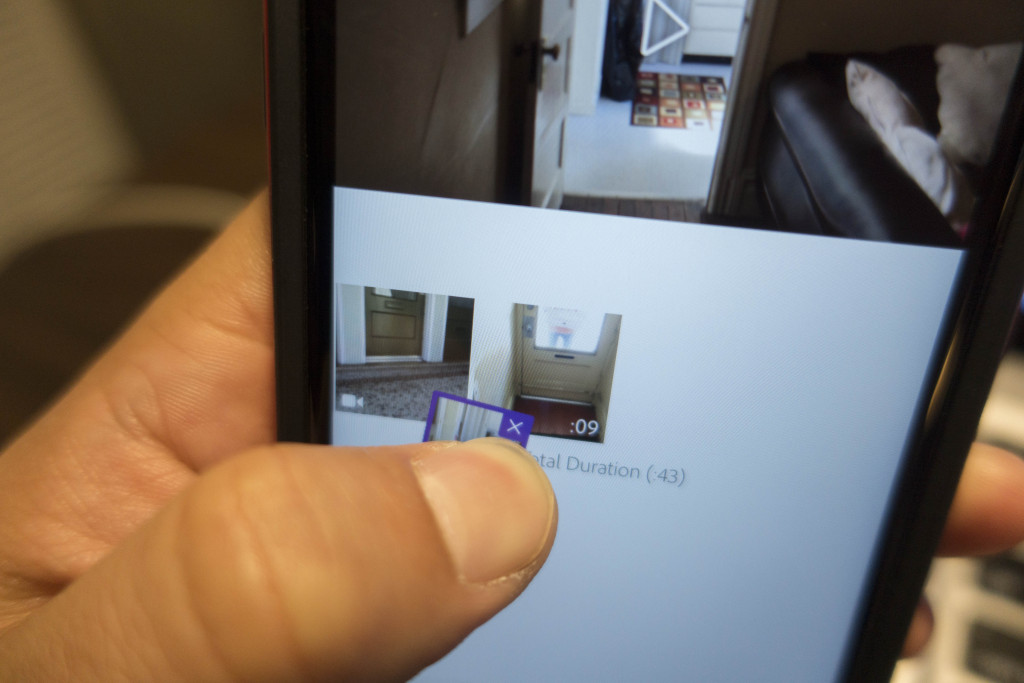 If you don’t have the audio cues from “sync to music” active, editing to music is not fun. This is where I’m glad they added a feature, which does make the challenge of working in a linear timeline a bit easier to bear.

You do get some decent editing options in Clip, but they feel very underpowered compared to what we now have in the Lumetri Color Panel in the full Premiere Pro. 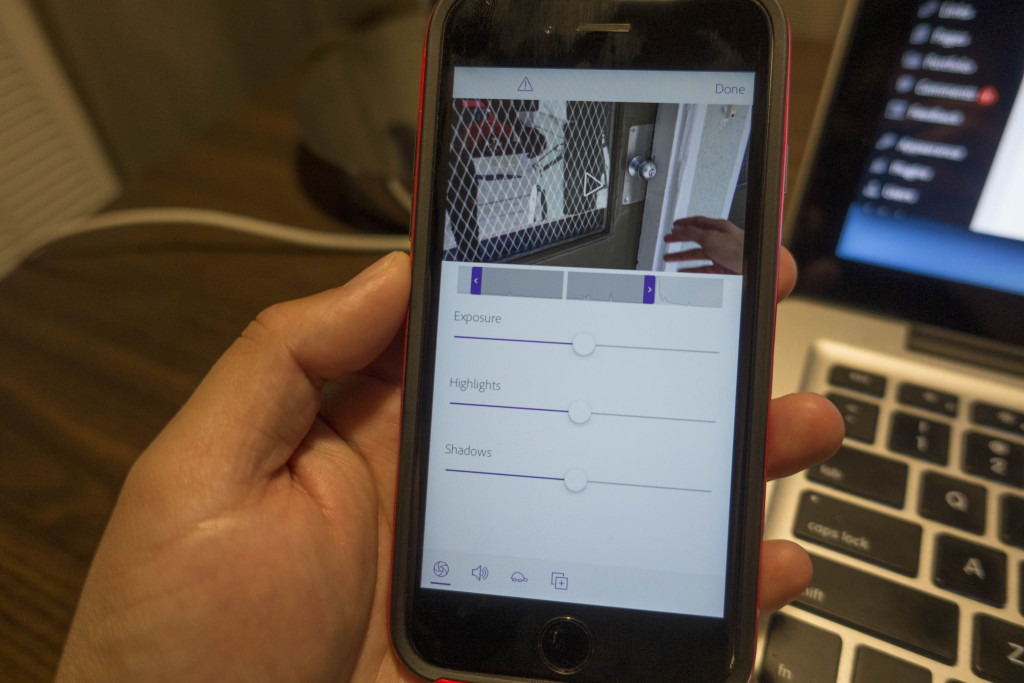 Audio also has some minor things that make it pretty easy to use, but the options are very rudimentary. 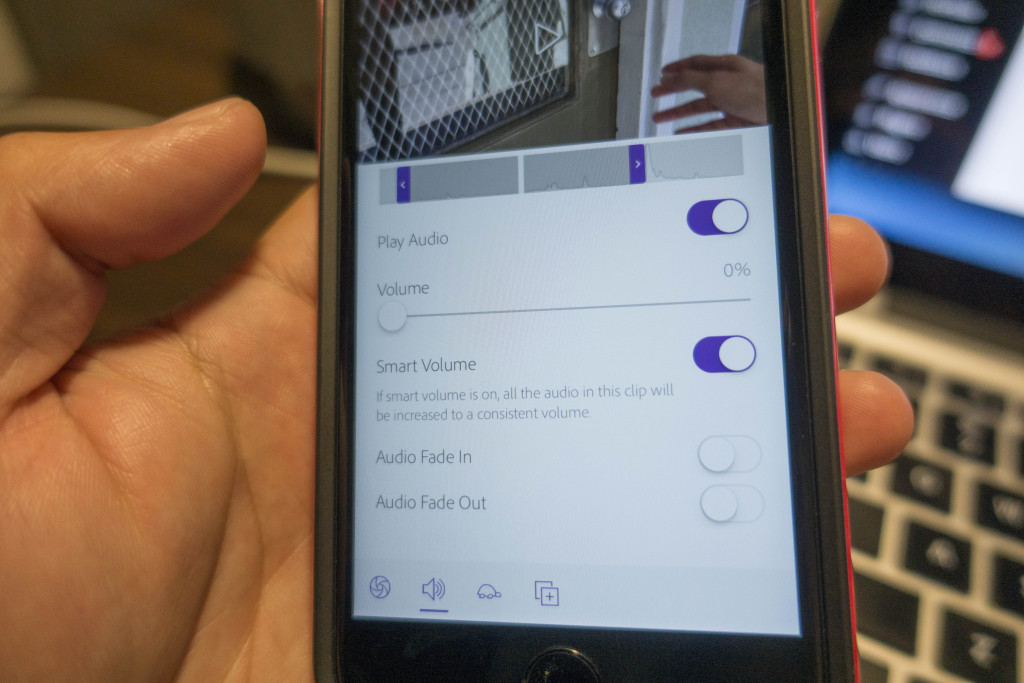 Hopefully you can see what you can do in Clip, and therefore what you can’t do in Clip. Imagine, if you will, attempting to mix b-roll and interview footage along with music. Imagine not being able to edit the video larger by turing your phone sideways (you can’t, you always have to edit in portrait layout. Fine, move to iPad. Now it’s a larger version, with the same problems). Try and imagine cutting all that footage, and perhaps a second camera. Maybe you shot in 4K but you want to export in 1080, so you need the timeline to understand what that means, how you want to frame the zoomed in versions of shots, etc etc. For nearly all of that, you can’t.

So here I am again asking: who is this for? Based on last year when it was talked up at MAX by a professional filmmaker as a great pocket option, or when you look at Adobe’s page of “videos made with Clip,” you would think it would be for professionals who wanted to get a bit done on the road and not feel always tied to a computer.

Then you would look at the “automatic editing,” incredibly dumbed down options and “now easier than ever” language, and you begin to think this is for “mom and dad” editing videos of their kids.

So here I am, again using an app that just feels ridiculously underpowered, with features my mom might like, advertised to me as though it would be a new addition to my professional workflow. It’s confusing, and quite frankly maddening.

I can’t imagine really using anything I put together on Clip, even though it does sync with my Libraries and lets me edit on my main computer when I “get back to the office.” The thing is, I would likely end up completely trashing everything I did on my phone in lieu of what I want to do once I get some actual functionality.

I really don’t like Premiere Clip. I’ve seen what mobile video editing can be, and it makes Clip look laughable. Seriously, check Pinnacle out. It’s spectacular. If you’re going to edit on mobile, Pinnacle makes it so that experience is akin to the desktop experience and that’s exactly what I want. If Adobe advertised this as a cute, easy-to-use app for mom and dad, this review would be completely different. But they don’t, they advertise it as a pocket companion for the pro video editor… and it’s absolutely not that. One year later, it’s still a profound disappointment that makes my life harder, not easier.

Yes, this is a scathing review from the perspective of a professional commercial filmmaker. You will see better reviews from the likes of CNET, PCMag or even the App Store, and you don’t have to agree with my opinions of the software. The reason I feel the way I do about this app is because I expect more, much more, out of Adobe when they advertise this to creative professionals. There is absolutely no way that any real video editor would use this app unless they were paid to. Give me an app that actually improves my workflow, helps my process and allows me to work, really work, on the go, and we’ll talk. For now, I’m deleting Premiere Clip. It’s clearly not for me. Who is it for? I still don’t know.

Review based on testing on iPhone 6s and iPad.