I will be the first to admit that I was not at all sold on the Apple Watch when it was first announced. I honestly did not see the point, was quick to criticize and even went so far as to say the $10,000 version was something I could never get behind (I still retain that particular opinion). But all this said, after a month with the standard, run of the mill Apple Watch strapped to my wrist, I have to admit… I can’t take this thing off.

I think the reason I believed the Apple Watch was not going to be for me is because I thought it was supposed to do more than it actually ends up doing. Basically, just because it can do something doesn’t mean it was intended to, and staying within the boundaries of its intentions is important to the whole experience. You should not sit there and fiddle with it. You shouldn’t play games on it. Some people have even gone so far as to tell me that trying to navigate my calendar on it is using it incorrectly (but I still like to do that; sue me). The Watch instead is 1) a watch and 2) a quick way to know if whatever is happening on your phone is worth more than a glance.

And the ability to know that is a hell of a lot more useful than I ever thought it would be.

I’m the kind of person who enjoys being connected and prompt. I like responding to emails, texts and calls when I get them so that nothing gets forgotten. If you try and get ahold of me and I don’t immediately respond, it’s because I’m legitimately busy, not just that I don’t feel like responding. This is the kind of expectation I set with my friends, and I like it. I just don’t like seeing notifications sitting there on my lock screen. I have to clear them. Even if they end up not being important, I feel like I have to deal with them. But because I like to stay connected and keep my lock screen free, that means I’m often pulling out my phone to check what that latest message is about. Often, it’s not incredibly pressing. But the action of pulling out my phone, looking at it, and putting it back often will interrupt conversations and break up the flow of a social activity.

Instead, the Watch lightly taps my wrist when I have something come in, and a two second glance at my wrist can tell me if something needs my immediate attention, or if it can wait. Coincidently, while typing this, my watch buzzed and told me I received an email. Instead of interrupting my groove to look at my phone and clear it from there, I was able to quickly see it was not important and keep writing… without even taking my hands off my keyboard.

Yesterday while having lunch with some friends, my buddy Dave Geffin took everyone’s phones and put them in a stack on the table so that we would not be tempted to look at them and instead focus on conversations (a common technique these days). Some at the table lamented it, and looked longingly at their phones occasionally, or caught themselves going for their pocket sporadically through the lunch. There was a time that this was also who I was, but now I don’t feel that compulsive need to constantly check my phone. If my watch doesn’t buzz me, I know I’m not missing anything. That lets me focus on the here and now and not dwell on my “FOMO,” or “fear of missing out.” 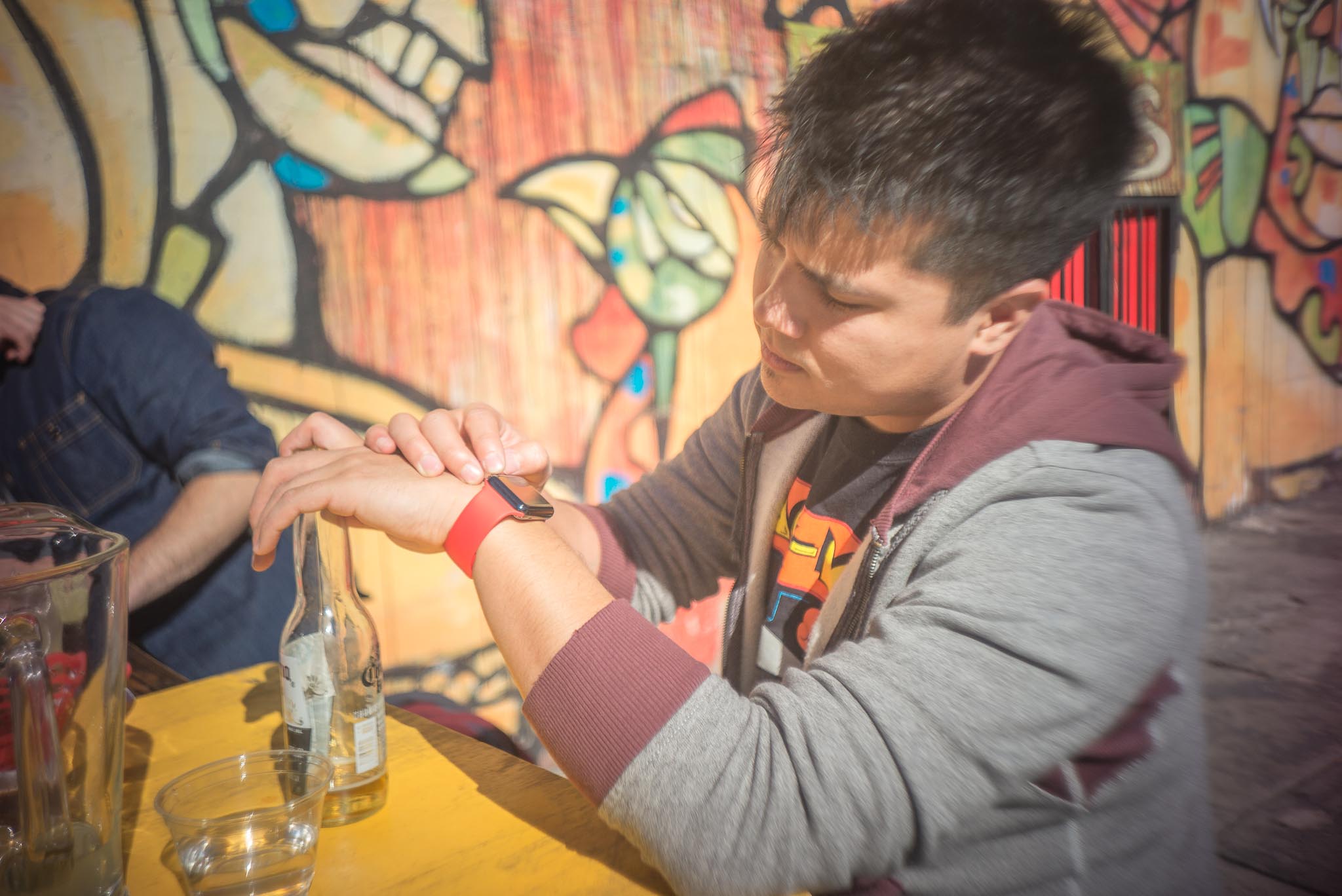 One of the main complaints I hear about the Watch is that it can’t work without your iPhone. To this, I have two responses:

1) It actually can work without your iPhone. It tells time (you know, like a watch should), and when you’re out exercising it can still log your progress (provided you take your phone with you the FIRST time you do a routine. After that, it just remembers the route).

2) Tell me one time you plan to have a watch on your wrist and not have your iPhone within range. When you’re home or at work, it connects via local network Wifi, so you can be connected with your watch anywhere in that zone. When you’re on-the-go, it connects via bluetooth to the phone you absolutely have with you. When I thought about it like this, it made me realize how silly my original concern over how it didn’t have full functionality as a standalone device.

Just so you know, if your watch is connected to a local network/WiFi, it shows a cloud in the upper right hand corner. Otherwise, it’s an icon of a phone. 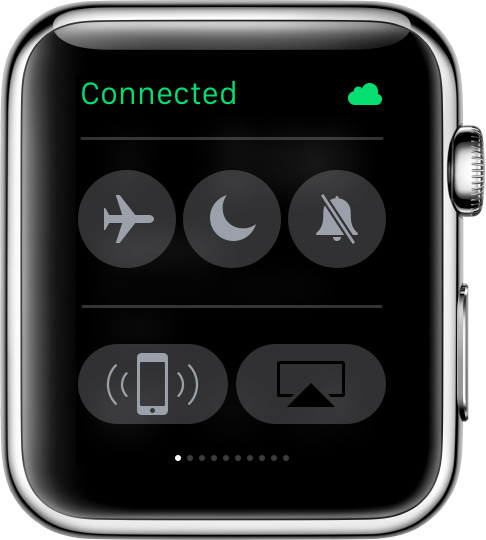 Seeing that photo reminded me of another handy feature that sees more use than you might imagine: pinging your iPhone. In the lower left, that iPhone with sound markers coming out of it is an option to loudly ping your iPhone even if it is on silent. It’s super useful if you lose your phone in a restaurant or in your home… which totally happened to the owner of Resource just three nights ago.

I think people expected the Watch to do more, be more than it is. But you have to ask yourself: do you need it to be? What would be the point of it being more than a watch that not only was an excellent and comfortable timepiece, but also acted as a better way manage your devices? I personally don’t need more than that, especially for $400 (the model I currently wear). That price seems incredibly fair, considering I have paid $400 for a mechanical watch which is 50% of what makes the Apple Watch so great as a wearable. 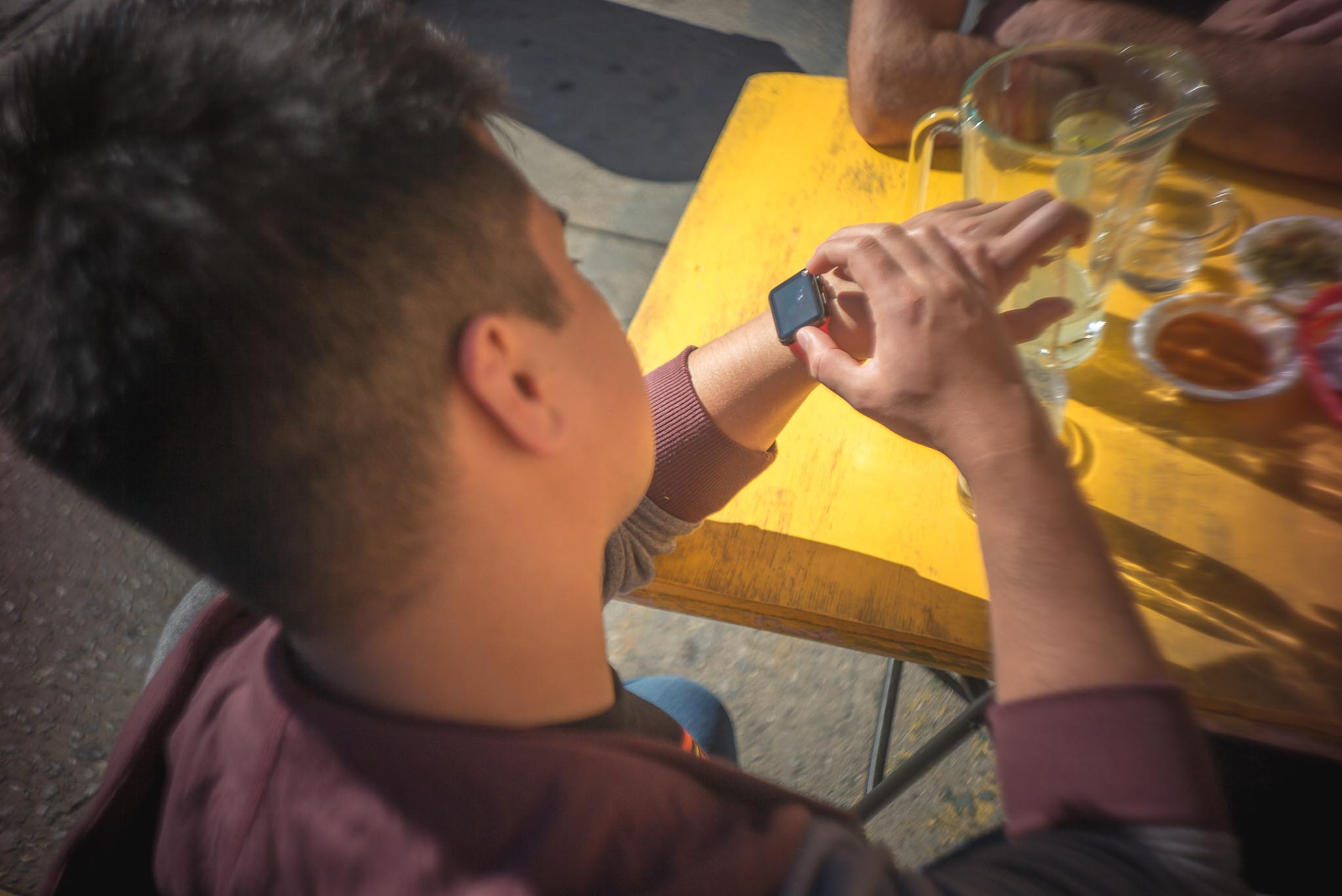 I have a collection of mechanical watches, timepieces that I love because of their beauty and because I respect the artistry that goes into making a watch. But… since getting an Apple Watch, I haven’t worn any of those mechanical timepieces. Not once. The Apple Watch is so damn addicting because it helps me manage my time better, and I can’t really imagine going back to not having it. It’s addicting because of what it frees me from, not because of what it pulls me into.

And I think that’s the key takeaway of the Apple Watch. It basically blitzes “FOMO” without drawing you further into your devices. Having another device did the opposite of what I thought it would: it’s the only piece of additional technology that has actually reduced the amount of time I spend looking at any technology. That’s amazing, and because of that more than anything else that makes this wearable awesome, I absolutely love this thing.

The Apple Watch helps people stay better connected to their devices while at the same time making their lives simpler. If you don’t like responding quickly to things, if you already let emails stack up or text messages go unanswered, you probably won’t see the value in the Watch. And that’s ok. The Apple Watch is certainly not for everyone… but it is for me.