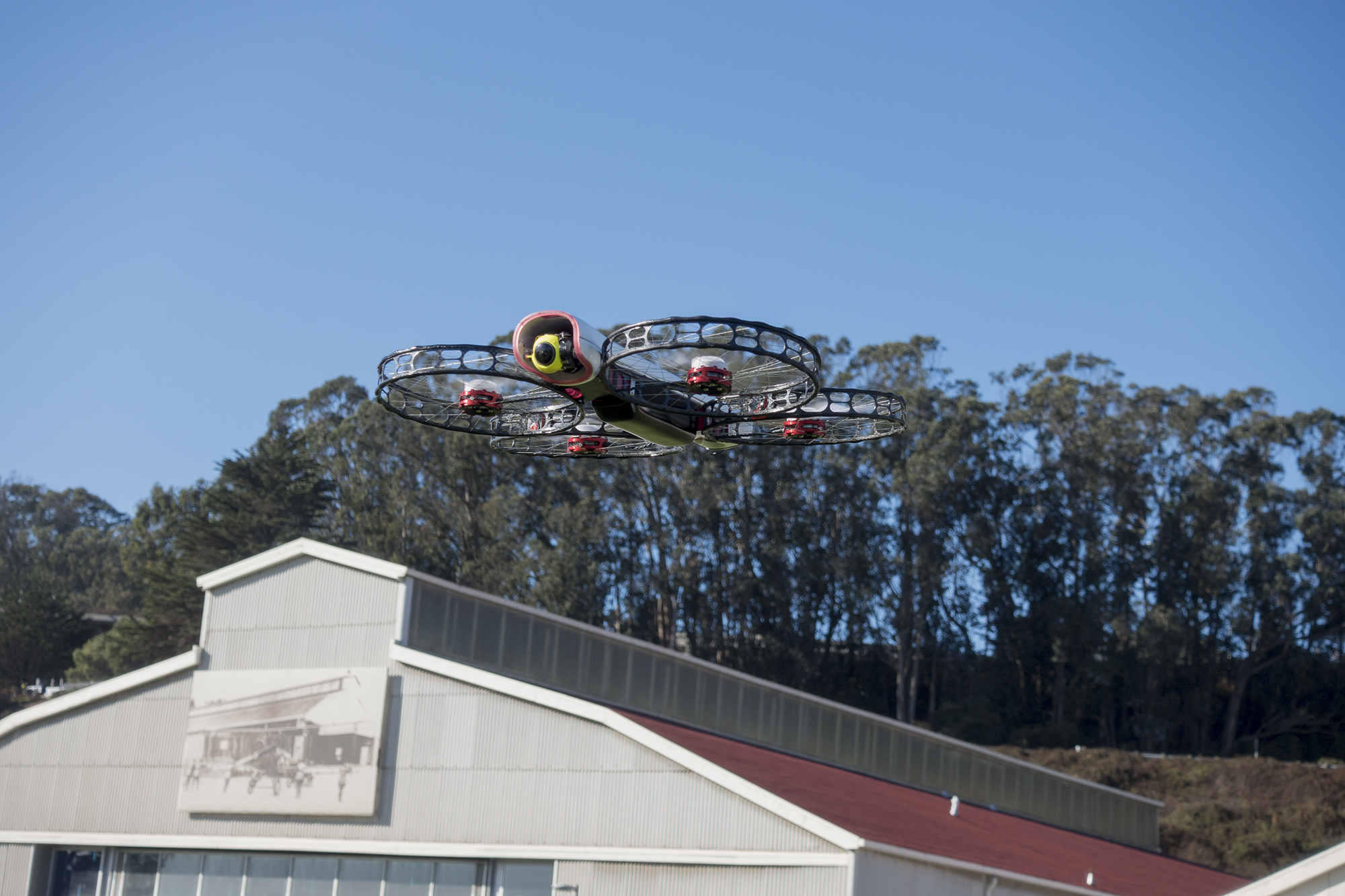 The Snap Flying Camera is Approaching a “No Compromise” Drone Design

Drones are, no doubt, on an absolute rampage in popularity. The hobby has sprouted seemingly hundreds of companies all trying to get their piece of the profitable pie. All you had to do was wander the halls of CES and NAB this year to see that the craze is in full swing, but very few companies really pushed the envelope with design or functionality. It was just a bunch of copycats mimicking the same problems. This is where Snap is changing things. After seeing the drone first hand this morning I have to say, this might be my new favorite flying camera concept.

I met co-founder Tobin Fisher near the Golden Gate Bridge for a demo of his flying camera, aiming to ship in May of next year. This is the first drone demo I’ve ever gone to that was just me and one other guy, and that one other guy was just wearing an unassuming backpack (the same backpack, by the way, that is pictured in the launch video seen above). Inside that little pack was the entire drone. It wasn’t encased in foam, inside a Pelican hard case or gingerly set amongst padding. It was simply tossed in the bag, kind of like how some of us wish we could feel comfortable with our expensive camera equipment.

And that’s the beginning of the beauty of the Snap. It’s an unassuming, incredibly small and lightweight, 4K gimbal stabilized drone that not only does follow-me auto commands easily, but also offers full manual controls as well. You can see how small this thing is. It packs down to basically nothing, and then folds out quickly and easily to it’s assembled form. Every piece of the modular design is held together with magnets, and the power source is a battery that magnetically snaps to the bottom of the little aircraft. 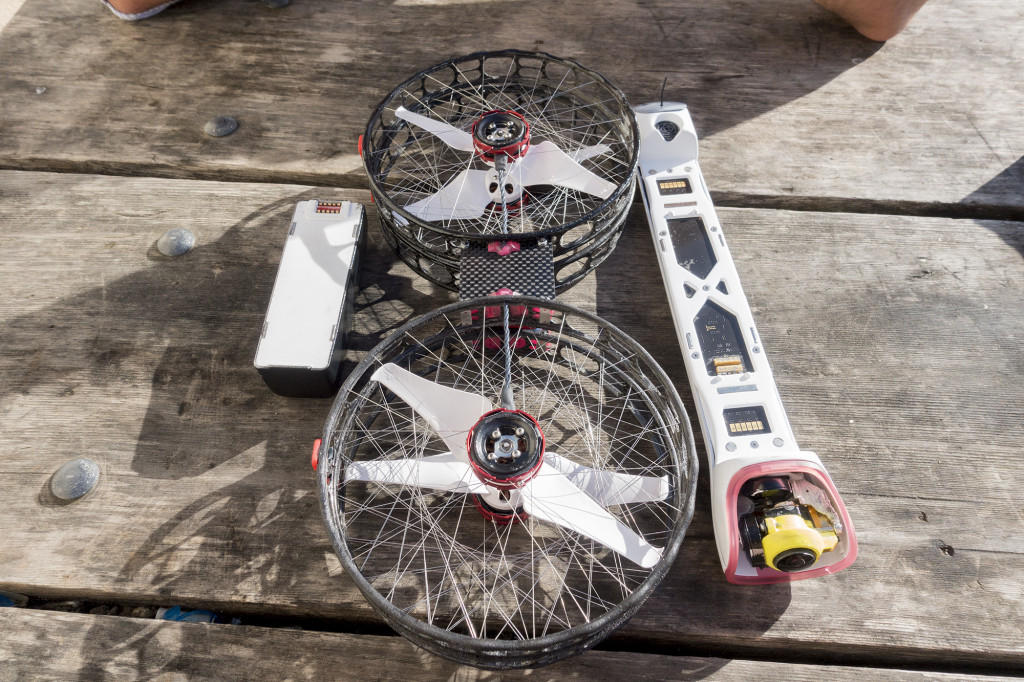 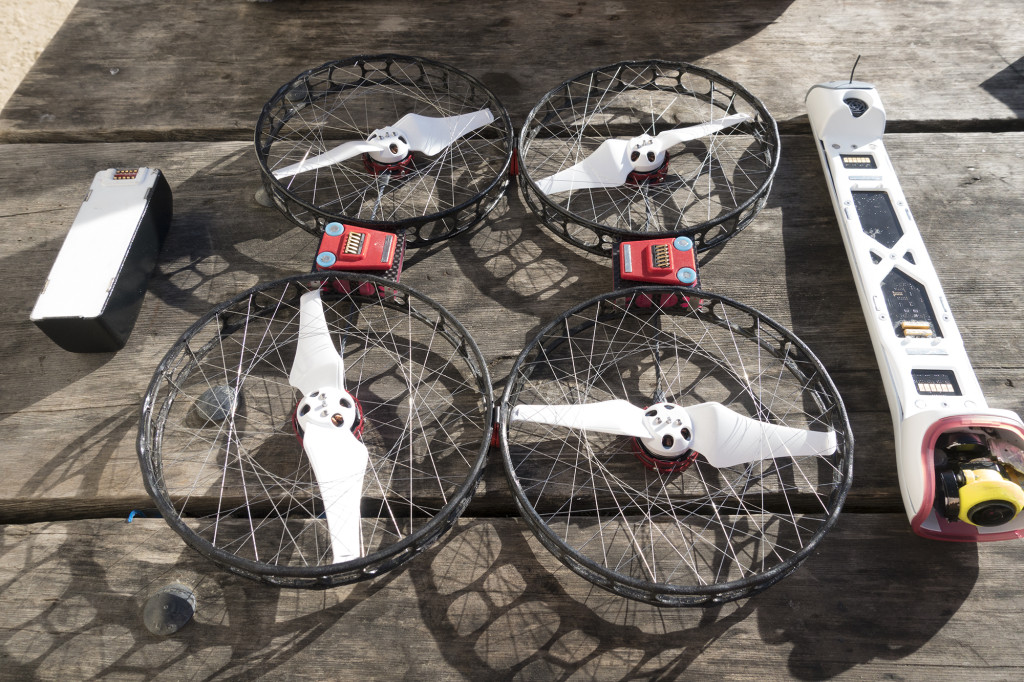 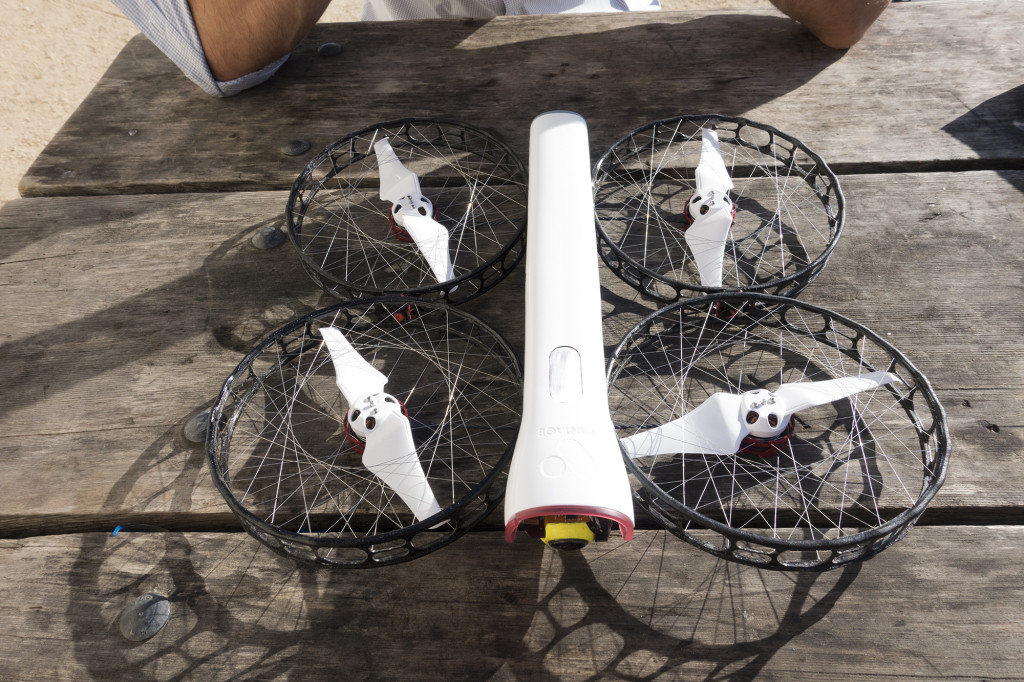 Because the drone is modular, it means repairs are easier to do and parts can be swapped out for other more specialized versions. Snap is going to have different rotors and battery options available in time, making the Snap a drone that is upgradeable much like we are used to seeing with interchangeable lenses on our cameras.

Speaking of gimbal stabilized, Tobin showed me his tiny 2-axis gimbal that is, to his knowledge, the smallest functioning motor of its kind. I have to say, it is very, very small and watching it work proved it does indeed do the job. 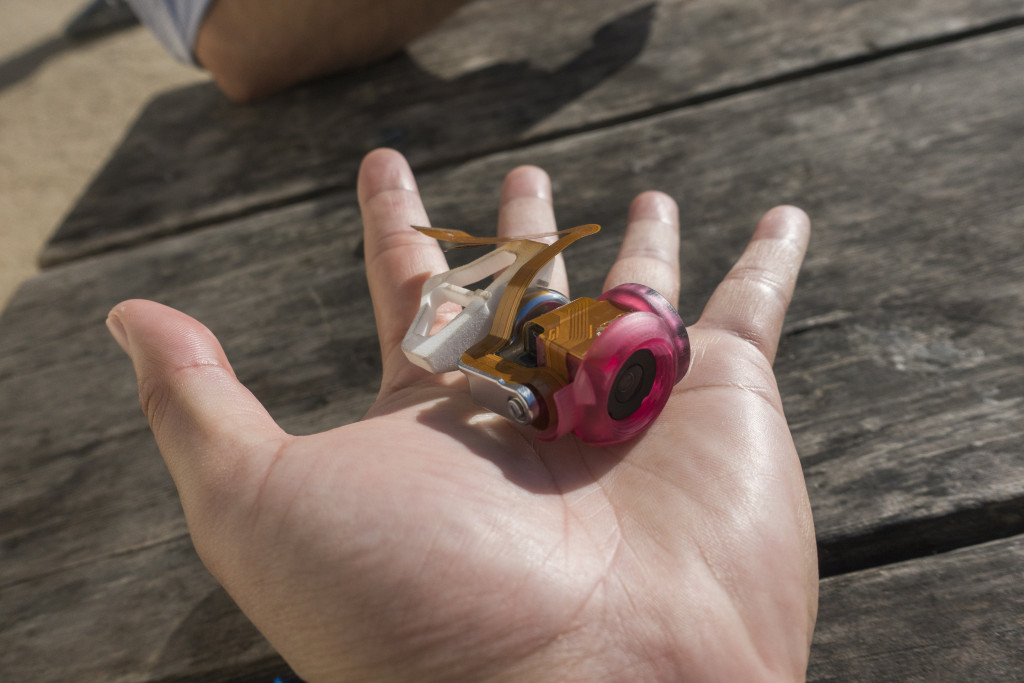 The color and lens shown here are not final models.

On top of all that, it’s going to be very, very hard to hurt yourself or anyone else with this drone thanks to safety precautions Tobin and his team put first and foremost in the design.

Tobin told me how he was intent on creating a safe-to-use drone when he cut himself badly on the spinning rotors of what we typically see on any commercial flying camera. He didn’t even do anything particularly unsafe, the motors simply engaged while he was holding it, and in the time it took him to drop the drone, the blades seriously slashed up his arm.

That’s a situation he wanted to make impossible with the Snap, and after seeing it in person, I believe he succeeded. below you can see how the blade is encased in a “bicycle wheel” style rim and spindles. The system very light and does not impede the drone’s flight at all, a process that Tobin said took a very long time to perfect. 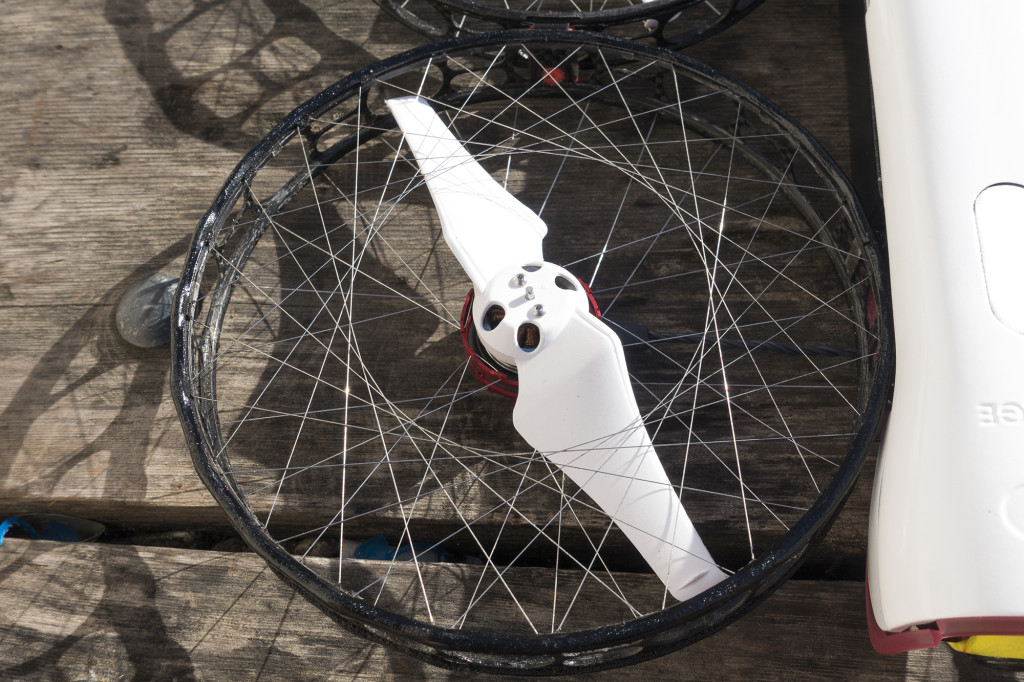 The Snap is controlled with your smartphone, but you can link up video game controllers via bluetooth to your smartphone and use the controller to pilot the drone, if you so desire. Tobin said that many will want that option, but he finds that the Snap is easiest to control with just the smartphone itself. There are a few controls on the screen to determine what modes you want the drone in, and in manual mode tilting and pitching the phone around tells the drone what to do. The response time of the drone to the tilting of the phone was instantaneous, and I was super impressed with how easily it controlled. It will still take practice, but the learning curve is not steep at all.

The auto controls are easy to use as well. You simply point your phone in the direction you want the drone to fly, and tell it how fast and how far you want it to go, and it just takes off. 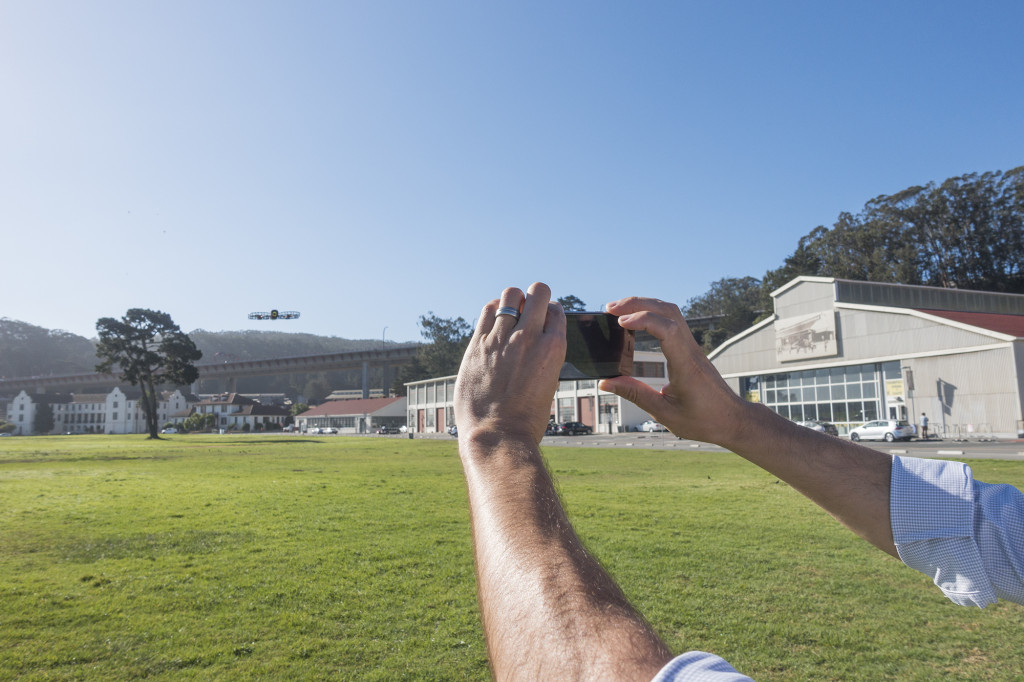 Because the blades are housed the way they are, you can have no fear about grabbing the drone out of the air. In fact, that’s the only way Tobin ever did anything with the drone. It took off from his hand, and he simply grabbed it when he was done. 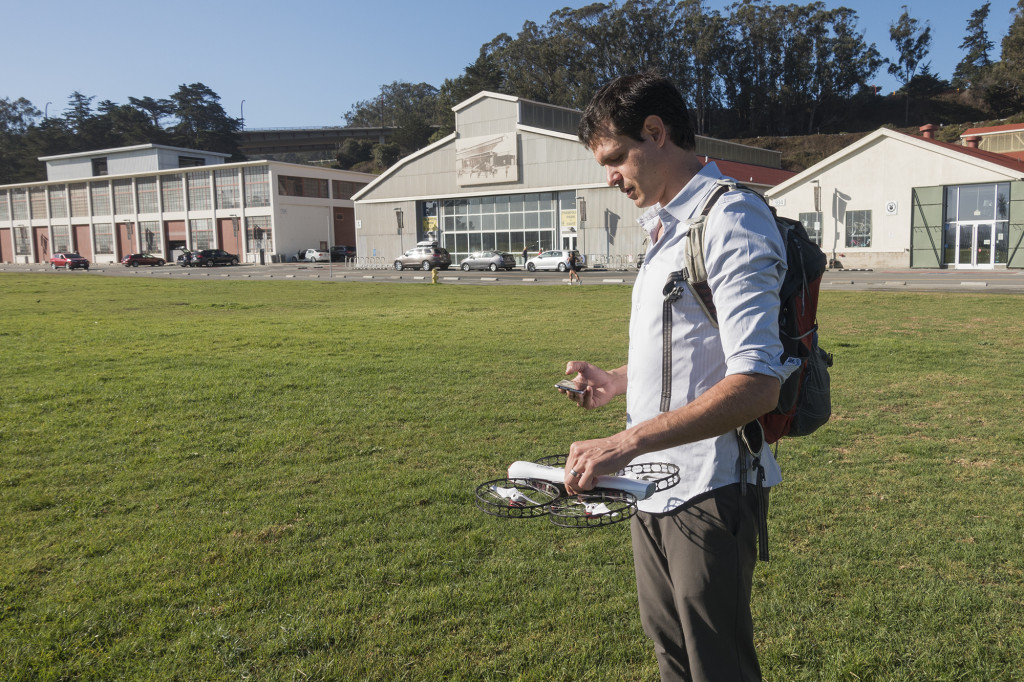 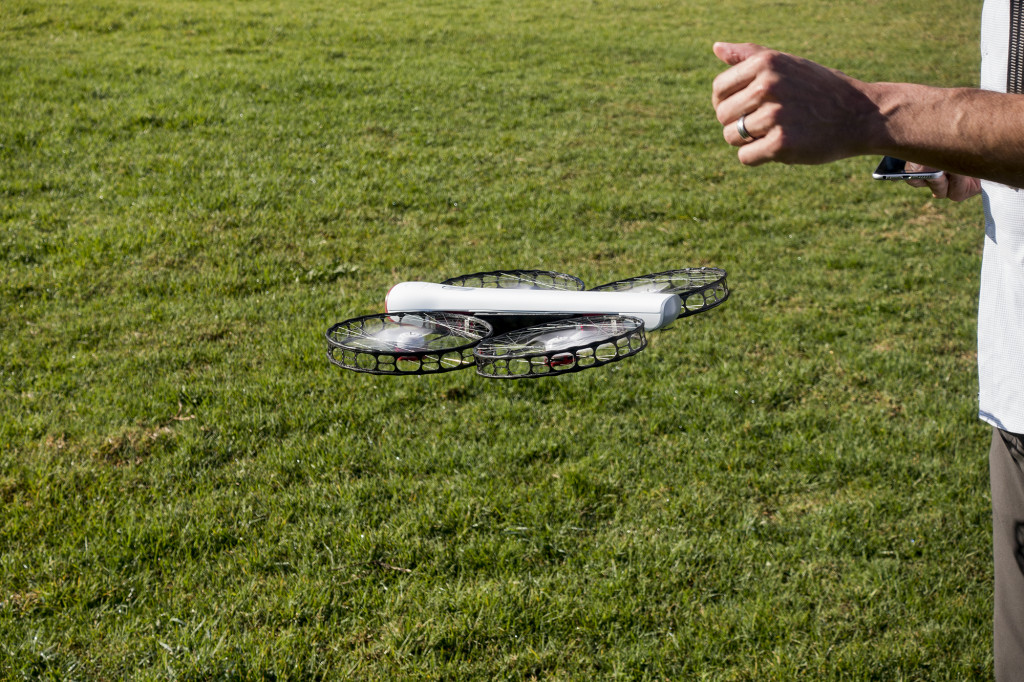 The Snap can fly at 30 miles per hour and do automated flights from your standing location all the way out to 1000 meters… 1000 meters people! At 100 meters this drone is already a tiny speck in the sky. 1000? That’s going to be an incredible aerial view. The drone itself doesn’t really have a way to avoid obstacles like trees, but it does have ground avoidance features. If you choose to have the drone take off and fly out close to the ground, it will automatically move itself out of the way of slopes and terrain, which is a lot more than most other drones can say. 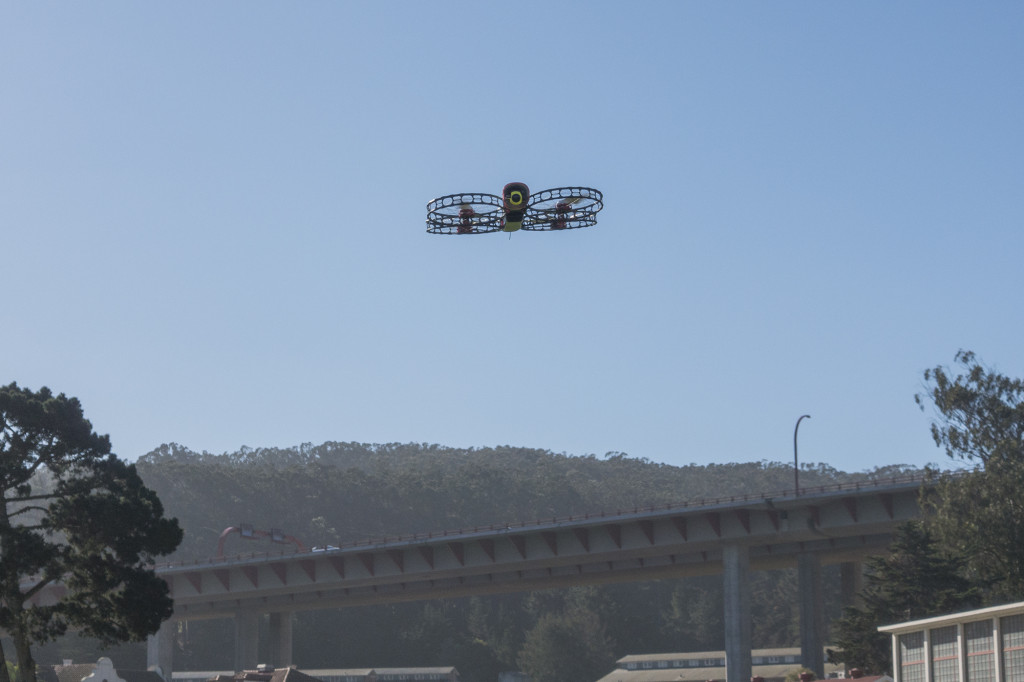 The Snap has a 20 minute battery life, features a 4K Sony EXMOR sensor capable of 240 FPS in 1080, is gimbal stabilized (as previously noted) and weighs almost nothing. Tobin did mention the camera itself is not quite as nice as the Inspire, but the entire Snap unit is a fraction of the weight and hassle of that drone, so it’s not much of a tradeoff to make. 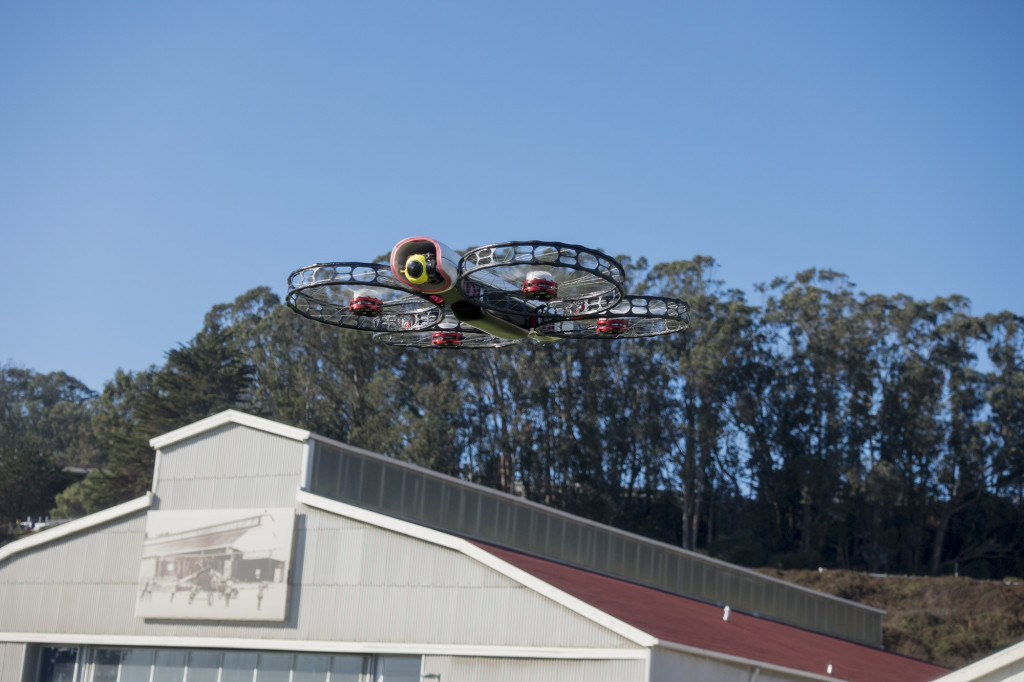 The Snap will retail for $1295 when it becomes available next year, but pre ordering gives a significant discount, down to $895. The Snap isn’t just another recreational drone, it’s designed to be easy for anyone to use so that we as creative people can spend less time dealing with gear and more time shooting. The camera and the stabilization speak to pro use, and I think we’re going to see some great stuff created with these little flying cameras.

The Snap is fast approaching this idea of a “no compromise” flying camera. By that, I mean this is the ideal: “I want a drone that’s lightweight and easy to fly, but also has extremely high quality video options and is perfectly stable in the air… but I also don’t want to have to worry about crashing $1000 into the ground every time I take it out. I also want to be able to upgrade parts of the drone over time. Oh, and I also don’t want to accidentally slash someone with the rotors if an unexpected gust of wind blows in.” If you look at the entire market of drones, really the Snap is the only one that can say “yeah, that’s me” to that whole list.

And that’s something that makes the Snap unique in a market saturated with copycats.

For more information, make sure to check out the Snap website.