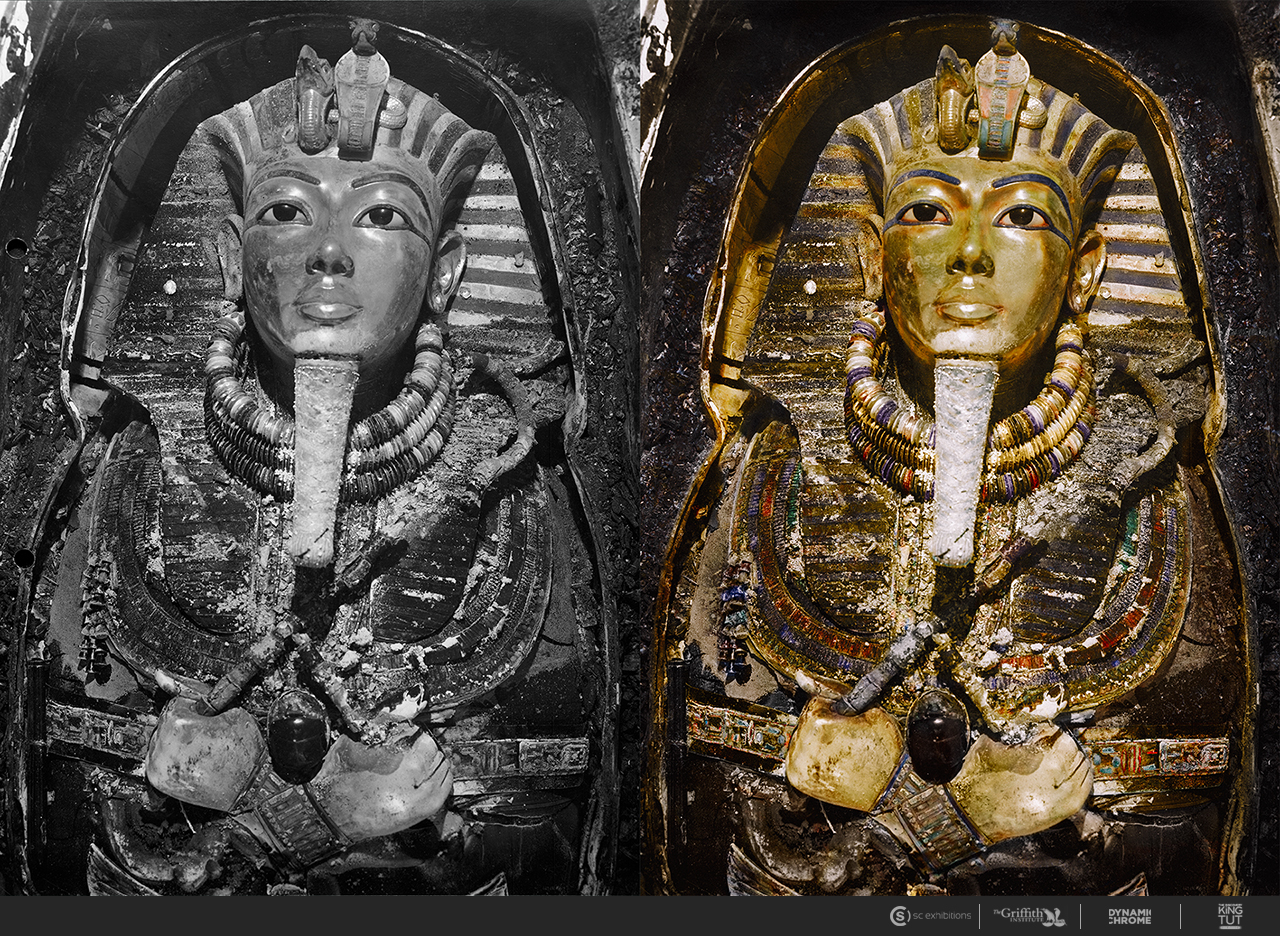 ‘The Discovery of King Tut,’ opening on New York’s 5th Avenue on November 21st, is a new kind of exhibition. Nearly 100 years since the tomb’s discovery in 1922, the exhibition will feature a reconstruction of the excavation site itself with over 1000 precision-crafted replicas that allow visitors to breathe in, walk through, and experience it as Archeologist Howard Carter once did. The tomb’s relics, now scattered across global museums, are expertly reconstructed to give visitors the opportunity to finally view the impressive collection as one whole.

This extraordinary experience was largely made possible thanks to the photography of legendary archeological photographer Harry Burton, who pioneered this method of archeological recording, and have documented every aspect of the work in Tutankhamun’s tomb, from the list inventory taking, to the transfer of the finds to the Egyptian museum in Cairo.

Burton was sent by the Metropolitan Museum to serve as the excavation photographer, and with his enormous camera and negative plates, burton’s devotion to his assignment endured while carrying the heavy equipment between Tutankhamun’s tomb and his improvised darkroom in a neighboring tomb. He documented every step of Carter’s work right down to the smallest details. The result was 2,800 large format glass negatives, documenting all the finds and their location in the tomb. Color photography was not an option for Burton, who made unsuccessful experiments on autochromes. Thankfully, Carter took meticulous notes describing the colors of the findings.

“Carter’s meticulous inventory notes were one of the most invaluable tools at our disposal, which described in great detail the various artifacts that were being catalogued and excavated. Thankfully, The Griffith Institute has transcribed the object cards which allowed tracking down the individual artifacts more straightforward, as in some of the photographs we were looking at over 50 artifacts within a single shot.”

The exhibition will feature Burton’s photos, which have been reconstructed and colorized by Jordan J. Lloyd and his team at Dynamichrome, a company which specializes in colorizing black and white historic photos. 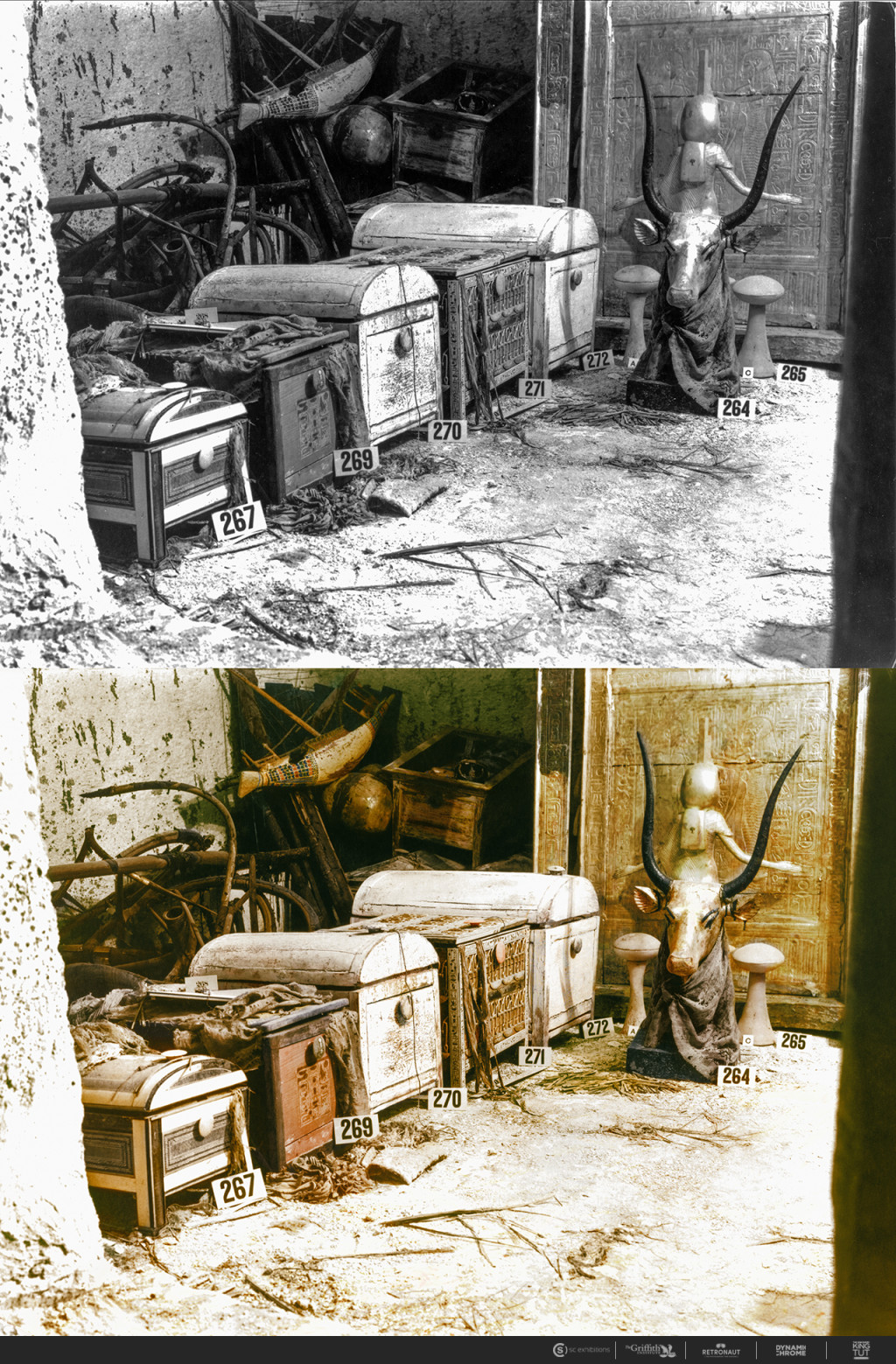 “My background is in architecture and somewhere down the line several years ago, I had made a decision to specialize in architectural visualization, as my strongest skill set was based in Adobe Photoshop (more on this later),” Lloyd told us. “Around the same time, I had a request from my father to restore a heavily sun bleached photograph in the family home – as I took the photograph out of the frame, it was obvious it was previously a color photograph but the sun had bleached all the color and contrast from the image. At the time, I’d tried to adjust the curves and levels to bring the photograph back to life but the damage was too much, and the only thing I could think of at that point was having to somehow re-color it.” 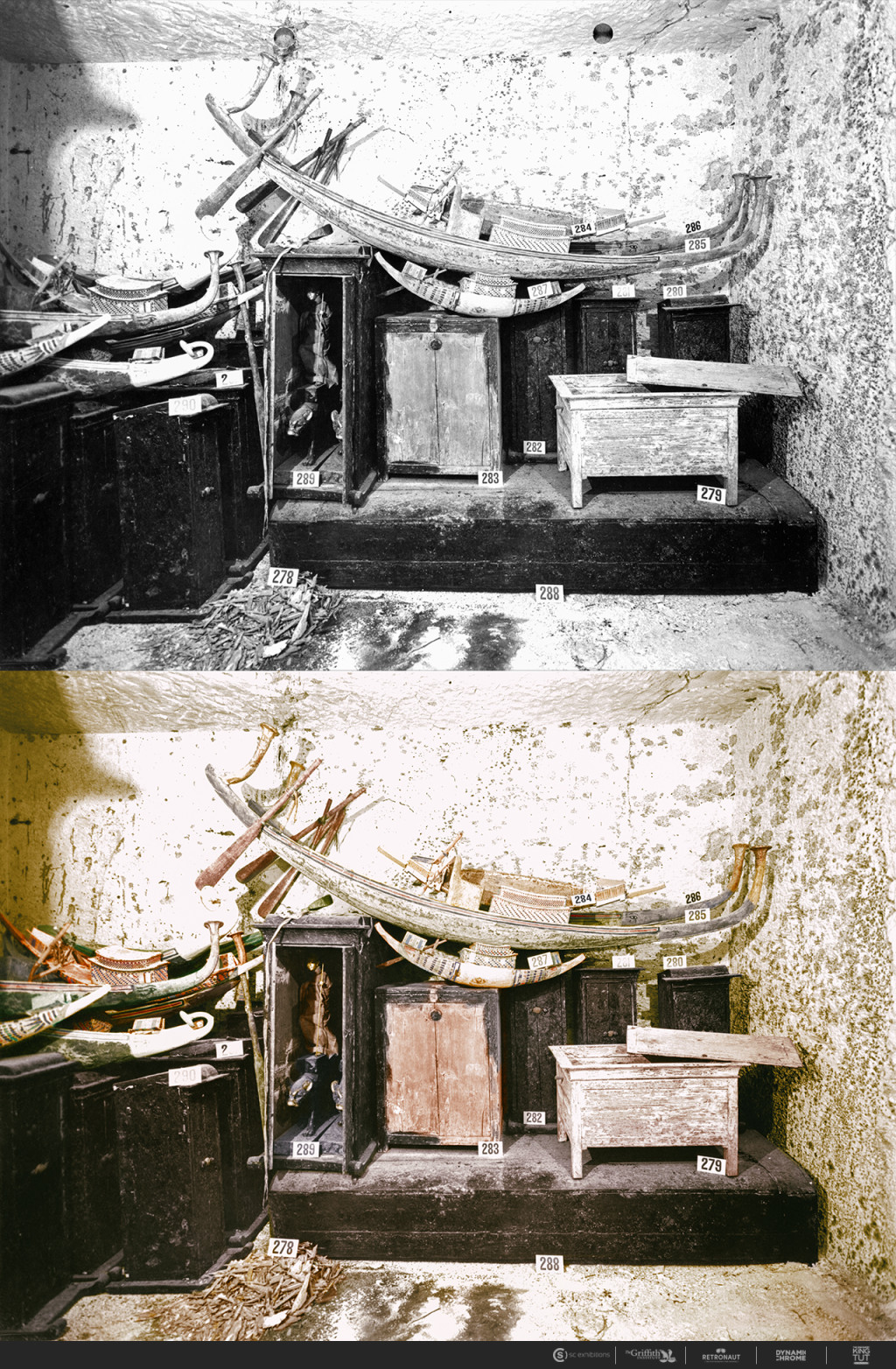 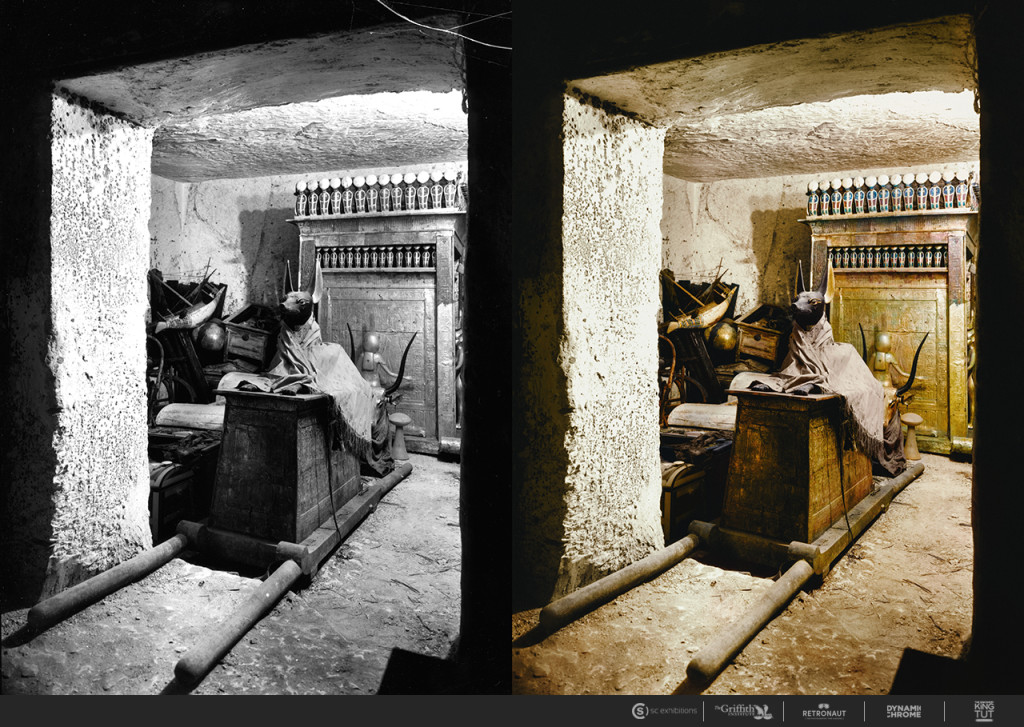 “Around the same time, I was also an active contributor on Reddit’s (in)famous photoshop battles and pic requests, where I had seen quite a few colorizations and I thought, ‘I could do that’, and had a go,” he said. “As I recall, the first ten images were absolutely rubbish, but the eleventh, a request for someone that I thought would be good practice blew up and front paged, and people were offering me money to do more. I’d resolved at that point to get much, much better, which led onto being a mod on /r/ColorizedHistory – a really great community of top notch colorizers and then all of a sudden we started hitting the news, regularly,” Lloyd explained. “At that point I knew I wanted to make a business out of it, and I knew where I wanted to position myself in essentially a very small, specialist field – the photography and processing work is fascinating, but it’s nothing without the historical research which in itself is a completely different beast.” 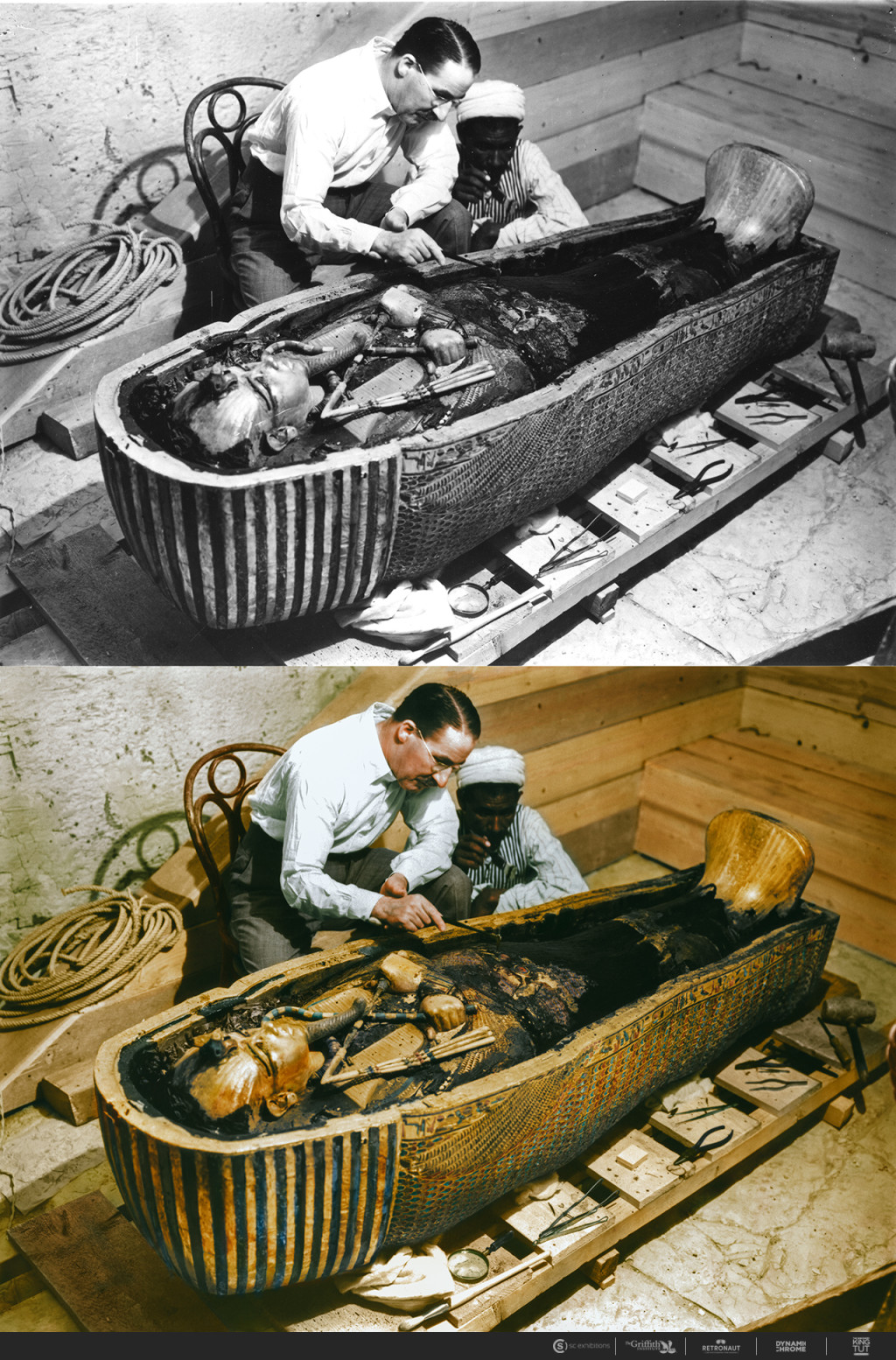 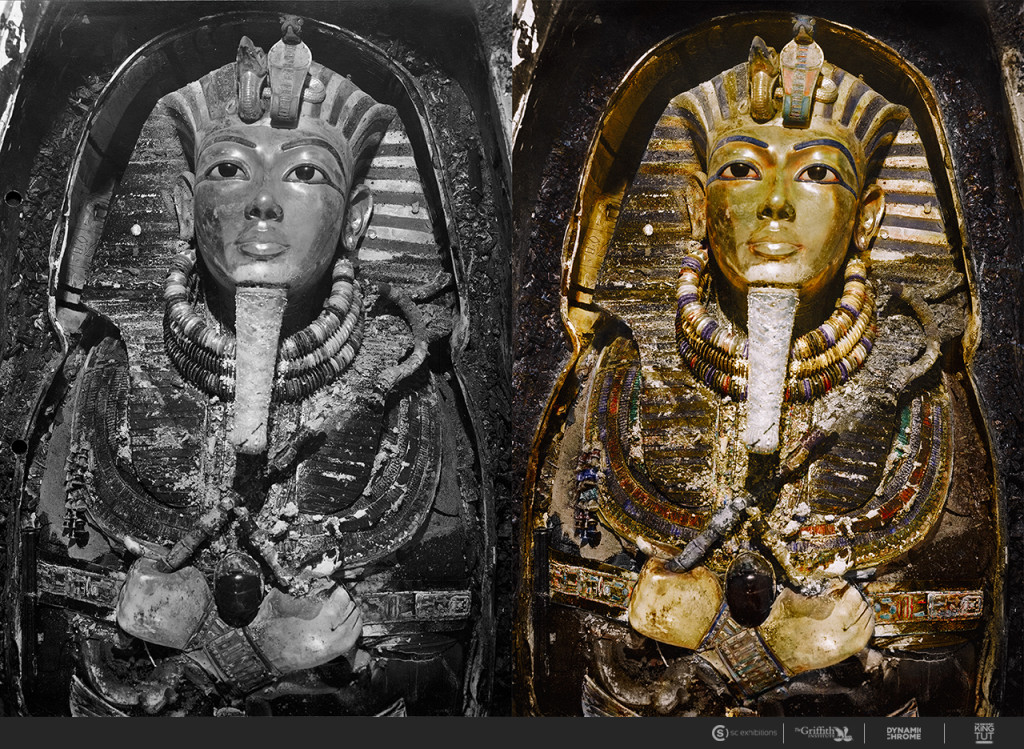 “Several hundred photographs later, and Dynamichrome turned into a registered business and the complexity of running a business from a one man band into a small team and we’re now getting a clearer sense of what our mission statement is. Given the amount of attention colorization has received over the last couple of years, it’s pretty clear that history is in the public interest, and we’re working hard to legitimize digital color reconstruction by exposing the (difficult) process that presents an authentic, slightly different perspective to an original historical record. Given the number of requests we’ve had for other kinds of media like film, we’re now beginning to move into a new phase which is to tackle the subject of ‘history, reconstructed’ altogether. Over the next two years we’ll also be working with various collaborators do bring to the public historically reconstructed environments and architectural visualization, so if you ever wanted to know what a really old church or building looked like in the 16th century, we’re working on it. The way I see it, tackling a particular medium like photography is one thing, but using the same skill sets and a rigorous research process with subjects experts in a much wider arena is very exciting.” 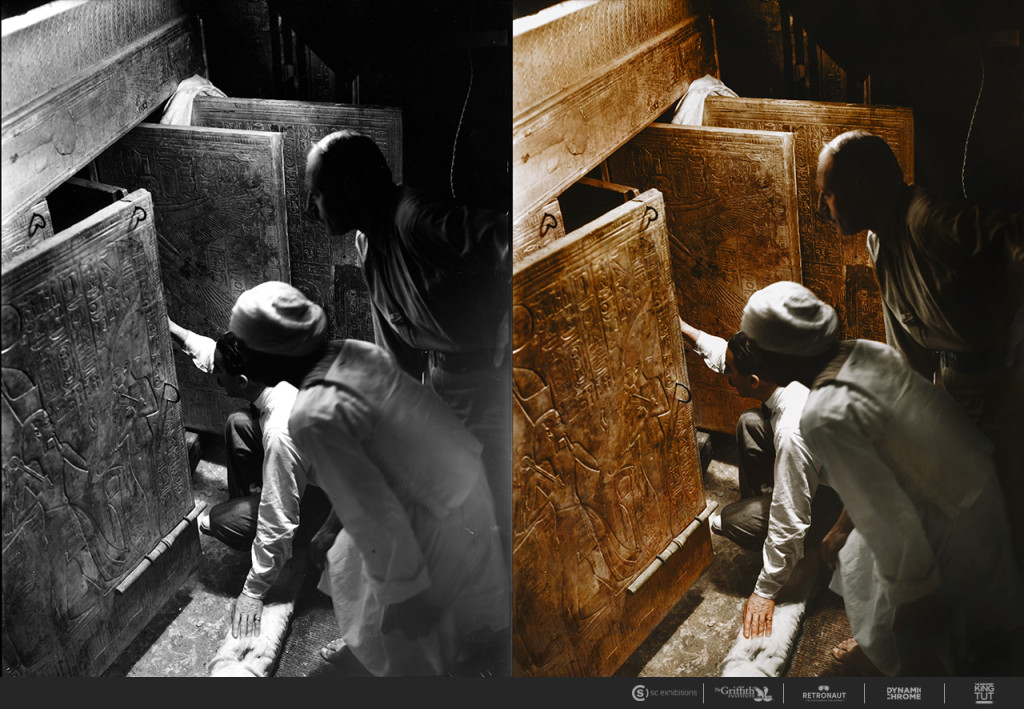 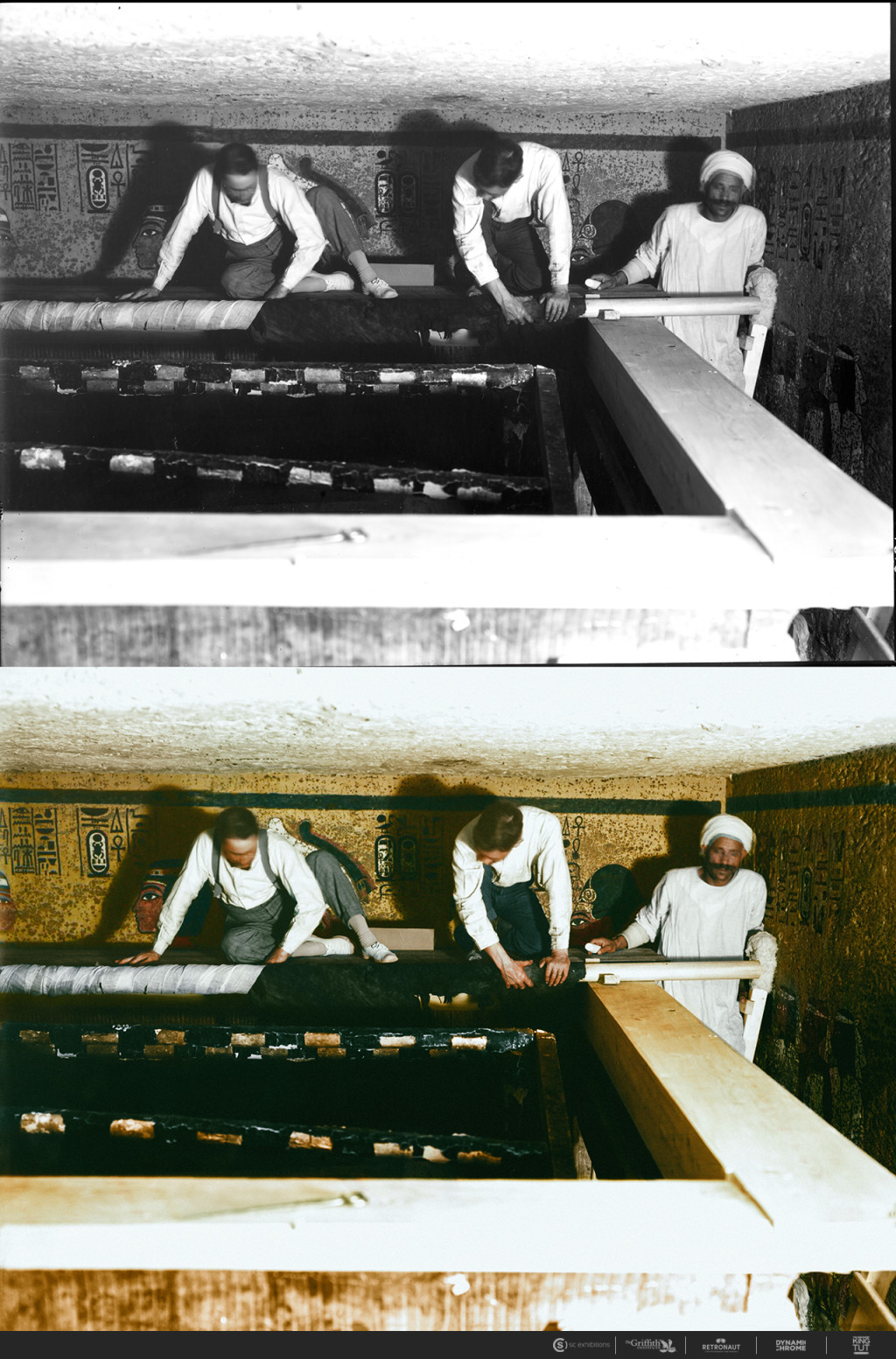 “Our first collaboration with Tutankhamun related photographs, actually happened a couple of years ago, as the Ashmolean Museum of Art & Archeology in Oxford requested a couple of digitally color reconstructed photographs for an exhibition book,” Lloyd explained. “After that, we were always interested in doing a further collaboration, and through curator Chris Wild over at Retronaut earlier this summer, we were put in touch with SC Exhibitions, who were in collaborating with the Griffith Institute on the upcoming major exhibition ‘The Discovery of King Tut’ opening on New York’s 5th Avenue on November 21st.”

“I was also an active contributor on Reddit’s (in)famous photoshop battles and pic requests, where I had seen quite a few colorizations and I thought, ‘I could do that’, and had a go.”

“Carter’s meticulous inventory notes were one of the most invaluable tools at our disposal, which described in great detail the various artifacts that were being catalogued and excavated,” Lloyd recounted. “Thankfully, The Griffith Institute has transcribed the object cards which allowed tracking down the individual artifacts more straightforward, as in some of the photographs we were looking at over 50 artifacts within a single shot.” 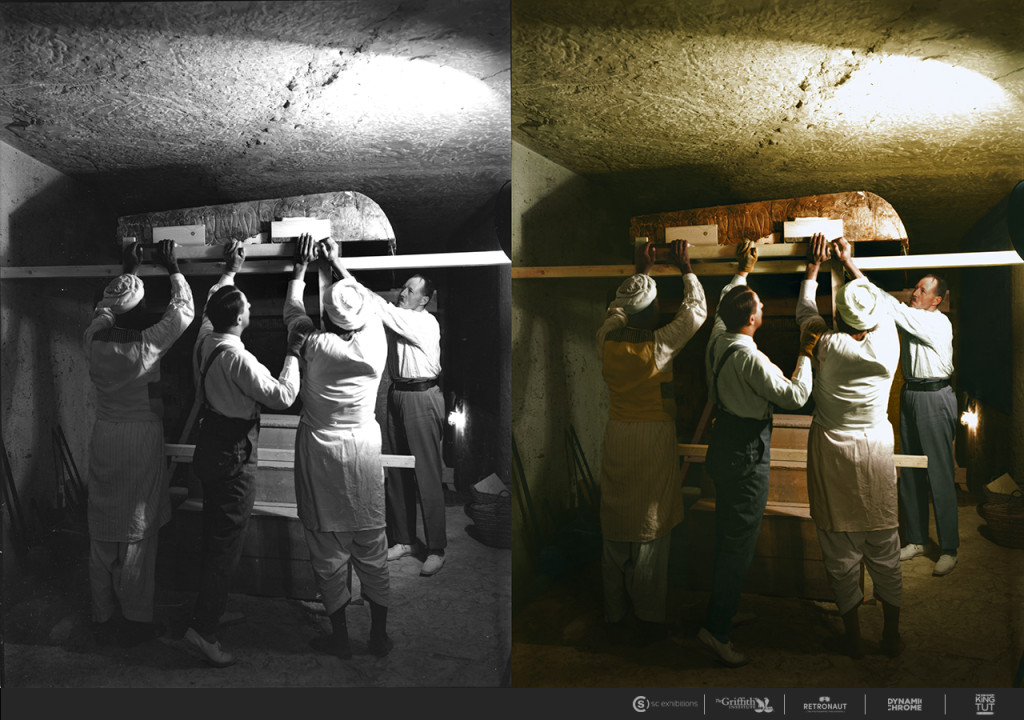 “Our team worked with The Griffith Institute and Egyptologist Dr. Wolfgang Wettengel for particular detailed clarifications, as well as comparing the photographs against the restored artifacts, now scattered across the globe.

“We then took into account the scientific effects of over 3000 years of dust, the lighting present at the time (both natural and oil-lit sources), how light would reflect onto varied surfaces, and even weather complications on the days the photos were taken to recreate an authentic sense of what Burton was seeing through the viewfinder.

“Hundreds of layers of color were added, one at a time, to bring the necessary depth to each image. All in, over 700 hours of work went into the digital color reconstruction of the entire series.

The Griffith Institute has extremely high detailed scans of all of the photographs from the several year excavation, to which Lloyd and his team were given access. “In every shot we looked at, there was an element of minor to medium grain restoration work to be done as part of our preparation process before blocking in the color, which also added a considerable amount of time but the results are worth it when you see the photographs at 100% detail,” Lloyd told us.

“Suffice to say, Burton’s extraordinary photographs are unique given its context and they are framed meticulously – the black and white versions are irreplaceable. Our hope is that when seeing the photographs side by side, the viewer may have a better appreciation for the awe-inspiring views that Carter, Burton and their team experienced.” 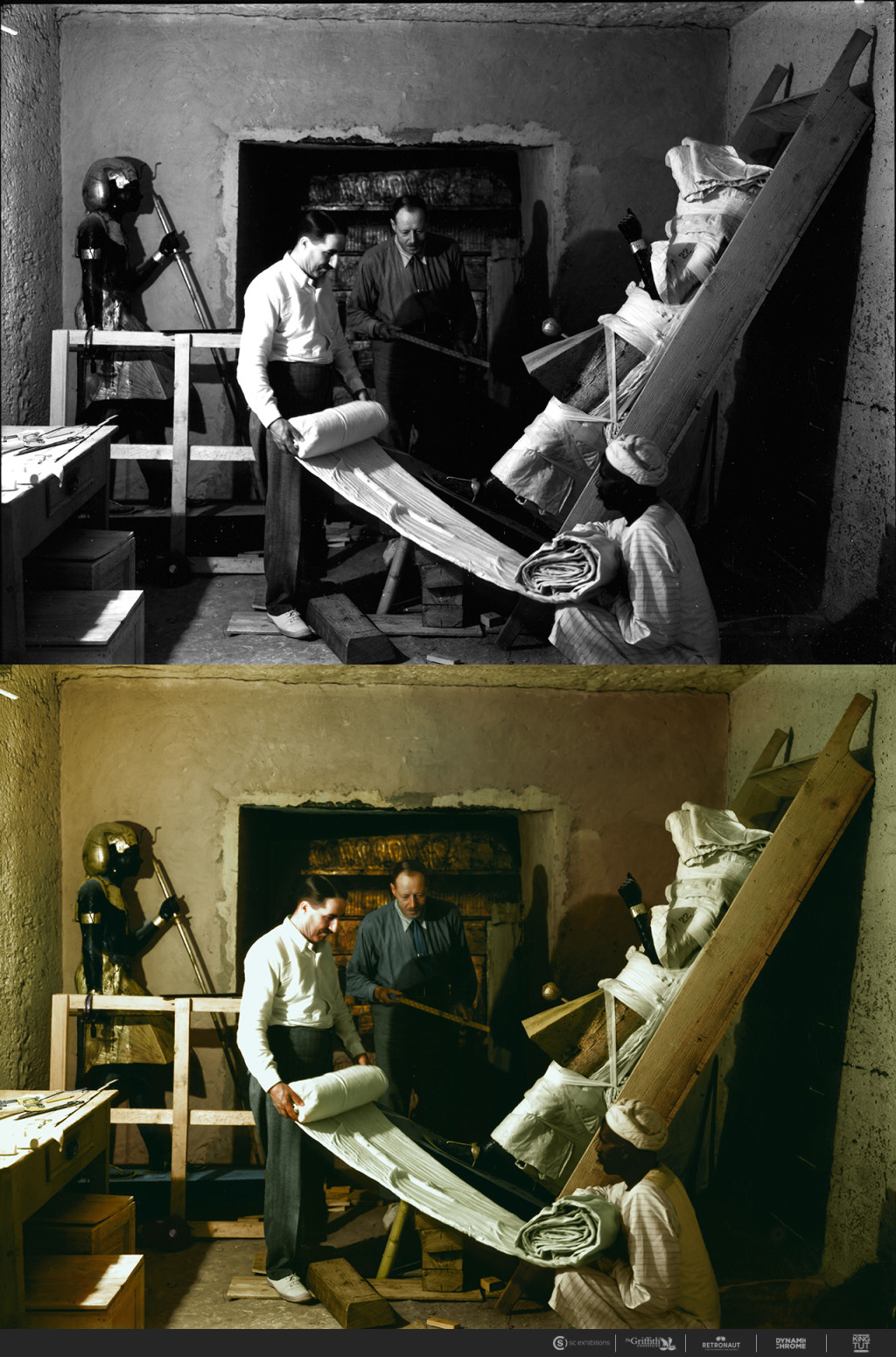 “Initially the digitally color reconstructed photographs of Burton’s originals were intended as part of the overall marketing, though I’ve been told that the exhibition itself will now feature a new addition focusing on the reconstructed color images – we’re also possibly working on a mini-documentary about the process which may feature in the exhibition,” Lloyd continued.

Lloyd explained how Dynamichrome came to be and has grown to what it is. “Dynamichrome has expanded into a small team of people who work mainly remotely, and its the reason why we can move forward into expanding our current role,” he said. “Depending on the workload, the restoration and color blocking is shared between the image specialists where the aim is to prepare the photograph for the color pass based on extensive research. In 99% of cases, photographs received need some form of minor to major restoration work and tonal correction to try and get the photograph looking like the condition it was at the point of its creation: foxing, mildew, cracked glass, dust, scratches etc. which I’m sure as many people know is a laborious process. We’re actually getting better at doing reconstruction work for really badly damaged photographs, which presents a completely different challenge.” 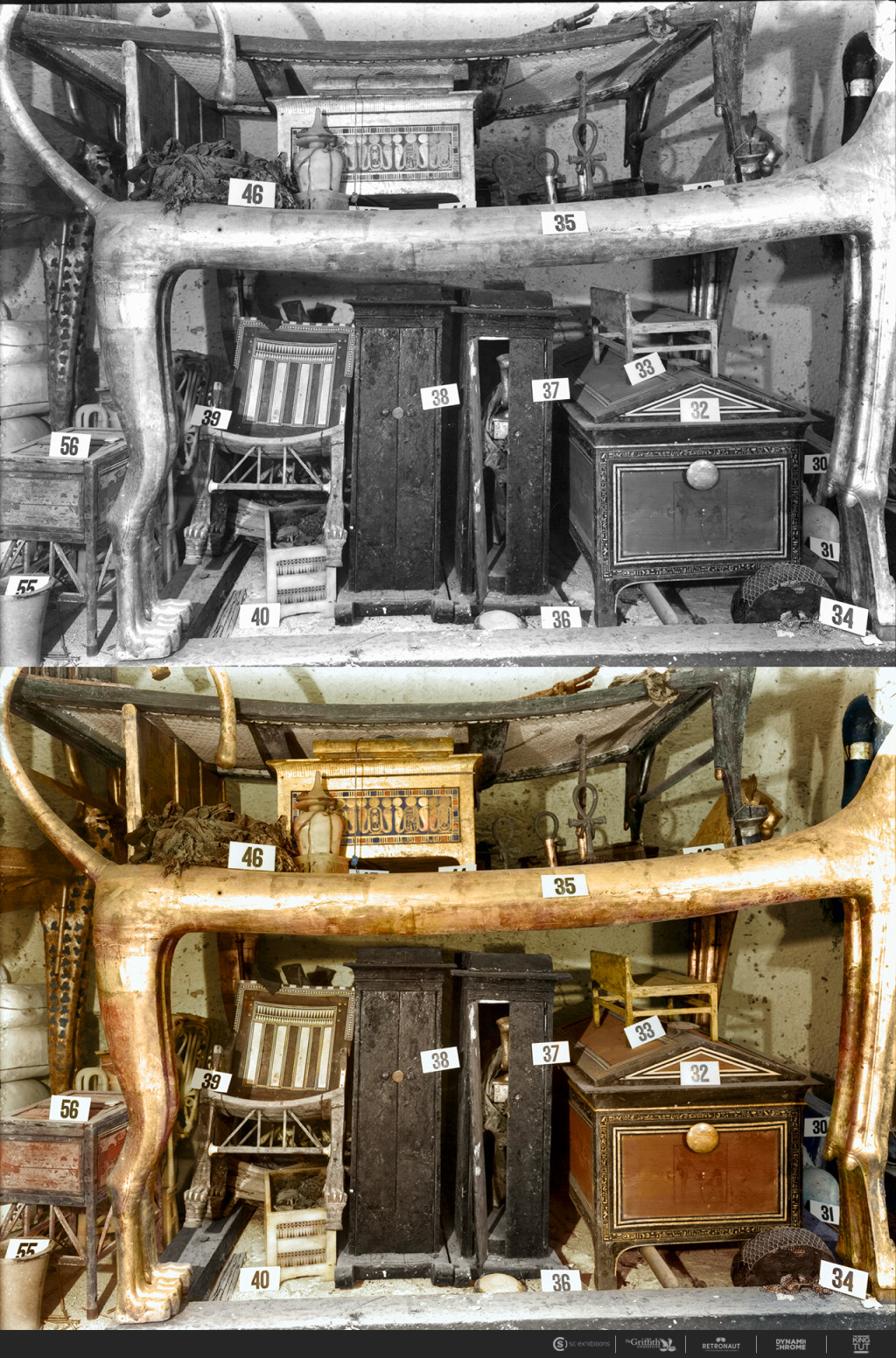 “We also have a burgeoning network of writers. This is really important to us, because the story behind the photograph is usually incredibly interesting and we want to make it accessible and informative. Over the next year we’ll really be focusing on this and therefore the value of the image is increased greatly because there’s a compelling story we want to share – not just about the context, but also a retrospective looking back and all kinds of other stories attached to it, like the lives of the photographers, or what happened to companies whose adverts you can see in the photograph, etc.” 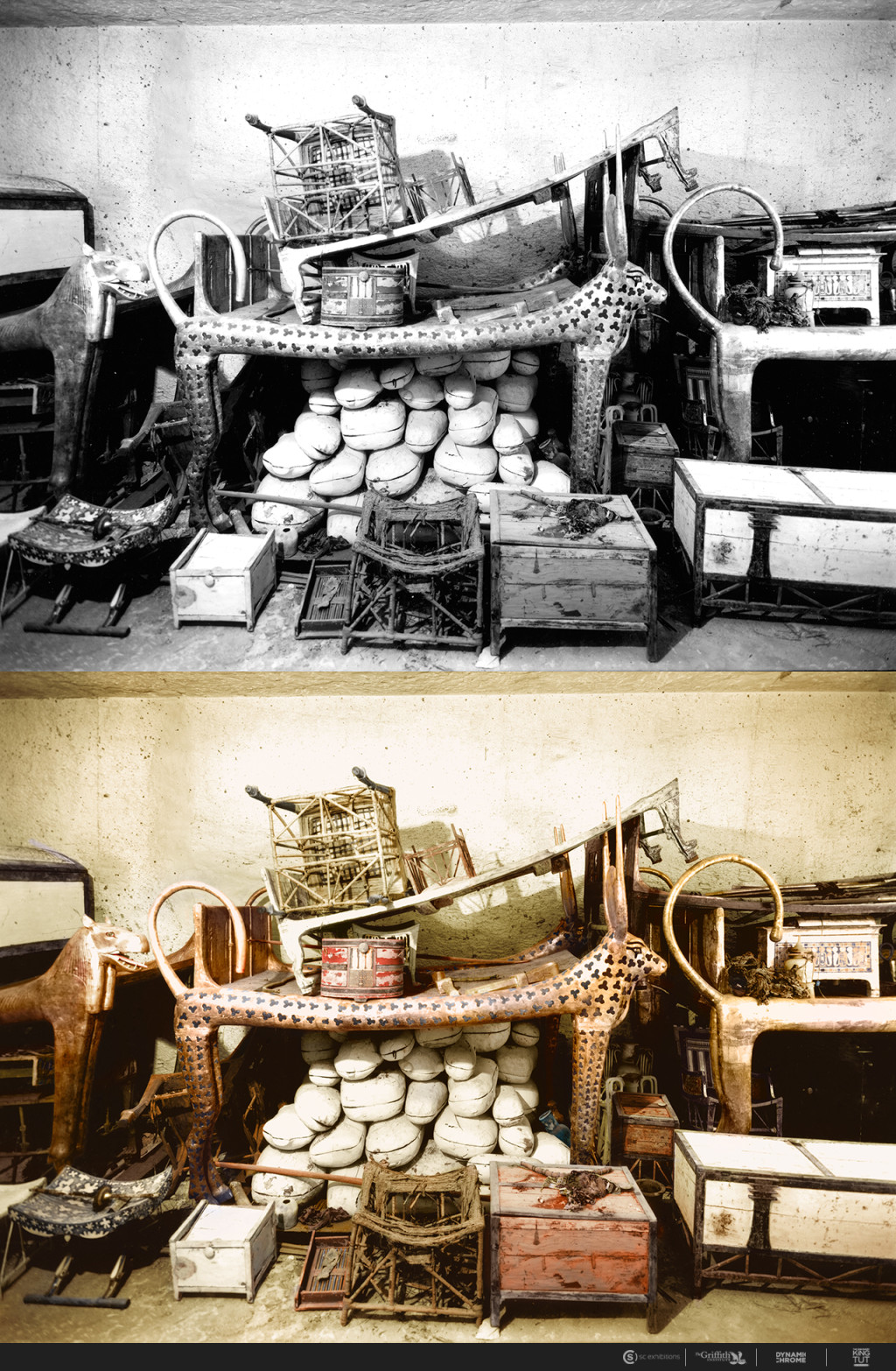 “Tying this together is Emily, our Content Development Manager. Rather than take a scattershot approach and just keep churning out random photographs, our strategy is to have an active calendar of new content and stories that tie into national holidays, historical events and so forth that bring a relevancy to the content and make them topical. We often find that history tends to repeat itself and it makes a lot of the content eerily as relevant today as it was a hundred years ago. Further, we work together with subjects specialists either on a project basis, but we also have regular consultants who we work with like Jaana, a textile conservator whose knowledge of clothing, garments, costume and period dress is quite staggering.”

Check out more information about The Discovery of King Tut here at tutnyc.com and dynamichrome.com.