From Rain Umbrellas to LED Lighting: Inside Westcott’s 100 Years of Innovation

The history of lighting manufacturer Westcott dates back to 1899, when the company was predominantly known for its ornate rain umbrellas designed for commuters, and eventually, for golfers. Back then, operations functioned directly alongside Haas-Jordan, a brand that continues to produce umbrellas today. Together, the two went on to bring the first fiberglass frame umbrellas for the golf industry. But it wasn’t until about 1985 that producing reflective umbrellas for photographers and videographers became Westcott’s core focus. A view of the umbrella factory in the early 1900s

“In the late 1980s we started in photo,” says Westscott President Kelly Mondora. “We began building umbrellas for OEM (original equipment manufacturer) accounts for different kinds of flash, and because we were the umbrella people we knew how to build a good umbrella.”

Mondora joined Westcott in 1997 as a temp employee, in which her main duties were order entry and secretarial work. “Throughout the years I moved up,” she says. “I started as a temp, then moved on to customer service. I was the director of purchasing and then the director of operations for the two businesses. I eventually moved to vice president of Westcott and then to president.” Within this time, Mondora experienced Westcott’s evolution into one of the photo industry’s most storied lighting companies. But perhaps all of this truly began about 20 years ago, before Mondora joined the team, with the invention of the Scrim Jim, a product that’s become a household staple for thousands of photographers and filmmakers around the world. 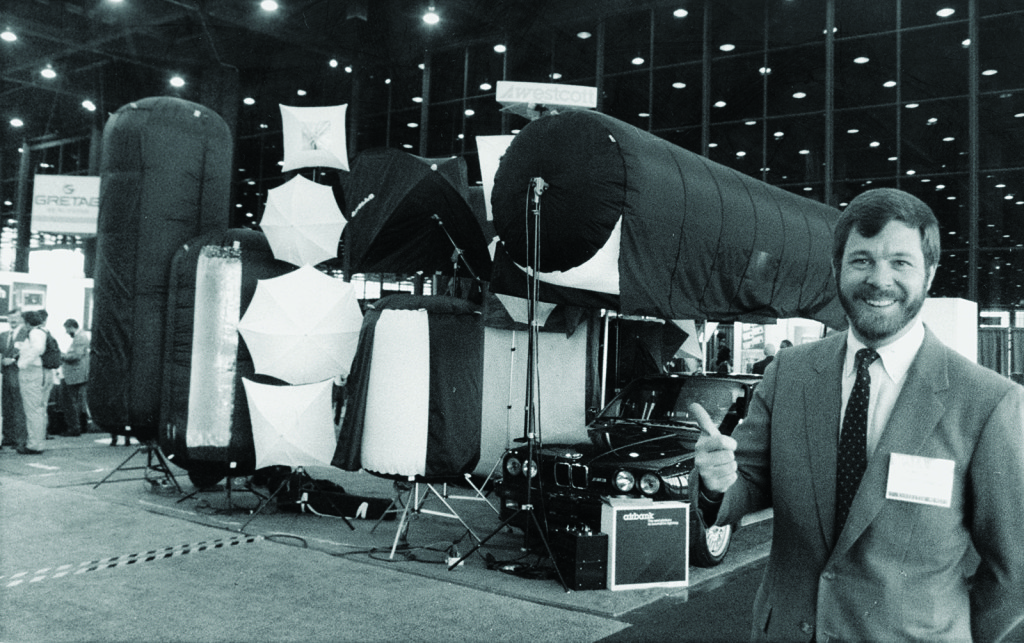 Former President and current Chariman of the Board, Tom Waltz posing at Photo Plus Expo in New York City during the early 90s

The Scrim Jim is a diffusion system designed to remove harsh shadows and light from an image. It’s known for its durability and resistance to harsh, outdoor conditions such as wind, but also for its frame that’s constructed with aircraft aluminum. “The Scrim Jim was developed in Miami by fashion photographer Philip Nash. He was sick of reflectors being blown around like a sail,” says Mondora. “He developed a rudimentary form of it with a panel-type system that wouldn’t fly away. The product has very much been the same for the past 20 years, but this year we made some changes. We looked at our needs and our customers’ needs and realized we could do so much more with a modular system.” The Scrim Jim on the set of a Hollywood film

The modular design on the new version of the Scrim Jim allows every frame to create up to four different sizes. Westcott also offers 35 different fabrics, and the system weighs less than three pounds. Additionally, extension kits are available for those looking to increase its frame size, collectively making it an ideal light control system for shooting both in-studio and on-location. “Nash really saw a need for a diffuser that was held together by cloth—not by screws or clamps,” says Brad Matthews, Product Brand Manager at Westcott. “He would basically hook and loop the cloth—now we use velco—and would essentially have a custom product that was tailored to the shoot he was on. Now, about three decades later, it’s continued to be used in studios, and you even see videographers using it to diffuse reporters when shooting live news coverage.” Behind the scenes photograph of a photo shoot in the late 80s using Scrim Jim, Backgrounds, and Westcott Light Modifiers

But while this was one of the first instances that Westcott worked alongside an industry professional to create a highly successful product, it didn’t end here. Around 2010 at the WPPI expo in Vegas, for example, Mondora  sat down for dinner with wedding photographer Jerry Ghionis. She asked him: “What is the one thing that’s missing from our market that would make your life easier as a photographer?” Ghionis responded by using a napkin to sketch his idea for a portable, battery-powered light that comes perfectly diffused, which takes away the need to add modifiers. And less than two years later, the first sample product was released. Today, this is known as the Ice Light—Westcott’s first LED lighting product. “We like to listen,” Mondora adds. “One of the most important things we do is go to the trade shows, talk with the top pros, go to workshops, and find out what is and isn’t working for them.” 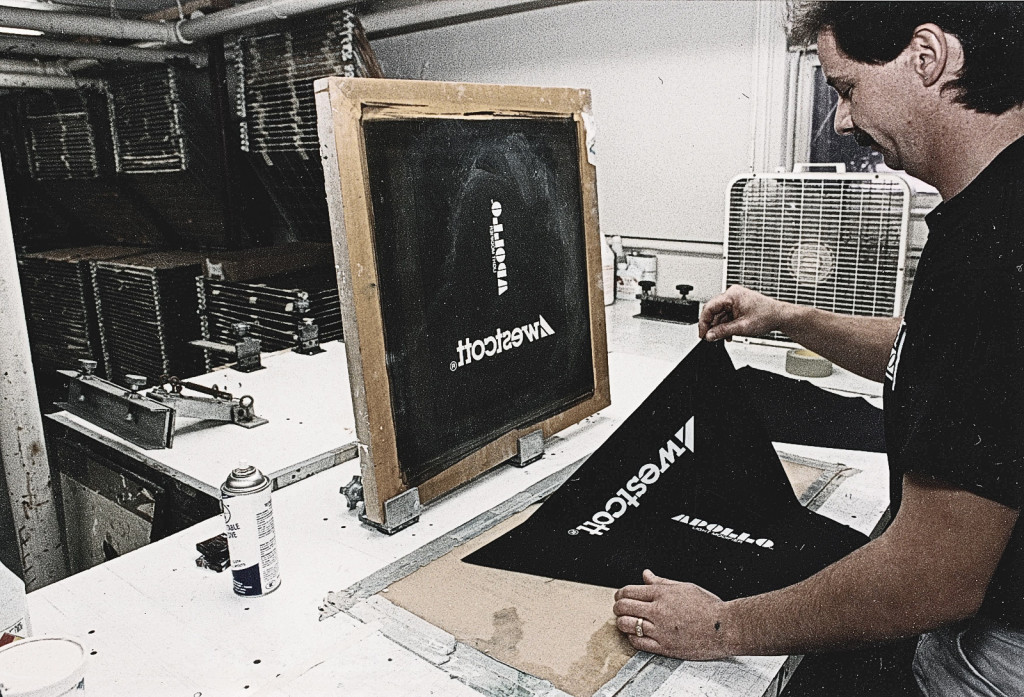 Since then, Westcott has released a handful of new products. Of late, one of the most popular has been the 4-Light Flex Kit, created alongside headshot master Peter Hurley. The kit is water resistant and includes four Flex Mats—two 1’x2’ and two 1’x3 foot arrays of LED lights that can be bended or molded to fit any shape—and, of course, four Scrim Jims to diffuse each light. Additionally, these lights are fully dimmable and daylight balanced at 5600K with a CRI (color rendering index) of 95, making them highly capable of accurately reproducing colors. Nevertheless, this is just one of the many innovations Westcott has released in recent years—visit fjwestcott.com to learn more about their full line of products. Peter Hurley and pictured alongside the Flex Kit

“Since I started working with Westcott, the biggest change I’ve noticed is how much quicker products can be brought to life, and how much smaller and more portable everything is becoming,”Mondora concludes. “Things are moving faster, and as a company you need to be able to respond to that change,” which, perhaps, is why Mondora tells me that Westcott already has its product releases planned for the next two years. 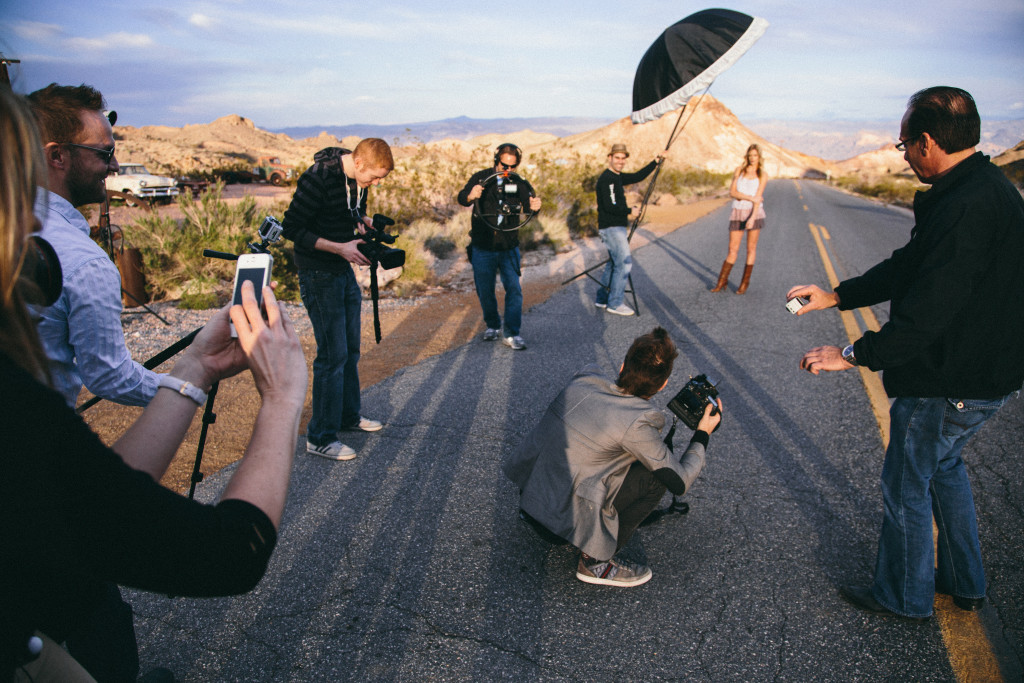