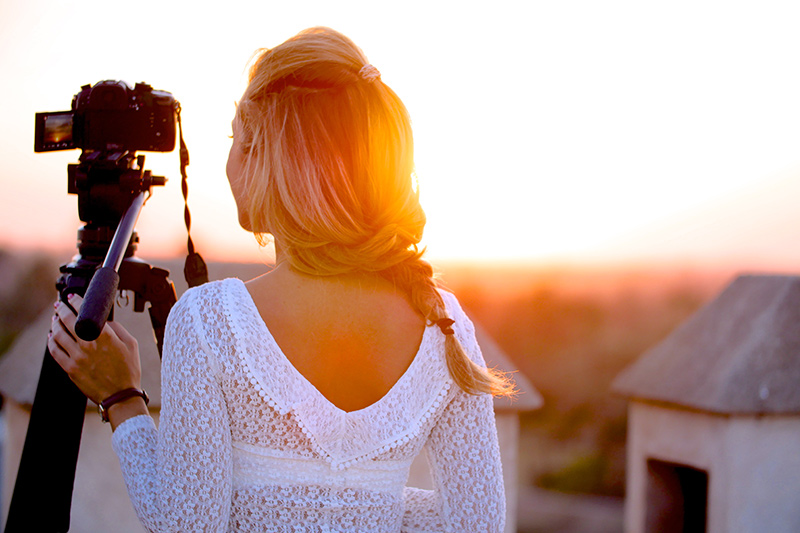 Kylie Flavell might not be a household name to some of you, but she has been steadily growing in the ranks of internet stars, with shows like “HookedUp,” garnering millions of views on YouTube. What makes her story unique is how she went from a corporate 9-5 job to traveling the world for a living… all the while producing, hosting, shooting, and even editing, all of her own video content.

I spoke with her to find out how she found herself in this line of work, and what it took to get there, hoping that others might find inspiration in her journey to doing what she loves for a living.

Like many of us, she found herself yearning for something more in her life after spending years working a traditional 9-5 job. It was after a holiday trip to Italy, when she returned home full of motivation to chase a goal of living a life with more spontaneity and passion. Flavell knew it would take some time to prepare for such a life change, so she made a long-term plan for her escape– which would mean making a show where she could travel and share stories from those adventures.

I stayed in my job for one year, saving money, devouring as much info on the market as possible, networking with television and production houses to learn from them, finishing work at 10pm and then coming home to work every night for five hours to move my plan forward, little by little.

So Kylie worked hard to put herself in a position to not only to make a successful move financially, but also learn the skills necessary to seize an opportunity when it presented itself. She didn’t simply pitch a show and jump on a plane the next day, there were many rejections before someone took a chance for her to produce a pilot travel show.

I was the creator, host and producer of my first show, organizing everything from catering, locations, accommodation and transport, to sponsorship, music licensing, release forms, branding and marketing. It was a roadtrip through Italy talking about food, travel and dreams; the schedule was grueling and the budget tight but in terms of video production jobs you could do a lot worse!

This is the show that was developed:

Flavell learned a lot during this first experience, and this led her to wanting to take ownership of other parts of the production.

I quickly realized that it would actually be the best use of my time if I taught myself how to film, edit, colour grade and handle distribution so that I would become the most nimble, cost-effective and innovative production company in the market.

The words “trial by fire” come to mind, when Kylie attempted to tackle her first show alone in Florence. Despite having to deal with all of the gear herself, bad weather, and trying to learn things on the fly, she discovered that by being her own solo-crew, her interview subjects became much more honest and open.

It rained the entire time and I strapped my film equipment and 10 wardrobe changes to a bicycle and rode from location to location while clumsily holding an umbrella to keep everything dry. I looked like some crazy bag lady and I made so many mistakes with the audio and the camera settings but I knew that this was going to be the future of video production because the interviews I was able to get when filming alone were real and spontaneous and intimate. 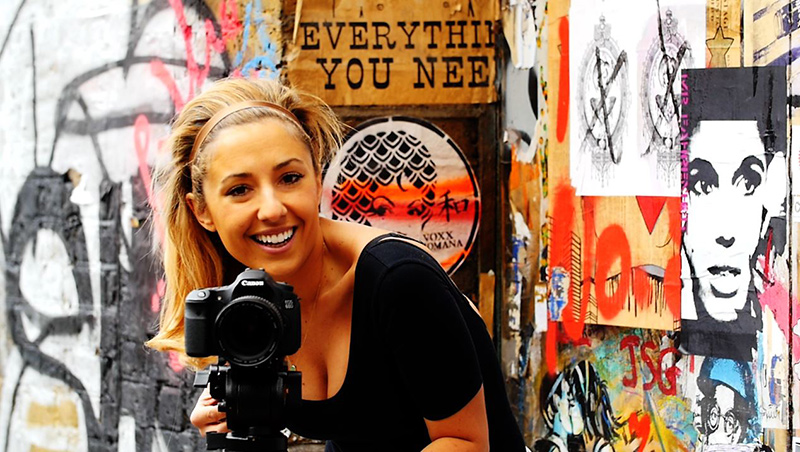 Apart from producing and shooting segments for her travel series, she had to get stuck in to the craft of editing, which has both a creative component and a technical one. Flavell credits her ability to learn editing software to using internet resources while traveling abroad.

I tried Avid but found it wasn’t intuitive and the community around it seemed to be largely made up of people who were afraid of change. I tried Premiere Pro and although it can be daunting to change your editing software, within a day I felt comfortable and then quickly moved on to learn Audition and After Effects.

When everything is available online there is no excuse – even traveling all over the world I can study rotoscoping or colour grading from a video by a 15-year-old in the community or from the free tutorials put out by Adobe.

Having traveled internationally for video projects myself, I was a bit surprised to find out that Flavell truly does work solo. Dealing with all of the gear, responsibilities, yet being able to put together a successful series of shows. I asked outright if she secretly had a crew or support team following her, like many other shows that present themselves as a single person production.

People are used to being lied to in terms of production, we’re used to ‘the magic of television’ – even if the host says she’s all alone there is always someone there for support standing out of frame. It just makes things so much easier when I can really become a part of a foreign culture and as soon as you add even one person traveling with you, suddenly you cut yourself off from that kind of cultural hyper awareness.

I’m a bit of a loner but I do think you become more observant, open to adventure and sensitive to details when you’re filming solo. For those who are all about the gear, I made sure to find out what Flavell is hiding in her bag when traveling, along with what tricks she uses to record voiceovers when a recording studio is not an option.

I bought a Panasonic Lumix GH4 and was so impressed by the crisp image, the amazing size and weight and, of course, the fact that it can shoot in slow motion and in 4k. I immediately bought a second GH4 and jettisoned all Canon gear except my Canon 100mm macro lens, which I use with a Metabones adaptor. I attach a little LED light to my camera and this keeps me super light and nimble. I have just bought a Sony a7s to give me a better option for shooting in low light as this is one of the only drawbacks of the GH4.

If I have to record a voiceover while I’m on the road and can’t get to a recording studio I find the closet or any cupboard of my hotel room, crawl in there and cover my head and recording device with a heavy blanket for extra insulation and, if I don’t suffocate or freak out the room service staff, I get a great makeshift recording booth.

Flavell and I spoke about the “dreamy” lifestyle that so many young photographers and filmmakers yearn to live, but the reality is most don’t know how to produce content at a level that would provide a sustainable income, much less support the ability to travel all of the time. She remarked that the best way to learn is to get out there and produce a lot of content.

I spent every day filming, experimenting, making tons of mistakes, and investing months in projects that never got published or sold anywhere. And I think it’s crucial to consume a myriad of different styles of work across film, television and online so that you can be sure you’re not just imitating your filmmaking idol and truly developing a distinct style of your own.

If you really want to wake up every morning loving what you do then you have to be prepared to wait for it and fill every hour with ways to improve your skills and understanding of the industry. Have a plan, study your market, learn every facet of the industry so that while you’re waiting for your big break, instead of complaining that you can’t find work or aren’t getting recognition, you’re growing as both a creative and a commercial business person. I was rejected repeatedly. I had deals that almost happened and then just dissolved after months of positive feedback. It’s heartbreaking but you can’t let that deter you because if you choose to keep going, rejection can strip you of your ego and make your work infinitely better and more competitive.

Even with a few hit internet TV shows in the bag, Flavell isn’t slowing down. She is using that momentum and continuing to learn more about her craft, while broadening her horizons for a new set of projects down the road.

I want to continue developing my editing proficiency in Premiere Pro and After Effects – and become an expert at flying a drone as aerial footage is an obvious advantage for travel content. I’m currently shooting a series called Hooked Up, for Airbnb which has me in a different country every two weeks and is getting over a million views online per episode. I’ve also started shooting documentaries for Shell in locations like Rio and Africa where they’re helping poor communities with innovative energy projects. Both these projects really fascinate me because they take travel content beyond just tourist stuff and explore themes of cultural tolerance, humanity and the importance of curiosity and dreaming.