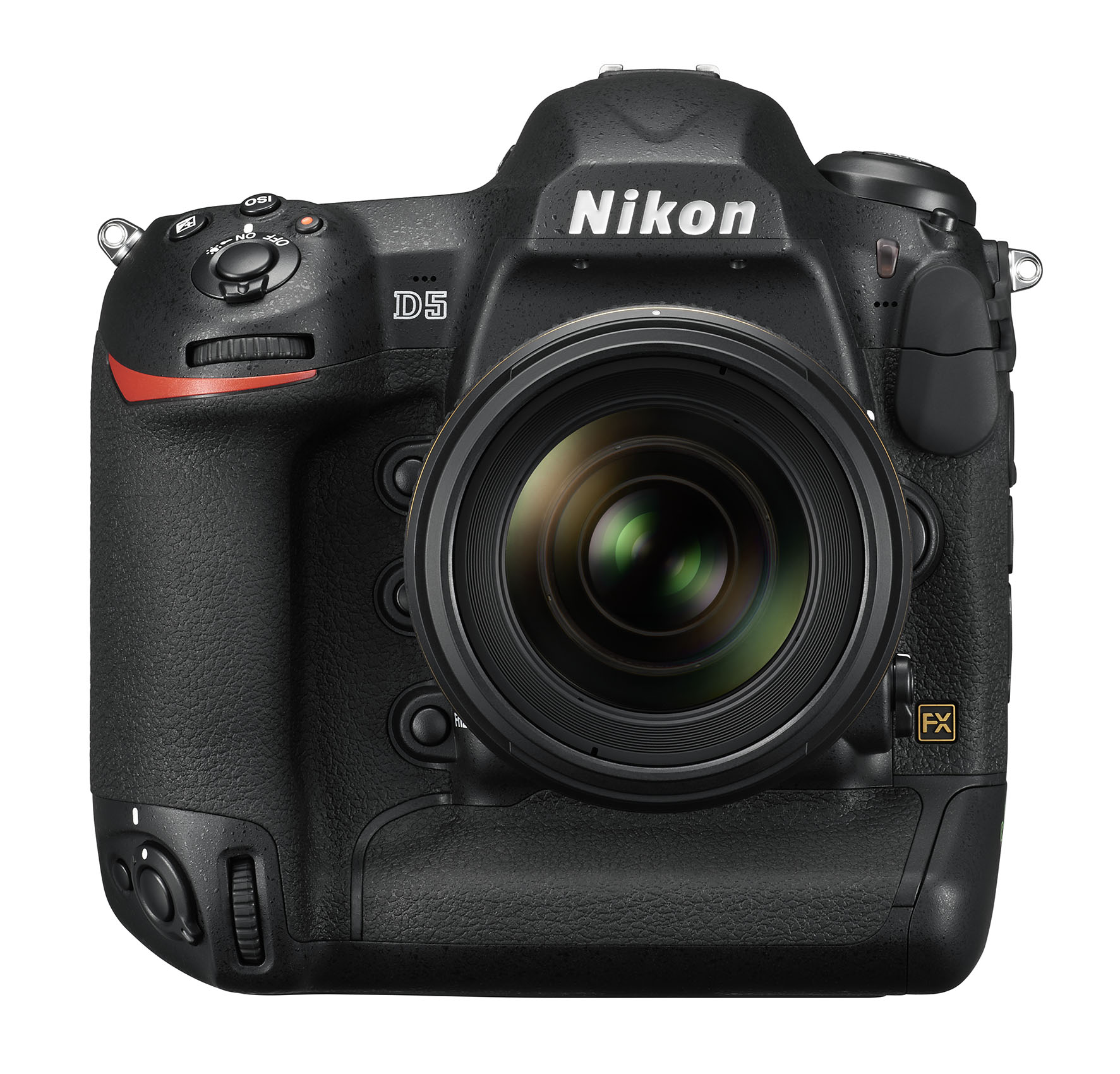 Nikon has officially announced the Nikon D5, the camera they are describing as the one “the industry has been waiting for.” The D5 “represents what we are trying to do for the entire DSLR category.” Their aim was speed, accuracy and image quality, not just a lot of features crammed into one body. During the press conference, Nikon put emphasis why they believe the DSLR is a better system than mirrorless because the action is in sync real time with what you see in the diopter. They also put emphasis on autofocus, and how it is much better on a DSLR. Their words seemed almost directly aimed at Sony, who has been pushing mirrorless for the last few years. 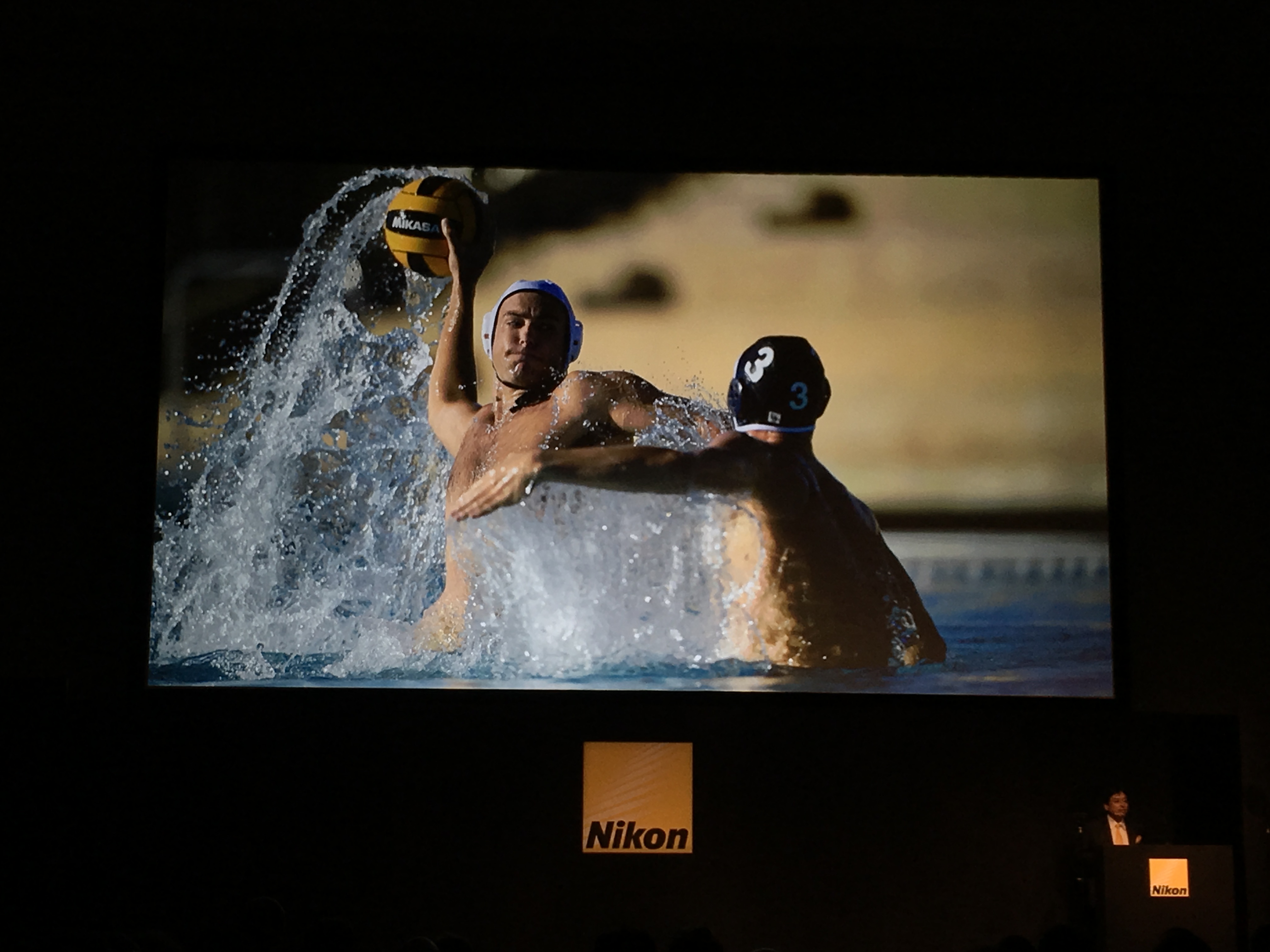 Nikon put their best autofocus tech into the D5, saying that even at 12 frames per second both autofocus accuracy and stability will be at peak performance. The D5’s AF system is extremely reliable and precise regardless of situation and lighting. 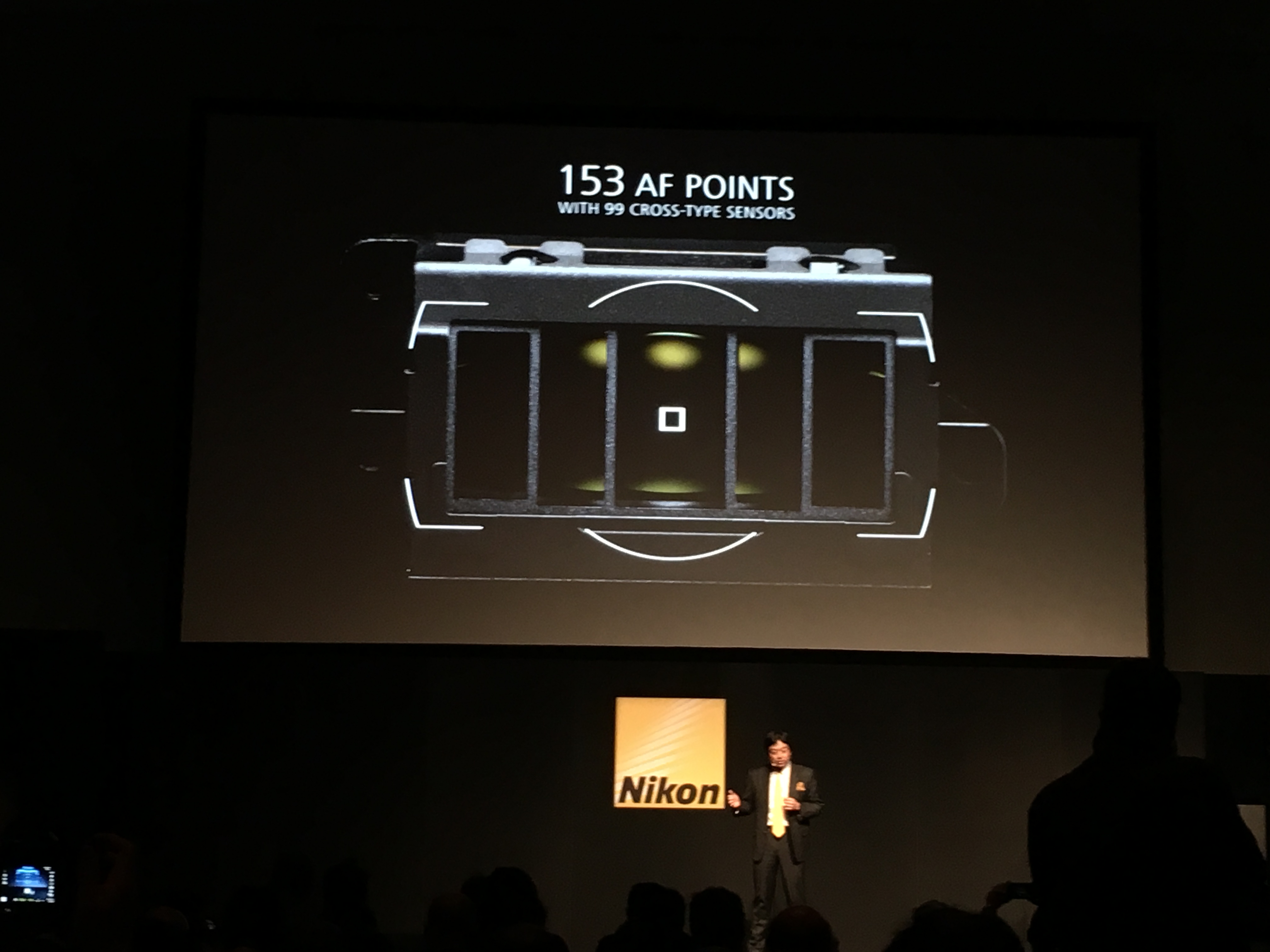 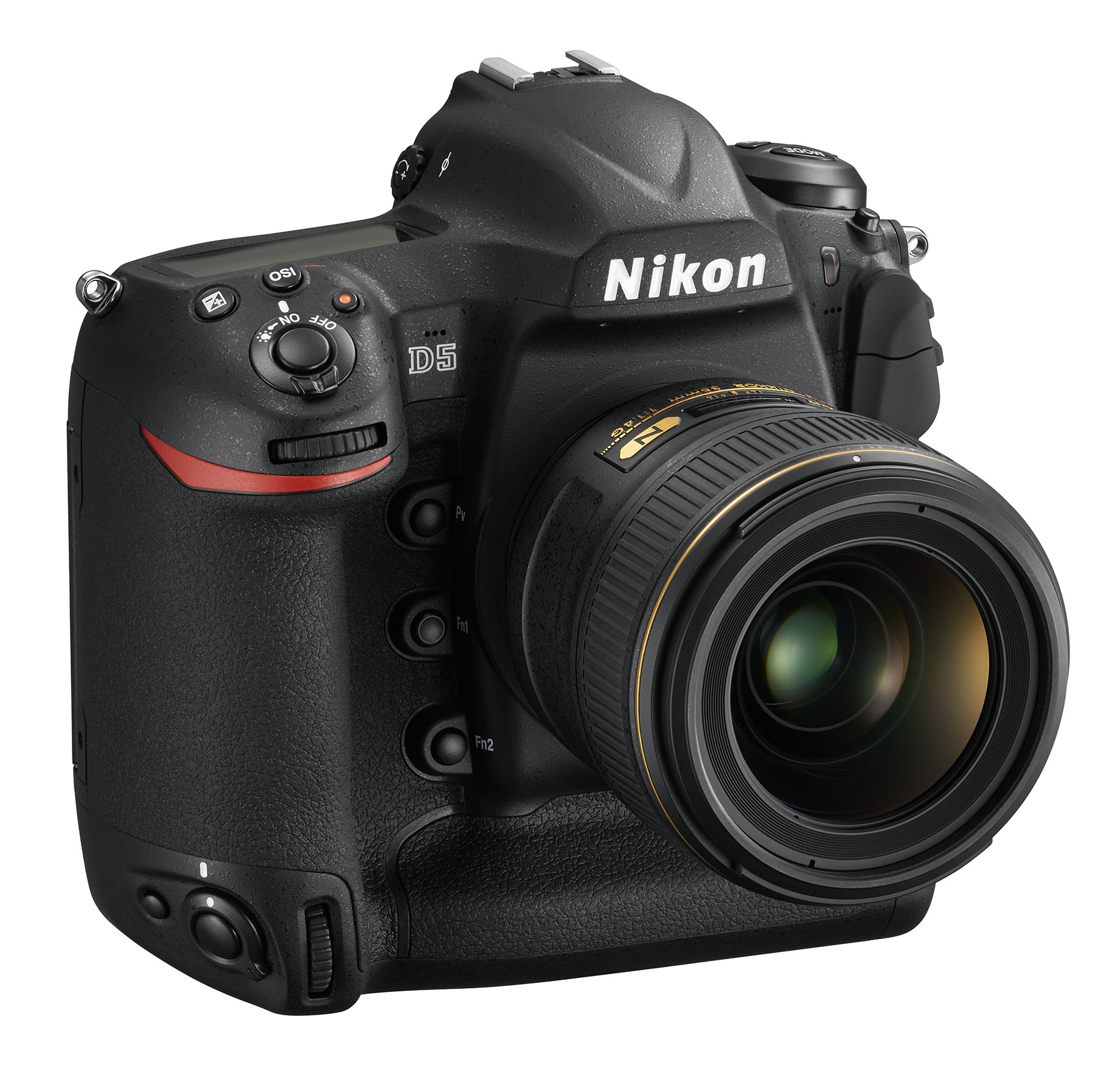 Nikon redesigned the sensor to the 20.8 megapixel FX sensor. It has very good low light performance and is powered by the EXPEED 5. From ISO 100 to 102,400, Nikon says images will be clean and high great color rendition. Nikon says their sensor also will be the best at skin rendition, with natural and authentic skin tones straight out of camera into JPEG. With this, they’re saying the D5 isn’t just a sport’s camera, but for portrait and beauty shooters as well.

· Astounding Low-Light Performance – The Nikon D5 offers an unprecedented native ISO range, from 100 to 102,400, reinforcing the D-series reputation as the leader of low-light image capture. A veritable new world of shooting opportunities awaits, as advancements in noise reduction and processing help capture low-noise images with fantastic fidelity that were previously impossible. The D5 tames the shadows, whether shooting a newlywed couple’s candle-lit first dance or sports with minimal lighting. The D5 also realizes unprecedented image quality in the high-sensitivity range between ISO 3200 and 12800 — the range favored by sports photographers. In addition, the D5 affords the ability to use higher shutter speeds with minimal illumination, letting photographers capture stunning images that are sharper, clearer and more colorful than ever before. As an added benefit, the next generation autofocus system performs in near darkness, acquiring focus in as little as EV-4 illumination. For extreme low-light ability, the ISO range is expandable from 50 (Lo-1) to a staggering ISO 3,280,000 (Hi-5), offering near-night vision capability that’s well beyond the visibility of the human eye. This extreme sensitivity is a benefit to photojournalists as well as for surveillance and security applications, letting users get shots others cannot see without a flash. This vast ISO range is also available to those capturing 4K UHD video, opening up new possibilities for multimedia and spot-news capture.

· Exhilarating Image Quality – The Nikon D5 delivers on the promise of stunning image quality with the adoption of a new, Nikon-developed 20.8-megapixel FX-format CMOS sensor. The camera is designed to achieve the optimized balance between the large full-frame sensor size, resolution and the new EXPEED 5 image processing engine. Users can be confident that images will have enhanced sharpness and clarity, faithful skin tones and the unequaled dynamic range that Nikon pros have come to love. EXPEED 5 also helps to enhance noise reduction, letting photographers take full advantage of the D5’s immense ISO range. When paired with legendary NIKKOR optics, the D5 is truly a tool to help photographers capture the sharpest images possible with astounding clarity and radiant colors.

· Powerful Performance – Nikon’s EXPEED 5 engine also serves to dramatically enhance camera performance, delivering low noise, high-speed image processing and offers the additional processing power needed for 4K UHD video. For professional sports and wildlife photographers, the D5 is capable of capturing images at 12 frames-per-second (fps) with full AE and AF, helping to ensure that the decisive moment is caught in crystal clarity and absolute sharpness. Users can also shoot at up to 14 fps with fixed focus and exposure and the mirror locked up, ideal for remote capture. Because the action won’t take a break, the extended buffer lets users shoot for up to 200 frames of 14-bit lossless RAW/NEF files + JPG fine. The new processor is also 25% more efficient with up to 3780 shots per charge.

· Fast Acquisition, with Precision – An exciting addition to the D5 is an all-new AF system with Nikon’s first dedicated AF processor. The Multi-CAM 20K AF sensor module offers superior AF performance with 153 AF points, including 99 cross-type sensors – triple the AF points from Nikon’s previous flagship, the D4S. Of these 153 points, 55 AF points/35 cross-type points are selectable by photographers to quickly and easily frame any shot. The system is configurable in 153, 72 and 25-point coverage when used with Continuous AF, allowing for stellar AF tracking performance of even the most rapidly moving subjects throughout the frame. Fifteen of the AF points are also functional up to f/8, further aiding those who require extreme telephoto capabilities, including wildlife photographers. This all-new AF system is coupled with a new 180K pixel RGB metering system and Advanced Scene Recognition System, helping to achieve optimally balanced exposures and accurate white balance in even the most challenging light.

· Rugged Reliability and Unsurpassed Usability – Downtime is never an option, so professionals need a camera that is going to be reliable and augment a demanding workflow. The Nikon D5 delivers with rugged construction and robust weather sealing, coupled with a familiar yet enhanced Nikon interface. A new 3.2” 2359K dot XGA LCD adds touchscreen functionality, allowing the user to easily pinch, zoom, swipe and scrub in playback, and also enter text faster than ever before. Being the champion of low-light, it is only natural that additional buttons and dials illuminate for enhanced visibility, while two additional Function buttons have been added for increased customization. The camera also features a Quick Release Mode setting for rapid access to release mode settings. Additionally, a new shutter and mirror sequencing mechanism nearly eliminates blackout time and mirror slap for bright, consistent views during high-speed shooting– realizing truly confident tracking of fast, erratically moving subjects that were previously difficult to achieve. The D5’s shutter itself is tested to 400K actuations for maximum durability. When paired with the WR-R10 wireless remote controller (transceiver) and WR-A10 Wireless Remote Adapter, the D5 is also able to interface with Nikon’s newest Speedlight, the RF controlled SB-5000, for new possibilities in lighting control. 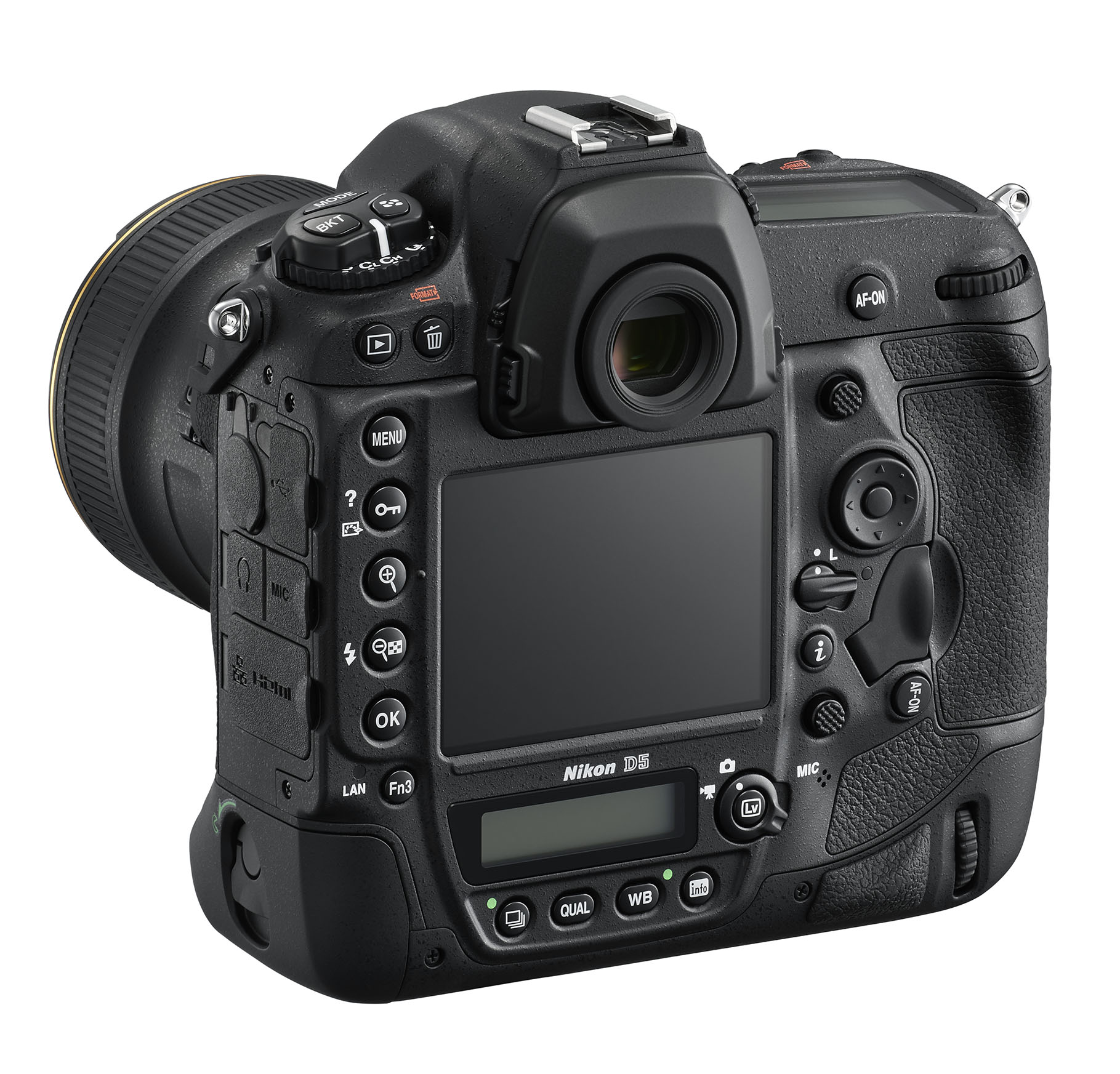 · Rapid and Flexible Workflow – Further enhancing speed, the D5 is able to utilize the superior read and write speed of XQD memory cards, which are up to 35% faster than CF cards. To appeal to a wide variety of photographers, the D5 will be available in two versions; with either dual XQD card slots or with dual CF card capability. For maximum efficiency the camera is also capable of shooting smaller RAW Size S or M file types (12-bit, uncompressed), for greater flexibility when transferring batches of files from the field, while retaining image integrity. Photographers can also use the built in 1000 Base-T 400MBps Ethernet connection for image transfer, with speeds up to 1.5x faster than D4S.

· Multimedia Powerhouse with 4K/UHD Video – The Nikon D5 is the first Nikon DSLR capable of capturing 4K UHD video (3840×2160 at 30p), letting users create stunning ultra-high definition video with beautiful clarity and color. Multimedia content creators can also use the D5 to create 4K time-lapse videos in-camera using the Time-lapse Movie function, and can create 8-megapixel still images from frame grabs. A great addition to any production environment, the D5 includes all of the most popular pro-level features of the Nikon D810, including Full HD 1080p video at a variety of frame rates, uncompressed HDMI out, simultaneous live view and headphone/microphone connections. Additionally, the D5 adds a feature to smooth exposure transitions using the Auto ISO function as well as exposure compensation to create natural-looking exposure transitions in video.