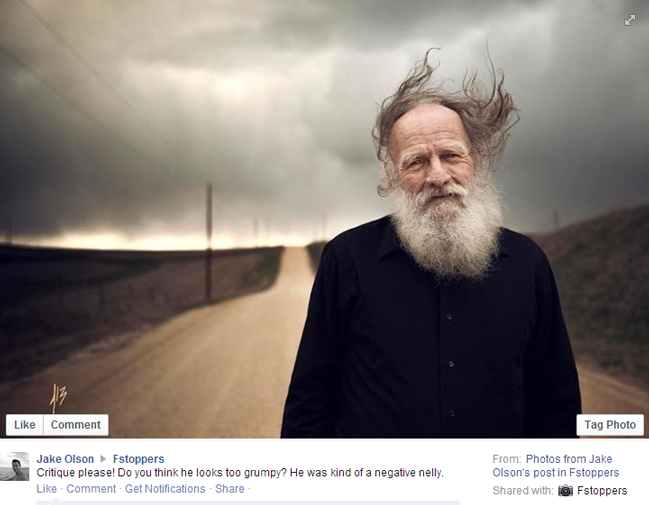 If you keep one ear to the ground in the photography world, you have no doubt seen a particular Facebook post that “famous” photographer Jake Olson posted a couple days ago. You know, a post about a car that culminated in him encouraging one of the commentors to commit suicide? Yeah, that one. The thing is, this isn’t particularly new for Jake. He’s been saying things like this for years, years now, folks. So if you’re a fan of Jake, are considering purchasing something he’s made, or if you just like the idea of watching a dumpster fire, I’m here to show you how deep the Jake Olson rabbit hole goes.

Firstly, for those who have not yet seen it, here is the Facebook post that is garnering so much attention:

So… what is exactly going on here? Well, besides insulting Ashley (who I am assuming is someone in his close personal circle? Girlfriend? Wife? I don’t know, it doesn’t really matter), admitting he paid $190,000 for an SUV (you can have money, but that doesn’t mean you have to spend it wisely apparently), and I think he’s attempting to brag at having money to spend (this is unconfirmed, but highly likely based on his past), we have a guy who seems to enjoy 1) baiting and 2) mercilessly attacking his commenters. Jake is quick to point out his Wikipedia page as proof that he is famous and successful (which, oddly, I don’t think anyone was questioning in the first place), and then tells the commenter to “give suicide some thought.”

Apparently wishing death on someone is finally the straw the broke the camel’s back, as finally the photo community is taking notice and fighting back. But there is so much more that Jake has said in the past that, for some reason, he’s been able to “rise above” so to speak. What follows is a wonderful list that could fall under “how to not be a well-loved person” or “rules to follow to assure your photography business struggles,” but in this case it’s photography business sins Jake Olson has committed over the years.

Sin #1: Being Totally Unprofessional to Clients

Why do you want to be professional to clients? Well, because you’re a professional right? Like, that’s part of the question. We generally want to behave this way because we value business, our clients, and the success of not only ourselves, but of our clients. It’s why bad service at restaurants is a leading sinker of that kind of business, or why we won’t go back to a hairdresser, masseuse, or vendor of really just about anything if the service is horrendous. Being professional and providing good service is a hallmark of a successful business. However, Jake happens to be so successful, and so rich, that he doesn’t have to abide by this rule. Let’s watch:

(Note: this email was uploaded to the public website Imgur.com specifically as a reference piece by a Redditor to show how Jake treats customers) 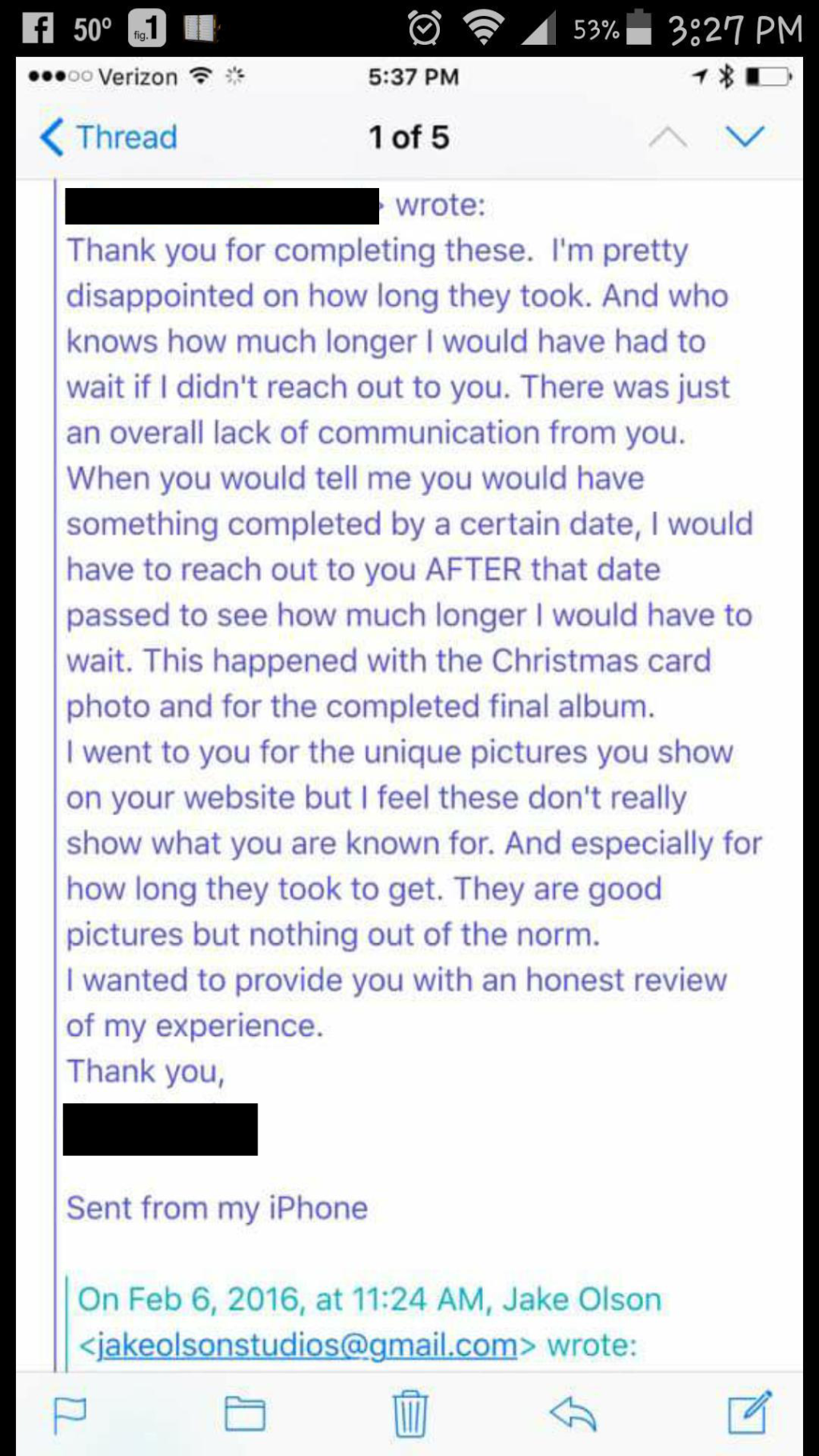 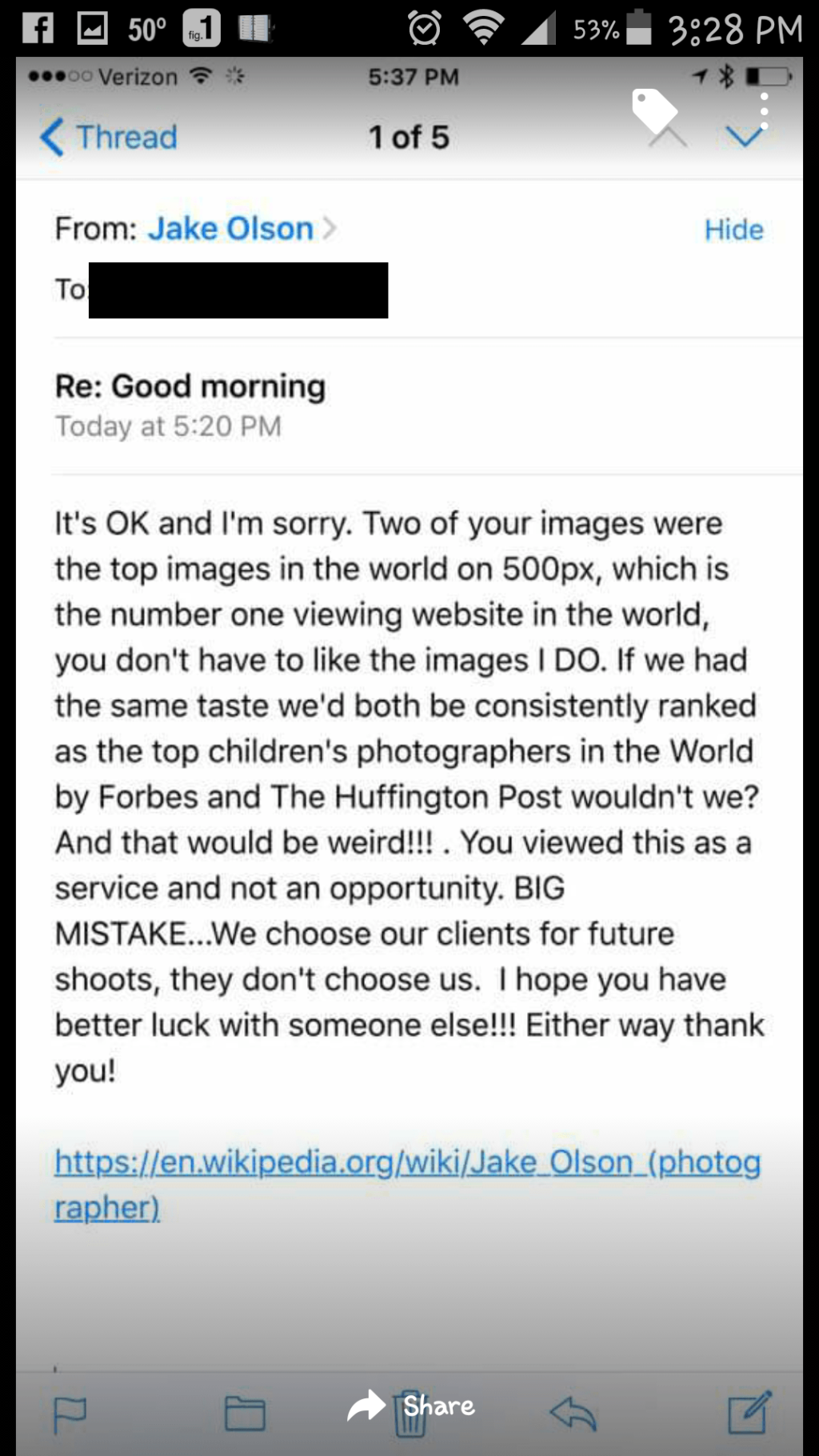 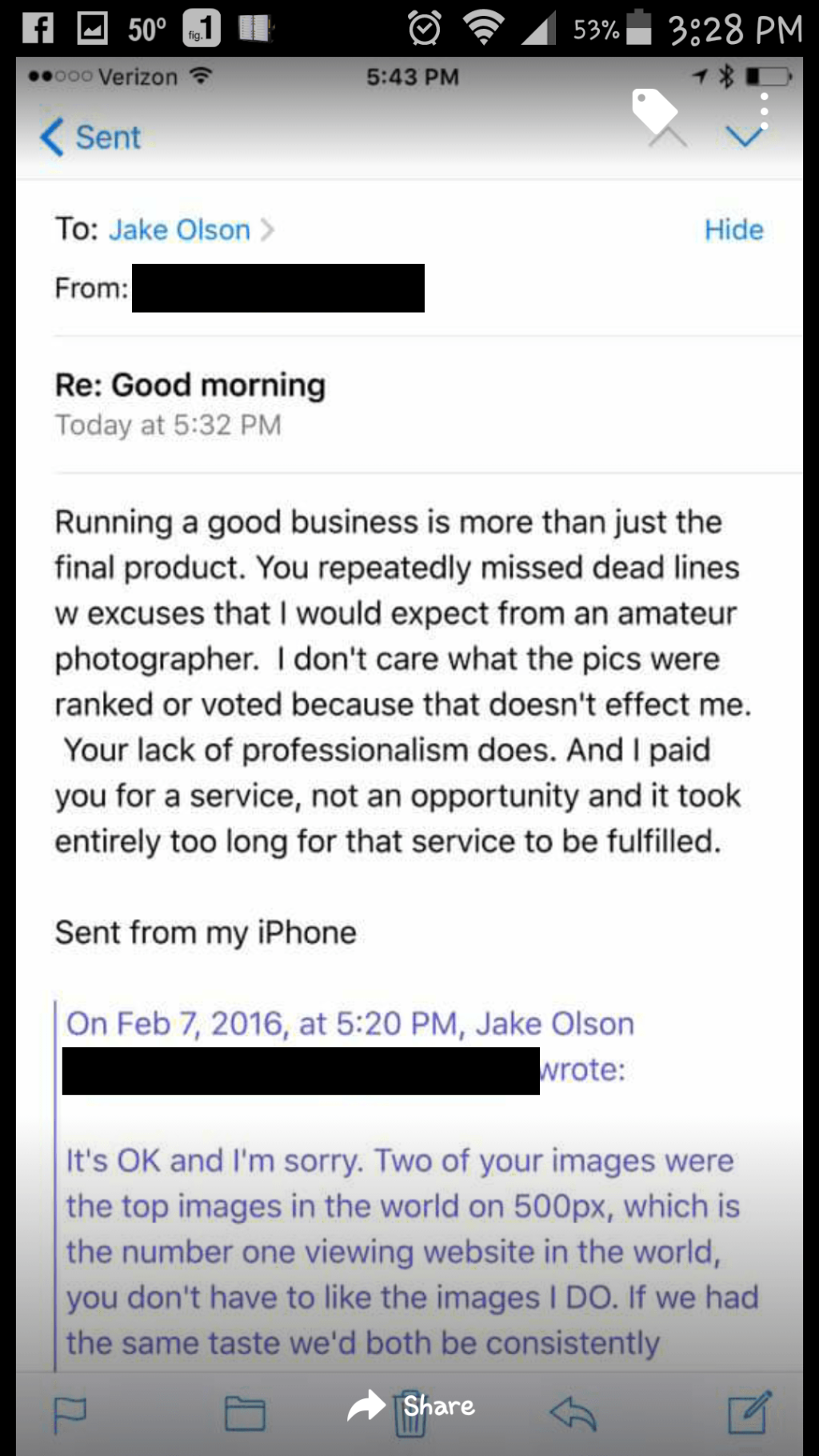 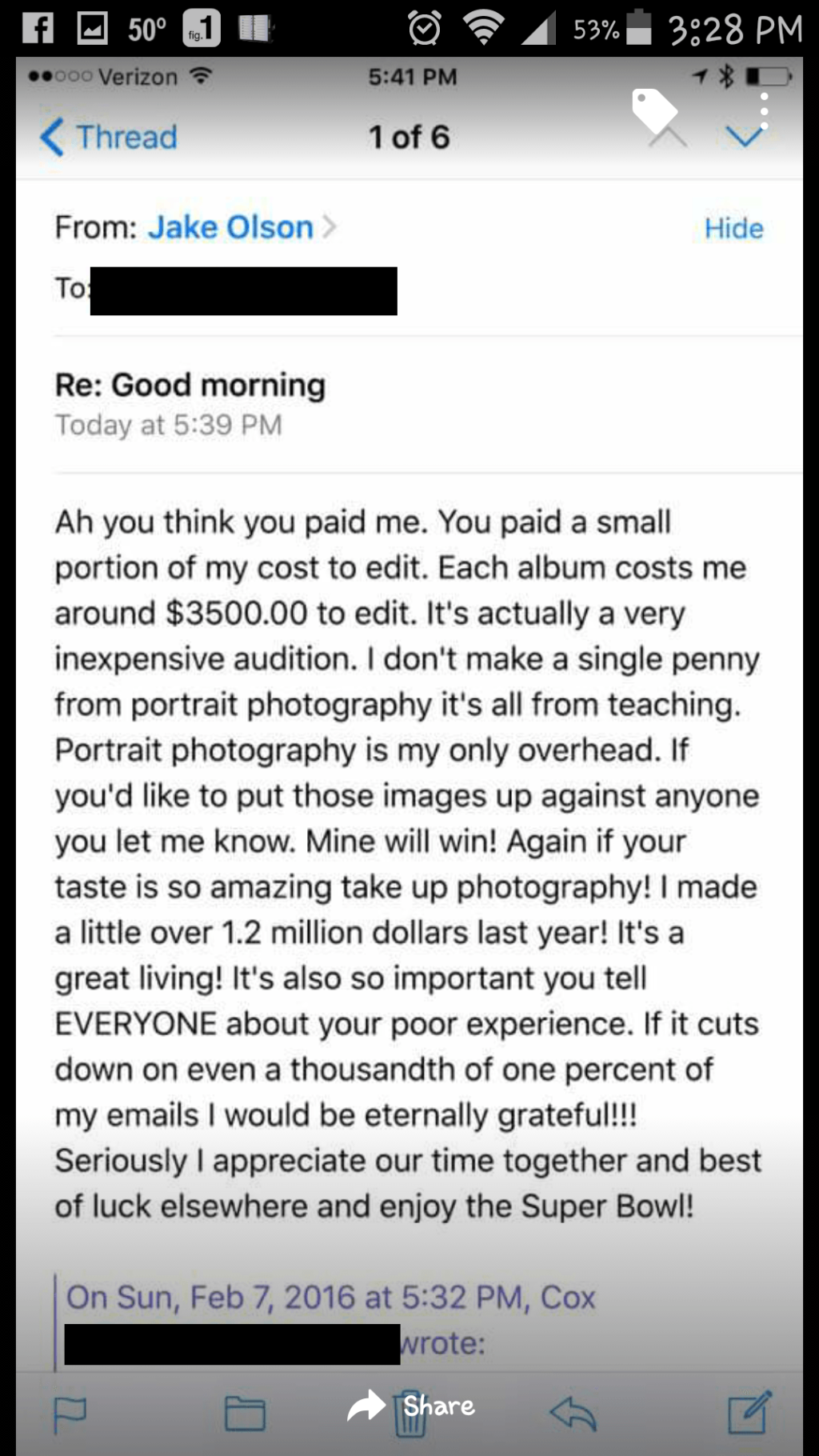 SUMMARY: Jake Olson completed a portrait session with this client who we will call “Jen” based on her email. Jen appears to have legitimate complaints: she didn’t really like the photos Jake took, and Jake seemed to take far too long to send her the finished images. These are two rather egregious complaints to levy against a photographer, and any self-respecting photographer who owned his own business would do everything he could to make it right, because that’s what business people do.

That’s not what Jake Olson does.

Instead, Jake makes excuses as to why they were late (though we should give him some credit, he did slide a half-assed apology in there), again brings up how amazing and famous he is (oh look, the Wikipedia page again), and demeans and basically sneers at the client who has a real point: she does not care about his fame, his popularity or his money. She cares about getting a product for which she paid. Not too much to ask, especially since she’s a client and she did give him money. His reasoning and final answer are so absurd that I’m at a loss, so I’ll let you draw your own conclusions there.

I believe we just saw Manny Paquiao lose his Nike sponsorship due pretty much entirely to comments like these:

Just because you’re famous doesn’t give you free reign to be a bigot. End of story.

#3: Humiliating a fan in front of clients

Despite what he, and maybe you, might think, it does matter how you appear in front of clients. If you do something outlandish and cruel, clients will put on a good face, but they will talk about you afterwards. How do I know? Because I’ve been on both sides of the table when it comes to negotiating large contracts with photographers. I’ve seen truly ridiculous stuff happen when a photographer has an overinflated sense of self worth, and I’ve seen that ego destroy more photographers than I care to count.

If what Jake Olson says happened in the comments below actually did happen, I assure you that the client in the room was forming some very solid opinions about Jake’s person, despite how they might have appeared to Jake at the time.

And what if the client was just as amused as Jake apparently is here? It still doesn’t excuse his behavior and kind of dips into Sin #1. Jake truly believes, based on his last comment, that because he is famous, he can be an asshole to anyone for any reason. Again, this is a guy who sells product to you, the burgeoning photographer. That’s just a reminder as to where your money is going.

I mean… I get defending yourself that you didn’t copy someone, but this is completely uncalled for.

To me, this is actually the worst sin out of all of them. Before this, there was some kind of catalyst that made him respond in the ways he did. Someone didn’t like a photo, someone accused him of copying someone else, a client was unhappy… they all start outside of Jake Olson and his responses are just the problem. Here, this one, this is where he starts a fight with the explicit desire to bait, demean, and denigrate another member of the photo community. This is a conversation from a Facebook group from two years ago, which shows how long Jake has been doing this. Jake was kicked out of this Facebook group for doing this, and he did not take that well. At any rate, here is what he did:

SUMMARY: Jake posted a photo that he himself knows is quite good and has been purchased for a book cover (and yes, I totally agree it’s a pretty darn good photo). He posted the photo in a group that was specifically set up to help photographers improve, therefore critiques were commonplace and expected. Not only that, he asked for a critique.

But Jake didn’t post his photo to get critiques or help people improve. He posted it hoping someone would critique it so that he could publicly attack and demean them.

That statement above is not speculation: it’s fact. Looking at how the conversations unfolded with users and his response with a new post at the end are prime examples of how he planned to amuse himself for the evening by insulting, attacking and being a generally unpleasant person to users of a group who earnestly want to improve as photographers.

Jake makes educational material. Jake knows that not everyone is a good photographer. Jake is aiming to sell his product specifically to the people he’s attacking. That is some backwards marketing right there.

Above is the top of Jake Olson’s Wikipedia page, the page that he more than likely submitted himself. (How do I know this? Well, per Wikipedia, the page is an “Apparent autobiographical advertisement page created and edited by subject.”) You know, the one he regularly rubs in the faces of anyone and everyone, and even made his Facebook background image? Yeah he actually did that: 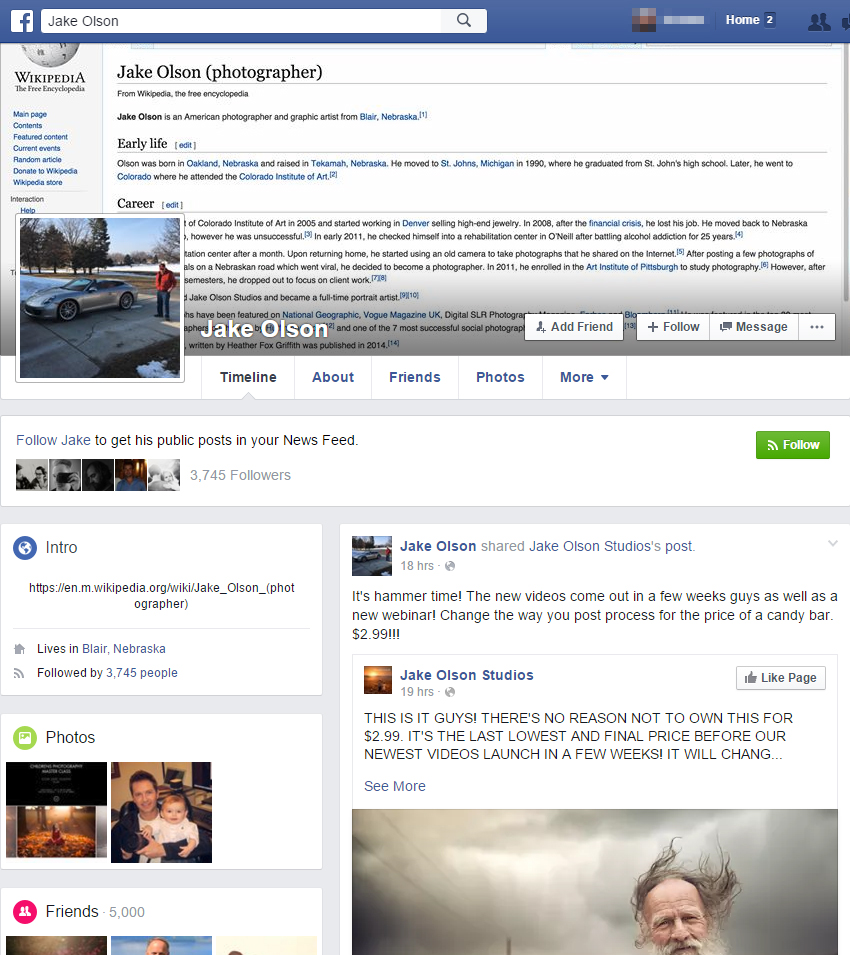 Anyway, you’ll notice that statement at the top of the page by Wikipedia: “Article being considered for deletion.” The reason for this is so juicily, tastily ironic that I could spread it on my morning toast:

“Appears to not be notable.”

Jake Olson, the “famous” photographer who has repeatedly and regularly stated how “famous” and well known he is, is not “famous” enough to have a Wikipedia page.

So by Jake’s own definition, being famous means he can be an asshole to anyone he wants. Except Jake Olson is not famous, he’s just mean.

I don’t know if he cares, but his attitude has not gone unnoticed (I think in Sin #1 he expressly states he wants bad reviews though, so maybe he is getting what he wants?). If you look here, you can see page upon page of bad reviews.

What are your thoughts, folks? His photos are pretty good, that much I think we can for the most part agree on, but does that excuse how he speaks to other people? We would love to hear your opinions in the comments below.