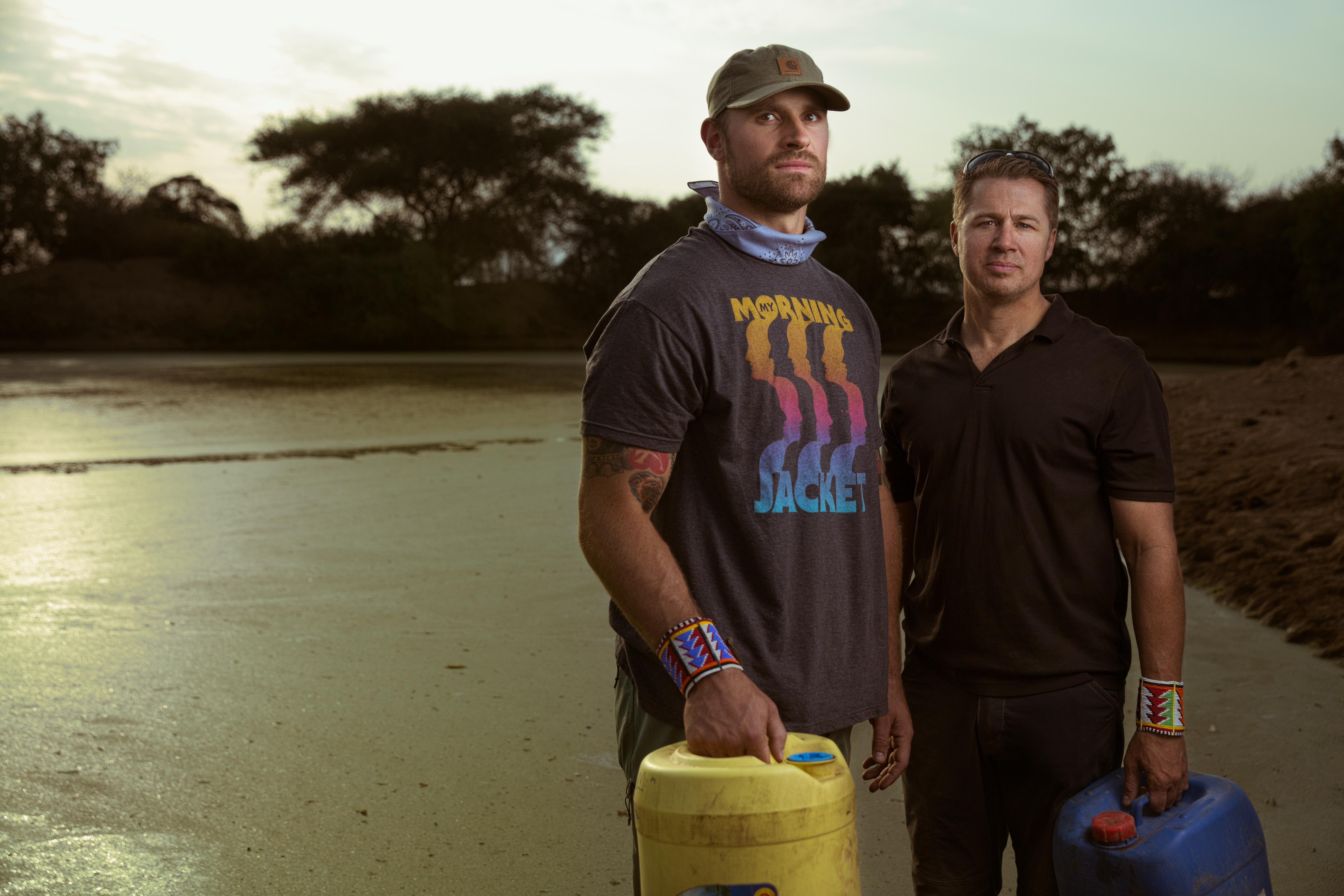 Roads allow us to travel to destinations far and wide. Sometimes, roads are dangerous and sometimes they are smooth. But, the moment you veer off the road into vast territory our senses spike on red alert. I knew we were traveling to a remote Masai village in Tanzania, but I wasn’t sure how remote. When our LandRover took a strong left into the unmarked African bush off the main road, my mind went into overdrive. The green mountainous landscape suddenly transformed into a desert-like tundra and a strong breath of wind began to shudder the truck. After an hour of treacherous trekking we arrived to the Masai village: a slew of bearish huts fabricated from dried cow-dung and branches surrounded by a perimeter of a thorn bushes. What seemed like hundreds of villagers draped in checked red-black flannel robes fighting the storm of dust, began to rush the trucks and greet the caravan. 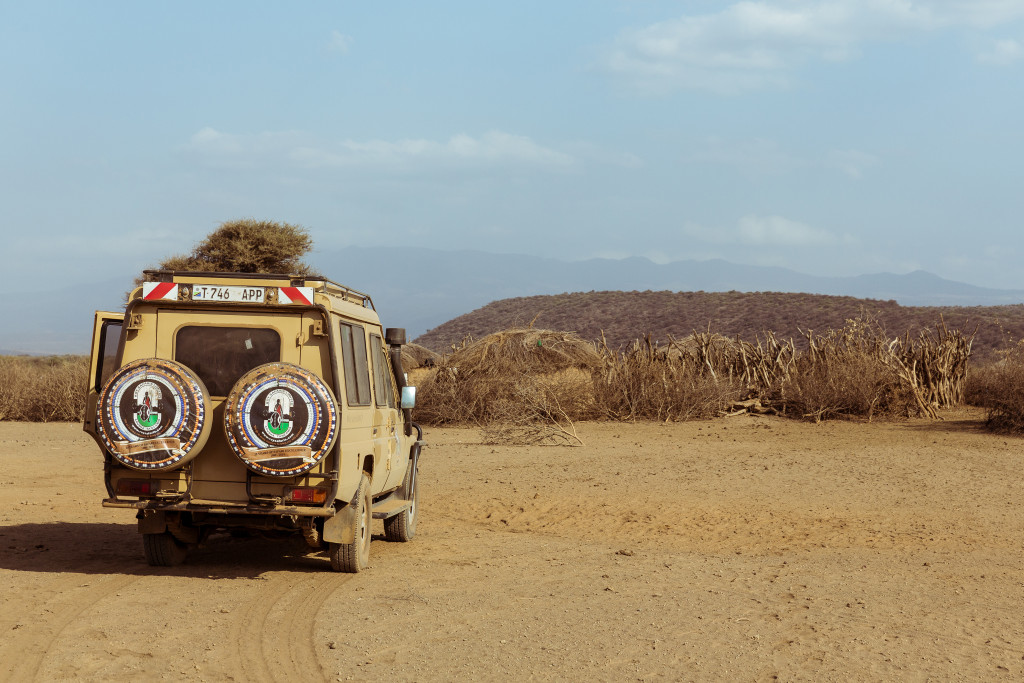 In early 2015, I was approached by Nadus Films to head over to Tanzania, Africa to capture content and a short promotional documentary. The project: Waterboys Initiative, a non-profit foundation that contracts celebrities and athletes to fund water relief wells in rural villages all over the country of Tanzania. Waterboys Initiative was founded by Chris Long of the St. Louis Rams, along with Doug Pitt (Goodwill Ambassador Of Tanzania) and John Bongiorno (President, WorldServe). Our short film and photography was set to be pushed through the networks NFL and various other major contributors, including ESPN and the St. Louis Rams. 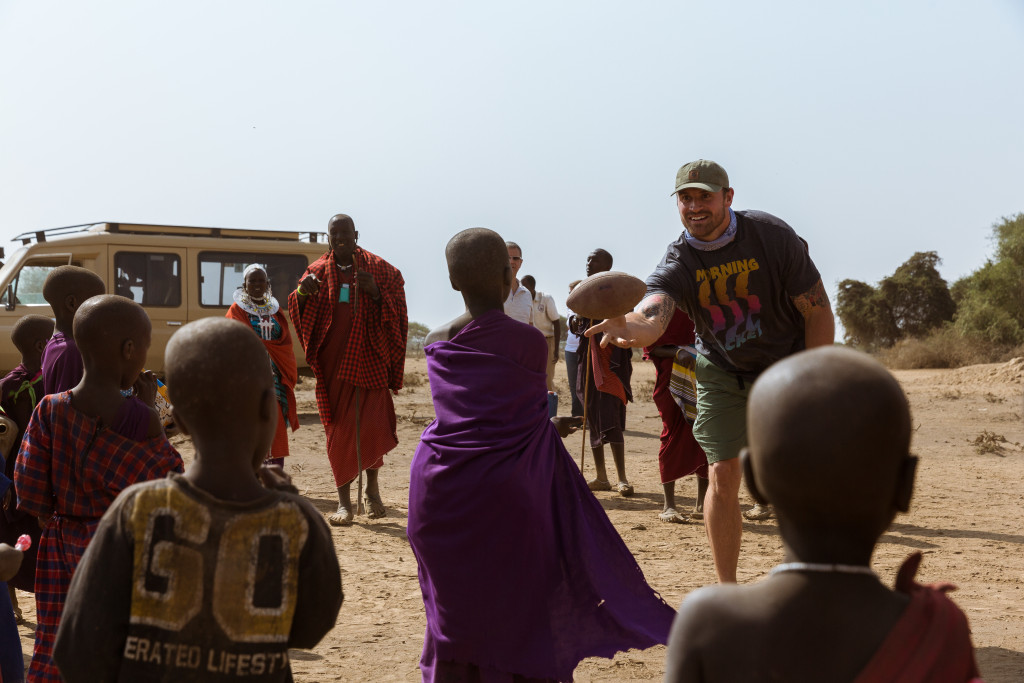 Upon arrival in the Masai village our first mission was to start shooting, shoot everything. Our focus was the interaction of Chris Long and Doug Pitt with the Masai villagers as well as the conditions and landscape of their home. Much of it was staged for the best shots, other times it was completely improvised. My job was to capture both behind-the-scenes as well journalistic coverage of the adventure, but this was also scheduled to be the day in which I had the opportunity to photograph Chris Long and Doug Pitt in a portrait setting with artificial lighting. 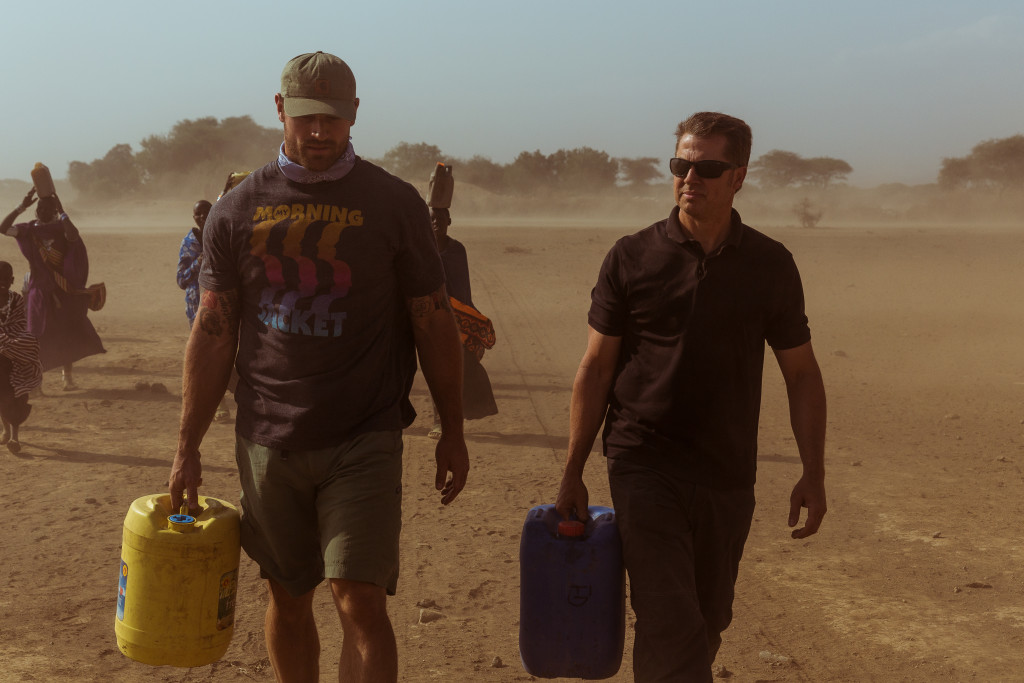 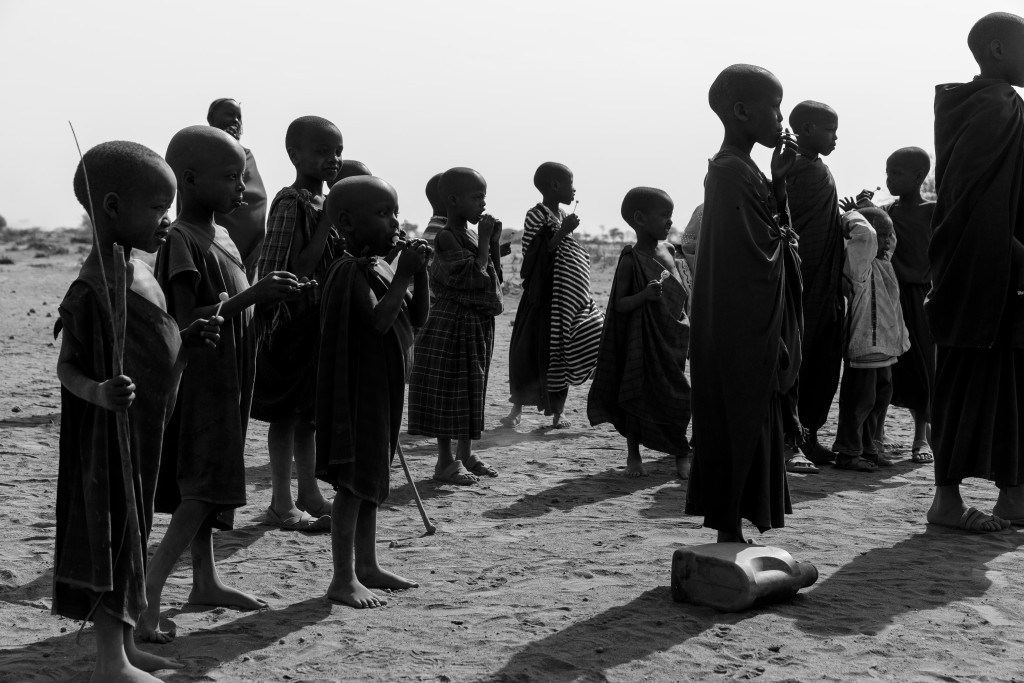 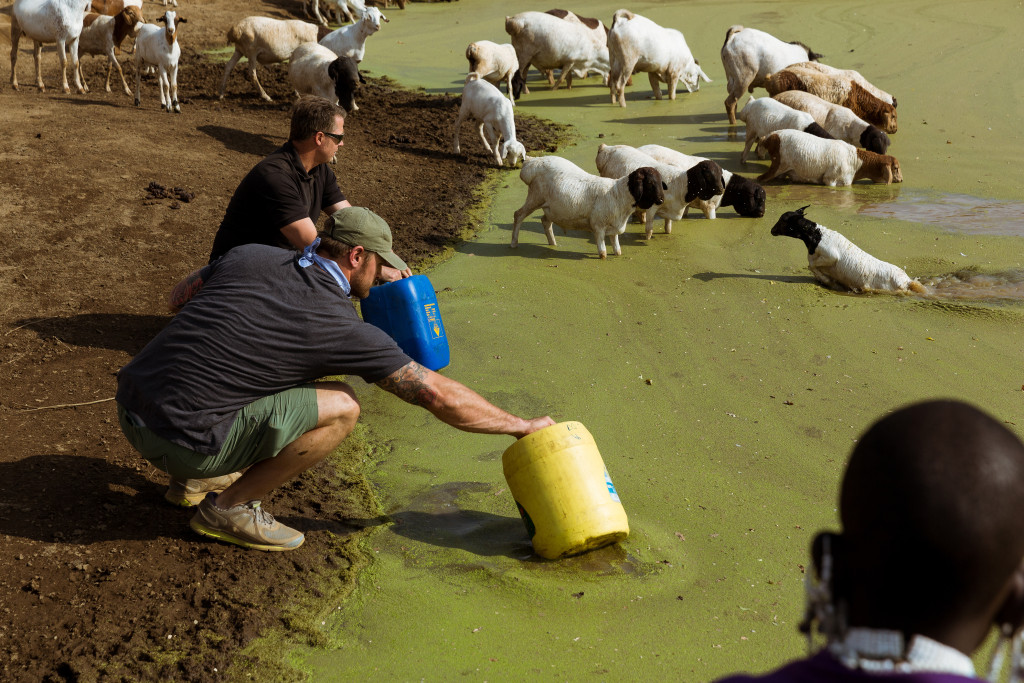 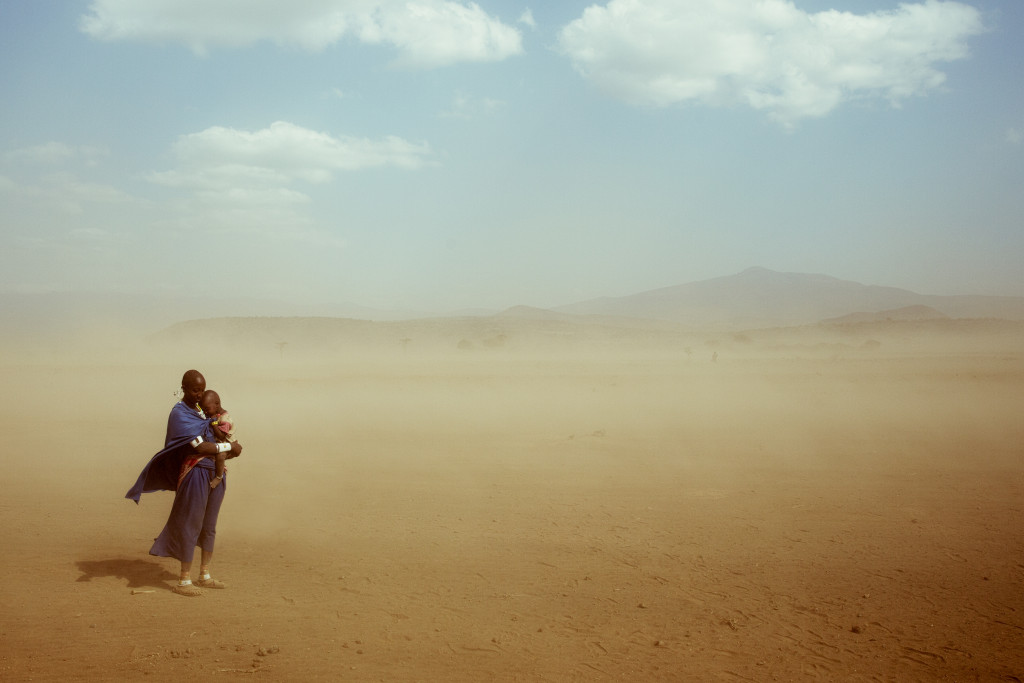 A couple hours passed and a breath of anxiety began to set in. We had to leave the village before sunset, as traveling at night was dangerous due to wildlife, theft and poor roads. As the sun began to lock into its low-position, the chance of nailing a portrait of these celebrities began to dwindle. We just wouldn’t have the time.
At that moment, I heard a faint voice shout, “You’re up.”

Looking to the sun, I only had a few minutes to nail the shots I had envisioned from the start. Instantly, I turned to a Maasi Warrior who happened to speak very broken english and asked him to be my assistant. His face lit up like a child and his shiny white teeth shined through his dark, scarred and rugged complexion. I handed him a 3 Legged Thing Boom Pole, the Profoto B2 Kit and a 46” Photek Softlighter. I threw my camera kit over my shoulder and we set off to the point of location I had scouted just an hour earlier. 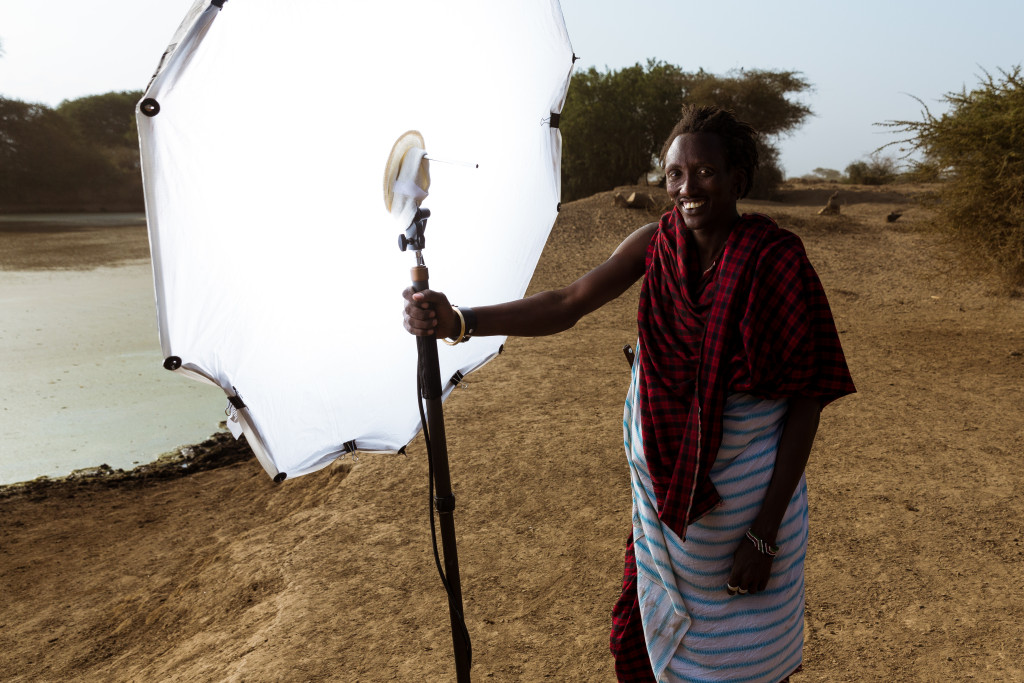 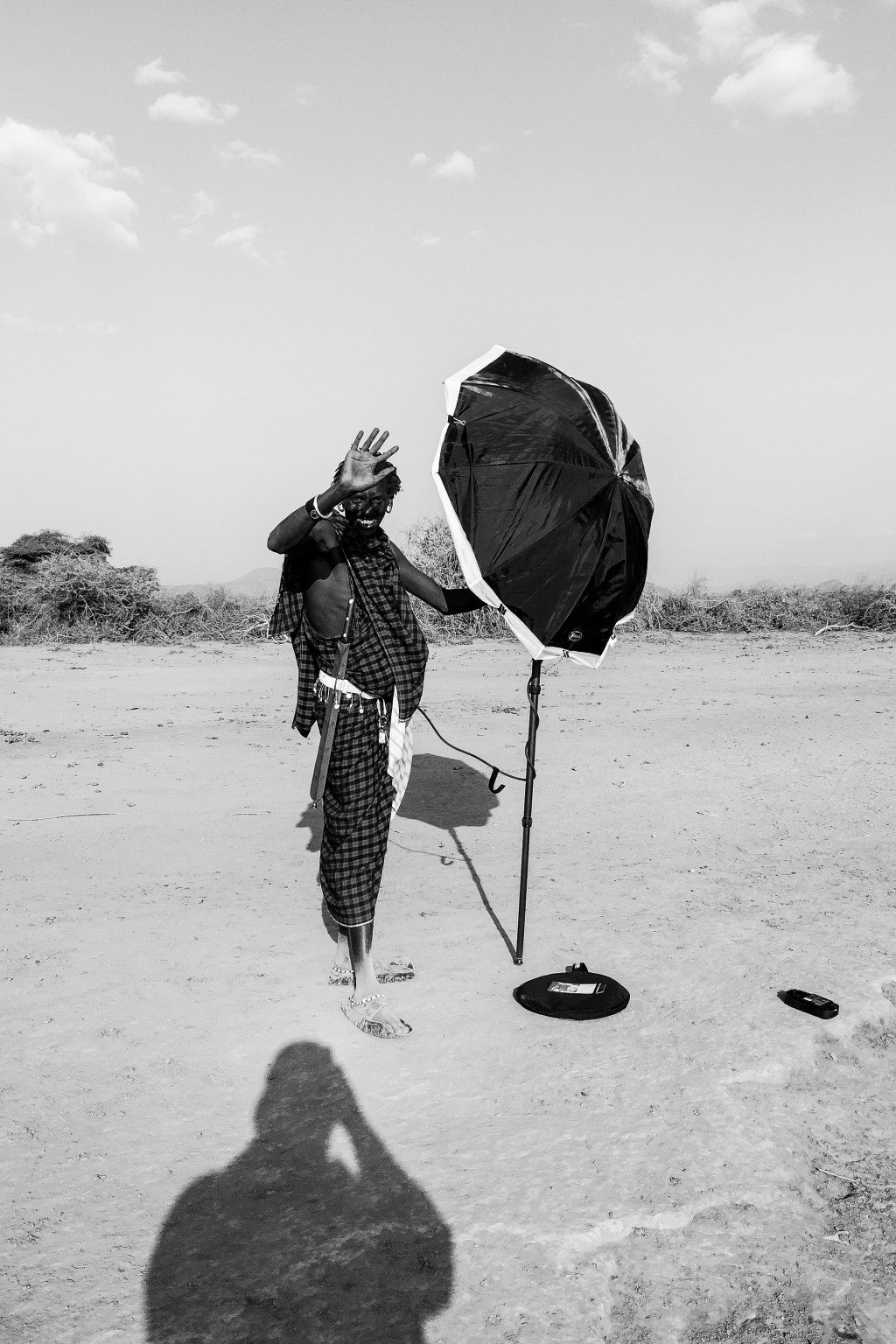 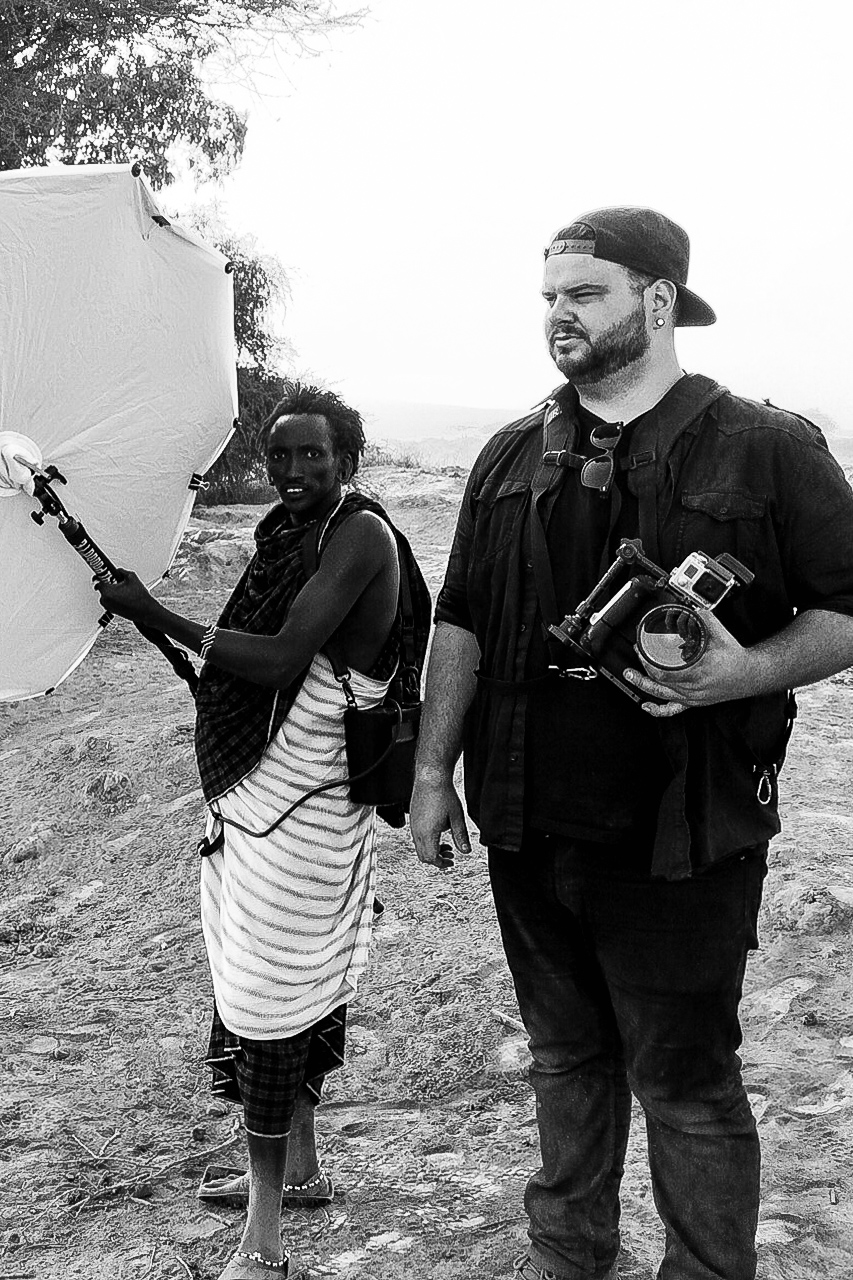 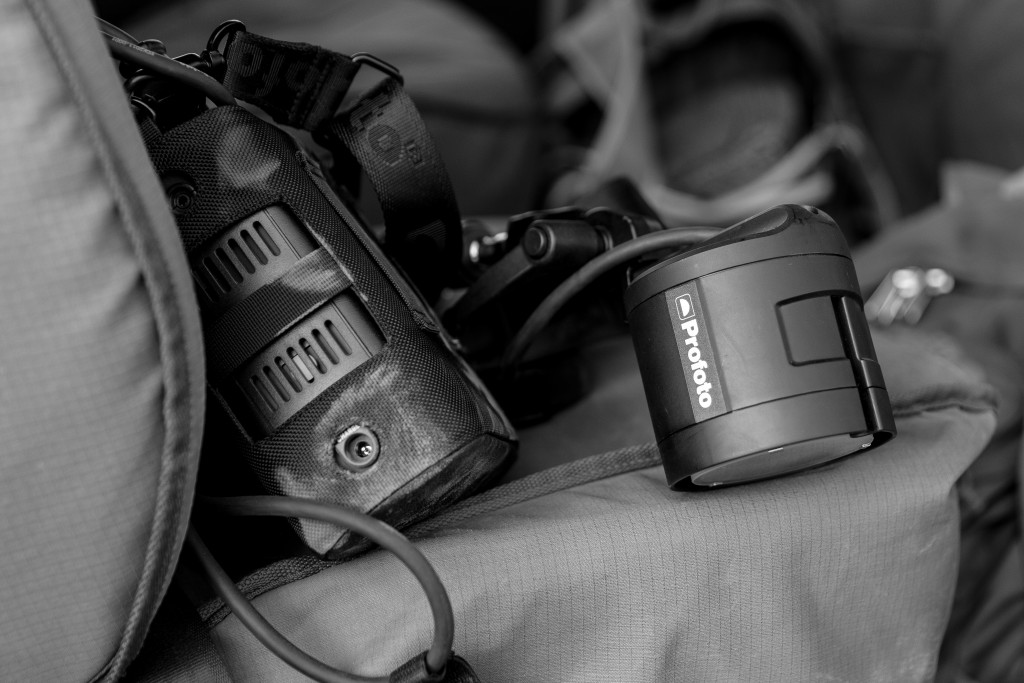 I gave my Maasi assistant a fast five minute run down of his role in the most basic way possible. I directed him to hold the light in front of the subject toward the ground. I used more hand gestures and body language direction then words. Shockingly, he caught on very quickly. As a short test, we snapped a portrait of a woman loading water onto a donkey. She wasn’t happy, but luckily my Maasi assistant demanded that she cooperate. I still am not sure what he said to her. 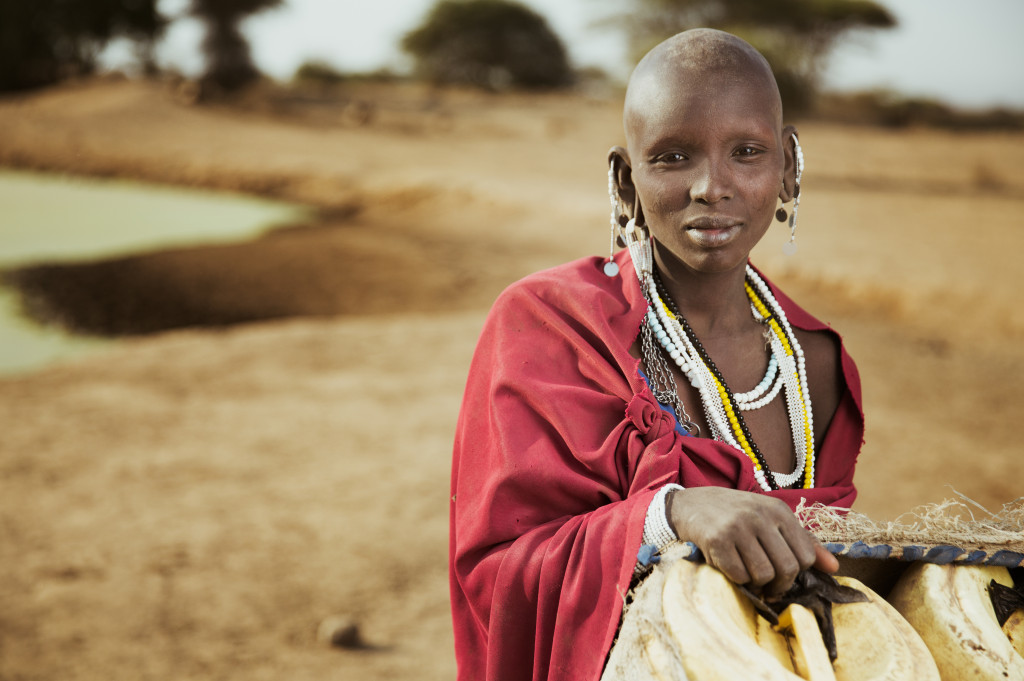 At that moment, Chris Long and a crew of ten pushed through the thorn bush perimeter ready for the session. My instincts and intuition kicked into gear and I immediately directed Chris to a shady spot on high ground overlooking the village. I asked my assistant to direct a few of the villagers to stand and look busy in the background. I snapped two-three test shots and then we got to work. We photographed both Chris and Doug Pitt in various positions, poses and staging. All the time, I heard a few voices in the background persisting that we leave immediately. The sun was low, very low. I wasn’t happy and needed more options. 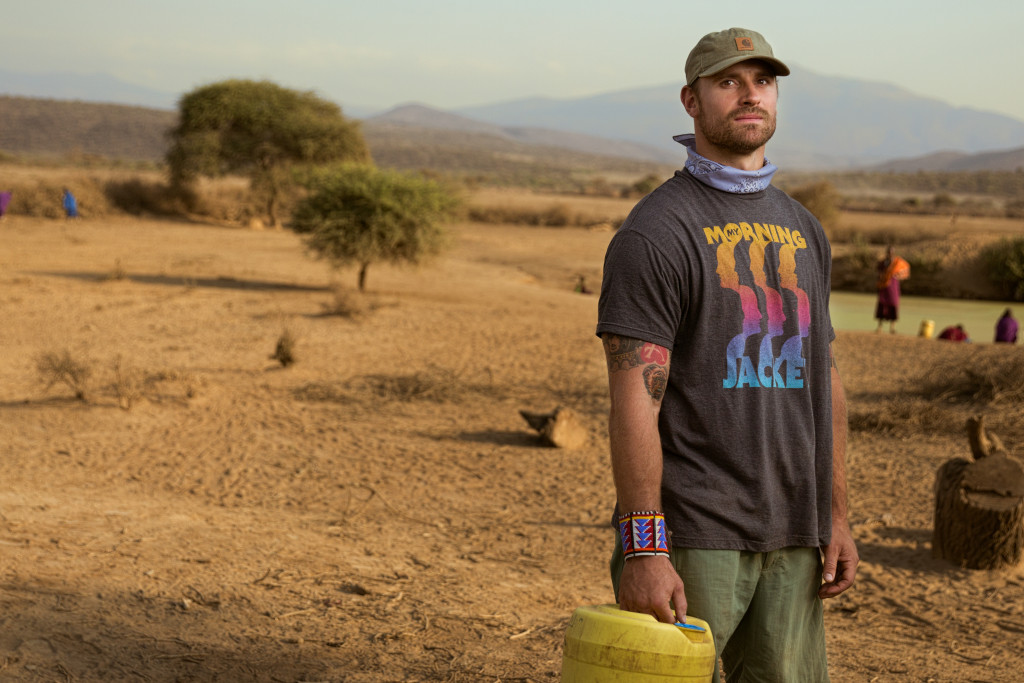 Despite the pressure, I directed Chris and Doug to one more location further down the hill towards the green, stagnant watering hole. We staged once again, I fired off just ten frames and then called it. Without a second thought, the crew hightailed it back to the trucks. 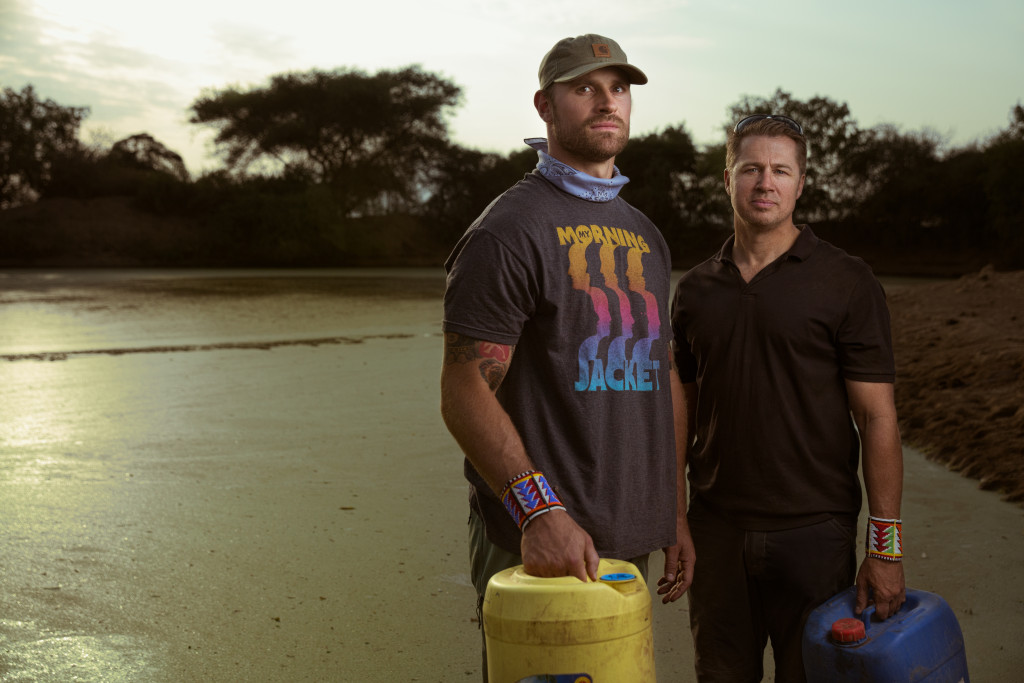 During our final farewell, I was able to sneak in a couple more portraits of the Maasi, including the village elder and a young warrior. The sun had practically set and without packing I threw my gear into the truck. I was the last the close the door and this entire period of time was under 20 minutes from start to finish. 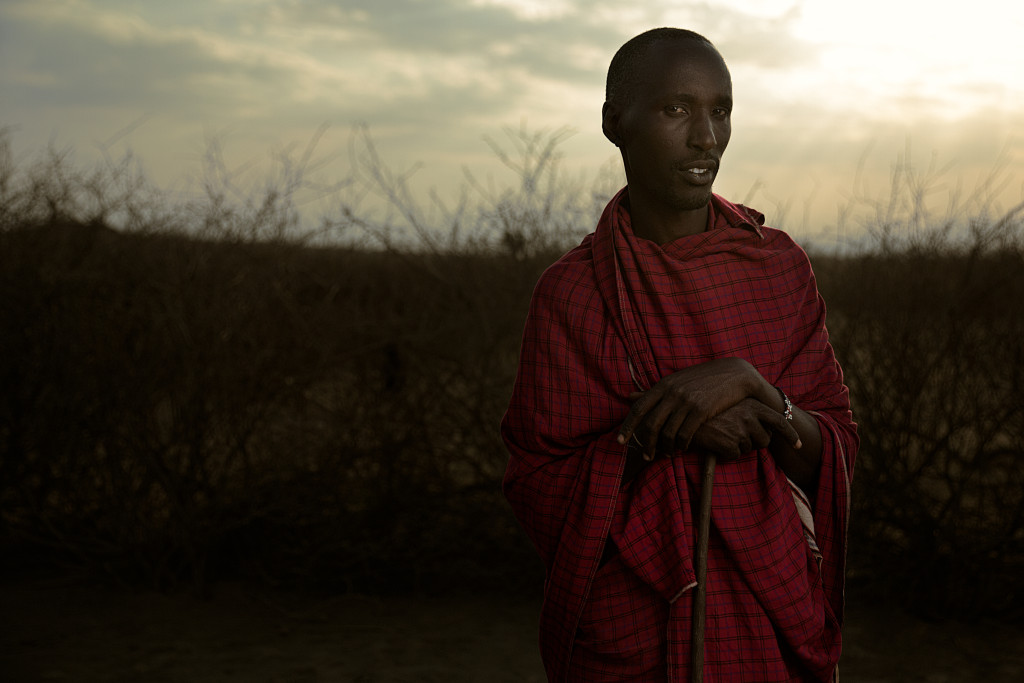 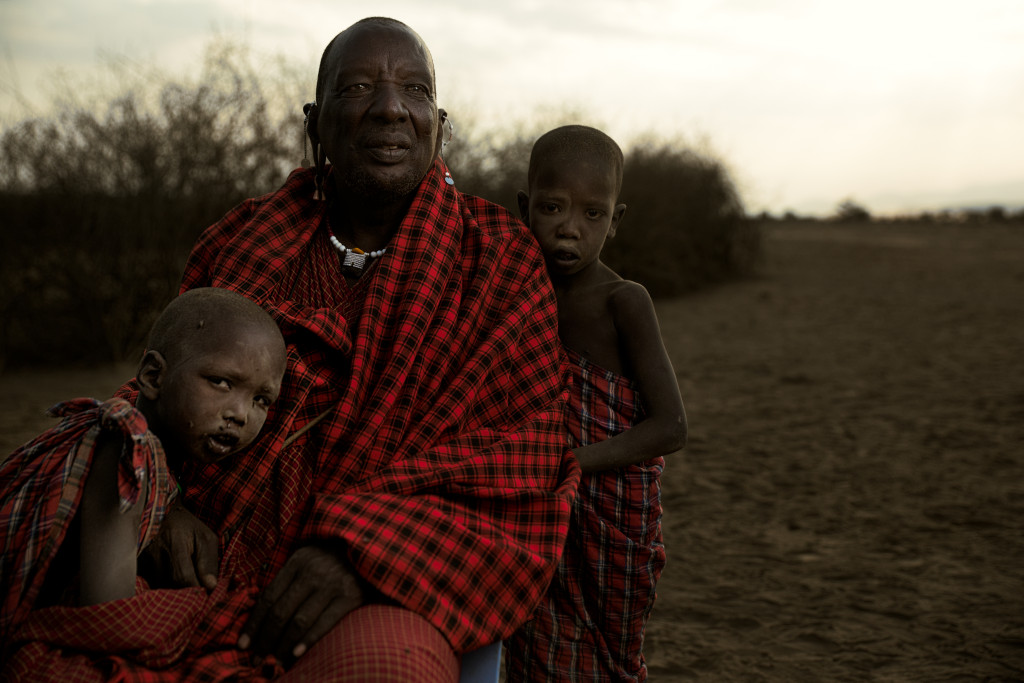 I learned something about photography that day: no matter where you are in the world, most human beings do not like to step in front of the lens of a professional. And, when you shoot important people on a schedule, sometimes you may just have five or ten minutes to pull off a brilliant piece of work. As a professional photographer, it’s my job to make that process fun, easy and quick. Despite having been in thousands of promotional photographs and video interviews, Chris Long relied on my professionalism, intuition and eye. He trusted me to produce something special. It was a test- a test for the future and a learning experience that provided me skills to do it everyday.