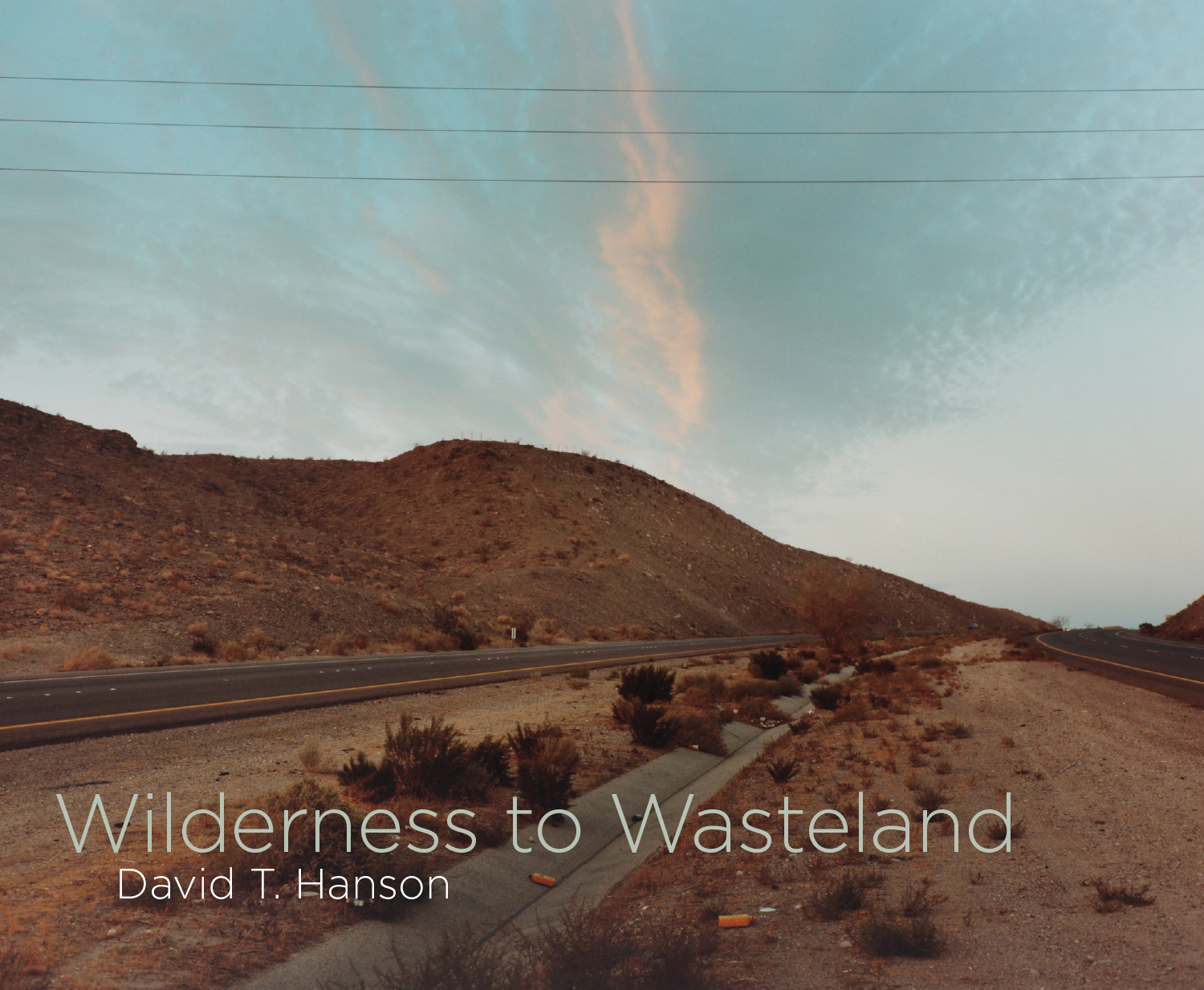 A constant goal of many artists is to make the unpleasant approachable, combining what we want to look at with what we’d rather not think about. Not only does this serve as an almost perverse form of entertainment, pitting functions of the mind against one another, but it also serves an important function within society by allowing us to digest the thoughts we would otherwise suppress. In “Wilderness to Wasteland,” David T. Hanson strikes a wobbling balance between our desire to absorb the subdued colors and patterns in his landscape, aerial, and documentary photographs with our aversion to recognizing the reality of those photographs: the detrimental harm humanity has inflicted on the American landscape.

This 197 page book, soon to be released by Tavern Press on April 26, includes 83 previously unpublished photographs along with a forward by Joyce Carol Oates (which is abbreviated here), an introduction by Hanson, and a lengthy concluding essay by Miles Orwell. The nearly 30 pages worth of occasionally repetitive text serves as explanation for what would otherwise be an assortment of images that focuses on aesthetics rather than morality. Each of the four sections of the book is a different series of photographs taken by Hanson in the 1980’s, and each has its own context that greatly affects how the photos are received. 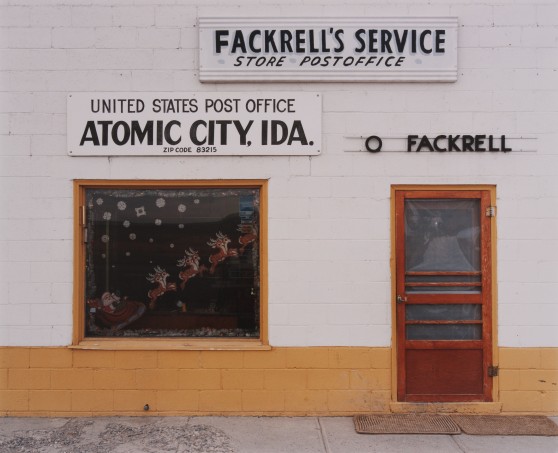 The first section, “Atomic City,” takes place in a nearly abandoned Idaho town that is actually named Atomic City. As the site of the world’s first nuclear power plant in 1951, and first nuclear meltdown in 1955, the area went from nothing to government city to ghost town in only a couple of decades. While Hanson and his commentators consider the photographs in this section (such as the one above) the be landscapes, They have a definite documentary/street photography feeling. They seem to focus on the town itself rather than the land it inhabits. They are also the most aesthetically mundane of all the photographs in the book, which is not necessarily bad if their aim is to show a visual history and encourage factual interest rather than create an emotional or moral connection to the subject matter. Still, starting the book with the least aesthetically engaging images is a certain tip-off that “Wilderness to Wasteland” is not art for arts sake, but rather art for morality’s sake. 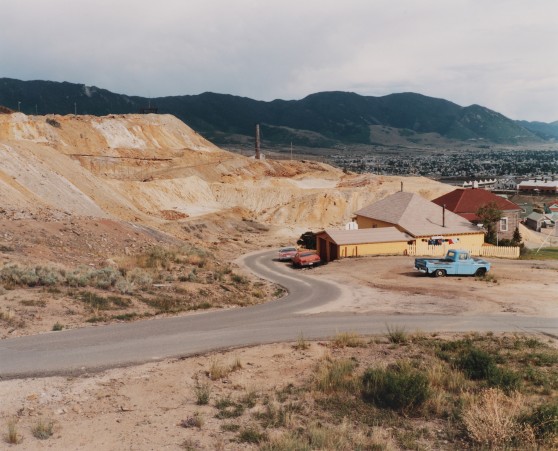 The next section, “The Richest Hill on Earth,” profiles Butte, Montana, once lauded as the most resource heavy mining location in the world. This section begins much as the previous one ended, with photographs of a documentary nature that examine a once bustling mining town now left to die. However, focus shifts in this section from the structures that make up the town to the structures the town has made, and Hanson begins to show us the vast pits and arid roads that the mining industry created. From the introductory texts, we know these to now be Superfunds, areas the government has deemed extremely hazardous and in dire need of environmental clean-up. It is here that we encounter the main message of this book: the irreparable and irresponsible damage America has inflicted on the landscape it occupies. Yes, the book also acknowledges that the U.S. Government and large corporations use poor Americans as pawns in their quests to dominate nature and the open market place, but as this section concludes a clear shift is made to emphasize the perhaps more troublesome issue of complete environmental destruction. 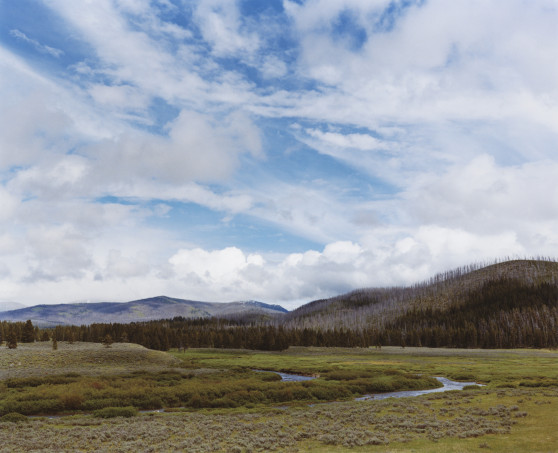 The third and largest section is the namesake of the book itself, “Wilderness to Wasteland,” and rightfully so. Initially, the fact that this chapter seems to have been created before the book’s inception irked me. A photo book tends to lose its flow and congruity if some of the section are merely support for a main series. While the dominance of this middle section does cast a shadow over the others, it is for good reason, as it successfully summarizes the entire plot of the book as a whole, both visually and thematically. The section combines a refreshing diversity of images from multiple states within the U.S. that are home to Superfunds. These environmental failures are photographed from the sky and the ground, giving us abstract and familiar perspectives of what the ignorance of past generations has created. Some of the leading photographs nearly hide the environmental destruction that we are now searching for, such as the remains of a wildfire that made early-summer look like late-fall (above). The scarred landscapes are juxtaposed with purely human creations, such as unfinished houses or an old grain silo. Suddenly, a shift is made from the ground to the sky and every shot is of the scorched earth below. Each image becomes more beautiful and more devastating than the last. By the end of this section, the photographs need no context to merit their inclusion in the book as colors and forms bridge the gap between complete abstraction and complete realism, proving that humanity has conquered nature by forcing it into submission. 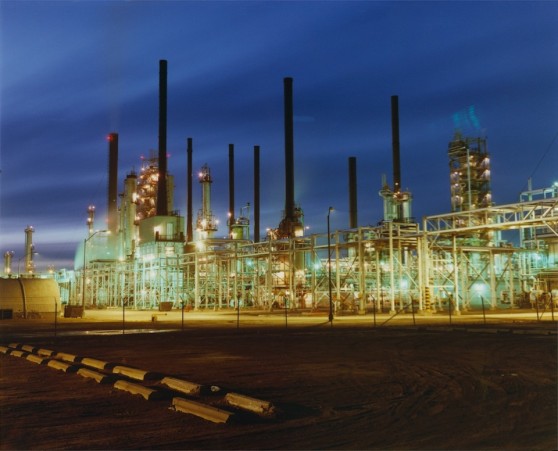 The final section is a slight letdown after the triumph of the last. Titled “Twighlight in the Wilderness,” the photographs are long exposures of still functioning industrial cites across America. The visual style of the photographs simply doesn’t fit with the rest of the book. There are similarities for sure, but their soft glow and almost complete lack of natural elements feels a little awkward after the previous three sections that dovetail securely into one another. However, there is a nice thematic shift to the future in this final section. Are these eerie industrial complexes bound to become deserted wastelands like the ones pictured in the rest of the book? Eventually, but one hopes they are at least built with enough awareness and foresight to not become Superfunds themselves. The titles of these photographs are also quite different. Instead of simply stating the location and subject of the image like in the previous sections, we see more classical titles with factual subtitles such as Fading Daylight along the Yellowstone River [Exxon Corporation, Billings, Montana] (above),  or Sunset on the California Coast [Union Oil Company of California, Richmond, California]. It’s almost as if landscape painters of the 19th century would have chosen the main titles for these locations, but the subtitles now fit the desolate landscapes that have become of those same views. While the final section may not continue the flow of the book in a satisfactory way, it still works and can be favorably considered a twist ending.

While there is a lot to love about “Wilderness to Wasteland,” and enough visual and thematic depth to revisit it many times over, there are a few minor hiccups as well. Some photographs don’t add much but volume to the book, though they don’t detract anything either. There is also an unshakable sense that we are seeing multiple projects that were not created to come together, but are now retrofitted into a larger work of art. Hanson points this out himself in his introduction, and it’s not a problem as long as you view the book as a sort of survey of his 1980’s photography practice. The message of the book is certainly striking and engaging, but it is by no means new. Still, while many have depicted the deteriorating conditions of the American landscape, few have done it with the melancholic beauty and rich historical context that Hanson achieves in this book. If the themes and images presented here have intrigued you enough to reach this point in the article, you will thoroughly enjoy the entirety of this book, which you can pre-order on Amazon. In the end, “Wilderness to Wasteland” is noteworthy for its ability to engage us intellectually, visually, emotionally, and morally in a depressing topic while still inspiring us through pure aesthetic beauty.