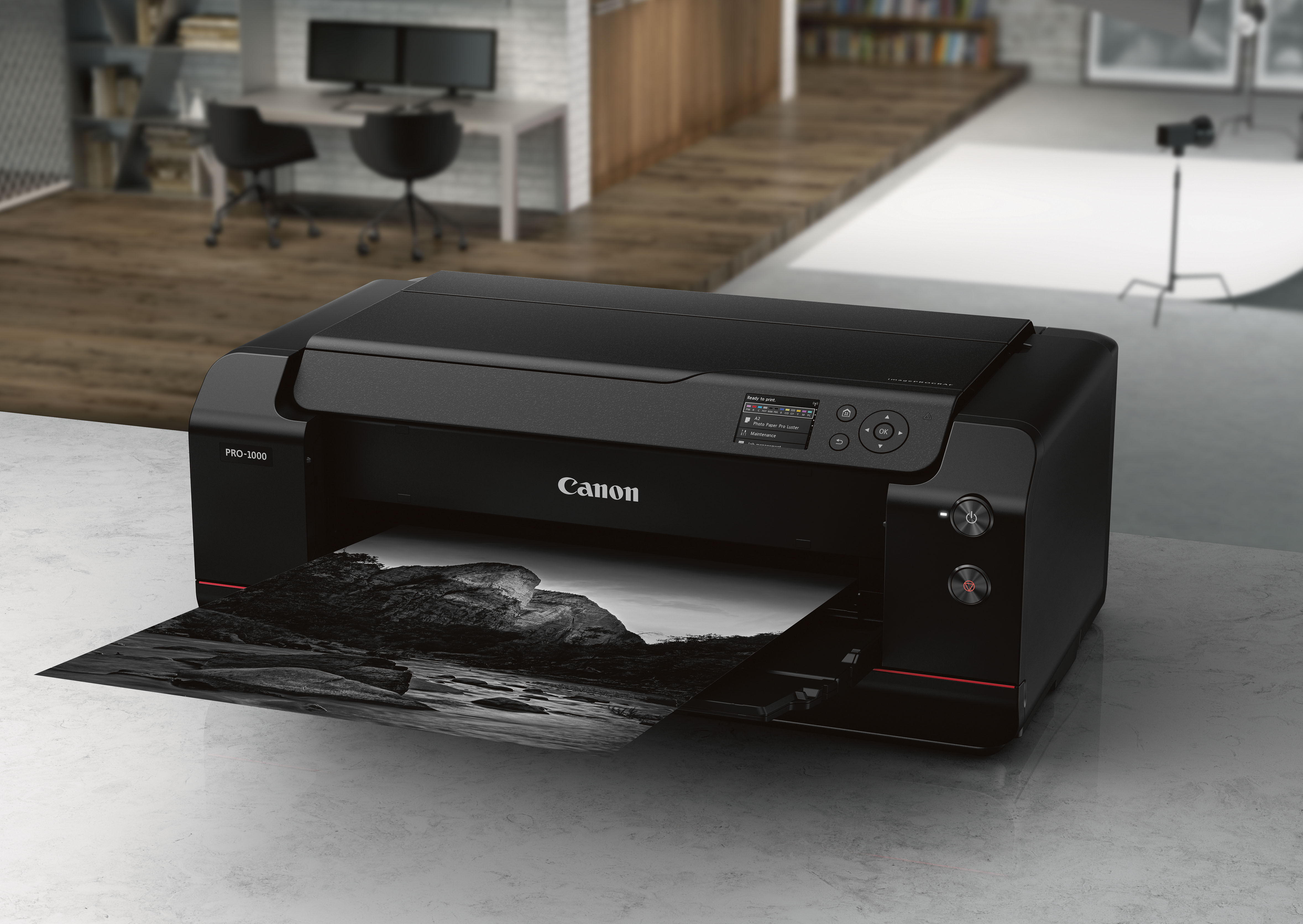 I have said it so many times and, for the most part, my opinion remains unchanged: printers are boring. They, like tripods and lens filters, get the short end of the stick in the “sexy” equipment a photographer can own. They’re seen as a tool- a means to an end. The photo gets a lot more attention while it’s on the computer screen and then again when it’s in a frame. The process between those two points is generally looked over or, worse, ignored. For me, this was absolutely the case up until I got a Canon imagePROGRAF Pro-1000 printer. I have been framing and matting my own images for years, but this was a big step for me. I decided I wanted to once again try and be in charge of my own prints, with my own paper choices. I have used photo printers in the past and I generally find them to not be worth the effort. Nozzles, print heads, ink wells, waste bins and complicated cleaning and maintenance processes just turned me off to the whole process. That said, I am good friends with many Canon people and they encouraged me to try their new printer line, citing that it was the best they had ever made and with a process that would leave me smiling. I took them up on that bet.

Late last year I assisted my now-friend Joel Grimes at a Canon event celebrating the launch of the new printer, and I spent a good amount of time watching the prints come out and get framed- photos that I had only moments before helped Joel create. It was this experience that made me more keen to try the printer for myself. The images looked shockingly good, and the prints were coming out much faster than I thought they would. I noticed very little jams, zero mechanical issues and absolutely no ink problems. Most importantly, the photos the printer spooled out looked identical to what we were seeing on the monitor. This really impressed me, so I later when I spoke to my friends about getting a printer, it took very little convincing to get me to try the Pro-1000 for myself. 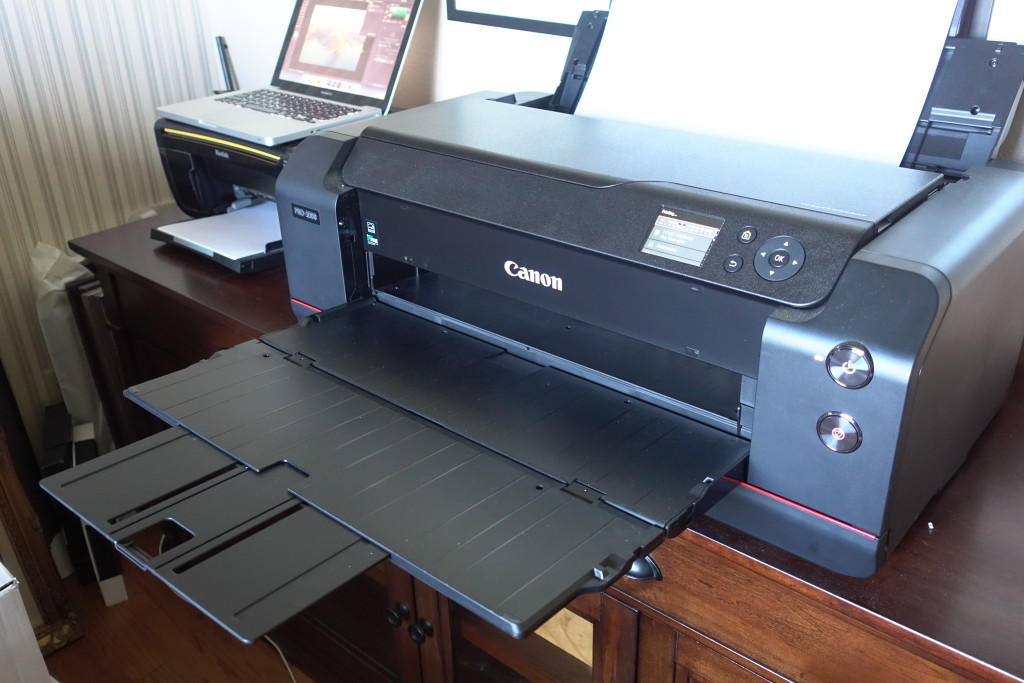 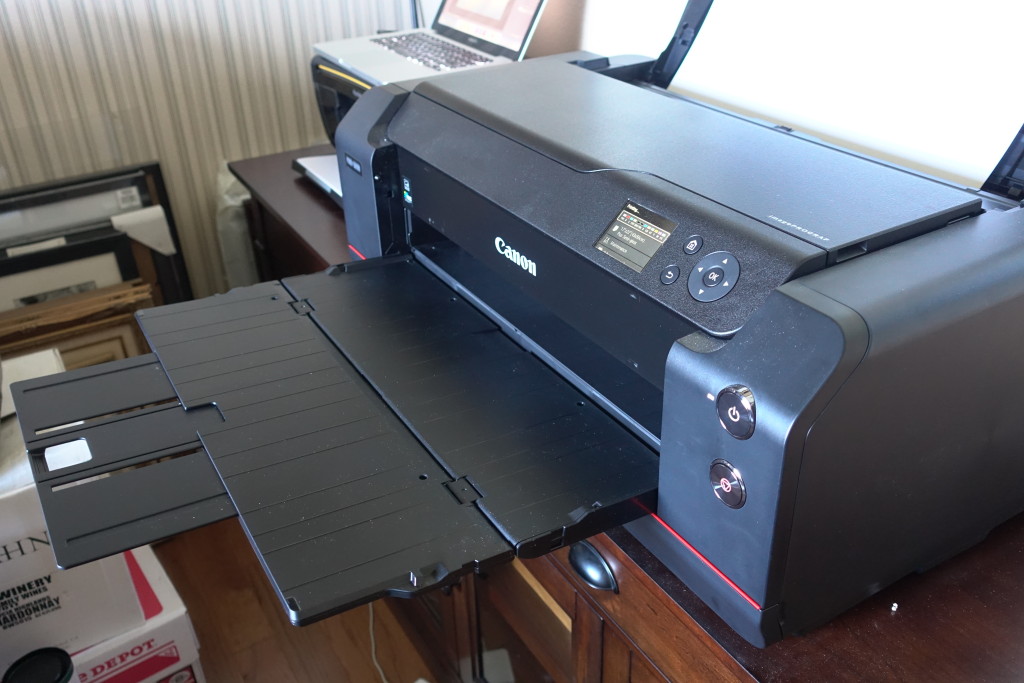 As far as printers go, the Canon Pro-1000 is small. Now don’t get too excited, because it’s not at all compact or easily transportable. In fact, once you get this thing set up you probably won’t want to move it again. It’s heavy and shockingly bulky. Even in my photos here it looks pretty petite and manageable, but then I have to remind myself of the process of getting it out of the box and onto that table. It’s never moving again. But once you get this thing in place, I don’t really see a reason it should move. It has a permanent home in my print studio, ready to go whenever I need it.

And that’s where I’ll start with one of the things I like about this printer: it requires so little attention. It has built-in settings that keep ink from clogging when not in use, and fires up pretty quickly whenever I want to make a print. It’s liberating to be able to set and forget this printer, and then come back to it when I’m ready to put more images to paper.

The original setup for the Pro-1ooo was pretty straightforward. The instruction manual that comes with the printer is a eye-busting hundreds of page long document, but you don’t have to read the whole thing. From the point you plug it in to when it’s ready to make its first print, the computer software and the printer itself guide you through the process swiftly and with few pain points. From plug in, through calibration to preparation, the whole process took under about an hour. 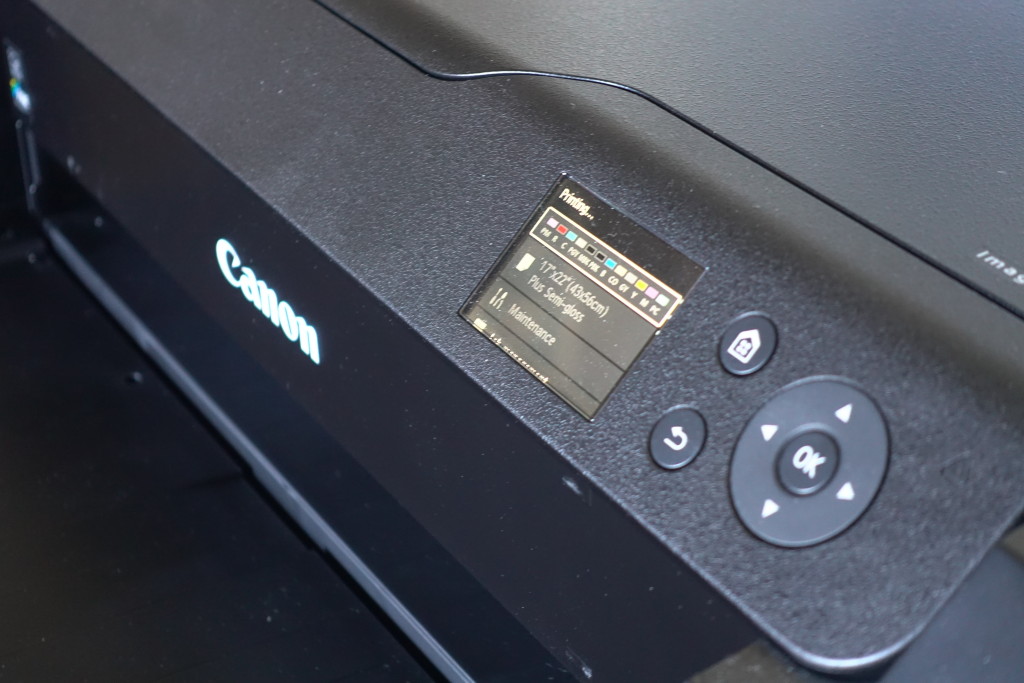 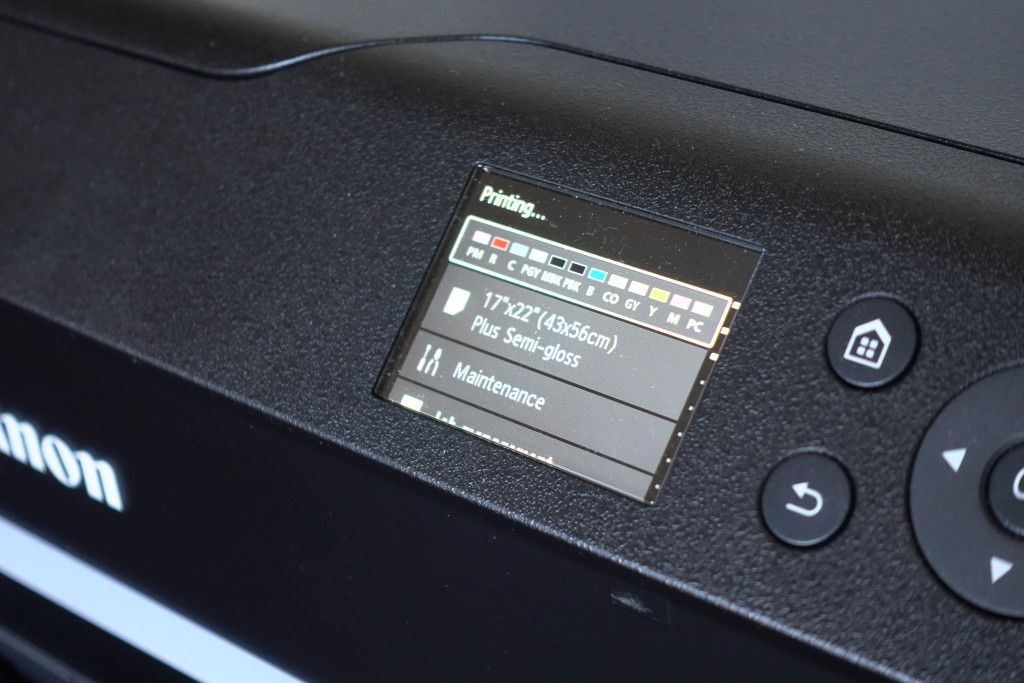 The Pro-1000 comes with 12 ink colors with their own cartridges, and you can get anywhere from 20-35 prints on a single run of ink (depending on what you’re printing, the color and the size of the prints, of course). That’s a lot of prints, and each one of them looks just as spectacular as the next. I printed until I was told by the printer it couldn’t give me any more, and the last print looked just as stellar as the first. There was no fading or missing colors- to me it seems if the printer can’t make a good image out of the ink it has, it won’t even try. I’m giving the Pro-1000 a personality it doesn’t have, but it seems to want to make each print perfect. That, I really respect. 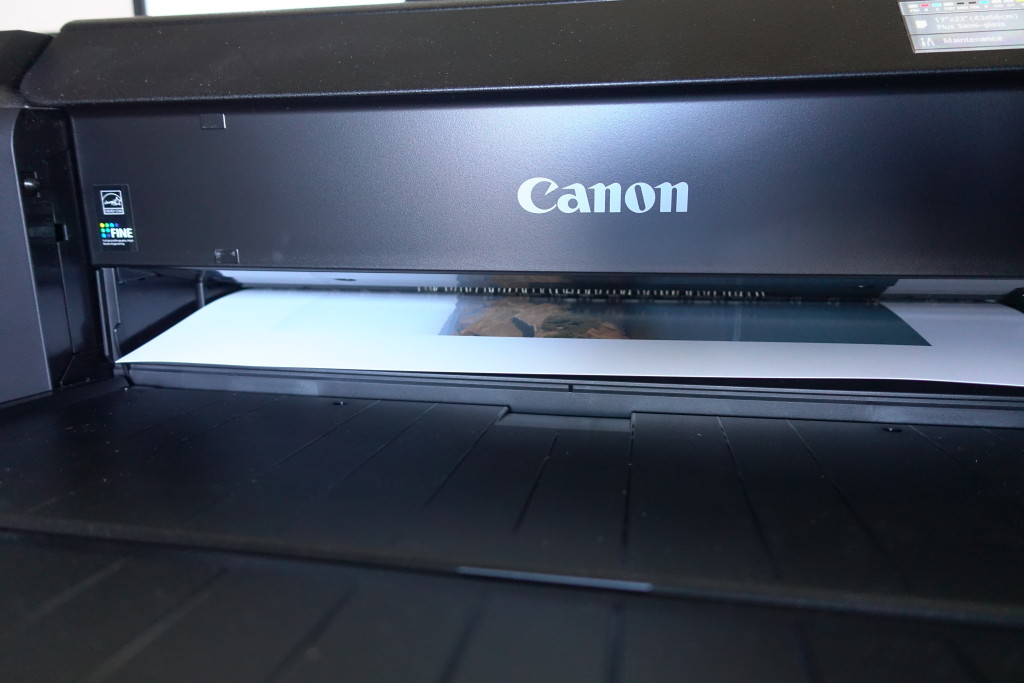 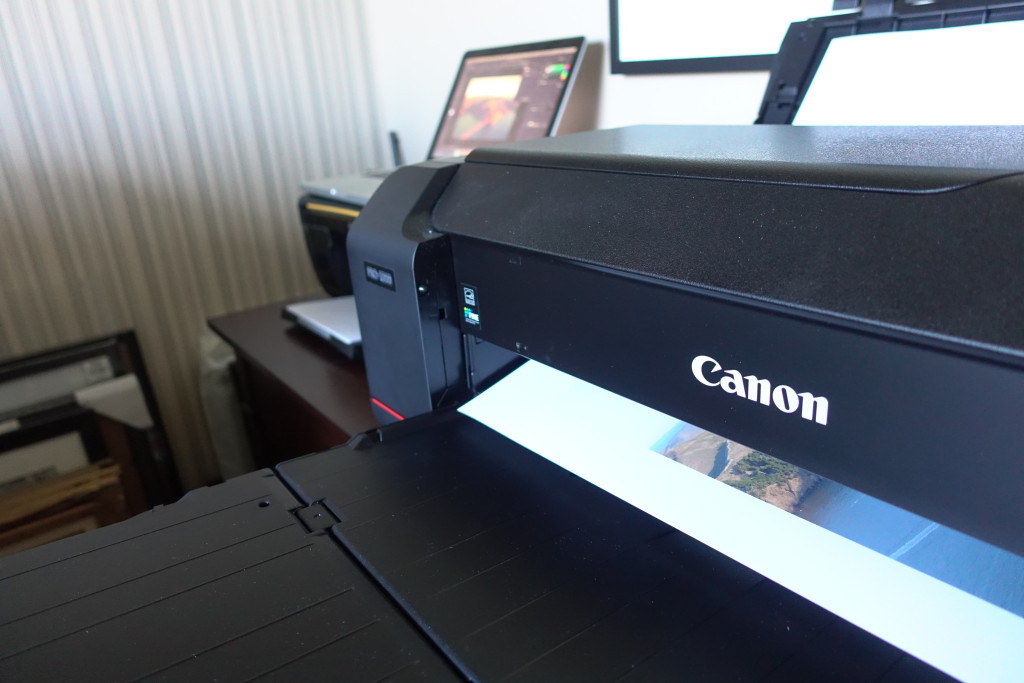 It takes between five and ten minutes to produce one 17×22 inch print out of the Pro-1000, which to me feels really, really fast. Paper selection is easy, as the menu on the printer easily lays out all the possible paper options, making it easy to swap between styles quickly and efficiently. For me though, the actual process of hitting “File -> Print” out of Photoshop and getting a spectacular photo was the most gratifying. You can achieve even greater bit depth to the prints by going through the Canon application as well, opening your options depending on what you’re printing, and for who. 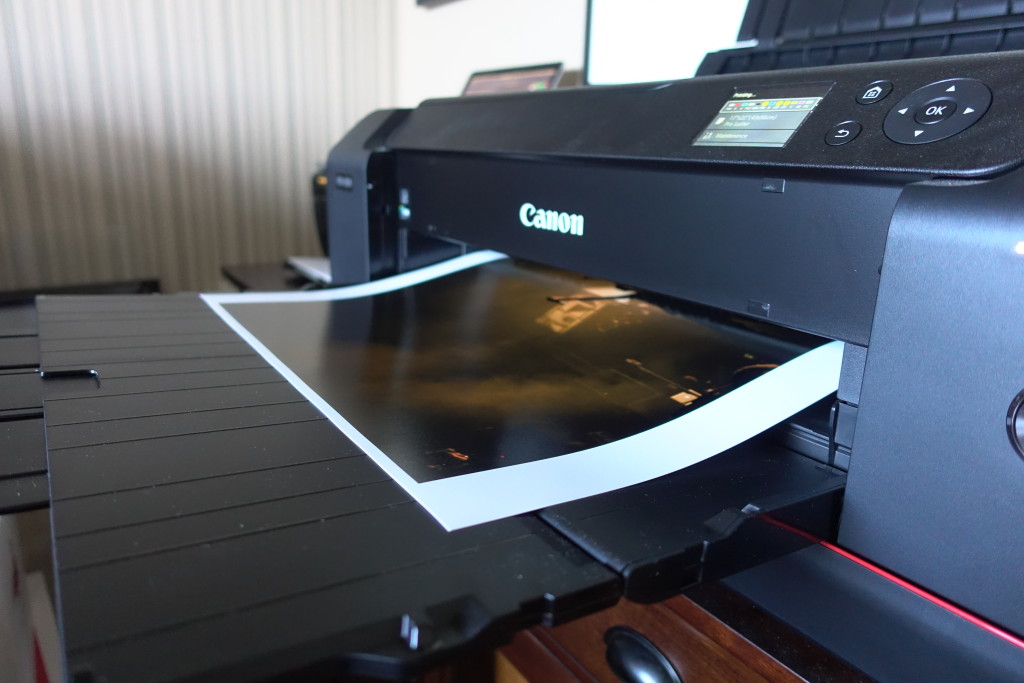 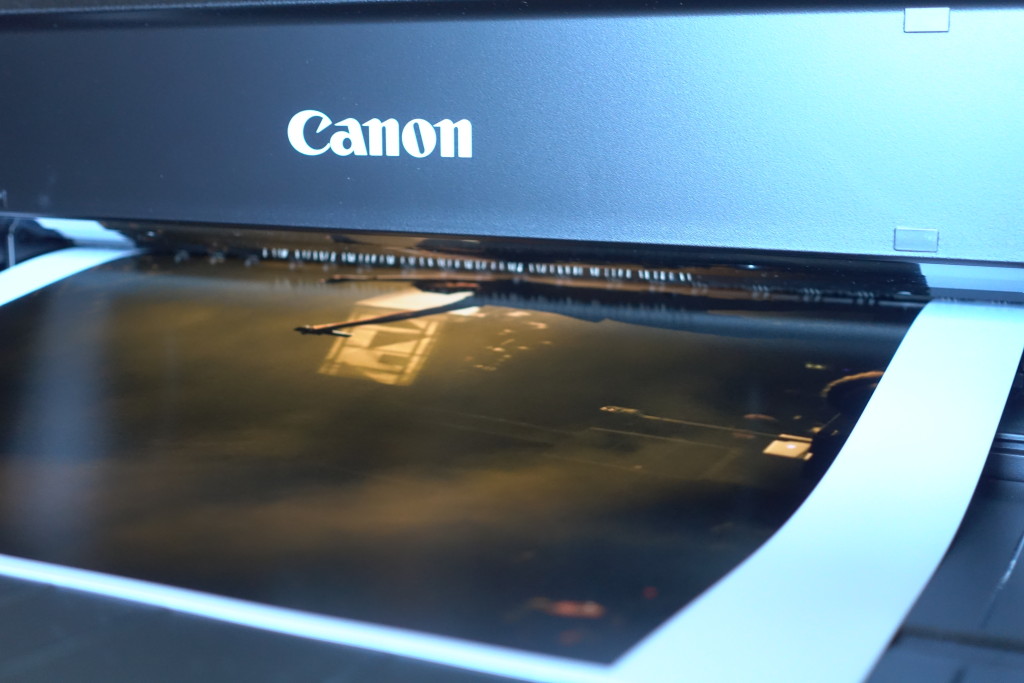 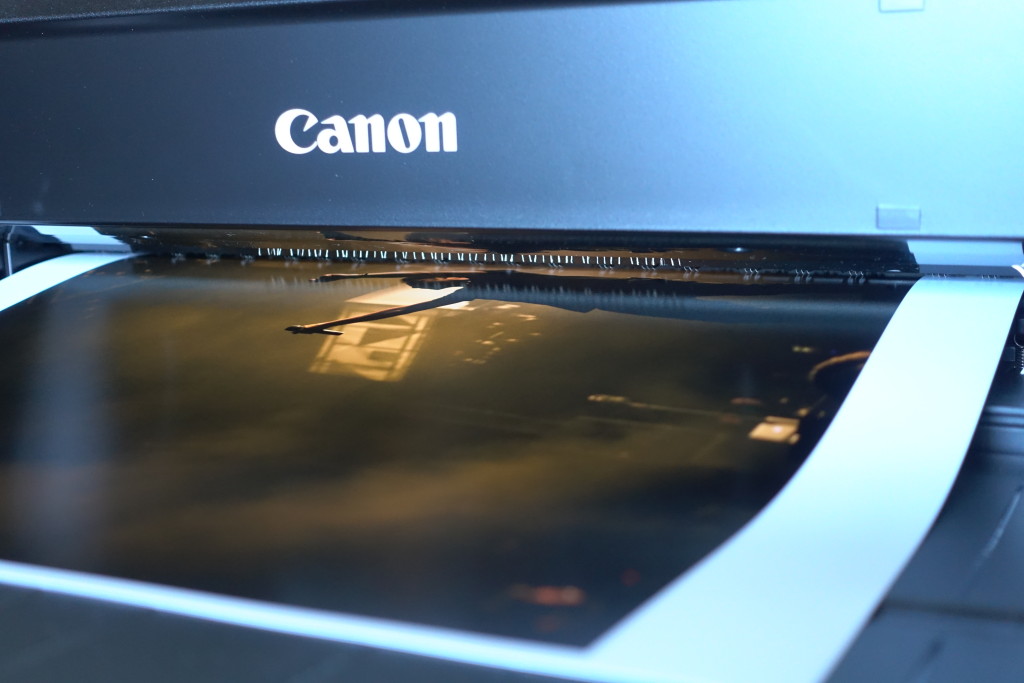 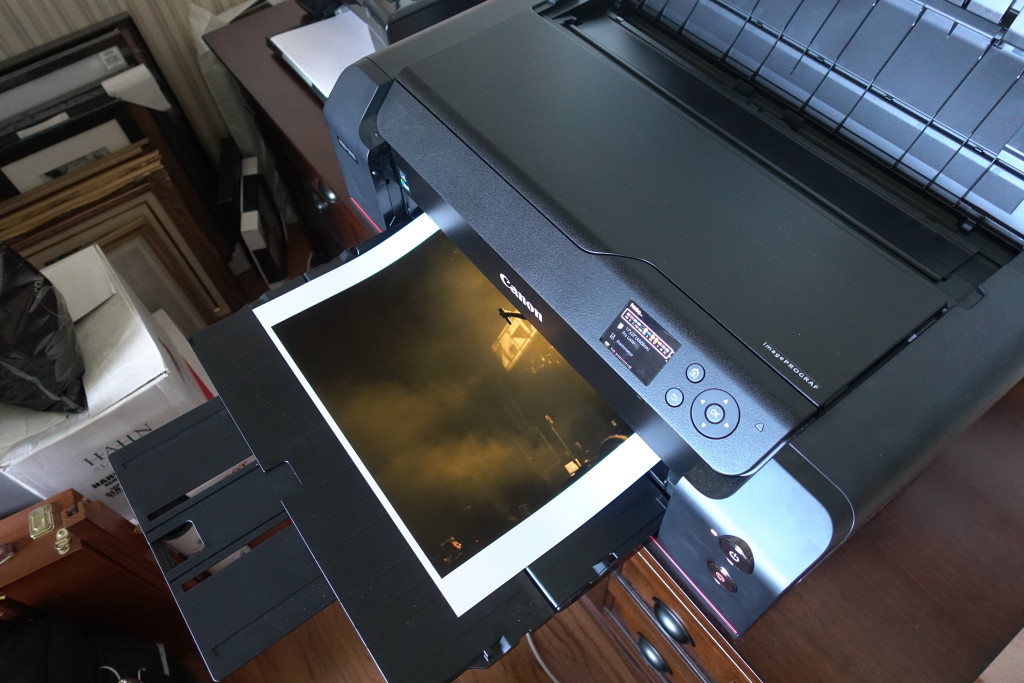 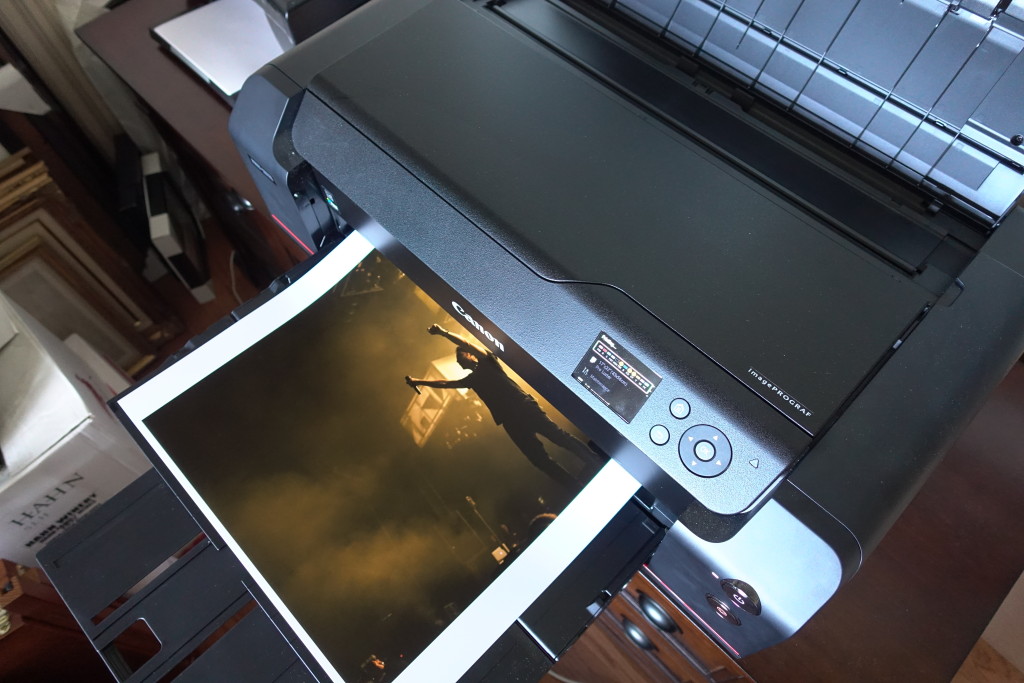 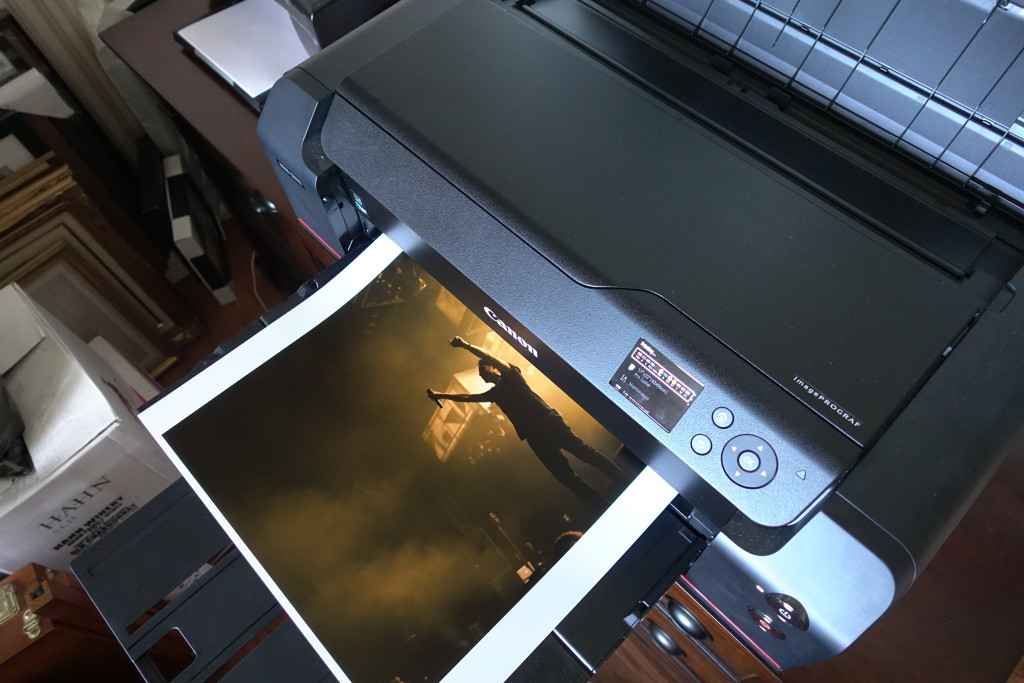 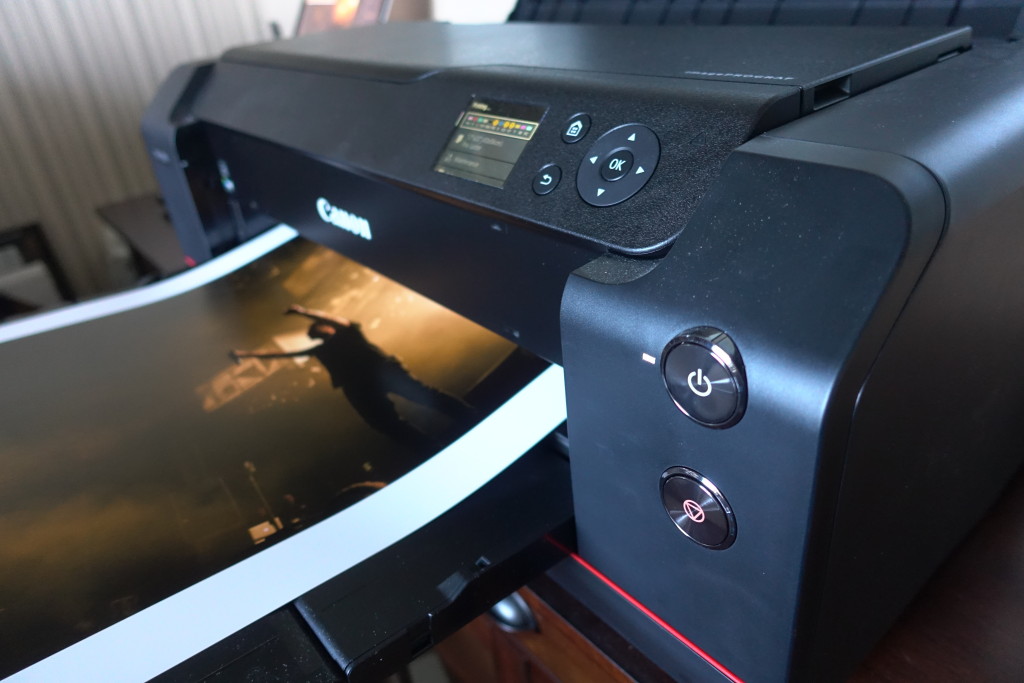 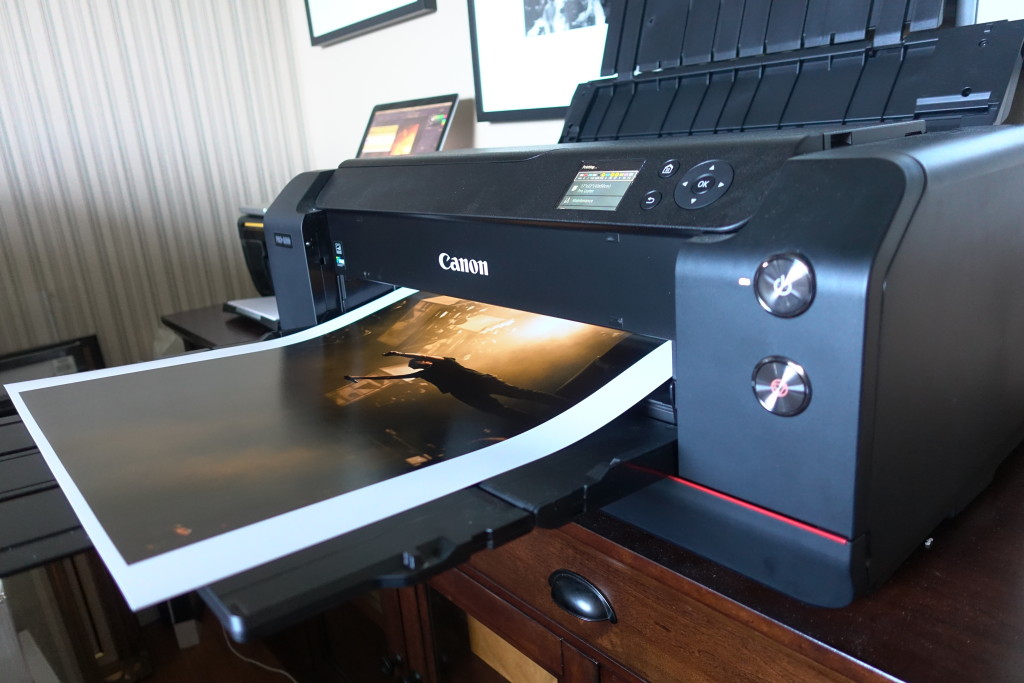 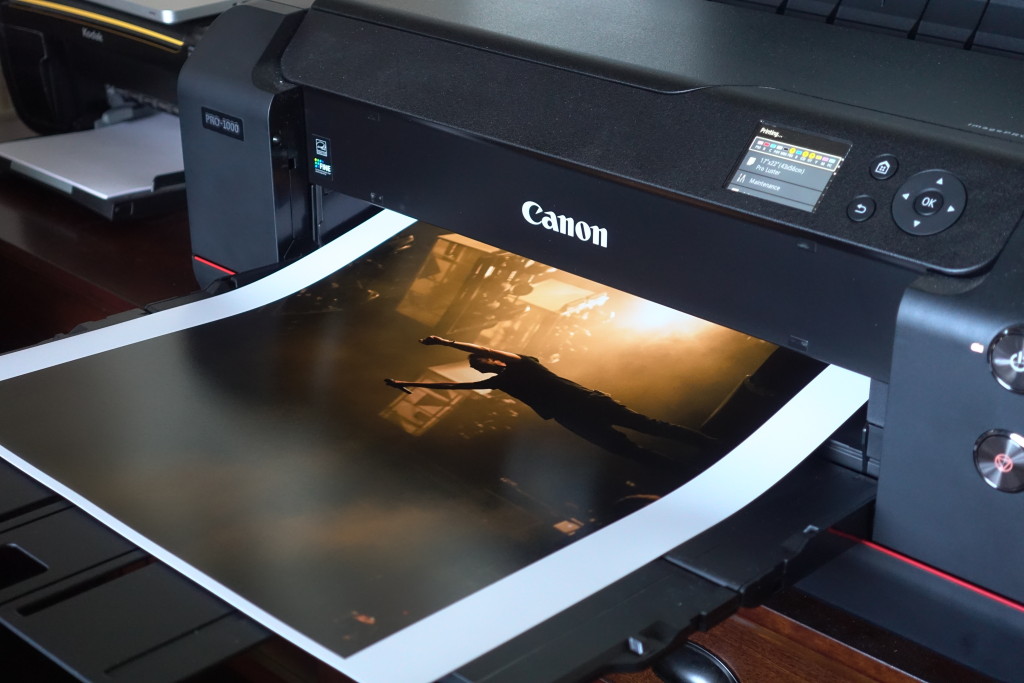 It should be a testament that I have pretty much nothing else to say about the Pro-1000. It’s a stellar piece of hardware that works so damn well that I don’t have to think about it. That’s what I look for in all the equipment I love, and the Pro-1000 is the first hassle-free, joy-filled printer I’ve ever used. Every image comes out exactly how I wanted it to, and every print is the same experience. Like I watched happen at that Canon event, I have had absolutely no hiccups with my Pro-1000 in 30 printed images, which I think is a huge accomplishment for Canon.

Being a digital medium, I can’t really show you the images I took other than to take a photo of them… which isn’t really ideal. It is here you’ll really have to take my word for it: the images look spectacular. I have taken a very close look at the images using a print diopter (which are used in print shops to determine the alignment of the color dots) and I was really surprised: I can’t discern the printed dots. The Pro-1000 does such a good job with the prints that the way the colors blend and meet is totally seamless. If you’re a print nerd, this means something to you. If you’re a normal person, here is what it means: “woah.” 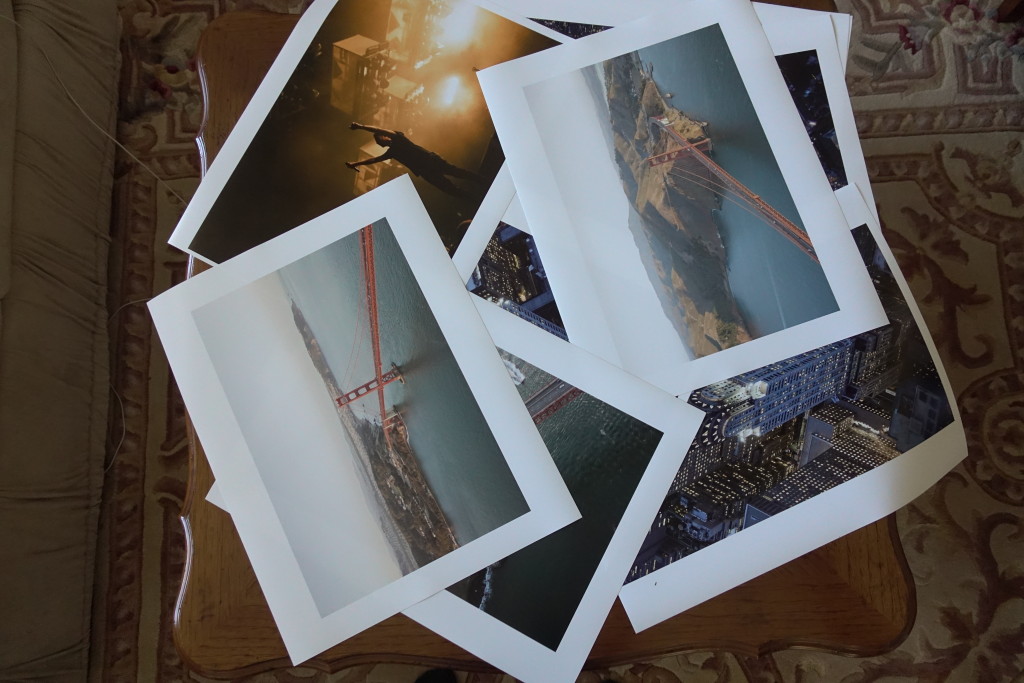 This is as close to the images as I was really able to show with the camera I had on hand: 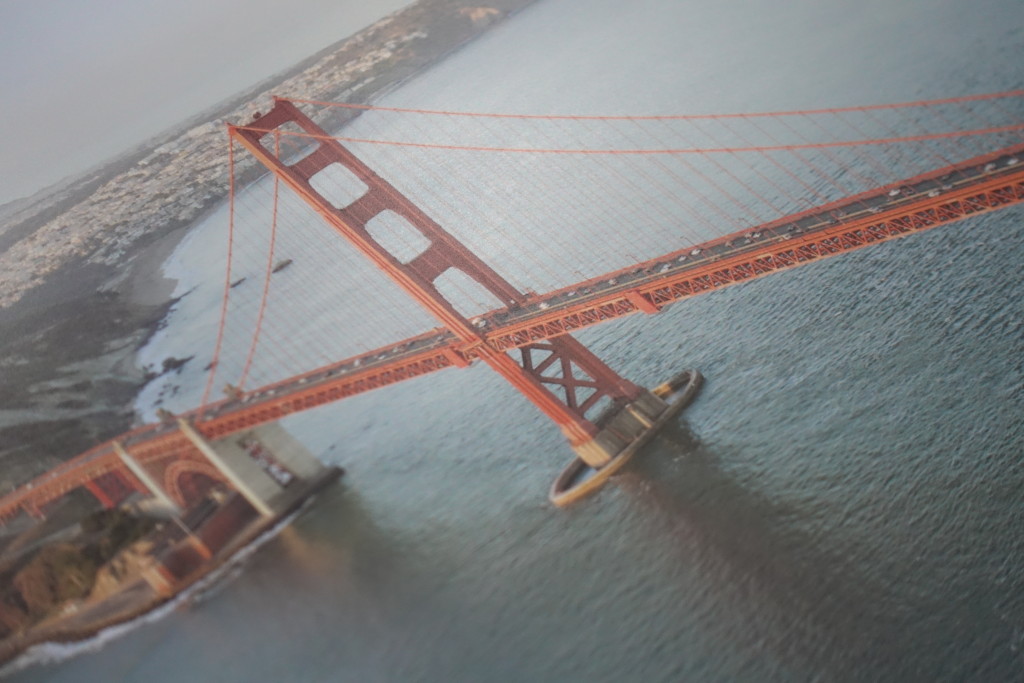 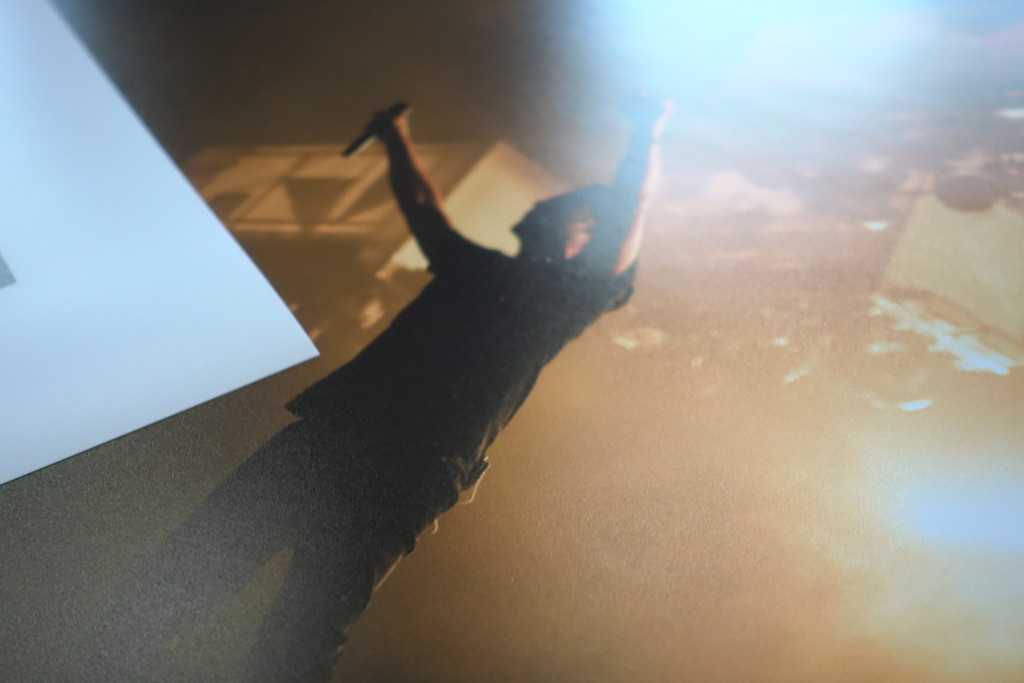 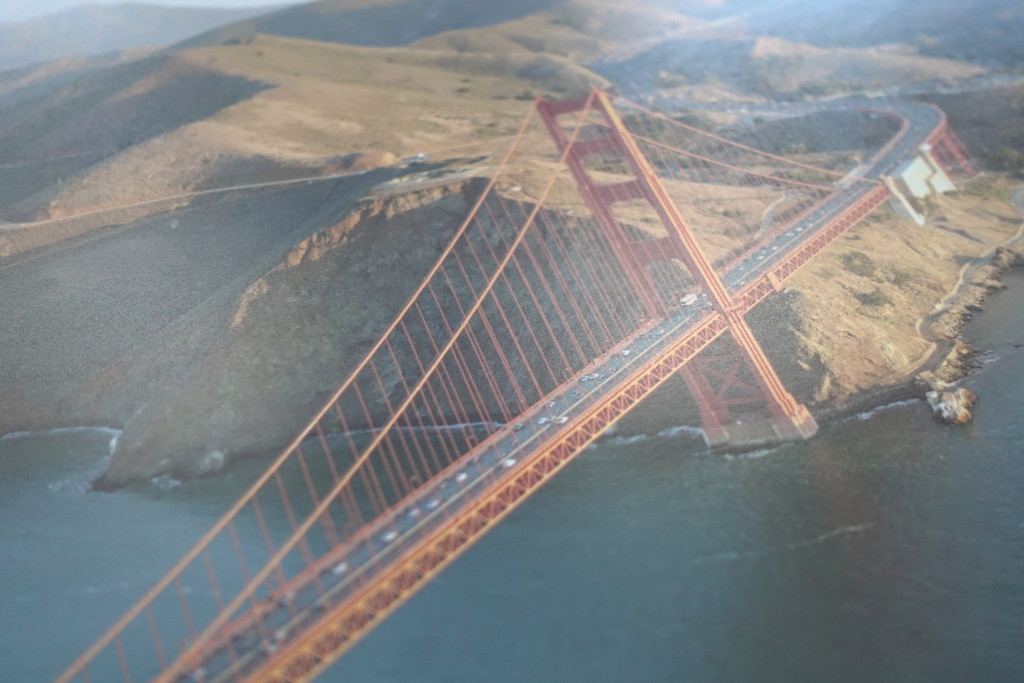 Blacks are black (and I mean actually black, not just a dark bluish cyan), whites are white, and colors are beautifully rendered. The Canon Pro-1000 really is quite good at its job, and I don’t think I am capable of being happier with this thing. I’m on cloud nine when I can print out one of my photos and look at it in a frame. The looks on people’s faces when I gift them prints is something really special, and the Pro-1000 is helping me garner that look time and time again.

I’m dishing out something I rarely give, and that’s a perfect score. The Canon Pro-1000 deserves it, and the way this printer has changed my expectation of how a printer should work is rather impressive. In fact, this printer works so well that I find myself enraged at my office printer when it can’t get a FedEx label right. At any rate… We give the Canon Pro-1000 studio printer a perfect 5 out of 5 stars for very simple setup and maintenance and exemplary performance.