All 10 Virtual Reality Cameras you can Buy Right Now

If you’re unaware of the impending domination of Virtual Reality, I’d like to be the first to welcome you to the year 2016. A lot has changed since you entered your deep-sleep hibernation or whatever it was that kept you from hearing about the rise of VR over the past two or three years. While it is still far from mainstream, VR is definitely picking up some momentum, and it seems like there’s a new startup or tech giant announcing their take on the VR camera rig every day. While there are a ton of companies talking about their Virtual Reality futures, there are only a few that actually have recording solutions ready to go right now. While most of the “professional” options are rental only or exclusive to the studio that built them, there are still some cameras available to those looking to get Hollywood-level footage with their own equipment.

Here, we’ll go over every one of the 1o options for shooting some form of VR footage that you can buy online today, from the least expensive, “Youtube-ready” cameras to the most expensive, “Oscar-ready” ones. 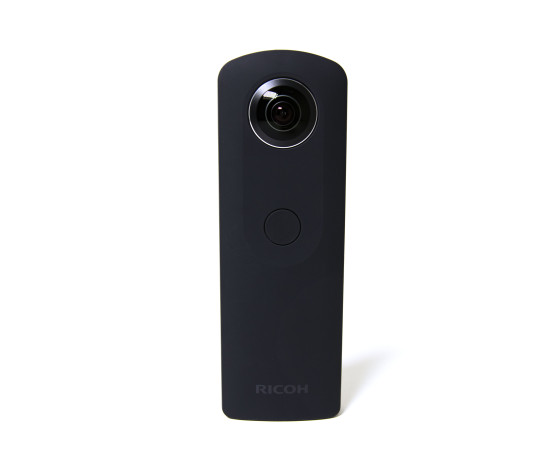 It’s no secret that we here at Resource Magazine love the Ricoh Theta S. Ricoh was the first company to jump on entry-level VR and released the Theta M15 before updating it to the Theta S, which means this camera has already fixed many of the bugs and UI issues you might find in other cameras on this list. It shoots completely spherical 14.4MP stills and 1080p videos, and it’s extremely easy to use. This is our recommendation for most people looking to get their feet wet in the Virtual world. This recent release, becoming available April 29th, packs a lot of compelling tech into a small package. Like many cameras on this list, it copies the basic design of the Theta, with a super fisheye lens on either side to stitch together one, spherical image. But this one shoots in 4K. While many people have already decided this to be the best inexpensive option — including friend of the magazine Casey Neistat — we’re a bit turned off by the fact that it will only work with a Samsung smartphone, so iPhone users will be forced to skip this option. Shame, really. 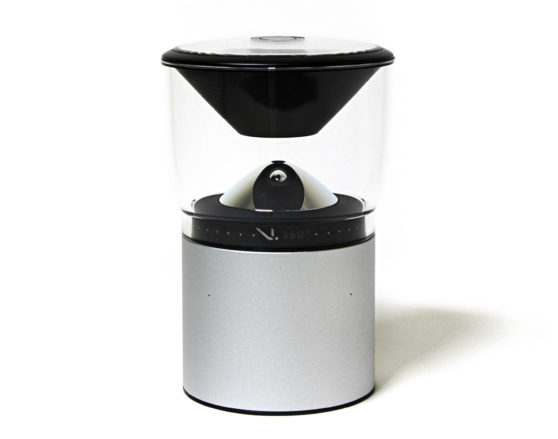 This camera has a unique, somewhat limiting design. Instead of two cameras on either side, it has one camera and a cone-shaped mirror that reflects the surrounding light into the single lens. While this design outputs a 360 degree panoramic image, it’s not spherical so the top and bottom are missing. However, it’s rugged, waterproof, and can be used with GoPro mounts, so there is definitely a niche market that this camera serves well. 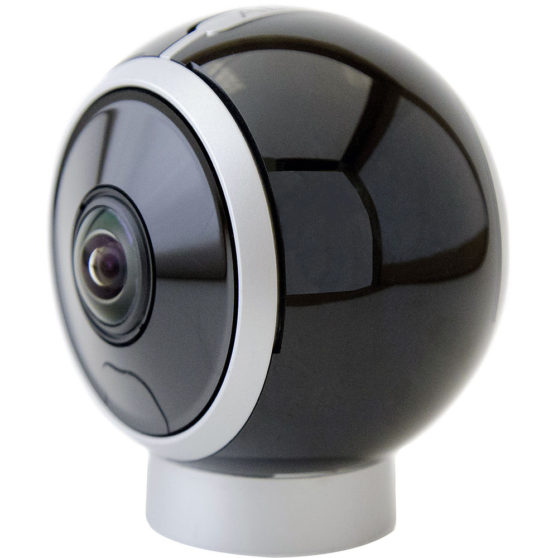 The ALLie is more of a surveillance camera than anything, and it comes from a company that is known for making great baby monitors… so that’s something. Still, it uniquely shoots spherical video that overlaps on the stitching seam by 8 degrees, meaning there is  absolutely no blind spot. It also has infrared lights that allows it to shoot in complete darkness (presumably with significantly lower quality), streams live to Youtube and Facebook, and includes 24/7 cloud recording. Overall, this camera is probably best as an all-in-one surveillance kit, but it could be a great live streaming option too. This one comes from an unspecified Chinese company and has some questionable design features. The two cameras aren’t aligned on either side of each other, which probably makes for some odd stitching issues. It also claims that each lens has a 230 degree field of view, which I’m pretty sure would mean the camera records a chunk of the actual body, since the lenses don’t go to the edge of the silver/black rectangle itself. While I haven’t personally used this camera, I think it’s probably best to steer clear and pick any of the more established options on this list. 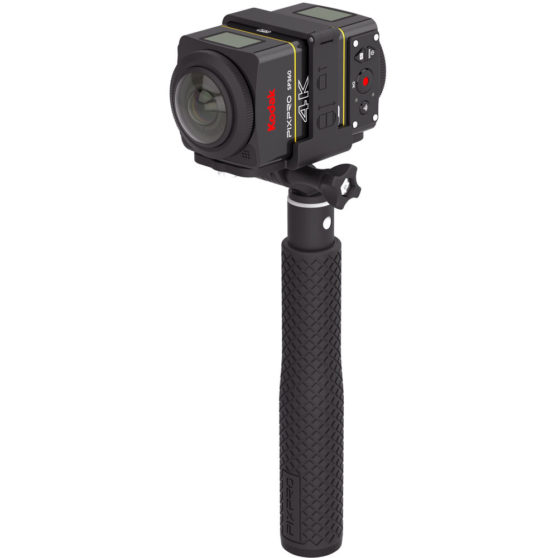 There are actually two Kodak VR cameras available, the PIXPRO SP360 HD and the PIXPRO SP360 4K. Both share the same basic design, including the ability to be mounted in a waterproof housing, with the obvious difference being their video resolutions. As standalone products these don’t shoot true spherical video, but when purchased in Kodak’s Dual Pro Pack, you get two PIXPRO SP360 4K cameras slapped together that produce separate footage you stitch together yourself. If it’s a rugged, two sided, 4K VR camera you’re after, I’d suggest waiting for the Nikon KeyMission, which is coming later this year. 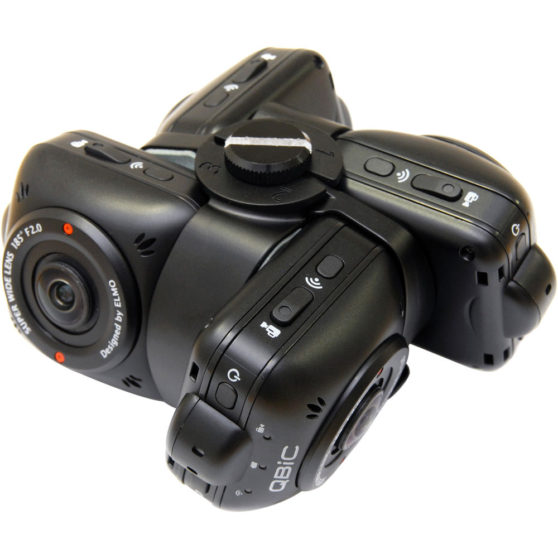 This one is just 4 GoPro knock-offs glued together that capture non-spherical, 1080p, unstitched video for over $1,000. Need I say more? 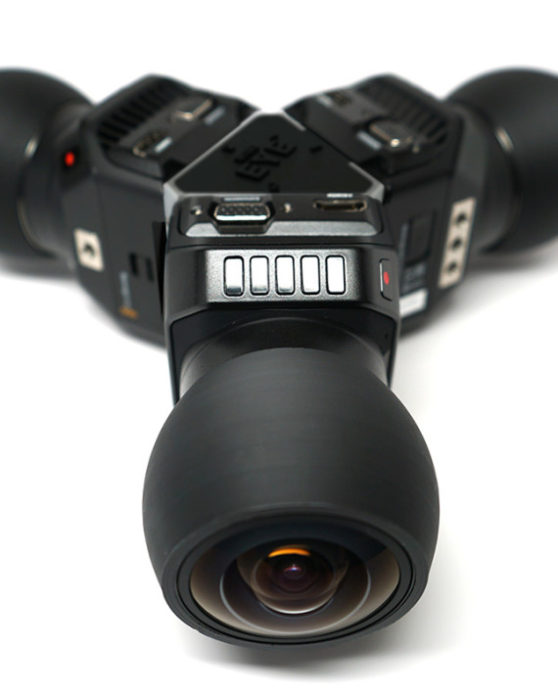 Now, we’re getting into the big-boy stuff. These two separate but closely related rigs come from 360 Designs, a company that touts itself as the only professional VR camera company in the world because it uses Blackmagic cameras and therefore has an interchangeable lens system. The Mini EYE 3 and 4 have either 3 or 4 Blackmagic Micro Cinema or Studio cameras mounted in a disk shape, so they don’t give you a completely spherical video. They do, however, give very high-end looking video after a lot of professional post-production stitching and editing. Still, if you have the know-how, crew, and capitol for this option you can make VR content that will arguably be ready for some serious gigs and film festivals. 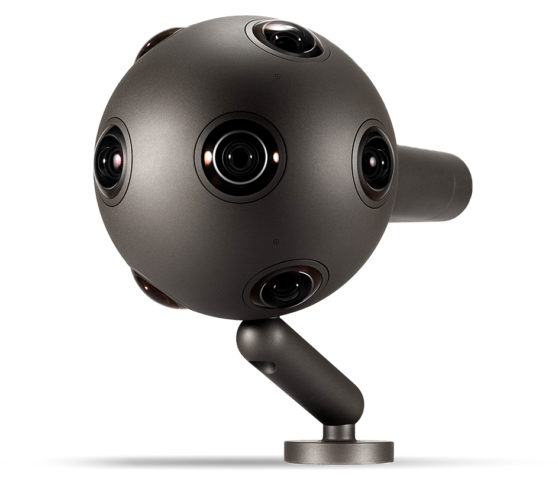 This is, in my opinion, the absolute best camera on this list. It’s quite a feat of design and engineering, and it comes from frickin’ Nokia! Yes, the people who brought you your first ever flip-phone are also the first to sell a complete VR studio solution (as apposed to the Jaunt One, Condition One Bison, or other studio contracting options). The OZO’s 8 cameras combine to shoot 3D, 4K, spherical video and spherical audio that it stitches together itself to producing one, all-inclusive file. It requires no wires to record for 45 minutes straight, and it can even live stream a preview to a VR headset, a crucial development that no other camera can offer. If you want to create your own VR studio without building your own camera, this is your only option. But it’s a good one. The other offering from 360 Designs pushes the boundaries of both practicality and sanity. This design monstrosity consists of 42 (yes, 42!) 4K Blackmagic cameras and 24 microphones strapped together. Because it has so many cameras, it’s the only camera capable of creating 3D video in all 3 axis your head can move. It’s definitely a professional option and could theoretically make the most stunning VR content the world has ever seen. But can you imagine calibrating this thing, let alone stitching the final video files together? I’m no expert, but there’s no way this thing will work consistently. 360 Design would probably disagree, but until I see some sample footage (which has yet to be released) I will remain extremely skeptical.

So there you have it. If you want to begin shooting your own VR content without constantly renting pricy equipment, these are essentially your only choices. Again, I’d recommend starting with the Ricoh Theta S and moving on from there. If you come across any more available options, please post them in a comment below so we have a running tab of all the VR cameras money can buy.