Beating the Law and Shooting with Strobes in Los Angeles 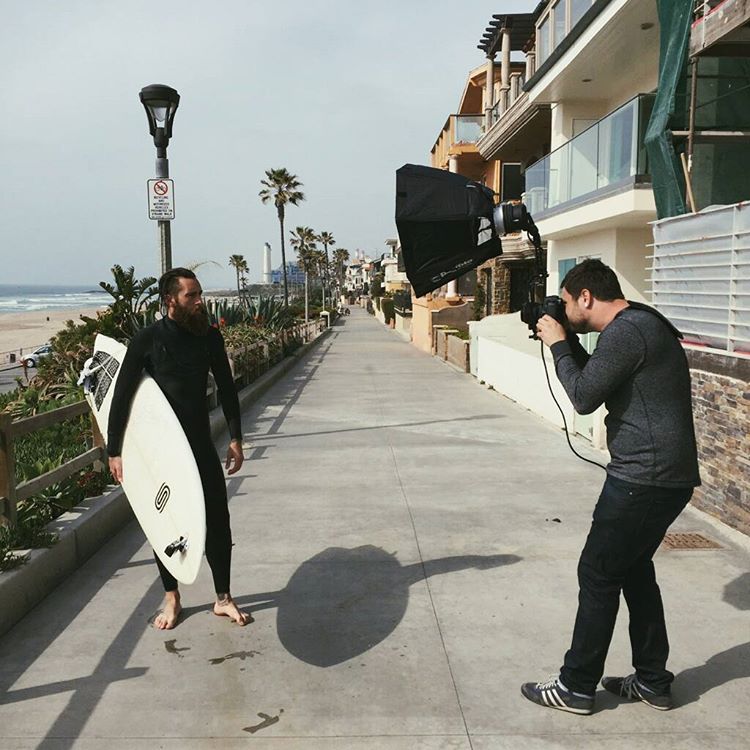 Back in July, I moved out to Los Angeles to continue my career as a headshot and portrait photographer. For my entire career, I’ve used strobes on location, and largely, have ran into little problems when it comes to shooting on location. So much to my surprised, when I moved out to LA, I learned an important lesson – You Can’t.

Now, I’m not a lawyer, nor do I pretend to be. But from what I’ve learned from other photographers and through my talks with Film LA (a company who runs the permit system for Los Angeles), is that any off camera flash units on light stands or use of multiple people as assistant can constitute a photoshoot as a commercial shoot. Failure to get a permit for any commercial shoot (permits run from $70-150 for a standard small photoshoot), can result in your gear getting confiscated, and significant fines for not following the laws set in place for LA filming and shooting.

Now again, I’m not a lawyer, but I quickly thought to myself “Shouldn’t commercial shoots be delegated based on finances exchanged, and not by the quality of gear being used?”. By no means if I’m shooting a friend for my portfolio, should I have to pay $100+ dollars if no one is making money from the photos. Which then brought me to my next thought….”How can I bypass this?”

Eventually, it hit me. Off camera lighting is not allowed, but lighting attached to the camera certainly is. By no means are officers taking cell phones from people who are snapping selfies on Venice Beach. So how to do I mount my light to my camera, and still get all the functionality that I’d expect if it was on a lightstand? Enter the Boomerang Arm by ProMediaGear.

What is the Boomerang Arm?

The Profoto B2 is a revolutionary flash unit. Packing 250w/s into a strobe that weight as much as a speedlight is no easy task, and give you a number of mounting options. So when the Profoto B2 was released, so was the Boomerang Arm by ProMediaGear. In short, the Boomerang arm is a swivel arm that attaches to the mounting plate of your camera, wraps around your lens, and mounts a light above the camera, and makes it all fully adjustable. It also, technically, bypasses any laws LA or any other major city has against strobing on location – since through a series of steel beams, the light remains attached to the camera. 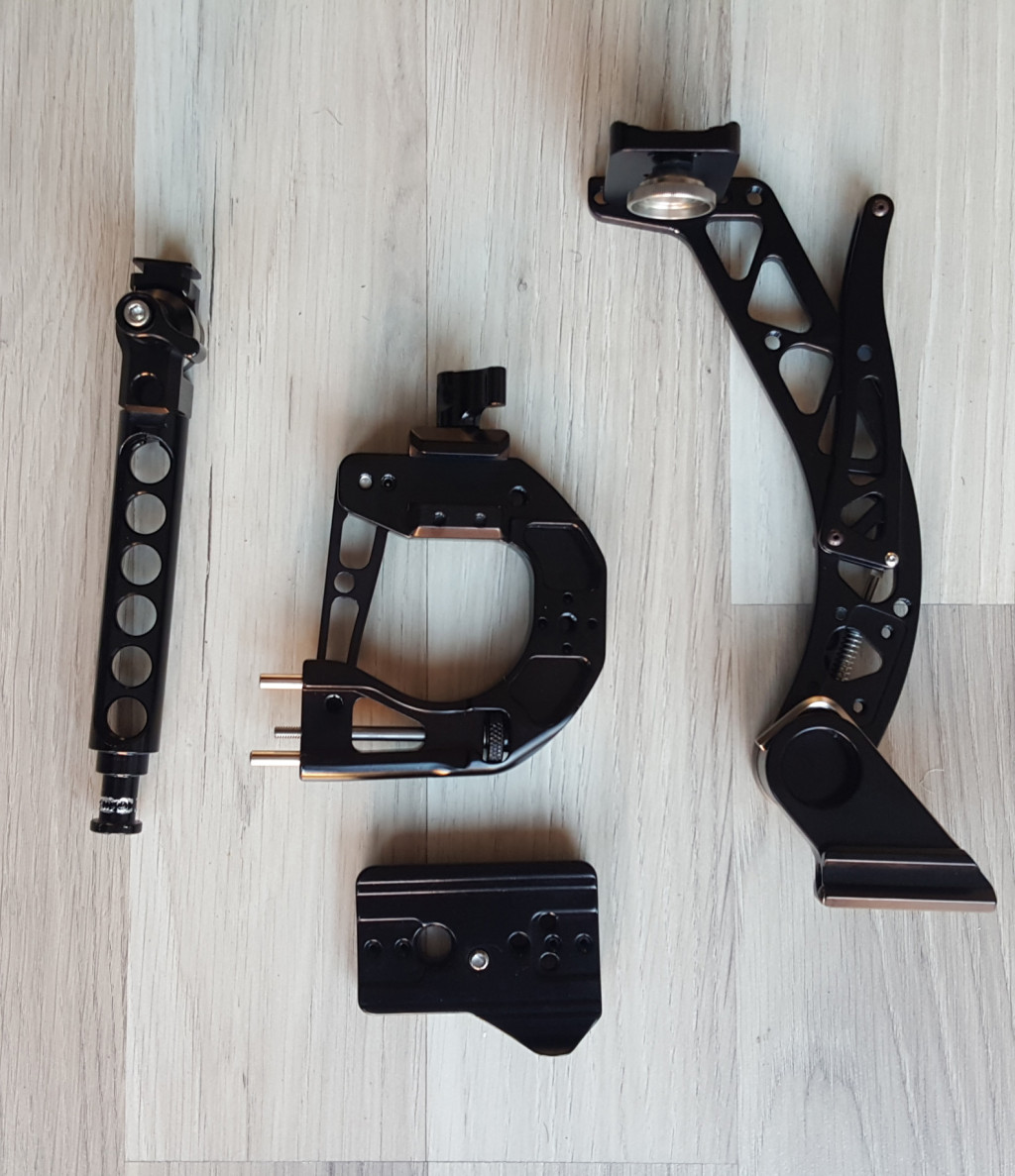 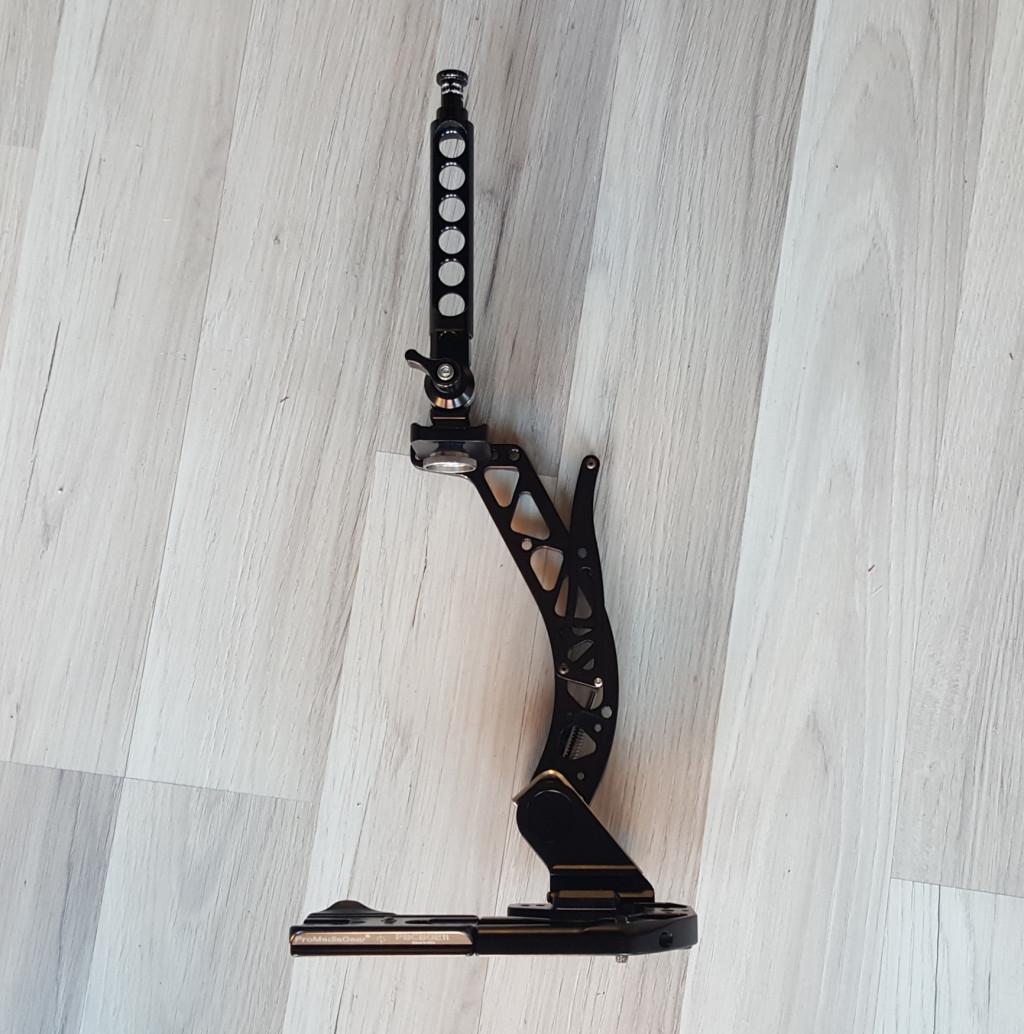 When I got the Boomerang arm, I was incredibly surprised by the build quality of the system. Constructed in the United States, the Boomerang arm is industrial and made from a single piece of steel. Quite frankly, it’s built better than my camera, my lights or anything else I own, giving me the certainty that it’ll mount everything without any issues. While it did come with some assembly required, it was fairly easy to set up, and extremely customizable with all the additional brackets and cold shoes it comes with. 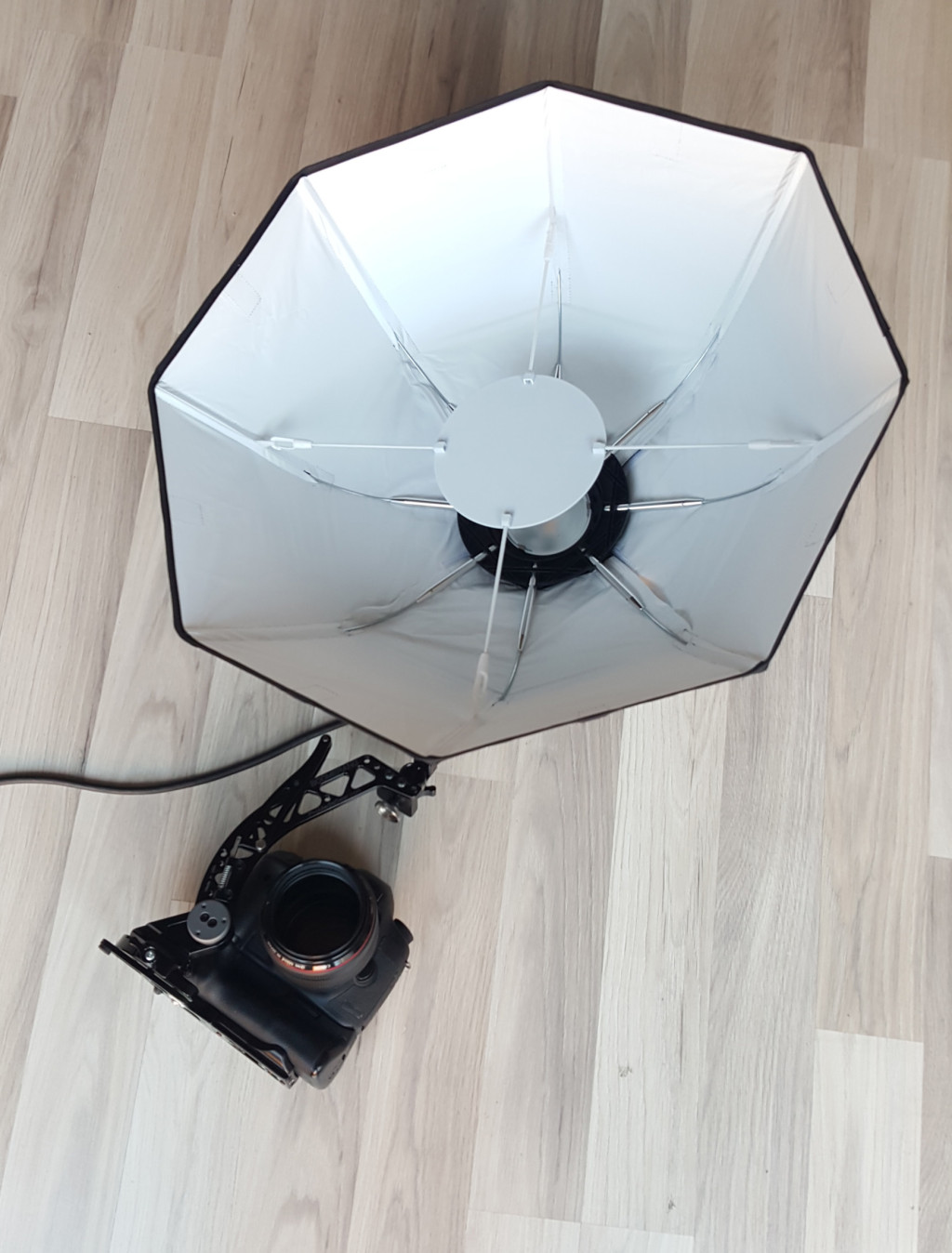 Alongside the unit is plenty of solidly constructed joints, allowing you to move the flash, and the camera system as needed. An arm on the “boomerang” portion of the unit allows your camera to shift from vertical orientation back to horizontal orientation using a spring loaded locking system. Alongside the ‘Boomerang arm” joint, the unit also comes with a mounting pole, and when attached to a swivel cold shoe, you’re able to move it left and right 180 degrees, giving you the ability to move the light off axis from the top of the camera, and give you wrapping effects on your subject.

Perhaps the biggest question I got from those who have seen this system on my personal social media accounts is the usability. While the Boomerang arm is designed to take this kind of weight, people are used to holding such a big rig in their arms. And that was my only issue with the system. While the Profoto Foldable Beauty Dish and B2 is lightweight, it’s still a lot of weight off axis from the body. Still, I was easily able to handle the rig for a 1-hour shoot on the Venice Boardwalk and got some really great results from it.

It’s also important to note, that this system isn’t exclusive to the Profoto B2 system. By mounting a flash trigger and flash to the cold shoe mount, you’re able to get plenty of diversity in terms of what lights you can and can’t use.

However, I like to keep my lights close to my subjects, so I couldn’t see this being a usable option on anything beyond the 50mm focal range. At 50mm it works well, but I imagine at 35mm or even 24mm, it’d be spectacular. Just be sure to keep the light out of frame. From time to time, based on my positioning, a 2FT Octabox would sit just on the edge of frame at 50mm. Certainly adjustments could be made to fix this, but it definitely felt like it was built with the 1.3′ square softbox Profoto has developed.

Perhaps the biggest downfall to the system is that it doesn’t come cheap. ProMediaGear is a company that doesn’t cut corners, and uses the highest quality tools to help build their products, and all of that costs money. At $350, the Boomerang arm is a little pricey but has the construction to really justify the product price.

The age old question always comes into place with something like this – why bother? My answer is always simple – because I like control. Some people prefer natural light photography and shoot that often for scenarios like this. While I have a special place in my heart for natural light, I still like to have control of where my light falls in conjunction with the background. Adding a little bit of fill light can change the dynamics of the image considerably, give you a nice beautiful color palette to work with, and plenty of contrast. As an example, here is a photo shot with and without the arm during a session — 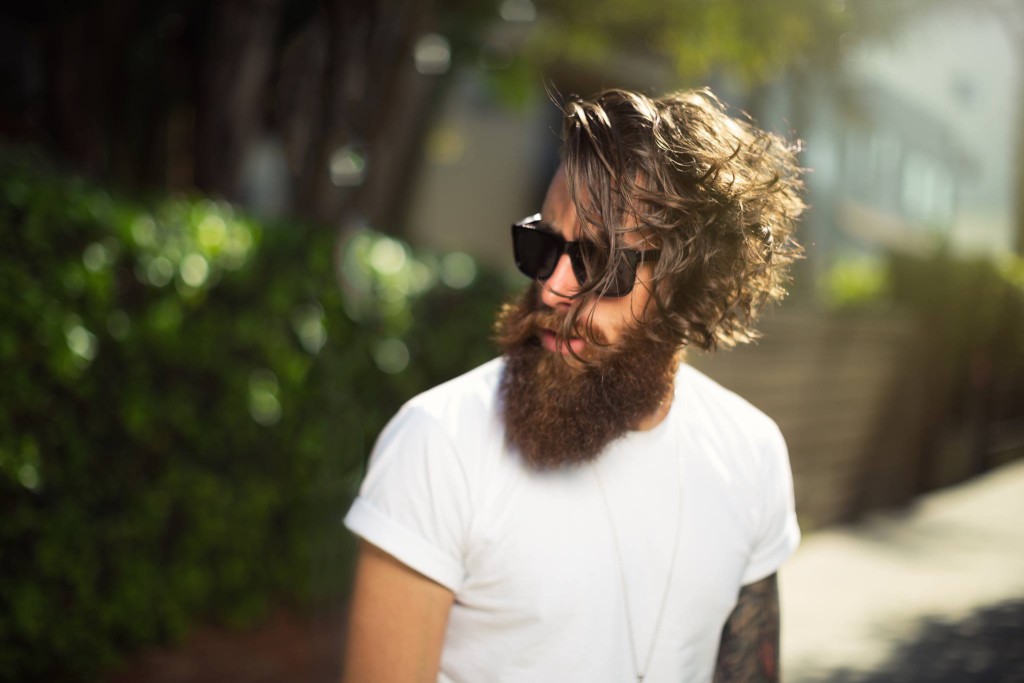 With Using the Boomerang Arm 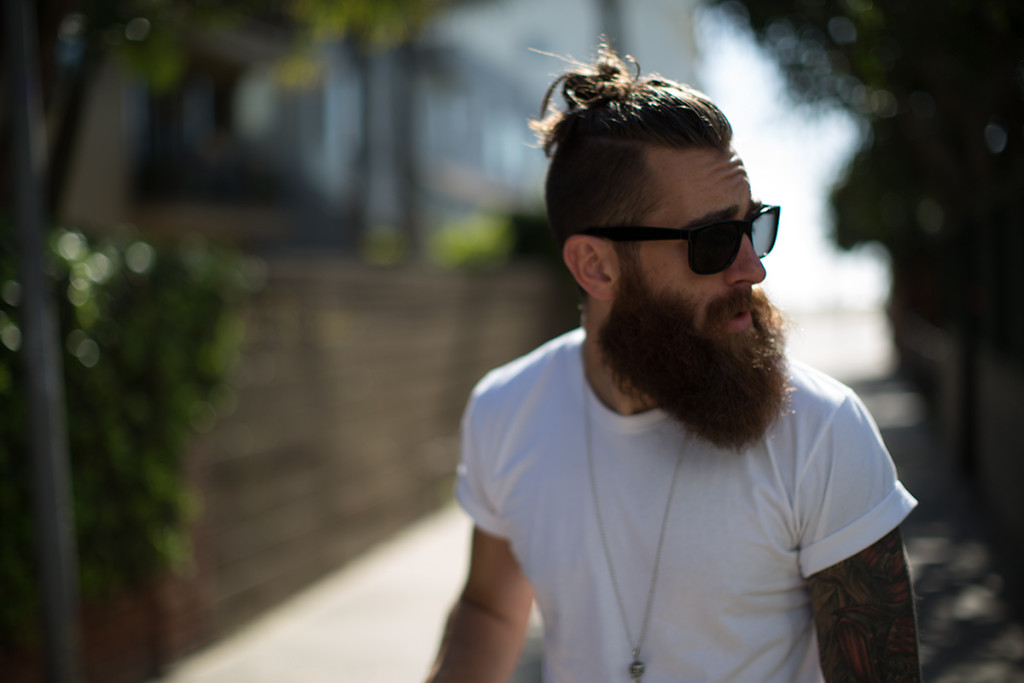 You’ll notice that with the light flash and boomerang arm in place, I’m able to get a nice wrap of light around my subject, which adds contrast and a lot of rich colors to the image, while still giving the natural light feel with the bokeh.

Does it work? Absolutely. During my shoot with my friend Trevor, we walked by many police officers patrolling the Venice Boardwalk. Not one of them stopped us to ask us questions or for a permit. While the system is a big bulky and cumbersome, it does it’s job well, and I intend on using it for future shoots as well.

ProMediaGear Boomerang Flash Bracket
Exceptional Build QualityGreat Usability and Functionality within the SystemA lot of Options in Terms of Setup
System can get Heavy and Cumbersome with Long UsePrice Point is a bit High for Most Users
8.9Overall Score
Build Quality10
Performance of Core Features8.8
Ease of Use9
Originality9.4
Price7.3
Reader Rating 59 Votes
4.3