DJI has announced the latest iteration of their latest man-held gimbal, the Ronin-MX. What’s the difference between it and the current Ronin and Ronin-M? Well, the Ronin-MX has been designed for use both in the sky and on the ground and communicates directly with the DJI A3 flight controller. The Ronin-MX can be mounted on the Matrice 600 (an all new hexocopter) in just minutes, so that you can easily go from shooting handheld to capturing footage from above. “The Ronin and Ronin-M are designed specifically for use on the ground and we do not recommend using them in the air.”

The Ronin-MX includes all the functionality of the Ronin and Ronin-M, i.e. Three Operation Modes, built-in receiver and remote control, and is also compatible with DJI Assistant 2 and DJI GO, for controlling gimbal settings.

The MX was built to resist high G-forces “using powerful motors and IMUs.” The Ronin-MX is engineered to maintain stability and hold horizon when mounted to an aircraft or a vehicle.

A slip ring allows the Ronin-MX to rotate 360° continuously when mounted to aircraft or vehicles, opening up more creative options. This is further enhanced by an increase in tilt axis range from 90° straight down and beyond to 135°. Popular features of the Ronin series such as the three modes of operation and SmoothTrack™ are also present, giving film makers a range of creative angles and movements.

A redesigned structure moves the Ronin-MX battery from the back to the front. This centers the weight of the camera, minimizing instability when flying directly forwards. It also dramatically increases the Ronin’s agility and ability to handle rapid movements or high-G situations.

Built extensively of lightweight magnesium, the Ronin-MX weighs just 6.11lb (2.77kg). This lightness allows it to be mounted to the M600 even when equipped with cameras as advanced as the RED EPIC, and to vehicles with a minimum impact on vehicle handling.

A combination of stronger motors and ESCs makes the Ronin-MX 50% more powerful than the Ronin-M. This additional stiffness and power allows the system to better withstand wind resistance when mounted to moving vehicles and aircraft, as well as more rapid movements.

Cameras such as the RED EPIC need an external battery for power. A dedicated position designed for an optional battery plate provides an easy, cable free mounting point for a 2nd DJI Intelligent Battery. This provides two 12V P-tap power sources for powering cameras and accessories.

Intelligent Ronin-MX batteries are compact, light and offer a long battery life of 3 hours. Multiple batteries can be easily brought to set for a full day of filming. Over-charge and over-depletion protection is built in, as is individual cell charge balancing. Remaining power is shown by clear LEDs and in the DJI GO app.

Additionally, DJI announced The Matrice 600 (M600), a “flying platform” hexocopter. It is is DJI’s newest flying platform designed for professional aerial photography and industrial applications. It is built to closely integrate with a host of powerful DJI technologies, including the A3 flight controller, Lightbridge 2 transmission system, Intelligent Batteries and Battery Management system, for maximum performance and quick setup. 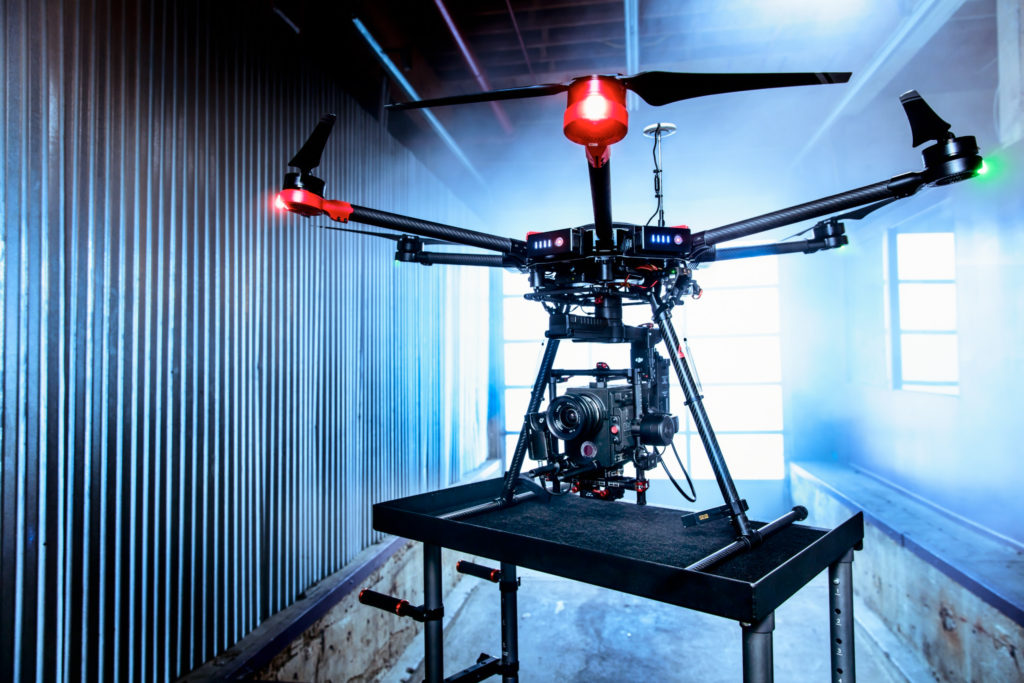 The modular design makes the M600 easy to set up and ready to use in just minutes. Its dust proof propulsion systems simplify maintenance while actively cooled motors make for reliable operation during extended periods of time. All Zenmuse cameras and gimbals are natively compatible, and a maximum payload of 6 kg allows it to fly the Ronin-MX gimbal and a range of cameras from Micro Four Thirds systems to the RED Epic. 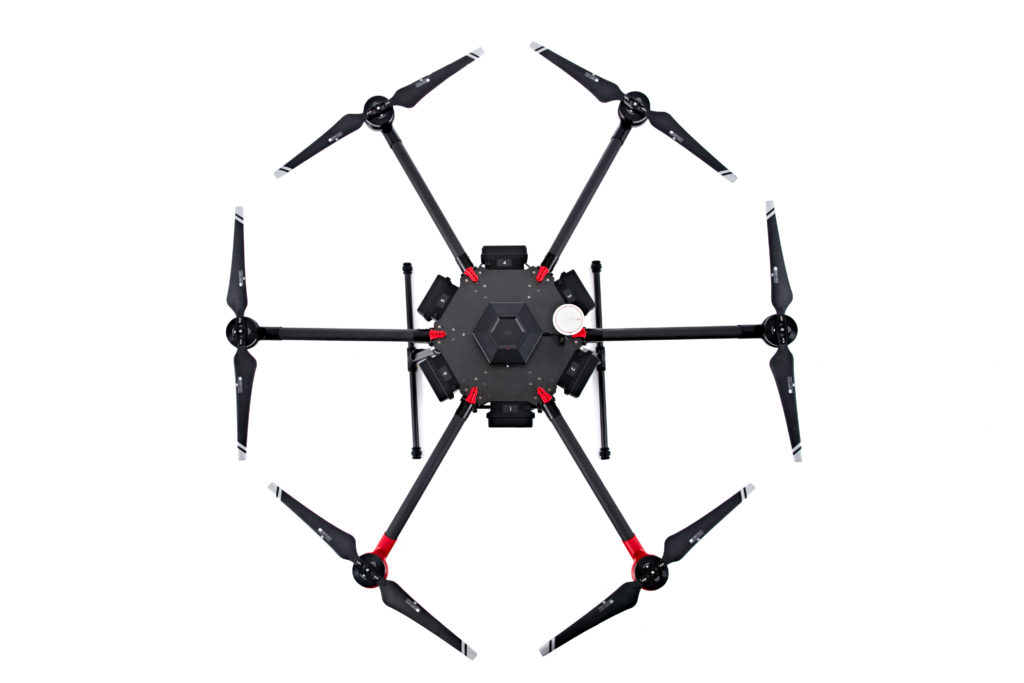 The M600 uses sine-wave driven, intelligent ESCs to ensure it performs accurately, safely and efficiently while A3’s self-adaptive flight systems adjust flight parameters automatically based on different payloads. The A3 can be upgraded with two additional GNSS and IMU units to A3 Pro or with D-RTK GNSS for enhanced accuracy. 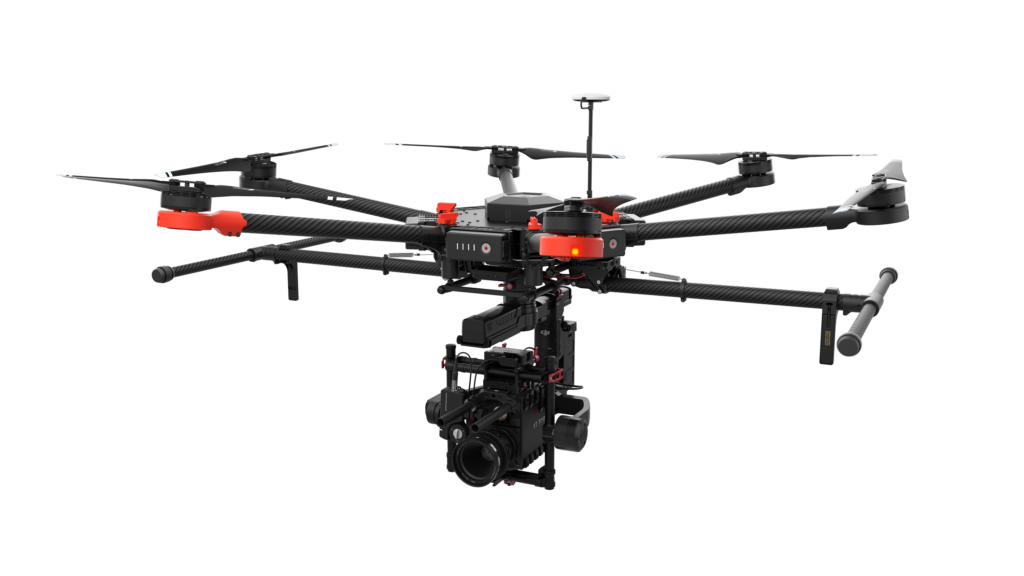 The M600 features an extended flight time and a 5 km long-range, ultra-low latency HD image transmission for accurate image composition and capture. The M600 uses 6 small DJI Intelligent Batteries, allowing it to easily be shipped to wherever it is needed. A customized battery management system and power distribution board allows all six batteries to be turned on with one button press, and keeps the system in flight in the event of a failure of a single battery, and allows users to check the battery status in real-time during flight.

Now, combined with the aforementioned Ronin MX, you have a stellar combo. The Ronin-MX has a built-in, independent IMU module, a Bluetooth module and a 2.4GHz receiver. It operates through the DJI GO app and has settings for SmoothTrack and gimbal-tuning for various cameras, including some of the RED series, DSLRs and other professional camera. It also operates in multiple modes, including aerial and car mount. 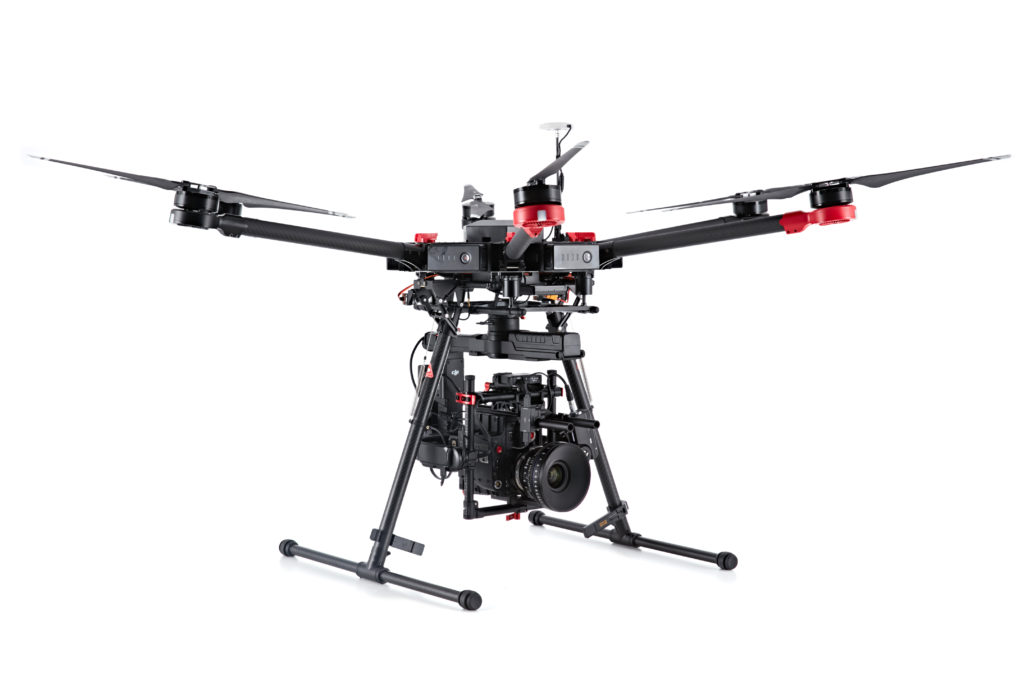 Mounted on the M600, the Ronin-MX’s CANBUS port allows all flight controller data to pass through to the Ronin-MX, meaning the gimbal is positionally aware and able to keep the horizon level. The Ronin-MX can pan 360 degrees, tilt +45 to -135 degrees and has redundant slip rings, offering enhanced reliability for operators. With an optional accessory, the Ronin-MX can transmit video real-time from a mounted camera, making full use of the M600’s Lightbridge 2 capabilities. It will also be compatible with the DJI Focus, through a wireless adapter mounted to the Focus remote.

The Ronin-MX is powered by a 4S Ronin-M battery. Third-party cameras mounted on the Ronin MX can be powered by an optional onboard DJI battery.

The Ronin MX is compatible with a wide range of cameras from Arri, Black Magic, Canon, Panasonic, RED, Sony and Nikon. Its maximum load weight is around 4.5 kilograms.