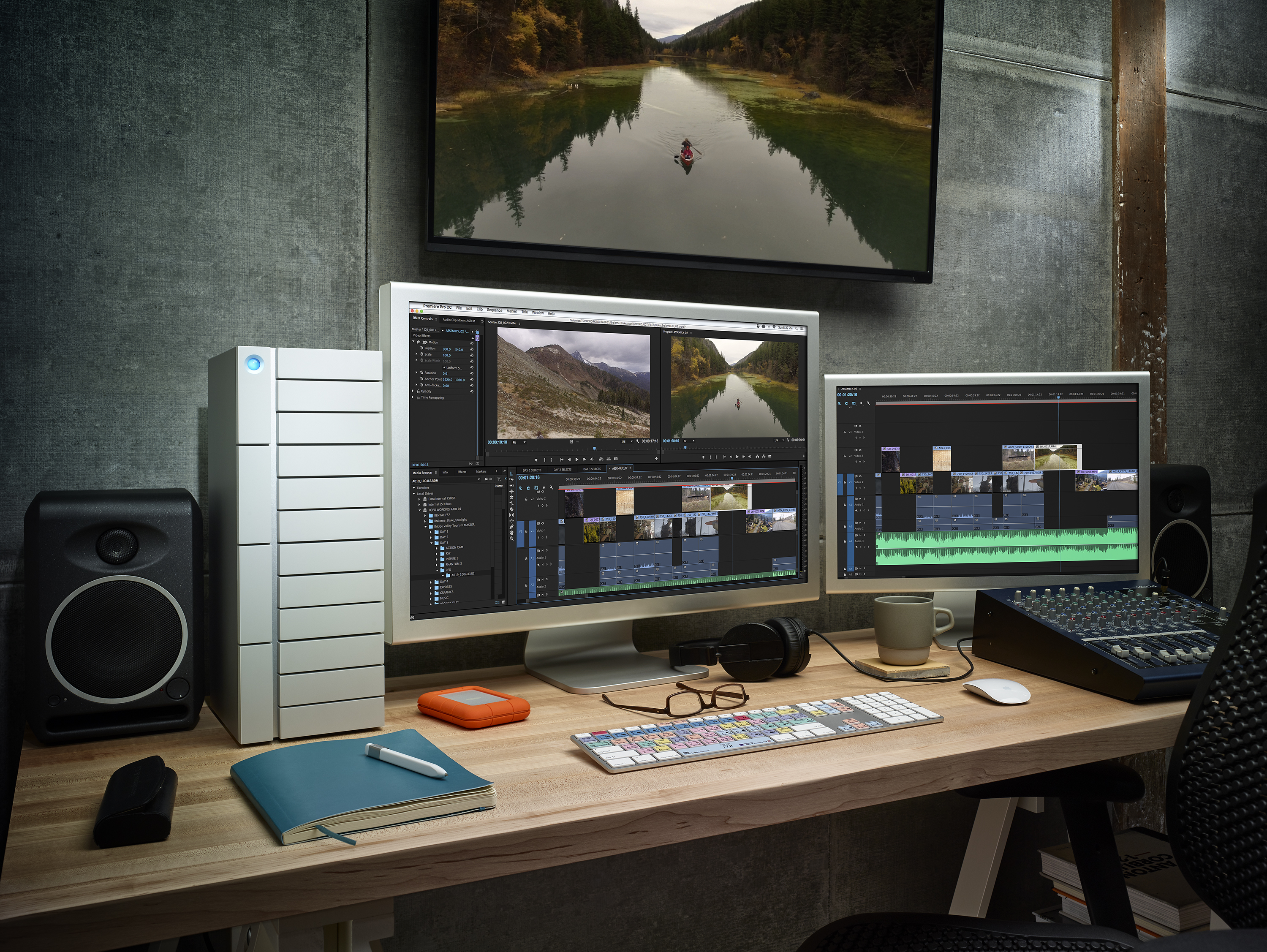 LaCie has always been my go-to for portable storage solutions (like the SD Rugged drive, for example), but it seems like they’re ready to leap ahead and offer one of the most impressive desktop storage solutions we’ve ever seen. Sporting the brand new Thunderbolt 3 and up to 96 terabytes of capacity with 2600MB/s speeds to edit 6K video, LaCie’s new 12big looks mighty impressive… and it’s footprint on your desk is no larger than a tablet. 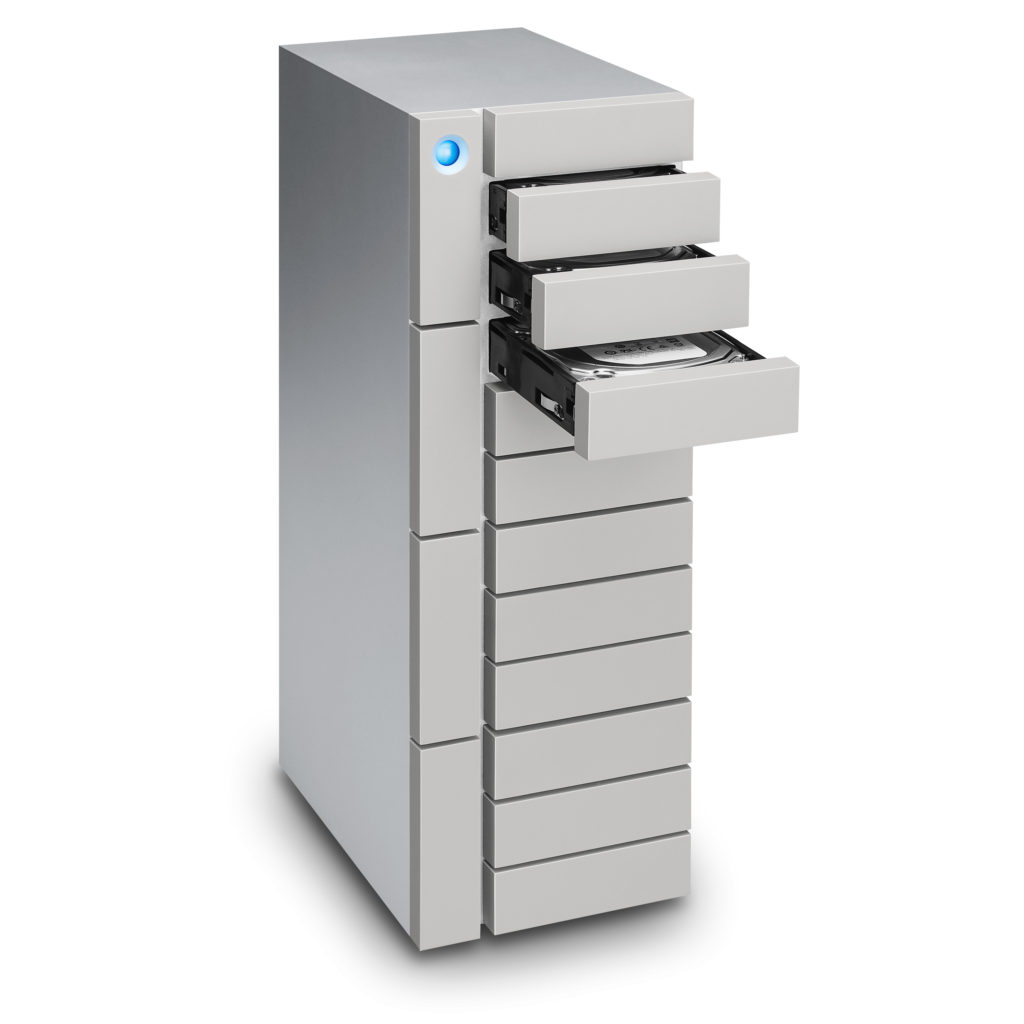 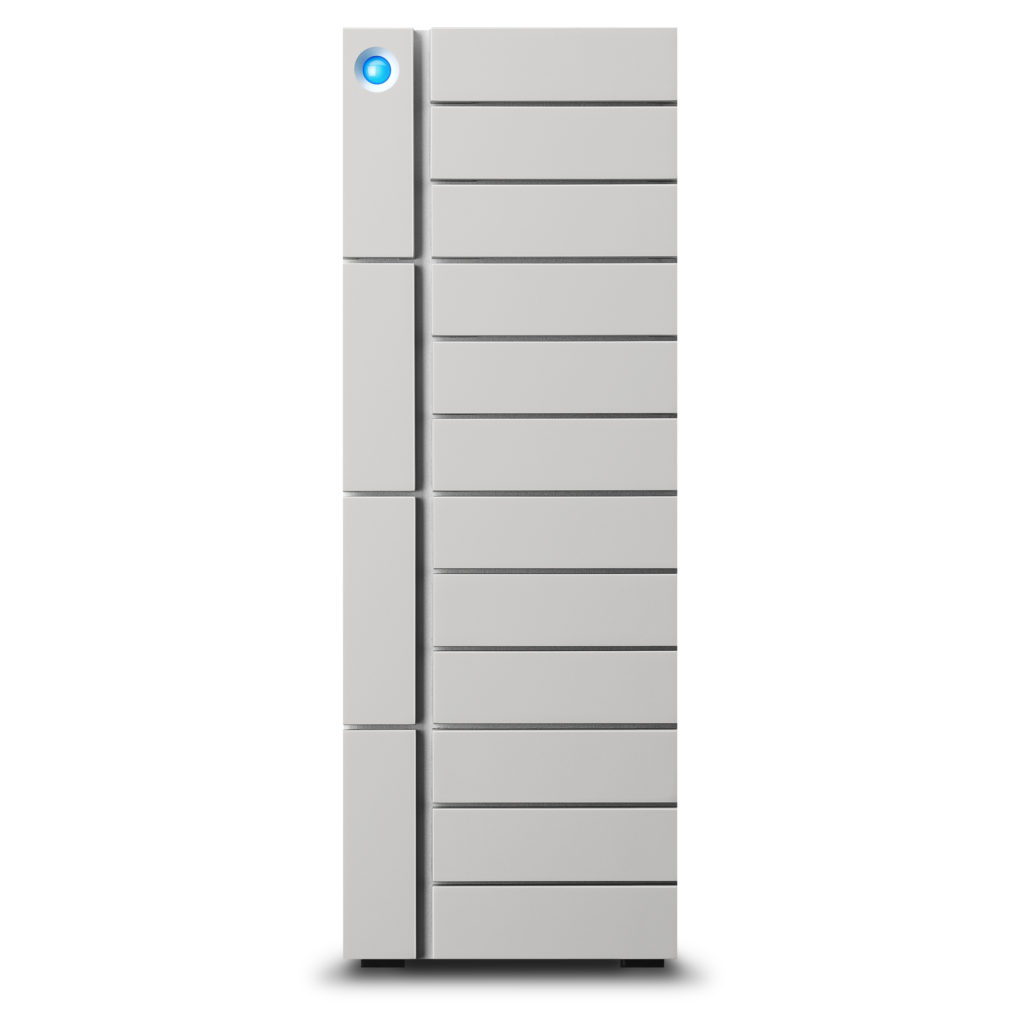 With up to 96TB of capacity, the breakthrough performance of Thunderbolt 3 and RAID 5/6, the LaCie 12big helps video professionals meet the data demands of 4/5/6K cameras. At up to 96TB, the LaCie 12big boasts a 50 percent higher capacity than any other desktop direct attached storage solution on the market—with a footprint smaller than a tablet. It features Seagate’s enterprise-class drives with a five-year limited warranty for extraordinary reliability and data availability to safely store and edit massive amounts of ultra hi-res footage.

For the 12big, LaCie harnessed the breakthrough performance potential of Thunderbolt 3 technology and squeezed the absolute best speeds out of the hard drives. LaCie added a hardware RAID controller and 7200RPM drives, and the result is record-breaking speeds of up to 2600MB/s (depending on how you have the disks arranged of course)—and 2400MB/s in RAID 5.

There are of course slim to no computers yet to utilize Thunderbolt 3, but the tech is backwards compatible with older versions. What that means is you can start using the 12big today, but you’ll be set for future systems for some time. It’s a forward thinking design, and I approve. What is also nice to know is that Thunderbolt 2 is already capable of some astonishing speeds, so you should still be able to get the max output of the 12big even on older systems.

With double the video bandwidth of its predecessor, Thunderbolt 3 lets the user daisy chain dual 4K displays or a single 5K display to the LaCie 12big. With two 4K displays, you spread out your workspace by dedicating one display to the timeline and the other to previewing 4K footage. It is even possible to provide power to a compatible laptop through the Thunderbolt 3 cable.

Also with the kind of speed you get with this array, the 12big is capable of streaming uncompressed HD 10-bit and 12-bit video into Premiere, Final cut and Avid with no hitches. For big projects packed with high-def clips, thumbnail and preview rendering becomes much more responsive. 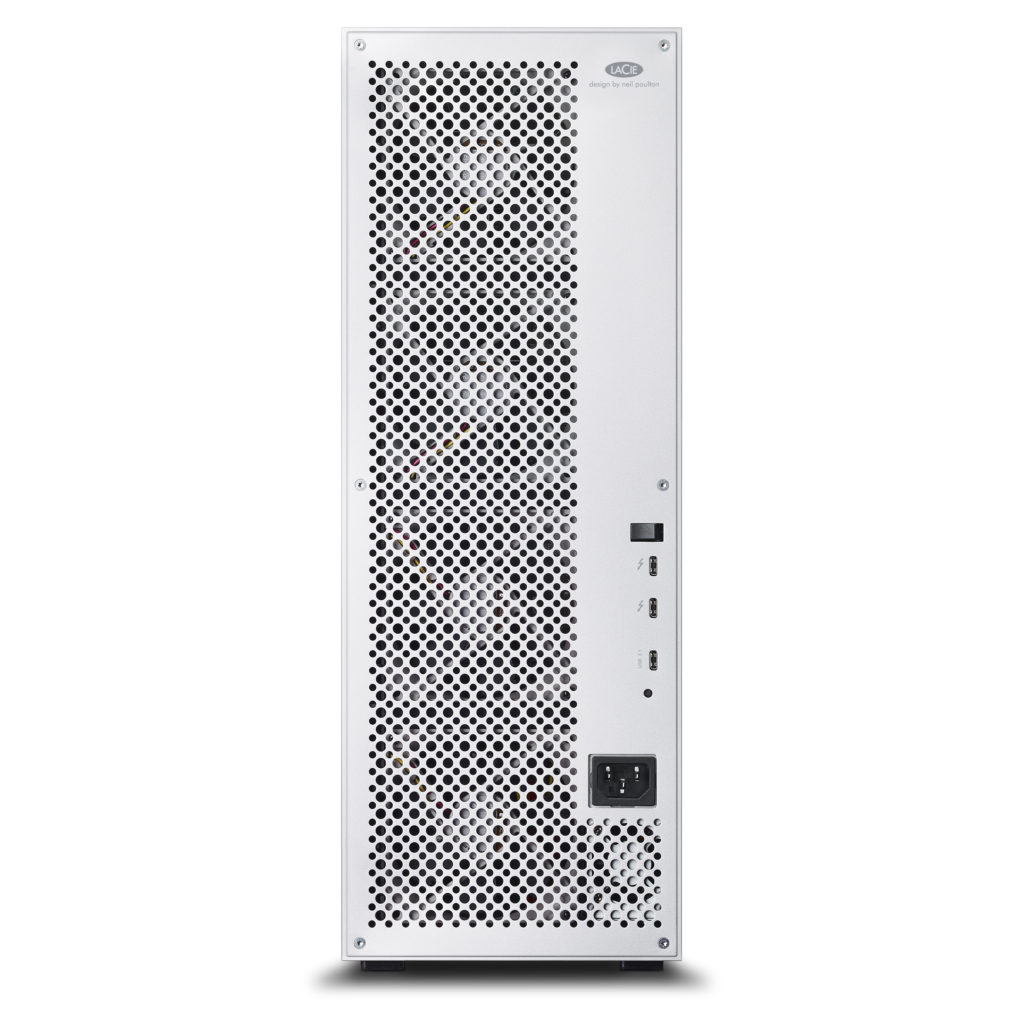 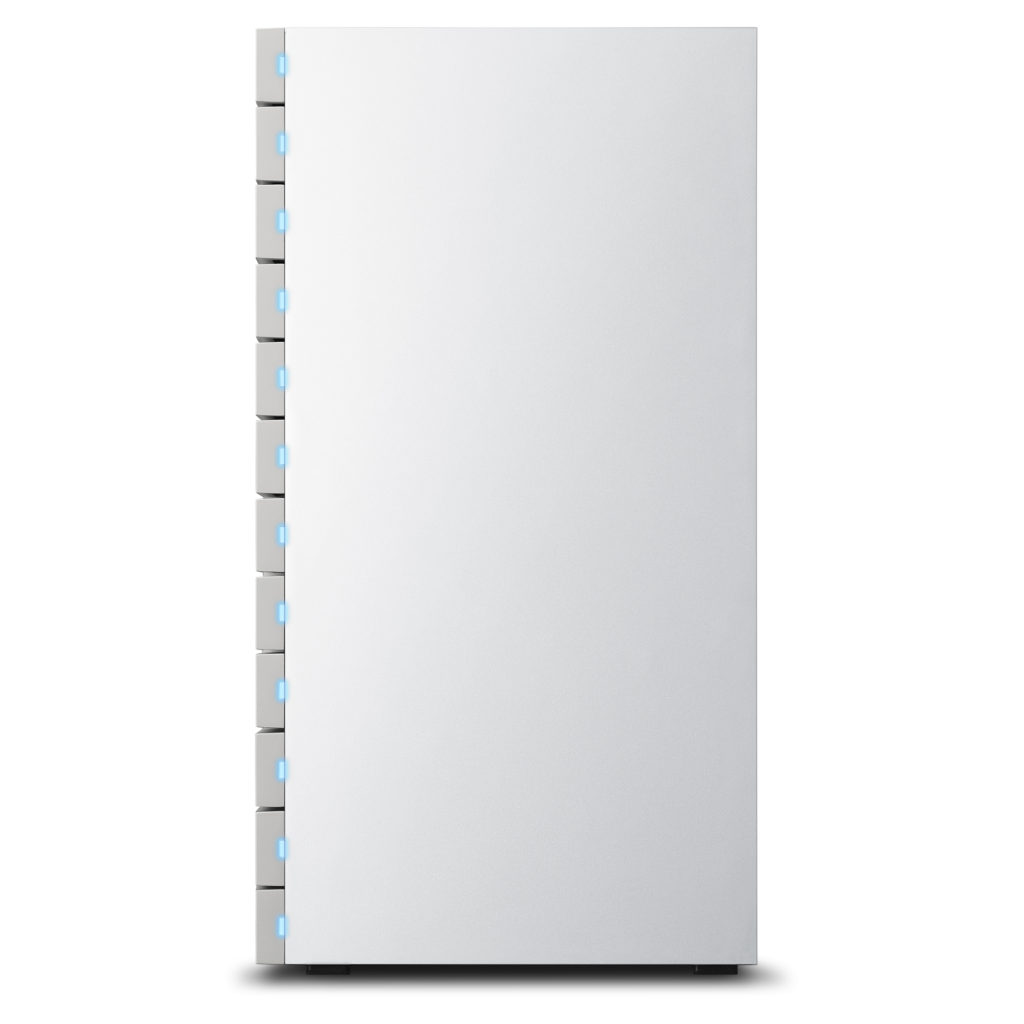 With up to 96TB of capacity, the LaCie 12big can store 100 hours of 4K ProRes 444 XQ footage in RAID 5?. With that capacity, it’s possible to store footage from 48 LaCie Rugged Thunderbolt 2TB shuttle drives. Instead of buying a new storage device every time more capacity is needed, LaCie recommends pros invest up front in a future-proof, RAID-protected solution. This consolidated approach improves data access and security, which can save money in the long term.

The LaCie 12big features 256MB cache, 7200RPM Seagate enterprise-class drives for superb accessibility, reliability and robust performance. Designed to operate 24×7 on 16-bay racks (instead of 8×5 operations for traditional hard drives), these HDDs are rated for 8760 hours of operation per year for extraordinary availability. The LaCie 12big also comes with a five-year limited warranty that covers drives, enclosure and spare parts.

The redesigned LaCie RAID Manager offers an intuitive interface to administer the LaCie 12big. A new and more user-friendly interface assists the user in setting up and monitoring storage. Wizards help easily create and manage volumes optimized for individual needs. Plus it offers advanced features such as CPU settings, auto rebuild, and drive diagnostics.

From the front of the product, drive status LEDs keep track of drive health and RAID build status, and drives can be conveniently accessed. Ensuring long-term component health, the aluminum enclosure dissipates heat efficiently and four thermoregulated fans pull heat away from the drives. And even if a fan fails, the product is still fully functional. For universal compatibility, users can connect to USB-C laptops—and even USB 3.0 computers via the included USB-C to USB-A cable.

No pricing on the 12big was released today, but the array will be available this summer in 48TB, 72TB and 96TB capacities.