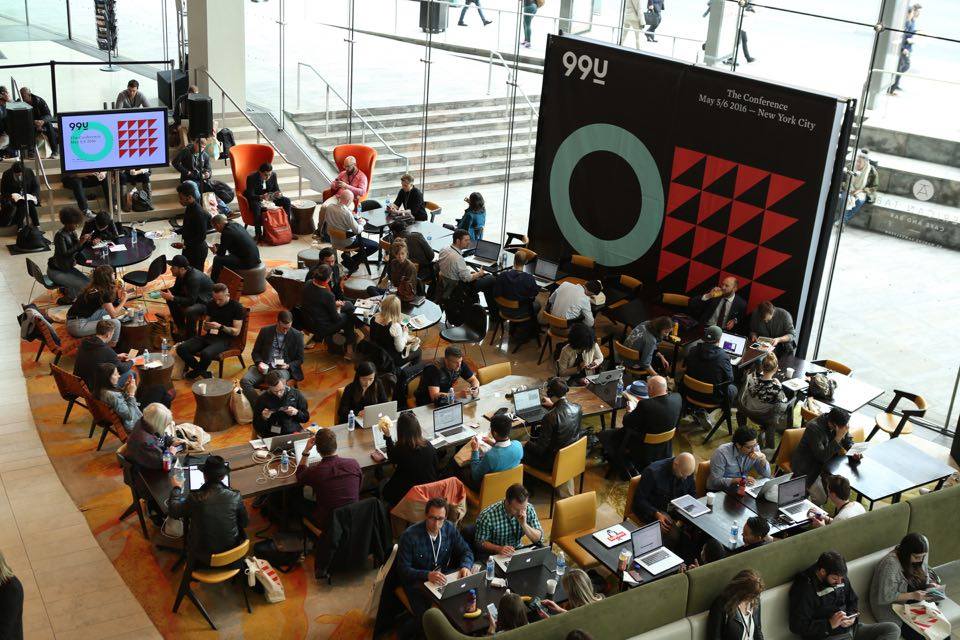 This year’s 99u Conference by Behance and Adobe was one for the books. Founded on the premise of Thomas Edison’s idea that creativity is 99 percent perspiration and 1 percent inspiration, the two day conference, held in New York, saw a sold out crowd of over 1,000 attendees from around the globe, determined to learn how to bring their ideas to life.

With a vast line up of speakers, from the Graphics Editor of the New York Times to the VP of Design at Buzzed, here are 99 things we learned from the 2016 99u conference.

98. There isn’t a peak to your life, there’s just now. So pay attention to where you’re at now so you can maximize as you go.

97. Carve out time on your calendar for things you want to do and plan them, otherwise they’re just ideas and they won’t happen.

96. No matter how much money you make or how much power you have, you can’t buy time.

95. Americans on average are working four more weeks per year since 1979. 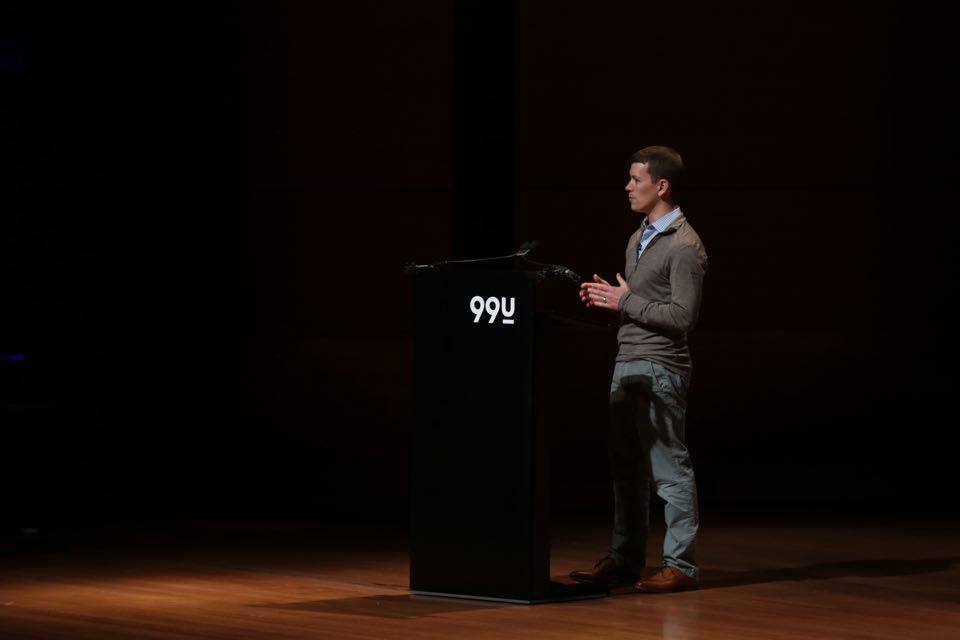 94. Inviting yourself to the table is the moment you decide to create opportunities without asking for permission or waiting on an invitation, and doing it once will build a positive cumulative effects over time.

93. Self-doubt is something every creator can relate to.

92. Welcome surprises and let go of the idea of a predetermined path towards success.

91. “…to the extent that the future is shaped by human action, it is not much use trying to predict it – it is much more useful to understand and work with the people who are engaged in the decisions and actions that bring it into existence.” – Saras Sarasvathy

90. Take a leap of faith and suspend disbelief—don’t think about how possible it is, just do it, and remove the uncertainty of what you have to offer.

89. Entrepreneurs view the future through effectual logic, meaning the future isn’t out there to be discovered, it’s created through the strategies of the players.

88. Prepare for moments of failure. Things won’t always work out the way you want them to.

87. “Find your superpower and put it to work.” – Tina Roth Eisenberg

86. “The wronger something feels the righter it is.” – Jerry Seinfeld 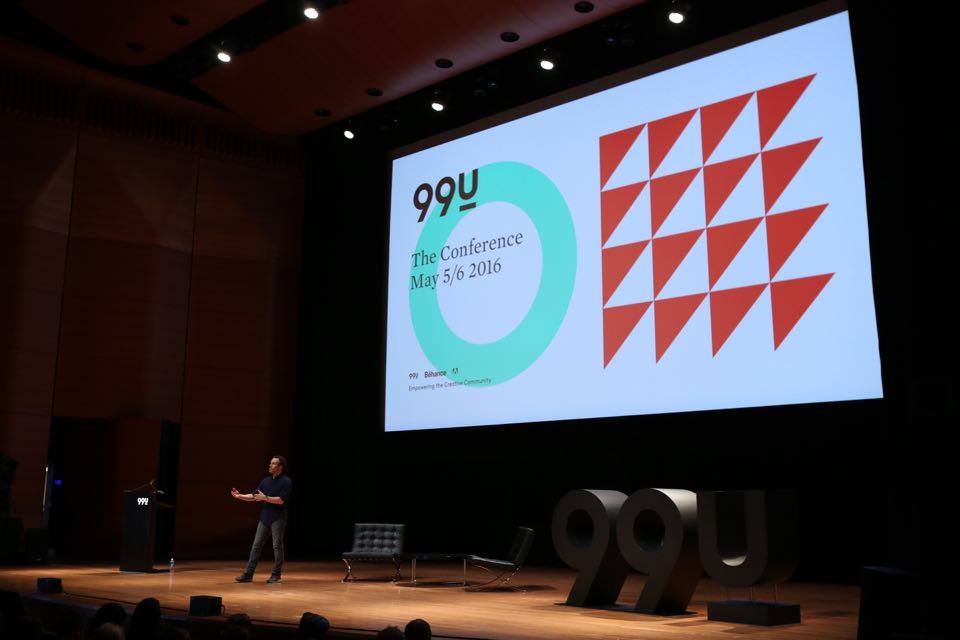 Jason Fried, founder of Basecamp, speaks to the sold-out crowd about reinventing your career. © Mackler Studios for Adobe.

85. Creative destruction is finding something you’re really comfortable with and blowing it up. It’s important because the easiest thing to become is comfortable and complacent.

84. The more you protect your complacency and comfort, the more rigid it becomes, and the harder it is to be creative.

83. “You don’t have to do things the way other people do them—the best advice you can give someone is ‘don’t be like me.'”

82. When you’ve hit your local maximum it means you’ve optimized something so much that you can’t make big leaps anymore.

80. A forced change in the way you work creates moments where you can come back and look at something fresh or see it differently.

79. “Fall madly out of love with something you’re used to doing, and look for opportunities in the things you do to blow them up and start all over again.”

78. Unpaid internships are for exploratory failure.

77. You’re 200 times more likely to find a job candidate if you’re willing to invest in their growth and education, rather than hiring someone who is qualified right now.

76. Investing in young talent is about half as expensive as hiring existing talent.

75. It only takes 12 minutes per day over nine months to develop an apprentice’s skills to the level you want to hire.

74. Gender diverse companies are 15 percent more likely to make a profit than those that are non-diverse.

73. Ethnically diverse companies are 35 percent more likely to make a profit than those that are non-diverse. 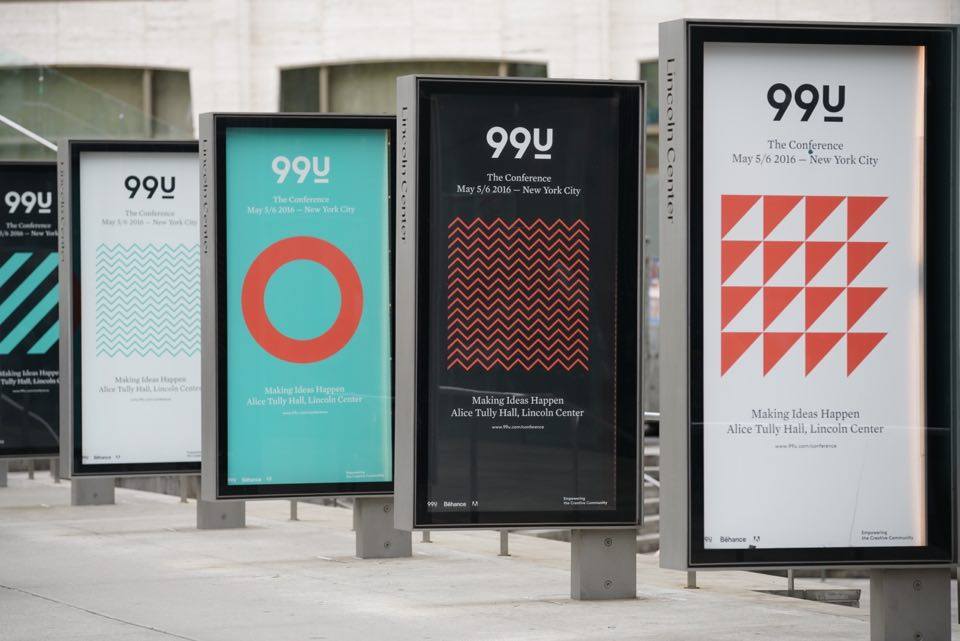 71. To people who don’t think about themselves as leaders, leadership seems like a lot of work.

70. You don’t have to identify as your job title.

69. Your identity is not your work, it’s what you’re strengths are.

68. Most of us learn everything about leadership from television and movies.

67. Movies tell people that being a leader is about survival, while the leader is always an outsider. This is where movies are typically right.

65. Here are three principles of leadership: know thyself, know the what and why of it all, and DBAB (Don’t be a dick).

64. Understand the lens through which you lead—entitlement, similarities, otherness, etc.

63. As an “other,” it is important to become fluent in other cultures’ experiences and coded languages.

62. Know your character defects and assets because you bring them to the table wherever you go.

61. Understand the what and the why: Why are you doing this and what are you doing here? Because the best leaders have deep reasons for accomplishing their tasks.

60. Theres a delicate balance between opting out of being nice and being a dick.

59. “Be kind, for everyone you meet is fighting their own battle.” – Plato

58. As a team leader, you are ultimately responsible for the atmosphere of the team. 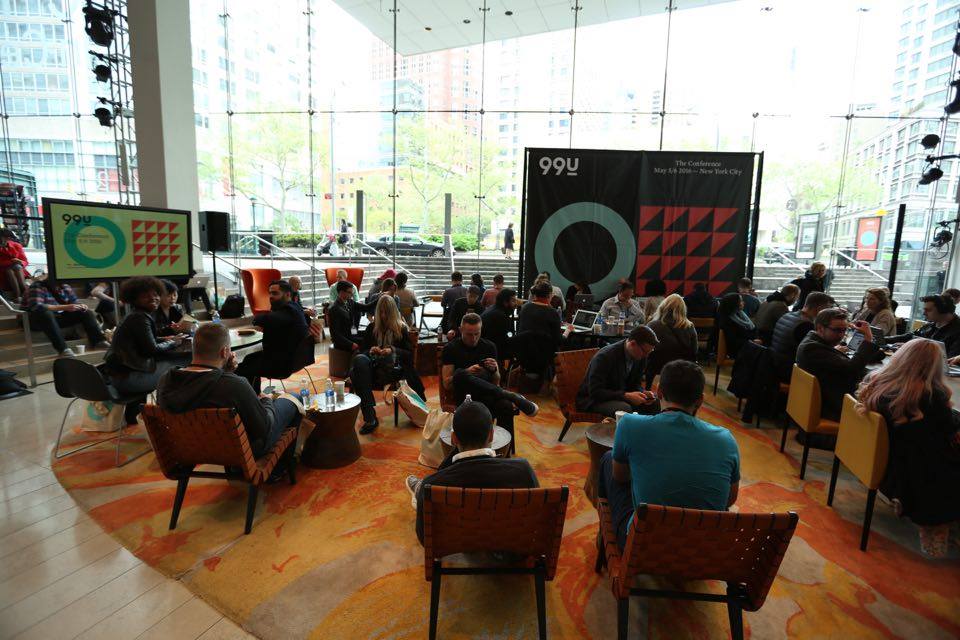 99U Attendees network between sessions at Alice Tully Hall. © Mackler Studios for Adobe.

57. When you really need to make money, the money section of your brain expands.

56. There’s no good time to have a child, but babies make for really great content. Umm..

55. Being a parent is like being a designer—you think you’ll be good but you really suck, and there’s no real science behind it.

54. People who explain the ‘rules of design’ are really just trying to make money.

53. The failure of others is an excellent motivator.

52. Everyone thinks that everyone else’s life is better than their own—and everyone wants to look perfect.

51. Designers treat failure like Medusa: instead of staring it in the eye they avoid it.

50. Rather than trying to seem perfect, we fetishize failure instead.

49. The stakes are lower when you broadcast your insecurities, rather than try to hide them.

48. You have to figure out the lines between life and work for yourself, because your work won’t do it for you.

47. Honesty is a privilege not a right. And garbage people are, apparently, among us!

46. All the beautiful photos online are ruining our brains much more than the terrible ones.

45. Design communities are more effective when they show both design failures and triumph, yet the terrible things we see online are challenging our brains much more than the beautiful ones.

44. Most people don’t want an audience for their true failures.

43. Take responsibility for your failure but don’t make it personal.

42. Most good magazine art direction is about the strength of the ideas, not the design itself.

41. Don’t innovate for innovation’s sake, only do it when it’s necessary for the work.

40. Accept that you are in service to something greater than yourself.

39. People see their careers as linear, but looking at it like a web is far more effective.

38. Don’t be afraid of people thinking you can’t do it all because you can’t, and they can’t either. 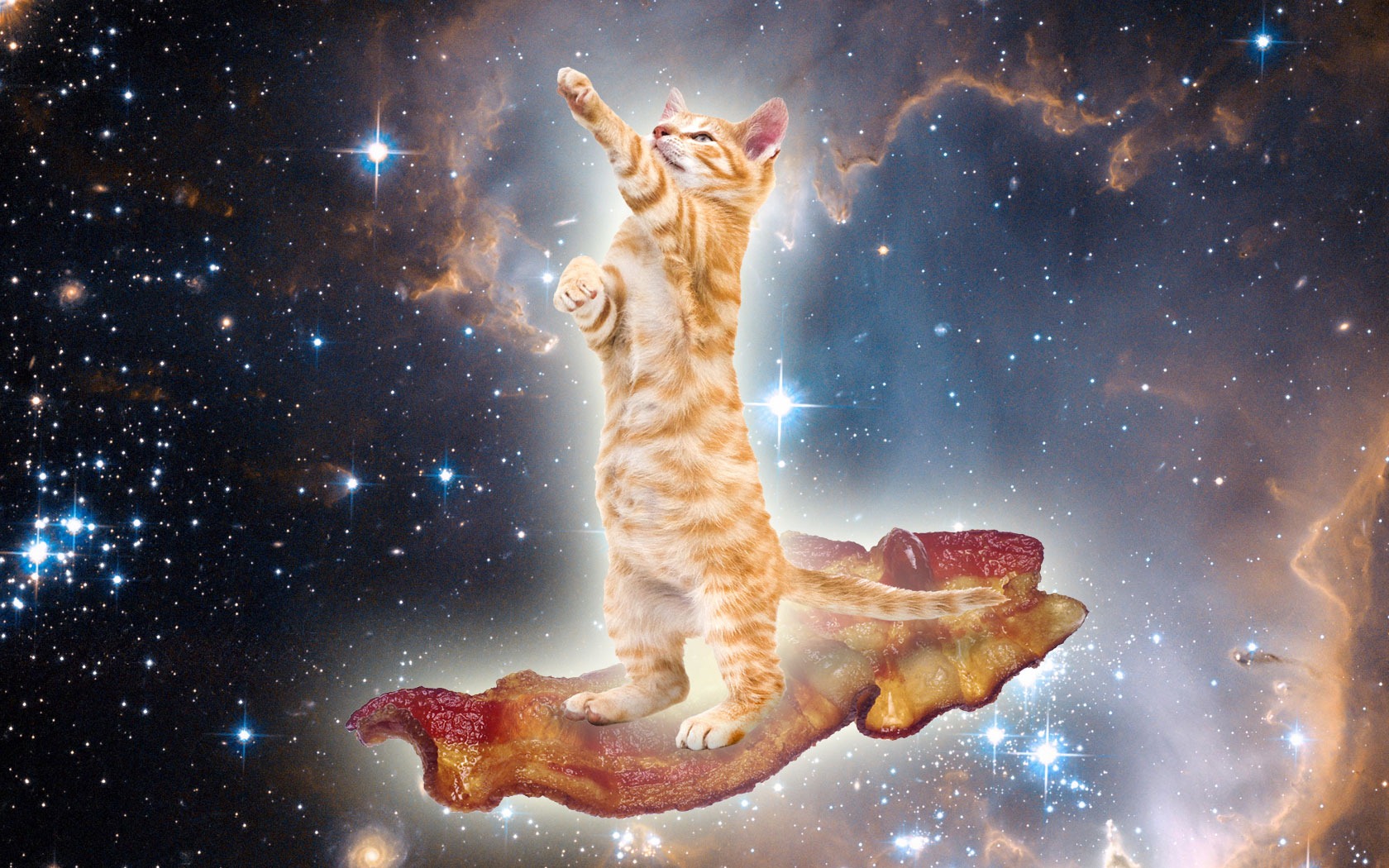 37. “If this cat can ride bacon through space we can do anything.”

36. Most designers struggle getting respect because people don’t respect design.

35. The first thing a designer should do in a design meeting is set a goal. But realistically, design can’t make all the decisions in a project.

34. The best products have tech, engineers, management, finance, design, all of which should be happening together.

33. Knowing where you want to go is helpful because then you will know when you get there.

31. Designers and coders need to help each other out if they expect to improve their skills.

30. If you get caught up in the present you’ll never move onto the future.

29. Try out the “fucks given system’: In an argument, compare how many fucks you give and whoever gives more gets their way.

28. Changing your company’s culture to be collaborative takes time, but it’s worth it.

27. You don’t always have to make small steps towards a goal, and it’s important to be able to recognize when you can just jump to the end.

26. Leadership is not a title, anyone at any level can be a leader. And if you create change locally then larger change will come. 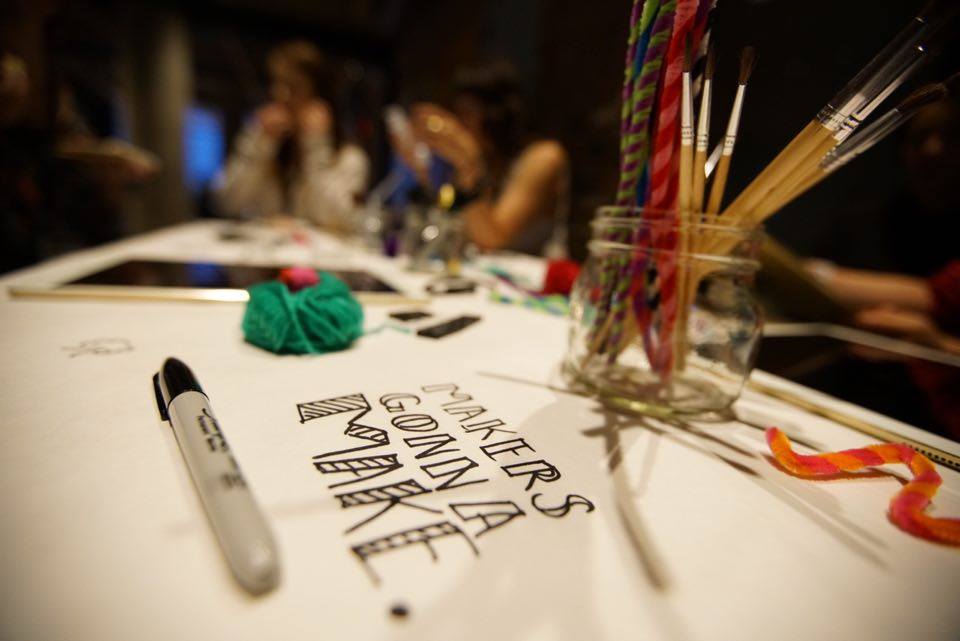 The conference kicked off with a pre-party at The Vine, which featured games, networking and product demos. © Mackler Studios for Adobe.

25. Your first career decision should be knowing what kind of artist you want to be and having a clear vision of it.

24. Do you want to be a ‘pop star’ type or an ‘original’ type? The pop star makes more money, but the original has more respect and freedom—and you can’t be both.

23. Once you become a pro, stop gaining influence from other people in your field.

22. Students should copy who they love, but stop once they become professionals.

21. Don’t choose anyone from your own specific field as an example of who you want to be, because you’ll end up as a copy and will have nothing unique to offer.

20. Learn to say no—don’t take a project if it will take away your sleep.

19. There are always other people who want the jobs you don’t want.

18. You have to be fair to your audience and yourself, and don’t take a job the audience wouldn’t want you for.

17. Recommending your peers for jobs you don’t want or can’t do is almost as good as taking it yourself.

16. What you show in your portfolio decides the kind of jobs you will get, so show your personal work if you want to work on things that actually matter to you.

15. Some tips: Write a detailed essay about an ideal day exactly five years from now. People tend to work as hard as their goal demands, so set your goal high to make yourself work harder. Take a risk every day.

14. Spend five to 10 percent of your time at work doing something you have never done at work before.

13. If you hate your old work, it means you’re on the right track.

12. Sometimes taking charity work, low budget work, or no pay work is good because you have more creative freedom.

11. Often, no pay can even give you complete creative freedom. If someone is trying to get you to make something you don’t like, you don’t have to do it.

10. If you bitch to your friend about a work-related problem and your anger goes away, then you don’t have to worry about it. But if it still makes you mad after bitching, then it’s important to resolve. 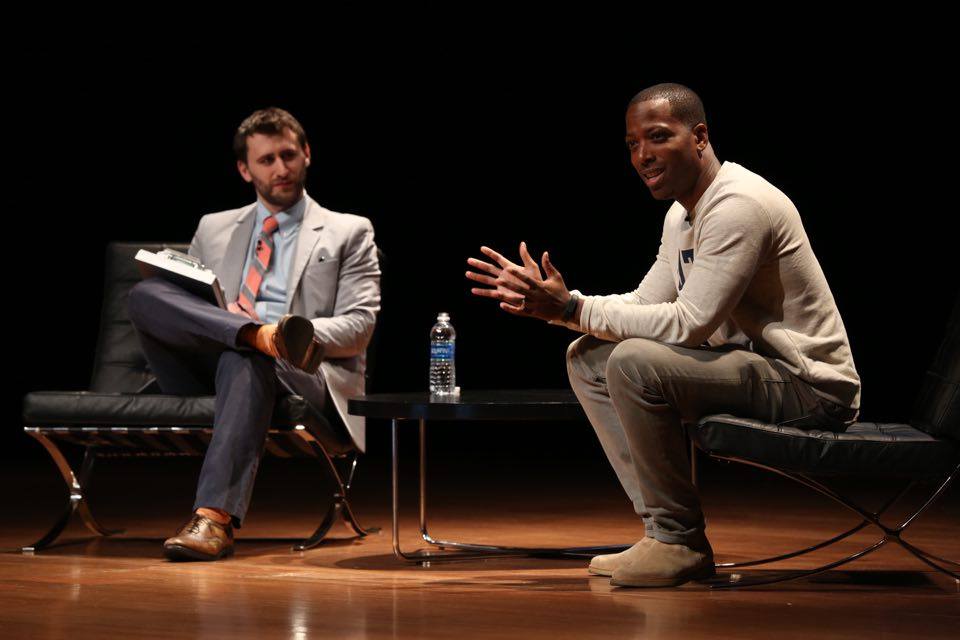 Sean Blanda, Director of 99U, facilitates an on-stage conversation with Tristan Walker, CEO and founder of Walker & Co. © Mackler Studios for Adobe

9. Everyone goes through an initial phase where there’s a gap between their work and their taste, and the only way to close that gap is to just do a ton of work.

8. Typefaces are solutions to cultural, tech, and science problems, and we need them because we always have new problems.

7. For artists, questions and answers aren’t dependent on one another—they can exist independently.

6. A structure describes itself most eloquently when it falls apart, and you learn a lot more from taking the radio apart if it’s on.

5. If you only look at good work, you’ll only learn how to make good work. If you look at bad work, you’ll learn all the same lessons without the bias towards one style.

4. If you only think about what you want to avoid, it gives you more freedom to pursue the work you want to be creating.

3. Collect answers and you’ll eventually find questions—and you’ll be glad you have the answers. And if you’re trying to solve a problem, first think about how you can make the problem worse.

1. Break things and create a mess, because it will teach you how to piece together the solutions.

Check out our coverage from last year for our initial 99 takeaways, and to discover how the creative world has evolved since then.