Adobe officially unveiled their major Photoshop CC update for 2016 earlier today and headlining an impressive docket of improvements is none other than the content-aware crop feature that they teased a while back. These updates could not come at a better time for Adobe either, with all of the competing products (mainly LR competition really) in the last 6 months, a strong showing in today’s announcements go a long way towards reminding everyone why Adobe is where they are in the first place.

Ok, So You Suck At Composition…

I won’t go too far into the content-aware crop feature since we already covered Adobe’s teaser of it back when they first made that feature public. (If you want, you can read that coverage here)

I do have some things I wanted to note about this feature though that Adobe made sure to point out in the press conference that I was a part of. As many people mentioned, you could technically do what this feature is doing already, just manually. Adobe admitted this much, but they said that they have made alterations to the algorithm of this specific feature to make it better suited for frame correction in this situation. According to Adobe, you should get better results using the automatic content-aware crop tool than you would if you were to crop and then use content-aware fill manually.

Plus, I don’t know about you, but I am always looking for ways to shave time off my regular post-processing timeline. So if this tool does what I used to have to do manually, completely automatically, AND does a better job of it, then I see no reason to bother with the manual route going forward.

This is the tool for all of you out there that get back to your office and realize that you suck at composition. Assuming your foreground and background are not too busy this tool can help you adjust your frame and fix your composition with little to no effort.

Just to wrap up my thoughts on this feature quickly in regards to its performance. As with all content-aware features, there is a short pause after you click the button while the software analyses your image and figures out what it is going to do. But for the most part, the process itself is fairly quick, even with full res files from my Fujifilm X-Pro 2. It is also surprisingly good at its job, though not perfect. It can hiccup with areas of lots of crazy detail and pattern, but for most uses where you will be taking advantage of this (corners, far edges of a frame) it is almost flawless — in my opinion anyway.

But that is enough about that. So much for not getting too far into it. Let’s talk about some of the other exciting additions.

Annie With The Resting Bitch Face

We have all had that client who just couldn’t smile naturally or that shot where everything looked great except that one droopy eyelid. In the past, you would have either had to scrap the shot, or spend way too long trying to push some pixels with the Liquify tool. Well, Adobe has heard our silent prayers and answered them with some seriously awesome new ‘Face-Aware’ technology for the Liquify tool.

Basically, this new technology allows photoshop to detect facial features like the head, eyes, mouth and then make them easily editable to you via Lightroom-style sliders in the Liquify tool. The process is faster and the results are much more controllable than trying to do liquify all manually. A really awesome side-effect of this feature is the ability to create hilarious caricatures in just a few moments. Honestly, this tool is just asking to abuse your office mates headshots and facebook profile pics… 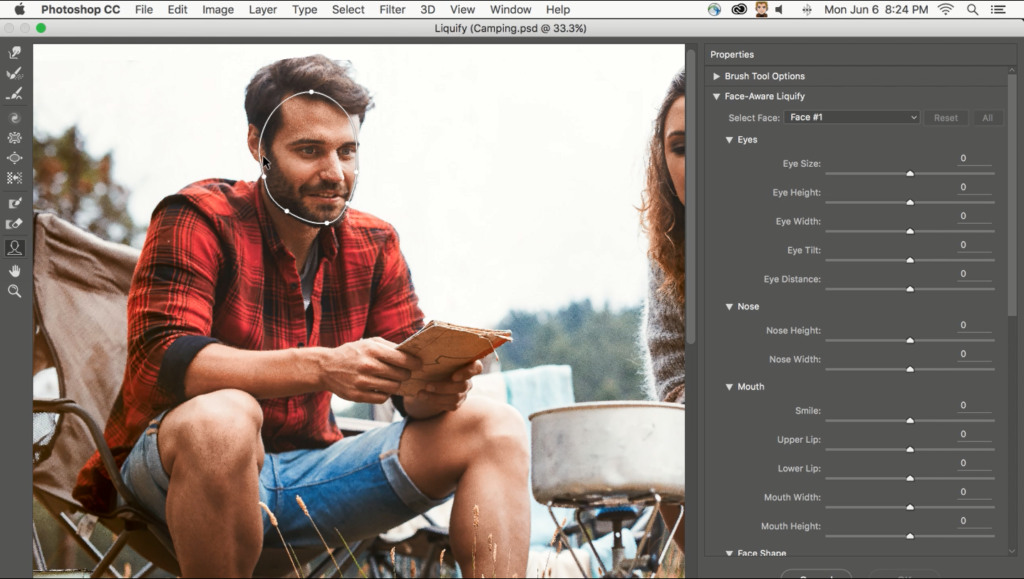 Additionally, Adobe has made some great strides in regards to selection and masking. If you have every tried to select hair that was anything put perfectly styled (and even then), you know the nightmare that it could be. Adobe’s new Improvements to the selection and masking interface makes this now easier and more accurate than ever.

Adobe demonstrated this for us in their presser, and it was rather impressive. Individual hairs and flyaways were selected better than I have ever seen, and gaps in the hair, where the background was showing through, were handled incredibly well on top of that. Anyone who has to deal with background replacement on a regular basis is going to absolutely lose their shit over this update.

But that is not all

These are just the major Photoshop feature upgrades. That doesn’t even touch on the performance improvements that Adobe has promised and the other updates to the rest of the Creative Cloud ecosystem.

If you are interested in learning more about the full range of Creative Cloud CC updates you can find all of that information over on Adobe’s website, here.