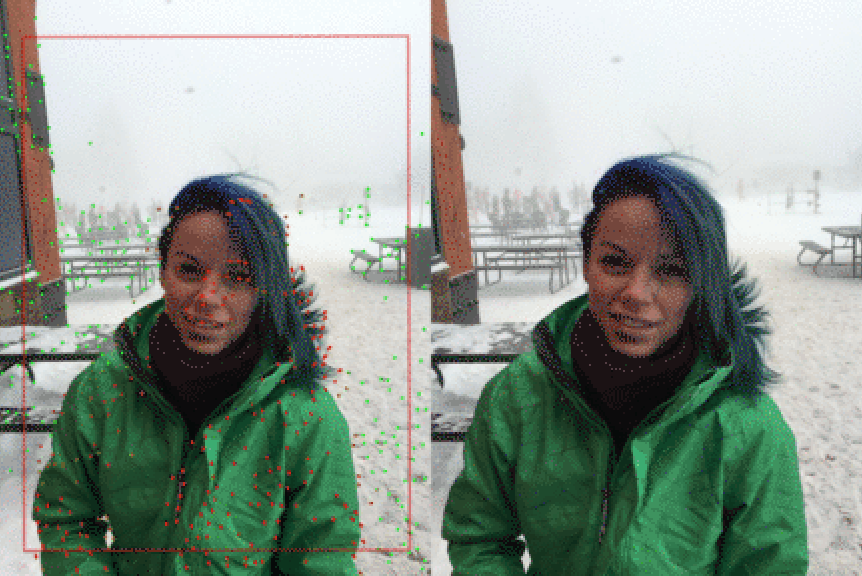 The simplest way of explaining how it works is as follows: They’ve engineered some handy dandy stabilization tech in the form of a very intricate algorithm, and this algorithm determines a new virtual camera path. The background is frozen or used as a magical sweeping backdrop, while the foreground is rooted to remove all that nasty shaking that Live Photos tend to have. Dismantling the components of each Live Photos burst, Motion Stills will create a new “best fit” with the algorithms instructions and, presto, a new GIF or movie file is born.

Even an earthquake may not be enough to baffle Motion Stills. Built upon GPU rendering similar to that of video games, it separates foreground elements as red and background elements as green. The app then initiates a “Cascade of motion models” in which it judges the vector of each detected element based on its direction. It looks a little something like this:

It doesn’t stop with sublime stabilization; Motion Stills has a few other tricks up its sleeve. After it has breezed through your Live Photos file and gift wrapped you a new GIF or movie file, complete with an optimized looping point and sound, it is then easy to share your magical moment across social media platforms. You can now upload that backflip you’ve definitely been working on straight to Instagram, something Live Photos couldn’t do on its own.

The cherry on top is that it needs no internet connection to function and is happy to retroactively rummage around your old Live Photos files… Something to play with on the subway, on the slopes, at the park, the middle of the ocean, the desert, GIFs all over the place. Currently Motion Stills is only available for iOS but that makes sense as it’s aimed at the iPhone 6S. It is a new venture and, based on the feedback they get, Google are looking to combine it with existing products in the future such as Google Photos. So go forth and #motionstills.