Instagram Makes Official What We Have All Seen Coming, Business Accounts Are Here

Instagram confirmed a lot of speculation and rumors with their official announcement of what they are calling ‘Business Tools,” and as the name suggests, these tools are aimed at helping businesses get the most out of Instagram.

Starting from the top, we have new business profiles, which will include a new button allowing potential customers to directly contact the business through the business’s preferred method. This alone is huge, and incredibly exciting for businesses as previously they have had to waste space in their profile to list that information out.

The new business profiles will be free and all one has to do to get one (once they roll out) is change a setting in their Instagram account that will convert their account to a business account. 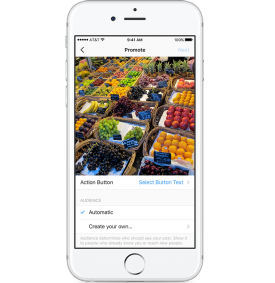 Instagram had already previously introduced Insights, but those got another overview today as businesses will have the ability to learn more about their followers, and get a better idea of how to produce content for them.

The next final feature announced was ‘Promote’, an easy way for Instagram business accounts to turn a post into an advertisement. Once a post is selected the business owner has the ability to add a button to it that users will be able to use to perform an action. They did not specify what sort of actions businesses would be able to have users take, but a few a hypothetical action could be visiting a website, downloading an app, or redeeming a coupon/code.

This is essentially Instagram’s implementation of Facebook’s infamous ‘Boosted Posts’ functionality, with the added ‘button’ functionality. In my opinion, I think this is actually pretty ingenious. Simply having businesses pay to have their ad show up in more feeds would have been too simple, adding the button functionality brings an added value to the business ad that the business did not have access to previously. It’s less about getting your content seen by more people, and more about allowing those people who see if to be able to easily do something about your call to action should they choose to.

Many businesses will still scoff at the idea of having to pay anything. But I give Instagram credit for bringing added value to the feature and am curious to see how the system works once it is all rolled out.

Instagram says the new features will be rolling out in the US, Australia and New Zealand in the coming months, and will be available in all regions globally by the end of the year.