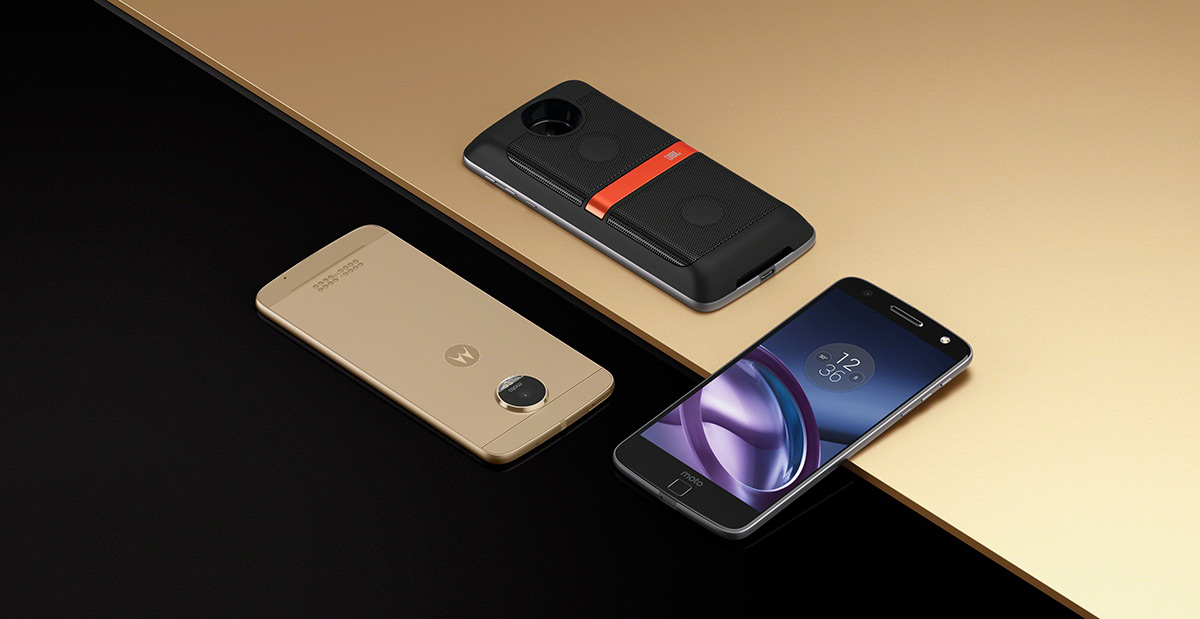 Ever since the mid 2000’s, smartphone innovation has stagnated “and is often incremental at best.” At least, that is what storied tech brand Motorola thinks. The future to them, was a world where people are empowered to choose the capabilities of their smartphone. So they built the new Moto Z Family, with something rather new to the smartphone world- Moto Mods. 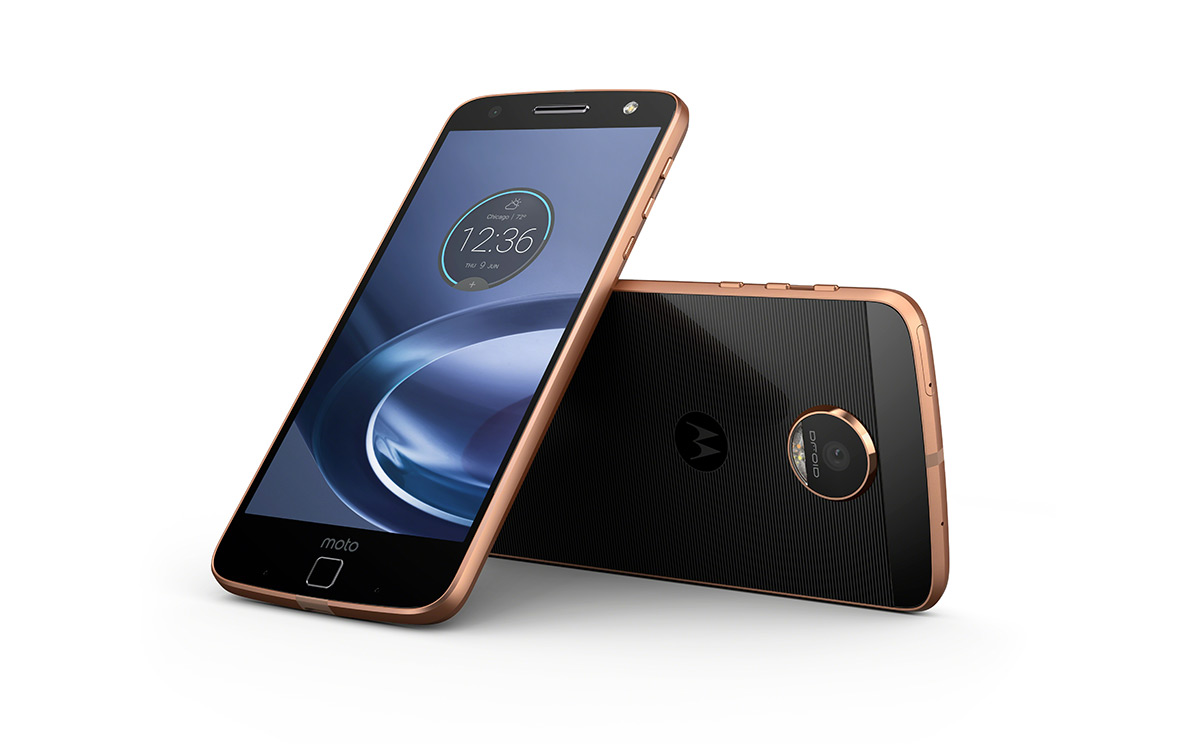 Motorola’s new device is the world’s thinnest premium smartphone – just 5.2mm – and ultra-light. It also carries an incredibly powerful Qualcomm SnapdragonTM 820 processor, 4GB of RAM and up to 64 GB of storage inside – extendable with up to 2TB with microSD cards. 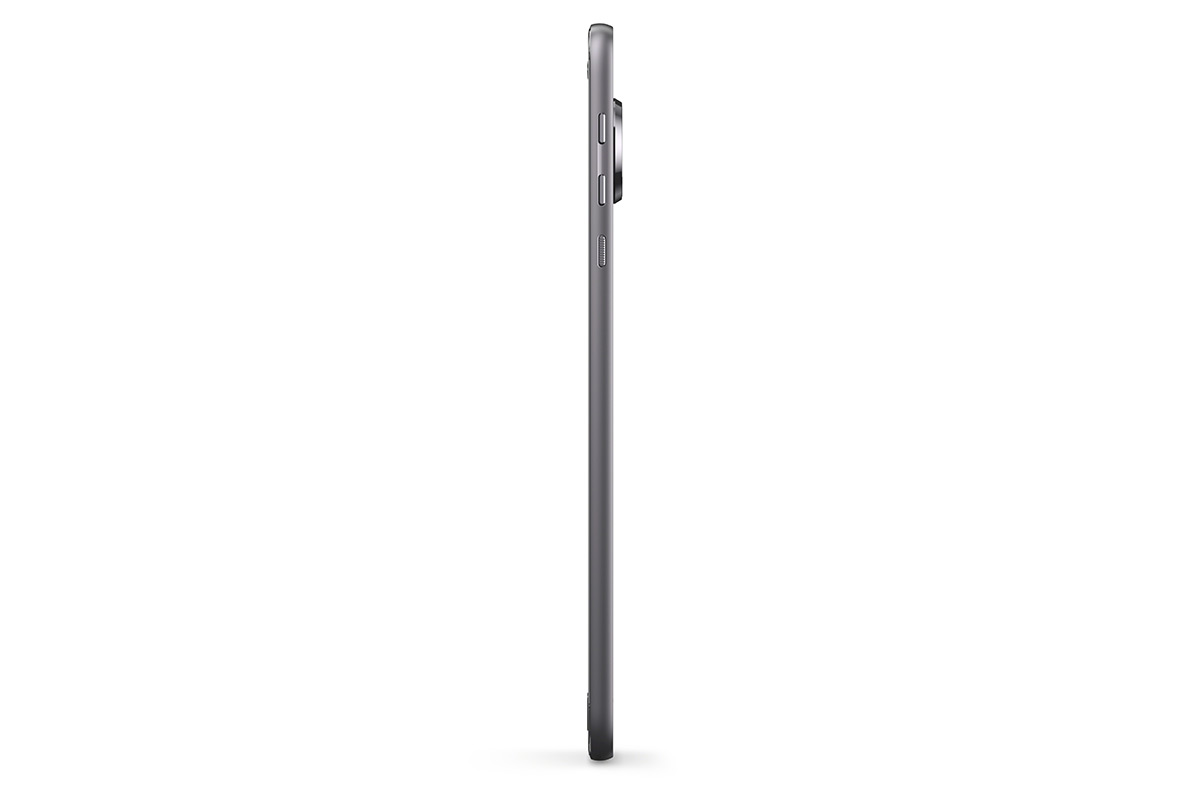 Added to all that, Motorla, who has shifted focus to imaging, provides its Moto Z with high-resolution 13MP camera’s with optical image stabilization and laser auto focus, “for good pictures in any light.” What else? A water-repellent coating, a fingerprint reader, and up to 30 hours of battery life.

The Z Force is an upgraded, higher-end version of the phone with a 21 megapixel camera, longer-lasting battery and better overall performance. It has a 48 hour battery that can be charged for 15 hours of life in less than 20 minutes. 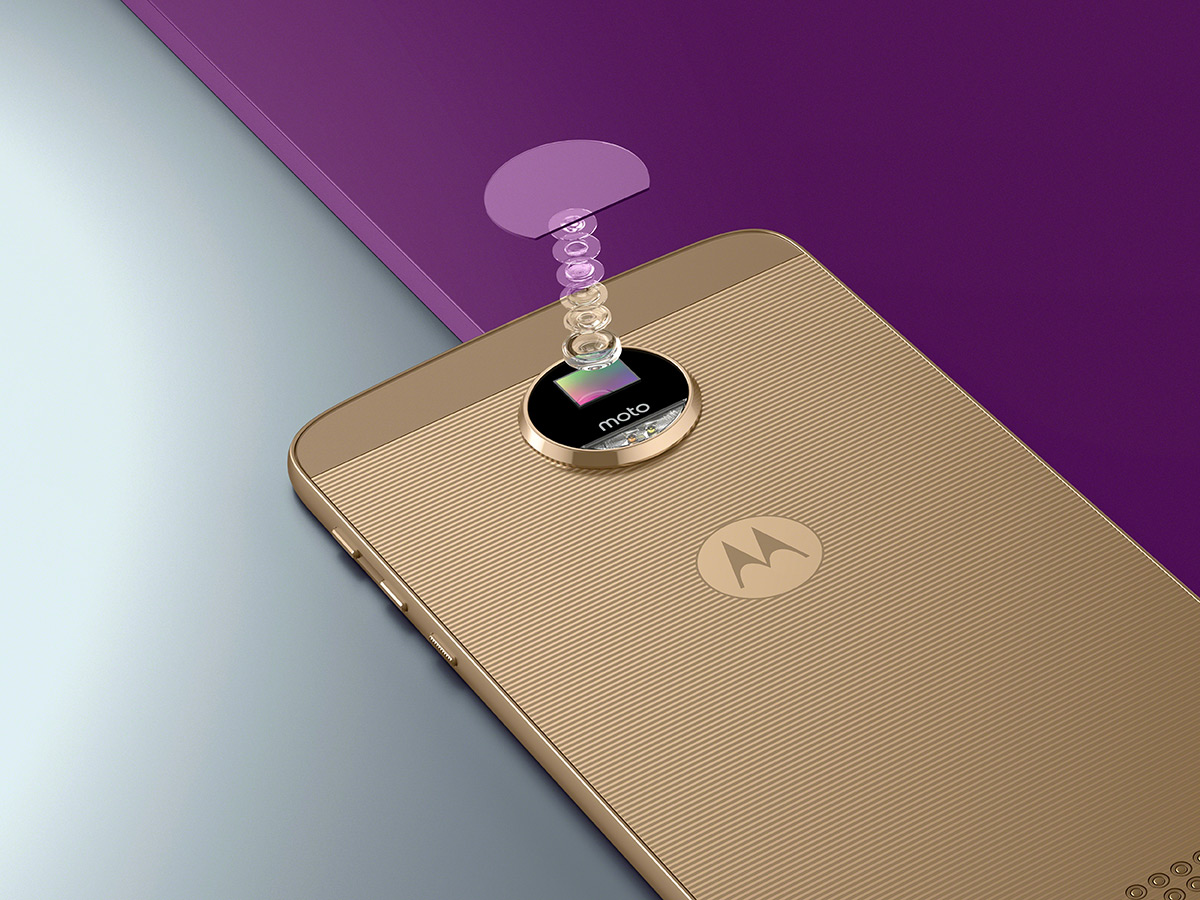 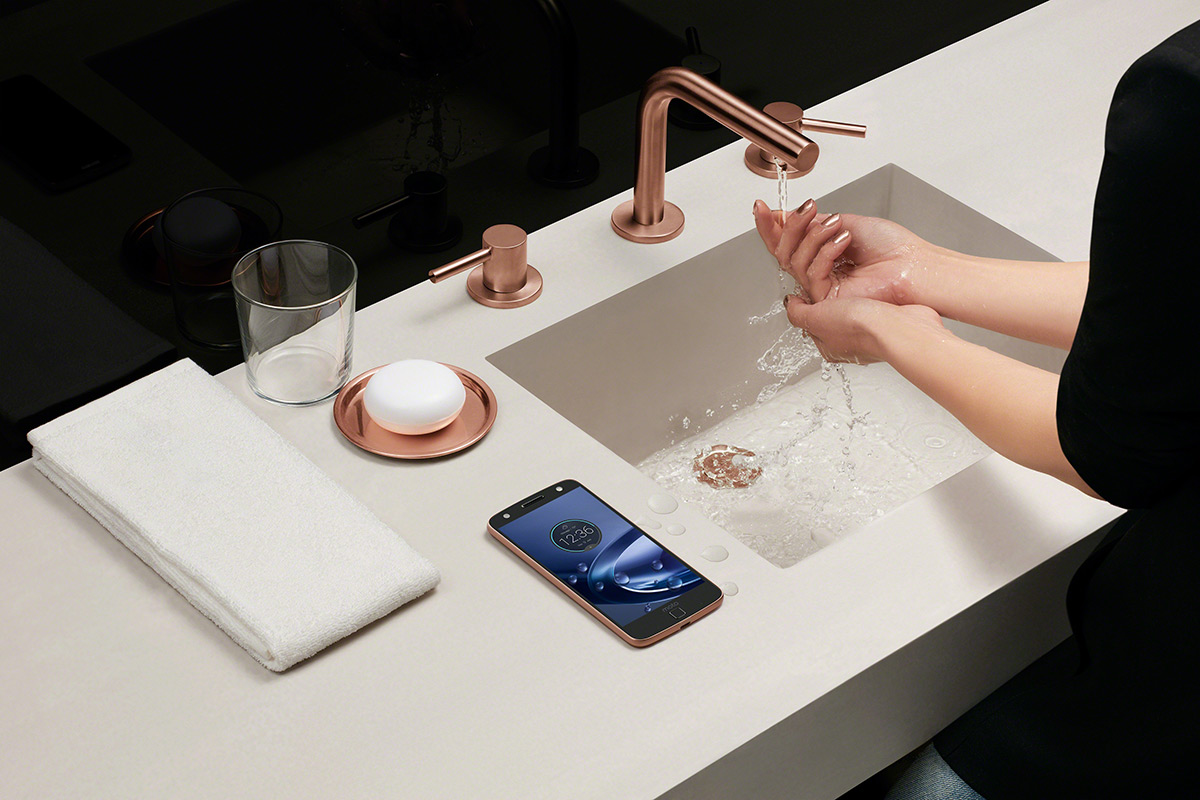 As a standalone phone it’s nice, but what makes it special is the system of modifications that Motorola has envisioned for the phone’s future.

So, how about those modification possibilities? Well, there’s the “really, really loud” JBL SoundBoost, to be an instant party maker, or the Moto Insta-Share Projector, to turn your phone into a 70-inch movie projector? Need an extra boost? Grab a Power Pack to instantly add up to 22 hours of life to your phone. You can also match your phone to your own personal style with Style Shells that come in premium materials like real wood and leather, or patterned fabric. You can swap them whenever you like. Both the projector and the JBL speaker mods also come with their own batteries, extending the lifespan of your phone even when using the power-hungry mods.

High-powered magnets are responsible for the connection of Moto Mods to your phone, “so you can easily snap them together as your needs change.” And Motorola assures you that the Moto Mods developed today are designed to work with future generations too. 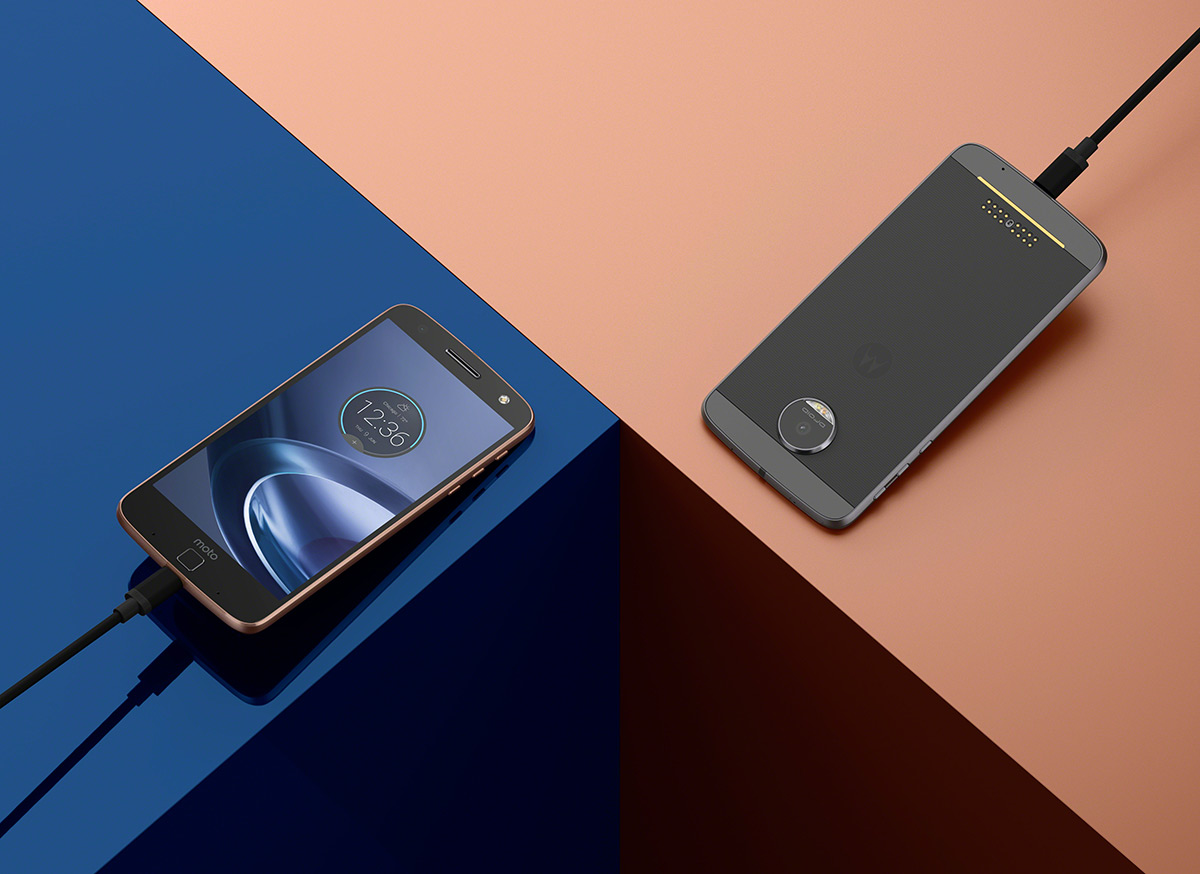 The Mods program launched as well, with a Developer program offering a $1 million prize to the folks who build the best and more innovative hardware/software mod:

The Lenovo Capital and Incubator Group (LCIG) will be setting aside seed equity funding to spur innovation on the Moto Mods platform. In addition, the LCIG has set aside $1,000,000 in equity funding for the individual or company that creates the best Moto Mods prototype by March 31, 2017.

Curiously, no modification to expand on the power of the camera was announced, and for a photo/video journalist, that was conspicuously absent. It seems like one of those things they would “have” to have in the near future, with smartphone photography growing dramatically in popuarity. That is not to say the built-in camera won’t be great, but with a modification system like this… Why stop with what can be packed into the aforementioned slim body? Mod developers… This is a call to you!

Moto Z also will be available unlocked on moto.com and at various retailers this fall.