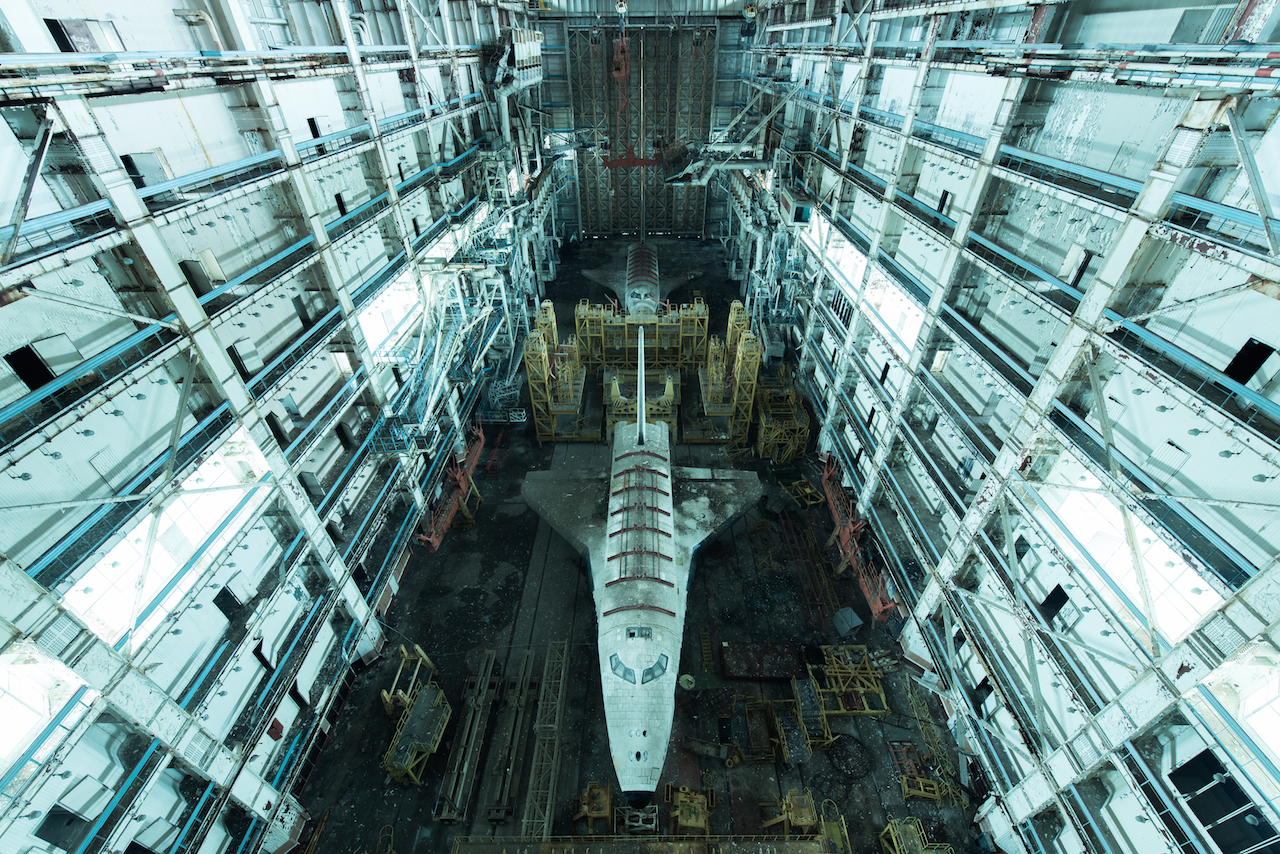 28-year-old Franco-German photographer David de Rueda has always had a passion for the desolate. He created the Urbex.Fr website in 2007, and by the end of 2013, his work was displayed at Paris’ famous La Samaritaine department store. In 2014 he released his first movie, Urban Escape, while he also collaborated on the direction of music videos for Kery James, Maître Gims and other artists.

Last year,  the “urban explorer” partnered up with Nikon to capture abandoned locations in Europe that had rarely or never been photographed before. The project provided him with “an opportunity to challenge myself and push my urban exploration photography to another level.” David’s six-week road trip throughout nine European countries resulted in astonishing imagery, that eventually became part of Nikon’s Project Spotlight: Abandoned Places. THE MOTHERSHIP.
“Linnahall is a former concert hall in Tallinn, Estonia. With a two minute exposure, I could reveal the architecture of the place, which otherwise sat in darkness. The central framing gives the photograph its power, drawing the eye right to the centre. To me, it almost looks like a spaceship.”
© David de Rueda HIGH FREQUENCY.
“This picture was taken in a disused experimental power facility near Moscow, which was closely guarded by half a dozen dogs. After a little persuasive discussion, the caretaker let us in. As the sun was setting, I had a few minutes to find the perfect point of view. A chance bird flying overhead added further poetry to the scene.”
© David de Rueda

“I started urban exploration when I was about 17 years old. I was very curious with these places we see every day, but never get to explore.” LONE BIRD.
“I spent some time exploring the rooftops of Pripyat (a ghost town in northern Ukraine) because I could see the whole area from there and it offered an opportunity to stretch my creativity. In this picture, I wanted to capture the total loneliness that encapsulates the city.”
© David de Rueda SUN DUST.
“On the second day in Pripyat, I had the chance to witness a sunrise from the top of Pripyat’s highest building, the Fujiyama. Sun rays ran in the middle of the dead city, bringing the whole place back to life for a few short seconds.”
© David de Rueda

The more David became interested in his genre, the more demanding he became of his gear. In a talk with Nikon Europe, he shares what an urban explorer like himself packs in his “quite small” photography kit, why he packs it, and what you should watch out for. Viewers learn how he not only carries around his D810 and a few lenses, but also a few torches and gloves. CHILD DREAM.
“Our last day in Pripyat. For the three past days, I asked myself how I could capture the famous ferris wheel from a new and original point of view. Luckily, my wish to have some snow was fulfilled, providing a dreamy ambiance that totally changed Pripyat. Positioning myself on a rooftop next to the wheel, I finally captured the picture I was looking for.”
© David de Rueda THE ONE.
“This is inside the abandoned power plant near Budapest, Hungary. It’s an impressive place, with a huge sense of scale, abandoned machinery everywhere and a strong, haunting atmosphere. I felt like I was in a science fiction movie and wanted to create my own world with this photograph.”
© David de Rueda

“I like to bring people to these places, because it brings life to them. Because these places are dead.” THE SIGNAL.
“Under the congress room of Buzludzha (historical peak in the Central Balkan Mountains, Bulgaria), I discovered a place that seemed to be from another planet. I used my torch to light it up and discovered everything was covered with ice.”
© David de Rueda NIGHT SOULS.
“Somewhere in a deserted area of Iceland’s south coast lies this long-forgotten wreck of a Douglas DC-3 aircraft. I arrived there at 4am and, as we waited, polar lights gradually appeared on the horizon. I admired this magic show until dawn and used a 90 second exposure, with some light painting added inside the plane, to capture this image.”
© David de Rueda

“The prototype Soviet Buran spacecraft deep in the Kazakhstan desert was the most epic scene I’ve discovered since picking up a camera. It was a real adventure to get there, and to be able to take photographs of them was the ultimate reward. The feeling when I saw the nose of one of the shuttles with my flash light in the middle of the night was truly indescribable!” LOST IN SPACE.
“This image is the result of 180 kilometres of off-road driving in the Kazakhstan desert, followed by 45 kilometres of walking in a highly restricted area. We arrived and there they were; two relics of the Soviet space race in a huge abandoned warehouse. “
© David de Rueda

When asked about places he would still like to explore, David tells Resource Travel that “the list is endless!” And he doesn’t seem worried about getting inside of them. “It sometimes requires imagination, but there’s always a way.”