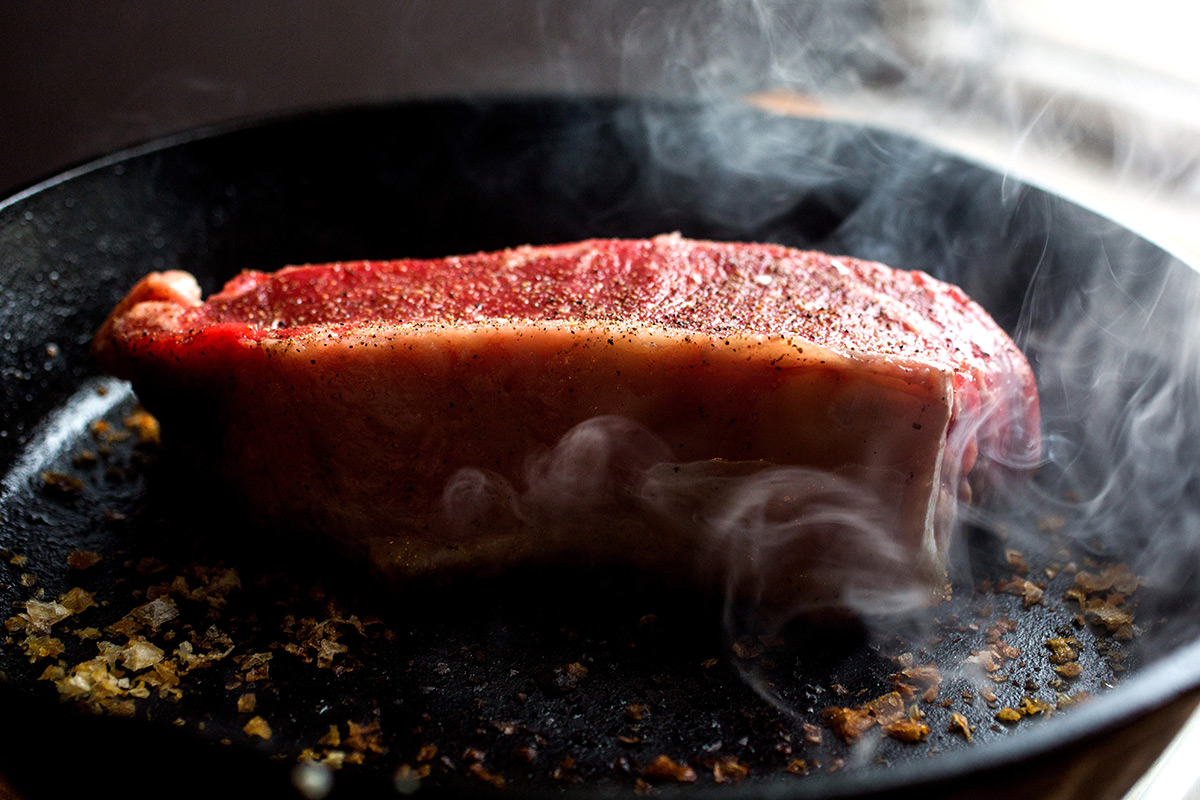 © Andrew Scrivani for the NY Times

Because Andrew has been evolving more and more into teaching and directing film lately, he doesn’t rule out that “maybe I’ll move away from food and food photography completely some day.” But before that possibly happens, he was kind enough to teach me a thing or two about food photography, and to share some of the experiences he gathered throughout his career.

Nowadays, everybody takes a picture of their food. And as long as you respect certain rules of etiquette, there is absolutely nothing wrong with that. For example, when you are in a restaurant, Andrew quite rightfully finds it discourteous to use your flash light or to go stand on your chair. 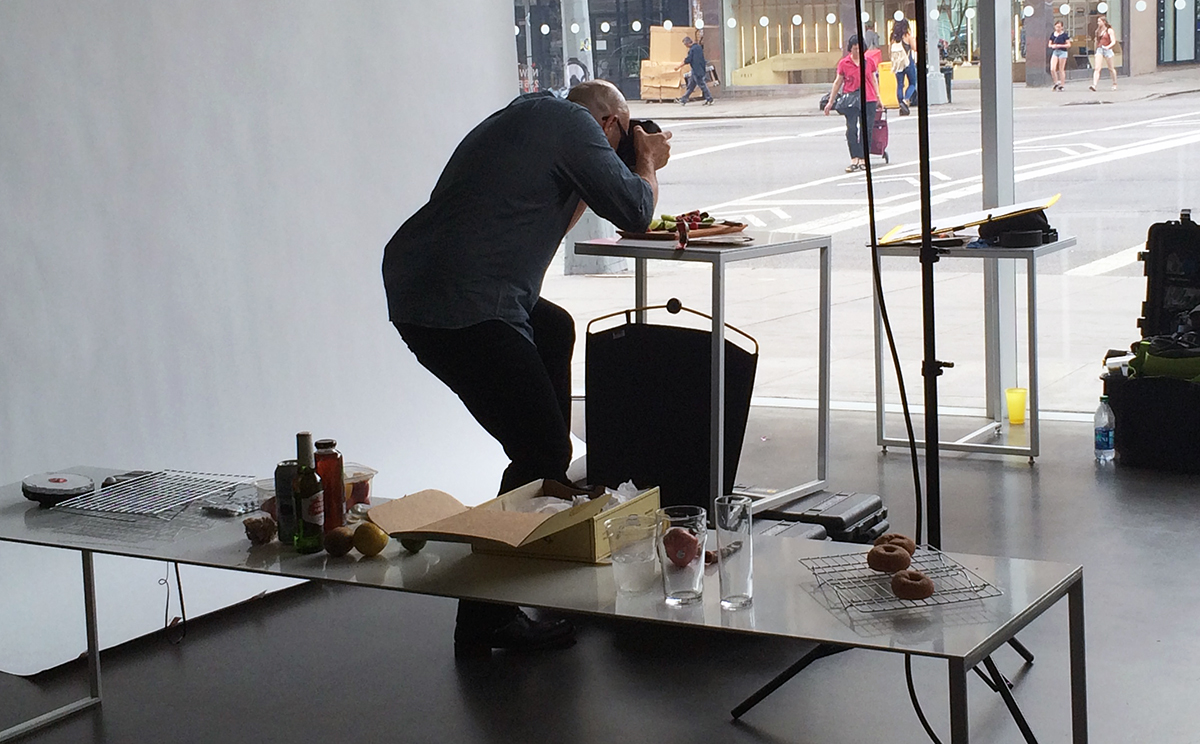 But just because you are taking a picture of your food, doesn’t make you a food photographer. It’s more of a social media “look where I am and what I’m eating” phenomenon. Food photography is a way more complicated art form.

Nothing is as important as your (high quality single source) light

Be sure to understand the way that light hits or should hit your plate of food, and learn how to craft that light by identifying, diffusing and bending it. If you master all that, you’re already halfway towards some nice food photography.

And try to use daylight as much as you can, a technique in which Andrew believes he and a handful of others pioneered in. “When I started out, a lot of high level food photographers didn’t use daylight. I did, because I didn’t know how to use strobes.”

“With a few photographers, we were constantly pushing the boundaries, eventually shaping the industry. We created a Johannes Vermeer style art: really interesting still lives with dark backgrounds. They looked like paintings.”

There’s nothing wrong with sharing details about your technique

A lot of (food) photographers don’t share their camera settings, but Andrew does. And when he does, people are voracious about it. “Especially for the numbers on the camera.” When he’s asked about why he shares his precious information – which is a lot – he explains that it’s actually very simple: “Because the most important variable in a food photography situation, are the eyes of the photographer. Not that mine are better than someone else’s, but they’re different – the eyes are unique.” As Andrew points out: you can have the same exact setup, with the same exact settings, and still end up with a completely different picture, just because someone else took it.

As a food photographer, you have to respect the fact that someone cooked that food. Get in the kitchen and talk to those people. But also talk to the propper, who is picking all the props to create this new world on your plate. And talk to the stylist, who positions the food in a particular way.

It takes a lot of expertise to make it all work, Andrew learned. And, “doing all these things myself when I began,” he now has a lot of respect for everyone who’s involved in his food photography process. Furthermore, Andrew recently discovered some influence of his evolution towards film and directing: he can now “step back and let people do their jobs. I trust my people. They know how to do what they do.”

It’s all about the macro

Andrew calls himself a Canon shooter, but also sometimes uses Sony’s for his still photography. He started off on a 100mm lens, but quickly got into 50mm macro lenses. “It’s a great frame for food and allows you to get really close.” There’s no denying the stereotype that food photographers are glued to their macro’s. “I could shoot a whole job with that lens. It’s a stereotype for a reason. It’s true. And it works.”

Aperture wise, the food photography scene quickly settled in at about 4.5. “In the early days, the trend was to shoot very shallow, at 2.8 or even 2.5. But that didn’t last long.” For overhead photography, Andrew can sometimes go up to 8 aperture. “It offers a little bit more depth, without getting too tacky and sharp.” 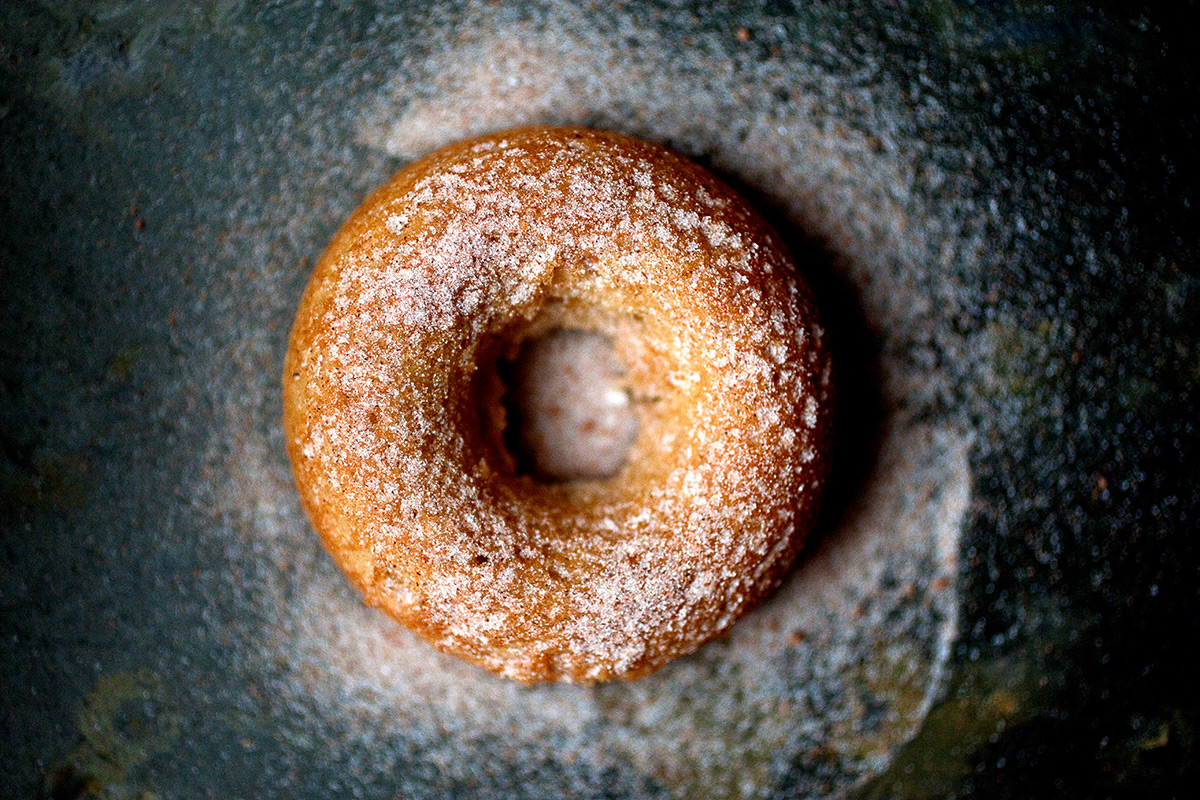 Other things in Andrew’s kit, are a bottle of water and some oil and a brush, to glisten things up when needed. However, he never uses anything artificial on his food. And when he goes to shoot outside of the studio, Andrew makes sure he packs along a lot of diffusion material. “Anything to play with the light.”

Inspiration and motivation for food photography can be found in a lot of places. In paintings, for example, like the one directional Vermeer-esque lighting Andrew was heavily inspired by. But the source of inspiration that might surprise the most, is architecture. “Food photography is three dimensional art. It has a structure, and you have to photograph it that way.”

A food photographer doesn’t work up an appetite

Professional food photographers don’t get hungry when shooting their plates. They keep food and appetite completely separate. “I don’t sit down and I don’t eat when I shoot. People even have to remind me to eat or drink something, because I am so focused.” That also applies vice versa. When Andrew goes to a restaurant, he is there to eat his food, not to take a picture of it. “I am not that guy with his camera at every table. All my food pictures are professionally shot, or shot in a way that is professional.”

Chefs and cooks are important for food photography, in the way that they deserve respect for the work they put in their food. It’s important to get involved with them, as said earlier, to understand the subject and the industry you are working with. But they’re not really an artistic inspiration.

“They will hate me for saying this, but chefs don’t know how to food style – you can quote me on that. Chefs plate food for diners, not for cameras. They have only one perspective on food: the way you look at it when you eat it.”

A food photographer looks at a plate from all angles, and for good food photography, you need someone who understands the ways your lenses come at the food. Which is why Andrew highly recommends working with food stylists, who are also “way more versatile than a chef. Stylists are not regimented in one particular way of cooking, like most chefs are. Stylists know all the styles. So they can plate all kinds of foods all kinds of different ways.”

You shouldn’t waste your food

Shooting food shouldn’t be an excuse to waste food. Therefore, Andrew refuses to use anything artificial, such as hairspray – something he calls “editorial dishonesty.” But when he first came on big sets, Andrew saw that seasoned stylist were doing those things. And when he would tell them not to – “We are going to eat that later!” – they would look at him like he was crazy.

“We experience a lot of waste in food photography, but I try to mitigate that as much as I can, because I am sensitive to it. I went as far as contacting food banks, but they didn’t want it. So… Everyone in my building eats really well, and we end up not wasting that much food.”

Andrew divides food into different categories, depending on how easy he finds it to take a good picture of it. The main thing that causes difficulties, is the way light plays on certain foods. “Dark greens and browns, and things that don’t reflect well or absorb lights, those are the hard things to shoot.”

Take for example curly kale, or the assignment Andrew once got to photograph a chicken dish that looked like vomit. “I had to call up the stylist to edit the recipe,” after which they ended up cutting up Serrano peppers and sprinkling it on top of the dish. “It broke off the awfulness, and made it look like food again.” The trick is to break up monochromatic, blobby, shape- and formless food.

Much easier things to shoot, are iconic foods, such as a beautifully crafted hamburger. “It has great architecture and it resonates with people.” And when everyone knows how it’s supposed to look like – “On a bun, with onions and lettuce, and drips of ketchup and mayonnaise” – you’re halfway there.

Understand (the culture of) your food

The goal of food photography is to move people and to make people want to eat it. To be able to accomplish that, you have to understand your food, and the way your audience feels towards it. “The more intimate you are with your subject matter, the better your photography is going to be.” If you are unable to connect with what people feel when they see a certain food, you are missing the point of food photography. If you are not thoughtful of the fact that food is a socioeconomic indicator, you are not doing a good job.

Andrew is convinced that food photography should provoke memories and should above all be real – or “true to experiences,” as he calls it. “You need to understand how people react to your subject. It is therefore very important to participate in the culture of the food you are working with. If I am engaging in some ethnic food that I don’t understand or that I don’t have a memory of or experience with, I will research it.”

The more you connect to food culture, the better you can be as an artist telling the stories related to it. And he who knows a people’s cuisine, is immediately accepted by them. “People are impressed when they know you respect their culture. More so than when you are trying to speak their language.” You have to understand the level of sensitivity food has.

Andrew therefore hates “extravagant reality TV versions of eating, like the four pound hamburger or the stacked-and-folded pizza with bacon and meatballs. Extreme is not what food is to us.” You have to be able to look at a plate and say “I would eat it this way.” When that’s not the case, Andrew has no problem with asking the stylist to change it.

Drink photography is something completely different

Shooting drinks and fluids requires a whole different set of skills. “There’s something extra challenging and different about shooting liquids and glass,” Andrew found out, compared to shooting solid food.

[Andrew Scrivani is an active user of social media platforms Twitter and Instagram. He was also blogging quite intensively for years, and more of his work for The New York Times can be found in their Food section]