Most of the attention today is no doubt, and justifiably, centered around the newly announce Fujifilm X-T2 and the plethora of upgrades and improvements to the X-Series that camera brings. But what will get less attention, and for Fuji shooters who may not be upgrading to the X-T2 anytime soon, the possibly more notable news is teh release of an updated lens roadmap and a firmware update for the X-Pro 2.

As far as when these lenses may be available? The 23mm F/2 WR looks to be coming in 2016, and based on the roadmap it looked like early 2016 – but given that we are now in July, my guess would be that the 23mm comes at some point in august, or maybe in September alongside the X-T2. The 50mm F/2 and the 80mm Macro are both slated for 2017 launches. 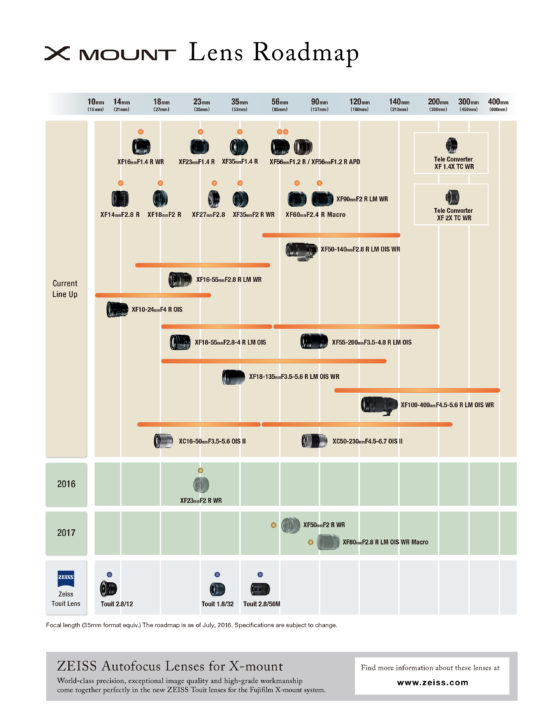 Fujifilm being true to their reputation did not leave X-Pro 2 owners out in the dark with this X-T2 announcement, and just as in previous years, they have announced a firmware update to the X-Pro 2 that brings the AF algorithm updates in the X-T2 to the X-Pro 2 – in addition to some other improvements.

Notably though, X-Pro 2 users will need to wait until October, a month after the X-T2’s launch, to get the upgrades. No exact date was announced, so at this point its unknown how long that wait will actually be. Still, X-Pro 2 owners will no doubt be thrilled to get an AF upgrade, as well as any other notable fixes or improvements that may be added between now and then.