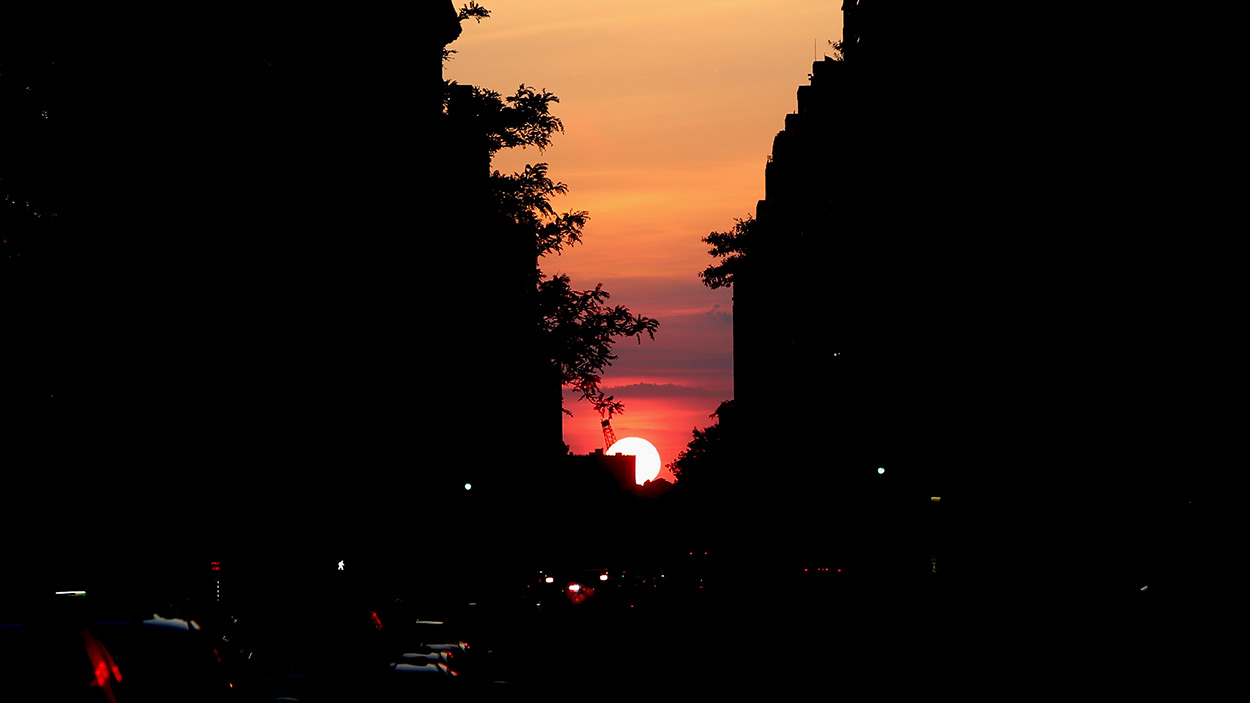 What I Learned from Trying to Capture Manhattanhenge

Safe to say, I’m a writer rather than a photographer. But I do know how to handle a camera, even though I currently “only” have a Canon EOS 400D and its ultra standard 18-55mm lens. I used to have a little more than that, but, well, circumstances…

Every once in a while, I go out to take some pictures. They’re not world class, but I’m doing okay. And when I moved to New York a couple of months ago, I was looking forward to hitting the streets with my camera during Manhattanhenge.

For those among you who don’t know what on earth that is: it’s when the sun perfectly aligns with the main East–West streets of New York City’s central borough. It occurs four times a year, on dates evenly spaced around the summer solstice. This year, on May 29 and July 11, a “full sun” would appear just above the horizon. On May 30 and July 12, the same would happen with a “half sun”, which is when the solar disk already partially hides below the horizon.

Having missed any previous occasion, my final option to do what I had always wanted, was July 12. I packed my 400D and went to the corner of Union Square and 14th Street right after work – one of the places where I would get a good view on Manhattanhenge, according to the American Museum of Natural History. I also carried along my girlfriend’s Canon EOS 6D with 24-105mm lens, since she would try to meet me in time to take some pictures too.

I was about half an hour “early” – it would take place at 8.20pm – and I could already see some fellow amateurs frolicking around me. Which is immediately the first thing I learned from trying to capture Manhattanhenge: be on time. Google can only prepare you so much. You need to experience the actual environment from where you’ll be trying to shoot the magic. Traffic, lights, trees, constructions… you need time to discover and experience anything that could help (or hinder) that perfect shot. 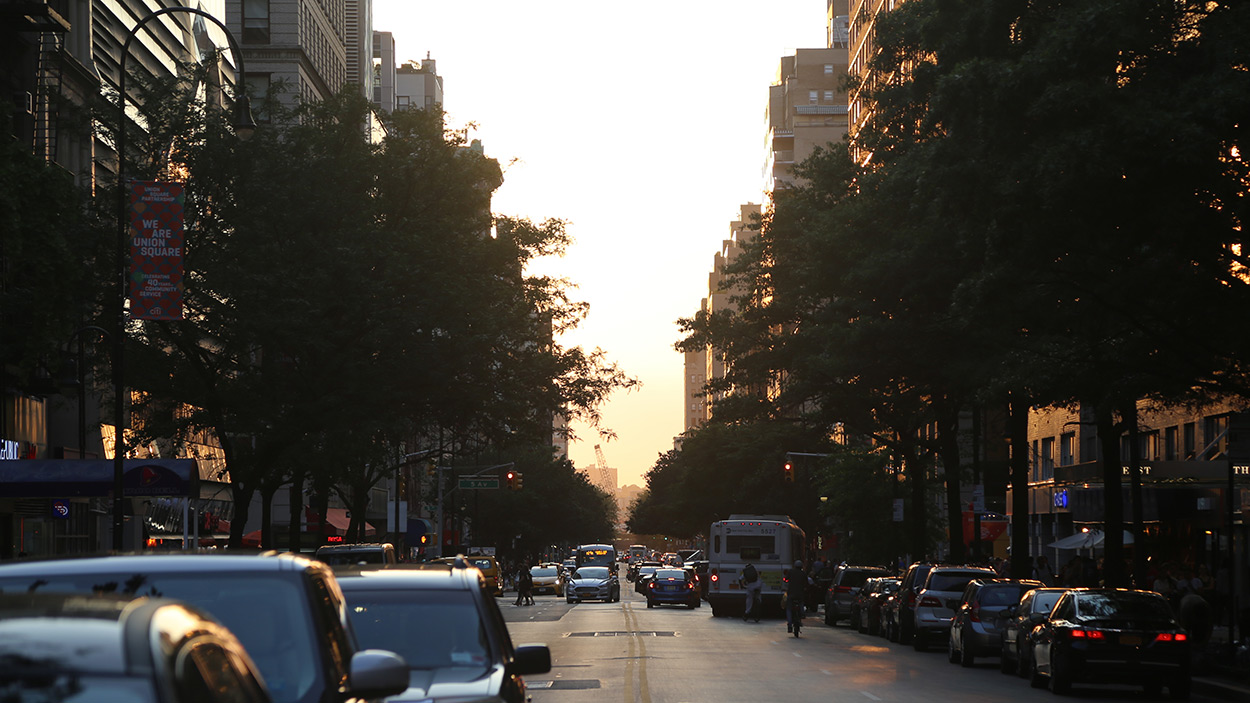 Make sure you have enough time to explore the area you’re shooting from.

Related to that, I learned that it is important to know what you want to shoot before it all starts. Because the actual Manhattanhenge only lasts a minute, and you can’t waste precious seconds on trying to capture different things. Go for one or two types of shots, and try to make the best of it.

Which is why it is important to do some decent research and to go rehearse. Google only knows so much. If you think a location is good, it’s a good idea to go and check it out in advance. Who knows, maybe it’s not so good after all – like I experienced on the corner of Union Square and 14th Street. And since I went on the last of the four possible days, I have to wait another year to have a better go. 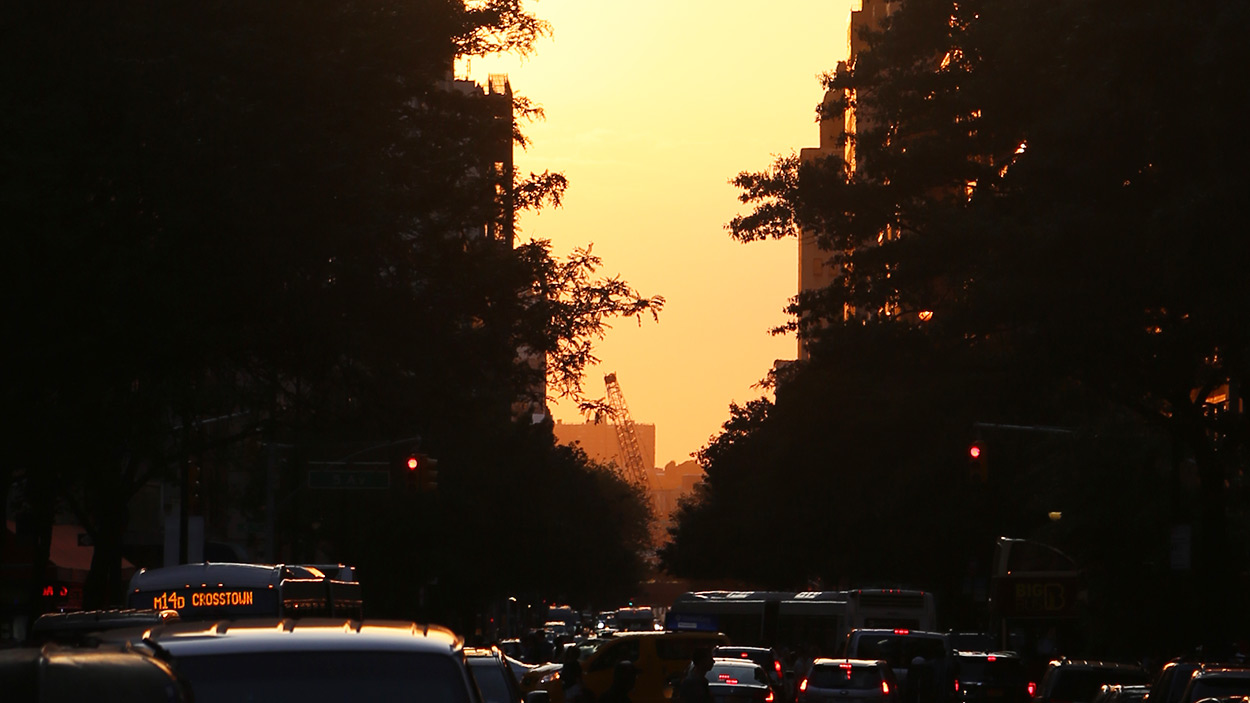 Trees, traffic, a building, a construction crane… The corner of Union Square and 14th Street just wasn’t the best spot.

Come with good gear too. A 400D with 18-55mm lens just won’t make give you that classic, burning red shot. Which doesn’t mean it was useless, though. I tried some other things with it that did work out.

How to be creative with your 400D and 18-55mm lens during Manhattanhenge.

Tripods are useful – especially to lift your camera above everyone else’s – but slightly clumsy. Furthermore, don’t bother bringing along several lenses. By the time you made a switch, the sun will be gone. And don’t trust auto mode to do everything for you. Learn a thing or two about your camera’s settings, and find out how to use them for optimal results. 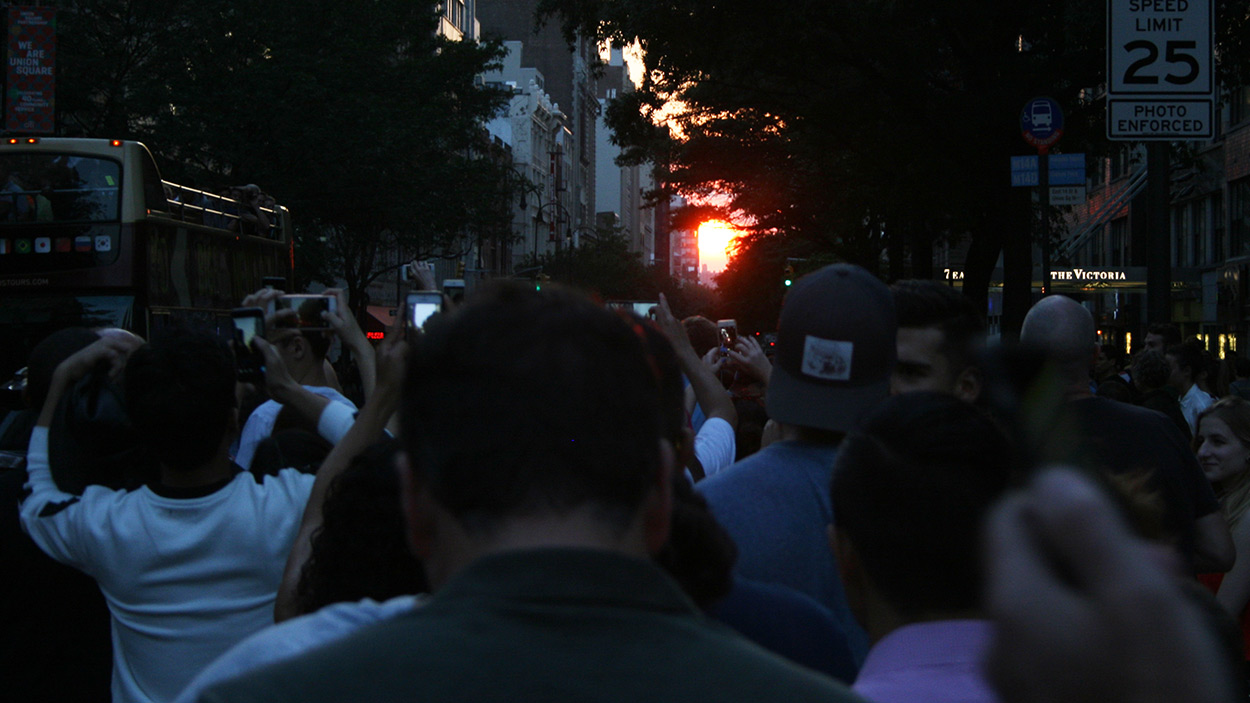 Consider a tripod to rise above everyone’s head

Thank God that I brought my girlfriend’s 6D. That’s the type of camera you may want to consider shooting an epic sunset with (if only I knew how to handle the camera a little better). Below, you’ll see what I think are my best two shots of Manhattanhenge. Notice that one doesn’t even have the sun on it. Which makes it just your average New York sunset picture, I guess. 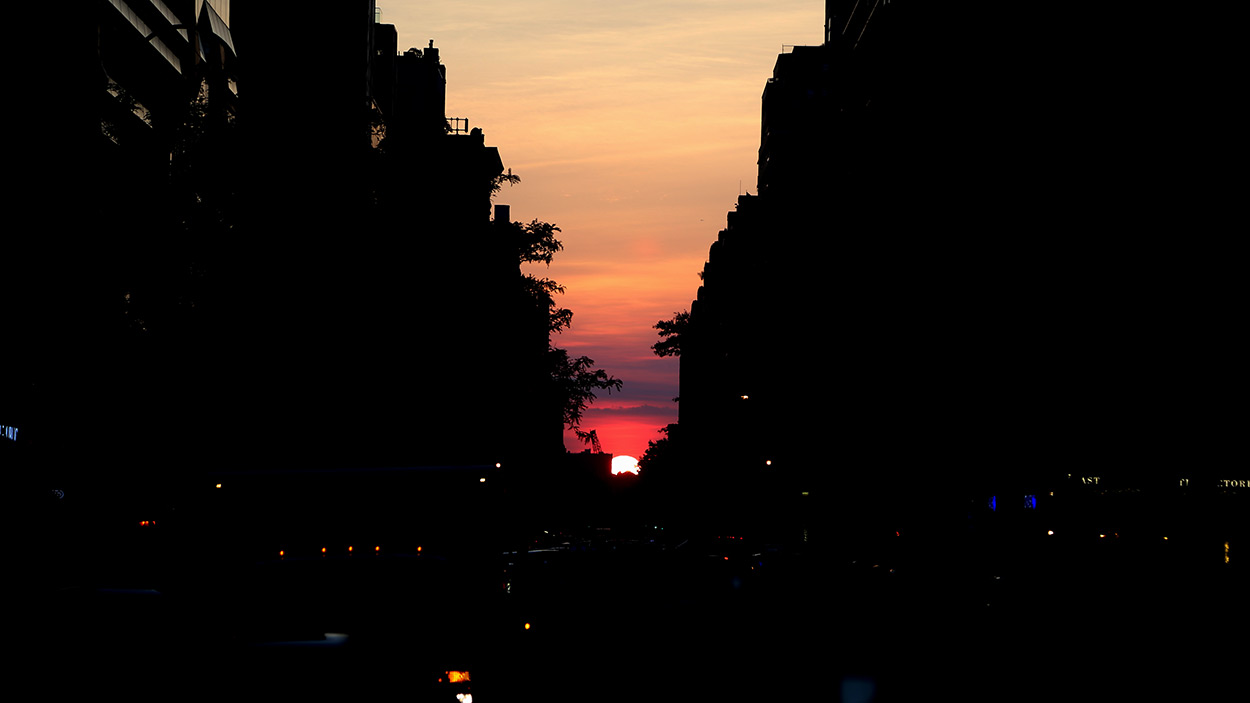 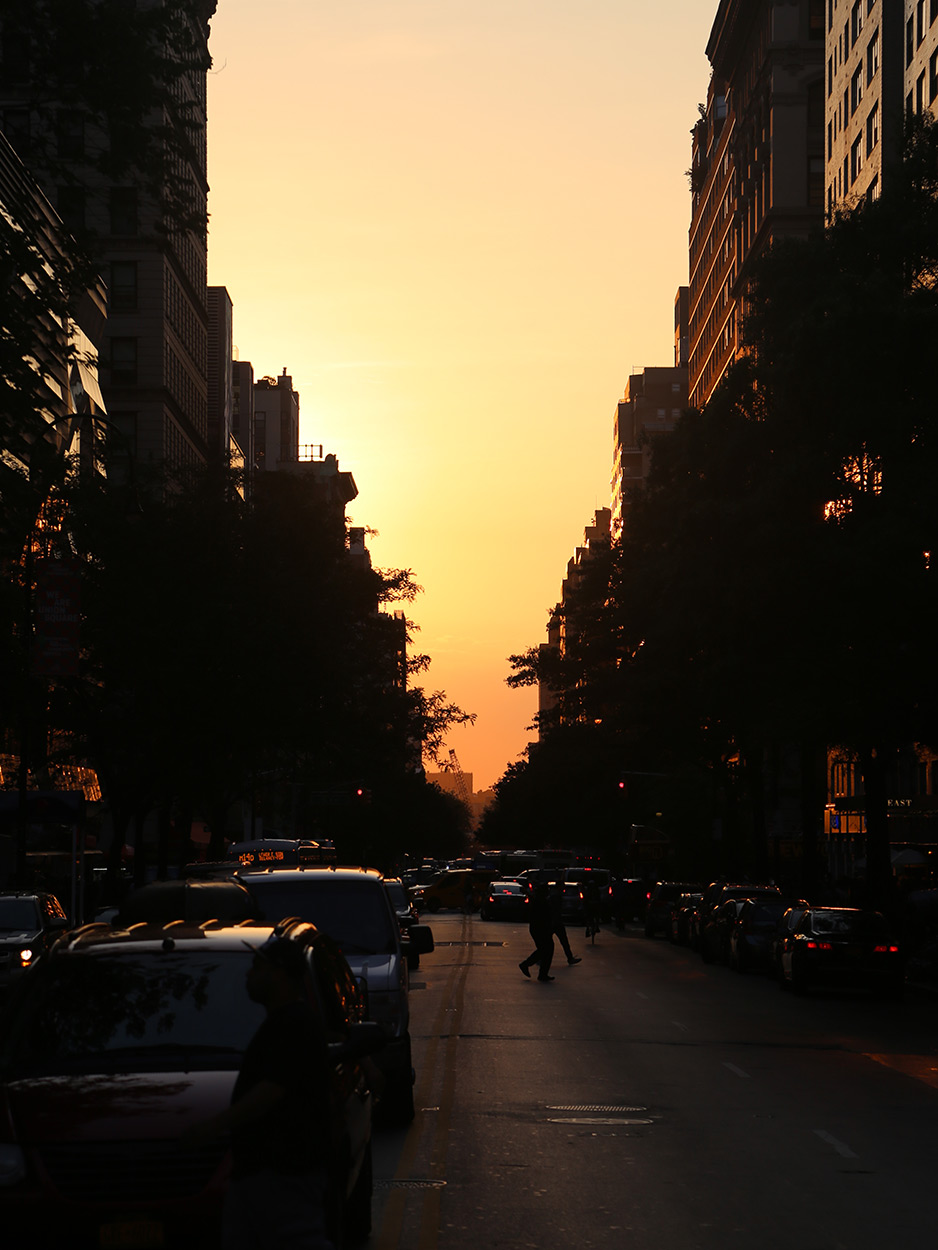 Oh, and know that you won’t be the only one, so try to be original. And traffic will hate you for standing in the middle of the crossroad. 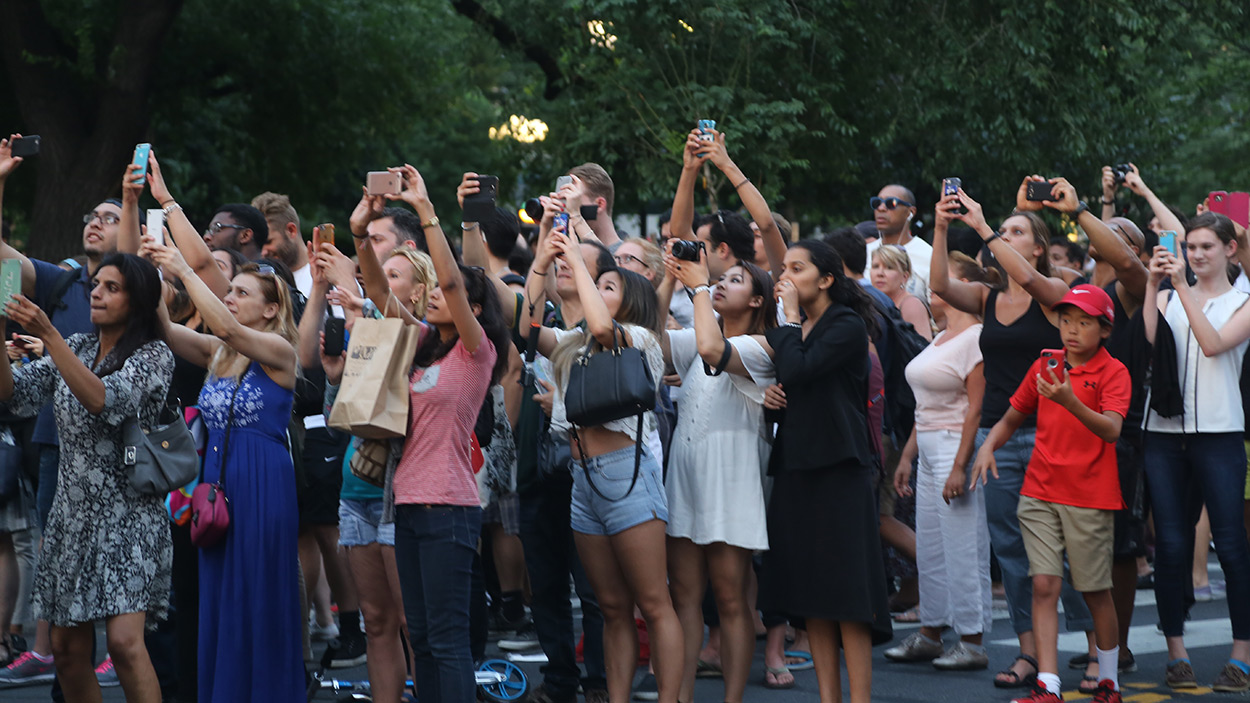 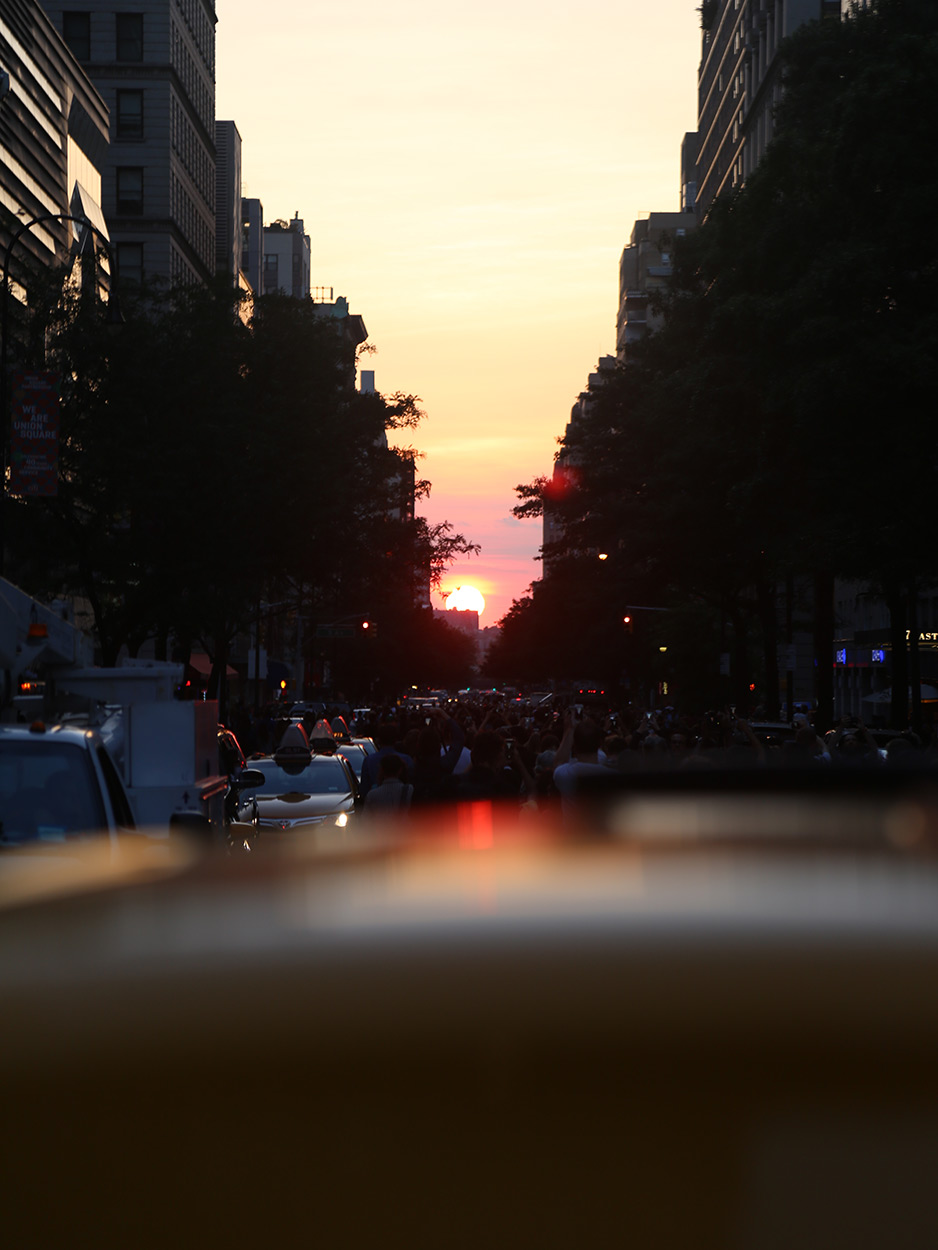 So try to be creative, for example by adding a taxi to your composition. 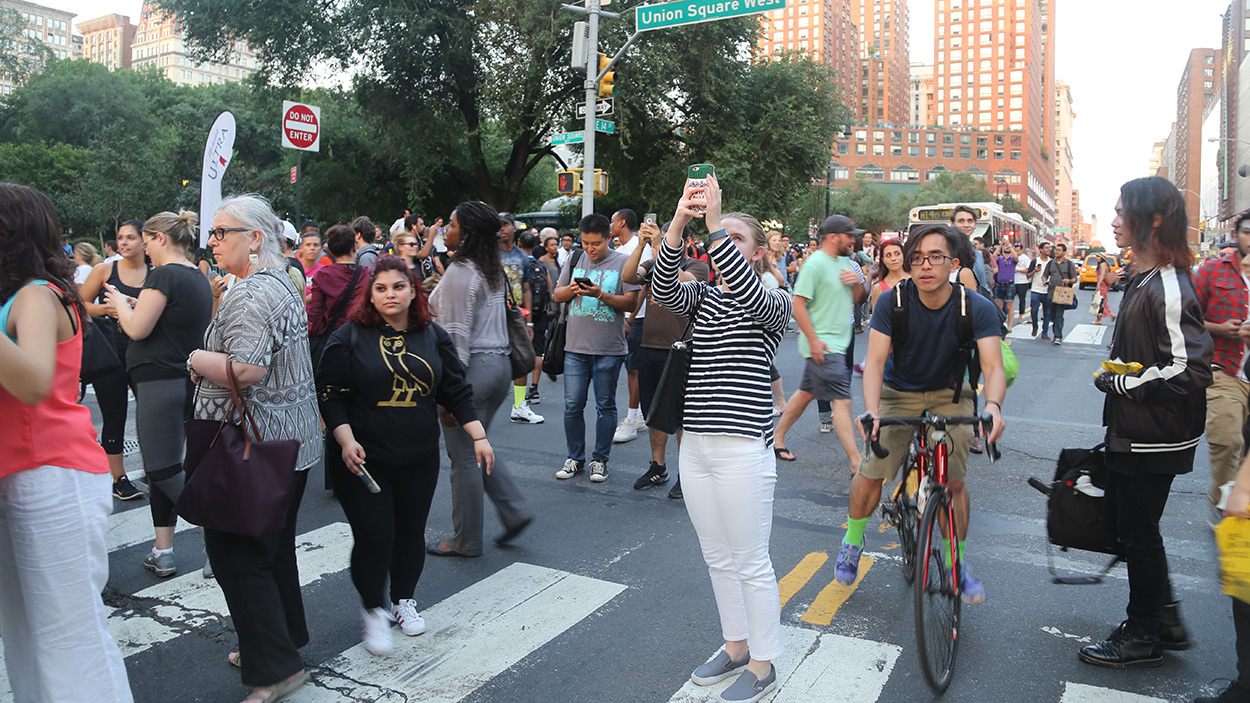 And traffic will always hate you.

Have you ever successfully captured Manhattanhenge? What are your tips? Let us know in the comments below!