An Inside Look at F-Stop, A Bag Company Falling Apart at the Seams 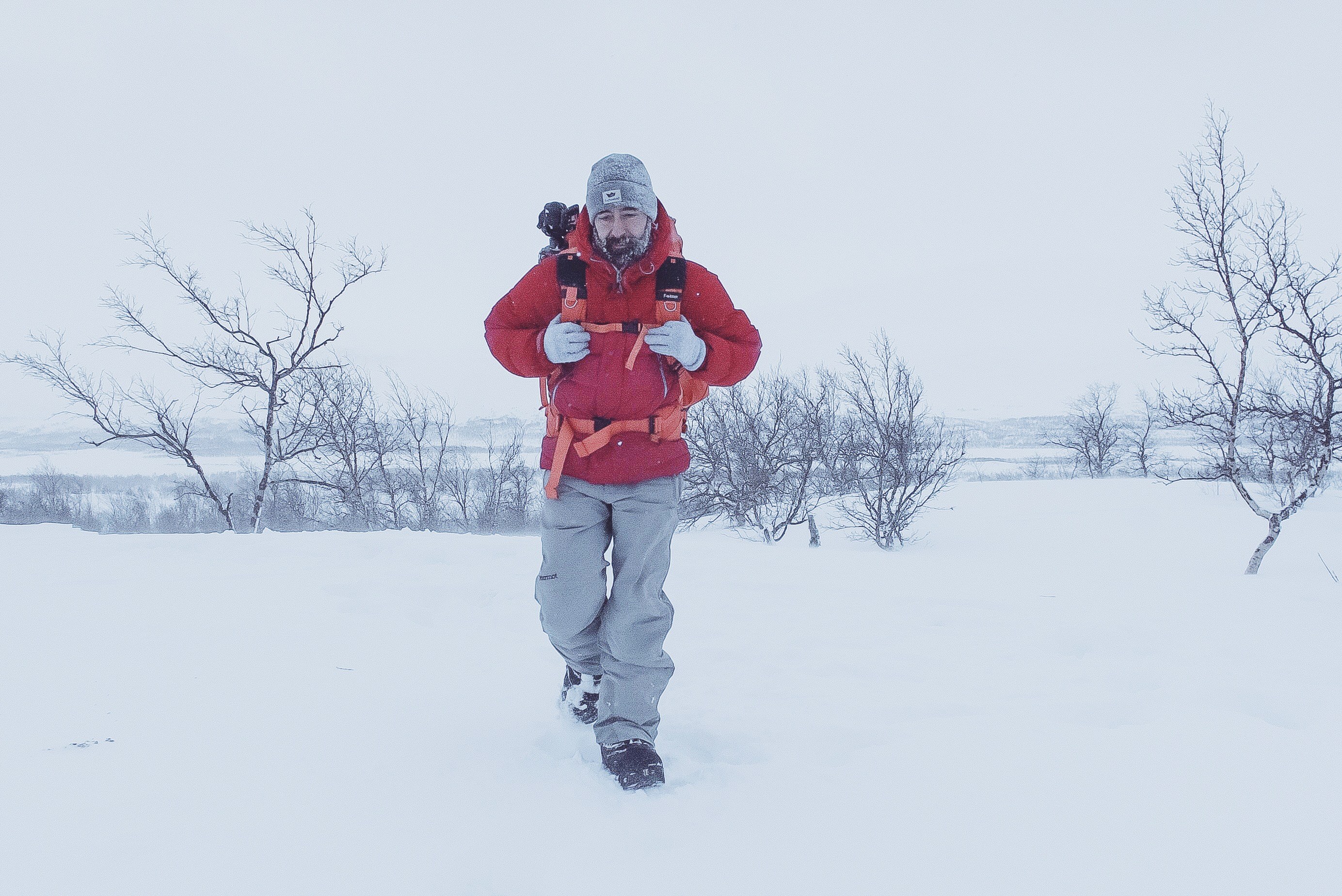 F-Stop makes some of the most cherished, beloved camera backpacks on the planet. Anyone who uses their equipment swears by them, and their interchangeable internal units that allowed you to customize your backpack to fit your specific needs on a particular day is also brilliant. But despite these factors, from the perspective of an outsider or prospective buyer they seem… disorganized. Their stock of product is always low, their supply chain wait times are absurd, and their latest Kickstarter is not looking so good. So what’s going on at F-Stop?

Not long ago, a concerned F-Stop Kickstarter backer pointed out to me some troubling news regarding their latest campaign for the KitSentry, a bag system designed for tracking and organizing equipment. F-Stop Gear created a Kickstarter back in February 2015 for this relatively ambitious project, and funding closed successfully in April, 2015 at $27,039 with 227 backers. 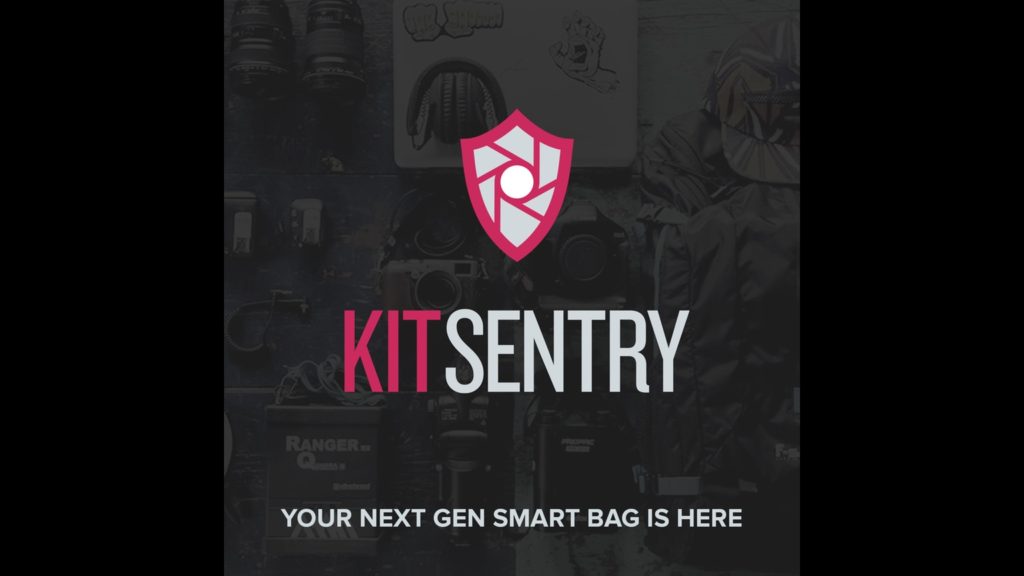 Since that point, F-Stop has delivered no “real” updates. Over a year later, they have gone nowhere with the product and only issued apologies sporadically. The last public update was April of 2016. They were estimated to deliver the main product of the project nearly 10 months ago.

Below are two additional updates only provided to backers that were published late last year. 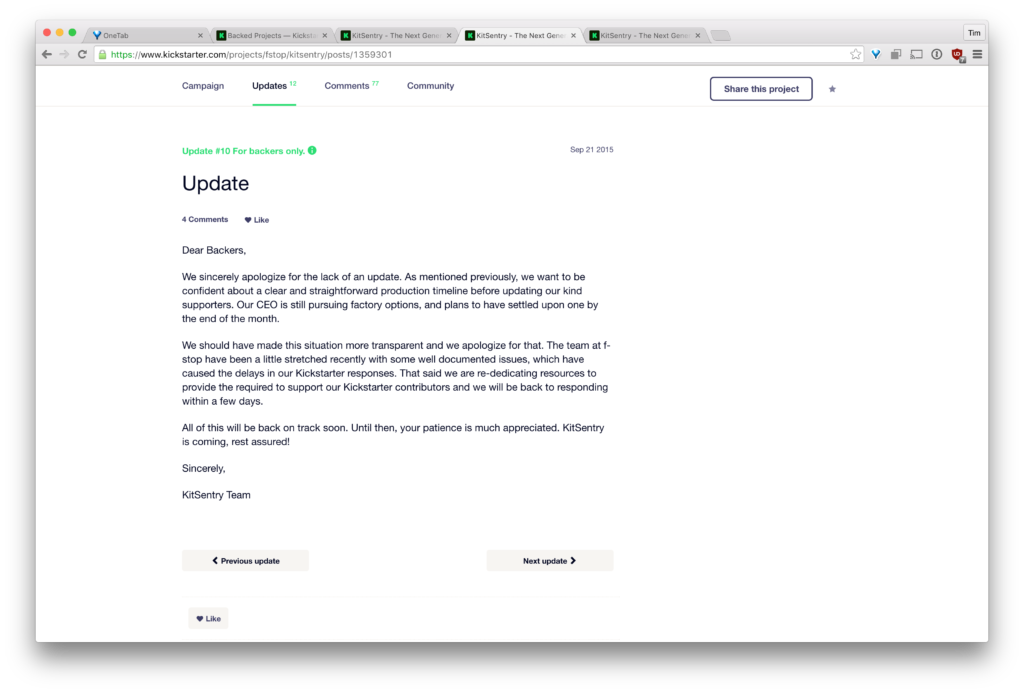 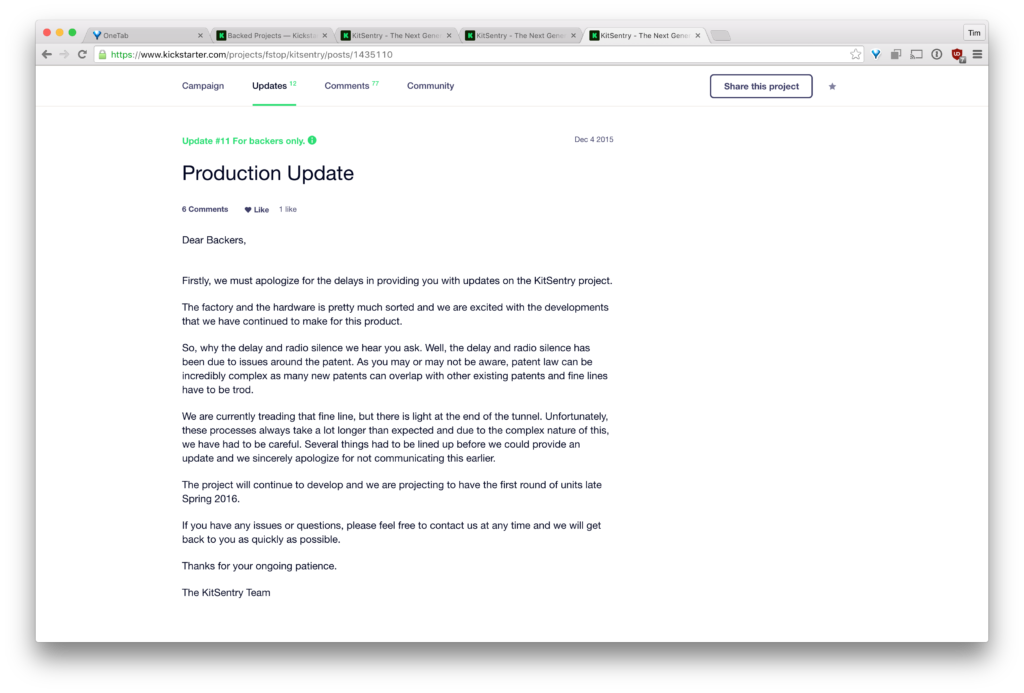 Many backers have expressed their frustrations in the comments section of the Kickstarter, several asking for their money back. Curious to see what the hold up was, I sent inquiries to F-Stop, just looking for them to provide additional context.

Despite initially responding that they would find out what the hold up was and get back to me, in the end F-Stop did not provide answers to my questions, and then ignored repeated requests over the course of weeks.

In order to figure out what was going on, I reached out to someone close to the company, who wishes to remain anonymous. What my contact told me branched far wider than just KitSentry, and spoke to the state of the company as a whole.

“F-stop was a great company at one point.”

“F-stop makes great products… unfortunately, those great products are never in stock and there is a deep rooted reason why that is,” my contact told me. “The company is run by a man of many faces. A narcissist that, to put it simply, got lucky with a good idea from a former partner and a good team that helped him build a powerhouse in its respective niche segment.” 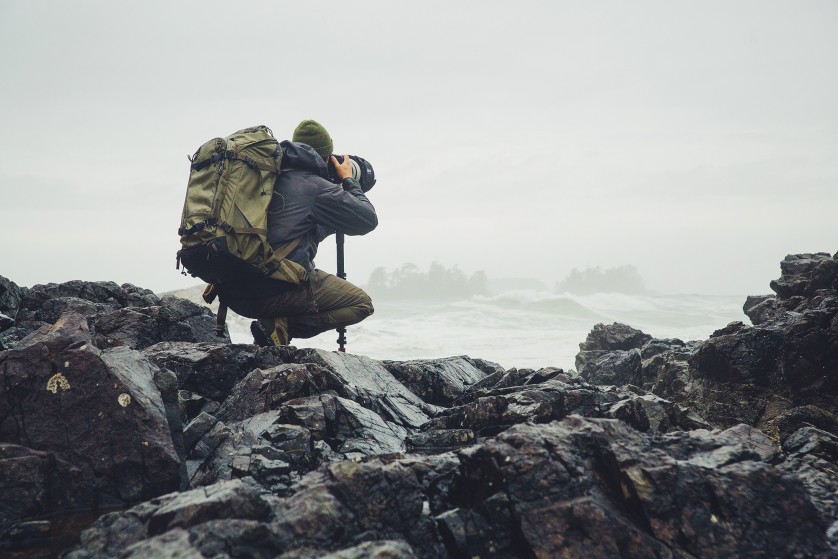 Becoming that powerhouse apparently had an affect on the owner. “Over the last few years, things got to his head and he started living an unsustainable lifestyle, hemorrhaging company funds to feed his expensive travel habits that included flying business class all over the globe, 5 star hotels, and outrageous dining/bar tabs. He also used company funds to start up multiple side businesses doomed from the get go.”

“[The owner] shifts gears and jumps projects so often, he couldn’t get anything done.”

But isn’t that unethical?

“Most certainly,” my contact responded. “It didn’t matter what his team said, if you didn’t respect his wishes, he would shun you and cut you off, eventually forcing you out of your position. Most of the real workers earned the bare minimum salary, living paycheck by paycheck, making it hard to walk away as they were essentially signed on as a false promise of things to come.”

My contact explained that F-Stop’s owner is very good at keeping up appearances and putting fears to rest, despite reality. “The man is a great salesman. Socially awkward at times, but a great talker. He can convince you to question yourself and often stumbles on his own lies. Unfortunately, that’s about all he can do. He shifts gears and jumps projects so often, he couldn’t get anything done. Everything that business professionals say not to do, he did it. If you asked him if a project was a failure, he’d pin the blame on an old employee and deny it was his doing.” 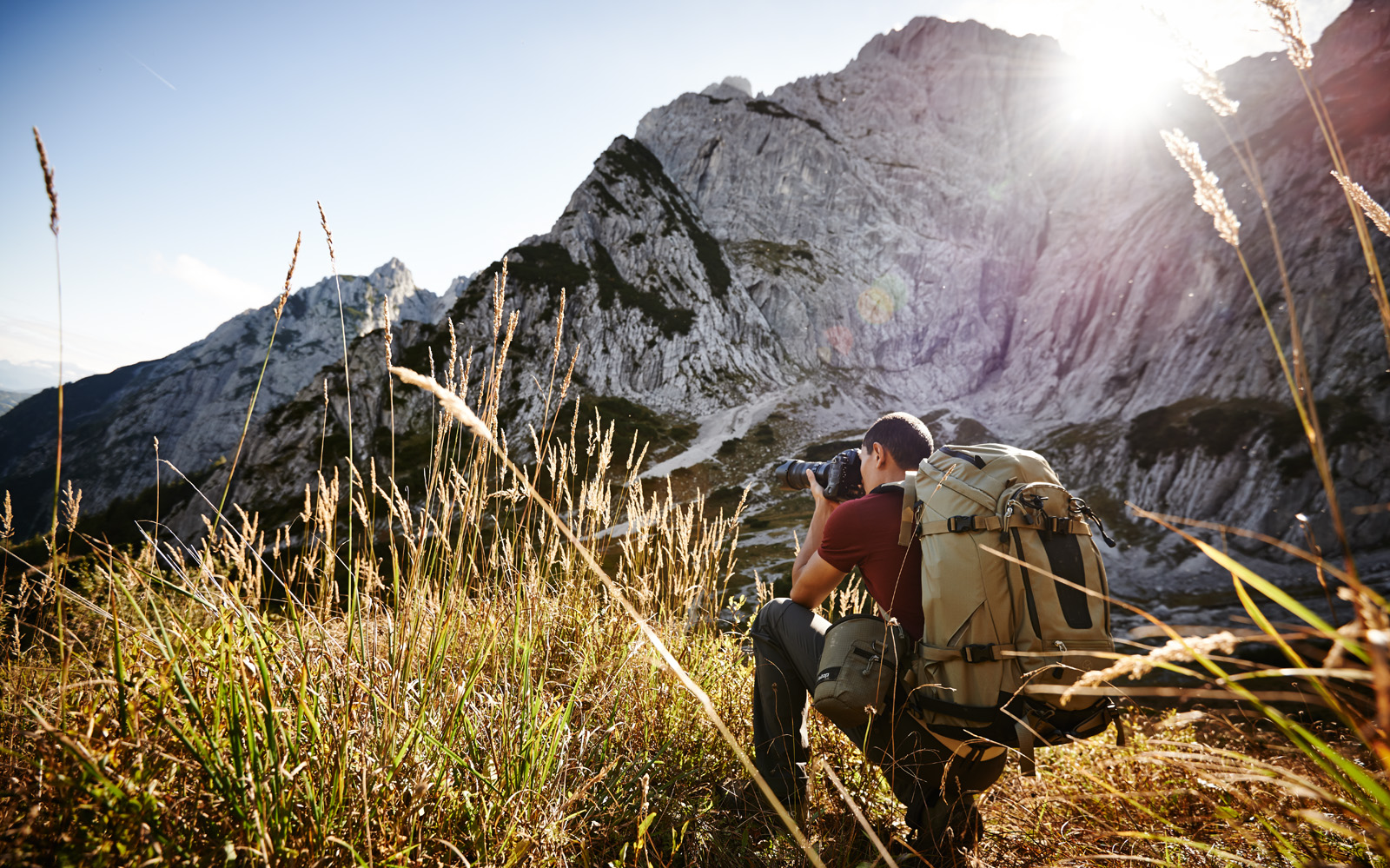 According to my contact, the CEO sold his employees on grand dreams and plans that he either never fully thought through, or never intended to complete. “The man is interesting… he thinks very highly of himself and talks huge numbers that are more hopes and dreams than reality. Everybody around him has since realized he’s just an impersonator playing a real businessman, and quickly distanced themselves from the ticking time bomb he is. The sad part is he’s still out there scamming businesses to support his lifestyle. It’s a real life story of American greed. In his wake is F-Stop… left crumbling without any money to hold itself up. They are millions and millions in debt and as long as the CEO is in charge, the company will not last and will likely be bankrupt in the next year.

My contact wanted to stress that F-Stop used to be a solid brand, with a solid business backing it up. “F-stop was a great company at one point. They worked with great people, had great customer service, and yes there were delays, but they offered loaners and eventually shipped out product as a genuine effort to provide the best service,” my contact lamented.

“They are millions and millions in debt and as long as the CEO is in charge, the company will not last and will likely be bankrupt in the next year.”

“But somewhere along the way, the values that created the foundation of the company quickly crumbled. All of our best customer service reps (photographers), all got canned for bogus reasonings. The supply chain team that made positive strides were accused of inventory mismanagement, which was a lie. And marketing had to play public relations relaying incorrect messages to an already hostile and anxious mob of customers.” 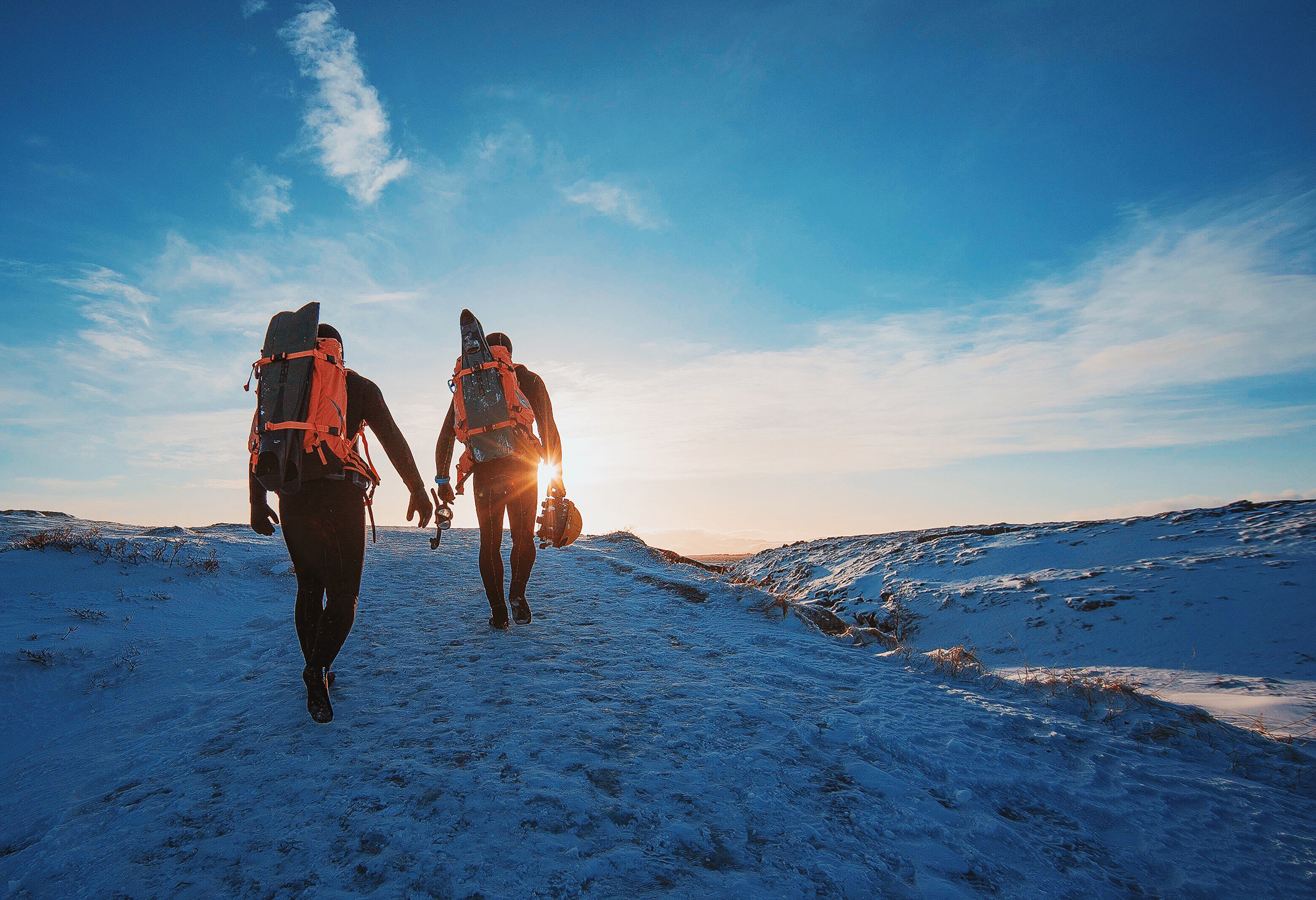 For example, my contact related a story where the owner took action not because it was the right thing to do, but because he wanted to make a point. “True story: The CEO once said he would set up a call center for optimal customer support, even though that wouldn’t really be necessary for a company the size of F-Stop. Well, somebody called the bluff, and he took action to prove that person wrong. So he spent money that should have been spent on inventory for F-Stop to instead set up an office and call center in Macedonia, relieving several very good and knowledgeable US-based customer relations reps to hire unqualified talent. Most have never used a camera or hiked a real mountain with a real backpack, yet they were expected to provide support to F-Stop’s customers.”

Back to the reason I originally looked into this: KitSentry. I asked my contact what they thought of the campaign, and the likelihood the product would get off the ground. “In regards to the KitSentry Kickstarter, it was a sham from the beginning,” my contact said. “A former colleague of the CEO apparently ‘stole’ an idea the CEO had and was trying to execute KitSentry in some form or another. Once that former colleague started creating public info about that product, the CEO got spooked and forced his now-former marketing team to create a Kickstarter campaign to raise funding for a half-baked product. Once the funding was raised, he transferred all the funds to himself, leaving nothing to the actual development team to spend on creating KitSentry itself.”

Needless to say, we really wanted to hear from F-Stop on this. I greatly trust the contact who provided the insights above, and have no reason to believe that the story would be made up. That said, it’s something that would really be better illustrated with input from F-Stop directly.

But F-Stop’s silence is deafening.

My original goal was to shed some light on a failed Kickstarter, and to help the backers either get the product they were promised or to get their money returned. But based on what my contact told me about the state of the company, neither of those options seems particularly realistic.

“Nobody from the original marketing team is there,” my contact told me. “The office in the U.S. once had 15 workers and now has one working for F-Stop. The company is based in Saint Louis and because they are in so much debt and being sued by so many people, they’ll likely move the company overseas after declaring bankruptcy.

“[As for] KitSentry… nothing will happen. It’ll die alongside the company in the U.S. Nobody that was involved with it early is even there anymore. All the people that were involved with it didn’t want to do it. They only did it because they were forced to do it.”

UPDATE 08/07/2016: F-Stop has officially announced the failure of the KitSentry Kickstarter, and backers will not be reiumbursed. Story.