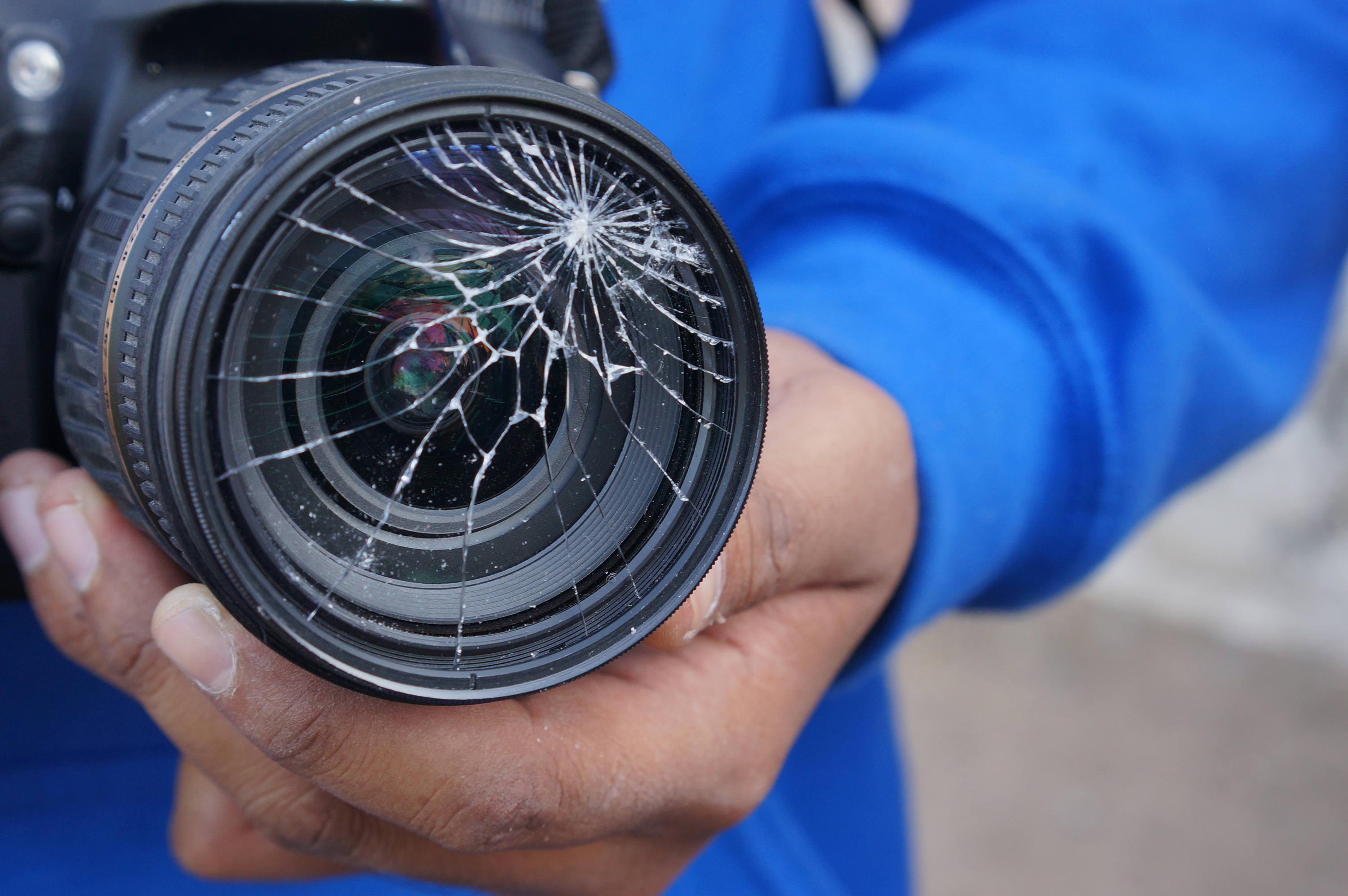 When I came across Snappr, an Australian startup company trying “to change the world of photography” by making shoots “quick and snappy,” I began to understand how yellow cab drivers felt when Uber hit the streets: frustrated, subverted, and a bit threatened. I mean, in just a few clicks you can instantly book a shoot with a “top 10 percent” photographer beginning at only $59 (that’s $44.99 in USD)! How could I ever make a living in photography when things have become this cheap and easy? But after some research, I realized that Snappr and Uber are far from analogous. That is, because Uber is providing a highly efficient, mutually beneficial service for its customers and, arguably, its employees, while Snappr is blatantly devaluing its staff and the photo industry with every credulous click on its Book Now button.

Harsh? Well, let me explain everything wrong with this business model—and also the other side of my argument, so you can decide for yourself. 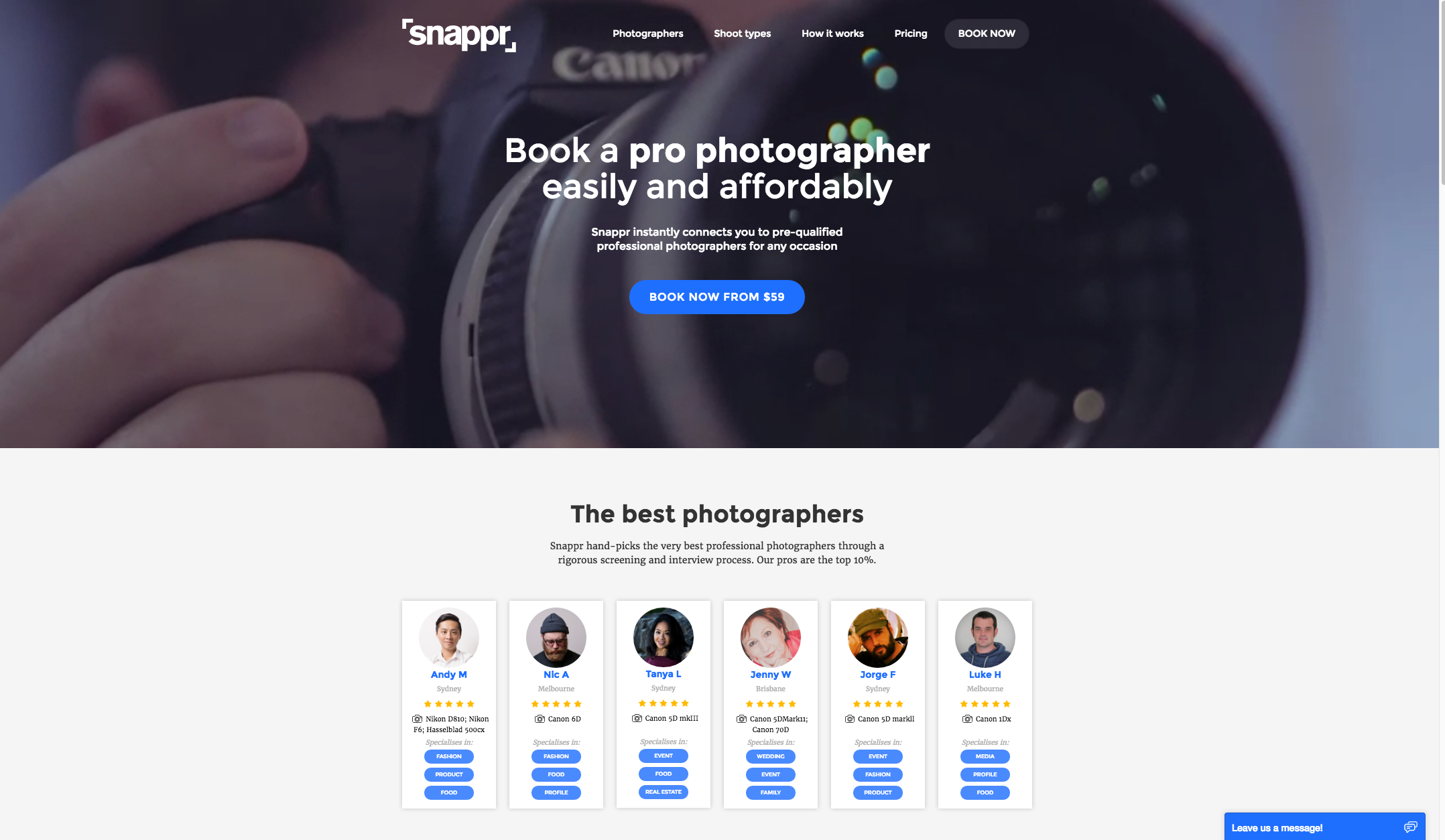 These days, most photographers work as freelancers, meaning their income is earned on a job-to-job basis. For some, this means working a high quantity of lower budget shoots; for others this means grinding to land a few big jobs that will make or break their year. In either scenario, none are met with “steady” income, as they survive by budgeting their profit from each individual job. And in order to continue working, they must build their reputation by producing high quality work that makes the client happy and ready to hire them again.

But Snappr, however, is bringing rates down so low that no one could possibly feed themselves off a photography gig. This could effectively set a new precedent on how much photography is actually worth, destroying the professional standards of the industry. Why would a couple hire a wedding photographer for $2000 a day when they could get a two hour session off Snappr for $113.38? You could say you get what you pay for—that you lose the quality of work—but really, it’s a scary thing to think about: photography being bought and sold as a product rather than a creative service. 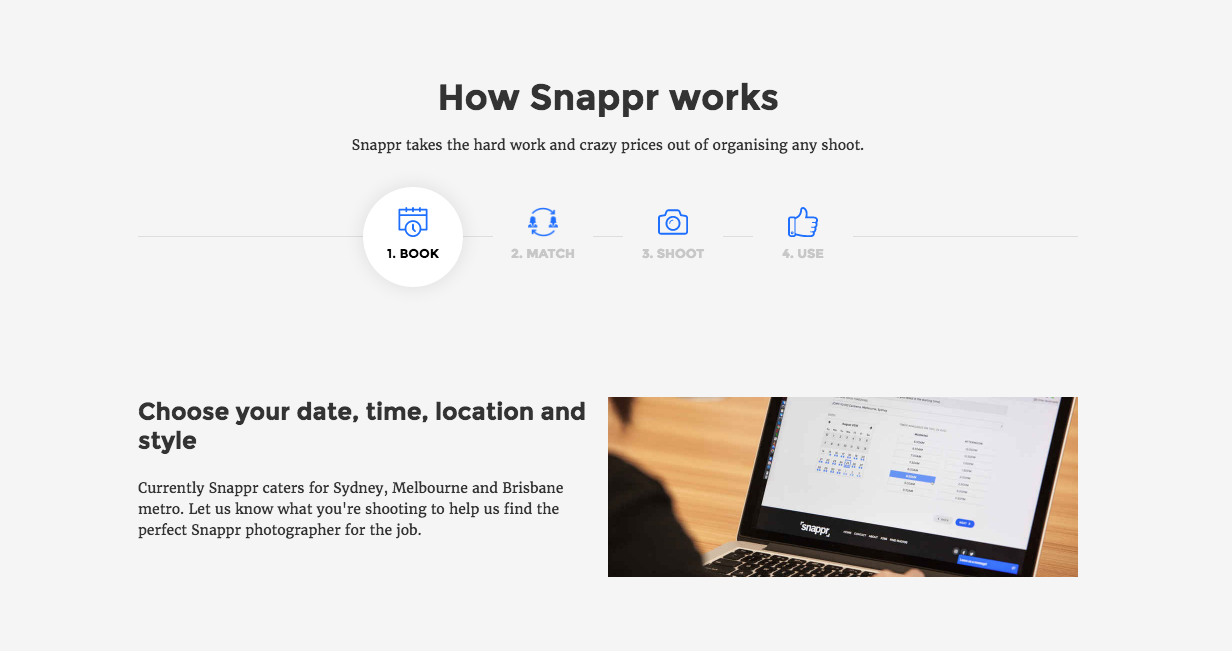 So on one hand, you have the professionals, who wouldn’t dream of working for Snappr’s rates. But on the other, you have the amateurs hungry to break into the industry with little means to do so. By this, I mean they likely work full-time jobs, have no formal training, but are nonetheless shutterbugs with a keen eye for imagery (and often a thriving Instagram feed). For them, Snappr’s providing a new vertical to gain experience, clients, and entry into the industry, one that doesn’t require them to quit their jobs or risk financial downfall.

“Snappr is not devaluing the industry or the professionals. I think they are exploring a new market, a new category,” says Hugo Lopes, a photographer who signed up for Snappr but decided against it because the prices were too low. “They’re encouraging people to hire a professional, even if it’s not a high level professional. I think they’re helping to make professional photography accessible to everyone. And it’s up to each professional, to decide whether to participate or not and evaluate if the amounts paid are worth it.”

“…the quota is a minimum of 60 shots per hour of shooting.”

So to find out if it’s worth it, I contacted some of the photographer’s featured on Snappr’s Instagram, as the company’s website offers no direct contact info for its photographers. Not even a last name. 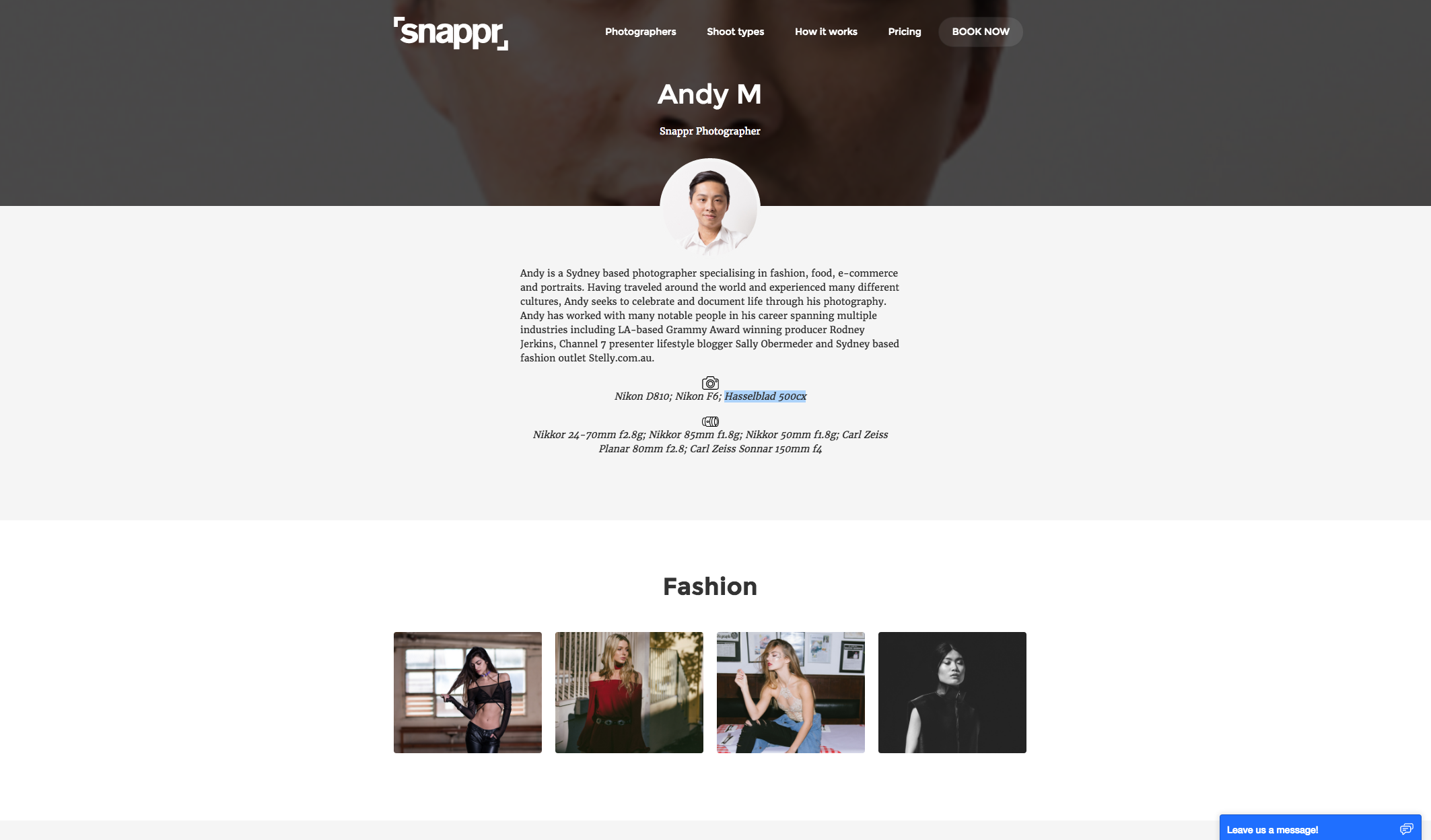 “I received an invitation from them a while back, but never shot for them or confirmed any agreement to shoot for them,” said a Melbourne, Australia based fashion photographer. “I found the pay wasn’t alluring—e.g. $300 for a 7-hour shoot. And the post process may not be fit for the type of work I do. After the shoot, retouched images need to be uploaded to an online gallery for the client to consider, and the quota is a minimum of 60 shots per hour of shooting. This may be fine for events and the like, but on the fashion side of things it’s a lot of work for that kind of money.”

“I guess at the point of signing up I was in a position where I was willing to devalue myself for the sake of getting any photography work,” said a Sydney, Australia based travel photographer. “I’m no longer in that position, so I don’t want to support these companies that capitalize off amateurs and desperate photographers, offering ‘exposure’ or some pathetic compensation that barely covers the cost it took to create the work. So I didn’t follow through.”

Snappr also claims that it “hand-picks the very best professional photographers through a rigorous screening and interview process,” so I asked Lopes what that was like.

“I really don’t know how they treat that internally or who evaluates the portfolios, but I was requested to submit my work when subscribing, and a few days later I received an e-mail saying I was accepted,” he said. 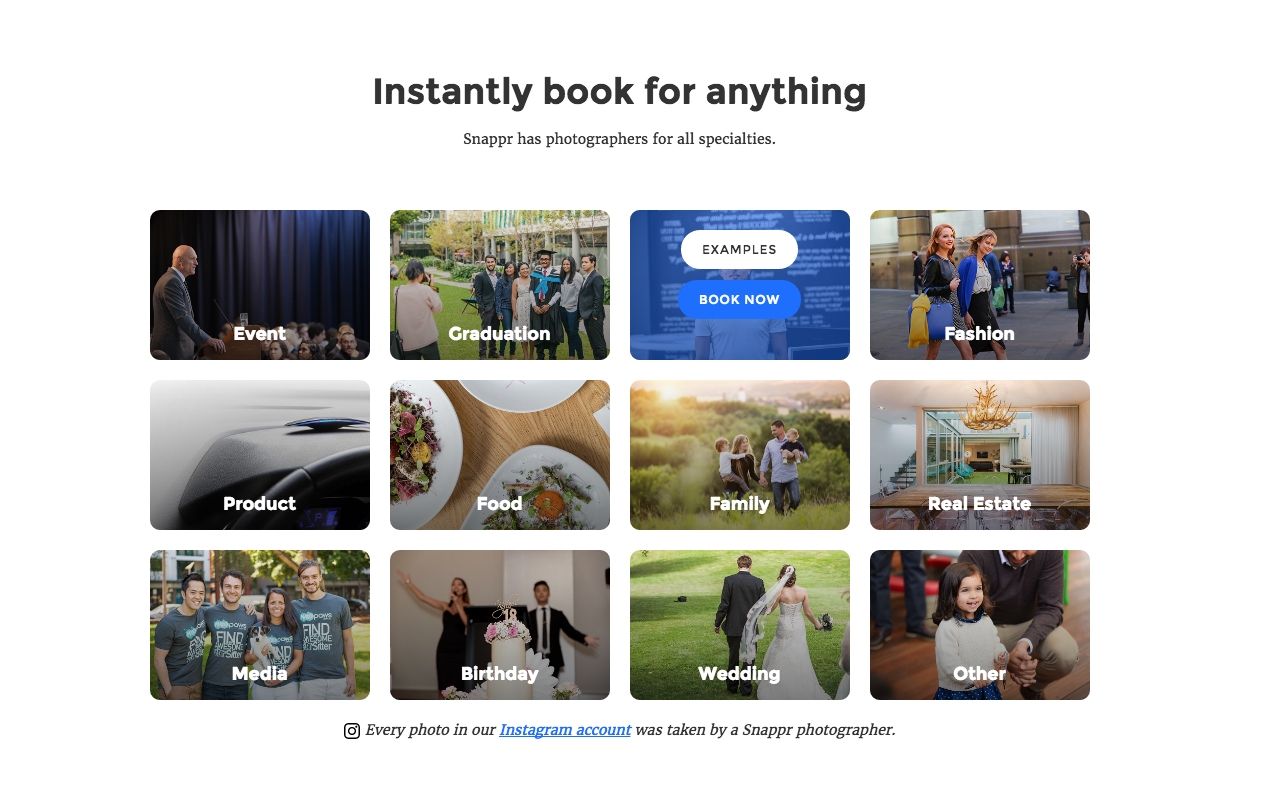 Still, it comes with no surprise that a platform like Snappr has surfaced. In recent years, tech companies offering new market distribution, from Uber and Seamless to AirBnB and InstaCart, have disrupted nearly every traditional industry.

In 2010, for example, the online marketplace Fiverr launched, offering a range of creative services for just $5, such as graphic design, writing, and illustration. Like Snappr, it’s easy to wonder what you could possibly get for that cheap, and you could argue that it’s devaluing freelance workers. But according to a recent Fast Company article, that was never the founders’ intent.

“The founders had a hunch the price would give freelancers ‘a way to slice their skills thin enough,'” Fast Company writes. “They were right. Freelancers began signing up in droves.”

Since then, Fiverr has expanded far beyond $5 services with rates that exceed $8000. The company is worth millions, and it’s been reported that some freelancers are earning over $20,000 a month. But there’s no telling if the same goes for Snappr, as its fixed pricing shows that freelancers have no control over their rates—and also because our request for comment has yet to be answered (we will update you if it is).

UPDATE, Aug. 29, 2016: We spoke with Snappr CEO Matt Schiller to learn more about Snappr and discuss the concerns of depreciating the photo industry. Read the full interview here.