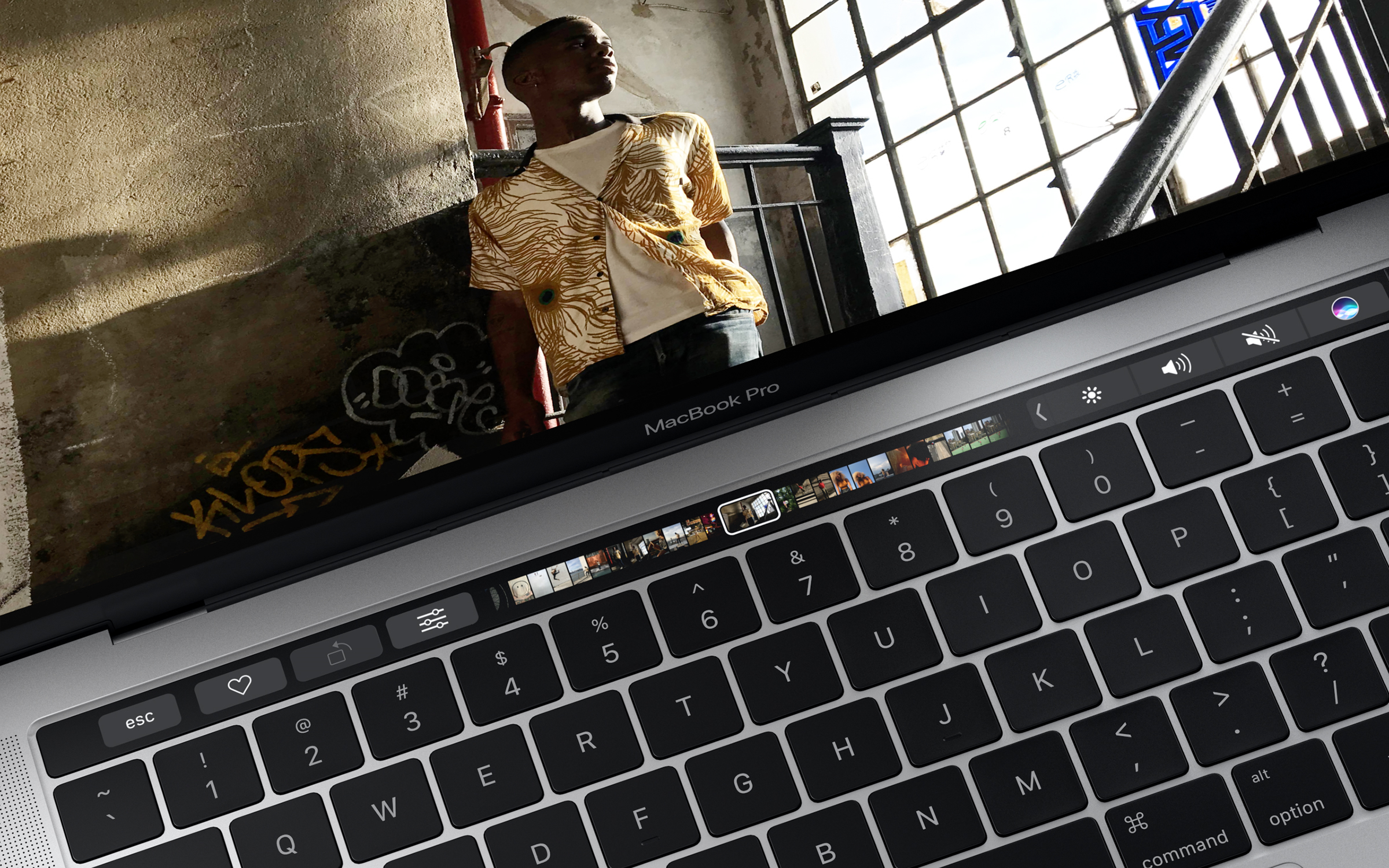 Though the new Macbook Pro notebooks have a lot to offer as an upgrade over previous models, Apple spent the majority of their presentation on what the new Touch Bar can offer users, and it does look interesting. Adapting to whatever application you have open, the Touch Bar is a bit of a compromise between having a touch screen and not, and addresses the concern many creative imaging professionals have with the tactile, intuitive nature of touch melded with the annoying issue of fingerprints scuffing up a workspace. 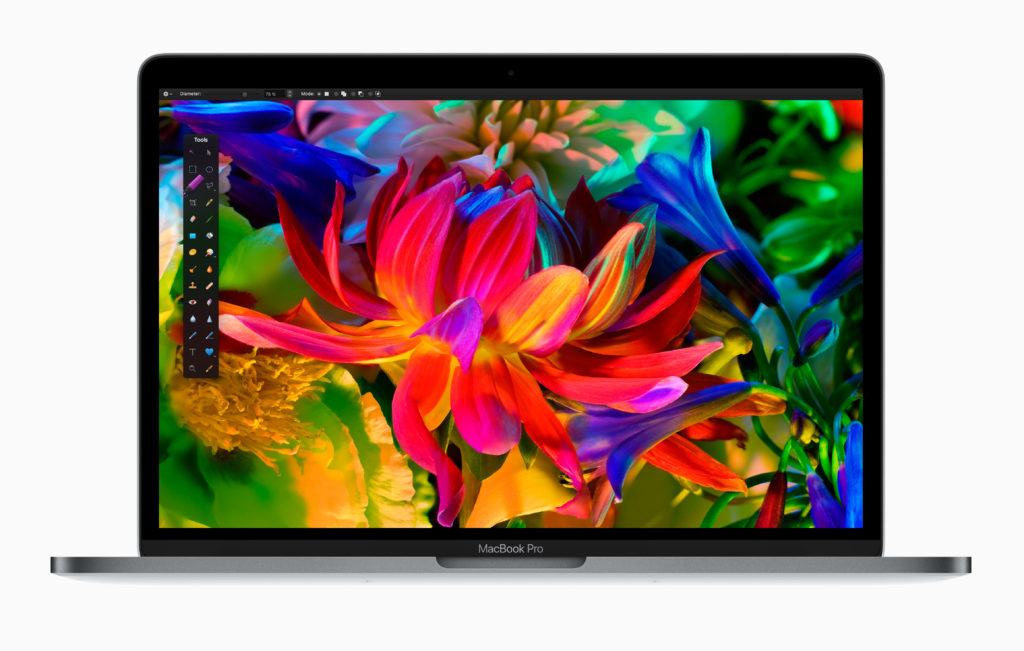 The Touch Bar places controls right at the user’s fingertips and adapts when using the system or apps like Mail, Finder, Calendar, Numbers, GarageBand, Final Cut Pro X and many more, including third-party apps. For example, the Touch Bar can show Tabs and Favorites in Safari, enable easy access to emoji in Messages, provide a simple way to edit images or scrub through videos in Photos and so much more.

It’s an interesting compromise to say the least. Greg Kumparak put it best when he said, “I’m torn on this. It’s gorgeous, but SO much of using a keyboard — at least for people who grew up on computers — is muscle memory. If the buttons are constantly changing from app-to-app and on a separate display below my line of sight… will I actually use them?” 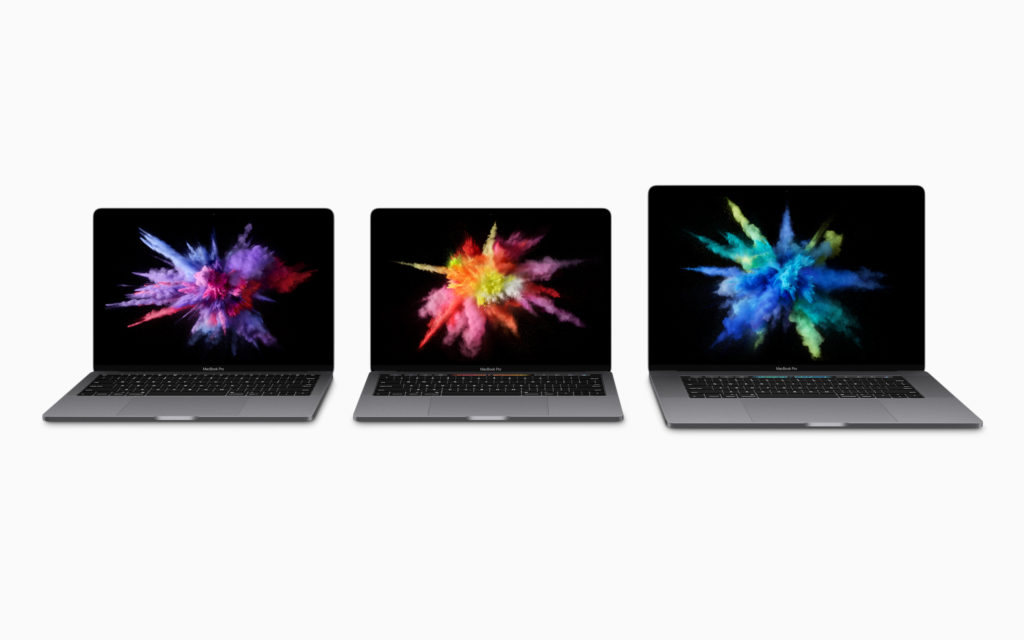 And that’s a totally fair point. The bar will change frequently, and the location of features with it. That means that you’re not going to be able to easily muscle memory the location of features, especially if you use more than five or ten applications that each come with unique functionality. It’s a great idea, but it has yet to be seen in practice as actually being helpful.

Looking at what Apple showed for Final Cut, I am personally quite excited. Having a dedicated bar for scrubbing that allows me to better distribute space on my monitor looks like it’s going to be amazing. I hope Premiere adds this in as functionality later, as they already confirmed Photoshop will have compatibility by the end of the year (and we saw it in the demo).

The new bar also includes a Touch ID space, with a dedicated chip on the opposite side of the boy under the new aluminum housing. If you use Touch ID for purchases as much as I do, this sounds like a very welcome feature.

The monitor is Apple’s best on a portable device, and is far brighter than its predecessors.

The best Mac display ever delivers images that are more vivid, reveal even greater detail and appear more lifelike than ever. As thin as a MacBook display at .88 mm, the Retina display on the new MacBook Pro at 500 nits of brightness, is an amazing 67 percent brighter than the previous generation, features 67 percent more contrast and is the first Mac notebook display to support wider color gamut. And with power-saving technologies like a larger pixel aperture, a variable refresh rate and more power-efficient LEDs, the display consumes 30 percent less energy than before.

Here is a snapshot of the guts of the new machines:

Powerful processors, cutting-edge graphics, blazing-fast SSDs, high-speed memory and an advanced thermal architecture deliver amazing pro-level performance in a dramatically thinner enclosure. Sixth-generation dual-core Core i5 with eDRAM, dual-core Core i7 with eDRAM and quad-core Core i7 Intel processors deliver pro-level processing performance while conserving energy. The new 15-inch MacBook Pro features powerful Radeon Pro discrete graphics delivering up to 2.3 times more performance than the previous generation; while the 13-inch MacBook Pro comes with Intel Iris Graphics that are up to two times faster than before. All models feature SSDs with sequential read speeds over 3GBps and Thunderbolt 3, which consolidates data transfer, charging and twice the video bandwidth in a single port — allowing users to drive a 5K display and power their MacBook Pro with a single cable.

The Macbooks come in either 13 or 15 inch varieties, and here are your options when purchasing: 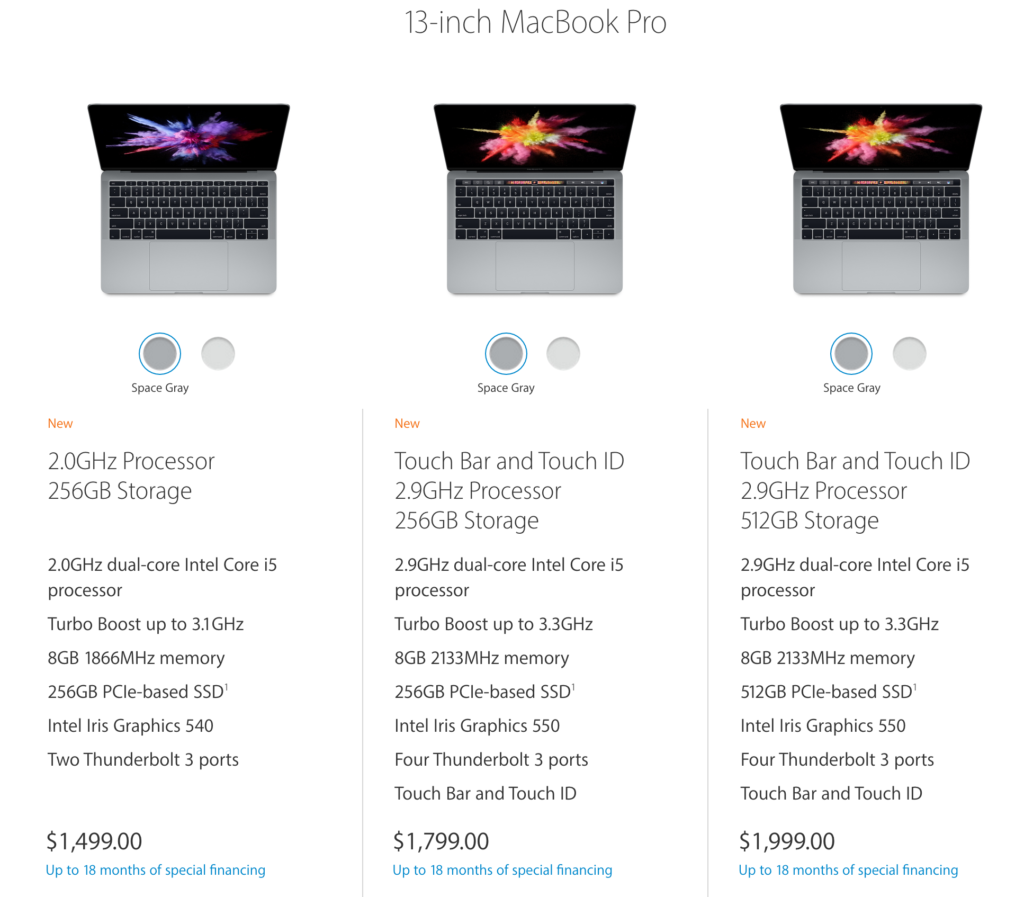 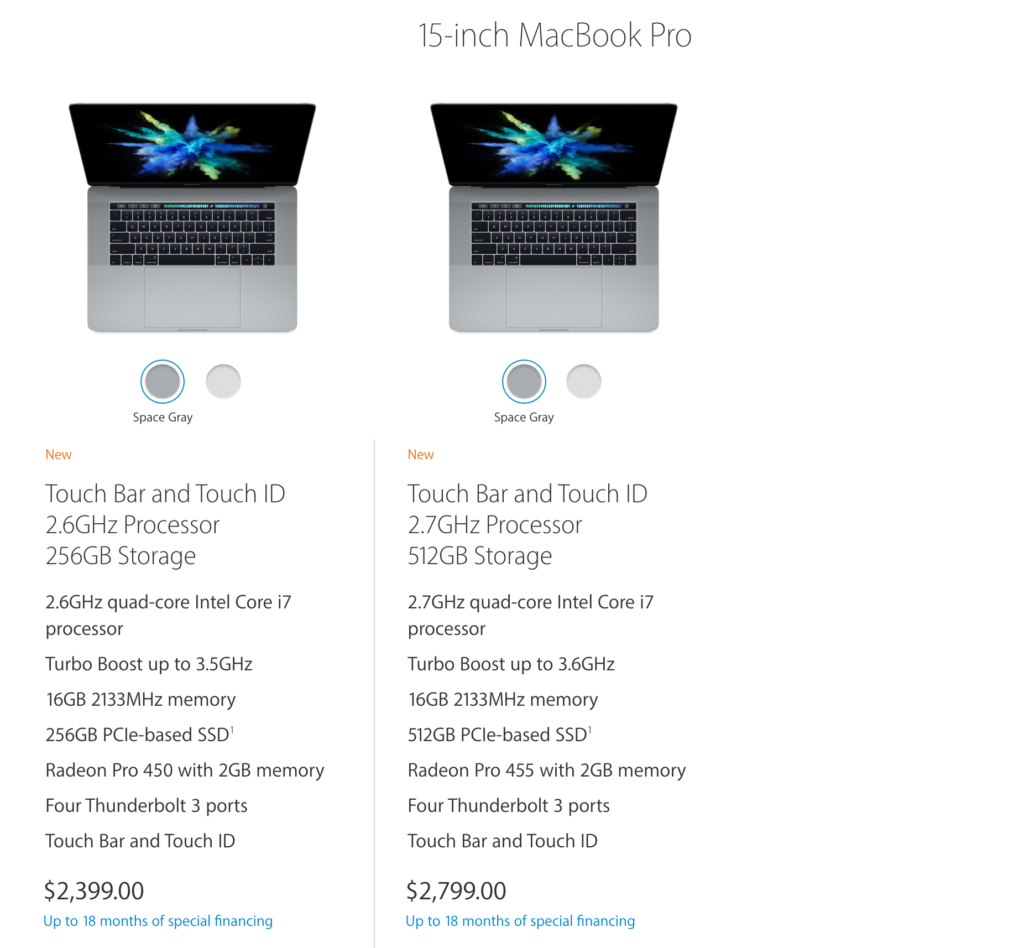 You might notice that the 13 inch doesn’t appear that impressive compared to what is already out there, and you would be right. Here are the specs directly off a 2014 Macbook Pro, 13 inch and you’ll see that the processor is better than you can presently buy on the new versions. 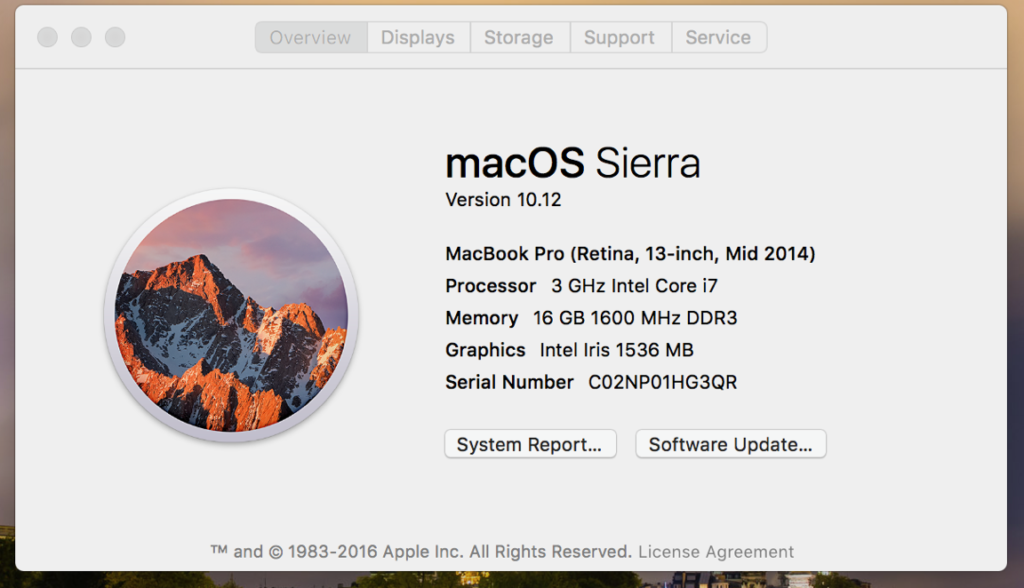 Even if I was willing to spend as much as possible, you still can’t get a full 3 GHz out of even the most busted-out Macbook Pro: 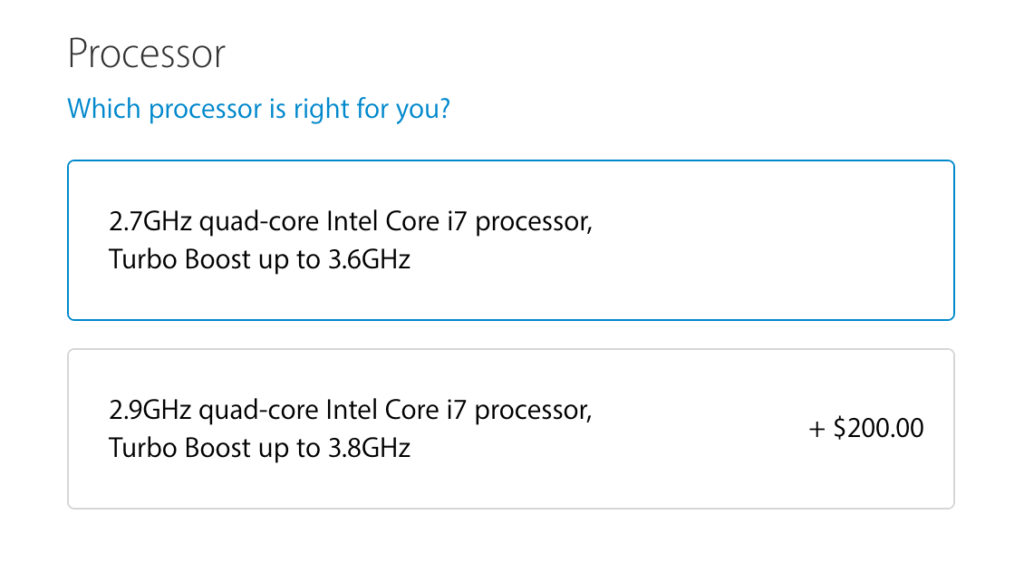 That is a bit confusing.

Moving on, here are a few other features that are of note on the new machines (described directly by Apple):

All in all, I do like the direction these have gone. They ditched USB-3 and Thunderbolt 2 in lieu of Thunderbolt 3, which you can get four of on either size. These ports can be used for power, monitors, data streams, or whatever else you might need to plug your machine into. The only downside is the lack of support for Type-C connections right now, but that is changing.

Despite these awesome sounding claims…

…unfortunately, all the machines feel, well, underpowered. They don’t blow you away with raw speed, and on paper the specs are… low. 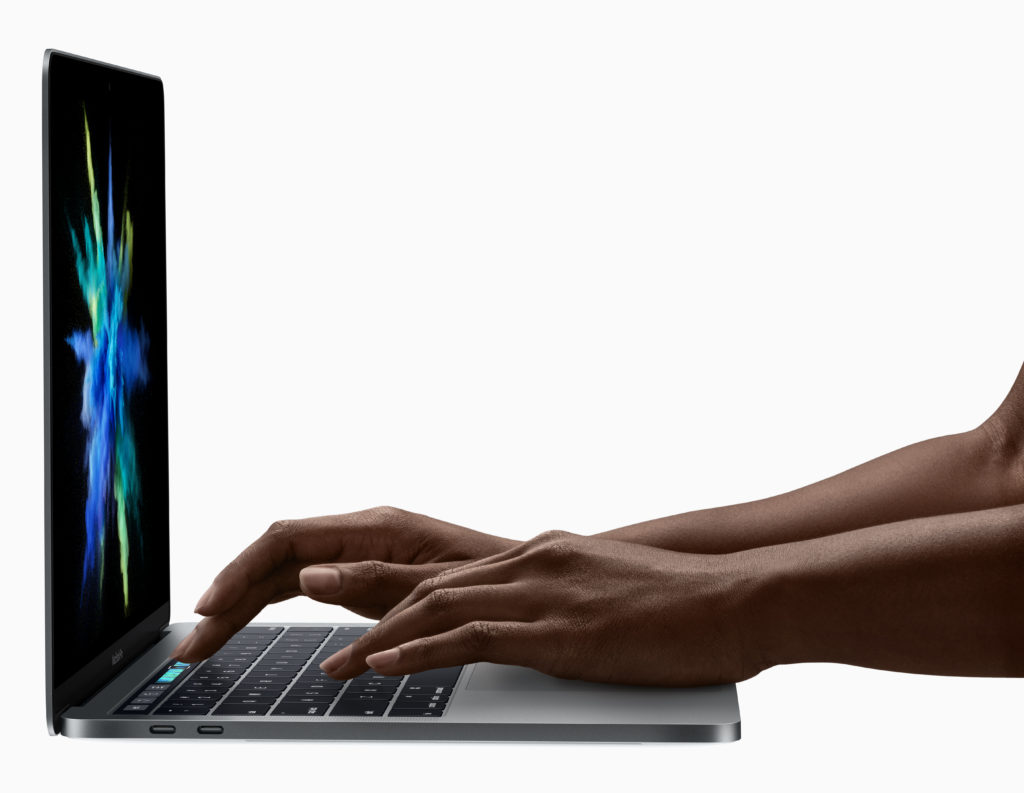 For the first major computer revamp in quite a long time, there is a lot to love, and a lot to scratch your head at. For the prices Apple is asking for these, you would hope (well, actually expect) to be blown away. I was planning to buy one right off the bat. Now I’m determining if the touch bar is worth losing processing speed.

UPDATE: It appears that the 13 inch model can exceed the former Macbook options, but the 15 inch cannot. Take a look here, as the 13 inch can get a processor boost up to 3.3 GHz. That’s great! Why isn’t that in the 15 inch!?

What do you think? Let us know in the comments below.