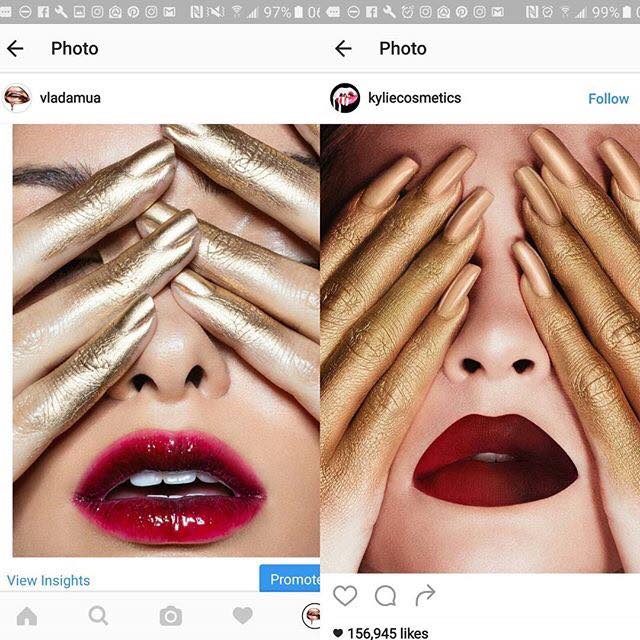 Julia Kuzmenko is an established and highly successful beauty photographer and retoucher based in Los Angeles who had recently collaborated with makeup artist Vladamua to create photos as part of a “SEE NO EVIL, HEAR NO EVIL, SPEAK NO EVIL” story. The below image was posted a couple months ago…

When you look at the images side by side, it’s no surprise that Jenner is being accused of theft.

The images are remarkably similar, from the posing to the colors chosen. Personally I prefer the original, but taste is of no importance here. Either this is a massive coincidence, or Kylie’s crew were heavily influenced by Julia’s image.

I don’t believe in coincidences.

According to The Shade Room, this isn’t the first time Kylie has been accused of stealing something.

When Kylie first dropped her lipkits, people accused her of stealing ColourPop’s lipstick formula. Kylie clapped back at her accusers saying, “we’re not the same” and that she had “an exclusive formula” she created herself.

Kylie was then accused of stealing a makeup artists eyeshadow palette for her “KyShadows,” as well imagery from LA make-up artist Vlada Haggerty, who is now accusing Kylie of stealing yet another one of her ideas.

What do you think? Coincidence or stolen concept? Let us know in the comments below.