Regardless of political affiliations, everyone can appreciate a stellar photograph that invokes a sea of moods and emotions and appeals to multiple messages and viewpoints. Esteemed photographer, Nadav Kander was able to do just that, with his latest portrait of President-elect Donald Trump for the cover of Time Magazine’s ‘Person of the Year’ edition.

Donald Trump has had a year of harsh criticism during his political run for Presidency, and one of the harshest critics has been Time Magazine themselves, writing multiple opinion pieces questioning his temperament and experience to hold the highest office. That said, announced today, Time Magazine chose to name Donald Trump, the ‘Person of the Year’ for his nonstop publicity, a title that has been previously held by Bill Clinton, Barack Obama, Mark Zuckerberg, Adolf Hitler, and even You, in 2006. 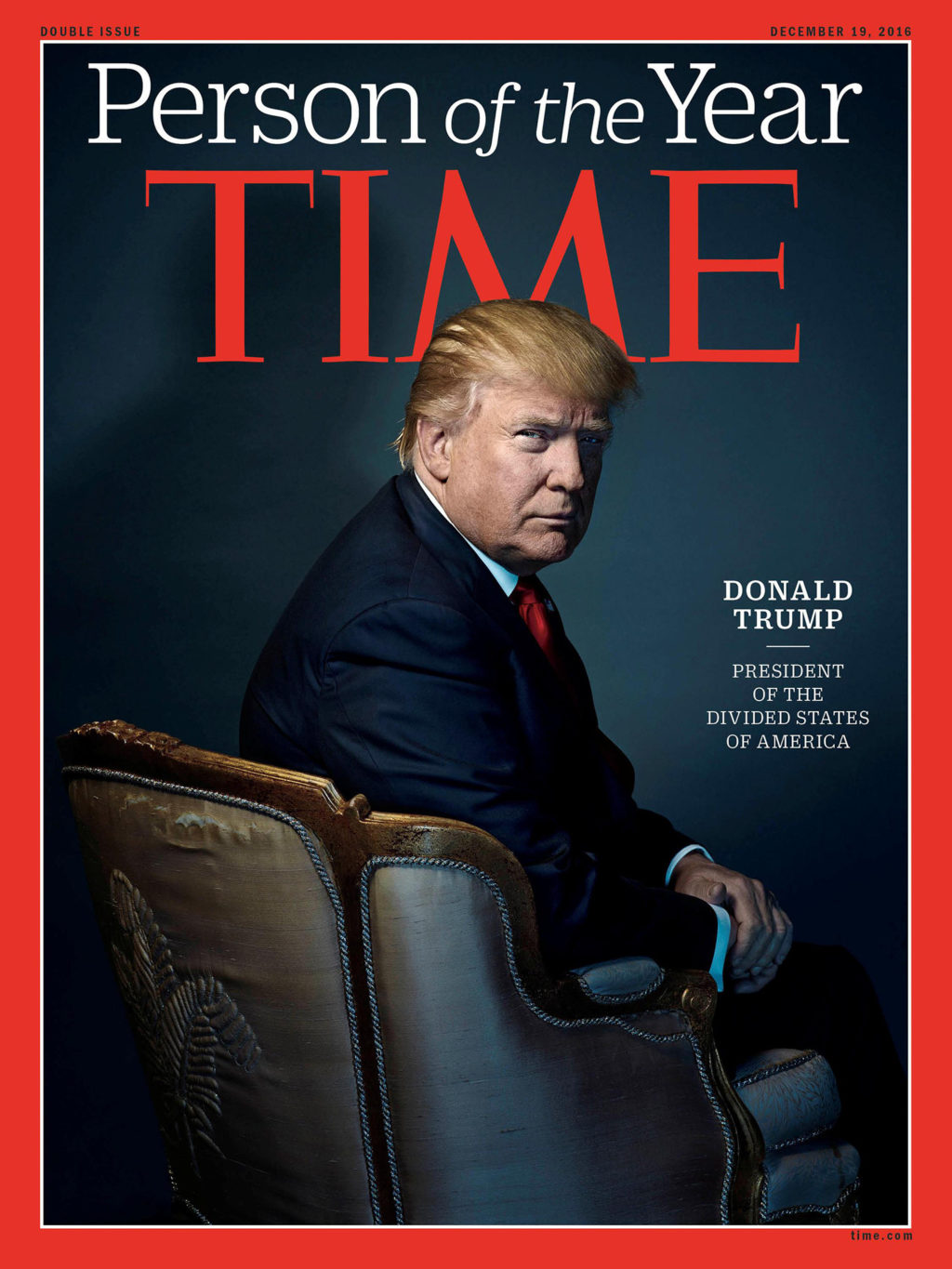 Regardless of your stance on Donald Trump, it’s clear that Nadav Kander and Time Magazine’s editorial staff has sent a strong message with the release of their new cover, so let’s take a moment and break down what makes this photo so powerful and iconic, and a message from Time Magazine.

The first thing you’ll notice is that his body is turned away from the camera, and he’s leaning outward, pushing his face towards the camera. The body language immediately shows stiffness, and with a sinister overtone. Additionally, the image is shot with the camera below him, making his eyes shift downward toward to the viewer, as a potential play on his lifelong wealth, and history of looking down towards other classes of people.

His general body language is stiff, with his hand clasping his own wrist, often a sign of distress, as he sits on a beaten and worn chair – a tattered throne which was once great. His back is hunched, and his general positioning is not something you’d find in photographs, let alone on the cover of one of the most iconic publications. Inscribed on the back of the chair is a fern – a symbol of sincerity, which now sits nearly worn away with age and abuse.

The lighting is a spotlight, likely a Fresnel or other light that provides direct and controllable lighting. The spotlight effect could easily symbolize his life in the spotlight, especially in recent years as a Reality TV star. However, his shadow is from an entirely different direction, and adding an overhead shadow figure on the wall behind him. Perhaps an homage to Mark Twain, who once said: “Everyone is a moon and has a dark side which he never shows to anybody.” or a play on old monster movie covers, which often displayed the creature as a shadowy figure in the background.

And perhaps the most obvious display towards Time Magazine’s distrust in Donald Trump comes in their logo. As photographer Nicholas Freeman pointed out on his social media, the ‘M’ in Time forms devil horns on the head of Donald Trump, a clear play towards how many have referred to him and his message being that of an anti-christ figure.

If this isn’t telling enough, the added caption “President of the Divided States of America” certainly adds the final period to a very polarizing image of President-Elect Donald Trump.

For others, Time Magazine has had a long history of putting simple, and often, sympathetic headshots on the cover of their ‘Person of the Year’ editions. Rarely, do we see a full body shot or even a subject that is posed in a chair or with other props.

Regardless of political stance, Nadav Kander and the Time team has done an incredible job sending a message with their latest cover and proved to us that a picture really is worth 1000 words.

For more information about this shoot, as well as additional photos, check out Time Magazines Behind the Scenes page. Special thanks to Nicholas Freeman and his help with pointing out some of these subtleties.