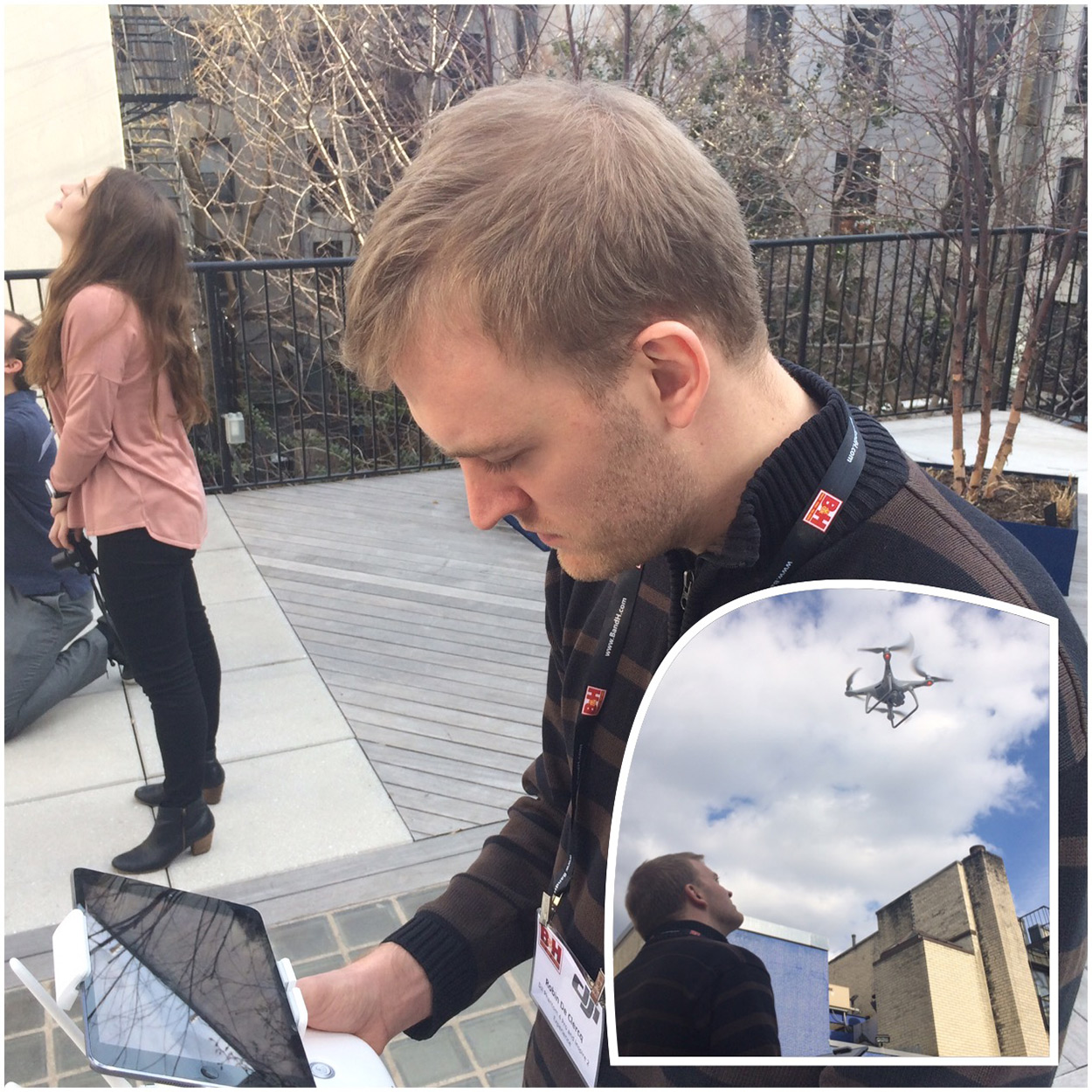 I Flew a Drone for the First Time, Off the Patio of a Manhattan Studio

I had never flown a drone before in my life, so when I received an invitation from B&H to attend an exclusive DJI event I couldn’t really say “no.” The drone giant would be presenting their two new flagships—the Inspire 2 and the Phantom 4 Pro—on February 2 at BathHouse Studios in Manhattan’s East Village.

The middle of the room featured two tables, one for each drone (with leaflets and signs full of specs nearby of course), while drone footage was projected on a the wall. B&H and DJI sure knew how to welcome their guests, but would they also let me fly a drone in Manhattan?

But before any of that, Michael Perry, Director of Strategic Partnerships at DJI, came out and basically regurgitated the press releases that had been sent out months ago, and this would have been a very boring half hour had I read my editor’s coverage (Phantom & Inspire) before coming here. Fortunately for Perry, I hadn’t (sorry, Jaron!), and here’s what stood out from his talk:

The Phantom 4 Pro has a 20MP 1-inch sensor capable of capturing 4K videos at 60fps with a 100Mbps bitrate—an insane increase since the Phantom 4’s 60Mbps, not to mention the upped frame rate. It stays in the air up to 30 minutes and flies at a maximum 31 miles per hour with full obstacle avoidance in five directions. The controller also no longer requires you to use an iPhone or iPad, but comes with a built-in screen that has has an impressive level of brightness (1,000 nits- iPads run at about 400-450 nits). And all of that comes with new and updated flight modes.

High-end aerial image makers are already marveling at DJI’s Inspire 2. The thing that struck me the most in this aerial beast was that it not only comes with a high resolution “main” camera, but also with a second two-axis camera that allows the pilot to always see where the drone is going while a photographer or videographer does the actual shooting. Additionally, the drone’s max speed and battery life got a much-needed bump and the Inspire 2 can also be controlled from —brace yourself— up to 4.3 miles away. 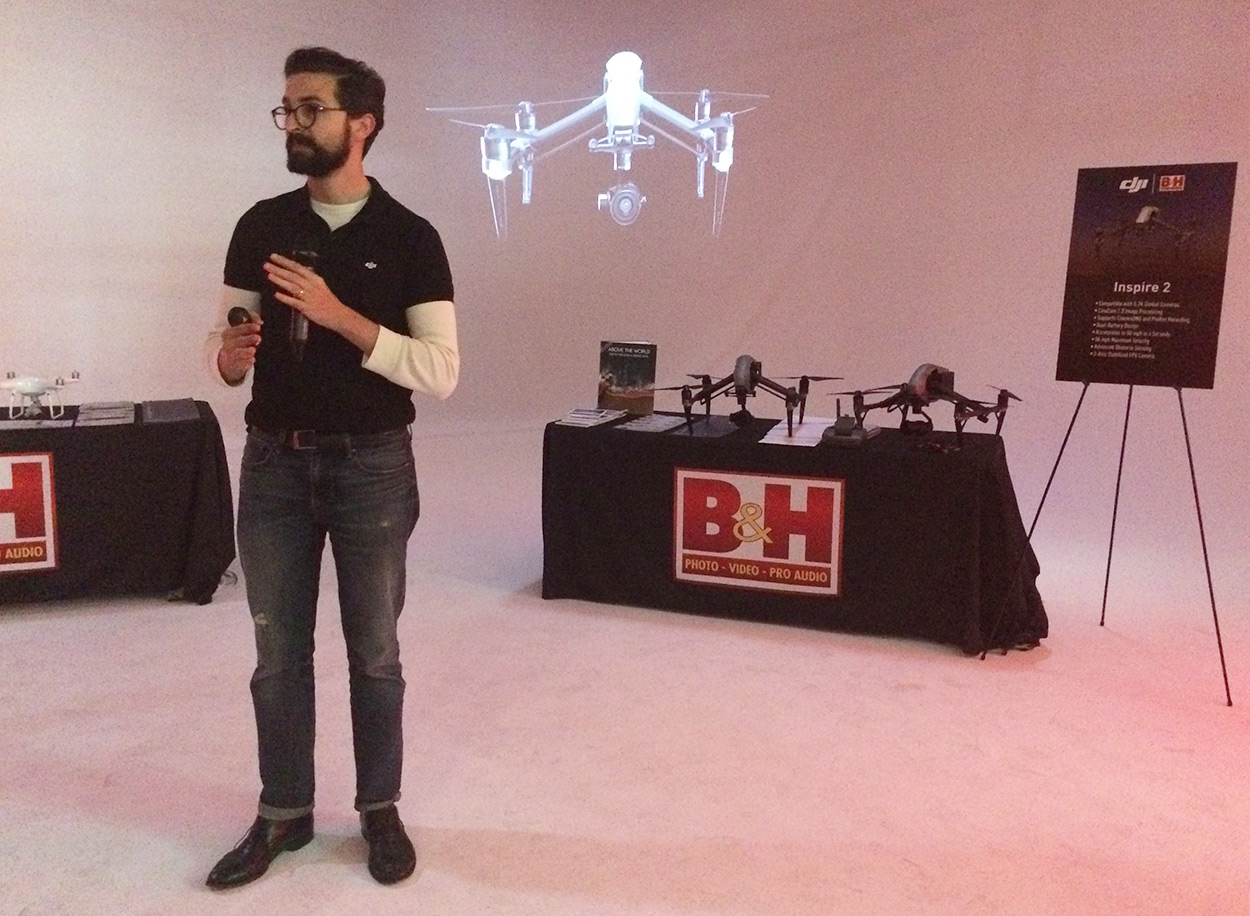 That’s all very impressive, but I came here to fly a drone, and for that I had to go to the Bathouse Studios patio on the third floor. A DJI representative was waiting for me and quickly offered me his Phantom 4 Pro controller. I sensed mild panic emanating from him when I told him it would be the first time ever I would be flying a drone, but we went through with it anyway.

And it was awesome.

When they say that the Phantom 4 Pro is “easy to fly,” they do actually mean it’s easy to fly. I was the type of kid that even struggled to correctly use my PS1-controller back in the days, but I had mastered flying this drone within minutes. Like someone said in the presentation room: “it’s like flying remote control helicopter, only a 1,000 times easier.” 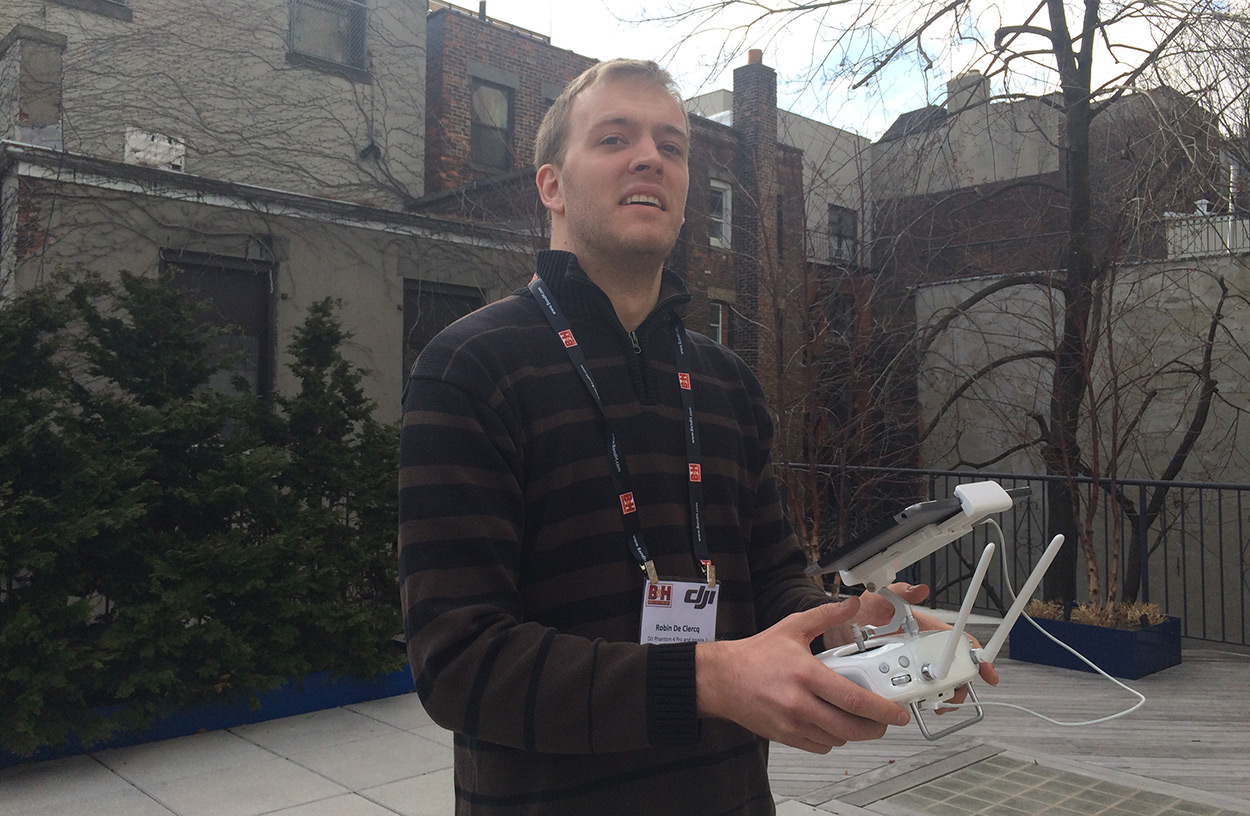 My drone swiftly zoofed up and down and from left to right, and rotated lithely when I asked it to. It was, simply put, impressively agile. All the while, the screen consistently showed me high quality footage. A 4Kp30 video or a 20MP RAW photo? I had it all at my fingertips.

The drone’s stability was another amazing thing. Winds were gusting pretty hard where we were standing, and we were even surrounded by buildings. My Phantom 4 Pro must have been battling much stronger winds many feet above us, but still showed perfectly stable footage. 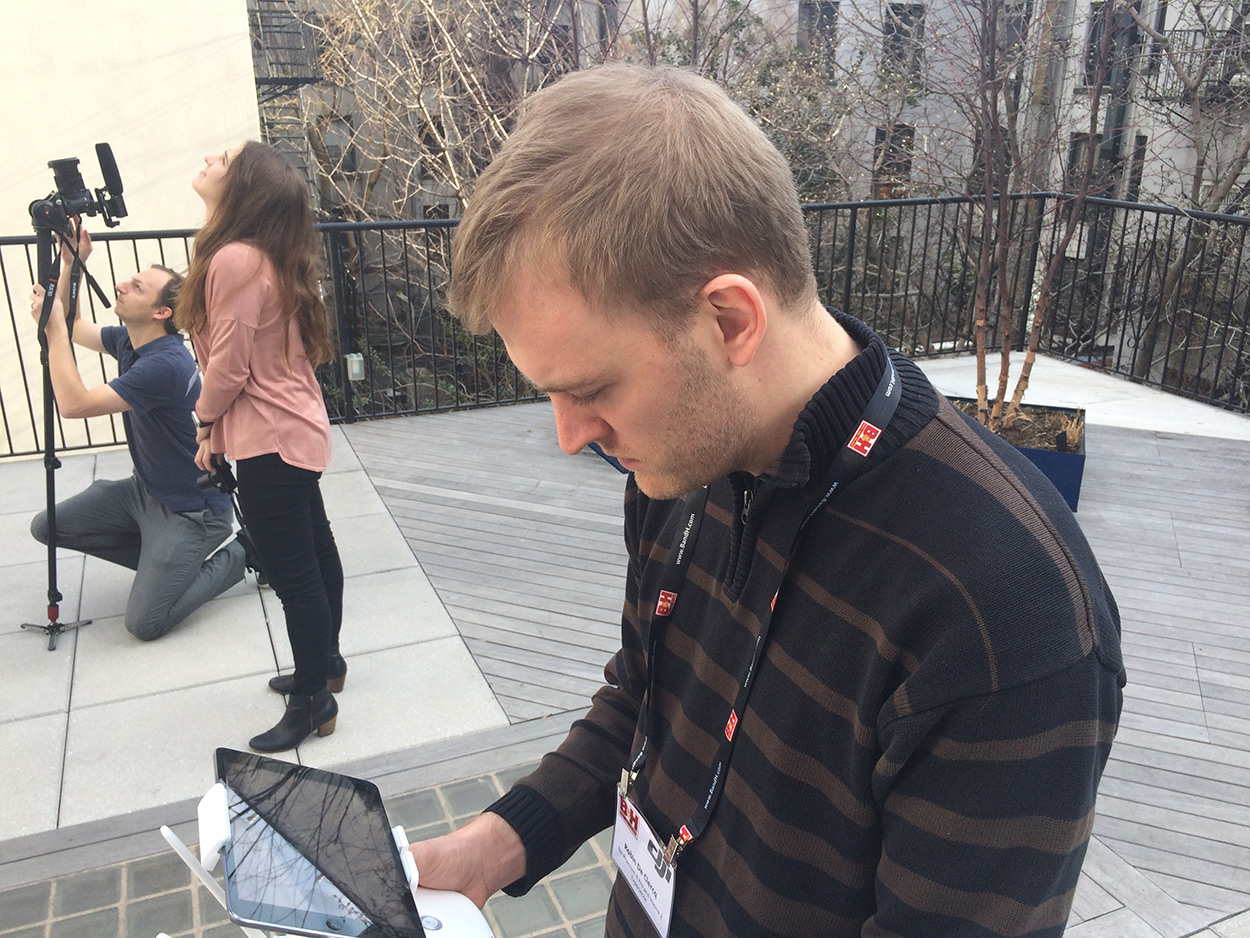 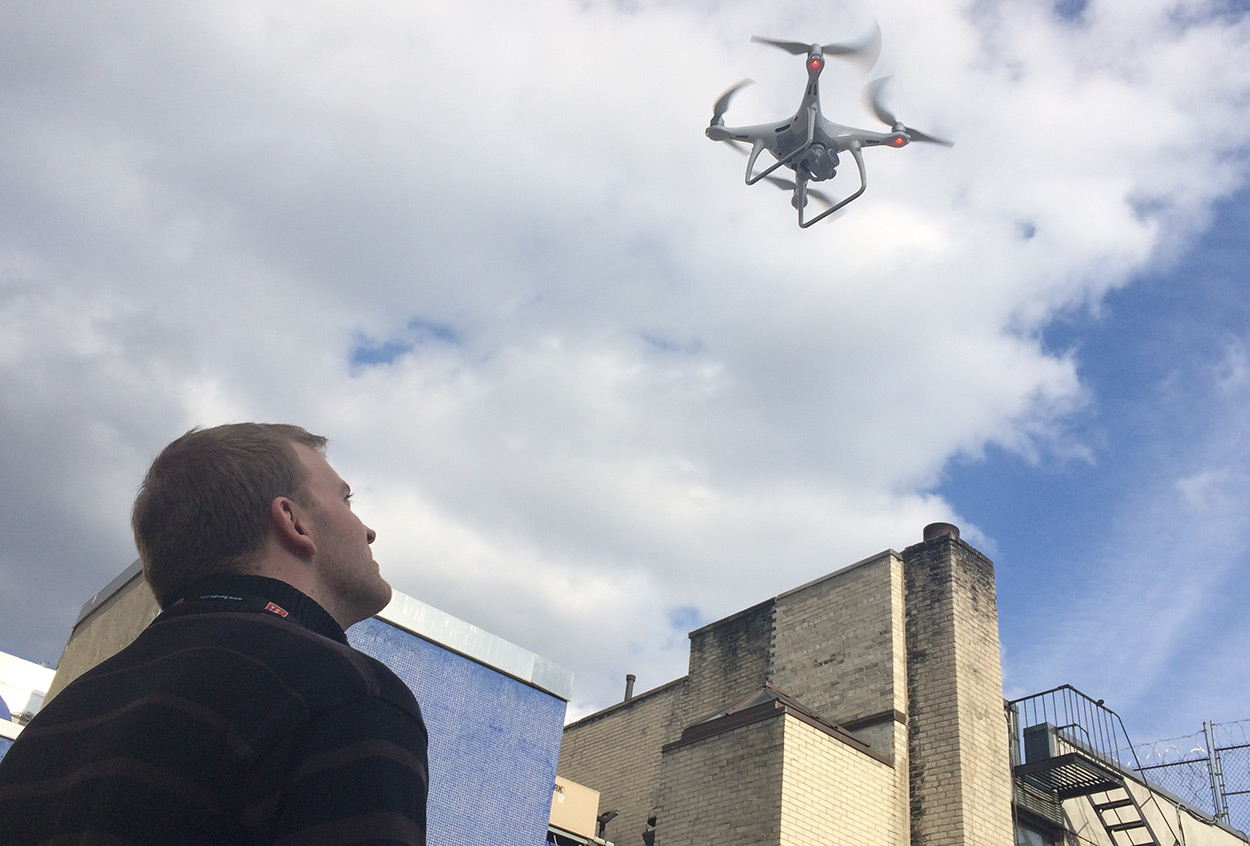 Unfortunately, I didn’t get to fly the Inspire 2. But since no one else did either, I’m guessing it probably was too risky for DJI. I also noticed that my controller screen was not the built-in one Michael Perry was talking about earlier, but an iPad mini. Not that that really mattered—any screen that shows me my very own New York City skyline drone shot, is a good screen. 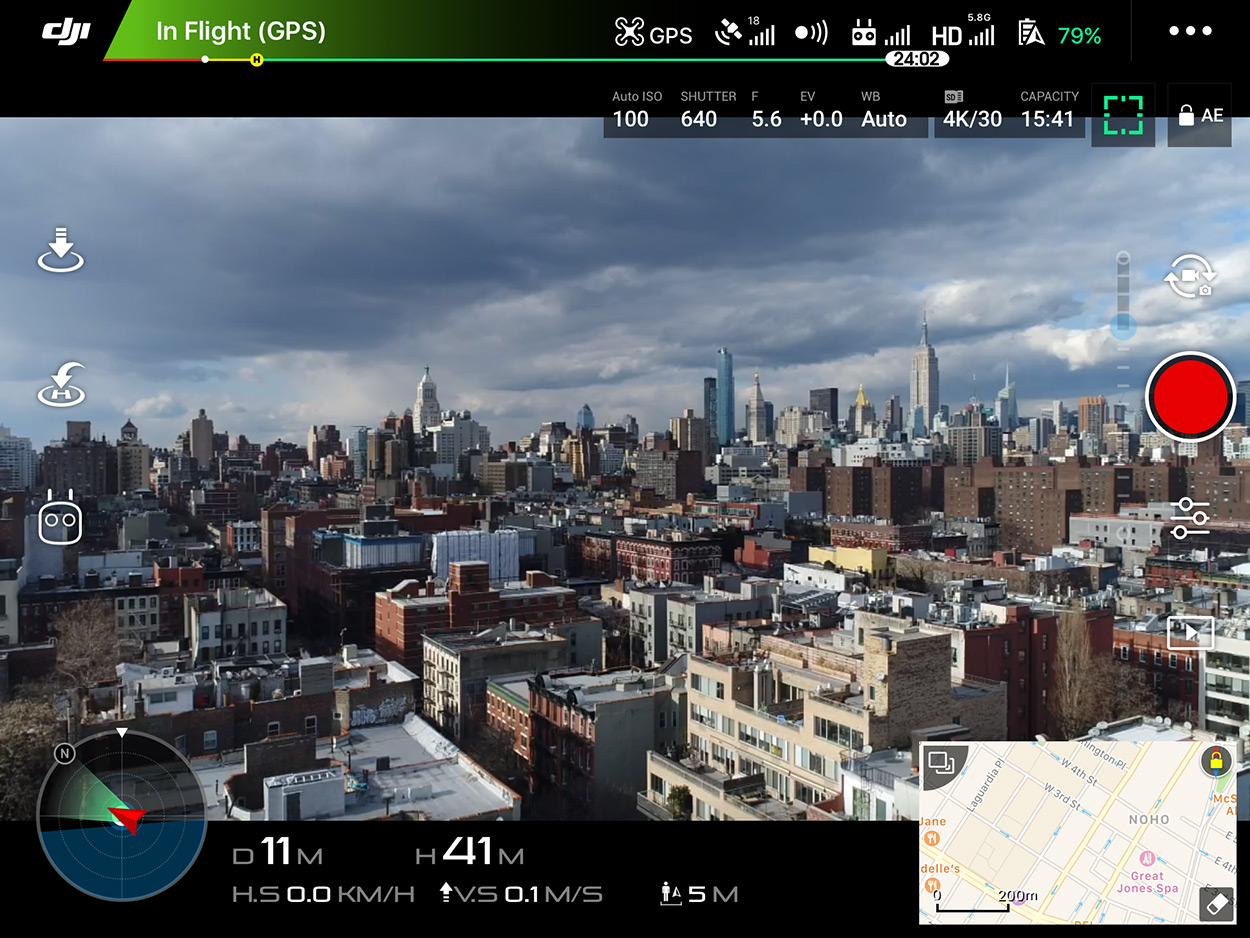 I took a selfie too: 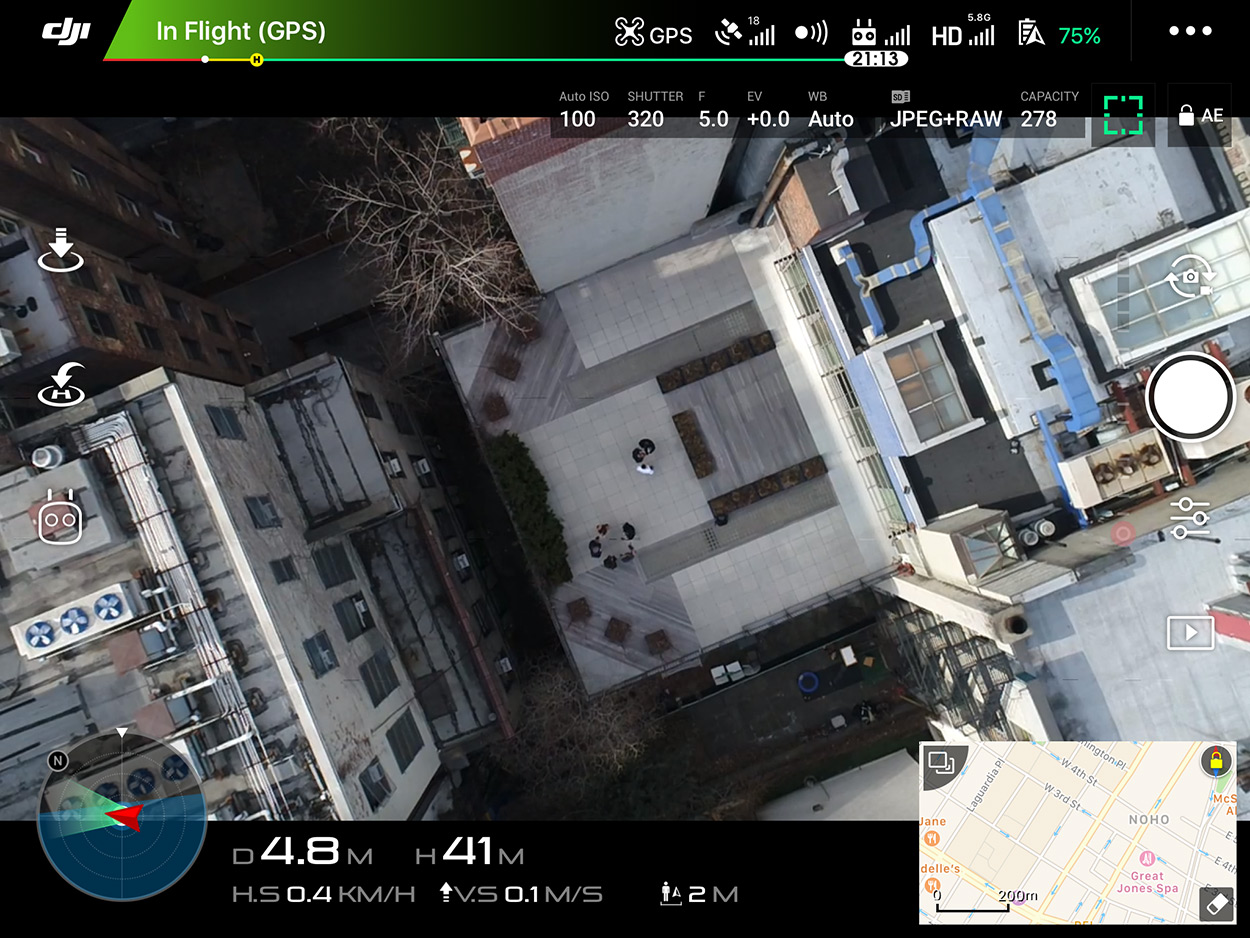 There were about a dozen vloggers present at this demonstration, so I’m pretty sure you’ll be able to find some video footage of the event on YouTube. I will surely be keeping my eye open for it, so I can relive my first flight experience.

I kind of want a Phantom 4 Pro now. Time to ask my boss for a raise.