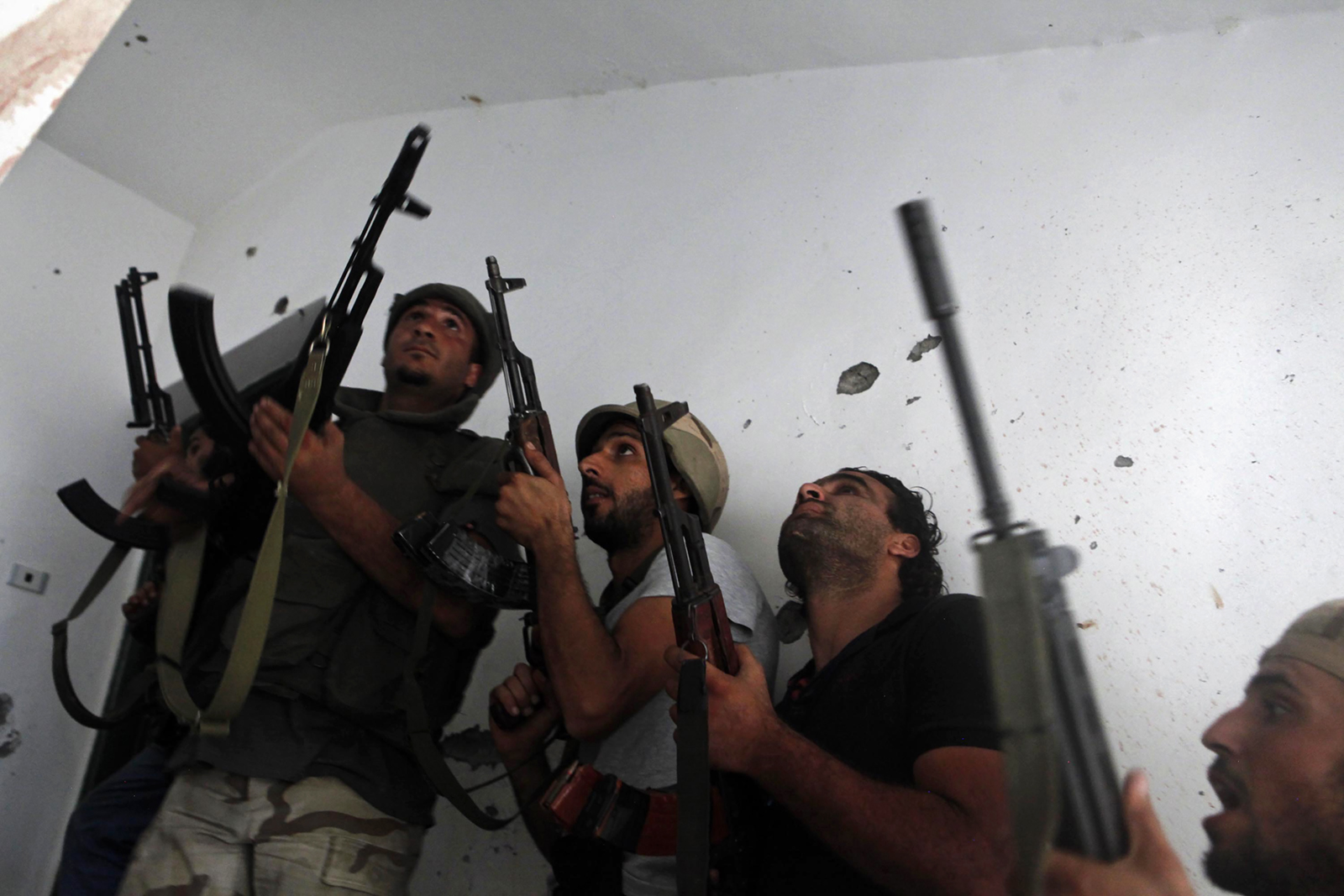 Libyan rebels fight in the streets for control of Tripoli. © Ron Haviv

Photojournalist Ron Haviv was only 23 years old when he first saw combat. He had no training, apart from the guidance of experienced photographers working alongside him. Since then, he’s photographed some of the world’s most violent war zones over three decades, been arrested more times than he can recall, and held prisoner on three separate occasions. His images have been distributed widely by numerous publications and showcased in museums and galleries, from the Louvre to the United Nations. He’s also a two-time winner of the World Press Photo Award, and among other achievements, cofounded photo agency VII.

The last time I spoke with Haviv was on a panel discussion at the 2015 EyeEm Awards & Festival, so I caught up with him to learn more about his life and career as a conflict photographer. 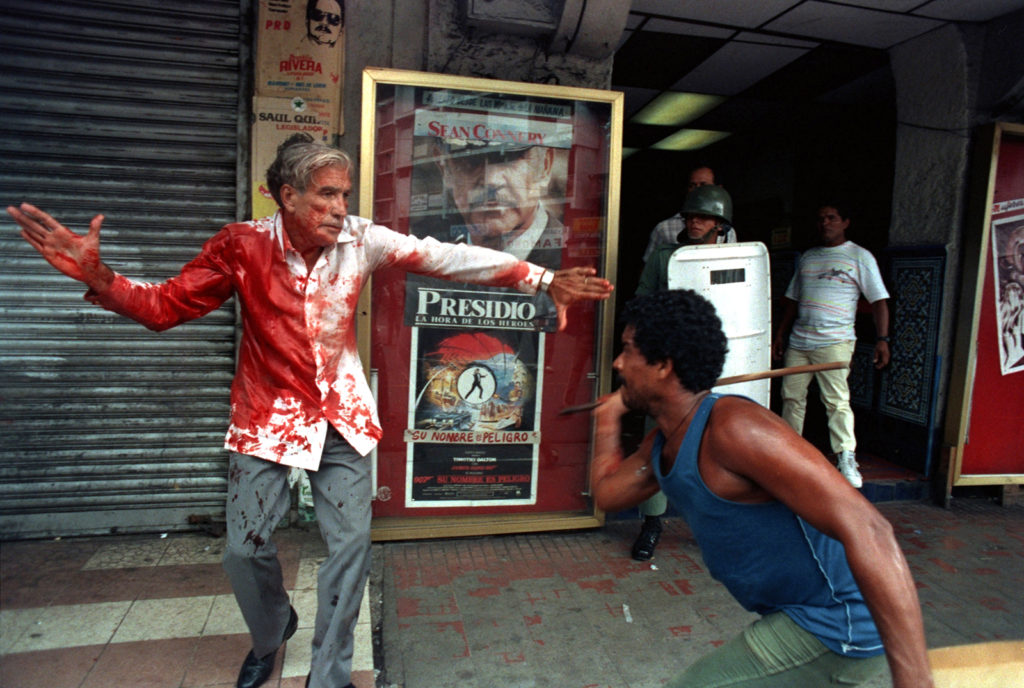 Supporters of Panamanian dictator Manuel Noriega attack elected Vice President Guillermo (Billy) Ford in Panama City, May 10, 1989. President George H.W. Bush used the photographs as one of the justifications for the US invasion of Panama when he addressed the nation. © Ron Haviv

Hey Ron, it’s great to speak with you again. You mentioned that you’re currently in India?

Yes, I’m in India. I have an exhibition and giving a lecture about my project The Lost Rolls. Are you familiar with it?

I’d love if you could tell me more about it.

It’s a project and book that came out late last year. Over the past 25 years, I collected over 200 rolls of film that weren’t processed. So I processed them and created this project, The Lost Rolls, which is a sort of major exhibition that intertwines memory and photography, made up of scattered bits and pieces from 25 years of work. The project has been very successful. We’re moving into another project, Lost Rolls America, where we’re asking members of the public to find a roll film they never developed. Fuji will then process and scan the film, and then [the photographer] will able to write about it—we’re creating a visual story, a national archive of people’s memories they once thought were lost, just because they never bothered to develop the film.

What kind of subject matter have you come across in what you’ve developed so far?

People are only starting to send them in now, so I haven’t explored the public’s film, but for me, it ranges from war zones or historical moments to personal work or personal relationships: girlfriends, family members, etcetera. There are a number of pieces where I actually don’t know where I am or who I’m photographing. That’s kind of the whole idea: discovering what I do remember, what I don’t remember, and what I do and don’t recognize. 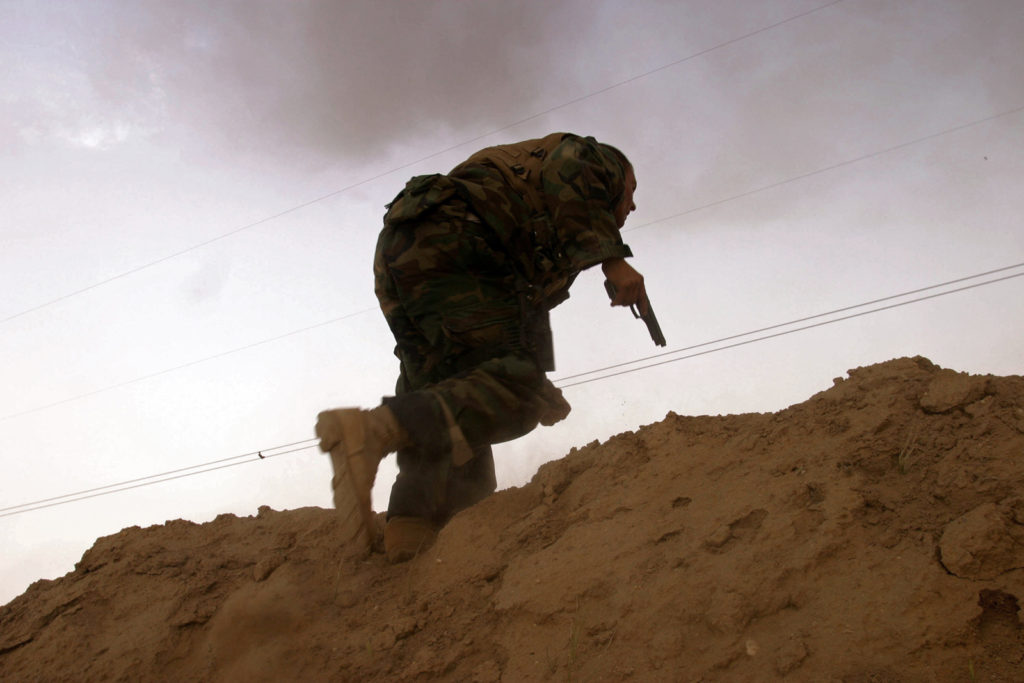 U.S. Marines Scouts from the 1st Tank Battalion open fire on an Iraqi tank after being amongst the first to cross the border to Iraq. © Ron Haviv

Speaking of war zones, how did you first start shooting conflict? How old were you on your first assignment?

The first major conflict or civil strike I photographed was Panama in 1989, where I was covering an election held by the dictator of the country. He was trying to prove to the world he wasn’t dictator, but actually led by his people. That was the first time I was around gunfire, people being killed, people being beaten, and so on. I was 23 years old at the time.

What level of experience did you have leading up to that? Did you ever go through any formal training?

I had absolutely no training, but I was lucky enough to go with more experienced photographers and tried to follow their lead. I had only been working as a photographer for a very short period of time. Really, I actually should not have been there. And I would not recommend anyone, especially today, to follow that process without any actual training.

So what would you recommend for a young person interested in covering conflict?

Almost every week, someone tells me, ‘I want to be a conflict photographer, I want to go to Syria, Ukraine, here, and there,’ which is all fine. I’m not saying that people shouldn’t go, but of course there are limitations and precautions. The first most basic thing, which pretty much applies to anywhere a photographer goes outside of their home, is to take a hostile environment course and get first-aid medical training. That’s now a basic requirement, given the world we live in. Even if you’re covering a feature story in a place like Cairo, you could wind up having something happen to you. By taking these courses—specifically the hostile environment one—it teaches you to think in a very different way. And sure, the hostile environment course has medical first-aid trauma built into it, but there are also separate medical courses being taught. Unfortunately, we’ve seen the deaths of a number of journalists, where they were unable to save themselves because they didn’t know how to. We’ve also seen a number of times where people that had taken these course have been able to save themselves, their colleagues, or even civilians around them. 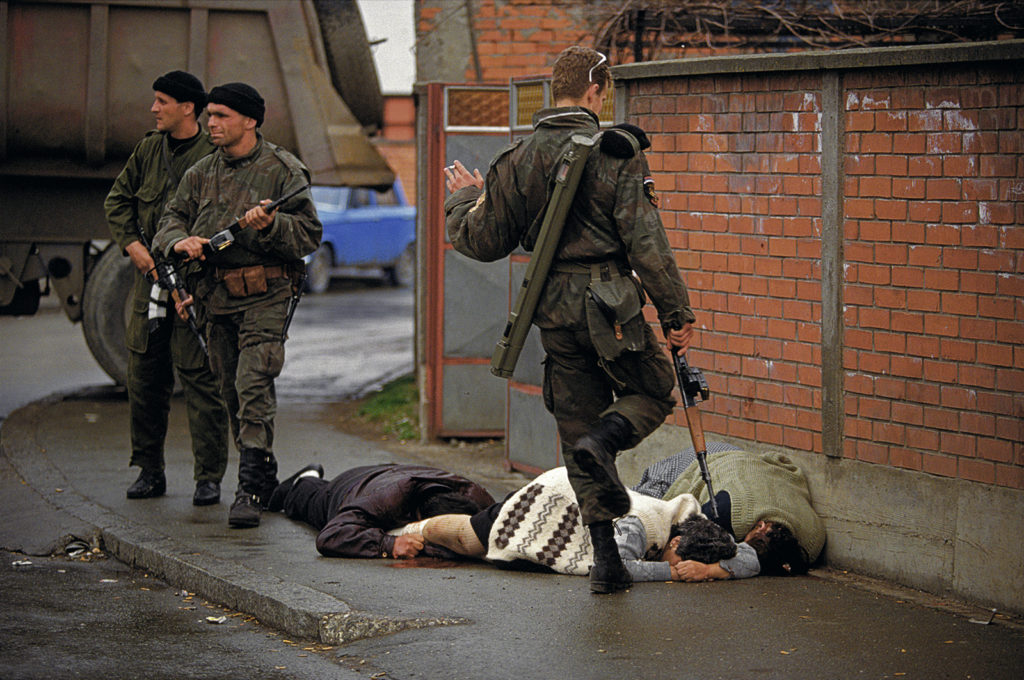 Arkan’s Tigers kill and kick Bosnian Muslim civilians during the first battle for Bosnia in Bijeljina, Bosnia, March 31, 1992. The Serbian paramilitary unit was responsible for killing thousands of people during the Bosnian war, and Arkan was later indicted for war crimes. © Ron Haviv

How do you emotionally prepare yourself for shooting conflict?

Well, there’s the before you go and the when you return. Until you’ve completely gone through it, I think it’s difficult to understand how you would react in a place under intense pressure, intense moments, and on top of it you have to work as a photographer or journalist. These courses try to mimic some of that, so they give you a little bit of understanding—they do mock arrests, they take you prisoner. Even though you know it’s coming, it can be quite helpful just to understand what your physical reaction might be, what it feels like to be locked in a room, and things like that, which are unfortunately becoming commonplace.

Then, of course, the most important thing is understanding what to do when you come back. How do you deal with the possibility of your post traumatic stress syndrome? Do you know who to talk to? Do you have friends? Colleagues? Is there a plan in place for when you return? Are you able to re-acclimate to your normal life? These are very important things, especially for people who are thinking about doing this continuously.

Have you ever been taken prisoner while on assignment?

I’ve been arrested more times than I can count and taken prisoner three times. Twice, governments had to be involved to negotiate my release, and once I was beaten and interrogated pretty heavily.

Can you tell me what you were covering when this happened?

Sure. The first time was the the First Liberian Civil War and the second time was with the Iraqi military at the end of the Gulf War in 1990. The final time I was taken by Serbian forces during the war in Yugoslavia. 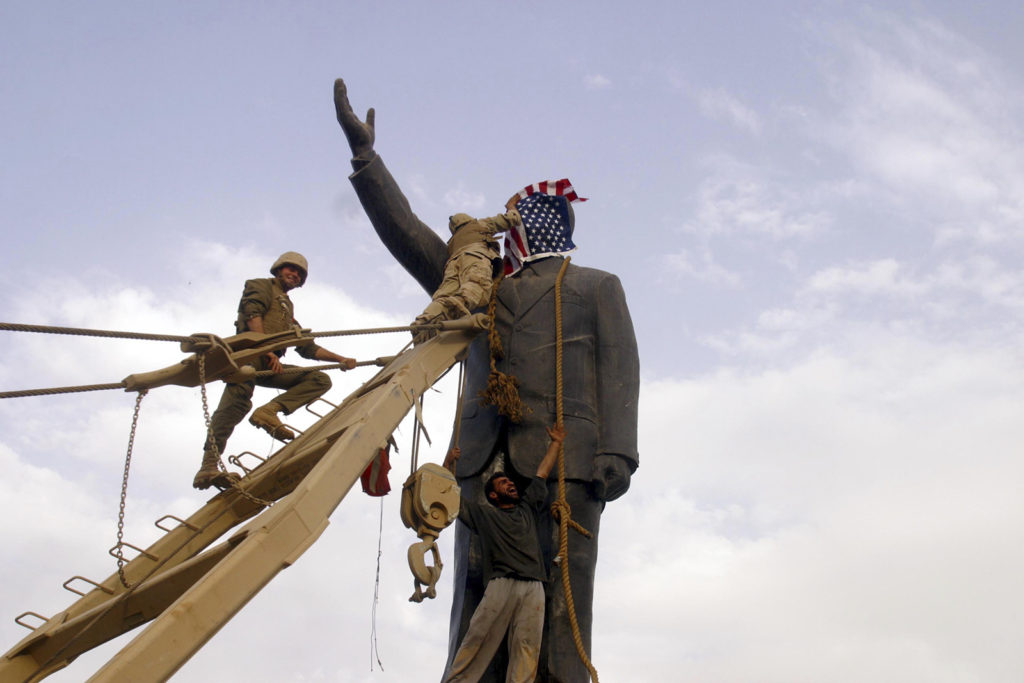 A U.S. Marine covers the face of a statue of Saddam Hussein with a U.S. flag before the statue was toppled in Baghdad, April 9, 2003. © Ron Haviv

So what’s your relationship like with the soldiers when you’re photographing conflict?

That depends, obviously on the soldiers themselves; whether they’re professional, US military, paramilitaries, or just “soldiers” because they happen to be standing with a gun in front of you. The relationships have a pretty dramatic range. One of the things I’m always concerned about as a photographer is making sure that nobody is taking any action based on me being there—that nobody is going to try to show off for the camera. This can happen. There have been times where I’ve seen soldiers trying—or attempting to try—things because they see that I’m there. Then I very quickly put my camera down and say, “I’m not here to take Rambo-style photos of you,” and so on. Most of the time, that’s enough.

It’s a very important responsibility as photographers in these dramatic, dangerous, and often life-threatening situations to not encourage any kind of activity. But at the same time, your life is in the hands of these soldiers, and they could be protecting you when you go to battle. Obviously, you’re on their side, and there are times when they’ll give you cover fire from across the street and things like that. It’s very important, especially when you’re on a side that you don’t agree with, that you grace yourself to a point where you’re you don’t cross an ethical line. However, you also can’t sit there and argue politics with people with guns in the middle of battle.

I’m glad you brought up ethics. I’m wondering if there’s a personal set of guidelines that you always follow?

The first one, as I said, is to never influence a situation or make anybody do anything for the camera. The second is that if I’m in a situation where war crime is about to happen, and I have the ability to stop it without getting myself or the other people involved killed, I do so. If I’m unable to do that, which often happens, then I try to make sure there’s at least documentation of what happened, so people will know about it. 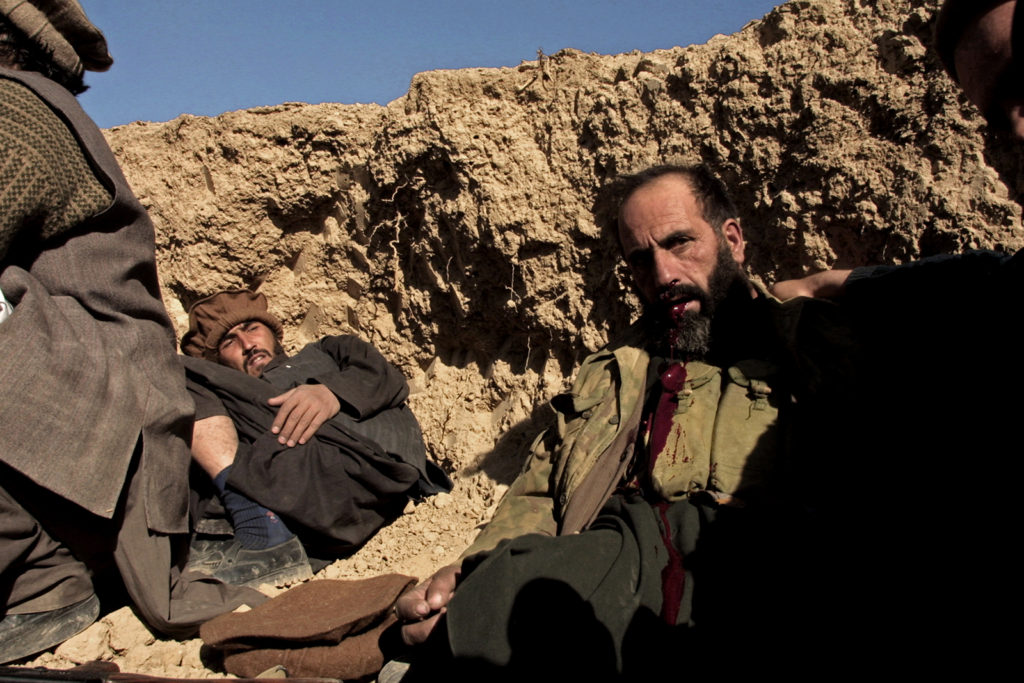 A Northern Alliance commander lays dying after being shot by a Taliban soldier in a battle outside of Kabul during fighting in 2001. © Ron Haviv

What is your main goal with your work? What message are you trying to send by covering conflict?

As cliche as it might seem, the idea of giving a voice to the voiceless is still a main component in the work I do. While it’s interesting at times to be with a soldier, what I’m more interested in is the impact their actions have on civilians. Civilians are often the ones who carry the brunt of what happens and the ones the world needs to know about. So for me it’s about telling the story of the civilians, trying to get that information out there, and making sure that the work is a part of the conversation when politicians and the public are deciding on anything from aid to political pressure, or even sending in more troops to stop the fighting. I think journalism and specifically photography, because of it’s power and universality, can play a very powerful role in that. 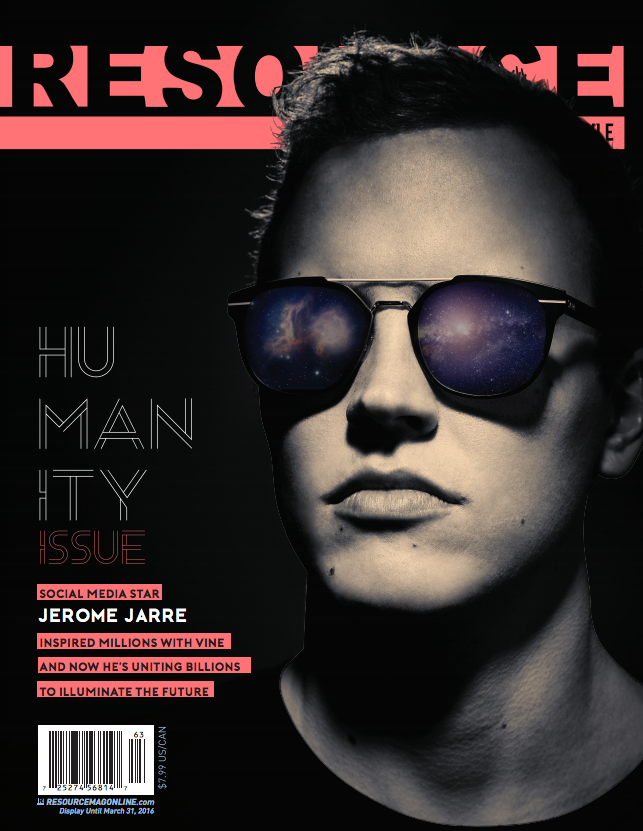 This story was originally published in the Fall 2016 “Humanity Issue” of Resource Magazine. Visit the Resource Shop to pick up a copy.